We heard something going on in the Old West section of the park. It was their 3 pm gunslinging show. Or, at that point actually, the pre-show. This involved several of the park performers, including the guy who'd play the hapless sheriff in the show, doing small bits of clowning around. Like the guy who'd play sheriff holding out a collapsible chess board, to have it collapse, and need help tidying things up. That sort of silly comedy.

The show, when it started, presented itself as the deputy (the lone woman performing) grumbling, out in the street, about the sheriff. And trying to coax him out of his office. Here we got to wondering just how much of this was scripted. It was comic, of course. But parts of it sounded improvised. The sheriff started talking about how he couldn't come out because he was having trouble putting on his pants. He said something about how he needed the help of two horses to put his pants on. The deputy asked him exactly how. He started saying how they would stand him on his head, and the deputy asked for more details and you could hear where the sheriff didn't know where he was going with this. It was fascinating to listen to. Later, after the sheriff came out for a few moments, he said he had to go across the street (from the Sheriff's office to the Golden Nugget, a restaurant) to put on some pants. ``Why do you need to change your pants?'' asked the deputy. ``Didn't say I was changing my pants. I'm just putting another pair on.'' With this weird, possibly improvised line, the performance made

bunny_hugger burst out laughing and she never stopped liking it. She's still, weeks later, occasionally grinning about the line.

Pants would become a bit of a recurring theme for the show. The premise leading up to the gunfight was that a trio of bank robbers were coming into town, figuring they could easily take things over considering the deputy was a woman and the sheriff was, well, the guy with the collapsing chess board. Catch is near the end of the first at, one of the bank robbers squatted down and ripped his pants in what did not seem to be a scripted wardrobe problem. Can't blame the performers coming to the brink of cracking up there.

So, I noticed before the show that there was a heap of mattresses near one of the buildings, with a 'PLEASE KEEP OFF THE MAT!' sign that one of the performers removed from the top just before the show started. But when the first act reached its conclusion, with surprisingly loud caps being fired --- very near in our direction, because of where

bunny_hugger and I stood compared to the actors --- I forgot about that and took the bank robbers' retreat to be the conclusion of the show.

So after a few minutes, many of which seemed to be spent with the robbers working out whether the torn pants needed particular action, they went to the second half. Here the robbers beat up the hapless sheriff. The deputy tries to bring them in. The sheriff comes back in costume as a grizzled old miner or something. And they get to the dramatic shootout. This includes --- just like you see in old books about amusement parks with Wild West shootouts --- one of the robbers climbing up to the roof of the Golden Nugget, and, as the final robber shot, twisting and falling off the roof, onto the mattress. Good stunt, and a fun show all around.

While the many amused kids gathered around to take an oath of behaving like good kids from the sheriff we walked through, over to the kiddieland area. The park had a bunch of props with fairytale or fairytale-adjacent themes. The Yellow Brick Road, mentioned earlier. A Jack and the Beanstalk figure. An Alice in Wonderland prop where Alice is outgrowing the house she's in. A whale's head that we thought at first was another weird amusement park appearance of Moby Dick (as seen at Storybook Land in New Jersey). No; this was Pinocchio, with the wooden man, Geppetto, and the cat inside the whale's mouth, behind a plexiglass screen so the photographs are lousy.

And we got to see the park's newest roller coaster, Dragon's Flight. So new a coaster that it's not even installed yet. It's on the park's maps and their brochures as the new ride for 2019, but they didn't have any of the track or the loading station installed. That's all right. It's a small roller coaster, a Dragon Wagon such as you see at many carnivals and small amusement parks. It's designed to be set up in, like, twenty minutes. They just hadn't finished installing yet. This is two years in a row that we've been to a park with a roller coaster too new to have installed. (Lakeside Park in Denver last year had a Pinfari Zyklon assembled but not ready to ride when we visited. That ride, remarkably, still isn't running, or apparently even named, so we don't have to feel bad about not waiting two weeks last year to visit when the roller coaster would be open.)

The Roller Coaster Database, citing some promotional video, thinks this ride is the Dragon Wagon which had been at Indiana Beach, which we had seen and wasn't running last time we were at that park. This is possible. Plausible, even, since Indiana Beach and Fantasy Island are both owned by Apex Park Group. What has me skeptical is that we could see the train at Fantasy Island. It's a dragon with red scales, and the back of the ride says 'Beauce Carnaval'. The Roller Coaster Database's pictures of the Indiana Beach Dragon Wagon show it having green scales. And while it's possible the Dragon Wagon was at Indiana Beach for years without its former owner's name being taken off the back --- especially as Indiana Beach was for years owned by people who had no interest in or ability to run an amusement park --- it seems ... weird. (On the other hand, Casino Pier in Seaside Heights, New Jersey, had a ride with the Cypress Gardens logo on it for years.) So what is the truth? There is no way to know. I suppose we have to pop in to Indiana Beach and check if they still have their Dragon Wagon.

Oh, and there was one more roller coaster. A kiddie coaster, a Wacky Worm-style little one designed to batter the knees of adult riders. This one's called Max's Doggy Dog Coaster, and the front car has a Dalmation's head on it rather than a worm. We were a bit hesitant to ride, unaccompanied by kids as we were. But the ride operator didn't mind. The ride operator might have been a little bored waiting through the slender crowd and occasional rain. We got two circuits, enough to appreciate things like the flower-bell-shaped ride lights and how close the ride comes to the trees in some parts. And the giant daisy props outside the ride's enclosure. It's a fun ride, and it didn't smash our knees too badly.

And of course it was raining again. Not enough to close the park, but enough to make us feel cold and a bit lousy, after not quite two hours there. So we figured to go out to the car and get our rain jackets. Well, my rain jacket and

bunny_hugger asked if maybe we should stop in the gift shop first, before we go out, and buy any souvenirs we wanted. I said nah, there'd be time for that near the end of our day.

Bonus fun activity: see if you can spot the single dumbest thing that I said during our parks trip.

Trivia: The now-standard telephone number keypad, named ``right-reading 3-by-3 plus one'' during tests in the 1950s, was neither the fastest nor the most preferred of touch-tone dial arrangements Bell Labs experimented with. (It was the layout that best fit available space and electric circuits in the phone case.) Source: Small Things Considered: Why There Is No Perfect Design, Henry Petroski.

PS: Reading the Comics, July 2, 2019: Back On Schedule Edition, wrapping up a slow week's worth of comic strips.

PPS: more looking around the pyramid. I still find it all gorgeous to look back on. 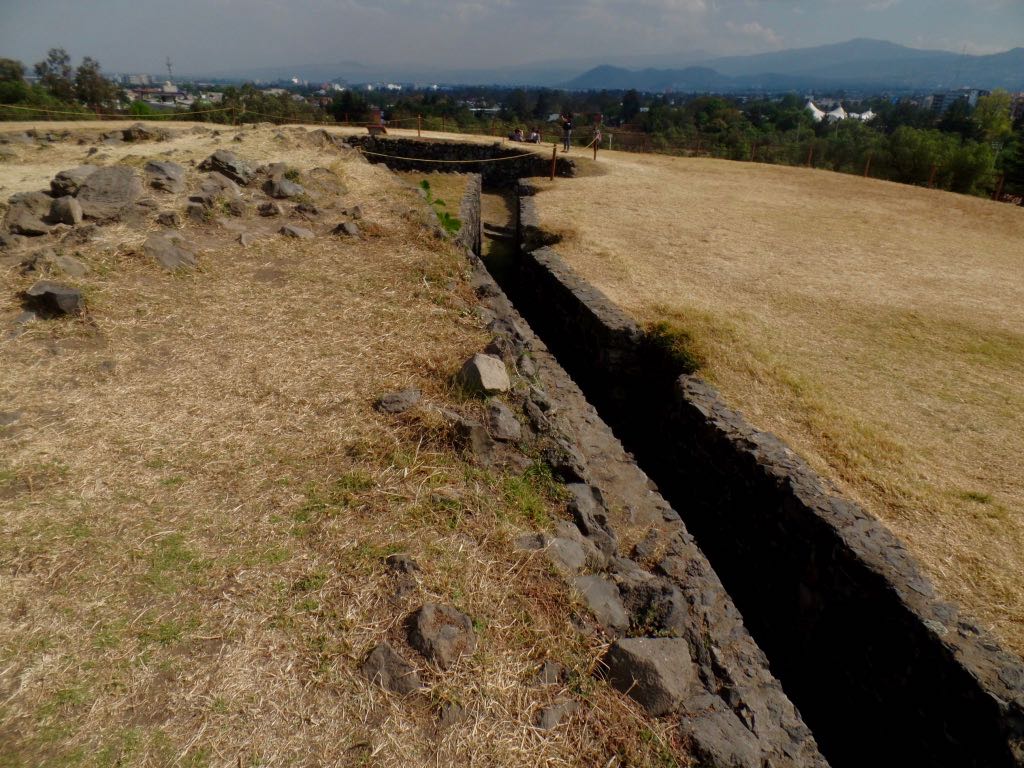 The channel cut in the top of the pyramid as it leads to the altar area. The sun angle really helps make it look like the place is filled with void. I don't know what those white mountain-peak structures in the middle background on the right are. 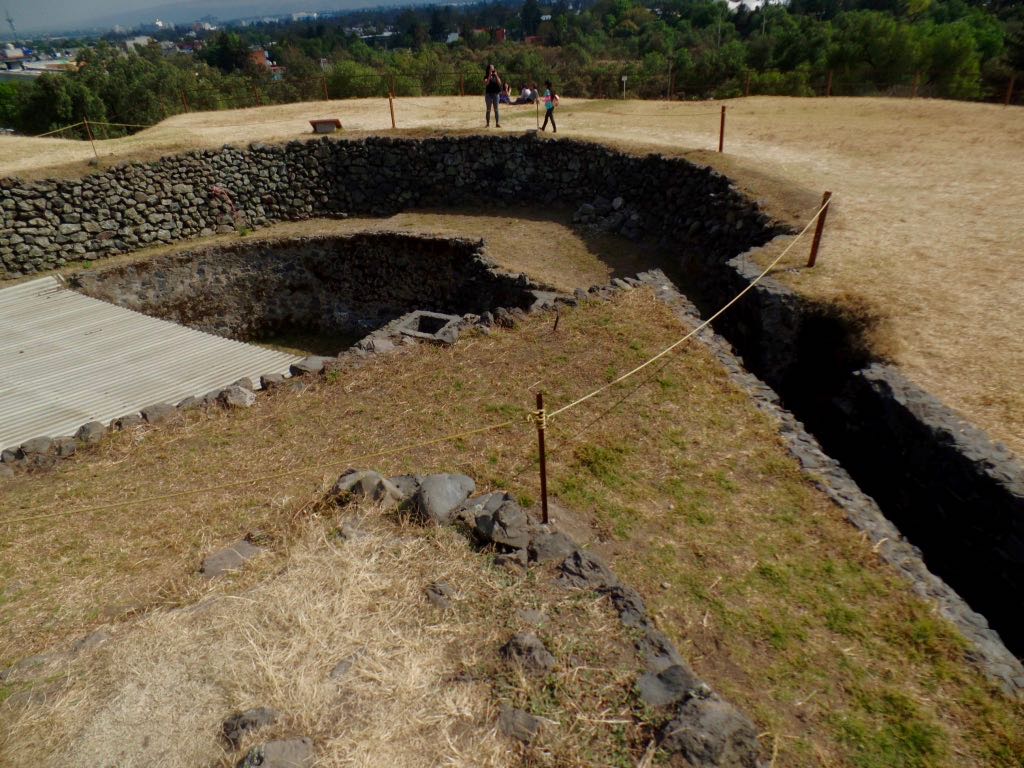 Looking again at the altar area, this time from an angle that showcases how there's several levels to that. 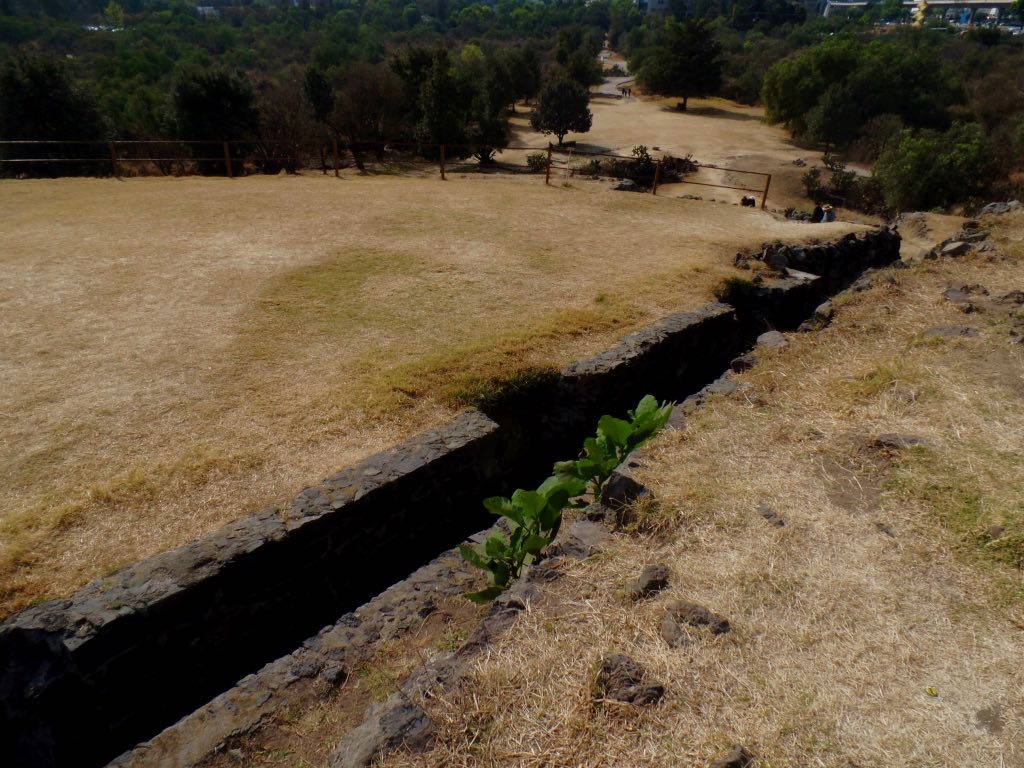 A longer view of the channel, including the spots that look like they're insets to make it possible for people to scrunch against the all and let someone pass? Hard to say. The channel is maybe four feet wide most of its length.