Had we woken a little earlier Sunday we might have got to the hotel's continental breakfast. We weren't going to wake a little earlier. But then I remembered: oh yeah, I could just grab some stuff and bring it back to our room to eat. And then I had another great idea. I put a couple of the rubbery scrambled-egg patties on the bagels they had, and from this made an egg sandwich which is going to be my new hotel-continental-breakfast option. It wasn't good, exactly, but it was better than the egg on its own or the bagel with a block of rock-hard cream cheese badly smeared across it by plastic knife would have been.

In the last couple twisting roads leading to our amusement park target we saw a rabbit. A wild cottontail, hopping towards the road.

bunny_hugger cried out to it, no, go back, don't go in the road. The rabbit complied, hopping back into the suburban woods. A good omen, surely.

Our park for the day --- and the reason we took this trip rather than any of the others --- was to get to Seabreeze Amusement Park. It's an ancient park, tracing its opening to 1879. It's one of the handful of remaining trolley parks. Trolley parks were built at the end of streetcar lines, often built or owned by trolley or electric companies so as to provide something to use their product during evenings and weekends. Your town probably had one, and it closed in 1921, 1933, 1958, or for a lucky few, 1976. Or your town is Pittsburgh and the park Kennywood, or Rochester and your park is Seabreeze. (I exaggerate; but Wiipedia is of the opinion something like thirteen trolley parks still remain.

bunny_hugger and I have been to nine of them together.)

A 140-year-old park would be enough. It also has the Jack Rabbit, a roller coaster opened in 1920. Seabreeze claims it's the oldest continuously-operating roller coaster in the world, cutting off Lakemont Park's Leap the Dips thanks to the long periods when that ride stood without running or being operable. It's one of two roller coasters still named Jack Rabbit, a name which in the 1910s and 1920s was among the default names for roller coasters. The Roller Coaster Database lists 39 Jack Rabbits as having existed; Kennywood and Seabreeze have the only ones still running under that name. (Clementon Park, in New Jersey, used to have a Jack Rabbit; it closed in 2002 as part of the park's great decline. Its replacement, now called Hellcat, was originally named J2, short for Jack Rabbit 2.) It's in the three-way tie for fourth-oldest still-operating roller coaster in the world. Its fellow 1920 roller coasters are the Scenic Railway at Dreamland, in Margate, UK, and Jack Rabbit at Kennywood.

The parking lot outside the front entrance seemed small. There are more parking lots --- we drove past some, on the last approach, after seeing that cottontail and after passing an estimated 12,564 traffic circles --- but they wouldn't be needed. Seabreeze forecast a slow day. It had been cold. It was very likely to rain. They had, the day before, given up on opening the water park for Sunday. But the only way we could see Seabreeze at night was to go on Sunday. It wouldn't be much night: the park would close at 9 pm. But this was later than it would be open any weekday. Had we given in to the weather, and postponed our trip a week, we would have had more night chances. But Canada's Wonderland and Seabreeze were the only parks we figured we really wanted to see in that twilight glow and illuminated by night. And, hey, a slow day at a park implies good riding chances, too. When you're a roller coaster enthusiast travelling from far away, you want a park to have a slow day just the day you visit. Not the rest of the time.

So the parking lot seemed small, and was empty even for that, although we were there just about at the moment the park opened. They already had the sign out front with the rain check policy. It was not raining, not just yet. But it head that morning. And the sky was a uniform grey. It looked ready to rain any moment.

There was a bright fellow out front, though, watching the gate and helping people through the turnstile or through the gate that's the wheelchair-and-crutch-accessible alternative. We got our tickets, at a small discount, thanks to it being so early in the season, and stepped in, and immediately liked the place. Almost the first thing we saw in front of a flowerbed was a sign labeled ``On This Site --- Through The Years''. It showed photographs from the park in the mid-60s, and some earlier eras in photo insets, and explained some of what used to be there. We like any park that is also a museum about itself.

Jack Rabbit was the first thing we wanted to do, and the most important thing we wanted to do. We wanted to see the whole park, but the 1920 roller coaster was the priority. It's quite near the entrance. Then I got distracted by another ``On This Site --- Through The Years'' sign. It listed eight roller coasters now gone, and had five photographs showing six of them. One of the gone roller coasters was the kiddie coaster, since replaced by Bear Trax. Bear Trax is not open to unaccompanied adults, so we did not have to worry about whether we'd choose to ride a small, surely knee-banging roller coaster. But the sad thing is what it replaced, a steel kiddie coaster from the Allen Herschell Company. That roller coaster was named Bunny Rabbit. The perfection of that as a name, especially sitting across the midway as it does from Jack Rabbit, is almost too much. And, granting that the original Bunny Rabbit maybe needed replacement, but why not put the fantastic old name on the new kiddie coaster?

My distraction, and the small crowd size, misled

bunny_hugger into thinking Jack Rabbit wasn't open yet. When I learned that was what she was waiting for I explained that no, I'd seen people just getting off the ride, right before we got to agreeing that Bunny Rabbit was a great kiddie coaster name. So here we went to our first ride of the day, and the most important roller coaster of the park.

Jack Rabbit is 99 years old. The cars are not. The current train is sleek and stylish and has looks great. But it has some modern features like a seat divider and seat belts and individual restraints. So we can't ride it the way it originally opened, which would surely have been a single seat, no seat belt, and possibly not even a bar that locked down. It might have run with just a bar to grab on, and a warning to not stand up during the ride. There may be other things that have changed from the ride's original configuration. 1920 is about the time of the invention of upstop wheels. The wheels of a roller coaster hold on both above and below the track, making it all but impossible for the thing to fall off. (Some roller coasters hug the track with a different mechanism but the point is the same.) Quite likely when this ride opened, though, the train only rolled on top, the way a real train rides on real tracks, and all that kept it on the track was that it didn't go so fast as to threaten to fly off. The train was partly destroyed in a fire in August 1923 and rebuilt. Would they have missed the chance to not exploit the upstop-wheel technology, and its prospect of faster rides and steeper drops and bigger hills?

This is not to deny its historic nature, though. First, a thing modified by long use is still historic. Second, it still dispatches, and brakes, by the use of levers, the classic old-fashioned way. Electronic controls are all but universal, and for good reasons, as they make accidents harder. But the ride operator grabbing and sliding a network of mechanical controls? This is beautiful, and great to watch.

Our first ride on Jack Rabbit was not a solo ride, but it was close. We would get several rides on the roller coaster, never alone, but also never having to wait. The roller coaster is a simple one, as you'd expect from it being a 1920 model: climb the lift hill, go out into the woods, turn around and come back, with hills of varying sizes along the way. The trees around it have grown tall, threatening to touch riders. It's a great ride, exactly the sort of old wooden roller coaster to appeal to me and

bunny_hugger. Plus, the launch station has a fantastic sign. I've got pictures, but if you don't want to wait, you can see it at the roller coaster's Wikipedia page.

Oh, also. Most of the station is reasonably recently painted and fresh-looking. There is a part that is not. They have a plaque explaining this. The park, like most, has gone to pay-one-price. But there was a relic of the pay-per-ride days. On one of the beams of the station, as you enter, is the instruction ``PAY AS YOU LEAVE''. The instruction is from around 1920, they believe. It's badly faded. The plaque says they couldn't bear to paint it out. The only baffling thing: wait, you only paid for the ride on exiting? ... What did they do about Charlies on the MTA? And, alas, the sign doesn't tell us anything. The park explains much about itself, but it does not explain everything.

Trivia: The last formal geology briefings for the Apollo 11 crew were in mid-April 1969. Source: Where No Man Has Gone Before: A History of NASA's Apollo Lunar Expeditions, William David Compton.

PS: So at La Feria, we were simply trying to get to the biggest and most prominent roller coaster, and ride, at the park, by the strategy of walking toward it. How hard could this even be? 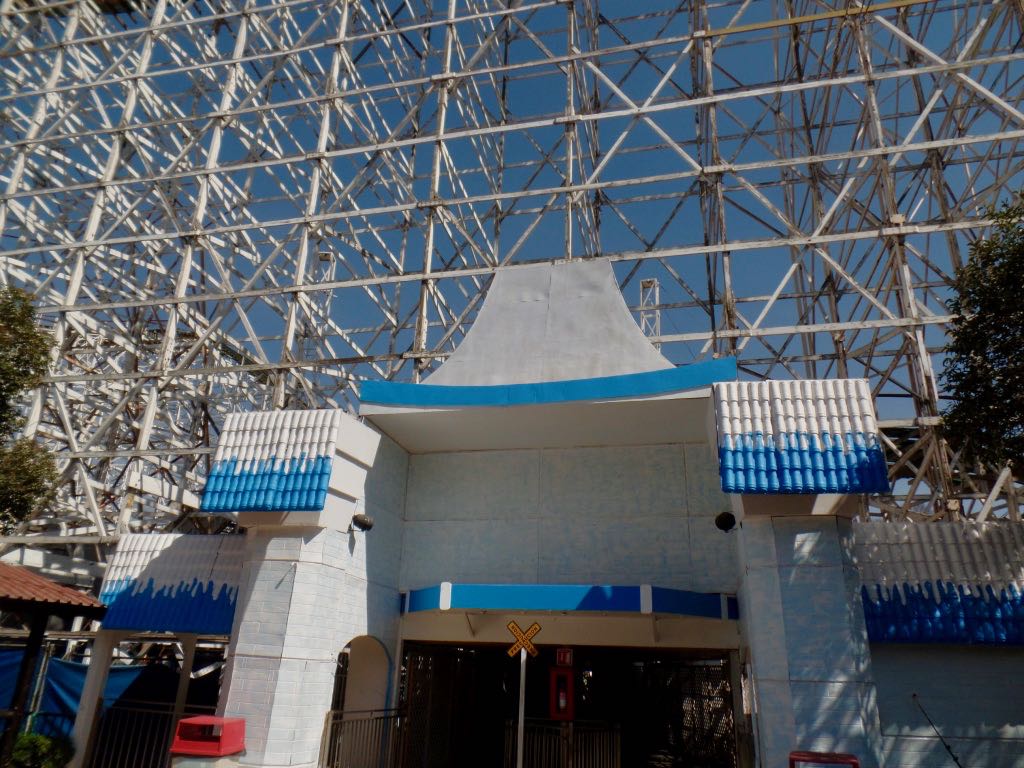 All right, so the entrance to Montaña Rusa wasn't through that underpass built into the roller coaster. But wait, here's another underpass and surely the entrance is in there? 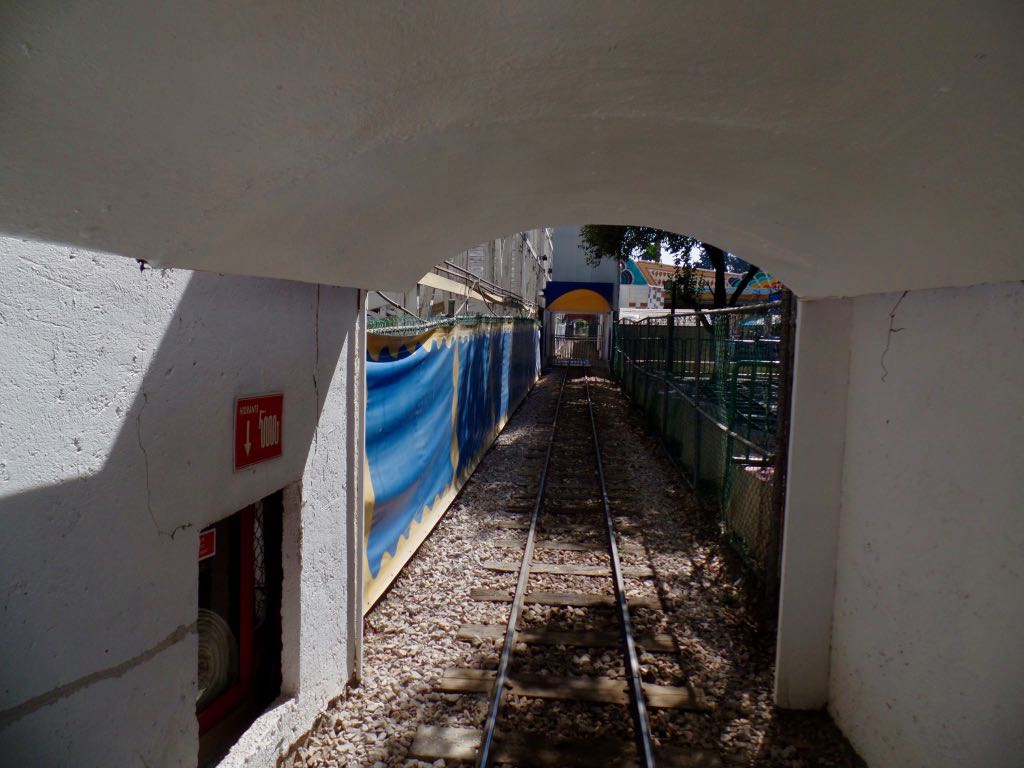 ... Pfaugh, all right, it's a miniature train ride that runs underneath the roller coaster and that's great but it's not getting us any closer to the entrance. Still, we're by the lift hill, the station has got to be nearly in view already so let's just see ... 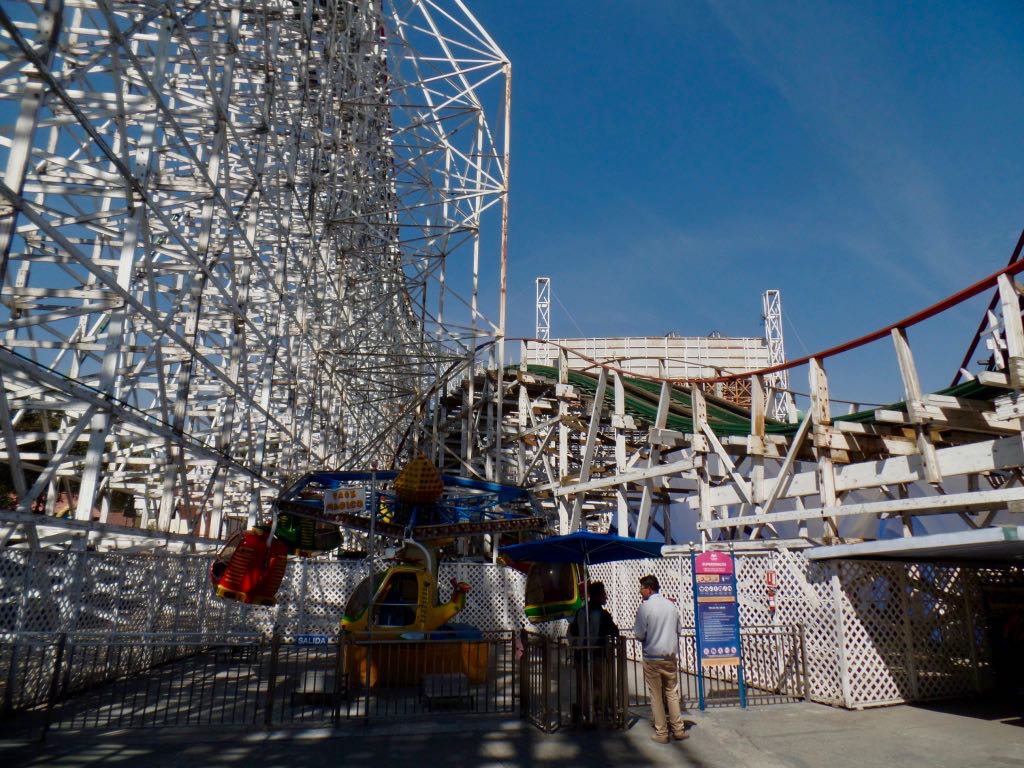 Oh for the love of Mike ... all right. But, lift hill and some of the return leg of the roller coaster, with a kiddie helicopters ride tucked in-between in a wonderful use of space. We're surely close!