Tuesday was our day for driving home. We got up as close as we felt we could to the motel's check-out time. And even ran a little bit late of that, but we've learned that hotels aren't all that uptight about it. Small motels run by what looks like just an elderly couple, with keys that are still physical keys on diamond-shape keychains with postage guaranteed if you drop a lost key in the mailbox, especially so. One minor delay: I couldn't find the ice machine, if they had one. We had plans to buy some Canadian candy, and we had an insulated cooler bag, but any ice we could put in would help.

We crossed back into Canada, not using the Rainbow Bridge from one Niagara Falls to the other. We'd wondered some how the customs officer would react to our just intending to use Ontario as a shortcut. After he asked where we were from he prompted, ``just driving through?'' and, yeah. Turns out we're not the only people who do this.

A little into Canada we stopped at a rest area for one last Tim Horton's breakfast with their BeyondMeat sausages and all that. It turns out both of us thought, briefly, about going to a nearby supermarket to stock up on candy bars, but neither of us said so. It was a minor traffic nightmare getting back to the highway from that anyway.

A more major traffic nightmare: so there's this highway in Hamilton, Ontario, that's closed. And my satellite navigator does not have the concept of ``detour''. Or if it has I never learned how to communicate that to it. (I got the navigator for free, when my sister didn't need it any more, but it means the manual was long lost.) And we did not recognize the detour signs. So I got to improvise my way around the surface roads of Hamilton, Ontario, trying to parallel a highway I'd never seen before and that was stripped down to the dirt beneath, while the satellite navigator was having a fit over my refusal to just go to the highway. This surely added at least an hour to our driving. We had stuff to listen to: an episode of Simpsons snark podcast Worst Episode Ever, which somehow ran two and a half hours and that has an even longer edition for people curious what they cut from it.

Eventually, finally, I got out of the Hamilton Highway Construction Vortex, but of course I will never actually be out of it. My car and I are still trapped wandering the streets of Hamilton. But I did learn how to read the detour signs, at least.

Besides Hamilton, though, the drive was fine enough. We stopped eventually at a rest area. This would be where we stocked up on candies, which we've been eating one at a time during coffee time since. We're not finished yet. We picked this rest area as a stop for just the reason you'd expect: there was a letterbox at it. This letterbox was at a picnic area we were not actually positive was there. But it turned out no, there was. We just had to walk farther than we had wanted. There was a parking lot next to the picnic area. We could have almost driven right up next to the letterbox. Someone else did drive up to the picnic area briefly and I hope we didn't mess up their letterboxing plans.

Just before reentering the United States we diverted to the duty-free shop.

bunny_hugger had fond memories of having a maple-flavored cream liqueur years ago and hoped to find a new bottle. In this we were successful. We also picked up some rum as a gift to MWS, who very much envied our roller coaster adventuring. Also we thought long and hard about some of the plush dolls they had. They had a lot of beaver and moose, of course, and a couple raccoons. And more jackalope plush than you would figure for the vicinity of Port Huron, Michigan.

The US customs officer seemed grumpy that we had been out of the United States, as they always do. The two-or-so hours drive from the east end of the state to Lansing were easy enough, though. We did think briefly about one last absurd thing, diverting to the C J Barrymore's Family Entertainment Center, which put in a small roller coaster recently. But at that point I thought, we've done enough. We should get back home.

Home was standing, intact, in good order if a little bit stuffy after the place was sealed tight for a week. It had been cold and rainy,

bunny_hugger could tell, from how well the pansies out front had grown. Trivia: In Athens of about the fifth century BCE the name of the eighth month of the year was Anthesterion. Source: Mapping Time: The Calendar and its History, EG Richards.

PS: exploring some more of the rides at La Feria. 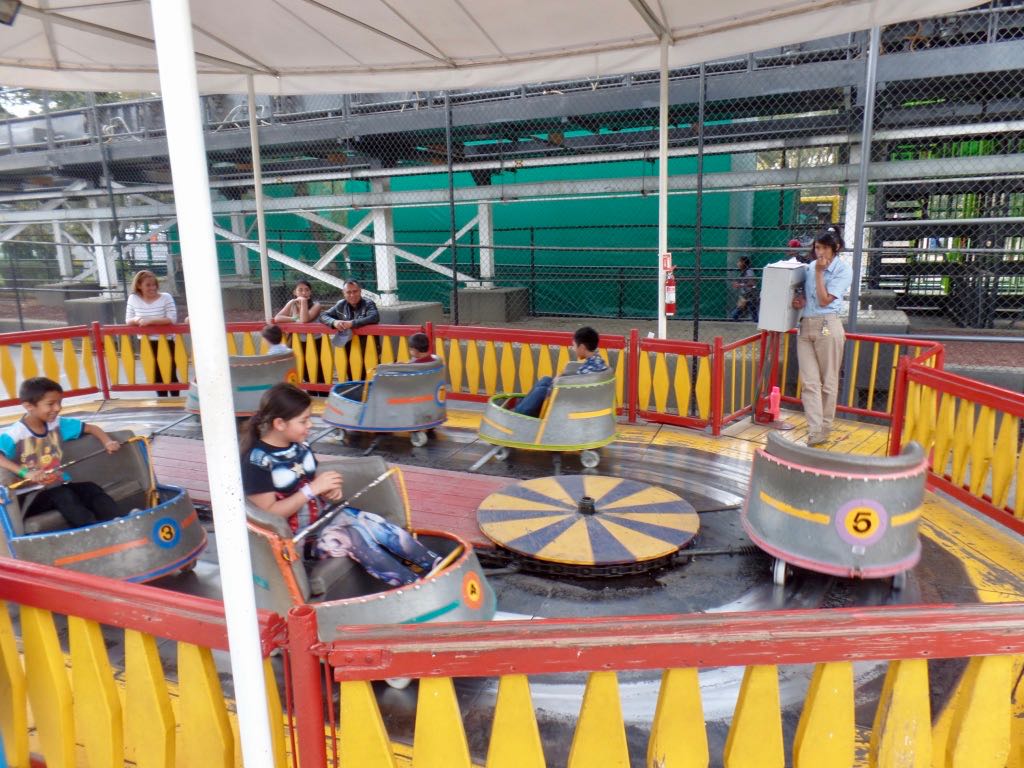 Doesn't that Kiddie Whip look like fun? I'm sorry that nobody seems to make a modern version of the ride. 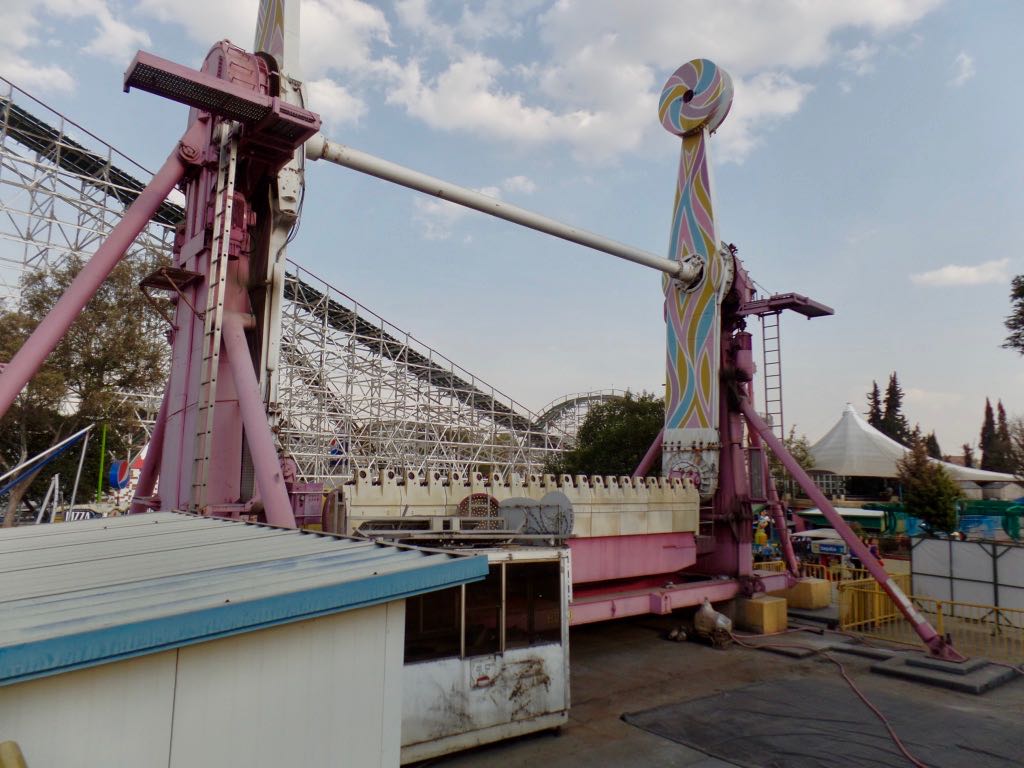 Top Spin ride at La Feria, which I don't think was running during our visit. We're seeing it from the back which is why it doesn't look like it's in terribly good shape here. 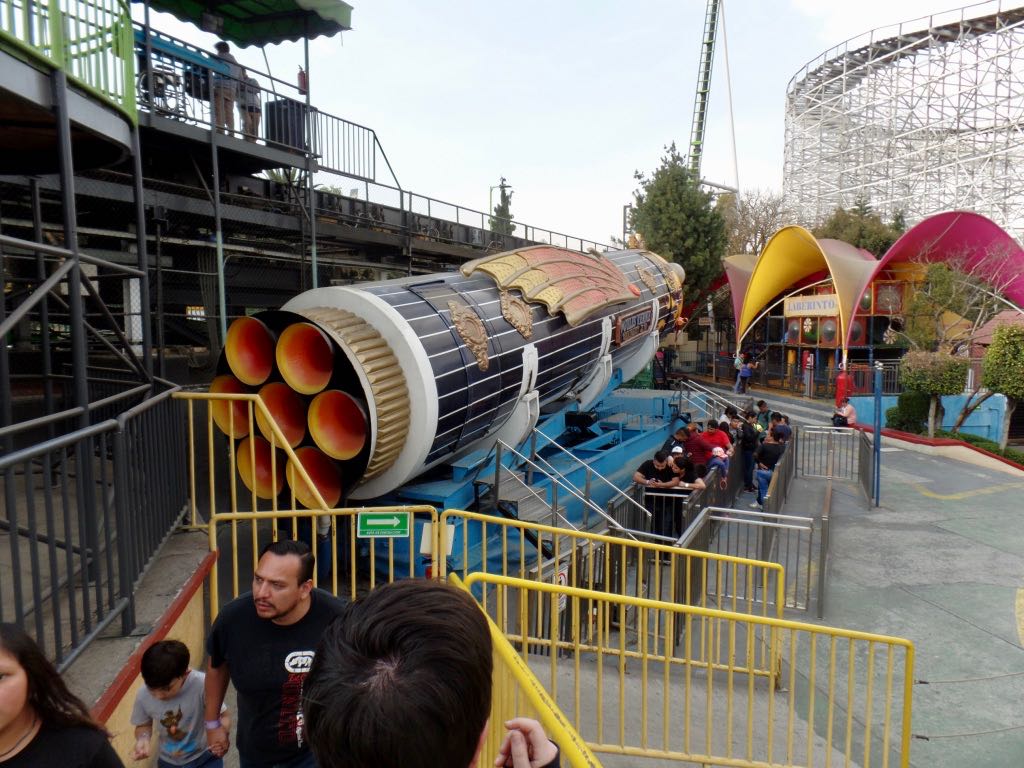 OK, though, back to the cylinder. This is what it is: a rocket that's dropped in here from a George Méliès picture!