At the halfway point of the year

bunny_hugger was frustrated, or infuriated, with her standings in the race to make the Michigan state championship series for pinball. The top 24 ranked players in the state are to to go finals. A few might decline the invitation, so let's say the top 30 have a chance of competing for the state championship.

bunny_hugger finished the first half of the year in 40th place. I was in 24th, inspiring her to enviously complain that I always do better than her in pinball. I will admit to being slightly better. Most of our difference in positions amounts to having four good tournament finishes the first half of the year: three good finishes at Special When Lit monthly or league tournaments, plus a good finish in the Pre-State Championship pin-golf tournament, held at the Special When Lit facility. In explaining why I do not think it's given that she won't make state I would keep pointing out: there are more tournaments scheduled for the last six months of the year than there are the first half. One great finish in any of them would put her soundly in the top 30. Two decent finishes would put her in the top 25. And, after all, Michigan's second-biggest event was coming up in the middle of July.

This is the Baby Food Festival, in Fremont, at ... the Special When Lit facility. It's also the Meijer State Games, the tournament that I keep reminding

bunny_hugger she took the 3rd place in the top division from just two years ago. The Baby Food Festival tournament this year would have a Main and a Classics division, both of which

bunny_hugger could finish well in. Plus daily tournaments on Thursday and Friday which, thanks to the number of people we could expect in, might be almost as valuable and easier to win. Mid-July could change everything.

The Baby Food Festival tournament is run as Herb style. That is, there's an open qualifying period when everyone tries to put up high scores on a set of tables. You get points for your finish, the highest score on a table earning 100 points. Second-highest earns, here, 95 points, and third-highest 93, with fourth and so on dwindling down, one point per position. Herb-style tournaments don't have to go that way; you can set it to be 100/99/98/97/etc. This little bonus for finishing first or second --- and for knocking off someone else's first or second --- is how AJH and PH, running the tournament, like to do things. Your standing in the tournament is the sum of your scores on the tables. The top 24 players, in the Main tournament, go on to the Pro division. The next eight who aren't restricted on the grounds of being too good, go into the Novice Division. The top 12 players in Classics go into the playoffs for that. The daily tournaments take the top eight players.

For the first time the pinball events for the Baby Food Festival were to be held in the Special When Lit facility. This is the large space, the back of an investment broker's building, that all the regular monthly tournaments have been held in for a year. It's also where the State Championship Series was back in January. This is also to be the last tournament at the Special When Lit facility: AJH and PH believe they are close to securing a deal for a new, larger facility to which their events will move. I hope that my good finishes at this venue will carry over to the new.

But having the games at this venue, rather than at the (now closed) diner on main street or the Moose Lodge in town, did mean it was easy to just open the place for an extra round of competition. So the Saturday before the Baby Food Festival, the facility was open for ten hours of qualifying for anyone who wanted to put up scores.

bunny_hugger and I, along with MWS and Lansing League newcomer JB, carpooled together to play. Even better, the day's entries were free. Games at the festival --- which is a charity event --- are normally a dollar a play, although this year they were trying out a new plan of $40 for unlimited play.

So this was ... wonderful, really. We just wandered around the place, playing and recording scores, enjoying the fun part of unlimited-entry Herb tournament qualifying. This is where you play, and you have something you're particularly trying to do ... but also, if you screw up? It's all right. All you've lost is a bit of time, nothing serious. No dollar an entry. You can just try again to do better than you have. An infinite expanse of time and future chances lay before you.

At the end of this pre-festival day? I had a bunch of mostly bleh scores. One really good game of The Walking Dead, in the main tournament. A pretty solid Barracora. Indifferent scores on everything else, including Classics. I was in the top 16, sure, but not with any scores that would stand up to two full days of serious qualifying attempts.

bunny_hugger was in about the same spot. JB was, I think, in second place. MWS was in first, with the perfect-attainable 400 for the Main and the Classics tournaments. (There were more than four tables in the Main tournament, but only the top four scores counted.) Oh, and

bunny_hugger was on top of the Women's tournament, which is nice to have but couldn't help her in the state ranking, as only open tournaments count for that. It would help her in the women's rankings, but Michigan has a weak women's pinball scene. It can't get her back to the Women's World Championship.

But of course we were going to come back. We figured to go back either Thursday or Friday, to shore up scores and try our luck at a daily tournament. We picked the Thursday, so that we would be able to rest Friday and not drive out to Fremont --- two hours away --- two days in a row.

Trivia: TAT-3, laid down in 1963, was the first direct transatlantic telephone cable connecting the United States to England; it could carry 138 communications circuits. Source: How The World Was One: Beyond the Global Village, Arthur C Clarke.

PS: What is finer than an amusement park by night? Not much. Back to La Feria. 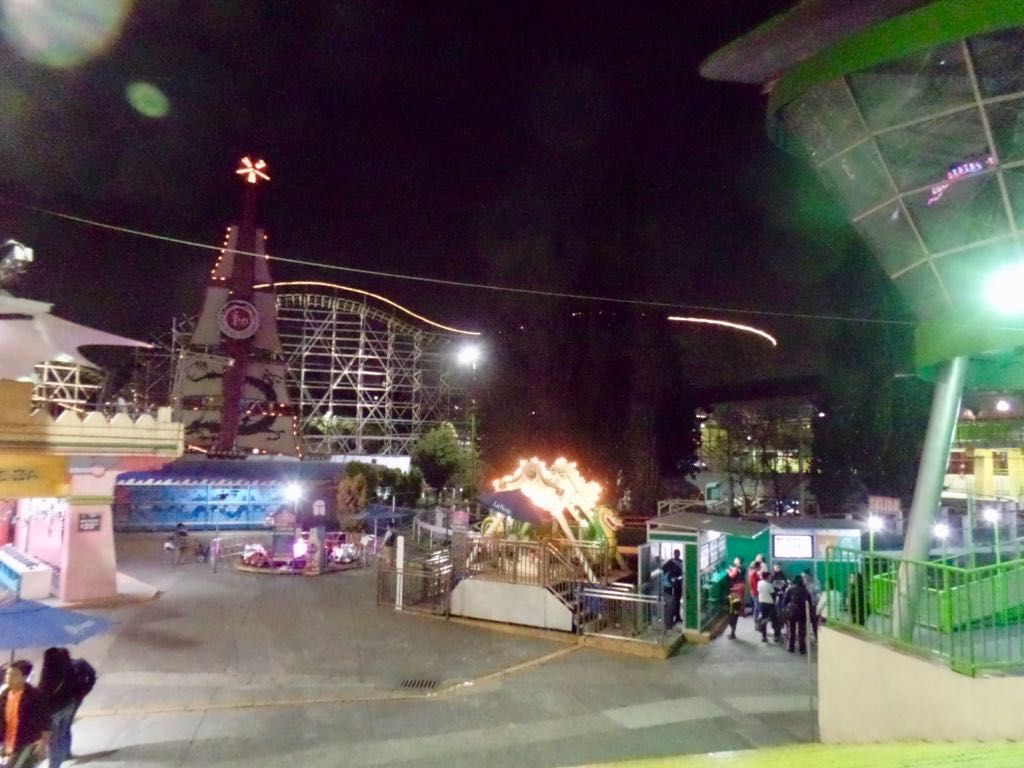 Looking out at the midway by night. The tower with green lights around it on the right is the main gift shop. 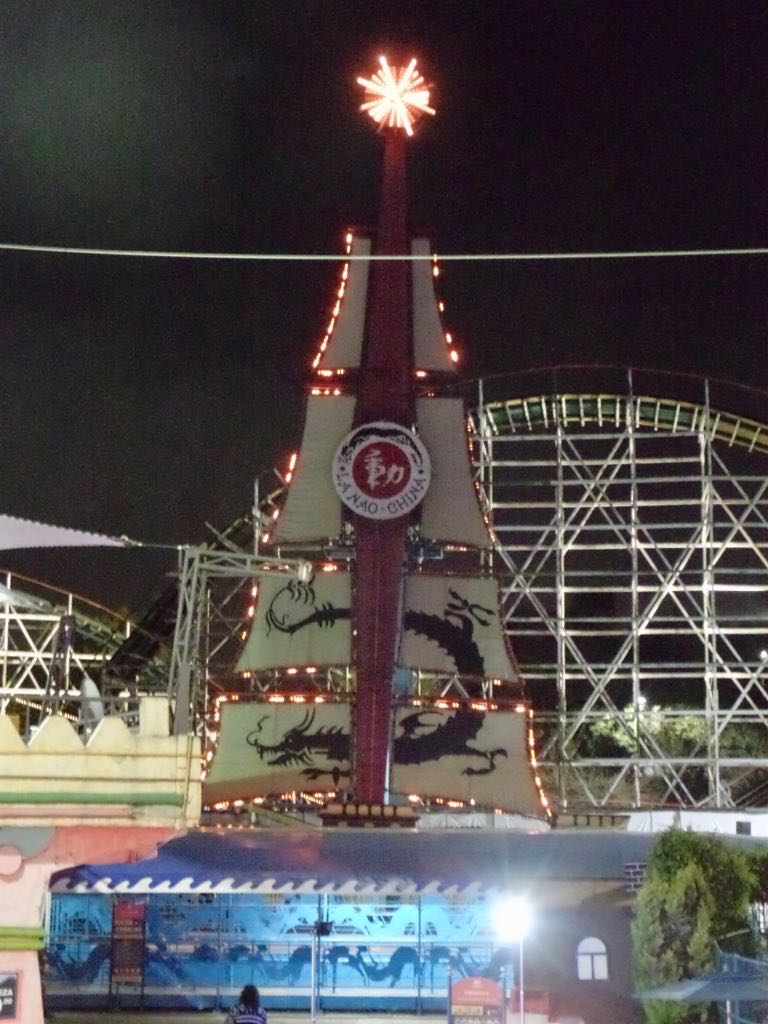 Oh, the swinging ship ride, named La Nao China. We didn't get on it, but do admire the dragon across the sails there. 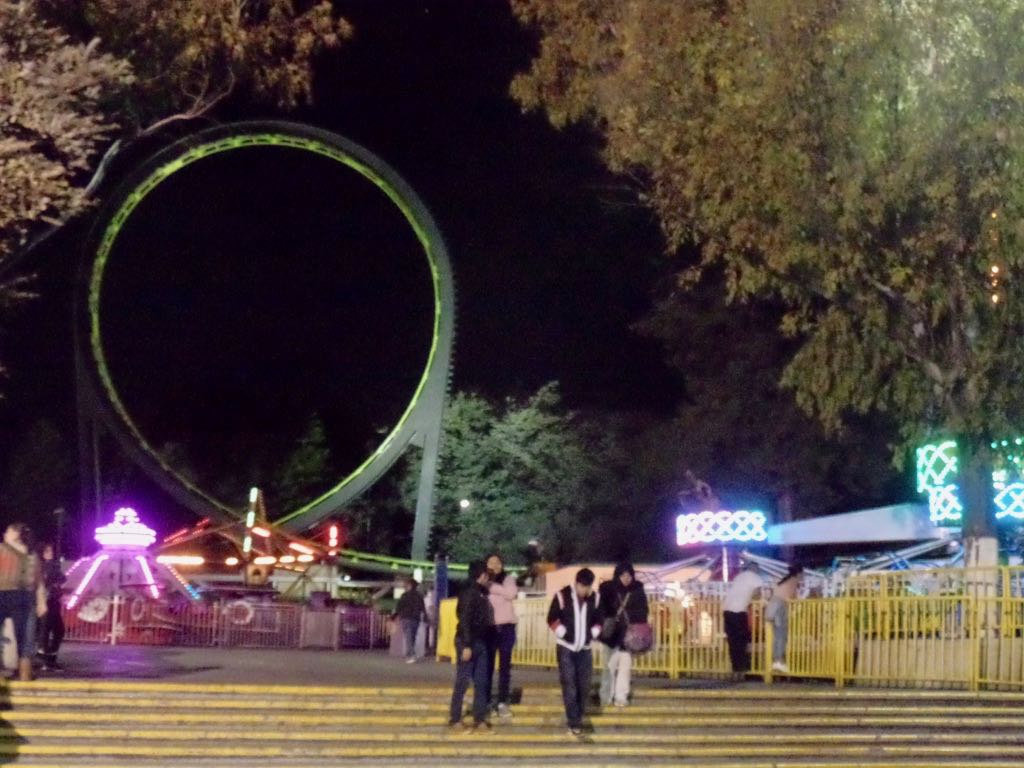 Cascabel 2.0 by night, along with some of the steps that lead down a terrace of the park.