I'm sorry to put the Pinburgh report off a day but folks need to know how everything else is going. Lately, that's been: terrible. This has been the worst week since November 2016.

Thursday in a meeting at work

bunny_hugger dropped her pen, and the cap disappeared to wherever it is lost objects go. It's a pen of sentimental import, one given by the university to honor five years of service. They don't give out that pen anymore; they give out a cheaper model instead. Naturally.

Friday a local fiber-Internet company called, cancelling our weekend appointment to get better Internet installed. They had finally checked and found out that, actually, they don't serve our neighborhood and they don't know why they e-mailed

bunny_hugger to say they served our neighborhood now. Sorry.

You may have noticed I never updated about our wounded goldfish to announce when he returned to the pond. This is because he hasn't. His wound, we assume caused by scraping against the rocks which had trapped him, doesn't seem to have changed very much and we've had to keep him in quarantine. He's in slightly better shape, since

bunny_hugger thought to float a piece of styrofoam on the quarantine tank and now he has a hiding spot. This is important given that he's in quite shallow water. But we can't tell that he's actually recovering any and that's upsetting.

You may recall our pet rabbit Sunshine, recently cleared of the sneezing that may be from pasteurella. She's been sneezing again. We have a vet's appointment for tomorrow. It's possible that she has chronic pasteurella and we'll just have to periodically give her injections to tamp it back under control. It's hard to say whether Sunshine more dislikes the injections in her back or the extra drops in her eyes. She is definitely not going to like me for this, even if all I have to do is bring her to the vet's. I'm the dedicated bad guy, but if last time is indicative, she'll lose her trust in

bunny_hugger over the course of treatment too.

bunny_hugger watched a squirrel get into one of the potted plants to roll around in the dirt --- one bright spot has been the cardinal flower. This has been a gorgeous spot of red in our goldfish pond, a spot so shaded that it can't support bright colors. And as the flower has been blooming, more and more, it's lifted her spirits ... until sometime Monday morning when an animal, probably a raccoon who's supposed to have been scared off by our raccoon-scarer, snapped the flower. And snapped the plant stem in another spot, for good measure.

bunny_hugger's computer, a Late 2012 model MacBook Pro that she's had five years, had been acting up. The trackpad going crazy, spawning random window movements and the creation of new desktop windows, spontaneously. Then the keyboard started to malfunction, with useful letters like 'd' not registering at all or registering multiple times. We planned Wednesday to go to Michigan's Adventure amusement park (and did), so brought her computer to the local Apple shop up the street. They took it and gave a receipt and then said they'd be able to look at it Friday. The statement was so odd we couldn't ask ... well ... could we take the computer back, then, and bring it in on Friday? It never occurred to me they'd need more than one or two days to work on it.

bunny_hugger tried to carry on with her previous computer, a 2007 MacBook, as substitute. This is not a computer up to moden computing challenges like ``reading e-mail''. Although the keyboard is great, and the computer makes a satisfying clunk sound to lock closed, it's not a productive machine. Still, come Friday, we got from the shop the news ... uh ... nothing, actually.

bunny_hugger carried on trying to prep class in-between cursing herself out for bringing the computer in to the shop. Still, Monday would be a new day and the worst that could happen ...

... all right, was what happened Monday.

So the shop had a break-in early in the morning. The thieves got the computers in the workroom ---

bunny_hugger's and another person's --- plus a couple from the display floor that were easy to grab before running off. One of the display ones was a circa 2002 iMac that was still around because ??? ?? ? ????. But you can imagine how happy

bunny_hugger was to know that her computer was now ... something the insurance company was going to deal with.

The shop wrote a check for the approximate value of the laptop, of course, and had it ready in a couple hours.

bunny_hugger needs to shop for an get her new computer, and hopefully soon. She can use my computer for the stuff that the 2007 MacBook absolutely will not do, but it's inconvenient having to go to that bother.

Anyway thank you all for your kind words but if you really want to make things better please message me for enemies you could smite for us. Thank you.

Trivia: Owing to Rhode Island still using its 1663 charter as late as 1840 the city of Newport was entitled to six seats in the General Assembly, while Providence had four. In 1840 Newport had 9,000 residents; Providence, 23,000. Source: Rhode Island: A History, William G McLoughlin.

PS: Reading the Comics, August 23, 2019: Basics of Logic Edition, the usual thing you expect to see here on a Sunday.

PPS: Oh, huh. It's my last Mexico City photos. Shame to post them on such a downer of a day but that's going to happen as long as I do photographs and journaling together. 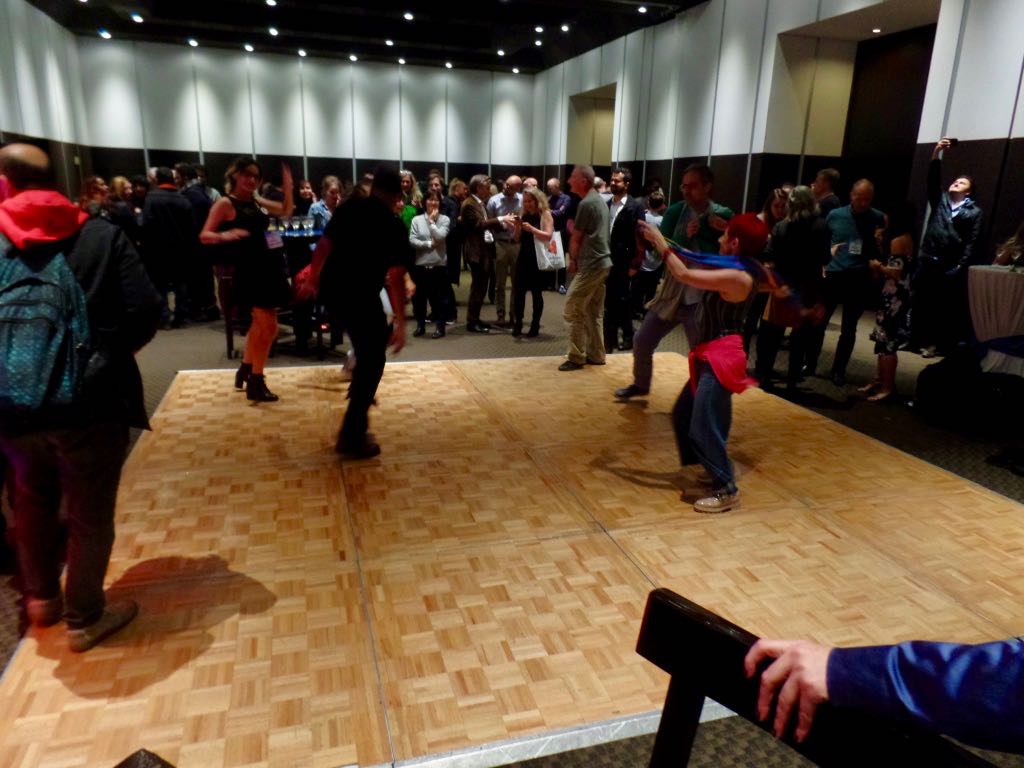 The dance floor at the end-of-conference reception. Also you can see a chair, letting you know that I was more 'sitting' than 'dancing', to everyone's relief. 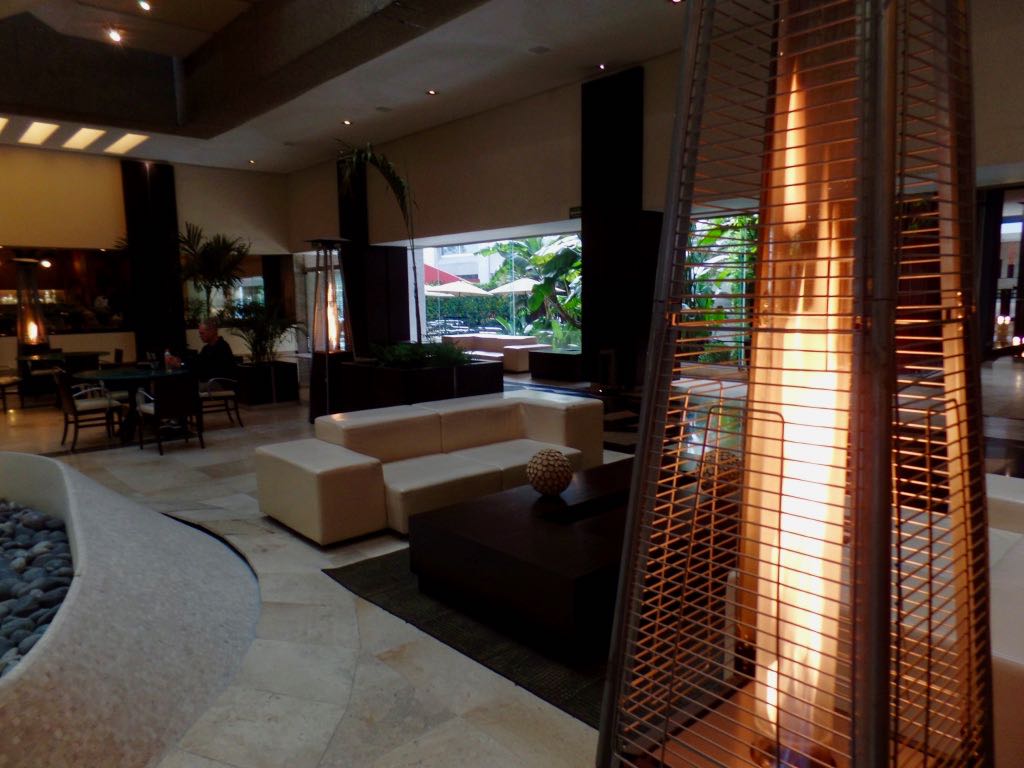 The hotel lobby, at checkout. The lobby had these caged pillars of flame that were just always running and added a nice bit of warmth to the lobby. 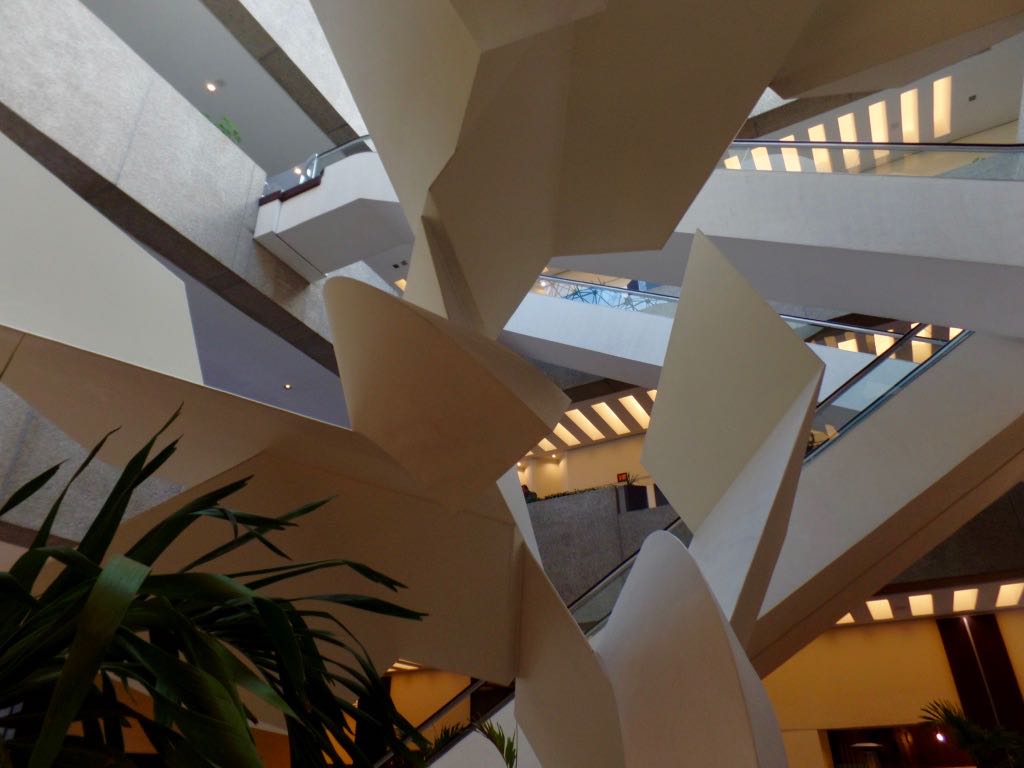 Peering up in the lobby through a piece of abstract sculpture and the zig-zag mesh of escalators which lead to event space. The rooms were in a separate tower of the building and so far as I know inaccessible except through the first floor.