We would get to sleep in Saturday. So would MWS, and so would our would-have-been roommates JTK and CVK. What about other people?

bunny_hugger until she moved away last year, went 55-65 and finished 184th in the B Division. ADM, in A Division, went 63-57 and is tied for 148th there. I don't know what the whole group has done --- I'm not even sure who the whole group is --- but, you know? There's no doing bad at Pinburgh. There's just not doing as well as you hoped.

And the people who did well, did very well. BIL, one of our roommates at state finals back in January, and (as a schoolteacher) one of the few pinball people

bunny_hugger can commiserate about work with, finished tied for 4th in the D Division. He doesn't just go to finals. He gets two rounds of byes, not having to play before the third round of five. Sad to say that's the only round he plays, losing on a tiebreaker game at the end of the four-game round, and he's at liberty the rest of Saturday.

SJG, the guy whose incredible skills I admired back as an undergraduate at Rutgers, makes playoffs in the B Division, and goes out in the quarterfinals. He's not a Michigan player, though, and if he remembers I exist I shall be most surprised.

Everyone's thrilled for AJR, who's one of those up-and-coming kids. He just started attending Michigan State University. We've been trying to get him to join the Lansing Pinball League, and he protests he doesn't have a car, and nobody can get him to accept that there's a bus that runs right from campus to our league's bar. We did warn, though, that if he wins Pinburgh he's not invited to Lansing League anymore. AJR's the early favorite to win Michigan's state championship in 2020. The very early favorite to win 2021. AND, a past several-times state champion, is popular enough too.

AJG? Well. He's not a universally popular figure, though he, too, is a several-times state champion. He's controversial, to understate. He's had a lot of pointless fights stirring up drama in Michigan Pinball social media groups. He's been caught, if not cheating, at least coming extremely close to the edge. And for no good reason: it's not like he needs that kind of edge to win. He is a really good player. He has uncanny control over where the ball will go. And he has a superhuman ability to find repeatable shots, things that will grind out points as long as he doesn't bobble the ball. He doesn't need to, like, death-save (a forbidden way of shaking a game to return a ball to play) while he thinks nobody's watching.

And. He's been so boastful, so full of himself, for so long, that you'd think he draws a comic strip about a unicorn. The thing is that he is that good. And, since coming to realize that his arrogance has offended a lot of people for no good reason, he's been trying to present himself more kindly. And nobody wants to discourage him from acting in better ways. Even then he mis-steps, unable to avoid the humblebrag. At one point that weekend he posted to Facebook an encouragement for people to stop being shy, post pictures of where they set grand champion scores on Pinburgh tables, like he did, here. He smiles easily now; it's hard not to see Eddie Haskell.

He's boasted in the past about how he'll win Pinburgh. And he's flopped each time. One interpretation of this has been that, well, he doesn't travel. He plays a couple of venues, with the same people, all of whom he considerably outclasses. When he does go to Pinburgh he suddenly plays people who are about as good as him. And then --- faced with the paradox that he has played a game and not won it --- he doesn't know what to do. Doesn't know how to step his play up where it's needed. Still, this time? In ten rounds of Pinburgh he had only one round below .500, and that one was 4-8. And he only has to play three rounds of finals.

Each round is four people playing four games, earning points for each finish, first place taking three points, second place two points, third place one, last place none. Just like the regular days of Pinburgh. Two first-place finishes and anything other than two last-place finishes nearly guarantee you move on. Even weaker finishes can be enough. One can plausibly win a round --- as you'd have to do to win finals --- by finishing in second place in all four games. (Other players would have to split their finishes just right, and you'd still have a playoff game you'd need to win.)

In the ten rounds of Pinburgh play, scored the same way that playoffs are, he's been one of the top two players nine times. He's been the top player six times.

So he might well win Pinburgh, and everyone knows if he does that he will never shut up. And, we have to admit, he'll be right to.

If you want to watch all this, by the way, you can see just over six hours of A Division playoffs on YouTube here. And then The final hour of play is at this link. I recommend skimming around some. But you will see how really, really outstanding players handle the ball, and make it look like they have magical control of their flippers. There is not a thing they do that you can't do too; you need only try.

The first round AJG plays, he takes fourth place on late solid state game F-14 Tomcat, third place on early solid state game Flash gordon, third place on modern game Metallica, and second place on the electromechanical Pro-Football. The two people, of the four playing, with the best record go on to the next round. AJG has the worst record of his quartet. He's knocked out. The rest of us don't have to think how we'd be gracious to a person who would be challenged to handle being a winner graciously.

AND, playing the same games but in a different quartet, takes second place on Metallica. He finishes last on Pro-Football. He wins F-14 Tomcat. He takes third place on Flash Gordon. He finishes third in his quartet, and is also knocked out.

In this round he finishes last on Willy Wonka, Jersey Jack's newest game and something barely anyone's touched. He has a first place finish on electromechanical game High Hand. He gets first place on Jurassic Park, a modern game doing service as late solid state. He finishes in last place on Meteor, the early solid state game. This sends him to a tiebreaker, on Pro-Football. This he wins. He's on to finals.

He is, at least right now, one of the four best people in competitive pinball.

Right now, I should say, is like 9 pm. Players had to report at 9:30 am, and the first rounds started at 10 am. There've been breaks during the day, the A Division players getting that sort of consideration. Plus in A Division they take time between plunging balls. But when I played in D Division two years ago, even without breaks, it was like 6 or 7 pm. And these are people who can play even the fast games forever.

AJR's opponents: Keith Elwin (KME), everyone's pick to repeat as winner of Pinburgh and a strong candidate for best pinball player of all time. Cryss Stephens (CDS), who cleans up in Pennsylvania and Ohio and mercifully doesn't come to Michigan to mess up our tournaments anymore. Daniele Celestino Acciari (CEL), an Italian player who's routinely winning stuff like the Dutch PInball Masters or the Danish Pinball Open, and who won the 2017 Word Pinball Championship and the 2018 European Pinball Championship.

Third game. F-14 Tomcat. It's a deeply hard late solid state game. CEL goes first and scores 1,344,480. AJR is the second player; he can't get anything together and scores 906,130. KME, the third player, actually has a good game and scores 4,185,710. CDS wraps it up with 2,917,690. AJR has a second place and two last-place finishes. It's now impossible for AJR to win Pinburgh. He could still take second, though. But with two wins and a second-place finish, Keith Elwin has secured first place in Pinburgh, whatever he does in the last game.

PS: How August 2019 Treated My Mathematics Blog, my least mathematical post of the mathematics month. It's also usually one of my best-liked pieces.

PPS: Can you spot which of these pictures of meeting Penelope is maybe the single best narrative photograph I have ever taken? 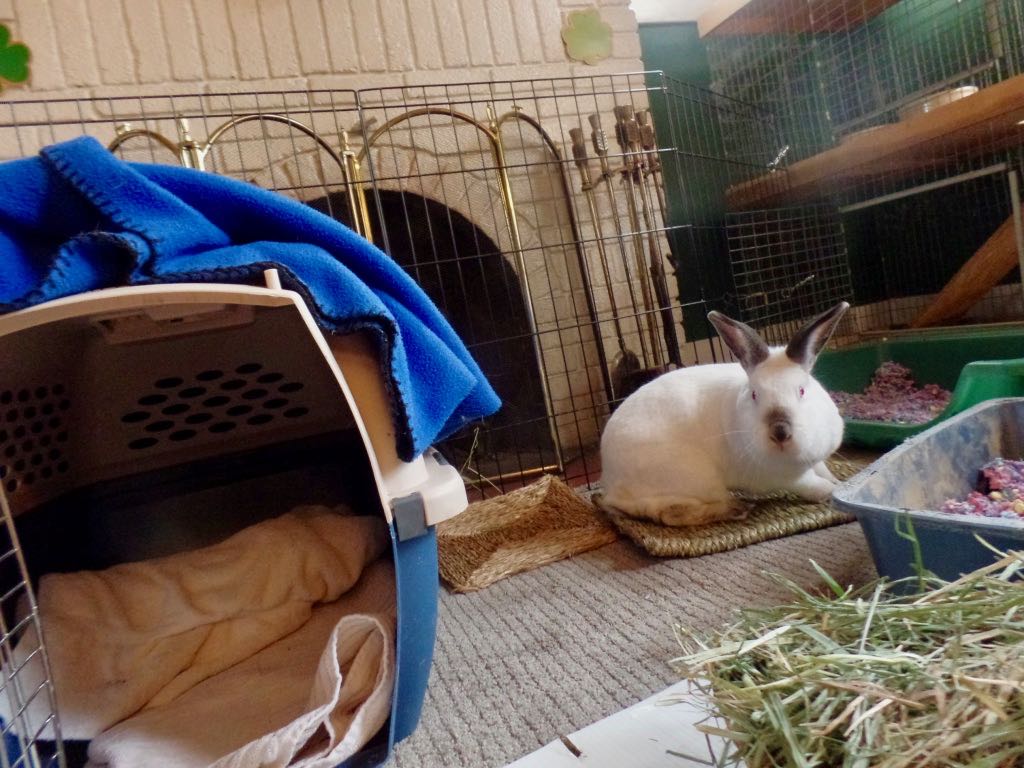 Penelope starts to explore her environs and finally holds still long enough for me to get a clear photo. (I'd left the camera's simulated ISO on, like, 80 which is inadequate for our house interior, which gets no light.) 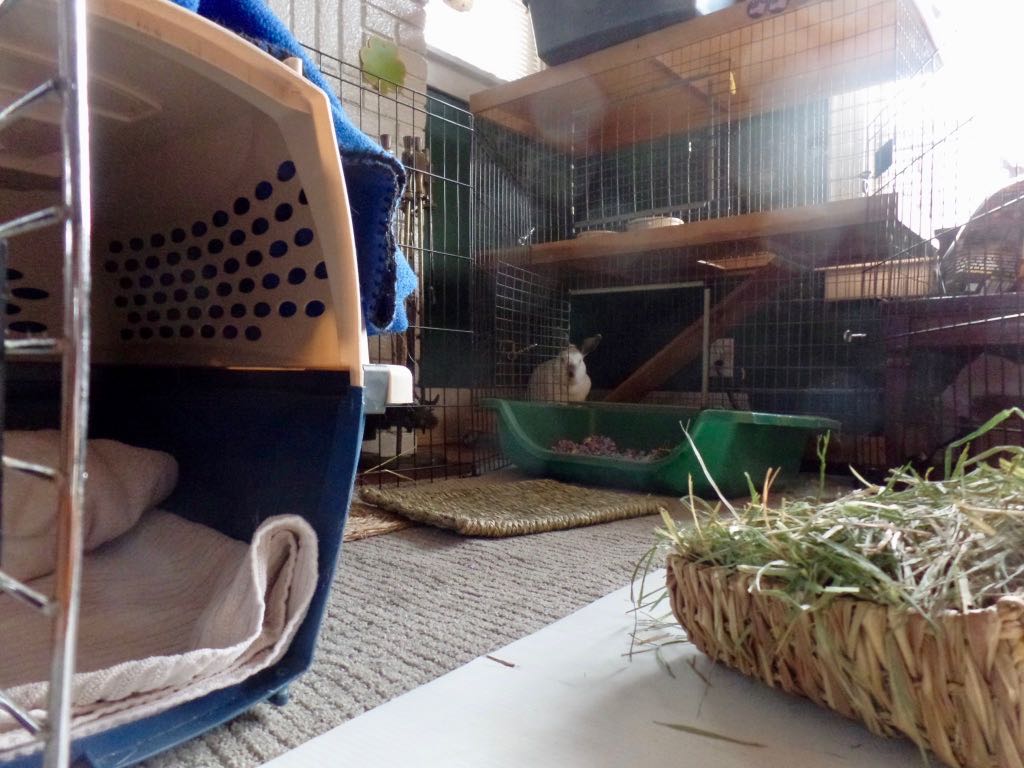 Penelope really likes being here and is excited to meet us! 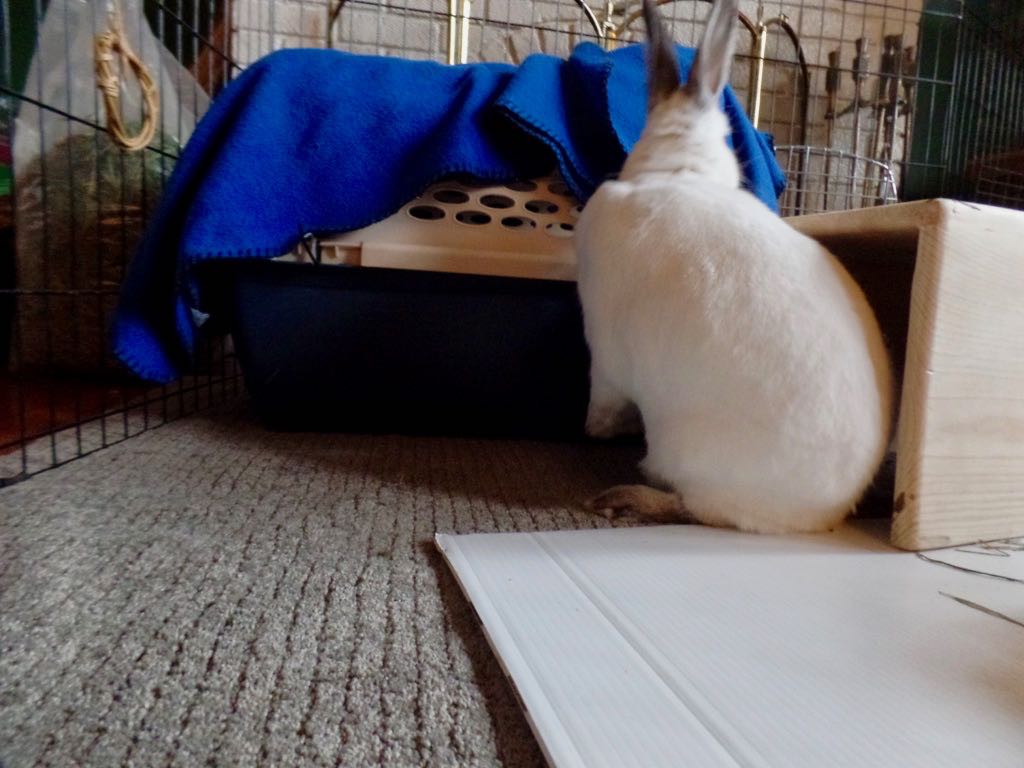 After exploring the hutch she came back out to her wooden tunnel and carrier and other things that smelled of her old home.