MWS was happy to use his car for our Knoebels/Altoona/Pinburgh trip. He was, for some reason, reluctant to just stay in a hotel Sunday night and drive home Monday. He had the idea that hey, even if we left Kennywood at like 10 or 11 and that meant he drove straight home --- well, without traffic, that'd mean he'd get home at like four or five a.m. He's done that before, staying in Lansing or Grand Rapids until closing time and hanging out with people after.

bunny_hugger and I found this prospect horrifying. But he held firm to the idea.

Finally I told him that I --- always the first volunteer to drive when he felt tired --- did not believe that I could safely drive on this plan. Not after getting up around 9 am, checking out, spending until 5 pm at ReplayFX, and then spending hours at Kennywood. For a brief while he proposed that he could drive us all to his house, and we'd just sleep in his guest room until

bunny_hugger and I could make our additional one-hour drive home. But shortly before Pinburgh he relented, agreeing to stay in a hotel Sunday night. But somewhere outside Pittsburgh, so it would be cheaper. This seemed fair enough to us.

He nevertheless did all the driving, taking us the roughly two hours to somewhere outside Cleveland before stopping at a Red Roof Inn he'd booked using some kind of app. This would give us somewhere to sleep until either 11 am or noon; we weren't sure what the check-out time was. We aimed for 11 am, though, and were a little late getting out, to the consternation of housekeeping. I told the housekeeping person when we were actually finally done moving stuff out to the car.

From here the drive home was, well, ordinary. Just the Ohio Turnpike, past the Cedar Point exits ---

bunny_hugger's and my season passes whimpered a bit as we drove past, but MWS didn't have a pass and it would be obscene to pay a day's admission for, like, two hours --- and finally stopping at a rest area with a burritos place. The cashier didn't give us sour cream or plastic forks and we couldn't find any among the fixings, so I went back to ask for both. It took some time for me to get a cashier's attention, in part because a big mass of slow-moving, slow-to-decide people had gotten there, and

bunny_hugger was dying from embarrassment waiting for me to get this stuff. This served as a late-ish but welcome lunch, anyway. We never did find any rest areas with pinball.

And, we drove home. To MWS's home, at least, where we arrived in the early afternoon to the delight of his dogs. His more shy dog was glad to see him and rather put off that we were there, but all right. And K was happy to have MWS back too. He was still recovering from the first of two hernia operations and had spent the weekend mostly in the house, wearing Teenage Mutant Ninja Turtle pajamas.

After a bit of sharing the news of the weekend with K, I collected my own car keys and we loaded up, and drove the hour back to our home. Yes, we hit rush hour, but that's all right. We were home early enough in the evening. The next day we'd collect poor injured Magnum from the pet store, and set up a quarantine tank in the basement for him to continue his recover. And we'd go pick up Sunshine from

Trivia: The HMS Dreadnaught, launched 1906, took a year and a day to build, in top secrecy. Source: To Rule the Waves: How the British Navy Shaped the Modern World, Arthur Herman.

Currently Reading: Little Orphan Annie Volume One: Will Tomorrow Ever Come? The Complete Daily Comics 1924 - 1927, Harold Gray. Editor Dean Mullaney. OK, seriously, Warbucks has a couple street toughs come with him to kidnap the world's leading neurological surgeon from Paris in order to help Annie with her circus-acrobatics-accident-caused paralysis. Objectively this is appalling behavior but it's also kinda awesome. Like, it's not even subtle; his thugs even say, you know, it's gonna be real bad if Annie doesn't walk again, and they keep watching to make sure he doesn't escape. Just, wow. 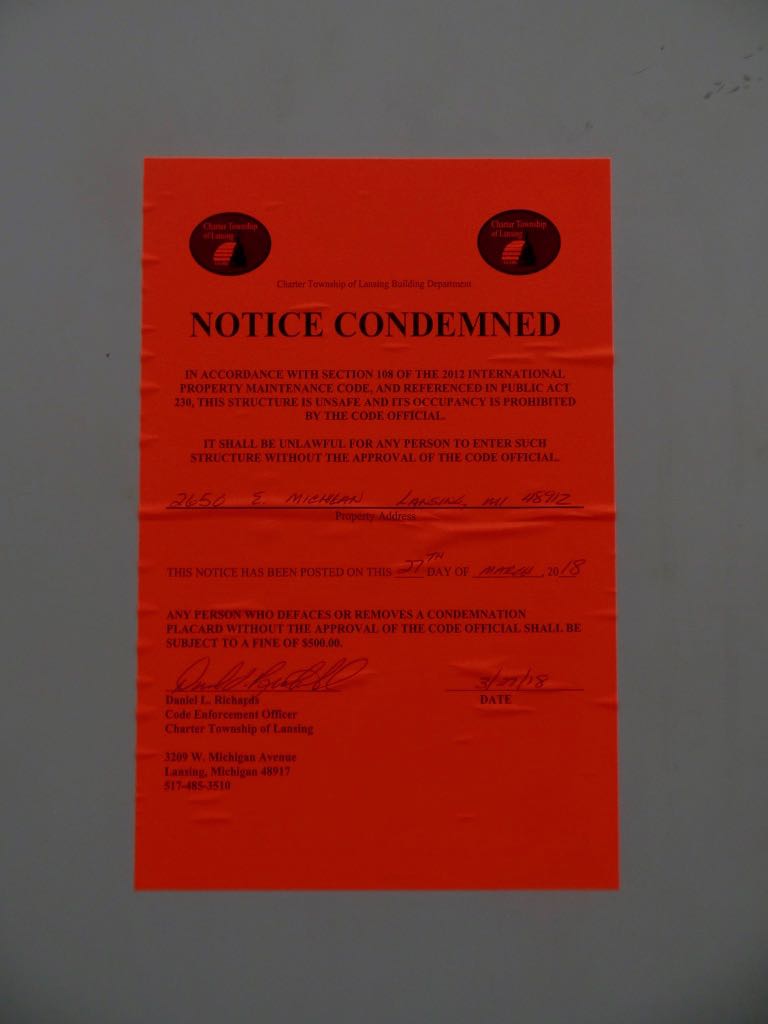 Oh. Condemnation sticker posted to the back door; its mate was posted to the front door. We never did learn what exactly the place had failed for but it does all seem pretty serious. Well, the place would stand for about a year, and then the owner demolished the building, figuring that it would sell better in a neighborhood everyone expects to gentrify soon if there weren't a building there. And so a landmark of the town for decades disappeared, sadly. Maybe someday someone will buy the lot. Put up a 24-hour diner there. The area has sore need of one. So by Theio's location is this traffic island with a sign welcoming people to the Lansing Eastside. Also it has this little tower, honorees of the Eastside Neighborhood Organizations. When I described this to

bunny_hugger she, who has lived in this area for 21 years and passed this spot an estimated 20,408 times, had no recollection of ever seeing this thing. 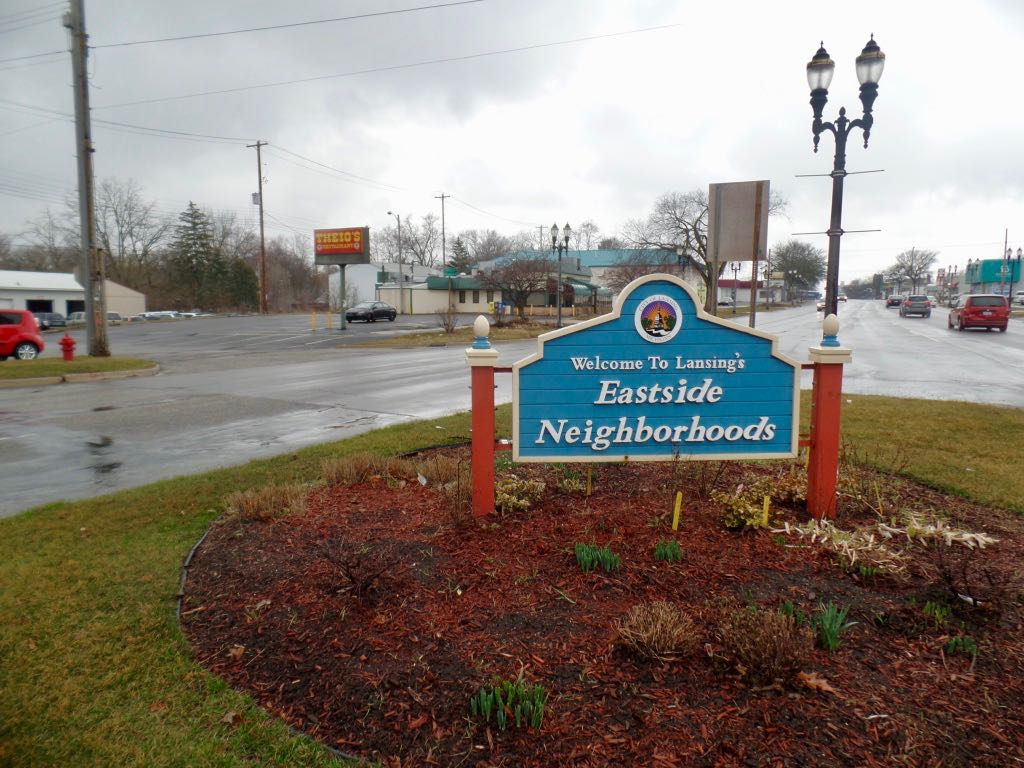