We do try to get to some county fairs in summer. Ingham's was held during Pinburgh weekend so that was out. Calhoun County Fair we usually go to with

bunny_hugger's parents. But her mother had that crisis, the intestinal blockage. And while she was out before the county fair, she wasn't feeling anywhere near ready to go, and we weren't going to press her.

bunny_hugger's father didn't feel like he should leave her for this either, and so we figured to (again) go alone.

We went in the evening, figuring somehow that this would be enough time, although we never have enough time for anything. But it was also important to spend time with her parents in their home, nearby the county fair, and honestly it's not like time spent looking at people's craft projects was necessarily better spent than being with her mother the week she got out of the hospital.

There was some slight chaos finding parking since we missed the best route to the fairgrounds parking area and were trying to do this without using the satellite navigator. But otherwise the fair was about where we had left it. We spent a fair while walking around the barns, looking at the goats and sheep and cows and horses. Thinking of which pigs

bunny_hugger's father would pet despite the many ``DO NOT PET PIGS'' signs around the barn. That sort of thing. We got there late enough to miss a bunch of events and things, unfortunately. We did hear, from the bandstand, the spillover music of the Billy Ray Cyrus concert, which went on so long that we assumed we were listening to whoever came on after the headliner. No; he was just playing for that long.

Yes, we visited all the rabbits. Also the lone guinea pig on exhibit, who won two medals. The rabbits, though, they were a nice bunch and every Californian brought back feelings about Penelope.

We did get to the craft barn, with the exhibits like the photography and painting and produce and flower arrangements and all. This renewed

bunny_hugger's thoughts that she could probably put something ribbon-worthy in for photography, and maybe for plants as well. Also that her mother could knit something ribbon-worthy. The woman overseeing the craft hall pointed out to us an impressive needle-work portrait that was all one thread, and then asked if we'd be staying long as they were closing up.

All right. So we went over to the rides, to buy tickets for a couple of attractions. The important one was the carousel. It's not a wood-carved antique, although it is a fairly old model. The important thing is that it's run at the design speed of five rotations per minute, a speed that makes the carousel in fact thrilling. That's always a good move. We also got rides on the Ferris wheel.

bunny_hugger isn't normally much for Ferris wheels, but ones that aren't too large but are pretty fast are good by her lights, and this is one of those. We also got in a ride on the Wipeout, in part underwritten by the free ride you get for buying $20 worth of tickets. We had thought to get a last ride on the carousel to close out the night and the wanderings around the fairgrounds. But by the time we got back to it, the ride seemed closed, with the operator and a mechanic type poking machinery and oiling things. So we went to ... I forget the name of the ride, but it's Some Other Company's version of the Scrambler. This was a ride satisfyingly long and a bit dizzying, in the end.

We got four elephant ears at one of the food stands. One for each of us, naturally, and this was the only fairground food we actually ate. But one to bring home to each of

bunny_hugger's parents. Her father was anxious in his low-key but persistent way about having one, and

bunny_hugger worried in the later rides that the food stalls might all close before we got any. Her father was glad to have this. Her mother appreciated having one, but wasn't sure she should eat a whole elephant ear so soon after her surgery and getting back onto solid food. She had some, but gave the rest of it to us to split, so we had maybe too much fried dough. But that is part of why one goes to a fair.

Trivia: During the tulip craze bulb weights were given in azen, ``aces'', a unit originally used by goldsmiths. One ace was about one-twentieth of a gram; a mature bulb might be from 50 to over a thousand aces. Source: Tulipomania: The Story of the World's Most Coveted Flower and the Extraordinary Passions it Aroused, Mike Dash.

Currently Reading: 100 Years of American Newspaper Comics, Editor Maurice Horn. It's an encyclopedia of just what it says on the cover, with articles on a staggering number of newspaper comic strips. It was published around 1995, which serves to partially explain why the book thinks the Terry and the Pirates revival is something anyone might care about. And it's got some amusing snark about, like, the decline in art and story quality of The Amazing Spider-Man. But then it's got weird stuff like mentioning how Peanuts had recently begun experimenting with continuity stories, and that's just ... like ... did you only just start reading Peanuts? From the mid-50s on it usually had some ongoing storylines. You could make an argument that in the 70s it became mostly a story comic with occasional spot jokes, even if the stories were goofy things like ``Snoopy's in a tennis tournament'' or ``Peppermint Patty's running away to stay in Snoopy's doghouse''.

PS: Exploiting My A-To-Z Archives: Characteristic Function, with a discovery that unsettled me about my first A-To-Z writings.

PPS: Now let's go to a furry convention! Lots of people in costume to follow. 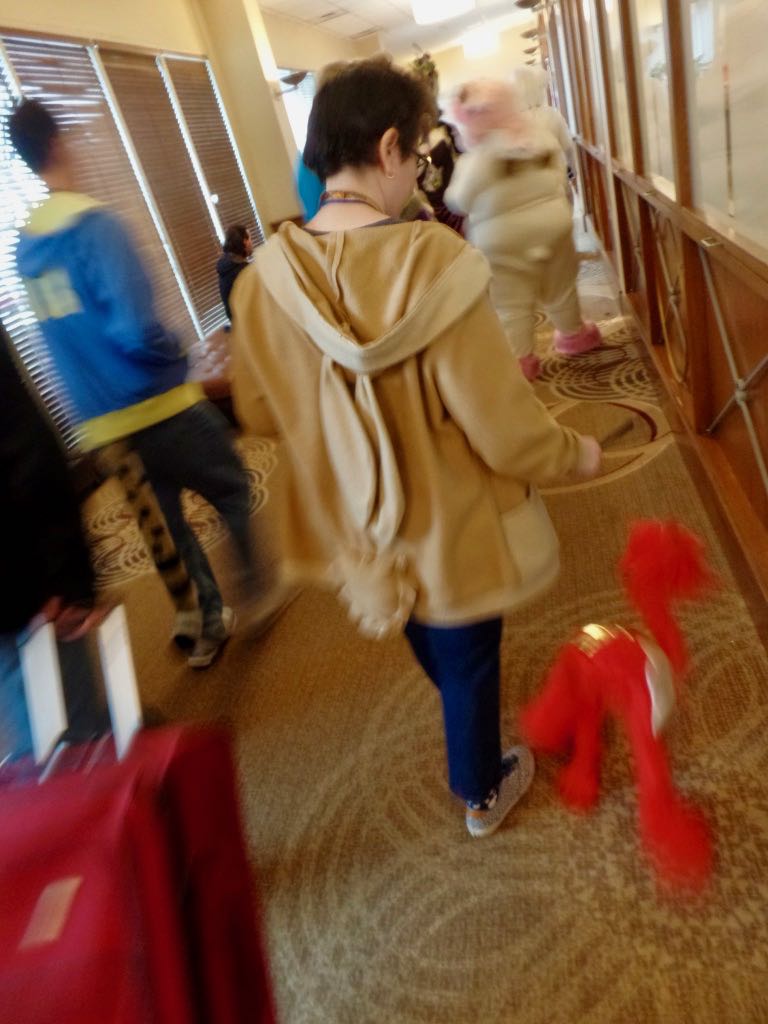 bunny_hugger had to show off Archimedes, her marionette dragon. Here she walks him down the hallway outside Hospitality. 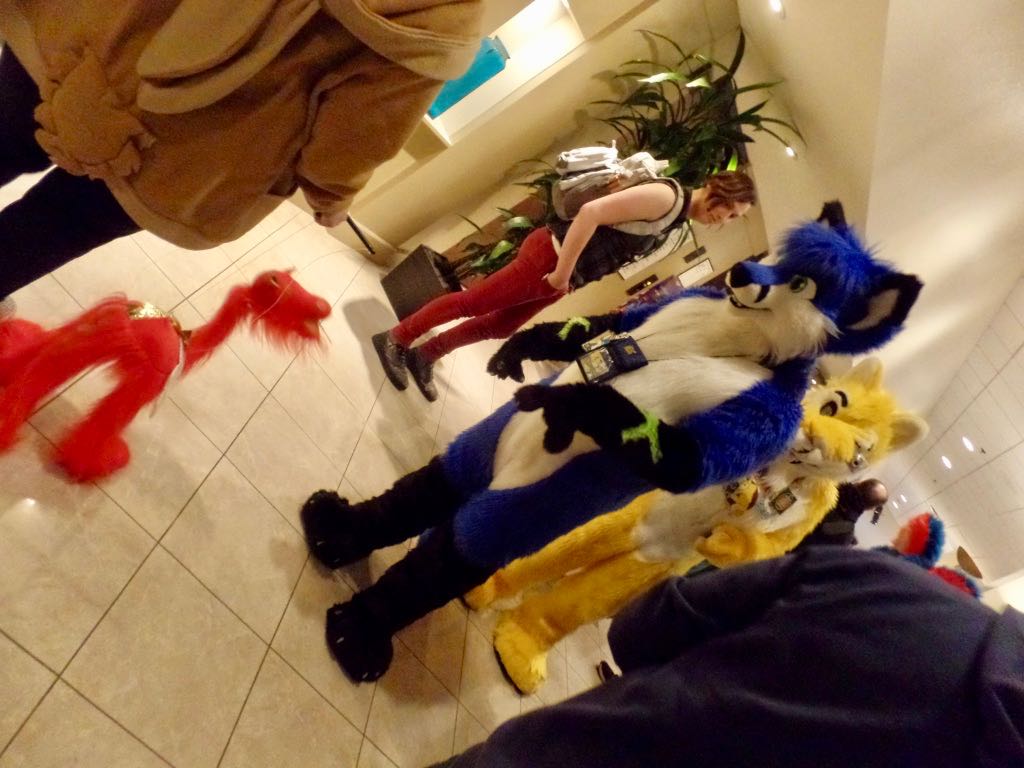 Archimedes meets one of many fursuited friends. 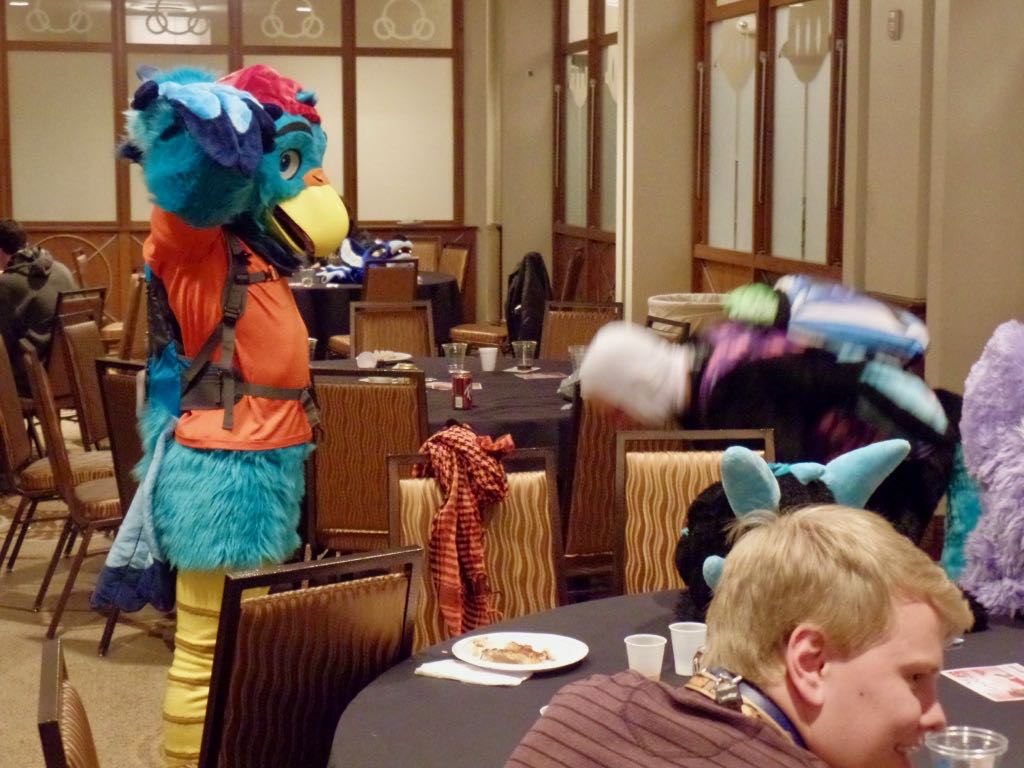 Hanging out in hospitality, with the mix of people in suit and people just hanging out eating and drinking.