Sunday we had a pinball tournament on the other side of the state, one of the monthly events in Fremont. It's a two-hour drive.

bunny_hugger was feeling miserable after her poor showing the day before. But otherwise expectations for this were good. Particularly, MWS --- who cleans up in these tournaments pretty reliably --- didn't feel like going, as it was too far for only a single tournament. (Even-numbered months have two tournaments run the same day; odd-numbered months just the one.) RED and JB, Lansing locals who've been cleaning up too, decided not to go. With this depleted talent pool

bunny_hugger would have a better chance to repeat her final-four performance last month. Plus, it was in the new Special When Lit venue. And she'd put together a playlist of stuff to listen to while playing, not to be unfriendly but to let something occupy her mind besides worry about the game.

So our first brush with death came before we even left Lansing. It was raining, pretty heavily, enough to be worth driving slow. We were on the Interstate. The car just ahead of us was turning to the off-ramp. Then it suddenly veered sharply back onto the highway, so fast and at such an angle I assumed the driver was hydroplaning and lost control of the car. I braked, yes, and steered to the left lane, to give a little more space and hoping that nobody was coming up fast behind me. The truck coming up fast behind me honked, and veered around all this on the left. Meanwhile the car in front, the one that veered back onto the highway, jumped back to the off-ramp, at about the last possible moment.

bunny_hugger, who had fairly closed her eyes when she thought a crash of something coming, asked what happened and I tried to sputter out a narrative. She rolled down her window and shouted at the veering driver --- now well away from us, a good thirty feet up along the offramp --- and gave them the finger. She was correct to.

But that was our only brush with death apart from the other brush with death. This one's more exaggerated. But a bit after this I heard a weird ticking each time the windshield wiper blade completed a sweep. I quipped that yes, that was a very good mysterious sound to hear coming out of the car.

A couple miles down the way I knew the source. On the driver's side windshield wiper --- of course --- the rubber blade was coming out of its mounting. With each sweep of the blade it threaded a little bit more out of the mount, flapping loosely around and getting tangled in the passengers-side wiper. After a few miles I was certain it was getting worse dramatically fast. I had to turn down the wiper speed, this as the rain got heavier still, and navigate through a shrinking zone of visibility.

So now we had this mess. We needed to find a Meijer's, or other store selling windshield wipers. And fast.

bunny_hugger suggested there would be one in Grand Ledge, the town we were just driving past, and I agreed, but didn't turn off the highway because I did not understand her to be telling me to turn off here at Grand Ledge. The satellite navigator told us to ... go to the next exit and turn around and back to the one I just left. And then we had to drive a bit off the highway and through town, as the last little threads of my windshield wiper snaked their way free.

(I know what you're thinking. My car uses a much larger blade for the driver's side than the passenger's side windshield wiper, so I couldn't just swap them. But if we had been nowhere near a town I might have done it anyway and accepted a weird annulus of visibility. It wouldn't have been worse than what I did have to deal with.)

Oh, did I mention that we, exhausted by the long day and long drive the day before, had left for Fremont later than usual, deliberately cutting our margin to the bone? Because we did. While

bunny_hugger used the store's Wi-Fi to contact AJH, and beg for a delay to the start of the tournament (happily granted; he's glad to have us at his tournaments and postponing things a half-hour isn't that big a deal) I marched to the car section and got wiper blades. The expensive ones, soaked through with Rain-X. Also I bought a screwdriver so I could pull open the tab from the old wiper blades. That'll add to the pile of stuff that I will never let out of my car since I needed it the once, along with the jumper cables and a bunch of air pressure things.

I bought blades for both driver and passenger side but only replaced the driver side. The difference was so marked and so instant that it was hard to believe.

Trivia: By 1920 half the power in Japanese factories came from electric motors. In the United States at the time a little under a third did. In Britain, barely a quarter. Source: The Company: A Short History of a Revolutionary Idea, John Micklethwait, Adrian Wooldridge.

PS: My 2019 Mathematics A To Z: Infimum, a thing that's quite easy to understand so I only use like 900 words to explain it.

PPS: Let's look at the stage all set for the 2018 Pinball At The Zoo, in Kalamazoo, where I did not even get close to doing anything good. 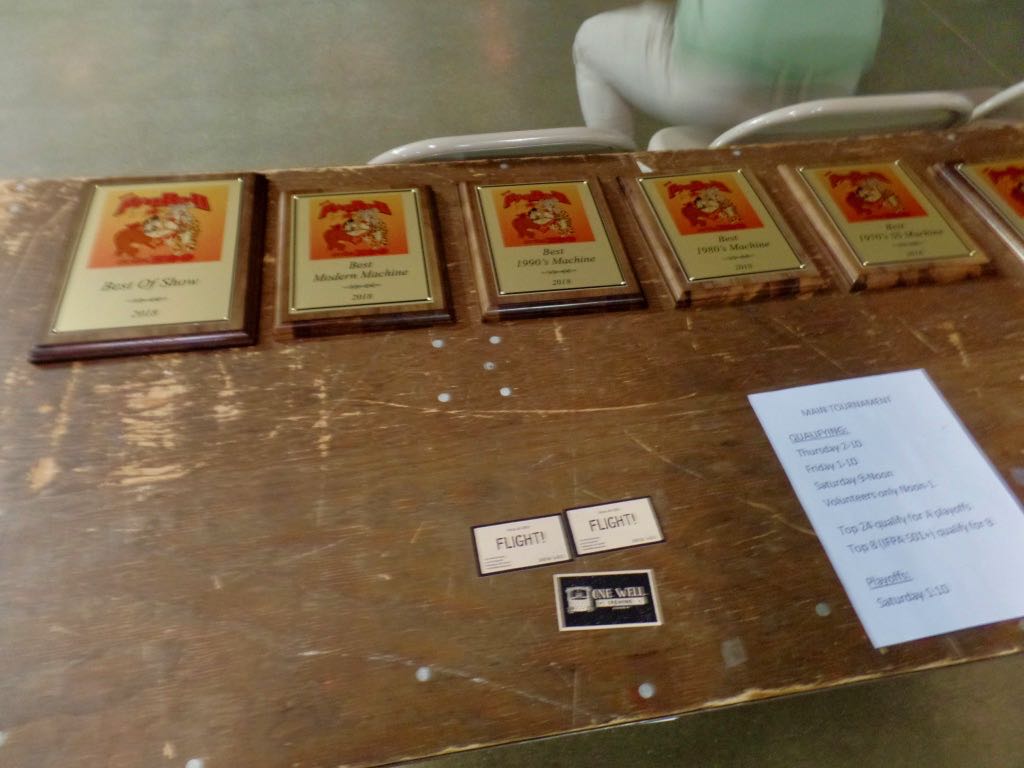 Plaques set up for the show, commemorating people who had the best show for different eras. I'm not sure if they didn't do this again for 2019 or if I just didn't notice. You can almost make out the logo for the show that year; it was a bunch of anthropomorphic animals gathered around a pinball table. I'll have to photograph the t-shirt; the only good copy of the logo I can easily find online is from Facebook. 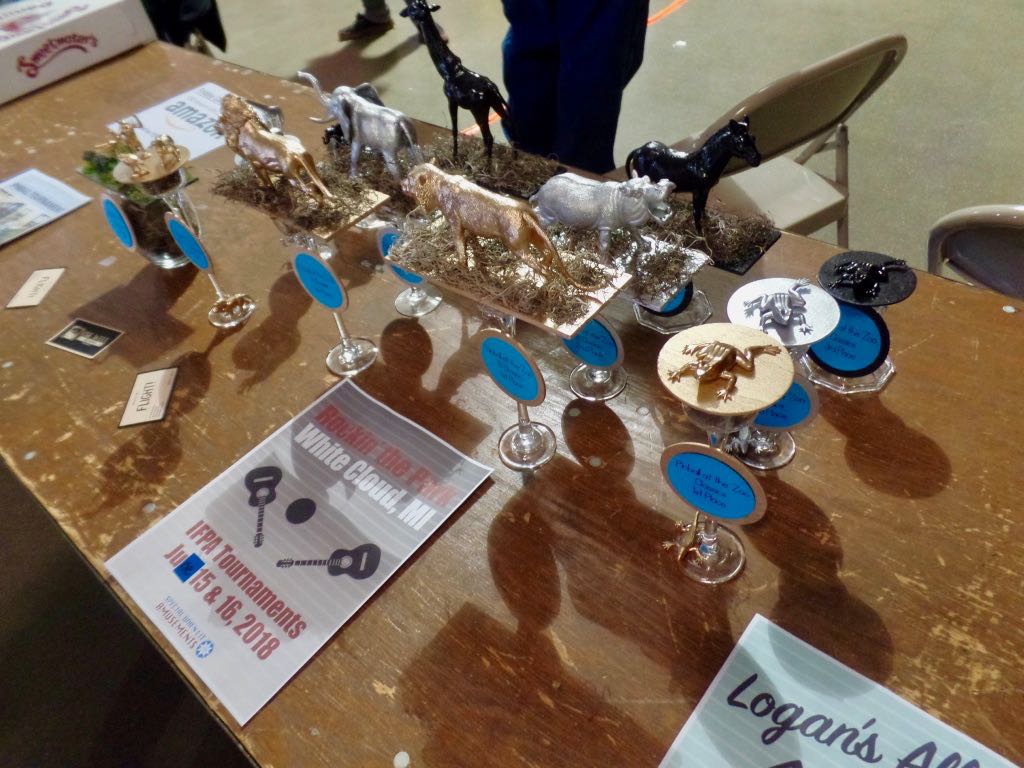 And here's the trophies for pinball play! The name of the event suggests a theme for trophies and they do their best to live up to that each year. 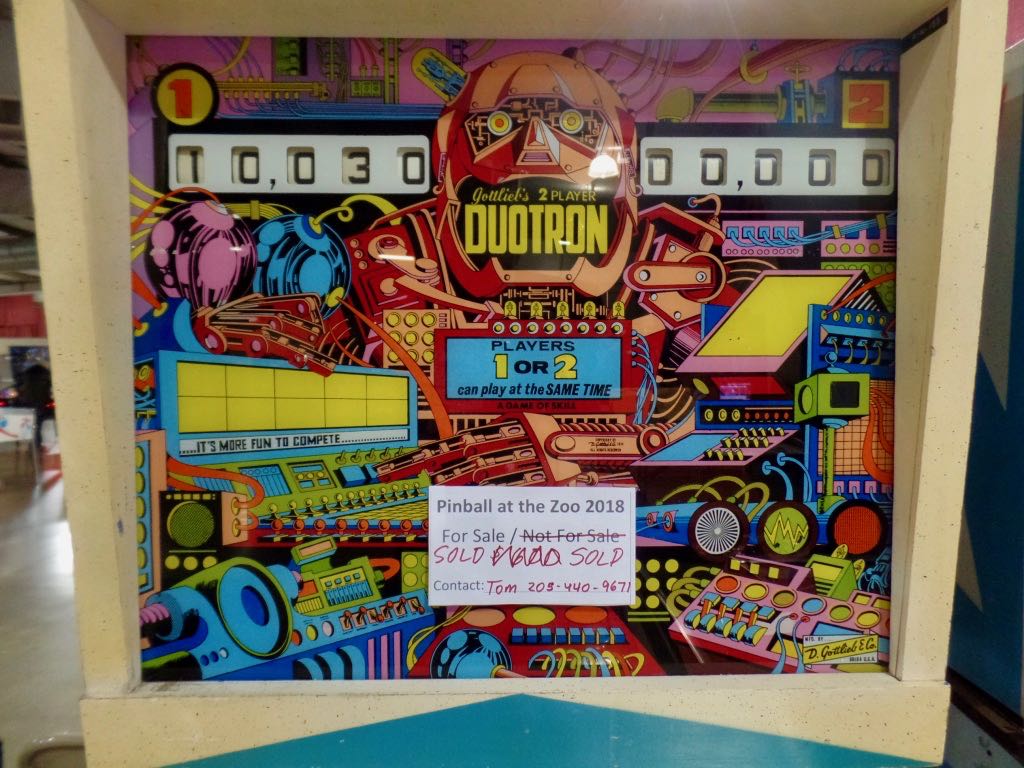 A big part of the show is people bringing games to sell or trade, or, if you're me, to go looking for freaky weird backglasses to appreciate. From this art style you might guess that Duotron came out in the mid-70s, possibly from DC Comics, but in fact it came out in 1974, from Gottleib.