So, since I was talking about stuff from this weekend you maybe guessed I'm caught up on life events here. So here's a heap of pictures from Pinball At The Zoo, 2018 edition, while I wait to have more life or enough thoughts about life for those to be worth discussing. 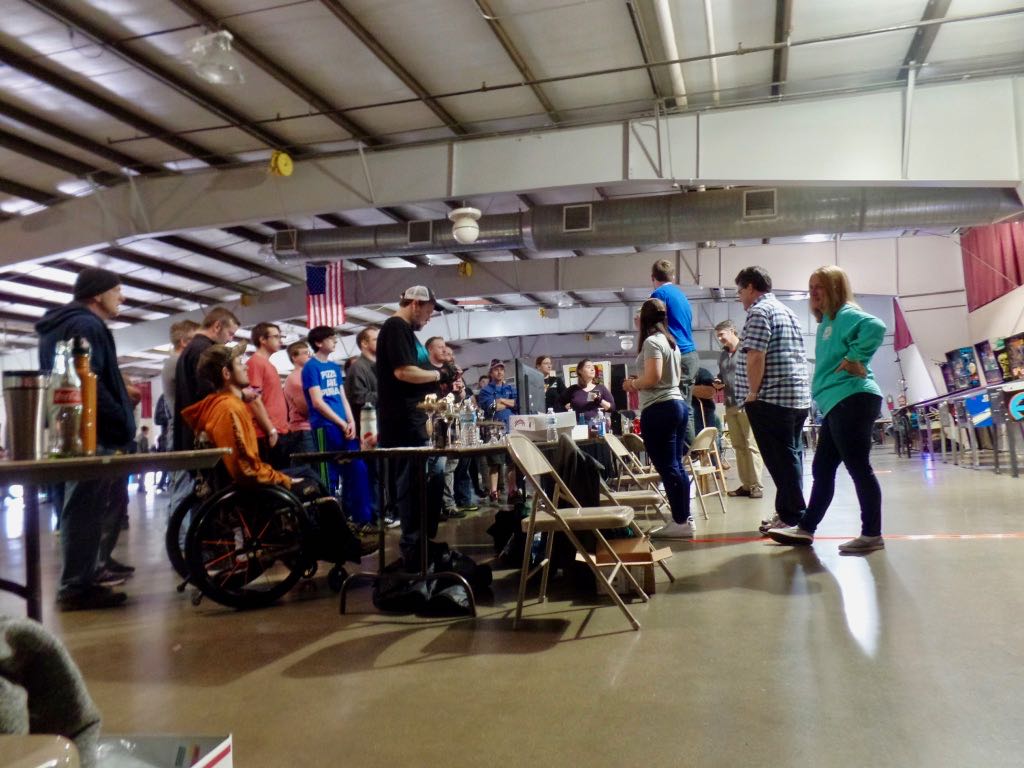 Instructions. AJH gathers people together to tell the qualifying players how the playoffs will work. Not pictured: me, because ... you know. 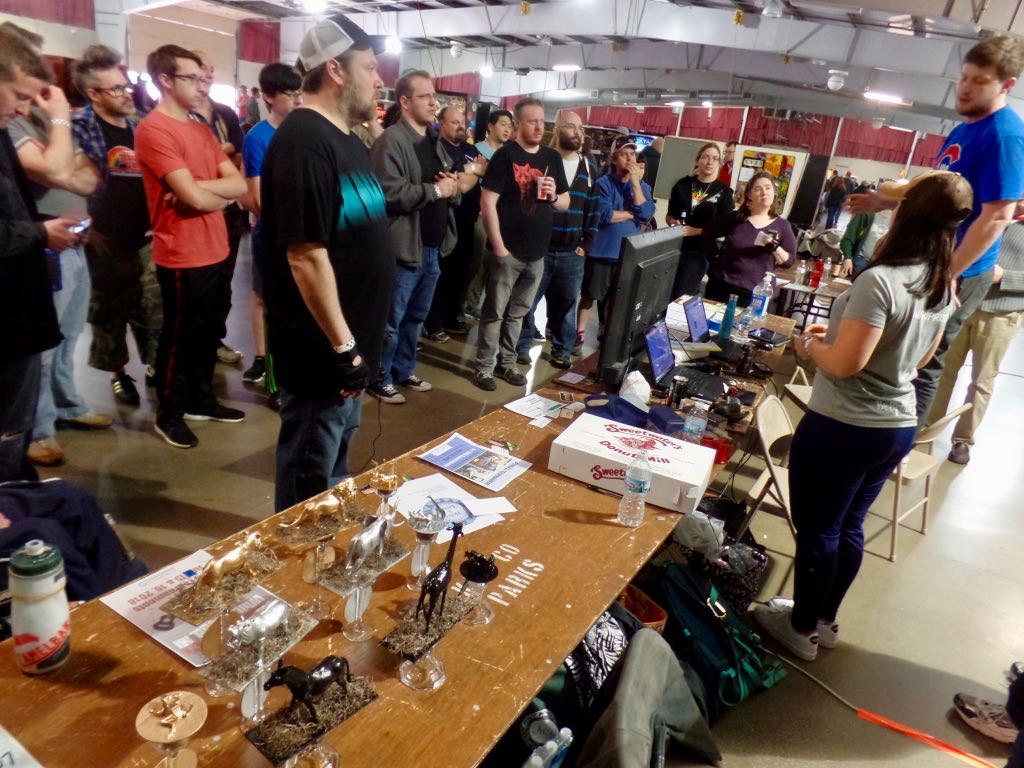 More of playoff instructions. This with a better view of the trophies and the doughnuts. 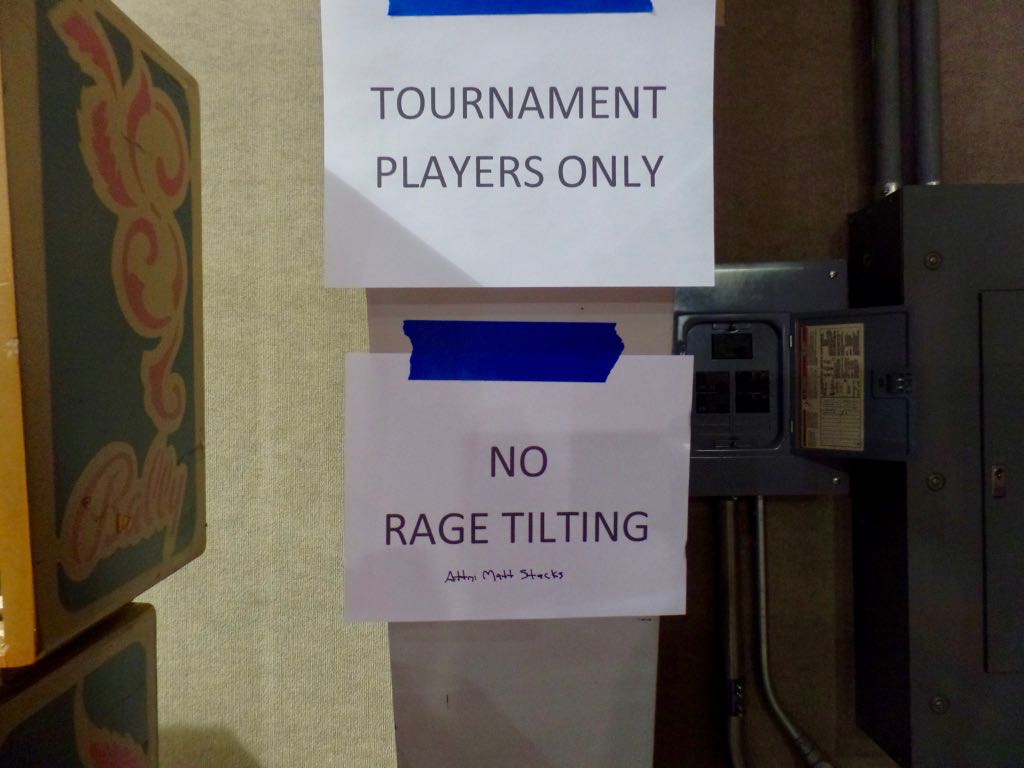 Warning signs posted to the wall. Tilting is always acceptable; part of the way you control a pinball machine is to nudge and shake and shove it to keep the ball in play, with the tilt being the penalty for doing too much. Rage Tilting, though, that's not acceptable: that's shaking the game out of frustration when there's no way you could possibly get the ball under control or into a desired place, you just need to work off your rage. Everybody does it, but it's still bad form. And, well, you see an implicit story there. It could be worse: one year a competitor was so angered at his ball drain that he punched the circuit breaker. 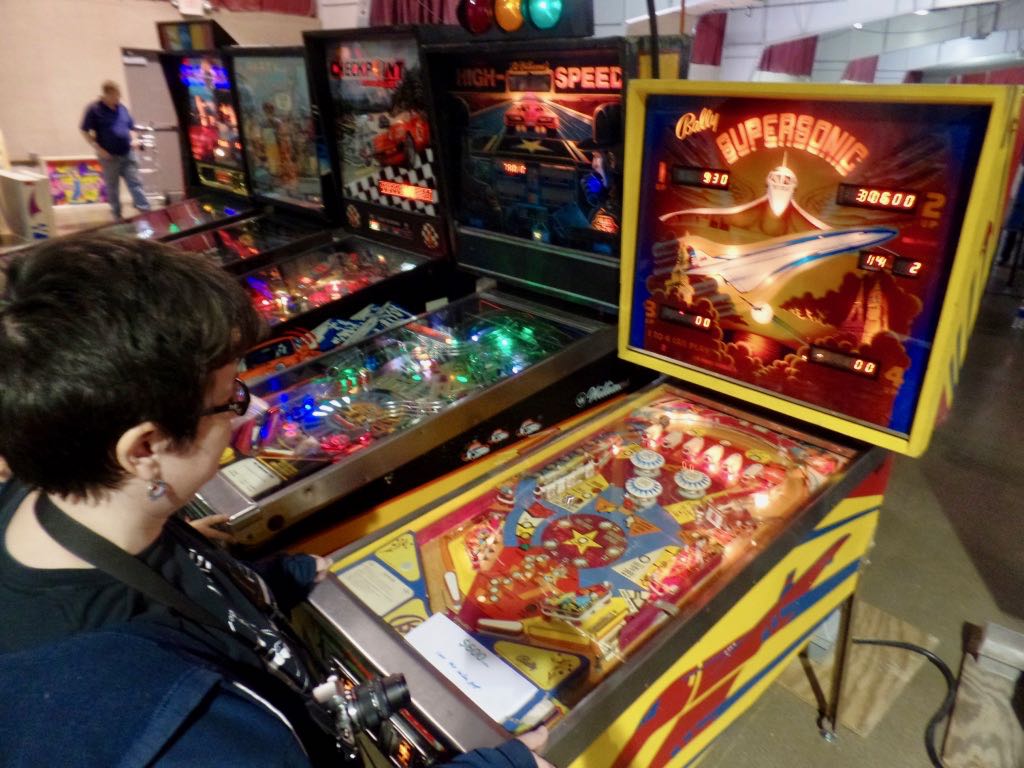 bunny_hugger, who also didn't make playoffs, discovering the charms and the graphic style of Supersonic instead. Particularly impressing her on the backdrop was how the clouds around the upper Concorde form faintly angelic wings. 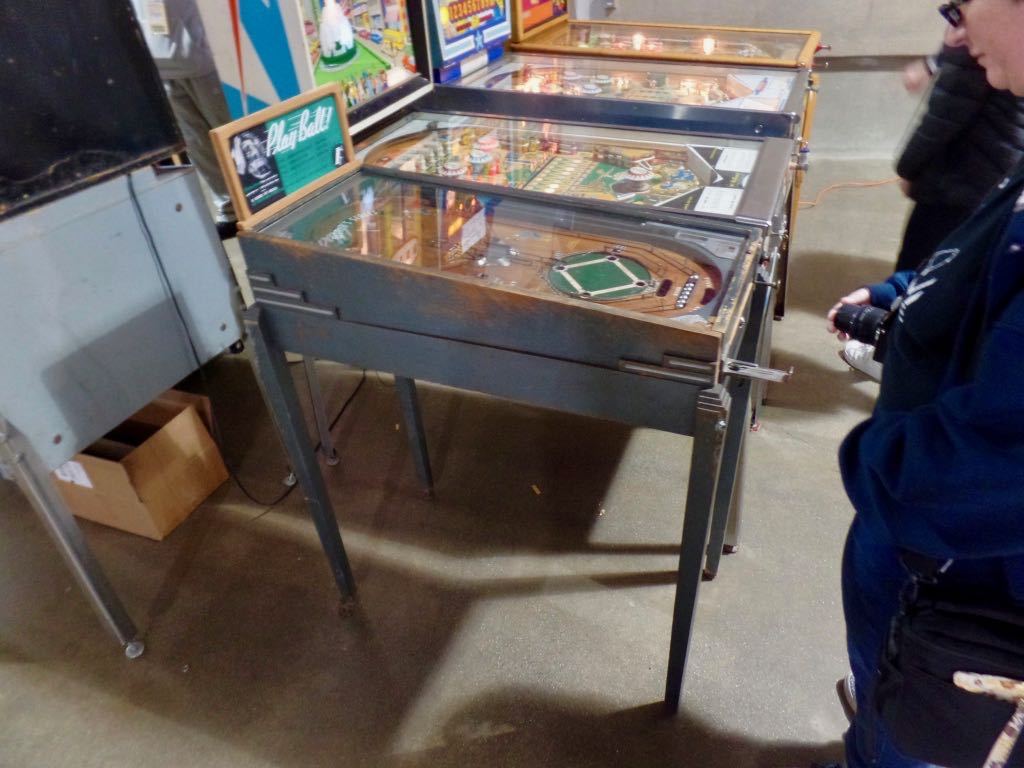 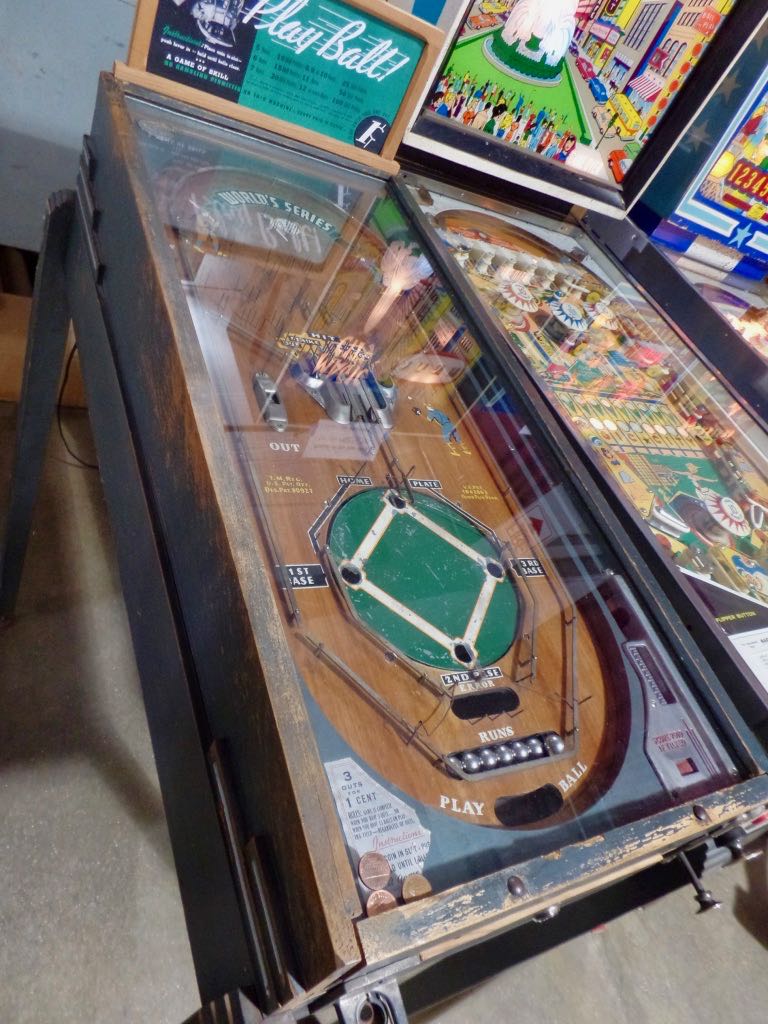 Another view of the World's Series, this after someone made a rather nice seven runs. The pennies on the lower left were provided by the game operator; it's easier than jiggering with the mechanism (and spoiling its historial integrity) to make it a free-play game. 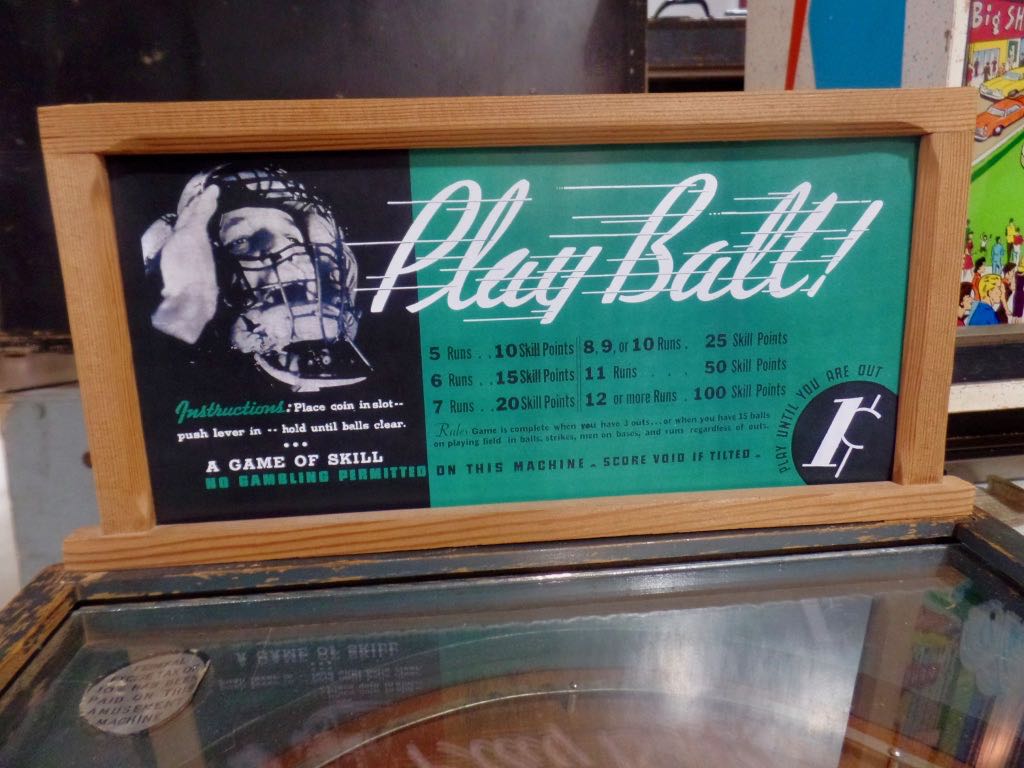 A view of the tiny backdrop, providing us with the useful information that the scoring isn't just the number of runs made but rather skill points based on the number of runs. This probably makes playing a series of games much more fun. Notice that they were insisting this was not a gambling machine even back then. Rock-Ola wasn't even seven years old by the time this game came out and it'd already had to turn State's Evidence against Chicago gangsters. 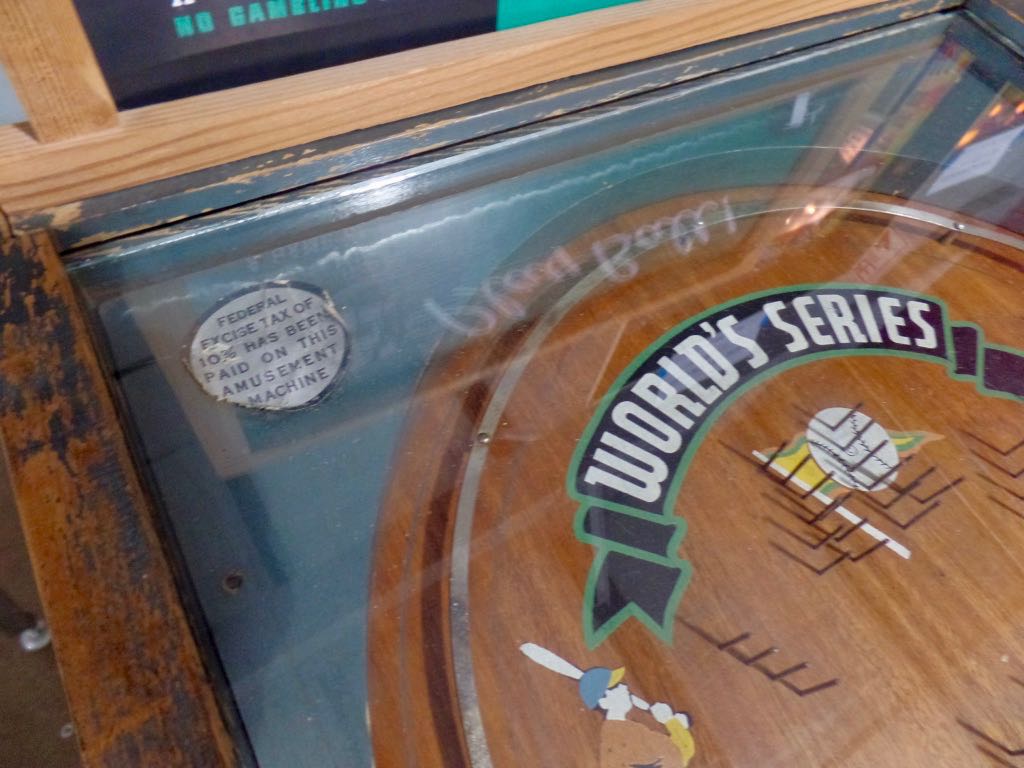 Sticker on the upper left that the federal excise tax was paid already. Also you see some of the strings of pins that make the game a skillful challenge. 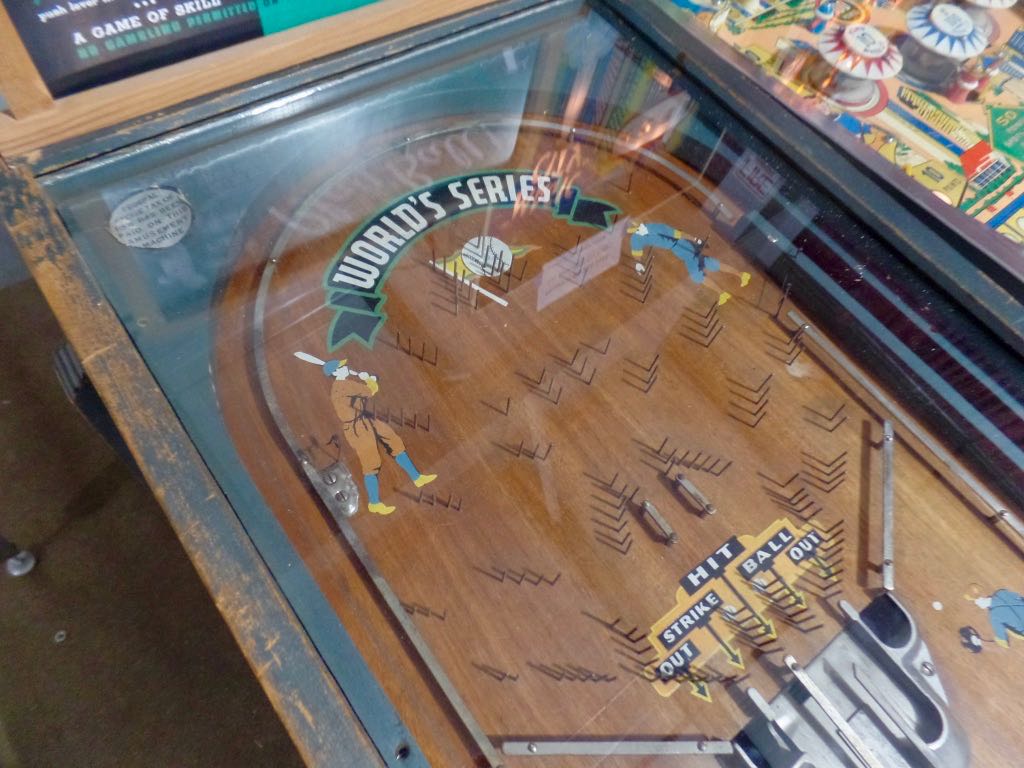 The upper half of World's Series, showing the nicely symmetric arrangement of pins that makes getting a clean hit such a challenge. 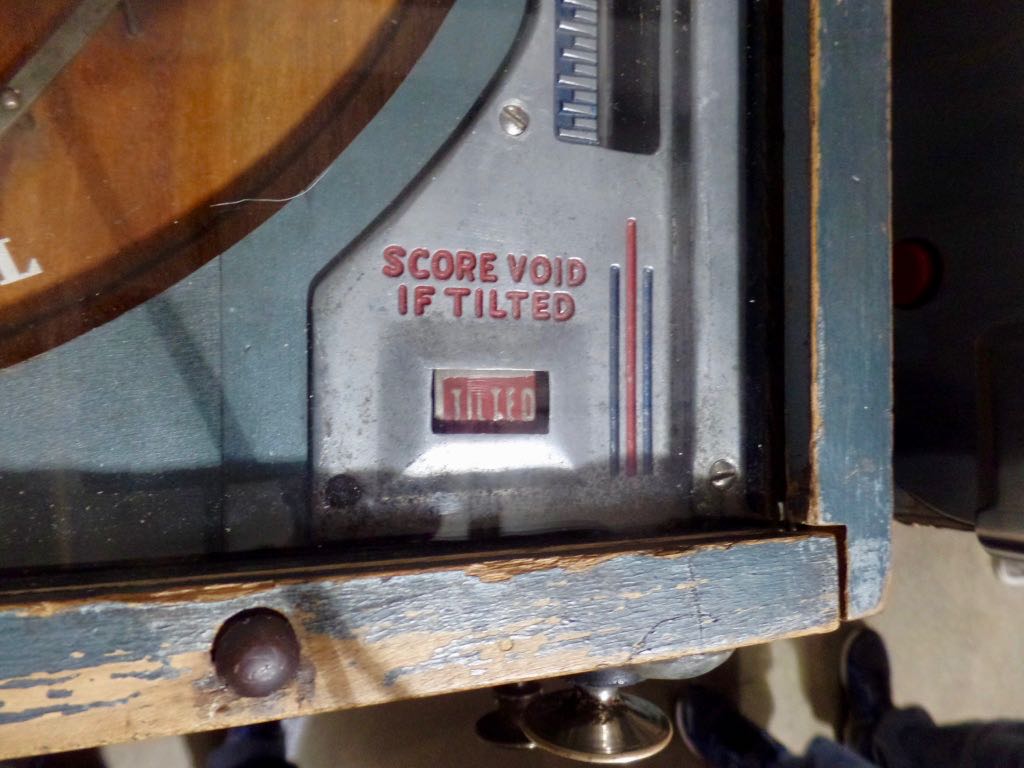 The tilt mechanism. It doesn't end the game, it just switches from green to red if the game does tilt. This warns the operator that if the player tries getting whatever the prize is for their performance that game, don't give it. 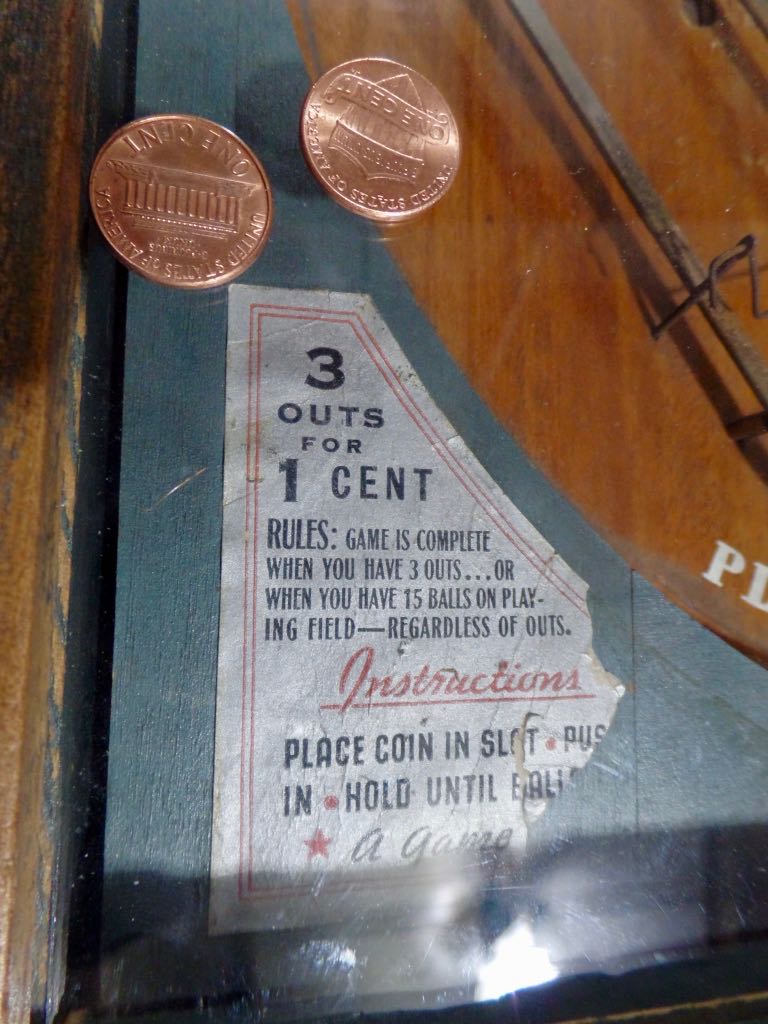 The damaged instructions sticker on the lower left of the playfield, along with the pennies that give you some idea the scale of the thing and are also good for at least two games. 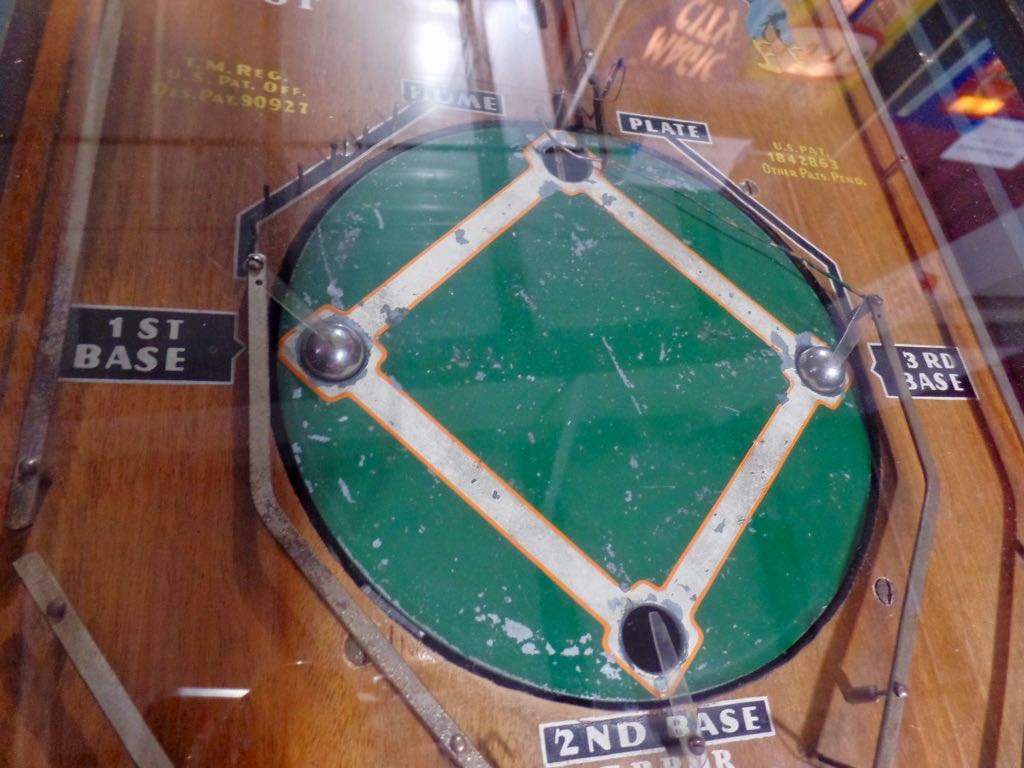 Runners on first and third, ready for a hit to bring in one runner. Note that Home Plate is at the top of the field, rather than the bottom like you'd see in most charts of a stadium . A ball rolling into the Hit lane causes the green plate to rotate 90 degrees, knocking the ball arriving at home down into the Runs trough.

PS: Exploiting My A-To-Z Archives: Infinite Monkey Theorem, bringing attention back to one of my favorite essays of all time.