Oh, I think I've reconstructed where I wanted that essay about Sunshine to go. While we haven't seen her make more binks, she has been nice and energetic and cheery. And a couple days ago she was making flying leaps toward

bunny_hugger. These were big and broad things that looked like a squirrel hopping between tree branches. It's wonderful watching her with that kind of energy. That's probably about where I was going.

Also a couple days ago The Phone Company sent someone out to work on the line outside our house, and got it into good working order. Which is great although it was after the phone was already working again. The Phone Company's guy was doing some trimming of branches near where the telephone line branches off to connect to our house, so perhaps it was something where service had become marginal and now it should be reliable. We'll see. 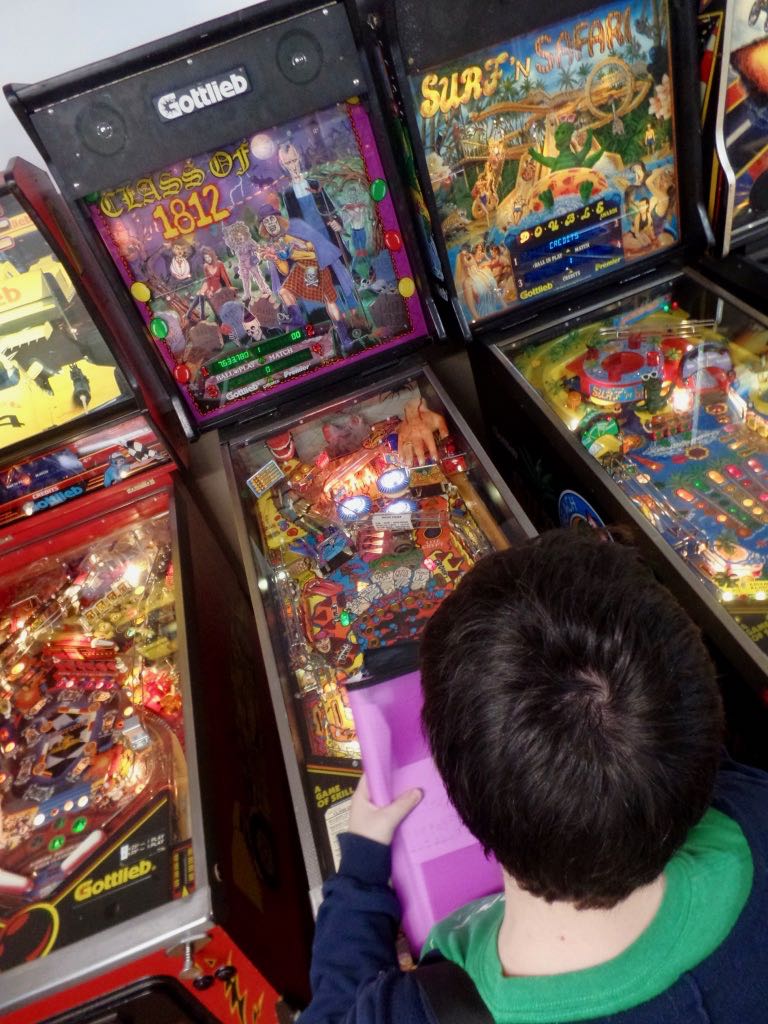 bunny_hugger getting down to some serious gaming, so far as that can be said of any 90s Gottleib weirdness: Class Of 1812, renowned because its multiball, which you can get by pretty much just playing the game, features an all-chicken refrain of the 1812 Orchestra. 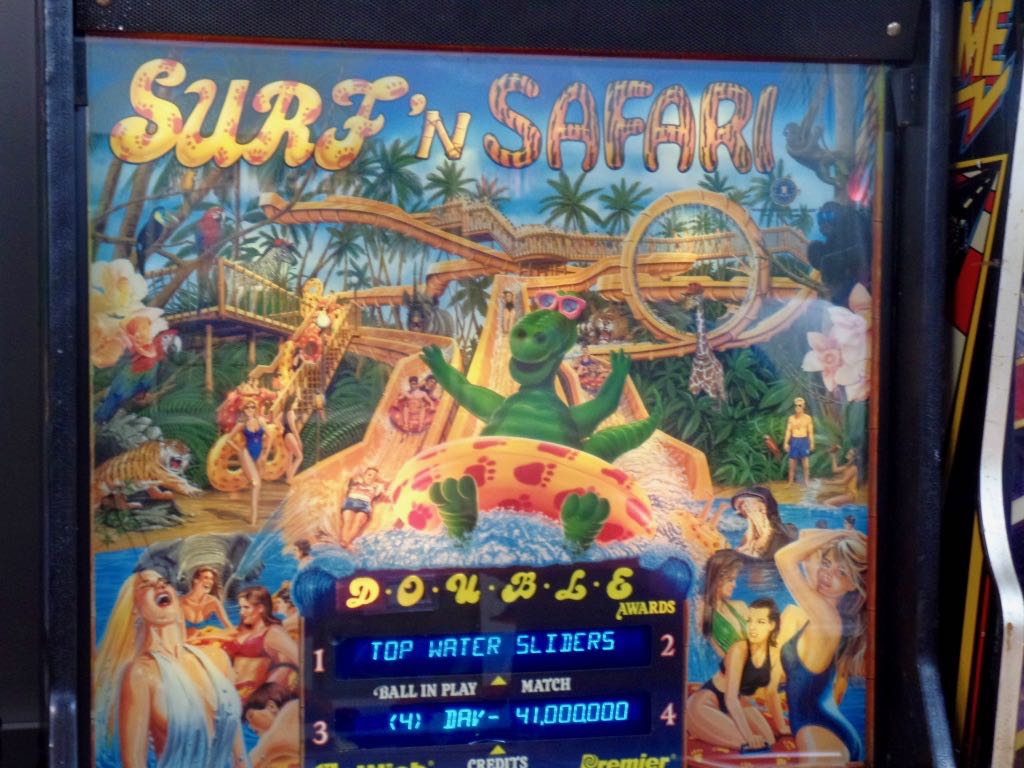 Backglass for the water-park-themed Surf 'N' Safari, another of those weird 90s Gottleib games. 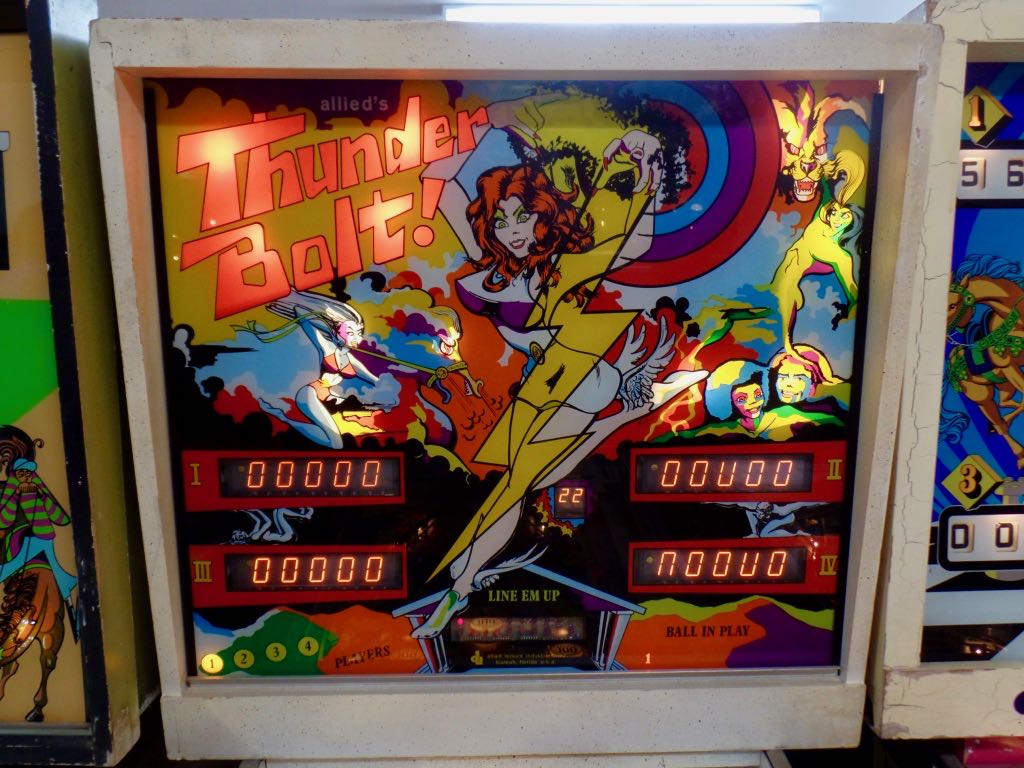 Allied's Thunder Bolt, which has a great backglass where I don't quite understand what's going on, but that's all right. It looks like a great comic book at least. 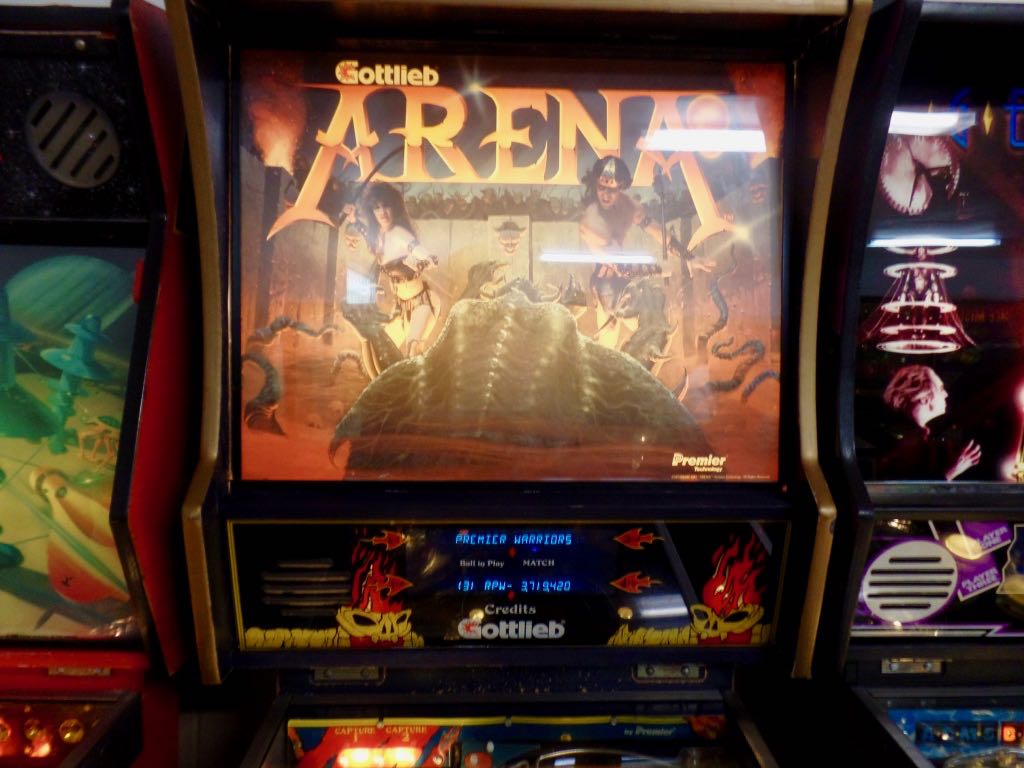 So for a while there Gottlieb got into using quasi-photographic backglasses for its games, accidentally making them look like the posters for movies made to go direct to basic cable. 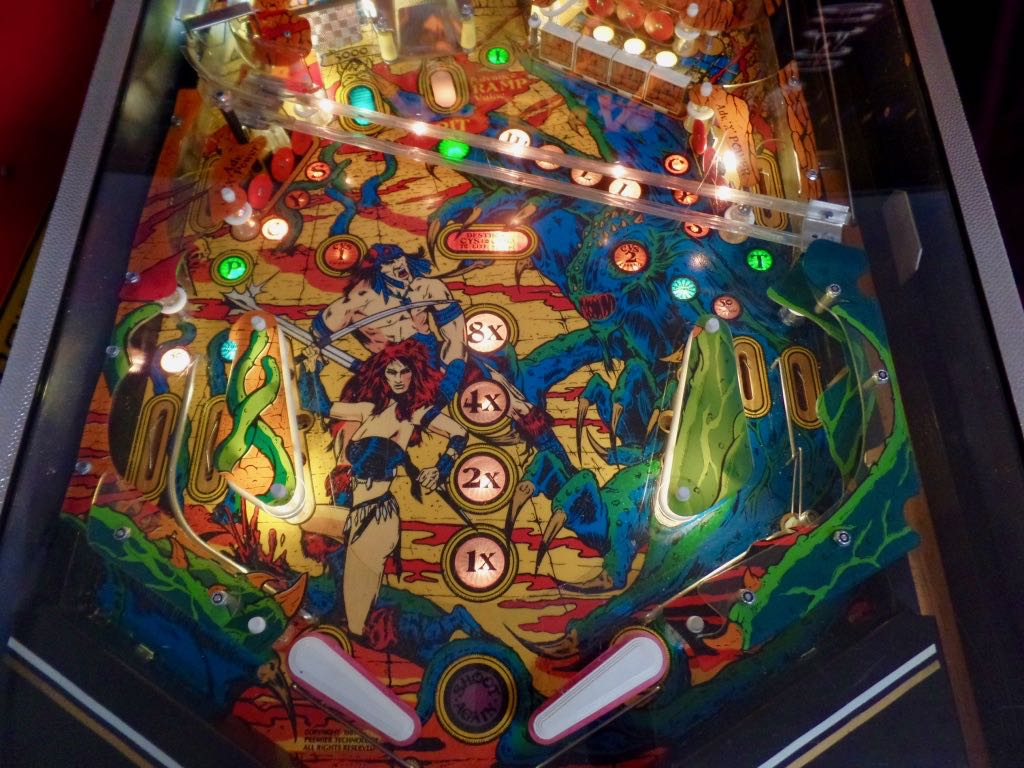 Lower playfield of Gottlieb's Arena, which is certainly in a vein with the late 70s swords-and-sorcery genre of pinball art while being of the 80s. bunny_hugger had a good game of what is either Robo-War or Warning ... Robo-War. And hey, the backglass looks like every science fiction novel from 1984, that's a bonus! 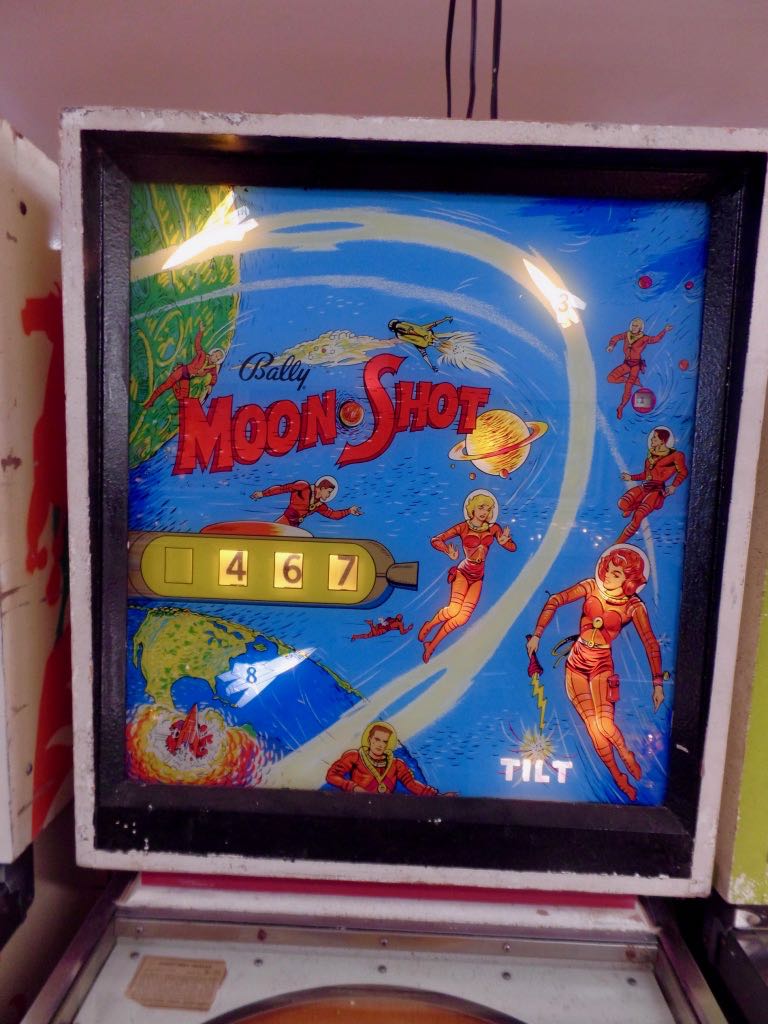 Bally's 1963 Moon Shot, a nice example of that era for pinball backglasses. Also of historical significance: it was the first pinball machine, rather than bingo machine, that they'd made in five years. Bingo machines had finally been ruled illegal as gambling machines on the flimsy premise that they totally were. 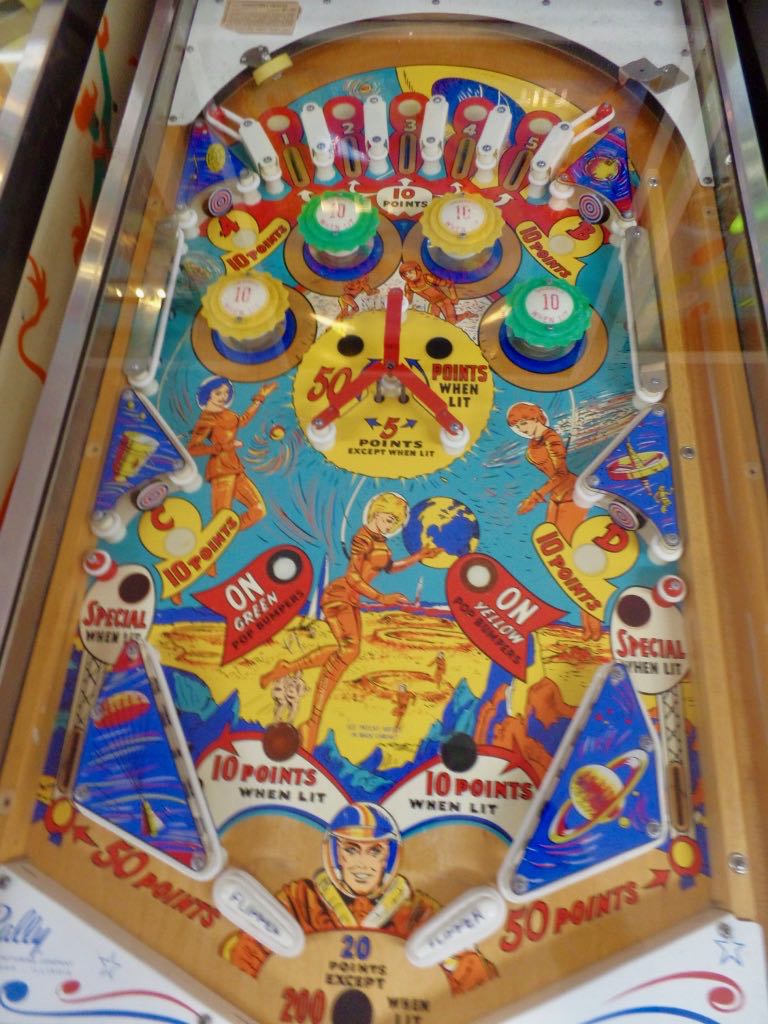 Layout for Moon Shot, which has busy enough art you almost don't notice nothing's in the lower half of the game there. 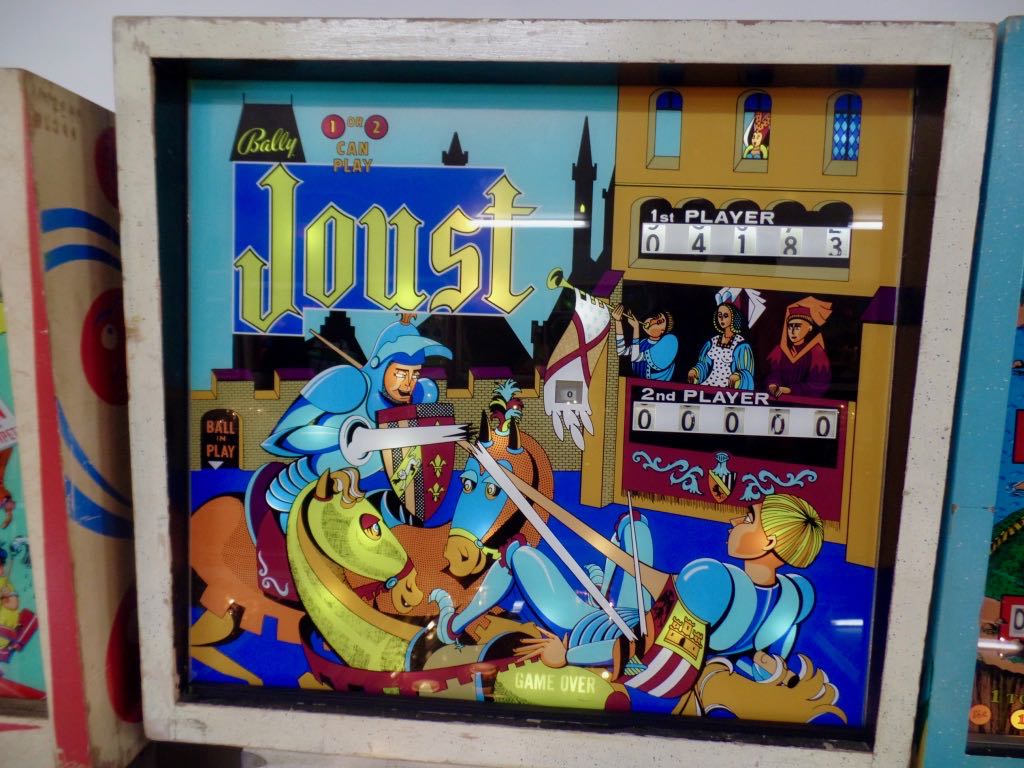 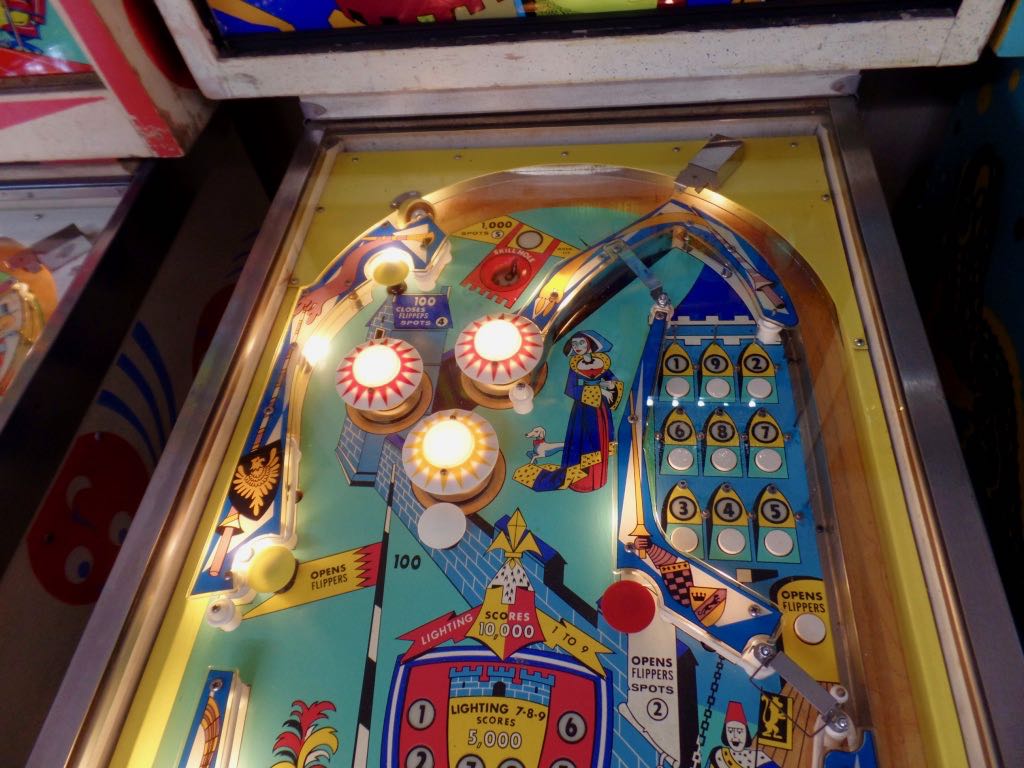 Joust's big gimmick, in the upper right corner of the field: nine rollover targets --- not numbered in order --- and which can get you closer to completing the hit-all-the-numbered-targets objective of any electromechanical game. 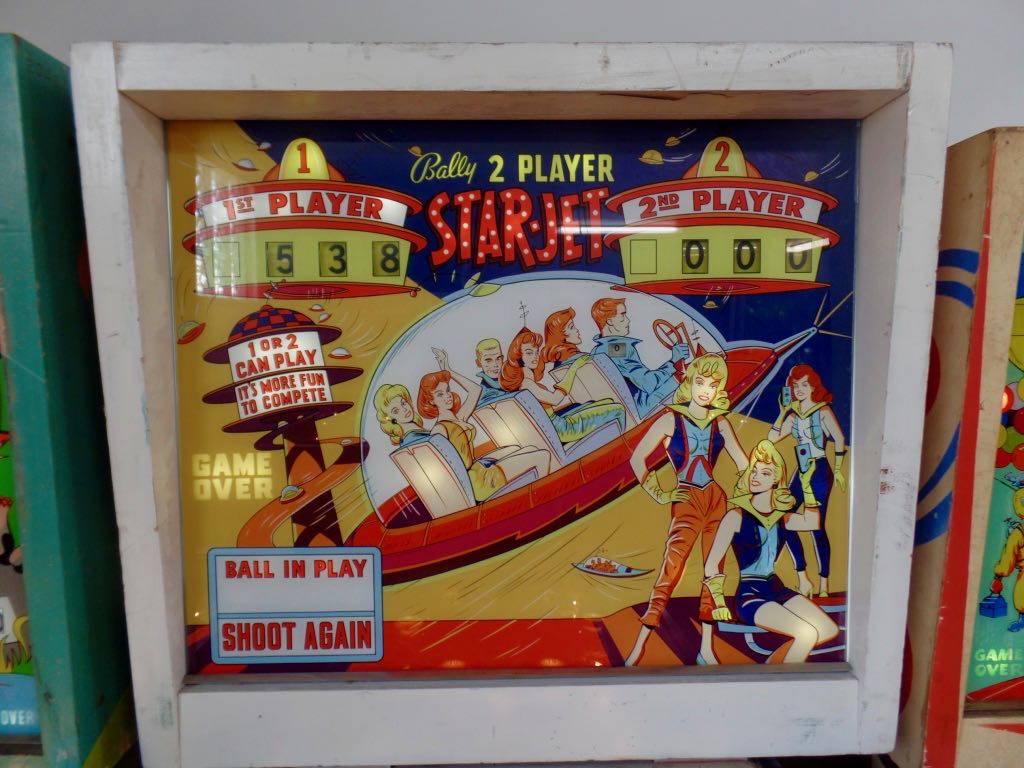 Bally's 1963 Star-Jet and what is definitely not an unlicensed Jetsons game. 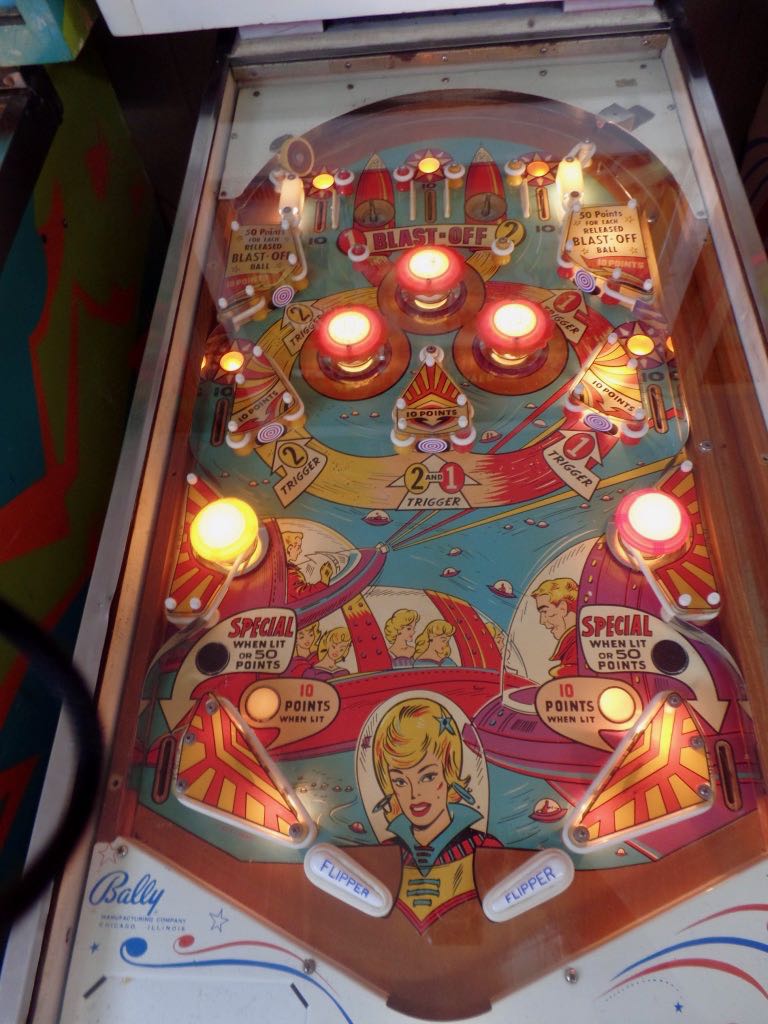 Playfield for Star-Jet, which is wonderfully symmetric in that 60s way.

Trivia: British laws of the 1780s prohibiting the emigration of skilled artisans subjected emigrants to the loss of property and citizenship; recruiters to a fine of £500 and twelve months' prison; and shipmasters, £100 fine for each passenger illegally leaving Britain. Machine exports were a fine of £200, or £500 for textile machines, in addition to a one-year prison sentence. Source: Smuggler Nation: How Illicit Trade Made America, Peter Andreas.

PS: Exploiting my A-To-Z Archives: Local, another of those terms that you almost don't need to define, and that I spent a thousand words on anyway.