Now back to the land of Grand Rapids and prowling around their exhibit about mythical creatures, including but not limited to dragons, mermaids, and unicorns. 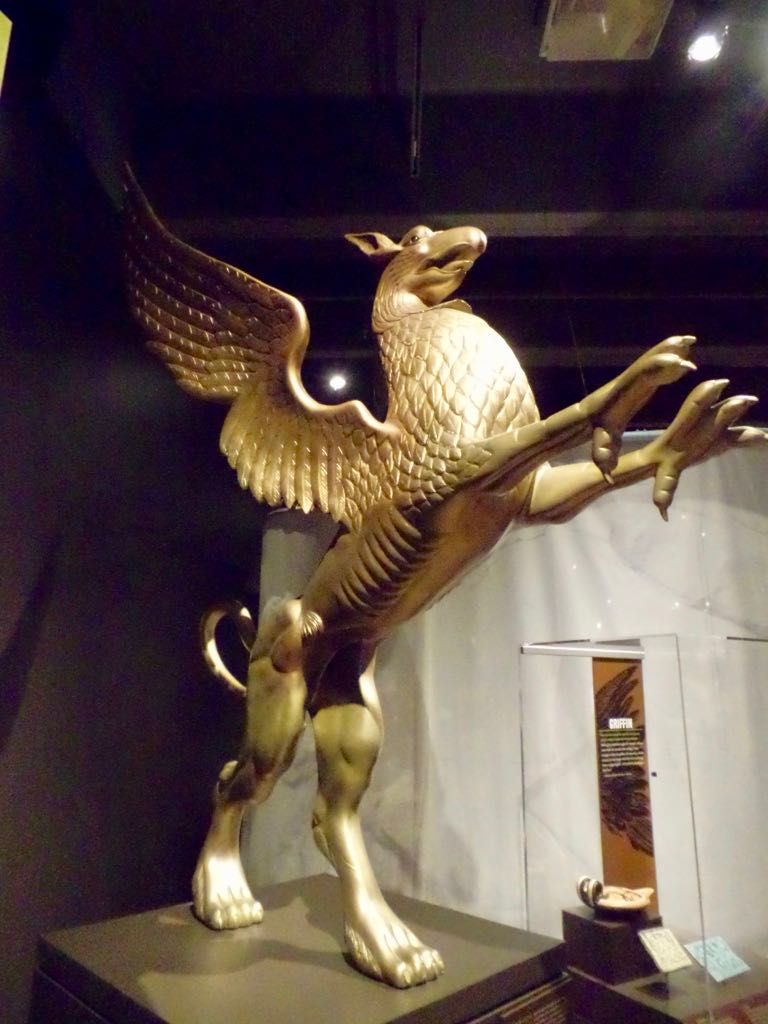 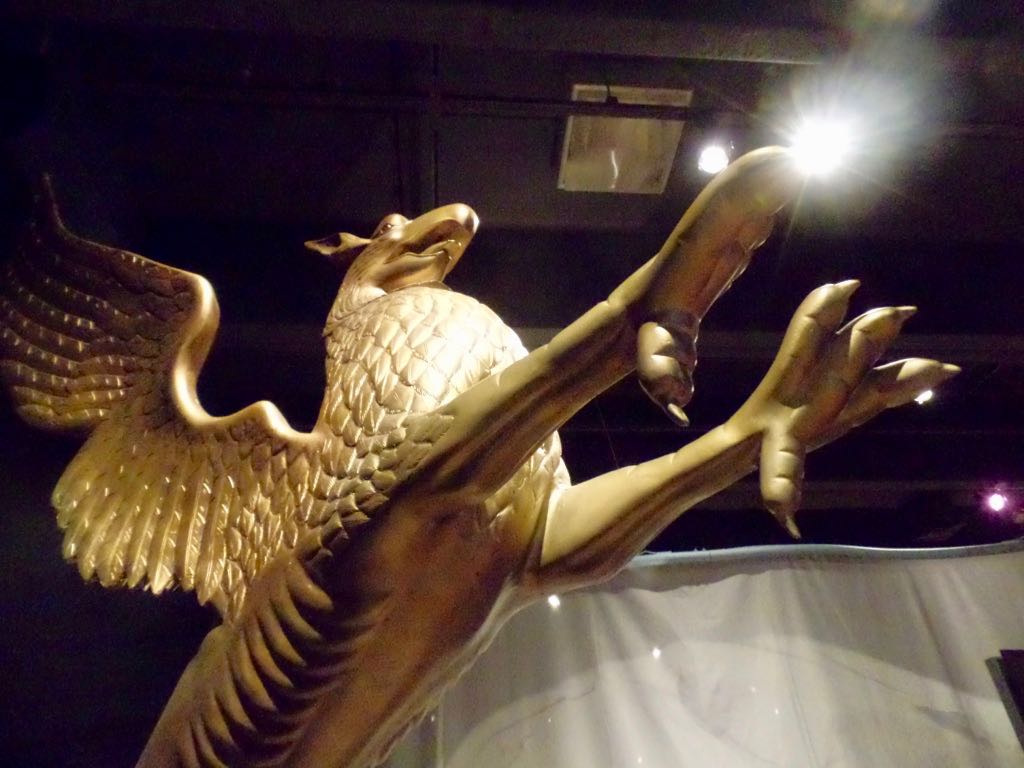 The gryphon statue captures a ball of light in its right foreclaws. 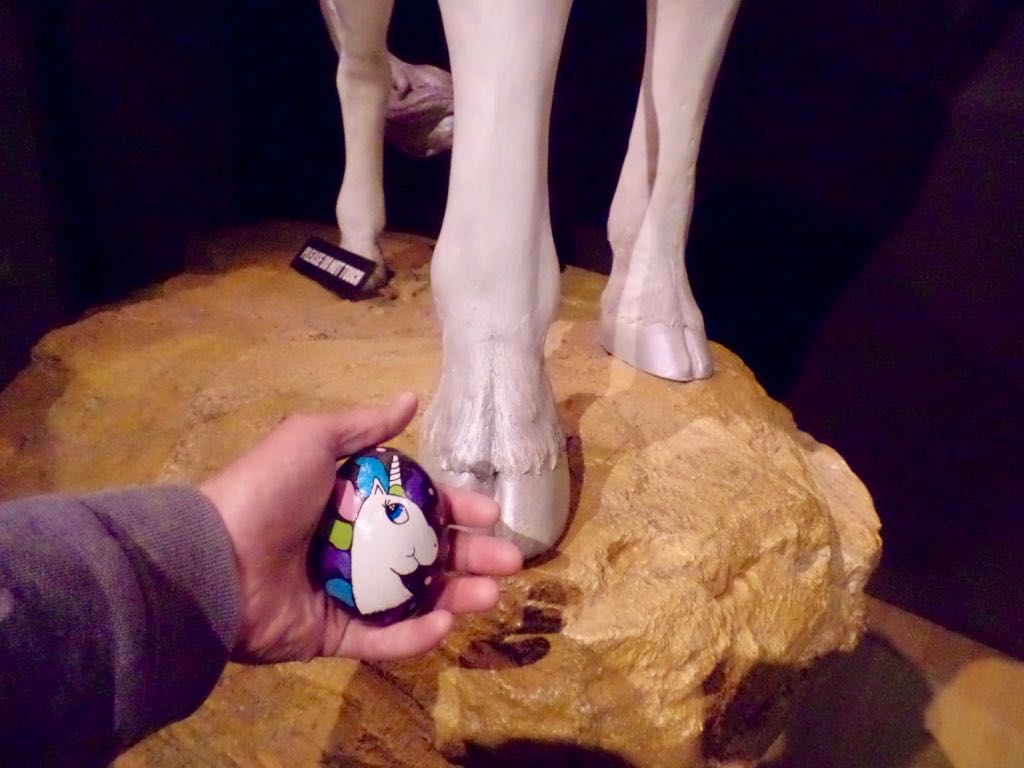 And behind the unicorn she discovered this: a painted rock! 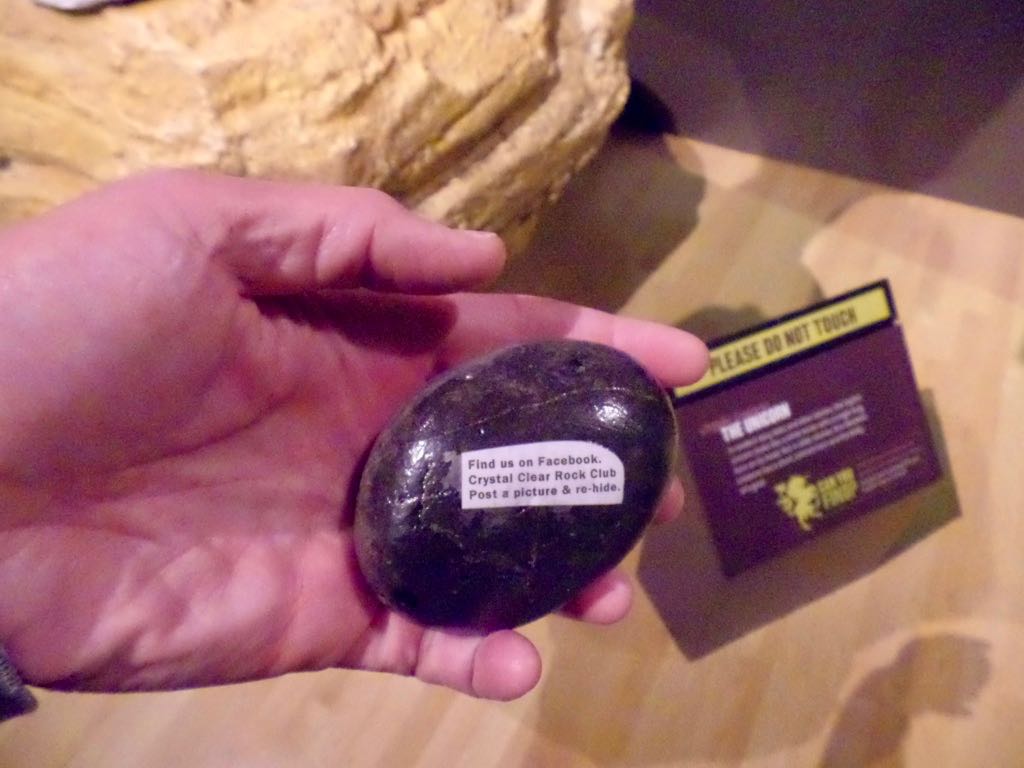 So it turns out, in a wonderful parallel to letterboxing and geocaching, there's some kind of rock club which hides painted rocks near sites of interest and urges people to find them, photograph then, and re-hide the rocks. Who doesn't love a secret society like that? 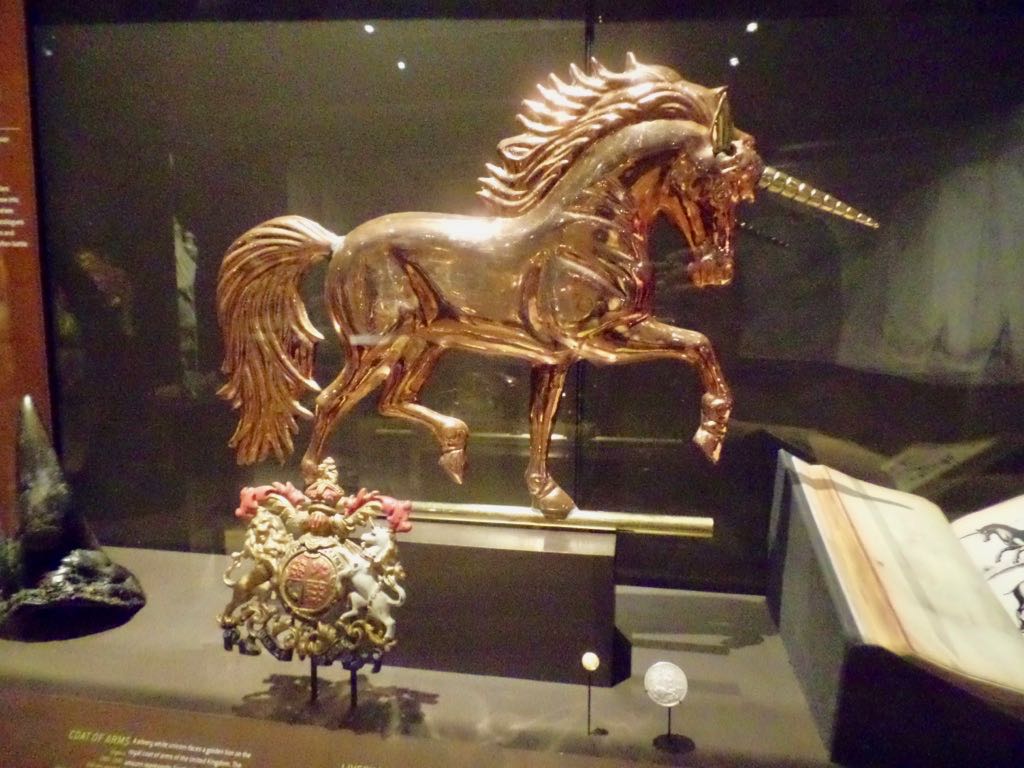 Here a nice shiny statue convinces us of the existence of metal unicorns. 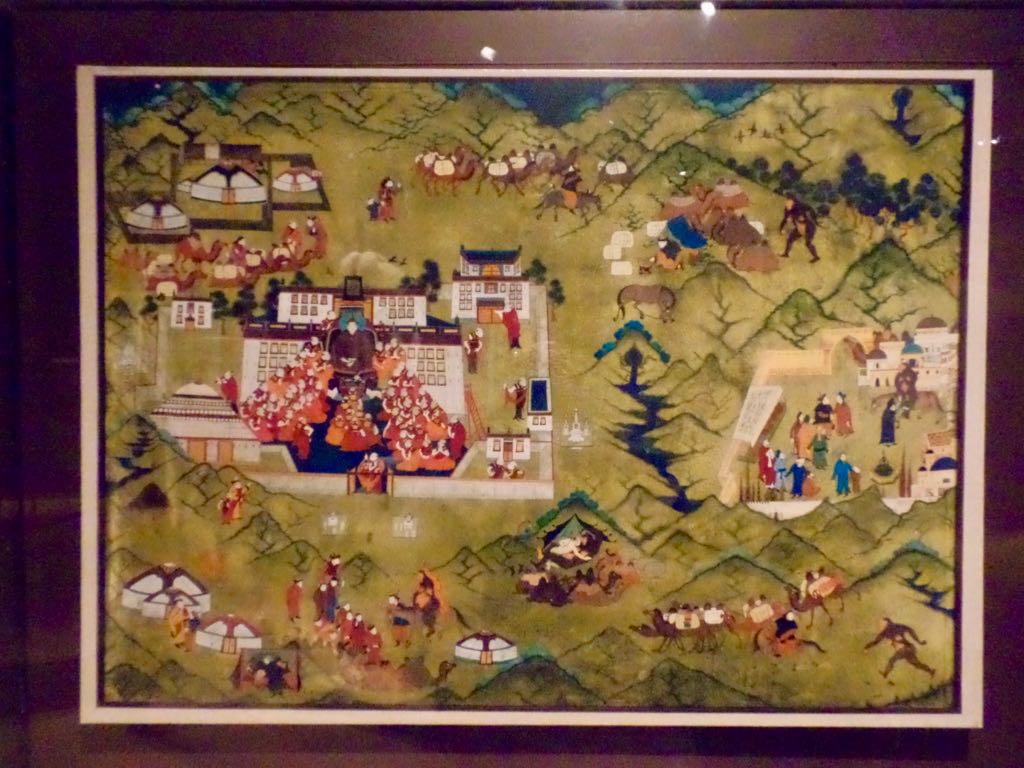 A mural which tells a legend of a village and their encounters with a Bigfoot-type creature. If I remember right the story is to be taken as the scenes read in clockwise order, ending up inside the village at far left. 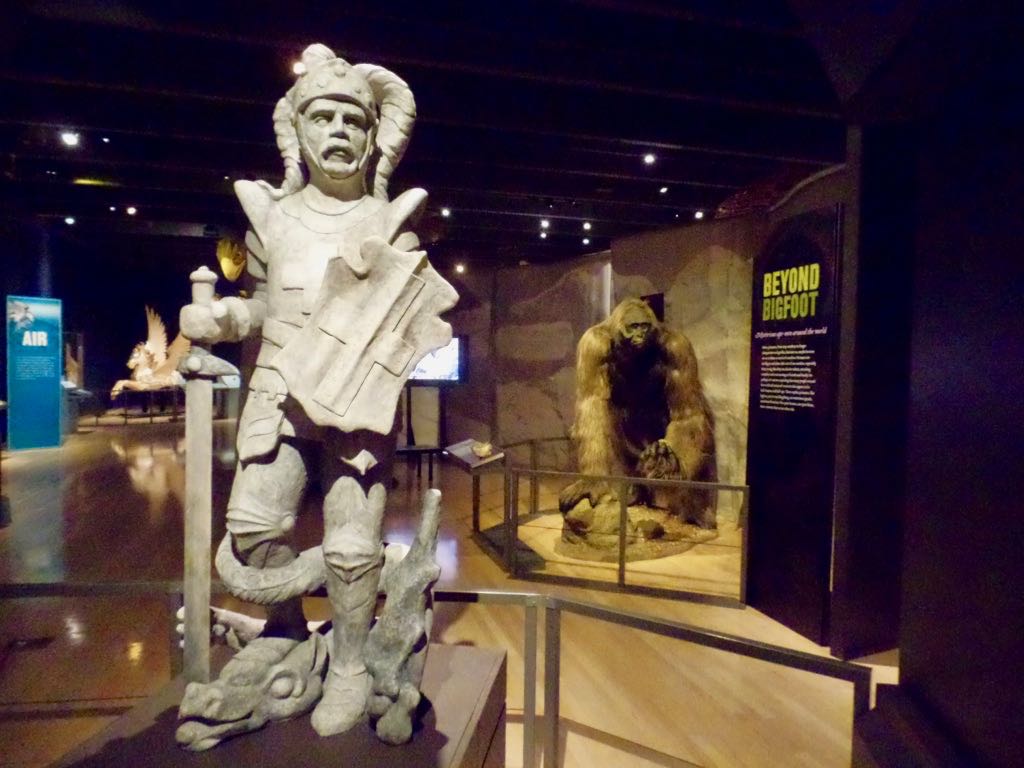 A Saint George statue, and the tease of Bigfoots (Bigsfoot?) to come. This activity puzzle encouraged you to rearrange bones that looked like an actual fossilized animal to resemble a mythical animal. The 'fossils' were magnetized pretty heavily to the plate and were not easy to manipulate, though. 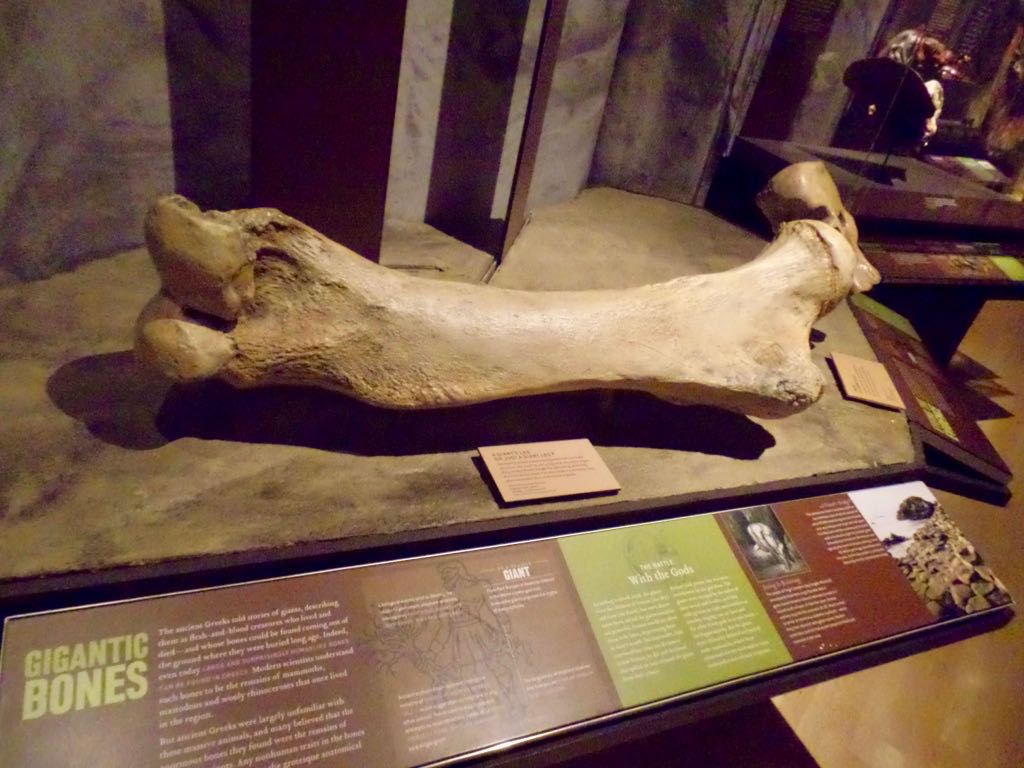 A gigantic replica bone used to demonstrate something about the plausibility of believing in giants. 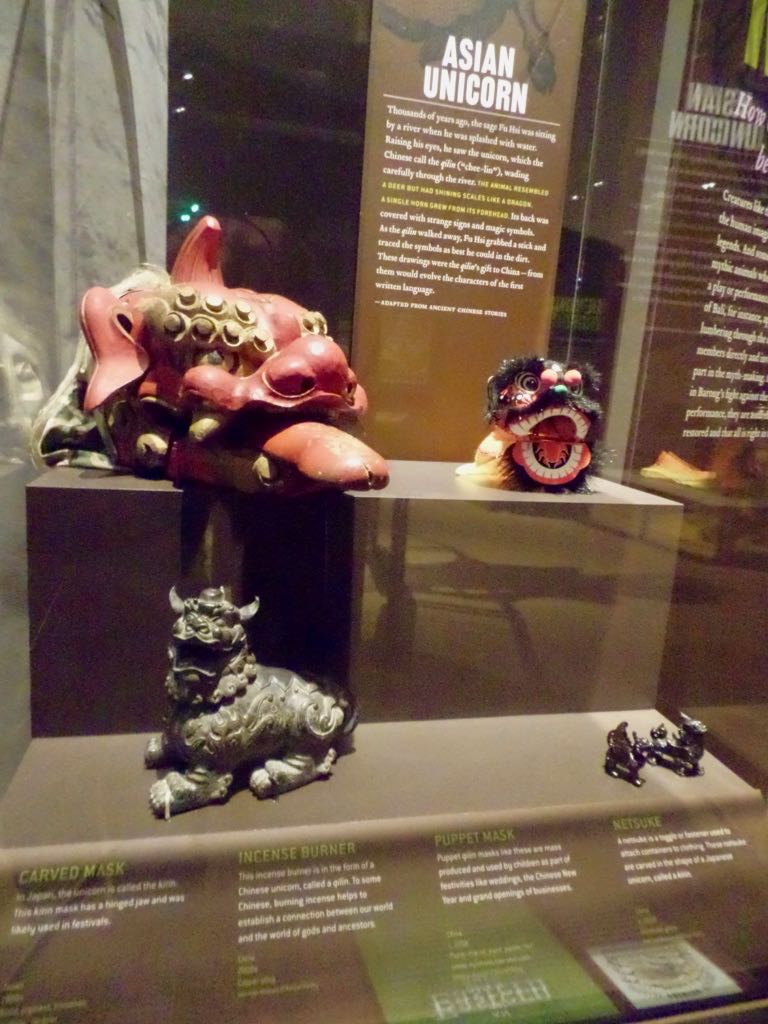 Now we move into the Asian Unicorns, with a couple little statues and incense burners and puppet masks and all. 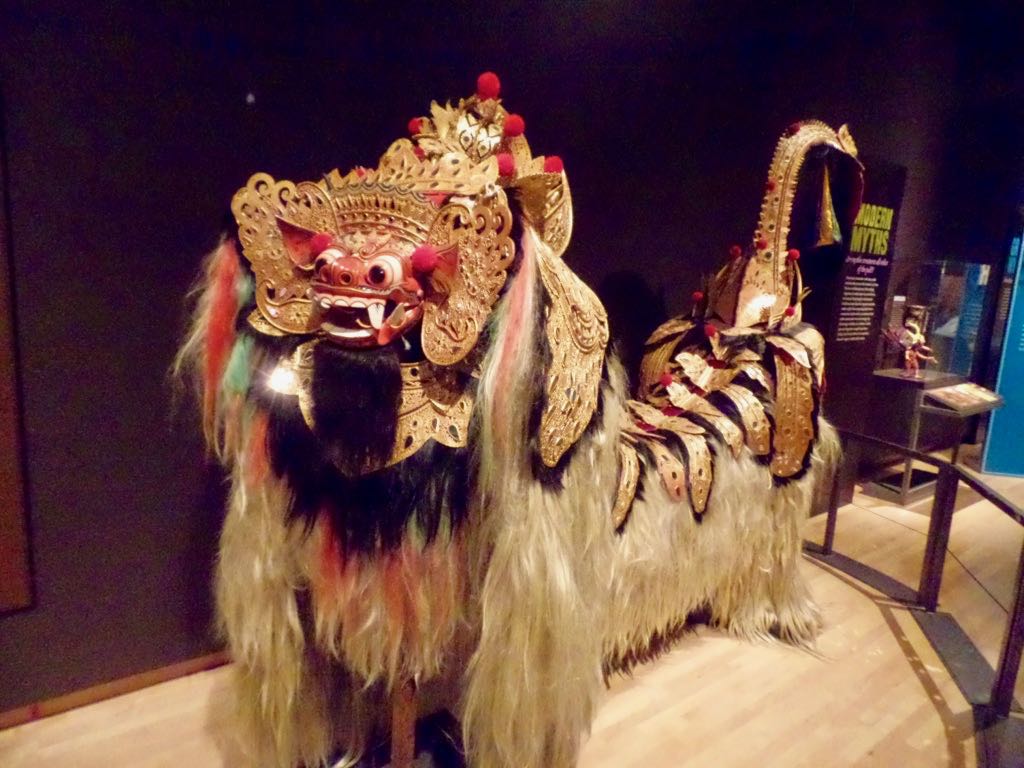 Here's a figure of a Barong ket, chief of the barongs, a Balinese spirit of kindness and protection. 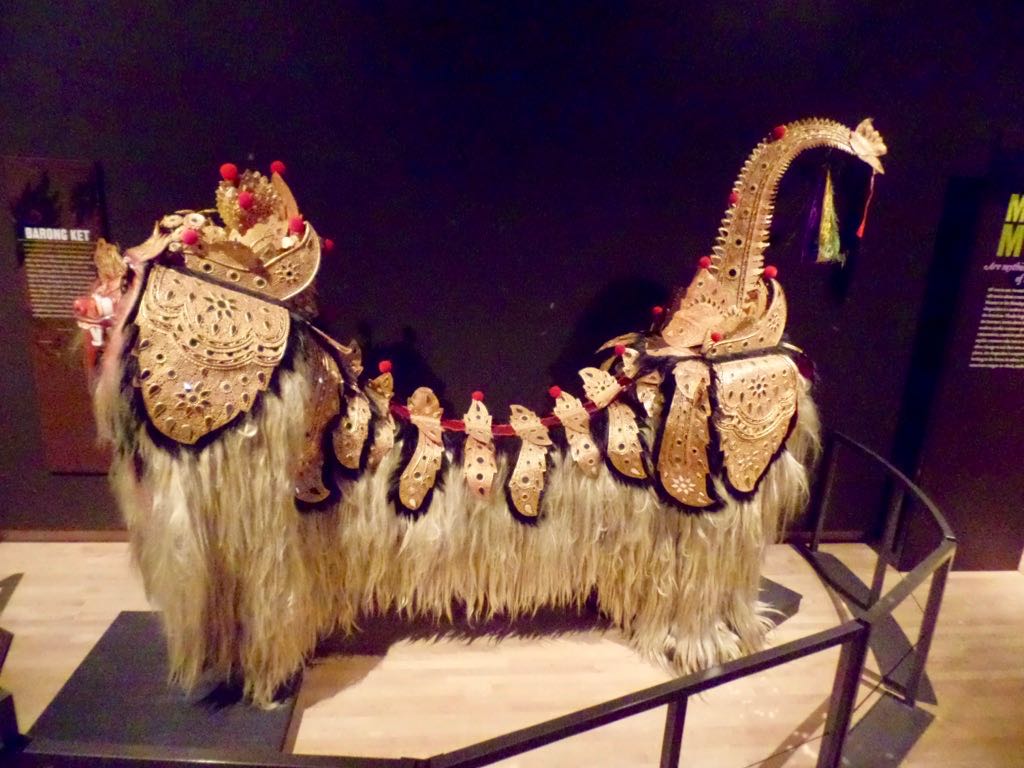 And as much as we wished to be respectful to a figure of religious and cultural importance it still gave me the feeling that I was looking at a wonderful and loving and delightful puppy-like giant Muppet creature.

Trivia: About two-fifths of Zeppelin crews in World War I died, one airship being lost for every eleven missions. Source: Taking Flight: Inventing the Aerial Age from Antiquity through the First World War, Richard P Hallion.

Currently Reading: New York Sawed In Half: An Urban Historical, The True Story of What May or May Not Have Been the Greatest Hoax Ever Played on the Citizens of Gotham, Joel Rose. So he saves for an epilogue the punch line that I knew because of how I came across the book in the first place, that the only thread of evidence that this hoax, about the effort to save a sinking Manhattan by cutting it in half and rotating the lower end around, is a possibly tall tale told to a kid. There's hints given in the body of the text, by talking about other hoaxes of the 19th century including, yes, Barnum's Feejee Mermaid (and Fake Cardiff Giant). But it's only at the end that he admits that all the historical scenes he was painting were his imagination, and it leaves me wondering what the heck I just read. Like, I love nonfact pieces, fiction presented in the mode of fact, but this is weird because it uses the form of a narrative history to tell a thing that certainly didn't happen, just we don't know on which level it didn't.

Exploiting my A-to-Z Archives: Normal Numbers, which are everywhere but we can't find them.