At the start of October, Kings Island shocked us with an announcement. They were closing the roller coaster Vortex at the end of October. This is a roller coaster they built in 1987. It's the era of the megalooper coaster, when Arrow Dynamics discovered they could use the tubular steel track of mine ride coasters and do crazy things with it: tracks that went upside-down, mostly, in loops that were not too terribly neck-crushing to ride. So in the late 80s parks went crazy putting up roller coasters that were almost nothing but chains of loops. Kings Island built theirs then, reusing the station from their first roller coaster named The Bat, a cute little place built to look like a haunted Scooby-Doo mansion.

The megaloopers have been disappearing. Great Adventure took out theirs, the Great American Scream Machine, at the start of this decade. Cedar Point still has theirs, Raptor, although now I've got to wonder if it might actually be the next doomed coaster in their collection. Kings Island explained the problem was that Vortex was at the end of its service life, and it just couldn't be maintained at a reasonable expense anymore. This is ... plausible. The thing about these megaloopers of the late 80s is that they were built with, by our standards, very primitive computer modeling, using the technology of mine ride coasters which are not designed to loop. It's credible that the rides would shake themselves apart. That Kings Island announced the ride would close, basically, four months ahead of time makes it plausible that they discovered some structural component was too near failure to endure another winter cycle.

When she heard the news

bunny_hugger thought: could we make a farewell trip to Kings Island? It's outside Cincinnati (sp?), the far side of Ohio ... but, we could manage a five-hour drive. It would be harder than the four-hour drive to Cedar Point or four-and-a-half to Indiana Beach, but I've managed that before. We already had planned to go to Cedar Point the weekend of the 18th through 20th, but ...

bunny_hugger's parents might be willing to watch Sunshine another weekend. If we got a little crazy we might even go down one day and come back the next, reducing how long they'd have to watch Sunshine. It would be fun to go to another park's Halloweekends event. It would be fun to see Kings Island especially as we figured we were at the end of our amusement park season.

But dull practicality held us back. The first weekend of October we didn't have time to organize anything for. Columbus Day weekend promised to be too mad, if the Cedar Point experience was anything to go by. The third weekend was already committed. The last, the 25th through 27th? Well, the 25th was right out; that was MB's Halloween party. Going down one day and coming back the next?

The problem: work. Mine, very slightly.

bunny_hugger's, more. She's at the point in the semester where she's behind on grading and returning stuff. And we were facing a boss rush of events. Reading group at school for Tuesday the 29th; pinball league the 1st of November; a double pinball tournament the 2nd; a tournament she's running this coming 6th of November; her birthday, somewhere in all this; a colloquium at school the 8th; another tournament the 9th. There just wasn't any way to schedule something so frivolous as a farewell visit to a roller coaster around all that.

So, facing that workload, after our Cedar Point trip,

bunny_hugger and I agreed that it just wasn't plausible. We couldn't schedule that much stuff in so short a while. Vortex would ride its last, and we would have to simply quietly regret that we would not see its final ride.

This would be the regrettable, but rational, and utterly sensible decision. The necessary one.

Trivia: George Wright for the 1869 Cincinnati Red Stockings reached first base on clean hits 304 times in 483 at-bats, which would be a batting average of 0.629, had the statistic been invented then. Source: The Numbers Game: Baseball's Lifelong Fascination With Statistics, Alan Schwarz.

PS: My 2019 Mathematics A To Z: Sample Space, one of those core pieces of probability worth looking at.

PPS: More of the aftermath of the Anthrohio 2018 fursuit parade. I missed whatever group photo they might have taken. 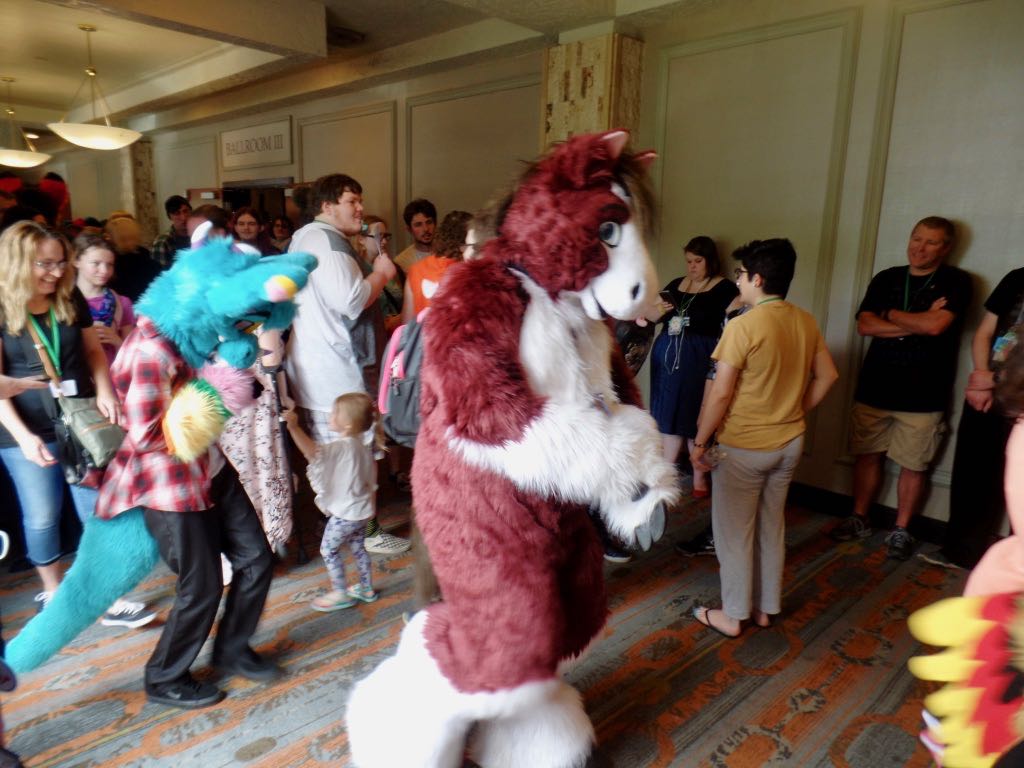 One of the several horses that're now regulars at Anthrohio. 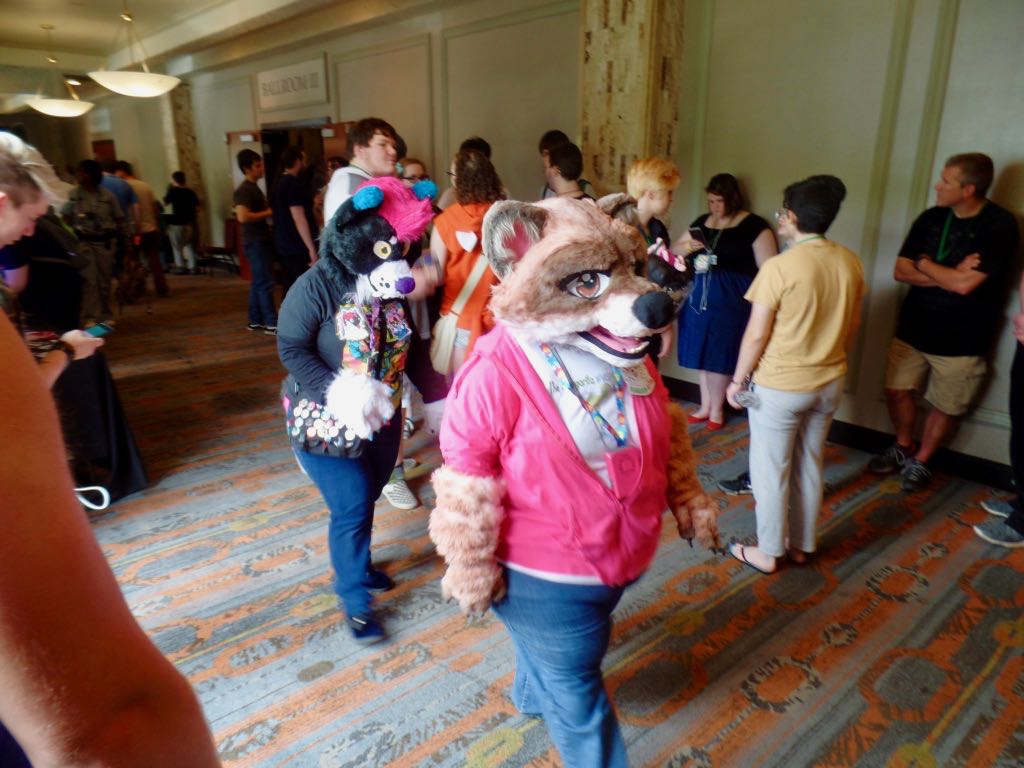 And the front side of that lighter raccoon shared a couple days ago. 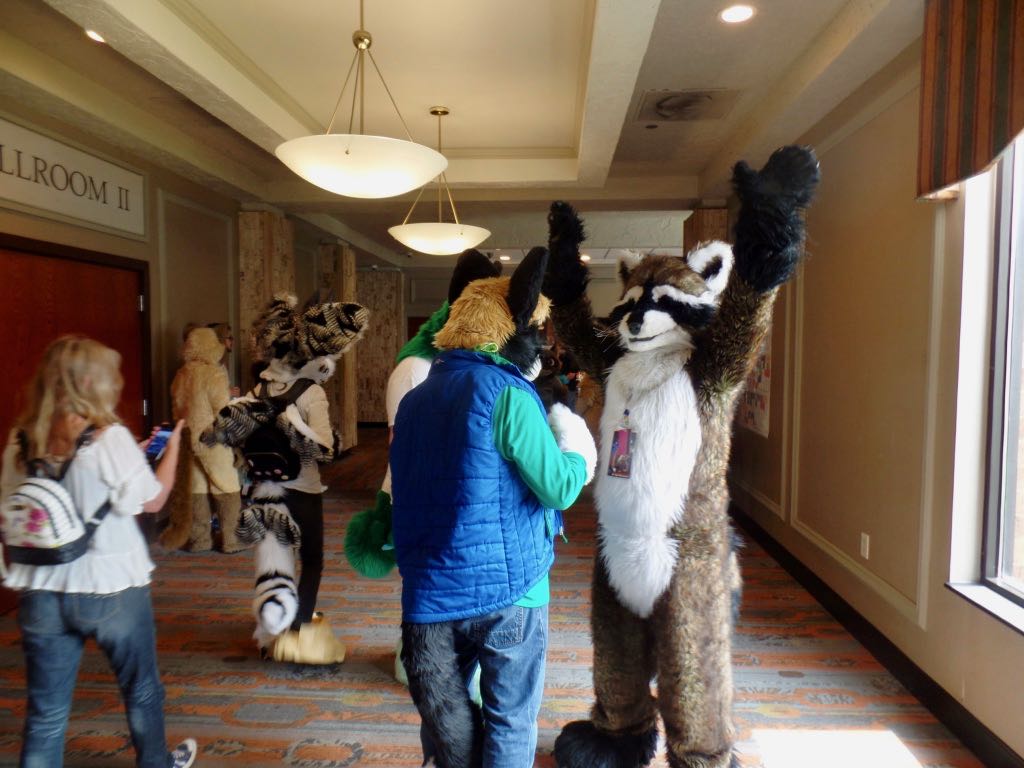 PunkCat, in raccoon guise, probably up to some mischief or other. You know how it is.