And then came the Lansing Pinball League finals, another one run since

bunny_hugger took over the league. I assisted and set things up, as she was coming home from school. Shall need to assist this way next semester too, but after that she'll switch to a Monday-Wednesday schedule and have all Tuesday free.

Both of us were in the top, A, Division. Leagues are undervalued in the current International Flipper Pinball Association's rankings. But if you can get a top two finish you'll help yourself considerably. This would be challenging. I was seventh-ranked and so in the first round would face DMC.

bunny_hugger was eight-ranked and would face reigning league champion MWS. But, the tournament is double-elimination --- you have to lose two-games-of-three in two separate rounds to be knocked out --- and you can come back from a single elimination to win. Especially if the power players knock each other out. Unfortunately, the power players are MWS, DMC, RED, and IAS, none of whom would play each other in the early rounds.

The top seed gets the first pick of game in the match, and then the loser of each game picks the next game. So there's a basic strategy if you're playing someone better than you. For your pick, choose a game you feel stronger than them on. And for their picks, hope that you can win one of ``their'' games. DMC is able to do basically anything he wants on Deadpool, Willy Wonka, Batman, Grauniads of the Galaxy, and ... you know? That's enough. Some of these games I'm really good on, like Willy Wonka and Grauniads, but he's better. He creamed me on Deadpool. I figured my best bet to squeeze something out was one of the older games, and chose Simpsons. I'm usually pretty good at this and besides my other pick, Tales of the Arabian Nights, I had too crazy good a game on during practice, and knew I would drive myself crazy trying to match that. Doesn't matter; I had a spectacularly bad Simpsons game and got knocked out.

While waiting for my Second Chance Bracket opponent I drove home because I forgot something. Years ago, league founder WVL got souvenir ribbons for everyone in league who didn't win a trophy. These are nice green ribbons marked Lansing League LOSER. Everyone loves them. He got way more than he needed and recently found the cache of them and turned them over to us. (He lives in Kalamazoo or somewhere now and with work obligations can't play regularly anymore.) I forgot to bring them. I also forgot where, at home, we left them. They had gotten folded somewhere on the line, so

bunny_hugger set them underneath some heavy books to straighten out and after a couple weeks underneath heavy books they became invisible. And now at home I ... couldn't think where they were, and had to head back in failure. Back at league,

bunny_hugger demanded to know why I hadn't picked up the phone at home; as best I can tell, I was back at the bar when she did remember where they were and called. So after the next round I went home to get the Loser ribbons, and passed them out to people as they were knocked out, and everybody loved getting them.

Ah, so, the next round. I was put up against PAT, who I felt pretty confident going up against. He creamed me on one of his gams, Batman. He had a weak game, but I had a thoroughly incompetent one. This took us to one of my games, Willy Wonka, where we both had lousy starts. But for the last ball I was able to use one of the things I'd learned in picking Fear and Trembling objectives --- how to start the playfield multiplier --- and ended up whomping him. Our last game was his pick, Indiana Jones, and one that I'm usually competitive on. I ... had a pitiful, catastrophically bad game, and got knocked out. And, after getting back with the Loser ribbons, licked my wounds by tracking the paperwork of running the tournament.

I was not in the spirits to console

bunny_hugger, who'd also been knocked out in two rounds. And this, heartbreakingly, after she came close to an upset over MWS. Because she and I were the first two eliminated, and she was lower-seeded than me, she got eighth place, as low as possible. She always feels rotten after underperforming, and I'm never really able to help. But after my own performance, with not a single good game (my win was a mediocre finish) I was even worse than usual.

She had a small consolation in the side tournament, which she handily won. This is almost nothing; the prize was a Michael's-grade medal that I had made myself, showing off a snowman (we had gotten five and a half inches of snow the day before) and not much else. And only three people competed for the final prize anyway, as everyone else who would be eligible was playing in finals yet. But it was something, and it's given

bunny_hugger her first first-place finish in an open competition. There'll be more.

In the end, RED finished in third place. And in a suspenseful match of three really competitive games, MWS lost to DMC. So after thirteen seasons the league has only its third-ever champion. (CST won the first ten years straight; MWS the next two.) MWS had already lost one round, so that when DMC the night was over. Which was in part a shame, since it would make such a great comeback if he had won. But that would have forced another best-of-three round between the two strongest players in the league this season and the bar might have closed out from under us.

The next Saturday --- the 16th --- there was another pinball event, one at RLM Amusements in Grand Rapids. We had gotten to one back in June. This would have been, very like league, quite worth it for a first- or second-place finish (first place got just over eight IFPA points). But we didn't think we had the time or energy to go to yet another pinball event so soon, and we stayed home instead.

This Saturday by the way --- that is, the day that just ended as this is scheduled to post --- saw yet another pinball tournament. This one also at the hipster bar where Lansing League meets. Not one we're running, though. MWS, after five-plus years in competitive pinball, decided to try running his own. I'm writing this before the event, when all I know is that he's having the same anxious spiral about what-if-something-goes-wrong that

bunny_hugger has ahead of all her events. As I write this, I don't know how it'll go. But it will be exciting, and I hope to report on it soon.

There are three Fremont tournaments remaining in the calendar year. There is also the Grand Rapids quarterly tournament, well worth it if you can finish top four. The Silver Balls In The City charity tournament, worth something for a top-three finish. MJS's New Year's Eve tournament, which will probably be really good for the top two finishers (based on the format used this year). Possibly some other things, scheduled as people maneuver for position as the 2019 pinball season closes. Then the 1st of January 2020 we all start anew, tied for first place, in the reborn summer of new points-gathering opportunities, secure in how they will never end.

Trivia: Apollo 12's recovery swimmers provided the astronauts with respirators and coveralls, rather than the biological isolation garments used on Apollo 11, after splashdown. Source: Where No Man Has Gone Before: A History of NASA's Apollo Lunar Expeditions, William David Compton.

PPS: Do you want to see 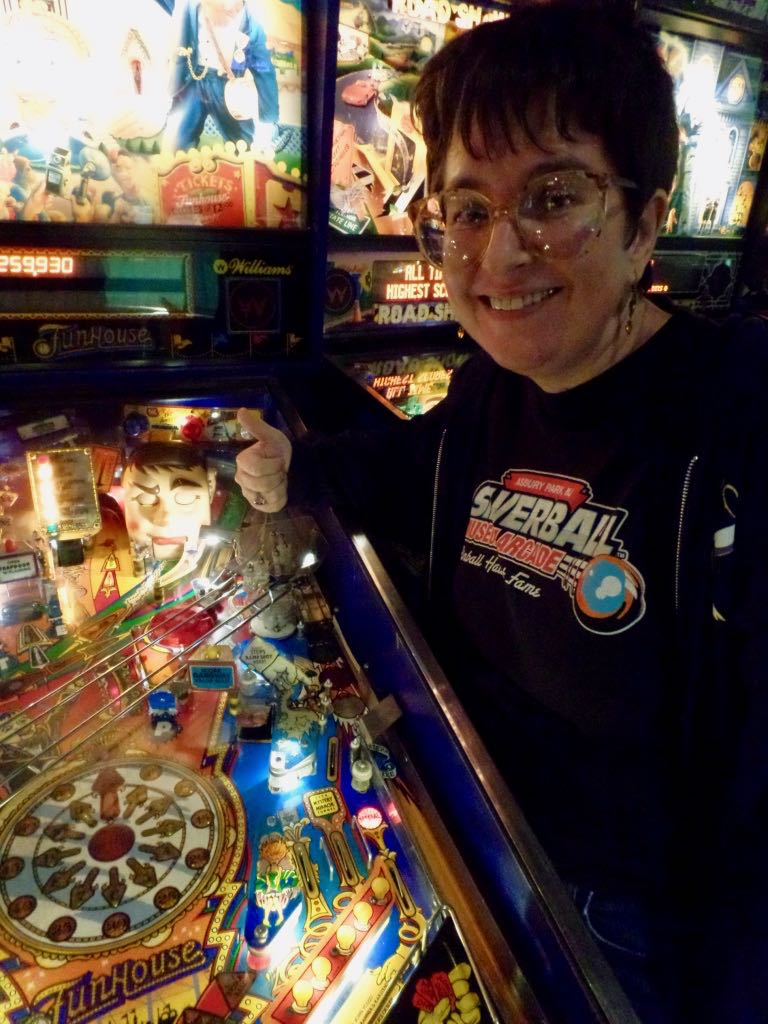 bunny_hugger the favor of taking the glass off his, her, and my favorite game of FunHouse, so that she could get a little face time with Rudy. I realize now somehow this was not the Stephen Colbert ``I'm With ___'' pose. 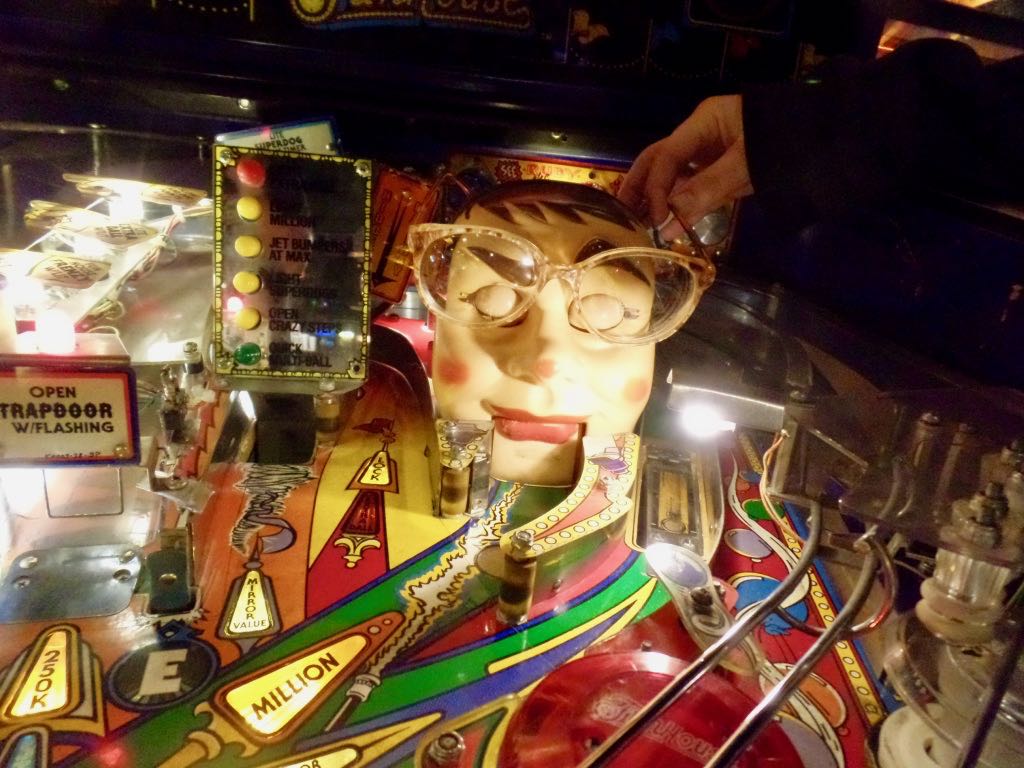 Basically every FunHouse you ever see will have a malfunctioning Rudy, because the head has about 85 million component parts and something is always going to be broken. So his eyes always need a lot of help. And so

bunny_hugger loaned him her glasses. 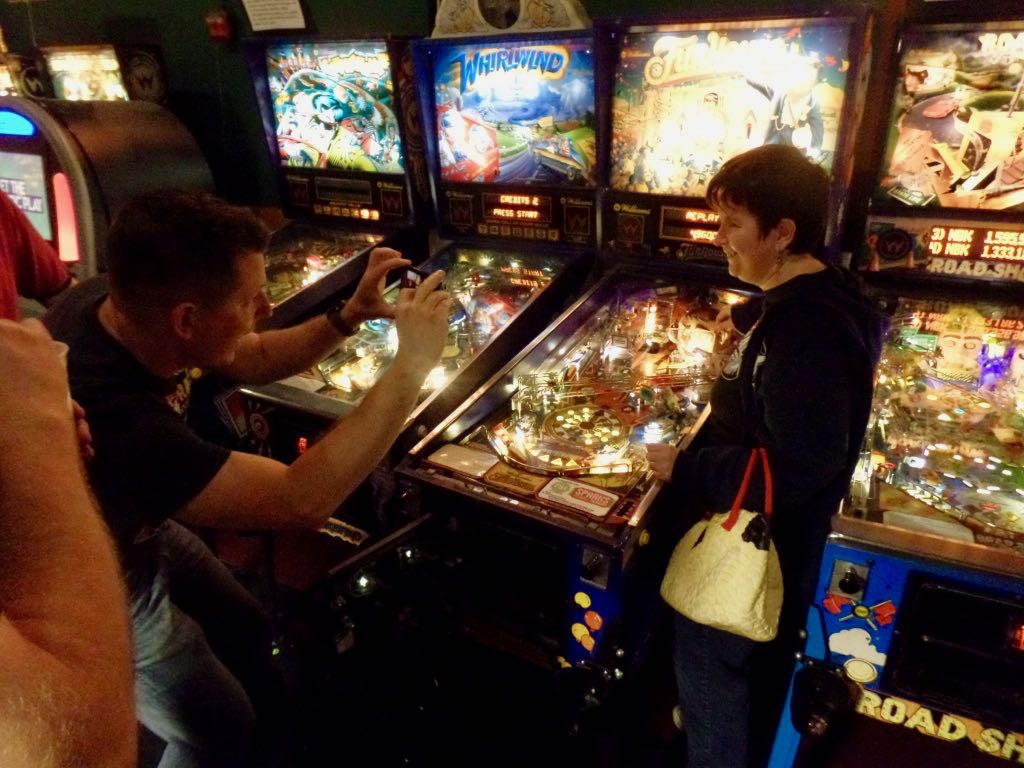 bunny_hugger putting her eyeglasses on Rudy was a great subject and who wouldn't want a snap of that?