bunny_hugger to climb out of 26th place into the top 24 in the state. Two of them were in Fremont that rainy Sunday. Either of them --- monthly or league --- would have enough International Flipper Pinball Association rating points if she finished top two, like she did in October. If she finished top-six in both, like she did in October, she'd earn enough. There were 18 people there for the League and 16 for Monthly. But some of the worst competition wouldn't be there. MWS had accidentally committed himself to another tournament across the state; we love him, but he could win any of these. ADM, bizarrely, skipped out on this chance to get into the top 24 himself. MKS and PS didn't attend. Nor did JB, nor RED. I learned later that MKS's father had died. And compounding the unfairness of that, PS's father died the next week. Rotten stuff.

Some tough people were there. RLM, particularly, and MSS. And JD, the other person on the bubble for making it into the state championship. Still. In the league tournament --- the slightly more valuable of the two --- we'd start with two rounds of people playing three-player groups. This is great since each round, as they run things, has the top two players in a group move on to the next round. Three-player groups are much easier for everyone. Both of us carry on through the first two rounds without serious issue, and are ready for the final eight.

A pause. To get the two tournaments done in a day, AJH and PH stagger them. They play enough rounds to get one tournament down to the final eight, and then go to the other tournament, the Monthly. Here, I carry on without issue, at least once my first pick of game, Dirty Harry, starts to malfunction and has to be replaced. The replacement, X-Men, is one of my ace-in-the-hole games, something I have an inexplicable ability to play well in tournaments. I can't say I crush my opponents' spirits, but I do get through the round easily.

bunny_hugger gets knocked out of the Monthly, first round.

Her only hope, to use Fremont to get her into the state championship, is to go to the final four in League. Preferably, top two. At least top three. And after this infuriating loss it's going to be hard for her morale to recover and to play well again. Me, I have another easy round and get to the final eight in the Monthly. With both tournaments down to eight players, we switch back to the League.

Here. Oh, of course this was coming. In this round it's four-player groups; two people will get knocked out of each group. And

bunny_hugger and I are in the same group. She is quite able to beat me regularly. My statistics suggest she beats me about two-fifths of the time, at least recently. Still, she needs to beat two of me and JD and this guy JP that we only kind of know. People you only kind of know are dangerous: the instinct is to suppose they can't be that good or you'd have heard of them, and all it could be is they only started playing around here in October, like JP did.

Well, it doesn't much matter how good JP is. I put up a spectacularly awful first game. And follow it up with a god-awful second game. And a rotten third game. And a miserable fourth game. In the fifth and last game of the round --- my choice of game, and a point where it could not possibly help me --- I pick Barracora, a game

bunny_hugger has been having good games on all day. My reasoning is that I can't help myself but I can at least pick a game she likes. It treats her well, giving her another win and securing her advance to the final four. And I get a third place, so I don't have a perfect-failure round after all, which makes a nice moral victory.

bunny_hugger is in the final four in the League tournament, the more valuable of the two. She could put herself in the state championship; all she has to do is not finish last. Preferably, if she could finish second ... or even, you know, win. It would be hard, against AJH and MSS and JP, but ... she's beaten AJH before. MSS is really good, but also prone to tilting away savable games. JP is a mystery but maybe he's just an OK player having a good day. She could save this.

I'll leave you on that hook while sharing the results of the Monthly. In this

bunny_hugger is knocked out, angrily eating cheese spread and hummus to console herself. But I'm in the final eight, and recover from my apocalyptically bad League round to advance to that final four while knocking out AJH. In the final four I pull out my other ace-in-the-hole game, Johnny Mnemonic, trusting that my usual three-billion-point finish will demoralize JP and maybe JK, and maybe shake MSS enough to give me room. I tilt the first ball, probably unnecessarily, and while I recover partially I still end up getting a last-place finish on my ace game. I get better, though, over the round and collect second-place finishes. I can't win outright, but JP is having a terrible round and I could get second place overall. The last game of the tournament is my pick, and trying to think of one I could beat MSS or JK on? I go for Embryon, and am wrong. There's brief moment it looks like the flipper is sticking and the game might have to be thrown out, and I think what other games might save me, but, no. The flipper's repaired and I go on to a defeat. I finish in third place, not at all bad. Not enough to launch me above 13th place, where I've been squatting for months, but I didn't think it likely I would. This is the least disappointing disappointing finish I could have.

So back (in my narrative, not in the flow of time) to

bunny_hugger. She's in the final four in League. Anything but a last-place finish probably gets her into the state championship. A last-place might if everything broke exactly right. A second- or first-place finish gets her for sure in. The first game is Blue Chip. She used to hate this electromechanical. She's learned how to play it, though. She's learned to love it, since she can always play it competitively, and often play it to win. She's ... forgotten this is a tilt-ends-game game. She tilts. On ball one. She gets a last place on this game, and a stupid last place at that. I point out to her that everyone has tilted a tilt-ends-game game. I did it two or three months ago. AJH did it in October. (``On ball one?'' ``YES!'') MWS famously did it on 4 Square, another tilt-ends-game one, early in the year.

It's no consolation. With sunk spirits she plays the next game awful, too, and takes another last. She starts to recover, though. She even has a good game of Blackout, another early solid state that she used to hate but that, with some experience and coaching, she's come to like. It's only good for second place, though. I forget which the last game was; I think Embryon again. It's not enough. She curses herself for that one reckless moment on Blue Chip. PH looks at me, wincing, and holding his fingers just an inch apart.

It's impossible to know the numbers precisely. The exact value of a pinball tournament depends on the number of people playing, and all of their ranks at the time the tournament began, and that depends in part on past tournaments including those they've played but that haven't been logged yet (such as, for us, Silver Balls, held the day before). But we can use past tournaments as estimates for that. And her competitors for the 24th spot in the tournament were also playing. There, there's some good news. DAD and TY and AG, all playing at the event MWS is at, have mediocre finishes that won't help them any.

But as best we can figure, she's missed the state championship by probably under one point, and we drive home with the most terrible disappointment of being this close to a last-minute triumphant victory and missing it altogether.

There is one tournament remaining in the year.

Trivia: New Rochelle, New York, was settled shortly after the Edict of Nantes's revocation in 1685, with groups of French protestants escaping the new political climate. Source: The Old Post Road: The Story of the Boston Post Road, Stewart H Holbrook.

PS: Another of the great features of Lakeside Park. 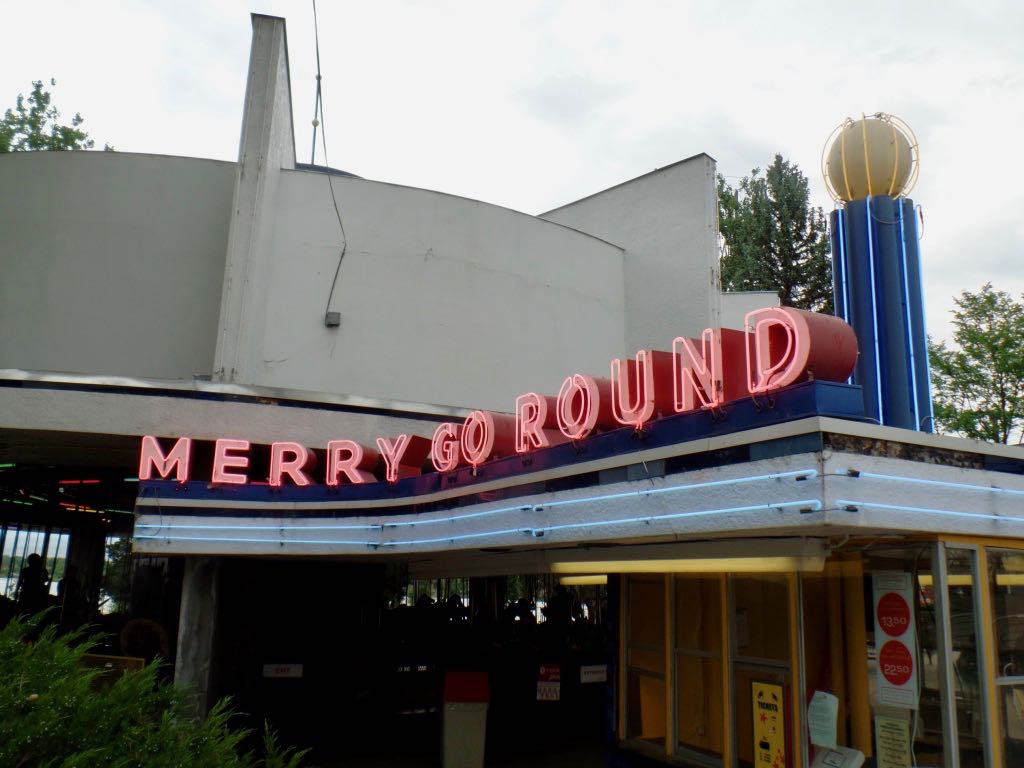 Lakeside Park's Merry-Go-Round building is proud of its 1930s Art Deco styling. Most antique carousels have wooden, or wooden-looking, structures. Some have nice glass jewel-cases. This is a neon and concrete structure that's just not like anything else I've seen. 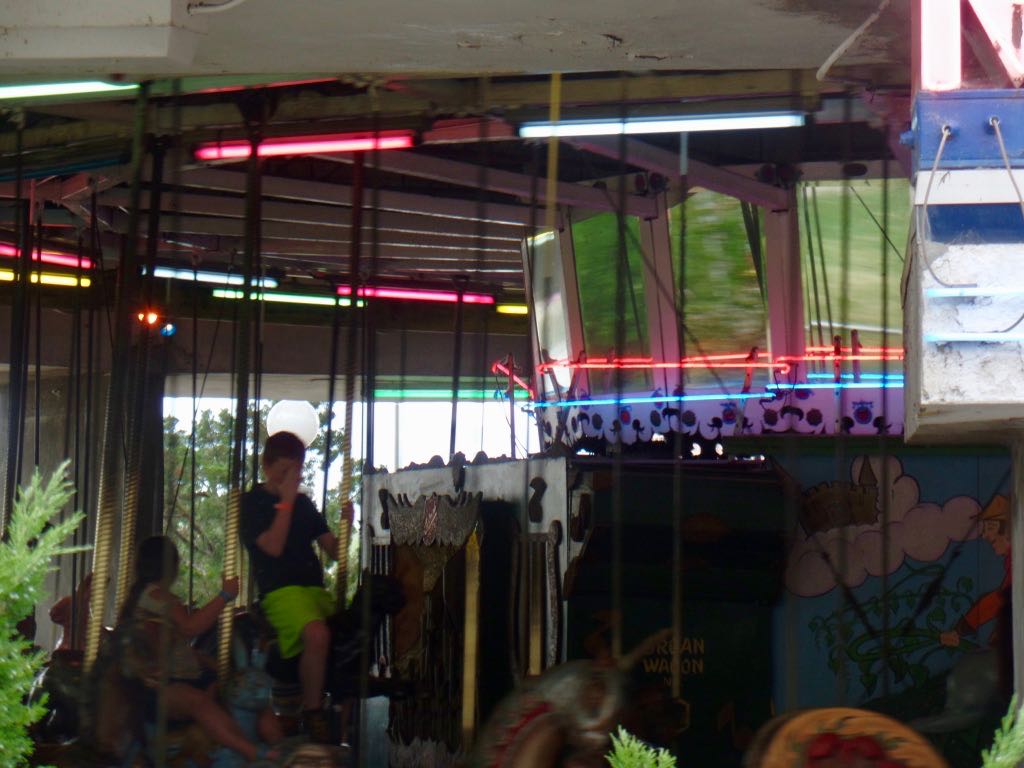 A glimpse into the carousel, with great neon ribbons above and mirrors as rounding boards. This scene may look confusing. We'll get better looks at it, though. 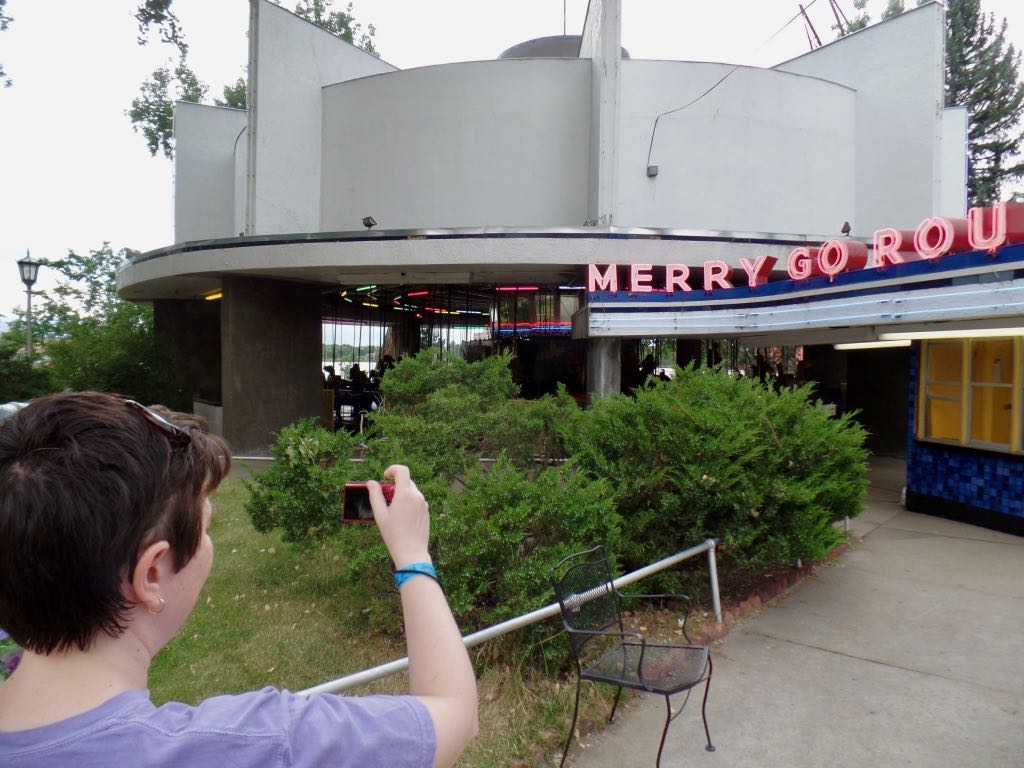