We did not, despite temptation, sleep in all day Friday. Even for how tired we were the something-like-ten hours we got was enough to get us functional. We came out and had leftovers for lunch and actually got coffee and tea using the Keurig and did not have any fiascos about it. I was even able to work out the machine being reluctant to heat water because it needed water to heat, and got the tank to fill without trouble.

My mother had suggested we go to the cypress garden nearby. She liked the setting though not so much as to go again. So after just some miscommunication among us all about when we would set out,

bunny_hugger and my father and I set out. The gardens are not far from their apartment, as the crow flies, but everything in their part of South Carolina is connected by a road network that takes you farther away from anything you would like to visit. I believe the gardens were 185 feet away from the edge of the apartment, but we had to take highways that led us briefly into Georgia, North Carolina, and the Delmarva peninsula.

The gardens have a statue of an alligator out front, possibly because everything in South Carolina has an alligator attached. We got there a little bit before a swamp tour started, so while my father chatted up one of the guys hanging around the dock --- someone from Vermont, and who had gone to RPI and been part of their student radio station way back in the day ---

bunny_hugger and I walked a bit along one trail, and examined the wildlife-to-expect.

The guided boat tour was in a rowboat, ten of us plus a guide who worked there when not a student in New Orleans. And there was wildlife nearby: an alligator was just hanging out near one small island, and the guide pointed it out for us all to take many blurry pictures without disturbing it. A family paddling their own boat --- you can take one out yourself --- nearly cut us off, going into the cypress trees, and probably splashed around enough to scare off any other wildlife.

The guide explained that the weird posts poking up out of the water and ground around the cypresses were part of the cypress tree root systems: they reach out and up from the ground not so much for nutrients but for stability. We'd seen this along the path and wondered what they were for. The guide also explained some of the history of the place. That it had started in the early 1700s with a land grant to build a rice plantation, which five hundred ``helpers'' did over the course of five years. Anyway, the Civil War comes and rice plantationing isn't so profitable so a Yankee industrialist bought the place. He thought it was a good private hunting grounds, and planted cypress trees so it'd be an even better wildlife refuge. Then opened it to the public for pay. Eventually, that wasn't paying out, so the family donated it to Charleston, even though it's in another county. Eventually Charleston transferred it to the county it's actually in. The place was damaged in a hurricane a couple years ago --- the water actually drained out; the swamp is a human creation --- but was finally repaired and reopened a couple months ago. Helpers.

For all its artificiality the place looks wild, which tells you something about how improving the land can work. It also looks uncannily like many illustrations of Walt Kelly's Pogo; I kept being distracted by the thought of what gorgeous brush lines make up these many trees. The swamp is, on average, surprisingly shallow, something like four or five feet much of the place. But deeper in some places. Shallower in others, such as one spot where a film crew built a gravel platform so the actors could ford a bank. This was for the movie The Patriot. The guide also pointed out a grove where they filmed an important scene for The Notebook. Their web site mentions other films or TV shows made there too, including Swamp Thing, so it isn't just stuff named ``The Noun'' that they do. He also pointed out one bridge that is so very low to the water line that it's not safe to pass under without ducking down. The kids in the boat, who actually didn't need to duck, almost vanished beneath the bench seats. The guide was a funny fellow, as is probably wise for this kind of thing; he also said the people sitting up front had the job of brushing any low-hanging tree branches the boat passed near so as to shake any snakes onto them.

Also there's a gazebo, often used for weddings, and a dock that has a little triangle niche cut out of it so that a bride can glide over the water up to the ceremony. This sounds lovely except I don't know where the bride comes from. Like, does she sit down in the boat, which takes on some water, with her whole gown like that? Does she stand up coming from wherever she does, which seems inadvisable in a rowboat? Does she have to get past the dangerously low bridge? These are all questions I feel I cannot answer.

Trivia: The original Polo Grounds ball park, near the northeast corner of Central Park at 110th Street and Fifth Avenue, was closed allegedly for the need to put in a traffic circle (which does exist), although the unofficial story is that city officials were annoyed the New York National League team did not provide enough free tickets and other gratuities and kicked the team out in retaliation. Source: Crazy '08: How a Cast of Cranks, Rogues, Boneheads, and Magnates Created the Greatest Year in Baseball History, Cait Murphy.

PS: And here's even more of the carousel. 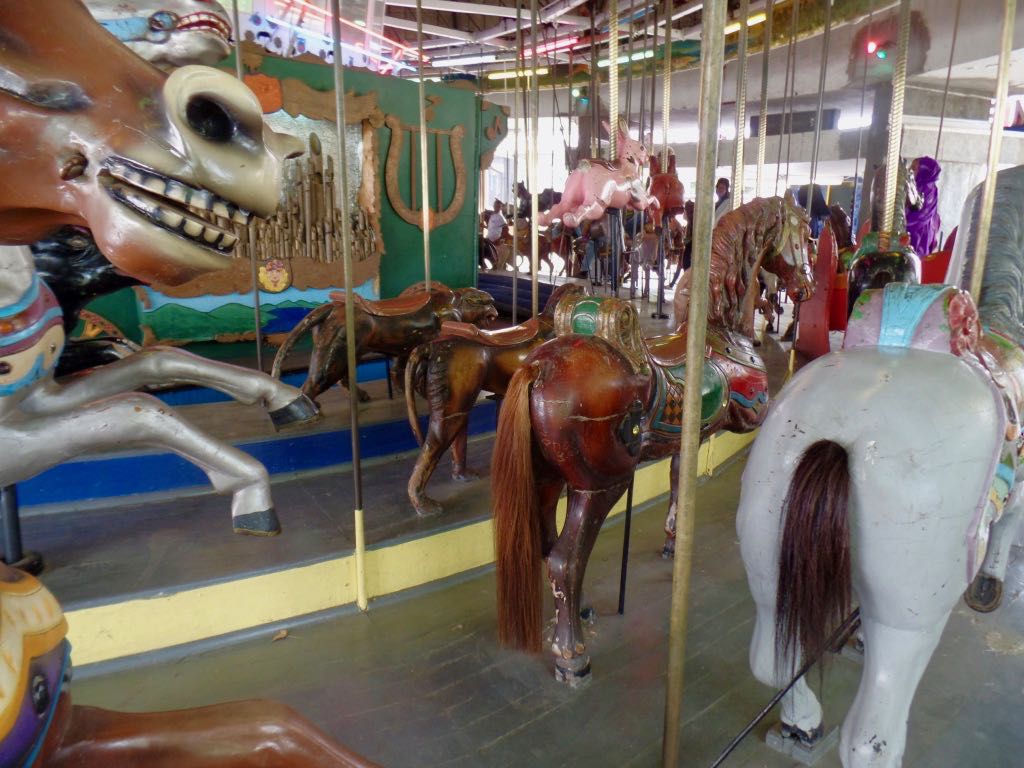 Despite the hard-used condition of Lakeside Amusement Park many of the horses still have real-hair tails, either from their origin or from replacement. Also you get a bit of a view of the band organ behind the not-quite-clenched teeth of an outer row horse. 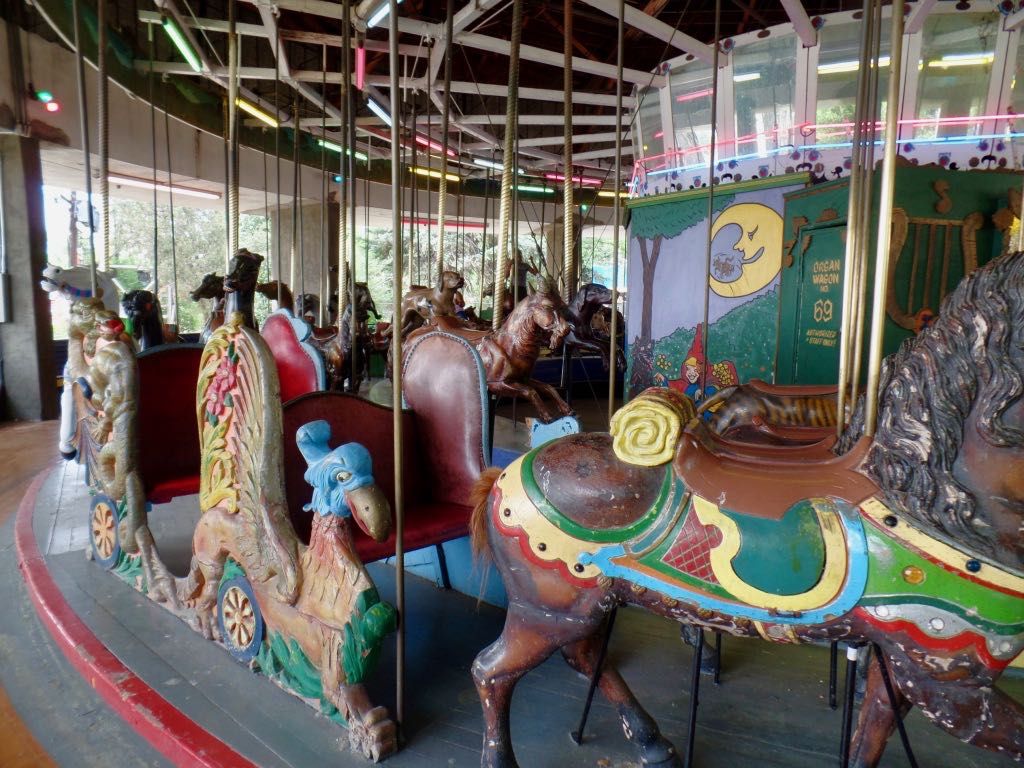 A look at the other, gryphon-themed chariot, and a look at the other side of the Organ Wagon plus some fairy tale stuff on the inside: a cow jumps over the moon and Red Riding Hood meets a wolf. 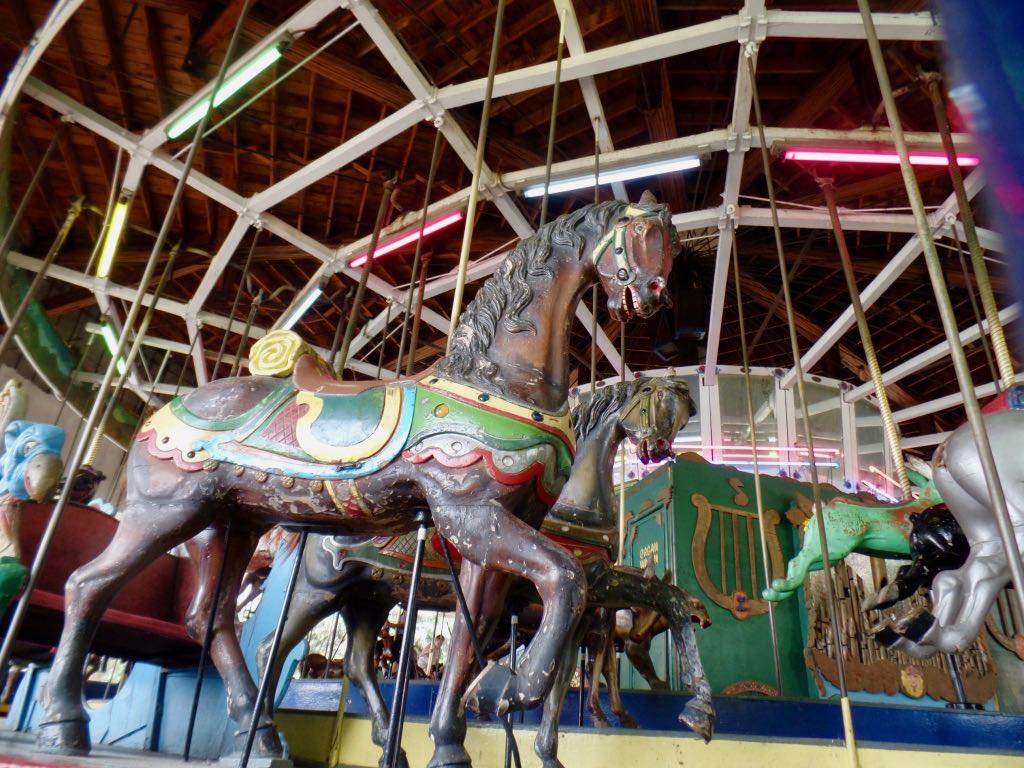 Looking up at one of the more ornate horses and showing off the neon tubes that illuminate the carousel. The great lines of light fit very well with the Art Deco styling of the carousel.