It wasn't until my father talked about sights in Savannah that he never got to, because my mother doesn't feel like seeing the railroad museum or such, that I understood he might have wanted to make that trip anyway. He did, though, suggest we might go to the H L Hunley museum, again something right nearby. I was interested, naturally.

bunny_hugger mentioned it to her mother, who basically leapt down to Charleston to demand that we go. Well, that convinced me.

So our Sunday plans would be an expedition to this museum, another one that's maybe 285 feet away from my parents' apartment as the crow flies, and 185 miles by the highways. Also again, my mother didn't want to go along.

bunny_hugger remembered watching the made-for-tv movie about the Hunley, which she was sure she'd seen on the urging of her starter husband, the Navy fan. I remembered the existence of the movie, but not watching it, and with some investigative work figured out why. When it aired I was in Maryland, attending a three-week teaching session NASA/Greenbelt ran about parallel processing. By the time I got back the movie was somehow not in the endless repeat cycles anymore.

The Hunley museum is a small museum, and is clear about its academic work: it only takes tours on the weekends. Clemson researchers work on it the rest of the time. Right out front is a replica of the Pioneer, Hunley's first attempt at building a submarine and scuttled when the United States recaptured New Orleans. The small museum also has one of the props from the tv movie, set out where you can climb in and get a photograph of yourself bent way over to fit your hands or feet on the propeller crank. The prop is about ten percent larger than the real thing, which I learned later and made my back retroactively hurt more.

We got there in time for the guided tour, which took us right to the conservation tank where the iron submarine is still being stabilized, cleaned out, and investigated. It'll likely never be brought out of fluid. Right now, we can just look down into the pool, shrinking the apparent size of the thing. The docent said he hoped someday it'd be displayed in a tank transparent all around.

The docent talked some about the building and mission and sinking of the Hunley, as well as its recovery. And then went and confused me, at least, with just how it did sink the USS Housatonic. The submarine used a spar torpedo, basically a mine held on a long rod out in front, and the docent got us confused about what precisely was known about the way this worked. My dad revealed that he had been on the tour before and had heard different things every other time about how the submarine and its spark worked. Not particularly confusing us is that there is mystery about what exactly sank the Hunley. The obvious thought is that the blast which sank the Housatonic also damaged the submarine, but apparently the artifact doesn't show signs of that, and they had a poster showing numerical simulations suggesting it shouldn't have been that hard on the submarine at least. Being sunk by Union forces deliberately seems ruled out by the lack of damage; possibly it was sunk by the wake of a Union ship. (This is where I would put my money, although in point of fact, everyone on the tour was given a little plastic coin and encouraged to drop it into one of four buckets for the leading theories. I kept mine as souvenir, as the signs said we could do, too.) The submarine was also way out of the path to safety, which is another mystery.

Anyway we explored the museum a while, particularly paying attention to descriptions about the challenge of how to recover artifacts from it, which filled with silt over the course of 140 years and that needed, like, years of work to think about whether and how to set it upright again. Or how the human remains were identified. (One of the crew is known only by a single name, a reminder of what record-keeping was just like back then.)

While we looked around the gift shop

bunny_hugger and I got very anxious, as there was a guy who'd cornered the cashier and was explaining the museum to her, at length. I reached a point I was looking desperately for something I could buy so as to just break up that scene, but I wasn't sure I wanted one of the books --- or the DVD of the movie --- enough for this.

bunny_hugger did get some souvenirs, although not before the guy had finally used up all the words and left.

Meanwhile my father got a little bit anxious as he'd hoped to bring us to Magnolia Cemetery, nearby. The Hunley sank three times, killing some or all of its crew each time. Those killed in the machine have been buried together there, and this was particularly interesting as family lore at least has it that one of those dead (on the first sinking) was part of my family. This is of course interesting and we couldn't help thinking: there has got to be a letterbox here. Probably several, as quite a slice of South Carolina wealth is buried in the cemetery. We only had a short while, though; the cemetery closed at 5 pm and my father was not willing to see just how much of a grace period they gave people lingering. There were people still driving in ten minutes before the place closed, though.

This was another day of doing small things, low-key things. We came back to the apartment and had dinner, salad with basked squashes. It's another meal that's really good and really easy to make, considering; we should try it sometime ourselves.

After that and more minced meat pie desserts we finally exchanged Christmas presents. I gave books, since that's the sort of thing I think of first and besides they're very good things to bring in carry-on luggage. (That said, airpot security theater did insist on swabbing the wrapped packages when I flew out, part of their deep suspicion of people flying with books.) I also gave my mother a couple of Michigan-themed coasters, heavy marble things, again, nice flat things. I had liked them when I picked them out, and liked them more as we hung out at their apartment since they seemed to need a couple more coasters. So that went well.

bunny_hugger gave my father a set of tools he'd put on his wish list, easy enough. And she got a neat little portable jewelry case, neatly filling a gap we hadn't thought about her having.

And then, already, my mother was ready to get to bed.

bunny_hugger and my father and I watched a Columbo episode Murder By The Book, where I think the episode missed the actual clue, phone records, that should have undone the killer's plans. Also, once again, the criminal would have been so much better off if he didn't try to force Columbo down the wrong path. It also has a bit where Columbo goes home with the murder victim's wife to make her an omelette, which is just weird.

bunny_hugger briefly confused this episode with Publish Or Perish, a completely different episode with the same guy playing the murderer. And then MeTV had this show where a couple of Wizard of Oz fans showed off their collections, revealing that allegedly in the 30s there was a thing where you'd get an elephant figurine and have your friends sign it? ... One collector had such an elephant signed by The Movie's cast, which is ... all right, certainly a thing, since we can see it and all that.

This is around when my father went to bed, and we got to preparing for bed and going to sleep early, for us. We had a flight to catch.

PS: I have more stuff to show you from Lakeside Amusement Park. 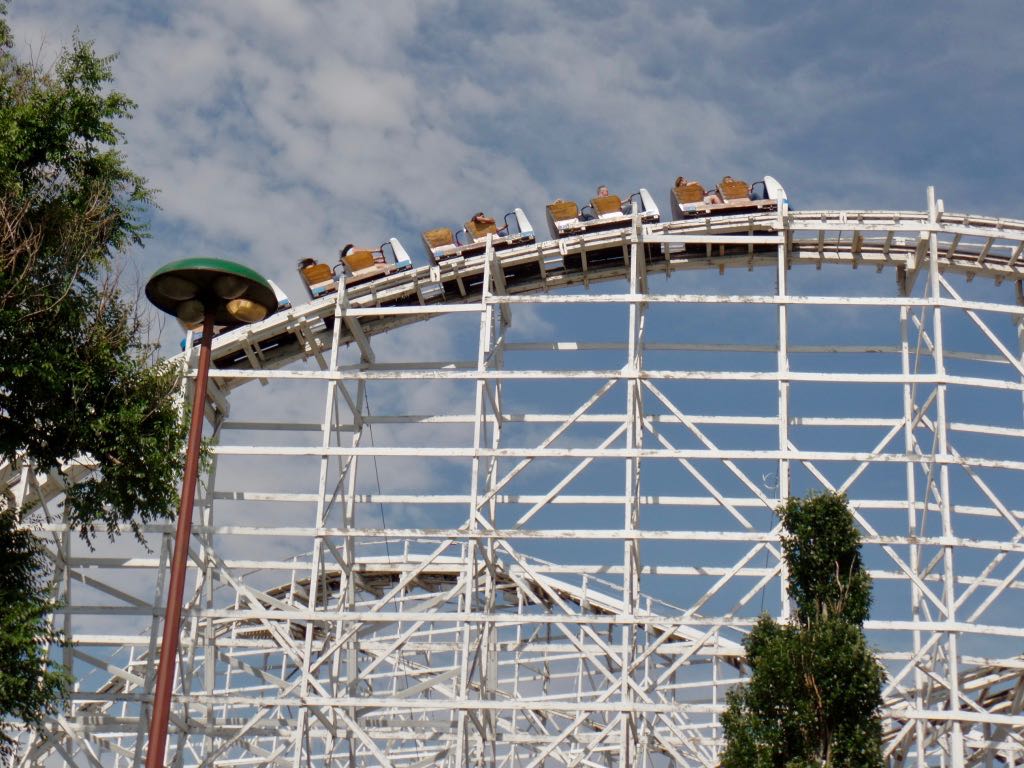 Look up! A train goes along Cyclone. 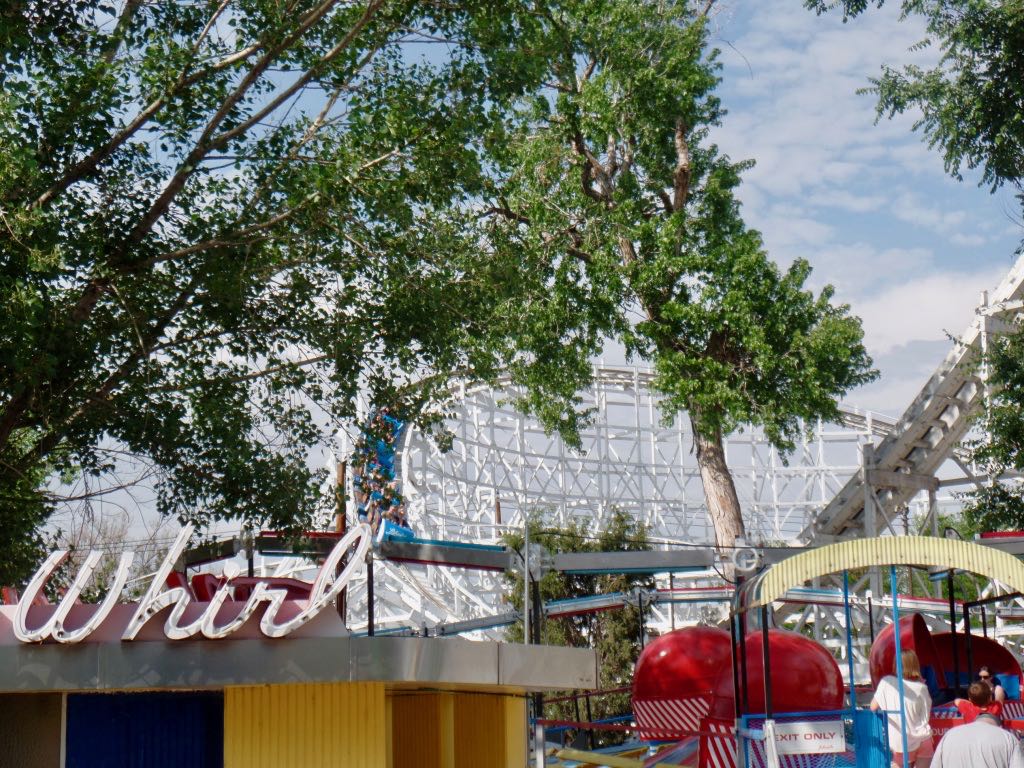 A train on Cyclone making its turnaround, on the hill, behind the Tilt-A-Whirl. 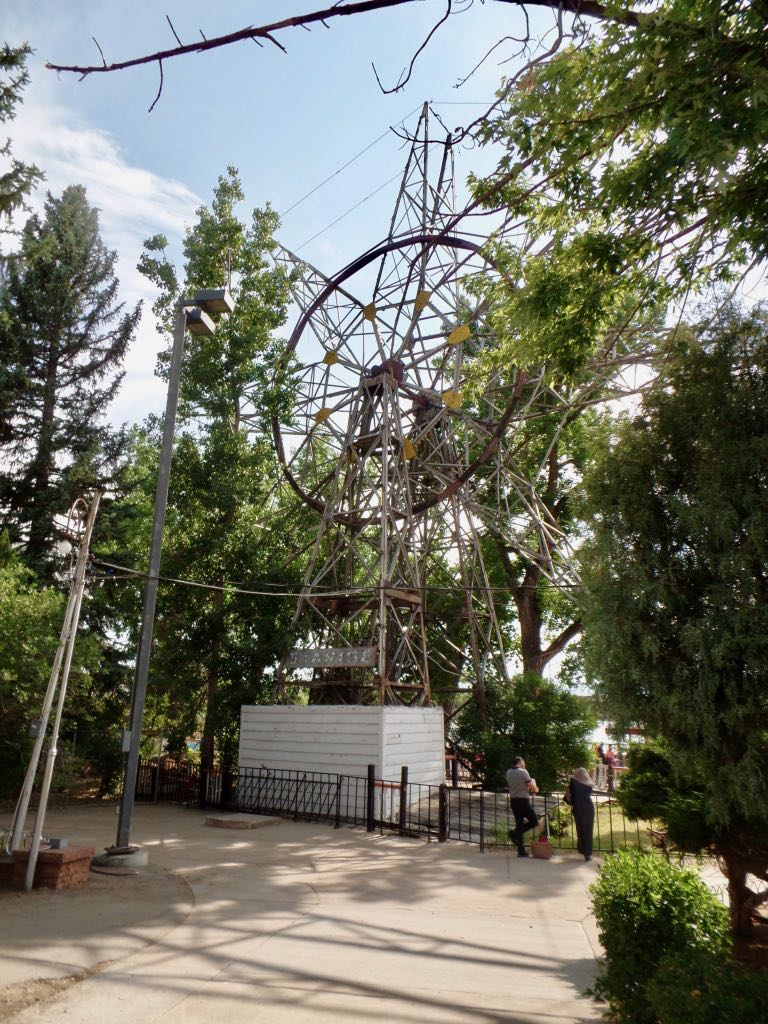 And oh, a look from a different angle at that clearly defunct ride. ... Now, what is your story, there?