Our flights home started in the morning. Not nearly as early as our flights out, just a few days earlier. And we would not have nearly so rough a drive to get there; my parents live something like 900 feet from the airport, as the crow flies, although it's farther by highways. Still, probably about as hard to get to as Lansing Airport is for us, except that their airport actually takes people places they'd want to go. (Seriously, I know it used to be possible to fly Lansing to Newark, albeit through Chicago.) So we were able to get up at an early but not unthinkable hour, have breakfast, and say our goodbyes to the cat, who was kind enough not to give

bunny_hugger too much dander to deal with.

Nothing major of interest happened at the Charleston airport. The disappointing thing is we were seated across the aisle from one another, as the airlines have gone back to not seating us together if it can be helped. And then we had several hours to hang out in Charlotte's airport again. This time around we found a Jersey Mike's, so we got vegetarian hoagies for our slightly early lunch. We also found there's an oddball candy stand there, one that's decorated with vintage signs for, like, squirrel-brand roasted nuts and had candy-themed pajamas for sale which were at least a bit tempting. We did not get any of that, though.

The last flight, finally, was also the longer of the two. And it was the most annoying as we were not just across the aisle but separated by several rows. In consolation, it was pretty smooth, right up to the final descent. Also one of the kids near

bunny_hugger was offered a pair of pilot's wings and she kind of wanted one, but not so much as to ask.

bunny_hugger's parents' home and pick up Sunshine and Fezziwig. But we hadn't planned on doing that.

bunny_hugger did ask whether I wanted to come with her the next day, to pick them up, which would be important for her mother planning how much food to make. Reluctantly I had to admit I didn't think I would have the time. She didn't like the thought of going off to her parents' without me, though, not given the day I expected to have. So we proposed a change of plans: she'd go and pick up the animals on Wednesday, instead. We'd spend Tuesday together at home.

These may seem like unmotivated concerns, and changes of plan. I shall give the motivation starting tomorrow.

Trivia: Between February 1942 and June 1943 the German navy's Observation Service was able to read in real-time about four-fifths of Allied naval communications using cipher number three. This cipher was used for communication between London and Washington regarding transatlantic convoys. Source: The Second World War, John Keegan.

PS: Looking around the tallest thing at Lakeside Amusement Park unless there's a drop tower that's taller and that I'm somehow overlooking. 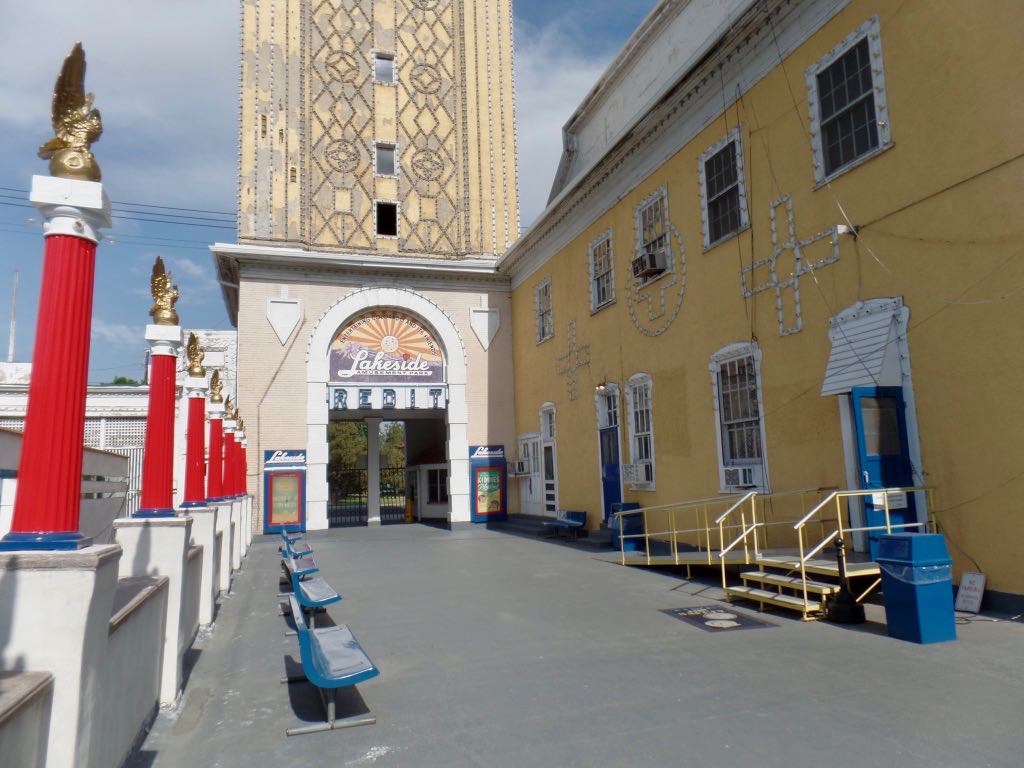 The columns guarding the Tower of Jewels's entrance and the office building beside it; if you want to apply for a job, the door's open, there. 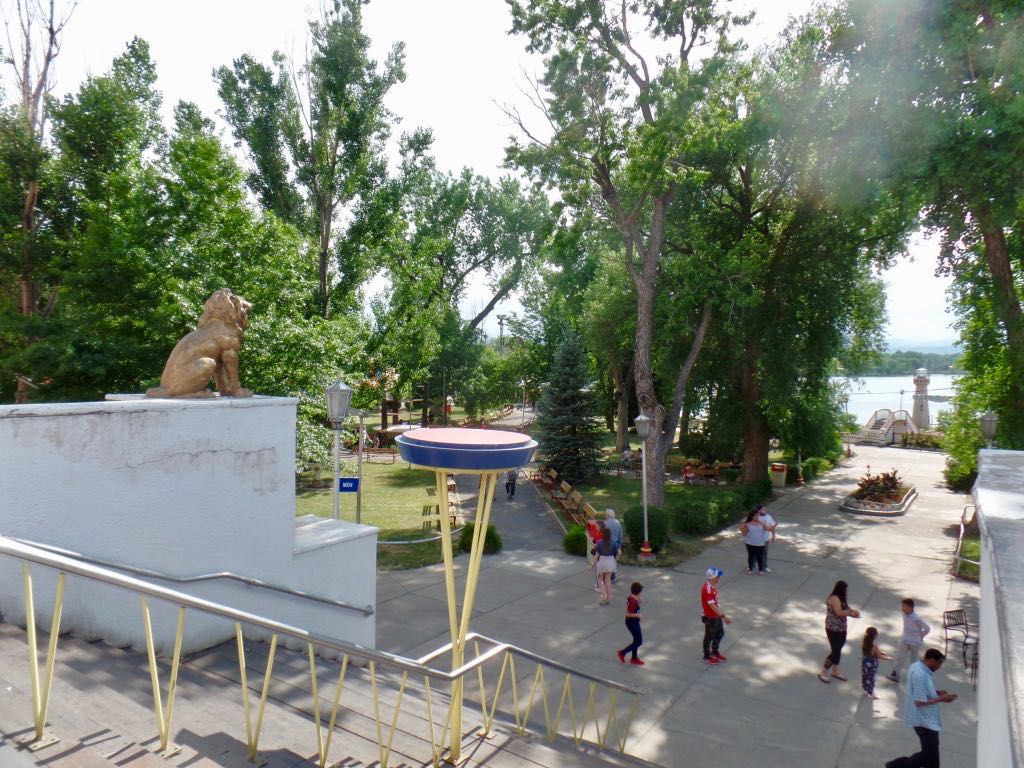 A look back from the Tower's level --- street level --- down to the main level of the park and beyond that Lake Rhoda. 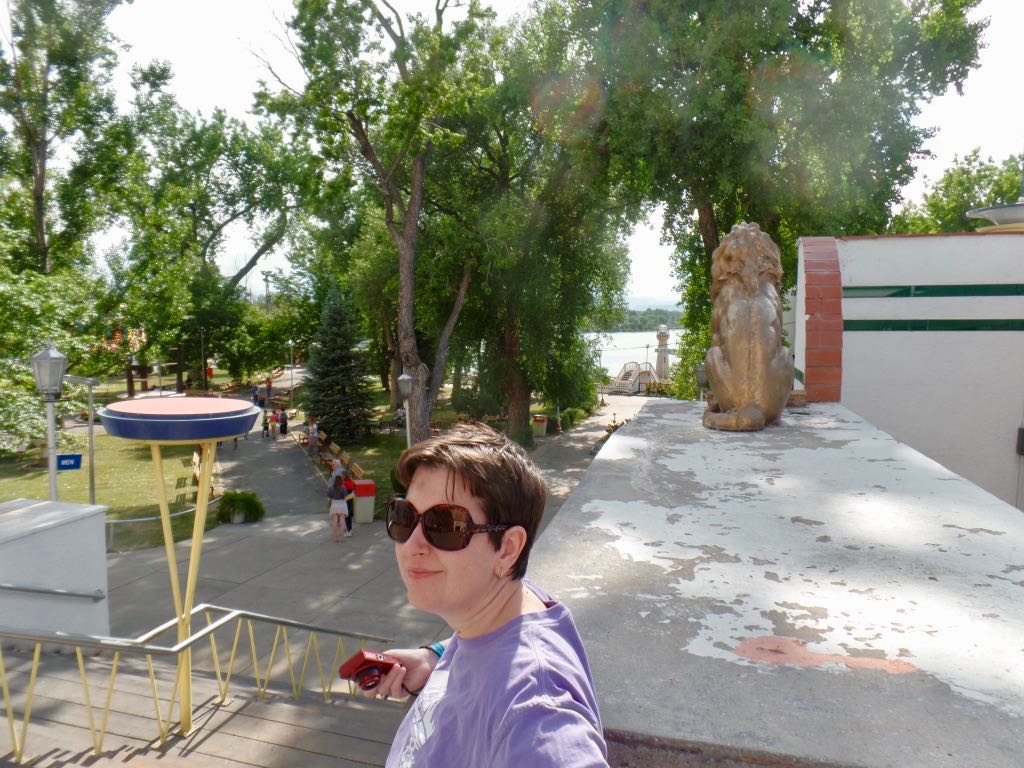 bunny_hugger happy to be seen beside the lions.