Those were my workdays. What about the non-workdays? Evenings involved a surprising lot of trips to this shopping mall that's not actually that close, because I needed to get stuff like tubs of hummus, and somehow the Acme that's on the same street as my hotel is also inaccessible. A highway cuts off the two sides of the road and I never worked out how to get there. Somehow I never had the time I expected to after work, in large part because I wasn't at all ahead, or even on, deadline for my various blogs, this included. Also I learned that they don't have The Price Is Right episodes online anywhere you can see them anymore. I ended up watching a buch of Simpsons episodes on the channel I can only find when I'm at the hotel.

And we went to movies. One thing

bunny_hugger and I used to do was see a movie apart ``together'', going to showing at the same time or as close to the same time as possible. Friday night we went to see Star Wars: The Rise of Skywalker, largely so that we could safely listen to our podcasts, all of which are doing episodes about it. For me, I got to a theater in Trenton that's spent forever going through cycles of being closed and abandoned, then renovated and reopened, then closing and being abandoned. This is one of the patches where they're open so I was glad to catch it in that phase.

The movie was, mm, all right. I didn't like it as much as The Last Jedi, mostly because it kept shying back from the most interesting stuff. Like, there were two points where characters seemed to meet surprising fates and both were walked back and that was disappointing. It's not like it was bad. But, like, the Flophouse podcast episode on the movie pointed out how the story is a point-and-click adventure, get this thing to get that thing to get this other thing to get the next thing, and that's a bit dissatisfying.

The other movie that we saw, on Sunday, was Cats. We would have been inclined to see it anyway. But the air of fiasco surrounding it made us more eager to see it in theaters. (This is also why we're probably going to see Dolittle too.) Here, it's blazing through theaters so fast we could only find one showing that was roughly synchronous for both of us, a Sunday morning show. That's all right.

bunny_hugger has heard the movie is turning into an interactive thing, people calling out stock riffs at the characters, and was worried this would spoil her screening. I hadn't heard about this. While the theater was about one-fifth full, enough to be noticeable, it was a quiet audience at least back where I was sitting. The only audience member I noticed speaking was someone who, at the first singing of ``Memory'', gasped ``Here it is!''. Can't fault someone for that.

So how bad a movie is it? ... I can't say it's that bad. There are many bizarre choices to it. The camera moving around far too much the first half of the film, for example. CGI slathered over people dancing so that you can't trust that you're actually seeing skilled dancing. The cats being presented in inconsistent sizes, and the camera forcing you to notice this, so that some scenes look like optical illusions. Rebel Wilson as Jennyanydots scratching and licking herself in ways that are, yes, true to cat behavior but not, like, good to see. James Corden bringing the action to a halt to make jokes that are appropriate to a comedy sketch based on Cats but that just break the scene of the movie.

I can't say it's good, although good bits keep trying to emerge. But it is a great spectacle, and it's unreservedly itself. Again there was a Flophouse podcast episode about this, and while they were way too put off by the character design, they did come to agree they had a lot of fun watching this. Part of that, yes, from thinking through the implication of Macavity having broken, as the verse reminds us, ``every human law''.

What else did I get up to? A certain amount of poking around old haunts. A bunch of used book stores, where I tried my best not to go too wild but you may notice me having a book about the Bowery, for example. I also went to the Freehold Raceway Mall, to see the carousel there, although I didn't feel like riding it without

bunny_hugger. This was also a chance to poke into the Disney Store, although they didn't have any good Stitch merchandise.

I did stop at Jersey Freeze, an ice cream place we went to all the time when I was a kid and the Freehold Traffic Circle was still there. It's got a restaurant attached and we only rarely ate there, but this was a good spot to go for lunch. And then ... you know, I realized, it's like 65 degrees out. It was warm the whole time of my visit and over the weekend it was alarmingly warm. (Meanwhile back home, Lansing was bunkering down for a major ice storm and not sure that wide swaths of the city might not lose power.) So I got an ice cream, too; they were doing brisk business and boy, remember before we broke the climate and a freakishly warm day in January was something that only happened every five years?

Later on I realized I should have gone to the Popcorn Park Zoo, although I don't know whether the small rescued-animals zoo is even open in winter even if it is 65 degrees out.

I also visited the Silverball Museum. Twice, as it turned out: once for Sunday and once in the long afternoon that I had between checking out of my hotel and the scheduled time for my flight home Thursday. They've got a nice row of all five Jersey Jack pinball games now. They've also been getting better about putting up signs explaining the games. Also they've got anniversary signs, pointing out which games are 25, 30, or in one case 70 years old. Sunday I stayed at the museum until it closed at 9 pm --- they turned off all the games while I was in the bathroom and I'm not sure they knew I was in there --- and, you know? It's fun to do that.

Flying back home, out of Newark, kept threatening to be a fiasco. I had booked a return flight for the early evening and that might be fine at avoiding having to get up early to get to the airport on time. But I was going through security about 5 pm, in an enormous mass with a confusing array of bins, including two conveyor belt's worth of bins that maybe makes the flow of screening go more continuously, but also means you get crazily separated from your belongings if you have more than one bin. Plus, I forgot to take the work-issued tablet out of my duffel bag and they got all snide at me for expecting them to X-ray a duffel bag with a tablet computer inside.

The other thing was my flight. I'd had a flight for 7 pm. There were high winds in the northeast that day, though. This limited the number of flights coming in, which is a real problem as you need a plane coming in to fly a plane back out. I kept messaging

bunny_hugger as our flight was pushed back, and back again, and back some more. And I slowly noticed that, like, I'd been in this little corner of the airport for two hours and not a single flight had arrived or departed from any of the four gates around me. A guy sitting near me, whose stuff I watched while he got food, would not stop commenting on the absurdity of all this and like, yeah, it is absurd. At one point I told

bunny_hugger I was going to stop messaging her with new flight times because every time I did we got bumped back again (and right after doing this, we lost another half-hour). But there's only so much complaining you can do without the complaining becoming the problem.

Also I learned that airport Dunkin Donuts do have their new BeyondMeat Sausage biscuits and those are really good.

But finally they had a plane for us, and we got on, and I got into the wrong seat, interrupting a fair-sized party. I got back into the right seat and felt amazingly stupid about this, though. Taking off and the whole ascent was a bit rough, owing to those winds, and I thought the whole time about how glad I was

bunny_hugger was not on this flight. It was only ever a modest shaking but I know how much she would not have liked any bit of this shaking, especially so soon after takeoff.

So I got back to Michigan after midnight, and drove to the long-term parking exit gate where I learned they had changed the card system between when I left, the Wednesday before, and this Thursday. Had to go to the one gate attendant, who seemed surprised that I had an old-style ticket, somehow. But he was able to make that work and I was able to drive home.

bunny_hugger, and saw Sunshine and Fezziwig for the first time this year, sometime after 2 am.

Trivia: By 1946 all US reserve supplies of grass seed had been exhausted during the war effort. Source: The Lawn: A History of an American Obsession, Scott Jenkins.

PS: Reading the Comics, January 18, 2020: Decimals In Fractions Edition, a handful of mathematically-themed comic strips with a little bit to write about.

PPS: More of what we saw at Lakeside Amusement Park, the junior version. 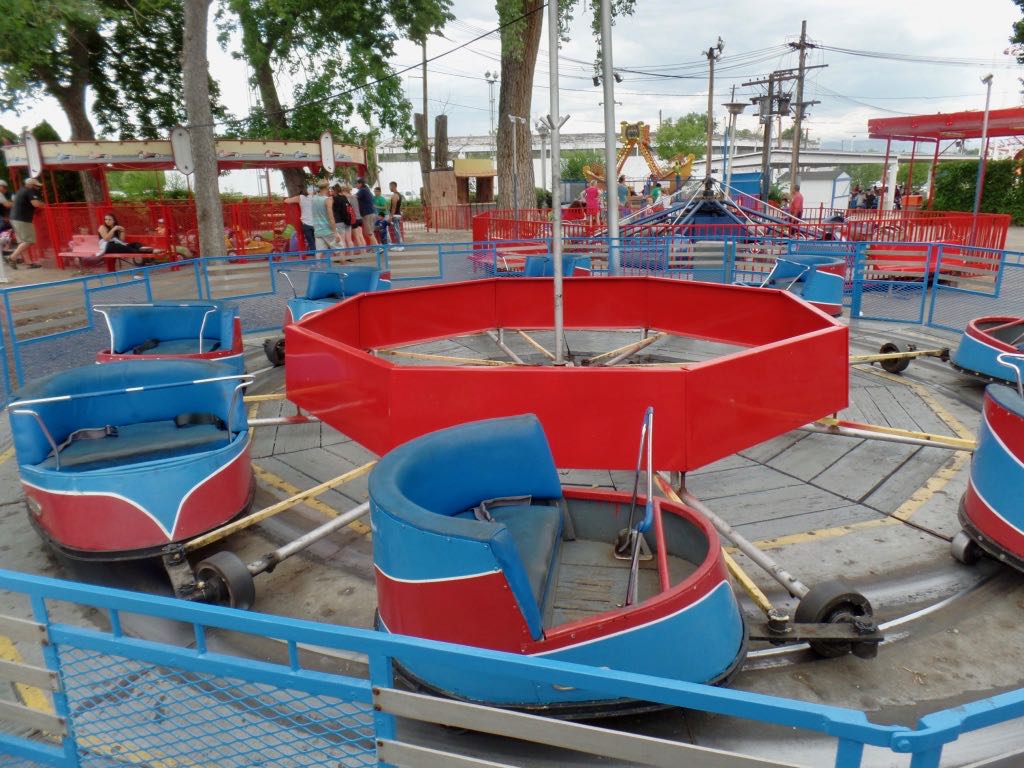 Junior Whip ride in the Lakeside Kiddieland. Some of the other flat rides are visible in the distance. 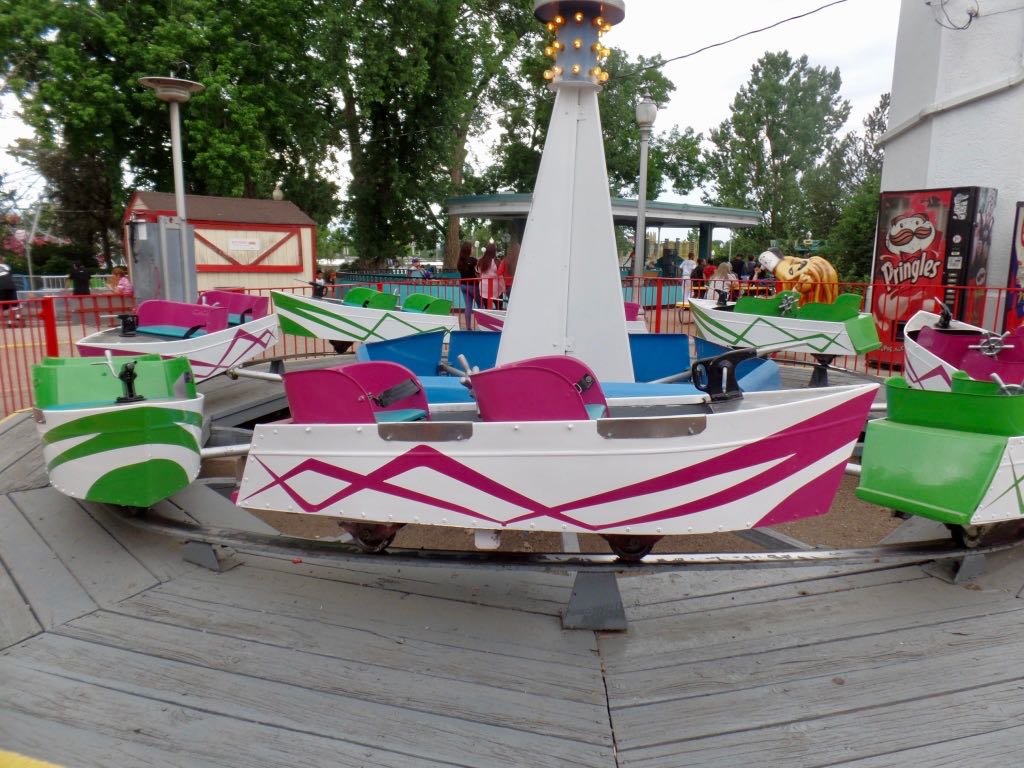 Kids boat ride; notice that the track rises and falls, so there's something evoking the rocking of a boat in this motion. 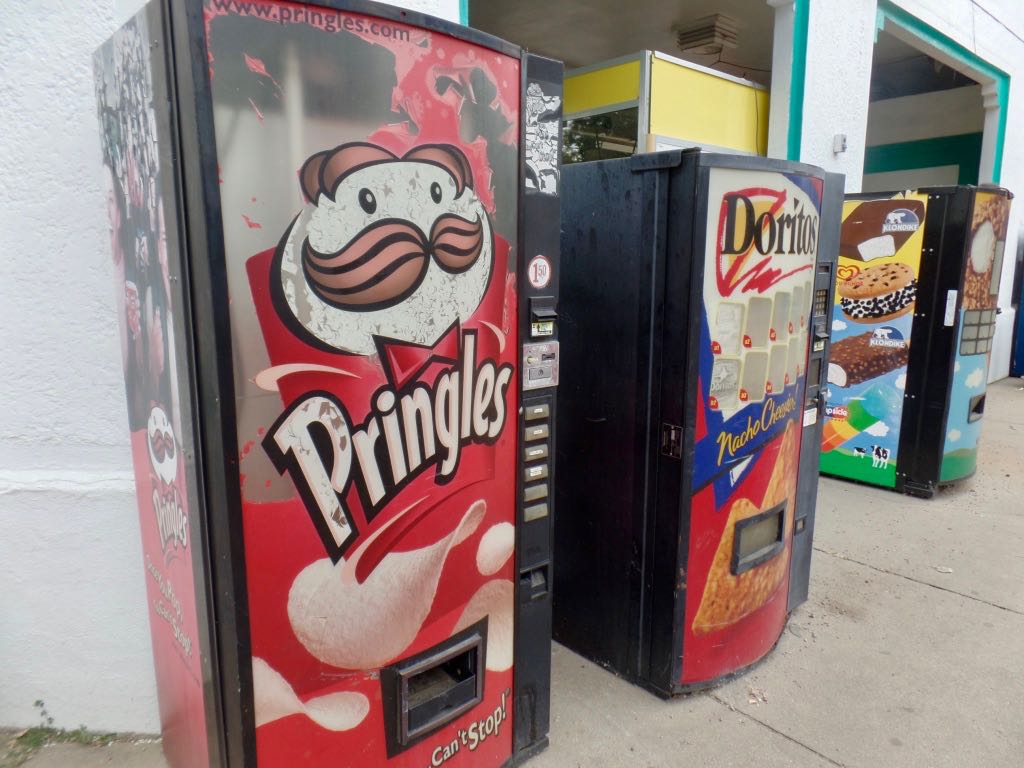