So that was our adventure in the state championship. It's not everyone's, though. Let me share highlights of the way the rest of the tournament played out. Much of this took place concurrently with what I've described the last couple days, but keeping to individuals should make things easier to follow.

MWS, our best-pinball-friend? He started as the third seed, with a first-round bye. And to his shock lost, 4-3, to 14th-seed MDC. MDC's a fine person but

bunny_hugger and I had no idea he'd gotten so good. He's 522nd-ranked the world, as I write this; for comparison, I'm becalmed in the 800s and

bunny_hugger in the 1100s. At some point last year he was 1468th. MWS, sent to play out his ties, goes up against PH. PH had beaten

bunny_hugger only to lose to RLM. MWS beat him, and was slated to play two-time state champion AJG. I'm not sure if AJG, aware of the storm and that there's very little difference in finishing 9th or 12th place, went home. Either way, MWS got the win, and went on to face CST ... who also decided he wasn't interested enough in the difference between 9th and 10th place to risk getting caught in the snow. CST concedes, and MWS finishes in 9th place, and

bunny_hugger grumbles that nobody conceded against her.

MSS, having knocked me out four games to one, goes up against AND, two-time state champion and owner of the games we're playing on. AND, wearing his work gloves (a not-unique habit some have picked up, on the supposition this will help their wrists, or keep their hands from slipping off the buttons) wins this, four games to two. He goes to the semifinals, battling the reigning state champion AJH.

On the other side of things? MDC plays RLM, and wins, four games to three. His opponent? The winner of the match between AJR and GRV. AJR is the son of AND and, as I've said, third-place finisher at Pinburgh 2019 and my pick to win it all. And GRV ... has obviously not make good on his promise to just plunge balls and walk away; I wonder what might have happened had, as originally expected, he faced

GRV versus MDC for one of the final positions. It's a close series; I fully expect that GRV will lose his temper and tilt away a game and the tournament. This never comes to pass, though. MDC makes it hard, taking it to seven games, but GRV wins the last. After saying for a month that he wasn't going to really play, he's in the championship.

The other match is AJH versus AND. Here we have an upset. Not in the finish: it makes sense that either of these players would win and if there were a betting pool, I'd imagine the money to be about evenly divided. The upset is in how long it takes. I would expect the round to go to six, maybe seven, games. Not so. AND sweeps AJH in four games; it's so fast I haven't even had time to detach from the GRV-MDC drama to see what happens. It's only the third four-game sweep in the 22 series played so far today AJH had one of the other two, but in his favor.

In the bronze match, AJH recovers and beats MDC, two games to one. And

bunny_hugger and I think about how, gosh, MDC is a better player than we realized.

GRV's streak comes to its end. He wins only the one game; AND takes four wins, finishing finally on Seawitch, the proto-Beatles game. AND is a three-time winner of the modern International Flipper Pinball Association state championship.

There's paperwork. Since the IFPA began collecting a dollar-per-player-per-event excise, some of the revenue has gone back to the winners of the state championship. All 24 players, in fact: I've got my sealed envelope holding, thanks to my first-round win, more money than I spent in IFPA-event fees for 2019.

bunny_hugger has one with not quite that whole cost covered. (Well, maybe; AJH and PH don't explicitly collect for Fremont tournaments. But it's not as though, were there no IFPA fee, the cost to get into their facilities for the day would be $8 instead.) For most of us this is petty change. For the top two players, though? It's enough to be paid by check, and reported on state and federal taxes. GRV hems and haws about whether it's worth it to fill out a W-9, but PH stands firm on this, and the second-place finisher concedes.

(The amounts depend on the state, as well as final finish. Michigan, with many players and enormously many events, has one of the largest jackpots. States with fewer tournaments and fewer players have smaller payouts. People with the happy problem of being eligible for multiple states can choose to take the larger payout, against presumably tougher competition, or the smaller payout against probably weaker players.)

And there we have it. It's not much past 8 pm, which is surprisingly speedy for so many games among so many high-skilled players, which says something about how tough the games are playing. Nearly everyone's left, though. Some are fleeing the weather; there's ongoing word that a major new round of snow is coming in. Some are just leaving because, having been beaten, they've had enough.

bunny_hugger and I are hard to get out of anywhere, but after all, we do want to see how the things turn out.

Still, this is long enough even for us. I realize, later, that I haven't actually touched any games since my last loss. PH had asked everyone not to play where they might distract anyone still in the tournament, and by the time there were few enough games going on that they might all be in the basement, or all be in the garage, it was the last couple rounds. It was the high drama. We didn't want to miss that just to find out something about Stranger Things we didn't know yet.

We probably could hang around a while yet, but the threat of snow is still there. So we thank JJ and AND for their hospitality and congratulate around again, and head out. The drive starts easily enough; the Interstate isn't too badly off ... until we get halfway to Lansing, and a fresh snow belt, and slushy, covered roads. We're in

bunny_hugger's car, with the better snow tires, but spotting the lanes is hard and we end up behind a car that's going, really, a little slow even for the conditions. Having a line behind

bunny_hugger is not the reassurance that she likes. So much of the last half-hour of the drive is

bunny_hugger demanding to know where the lane is, and me insisting she's in it, until we finally get into town. The interchange between I-69 and US 127, which goes on for quite a while, is not in the least bit fun.

We get home to find Sunshine, and Fezziwig, and the goldfish downstairs are all in good shape, and everthing is well apart from the heaps of snow and snow-over-ice that we'll be dealing with for a week to come.

Trivia: In December 1776 General Washington, to preserve the Continental Army, offered one-month emergency service enlistments, promising those who remained for the four weeks a bonus of $10, more than a month's pay. Source: The First American Army: The Untold Story of George Washington and the Men behind America's First Fight for Freedom, Bruce Chadwick.

Currently Reading: The Crowd and the Cosmos: Adventures in the Zooniverse, Chris Lintott.

PS: Some News on the Travelling Salesman Problem, a spot of mathematics news I can only partially explain.

PPS: Heading out on the railroad at Lakeside Amusement Park! 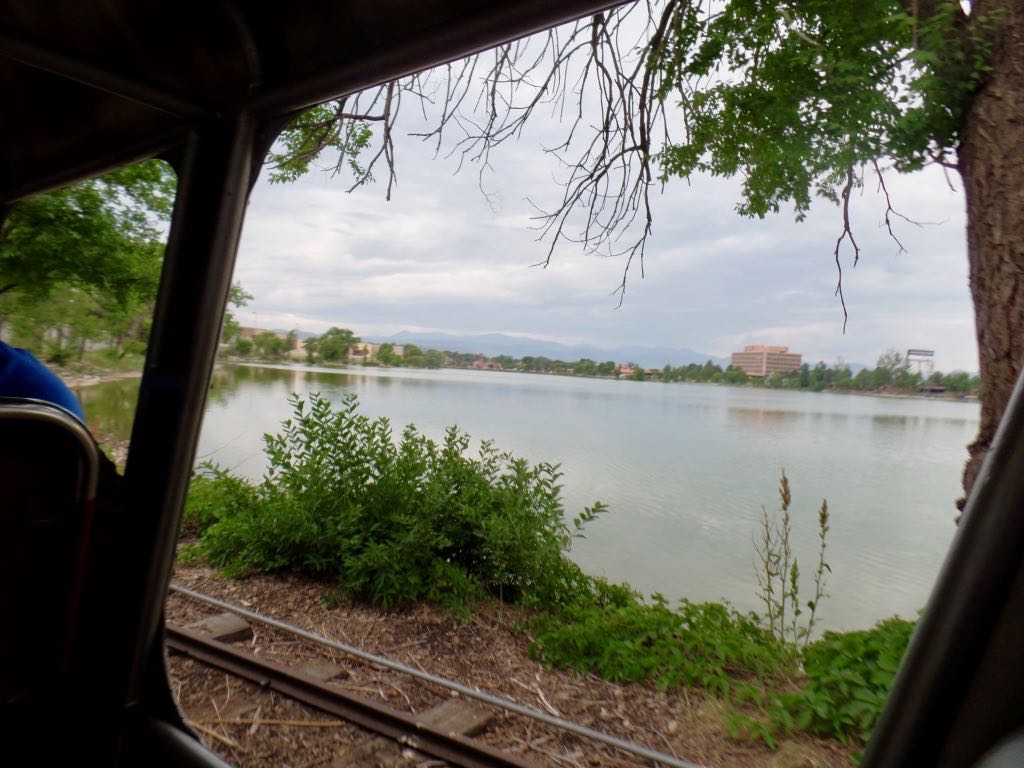 When Lakeside Park opened it was out in the wilderness. Now, Denver's crept up to the edge of the waters which is why there's buildings on the far side there. 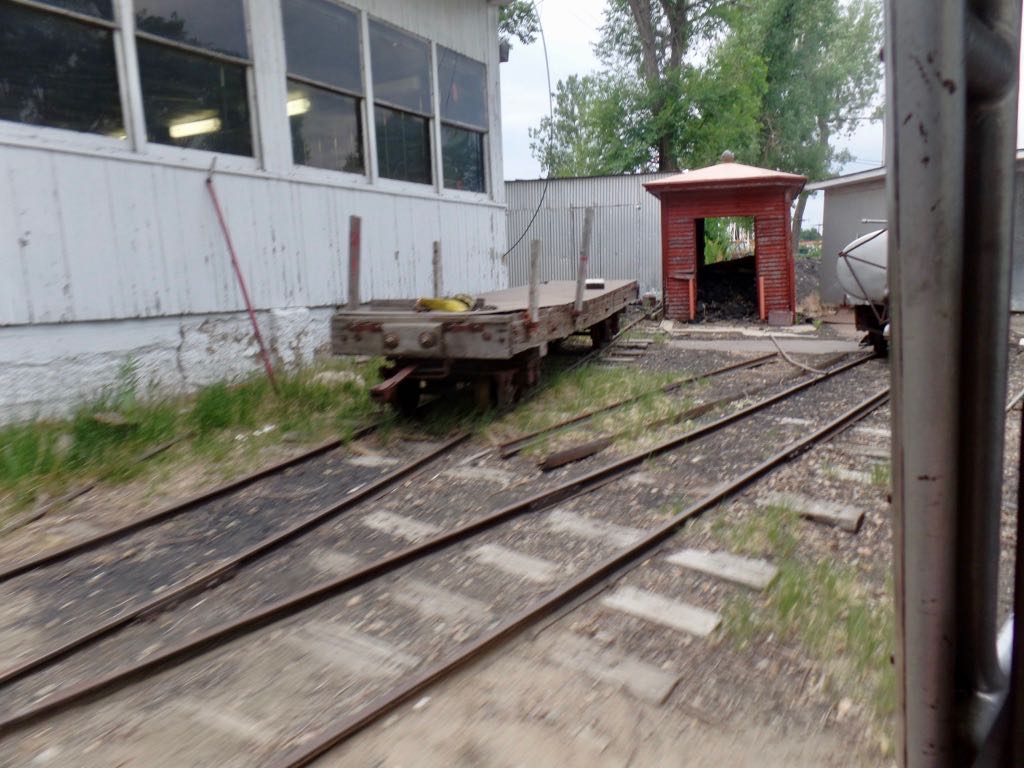 Side track to the railroad including at least one car there that seems oversized for the train. I didn't get a good view of what's all inside the red shack there. 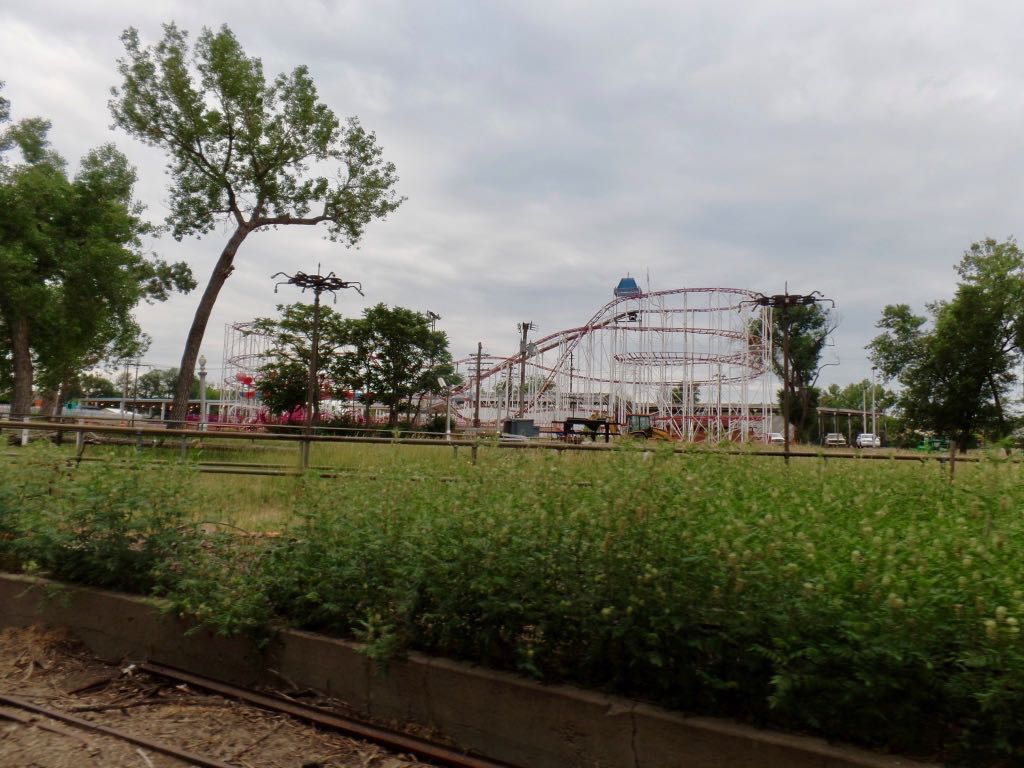 As the train leaves the main body of the park we get this westernmost view of the unnamed Zyklon-class roller coaster.