Pinburgh is coming. It's moved earlier in July: after hanging out at the end of the month several years, now it's leaping up closer, so that it'll be the weekend after Anthrocon. We have our hotel reservation, made a couple weeks ago when one hotel offered

bunny_hugger a surprisingly good deal if she'd just open a new credit card. She knows how to manage credit cards like that. So that's good.

The challenge: buying Pinburgh tickets. Last year they sold out in eight seconds. It was expected to be tougher this year. The tickets were set to go on sale at noon on Saturday. We had a smaller pool this year, just three people: me,

bunny_hugger, and MWS. We had four people ready to buy, though, as MWS's partner K was also going to be at the ready. Last year, both me and

bunny_hugger were able to put tickets in our shopping carts, but K beat us all to actually buying. This year?

We were up ready, on time, and prepared with everything we'd need. (Player names, International Flipper Pinball Association numbers, and e-mail addresses.) We shut down everything that might eat our bandwidth, other than --- on

bunny_hugger's iPod, a chat window with MWS. And we sat, watching the ReplayFX ShowClix ticket window, waiting for 12:00:00 Eastern and the appearance of Pinburgh tickets under the Reserve Tickets panel.

Happily, mercifully, MWS was there, and got in, and got our tickets. But us? We were completely shut out.

Also, it turned out we were looking at the wrong page. That page, which was the one we bought Pinburgh tickets from each of the last several years, was not where Pinburgh tickets were put on sale this year. There's tickets for ReplayFX, the convention at which the Pinburgh tournament is being held, but that's a separate event. No, the page we should have gone to was at another link, one that appears on that previous page under the name ``Replay FX 2020: Competition Signups''. On that page, for a few seconds, Pinburgh tickets would have been on sale. I understand their wanting to put all the various side tournament on a different page. You can see that even now there's a lot of events, pinball and video game and arcade game an other stuff, available. But, jeez, that's confusing. They needed way better communication of where to go to buy tickets. The ``Buy Tickets'' link at ReplayFX's Pinburgh page, for example, points to the page where you can buy ReplayFX but not Pinburgh tickets. I don't know how angry people are being online about this, but, they have reason to be.

There was a similar problem last year, when

bunny_hugger couldn't buy tickets to the Women's International Pinball Tournament (also at ReplayFX) because we were looking at a page that would never have tickets for sale. And other people were confused this year, too: JAB, one of our Lansing League regulars, spent five hours thinking he had beaten the odds and grabbed Pinburgh tickets before he realized, oh, no, he'd just bought entries to ReplayFX instead.

I don't know what he'll do; he was disheartened last I heard. Meanwhile, though, we've gotten in, although by a more near margin than I would have liked. Still counts, though.

Trivia: A portion of Julius Caesar's calendar reform was setting the leap day to be the doubling of the 24th of February. Source: Marking Time: The Epic Quest to Invent the Perfect Calendar, Duncan Steel. (This was the same time when an intercalary month had, previously, been occasionally inserted.)

Currently Reading: The Art of Atari, Tim Lapetino. So, I want to laugh long and hard at the Atari Mindlink, a prototype video game controller which wrapped across your forehead. The idea was that it could read the small twitches in your forehead to control a game, although in practice, people could uset his for a couple minutes before they got a headache even worse than that given by the Atari 2600 port of Pac-Man. But then I think: you know, if this could have been made to work, it could've given us decades of video game accessibility to people who have poor hand control and that would've been a great thing.

PPS: Santa's Workshop! We're coming near the end of the day. 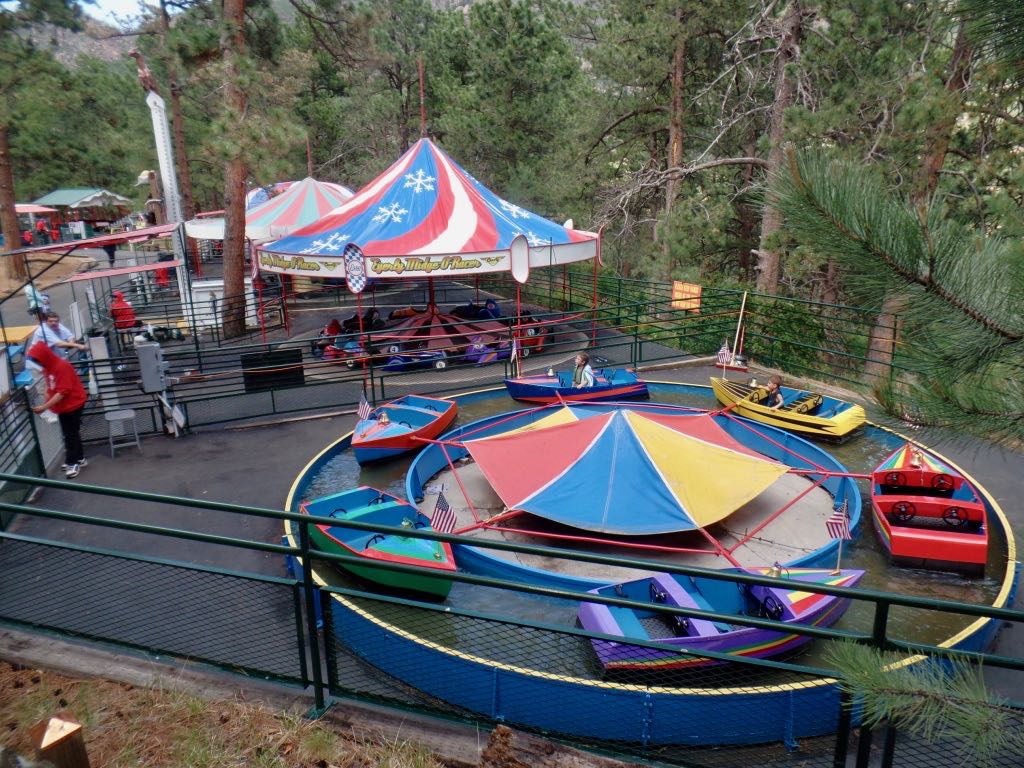 Walking downhill towards a concentration of rides. The park is, as the theme suggests, very kid-oriented so these are all rides too small for us to ride ourselves. 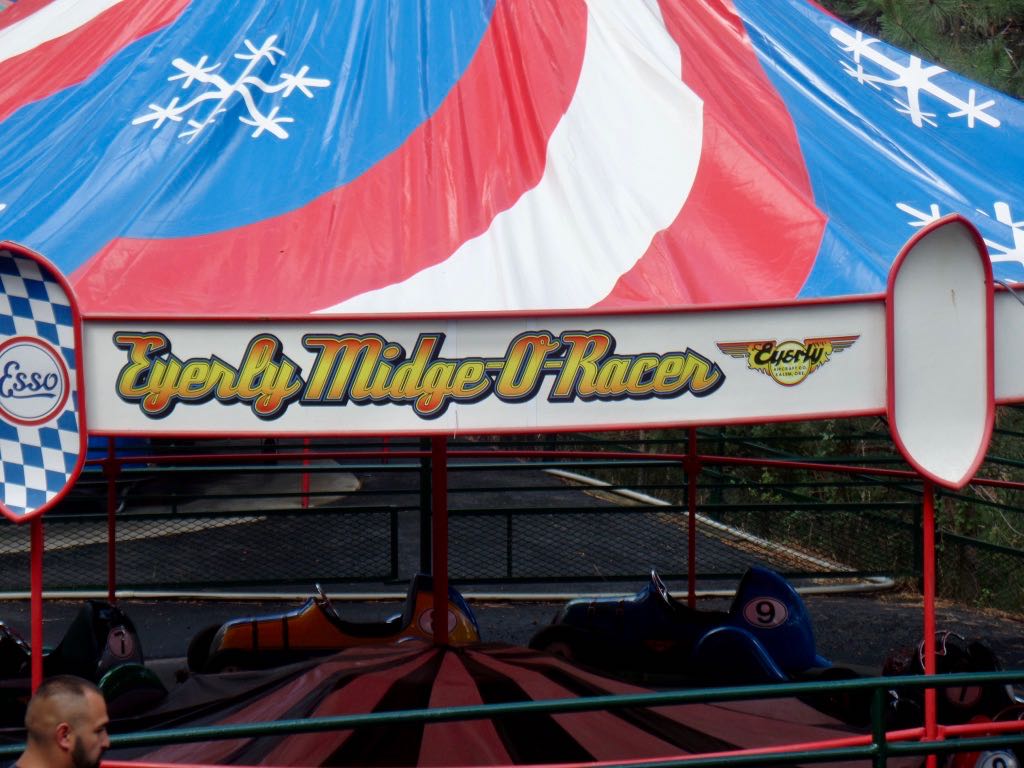 The Eyerly Mide-O-Racer? This was an eye-opener. We knew of Eyerly for rides like the Loop-O-Plane and the Rock-O-Plane. That their naming scheme extended to making the Midge-O-Racer was a surprise. 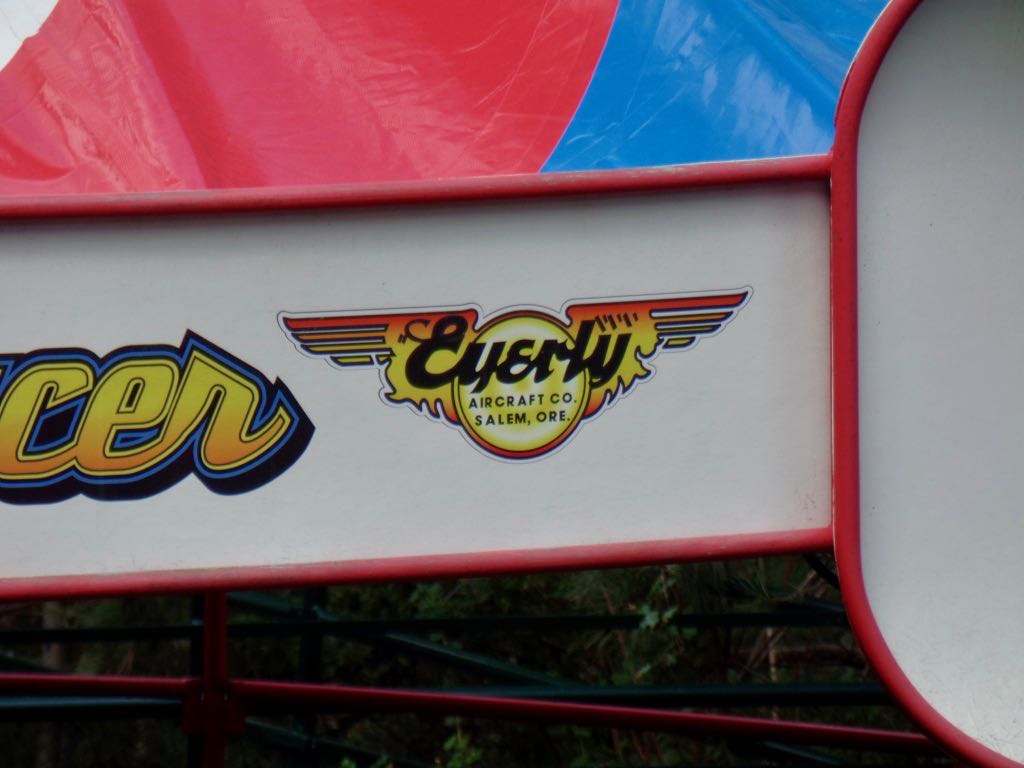 And a close-up on their logo. It's the Eyerly Aircraft Company because they started out building cheap planes for flight training, which turned into stationary ground-based flight trainers, which turned out to be good for pilots and for amusement parks. It's not the case that all their rides were named noun-O-verb but it sure made for a punchy format.