And now, at last, we bid farewell to Denver, thinking how much it would be nice to get back and spend a little more time there. 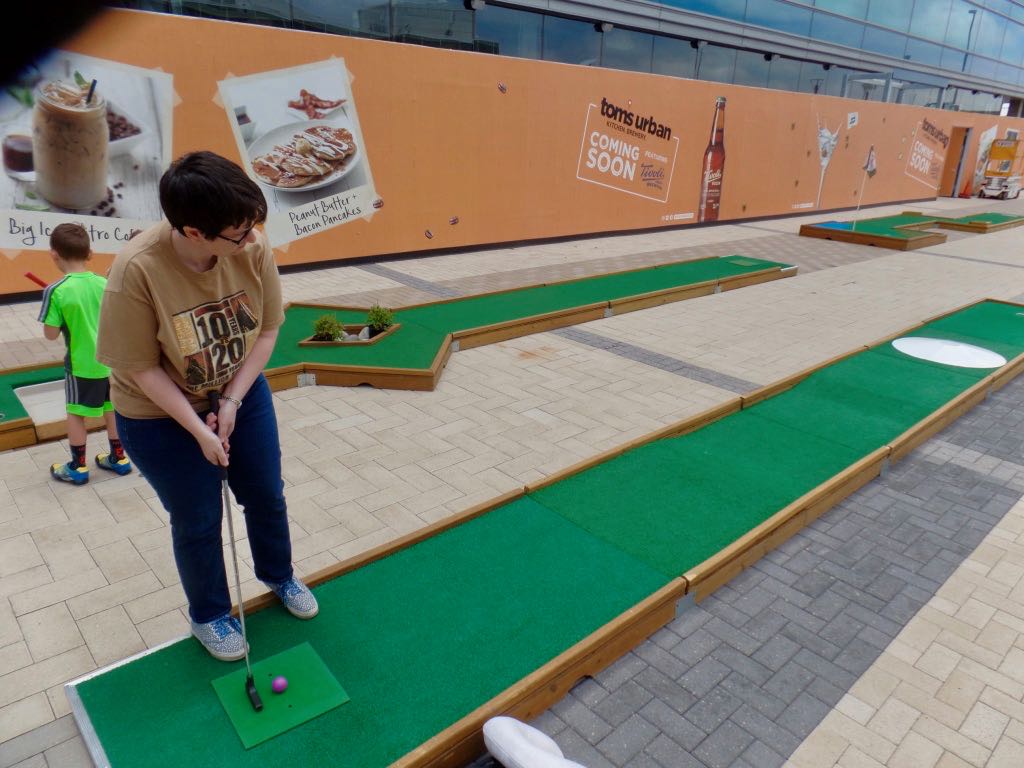 At the Denver Airport they'd set up a miniature golf course in some outside space. Of course we'd play. It was a really good way to pass the couple hours we had between when our rental car needed to be back and when our flight would leave. 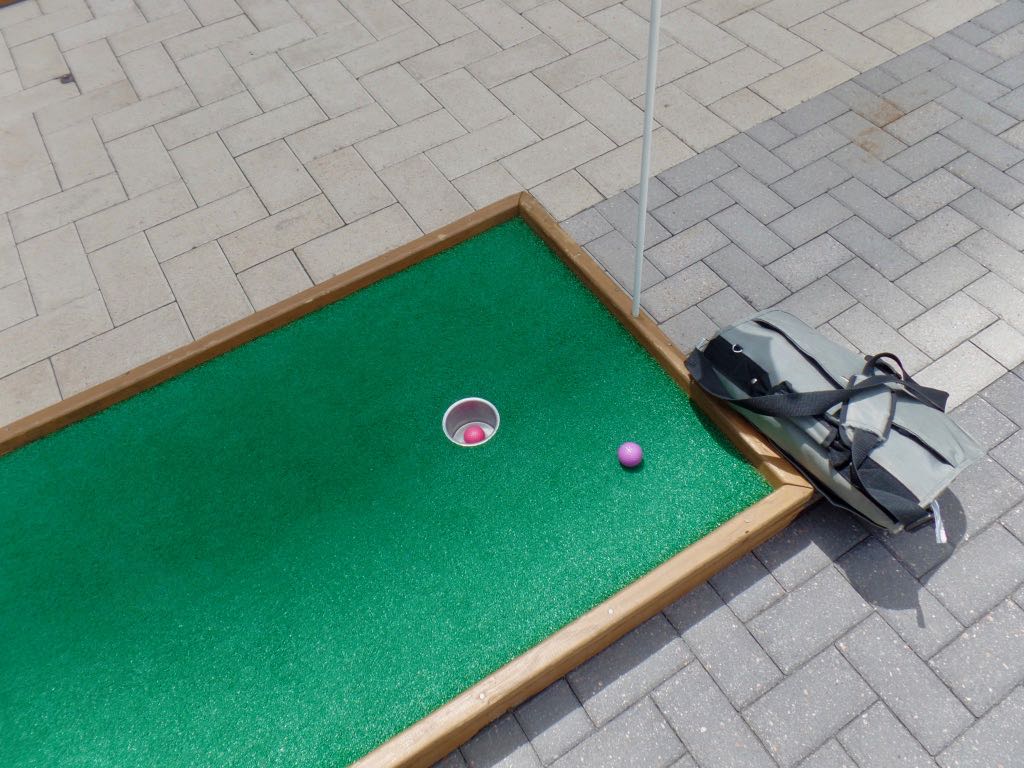 I was going to say this was

bunny_hugger having a better hole than I do, except she usually picks the purple ball if that's available. 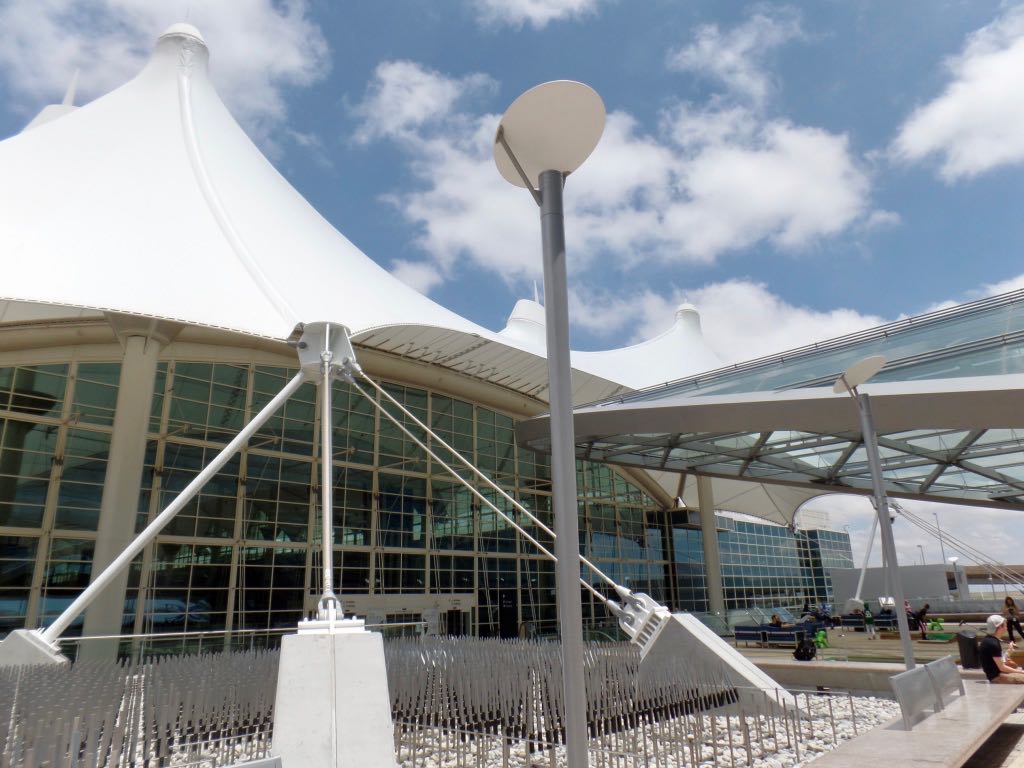 Part of the rooftop sculpture was this field of flat metal strips that wave in the breeze. I believe it's meant to evoke the grasslands torn down to build things like Denver and airports. 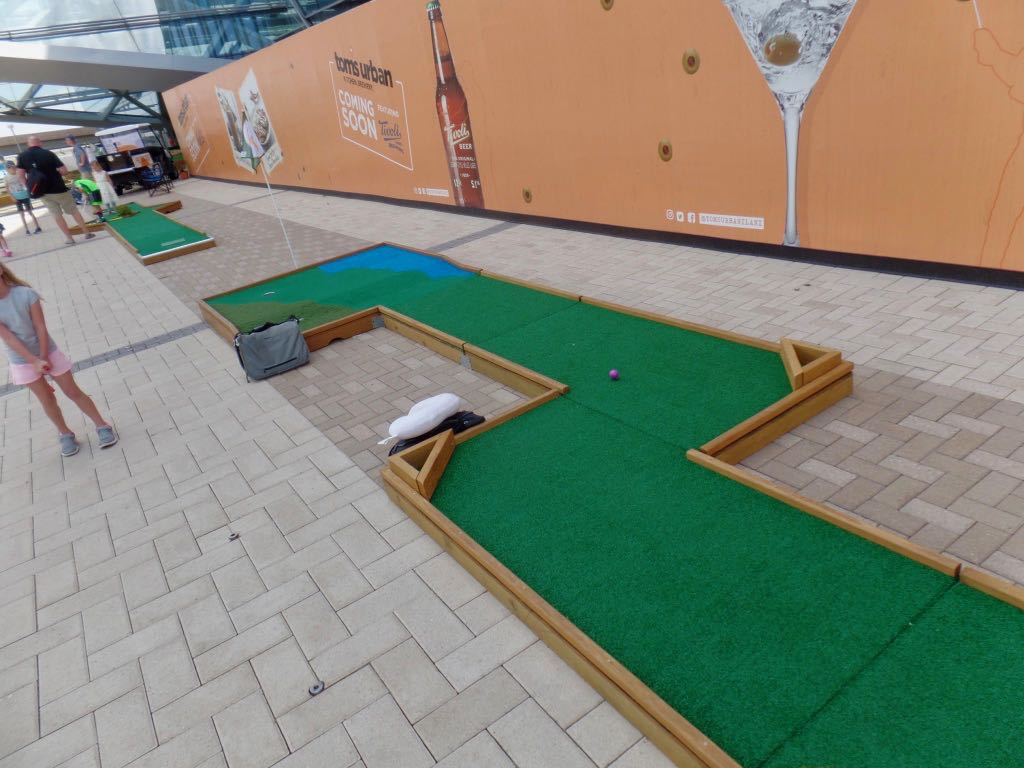 Criminy, though, these holes, you know? 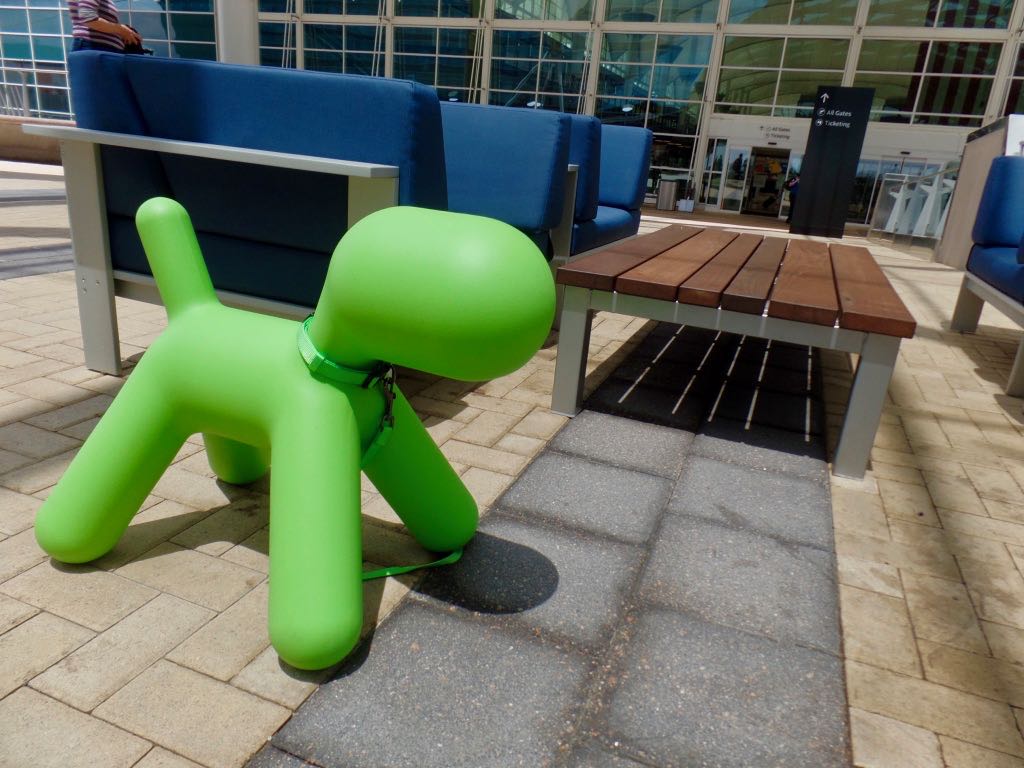 A couple of seats and a faceless dog-like creature sitting in some of the outside area. 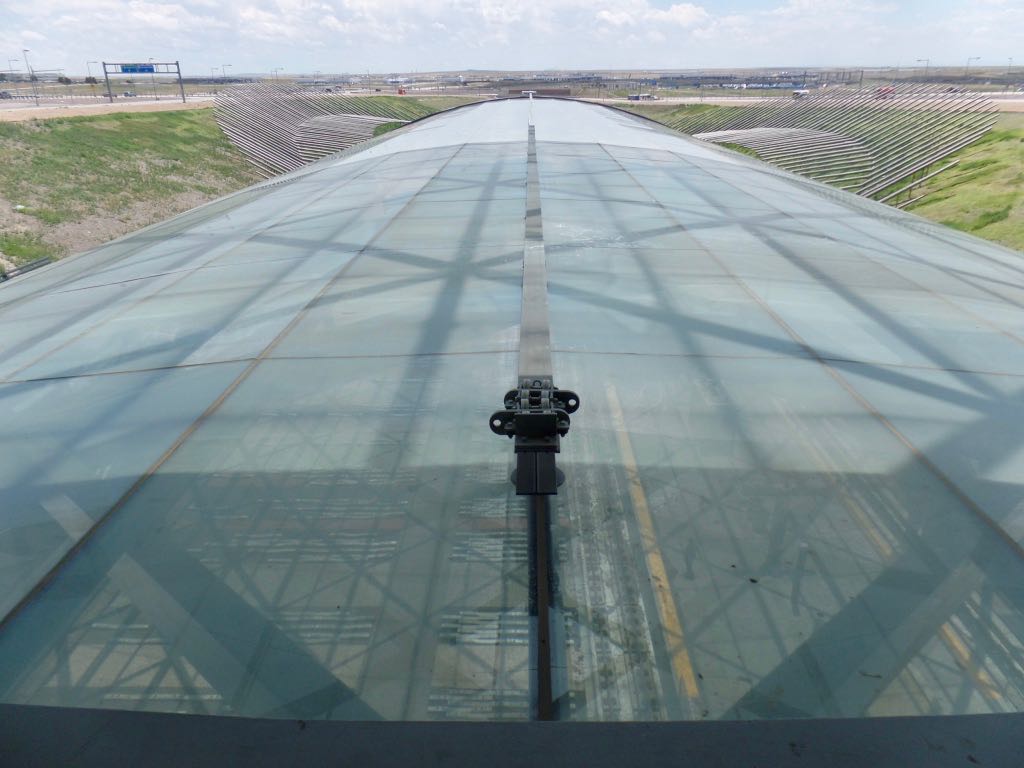 The outside area is on the roof of the airport. Here, you can see through the curved roof of one of the entrance halls and screening areas. While the curve makes me think of an airplane wing it's really just the way an arched roof looks from above. 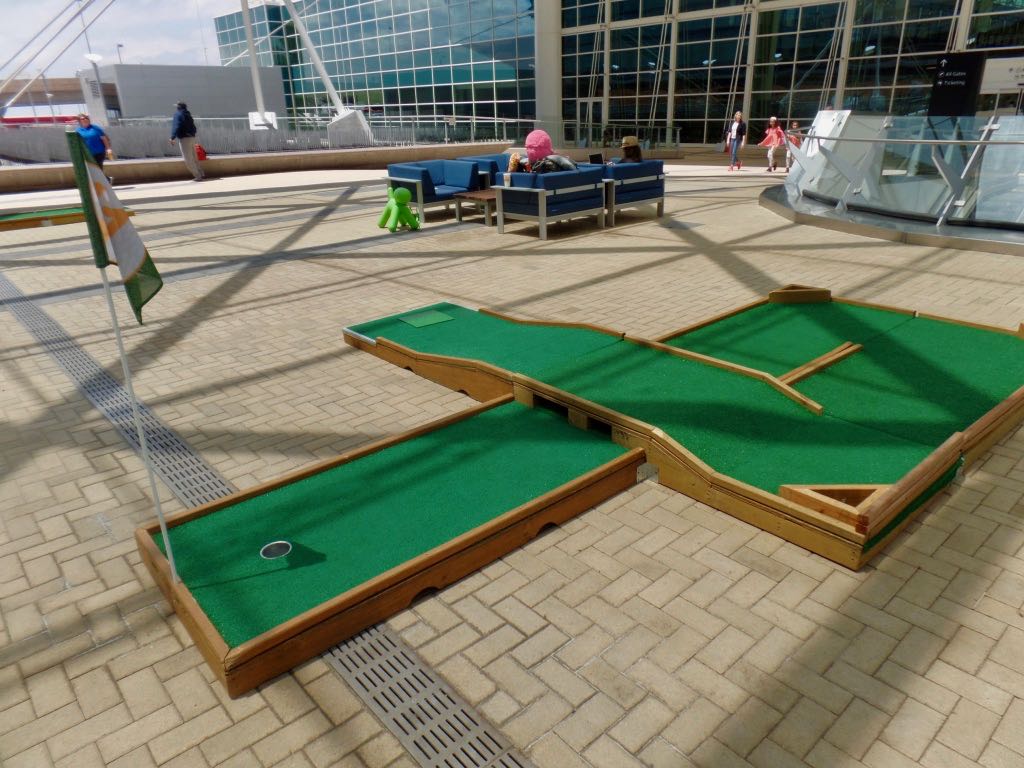 Yeah, good grief with the hole here. If someone goes and makes a hole-in-one on this their opponent has the moral right to stab them. Here's a torturous little hole: the only way into the hole is to shoot way up this ramp, hit a cornered panel just hard enough that it bounces down into the scoop in back, and roll into that area. Neither of us, nor another person playing behind us, got even close to that. I went back and tried just shooting the ramp, from the base of the ramp, a half-dozen times before I sort of made the shot. 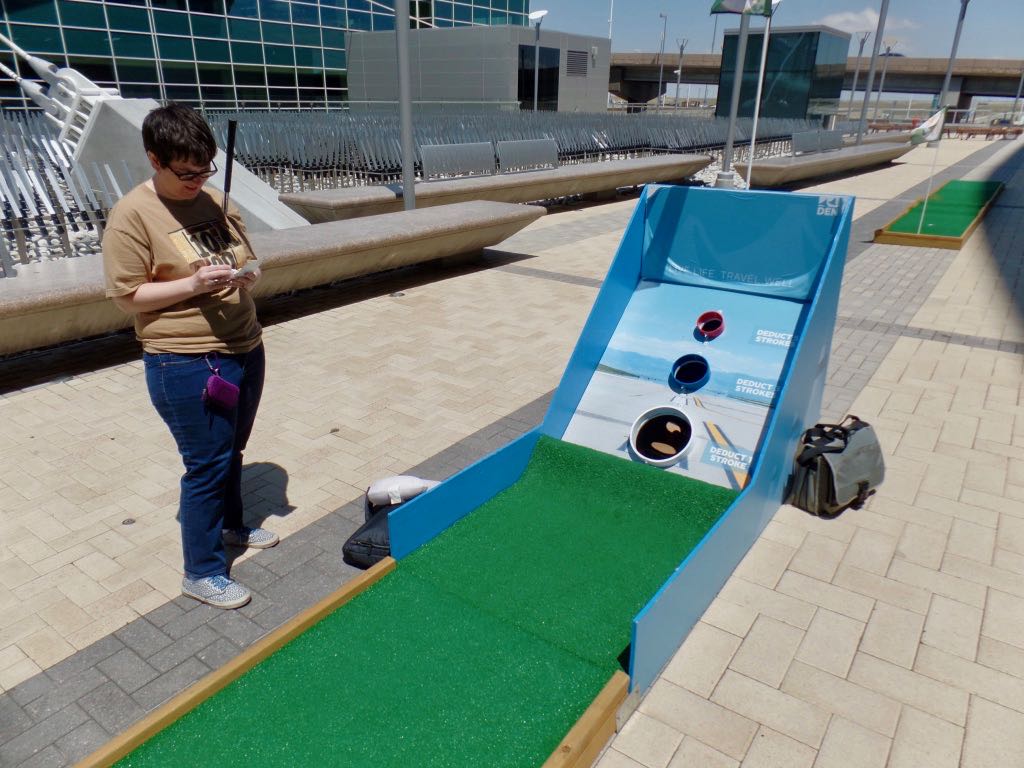 bunny_hugger totalling things up at the final hole which, as you can see, offers people who get into one of the holes the chance to deduct 1, 3, or 5 strokes from their total. She got the deduct-three-strokes hole, bringing her to a win. 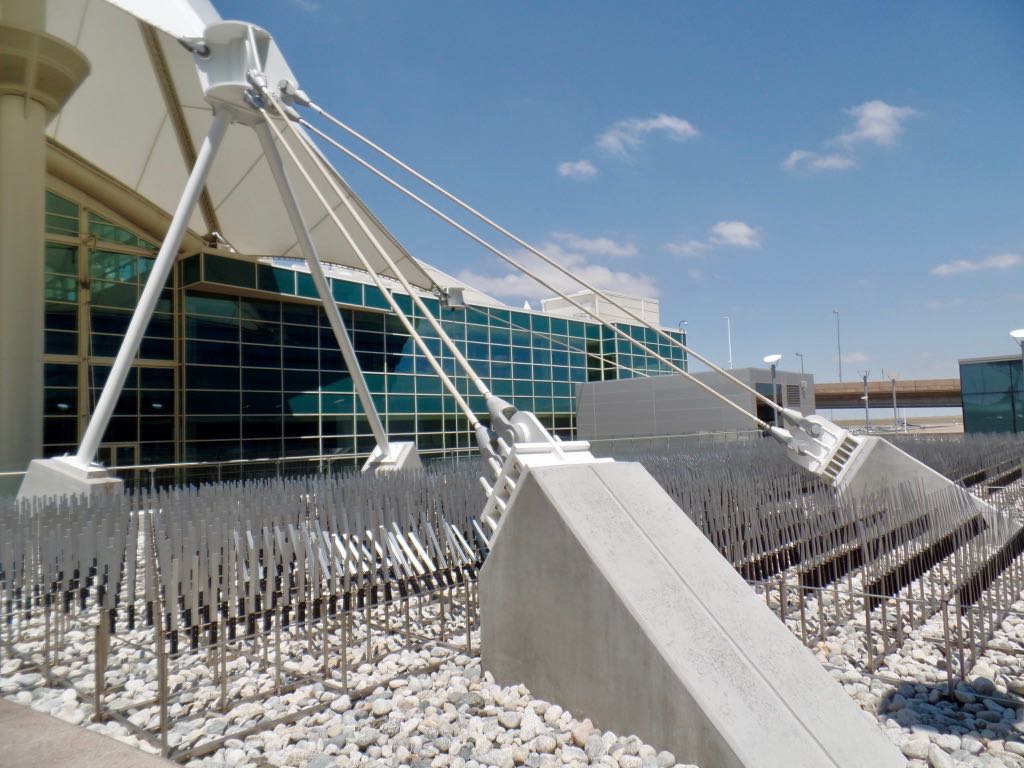 Another look at the field of metal blades, many of which have folded over in that evocation of waves of grain. 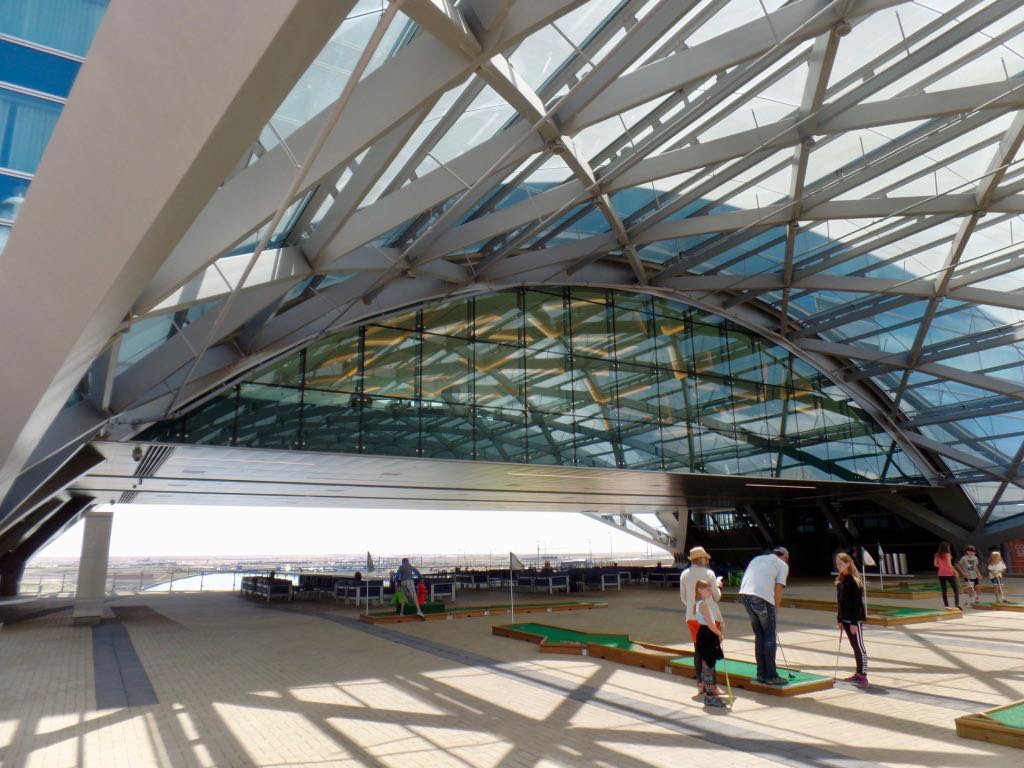 Most of the miniature golf course, and the lounge area, despite being outside is still under cover. Makes for a good spot to wait for your plane, at least if you're there in summer. I imagine this is less jolly fun in February.

Trivia: The initiator for the Space Shuttle's Solid Rocket Booster would set off a 1.4 gram charge of pyrotechnic, a granulated mix of boron and potassium nitrate. This ignited the main charge, eighteen grams of the same material. Source: Development of the Space Shuttle 1972 - 1981, T A Heppenheimer. (To give some sense of scale, our pet mouse, admittedly an overweight one, weighed in at 54 grams.)

Currently Reading: The Museum of Hoaxes: A Collection of Pranks, Stunts, Deceptions, and Other Wonderful Stories Contrived for the Public from the Middle Ages to the New Millenium, Alex Boese. This is all extremely easy reading about hoaxes, real and alleged, over the ages and it smells like ``web site devoted to kooky did-ya-know thing of the day turned into a book''.

bunny_hugger pointed out it has got strong People's Almanac vibes to it, and this is true and a good thing.

PS: How To Multiply Numbers By Multiplying Other Numbers Instead, which might someday help you multiply a tiny bit faster by doing your multiplications ahead of time first.