After a bunch of Reading the Comics posts last week, I have a brief pause to make one last appeal for stuff for the Playful Math Education Blog Carnival. If you'd like to contribute anything, I'd love to share any web site you've run across that talks about some mathematics subject in a way that delights you. In the meanwhile, here's what I did post over the past week in my mathematics blog:

And now? Pinburgh 2018, Friday. Day two. My final-four finish in D Division in 2017 meant I could not play in anything lower than C. And then, embarrassingly, I didn't play well enough to finish in C Division on my own; I was restricted in, and so came in at the bottom of the division. This had some weird side effects, to wit ... 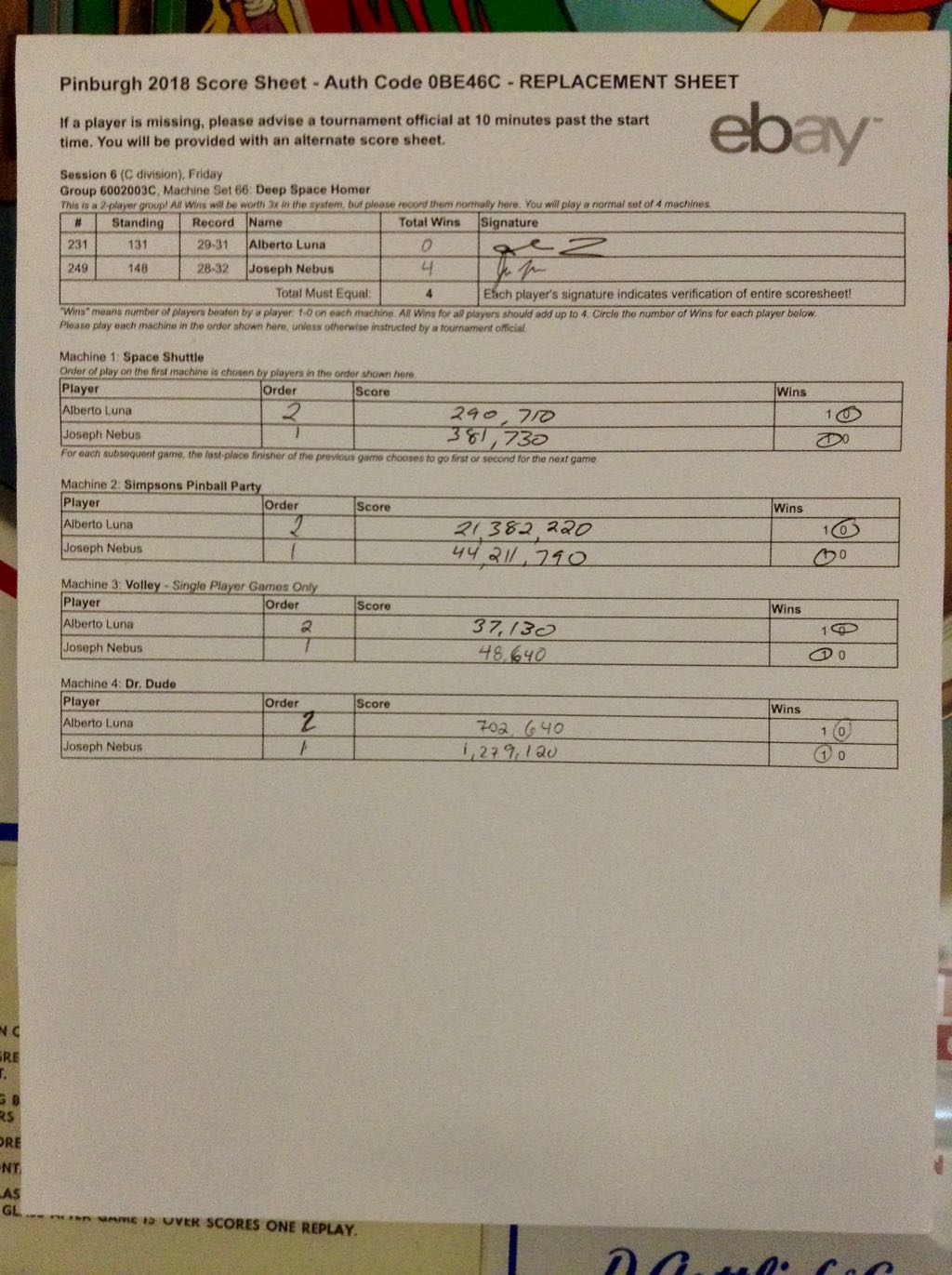 So I went in at the bottom of C, in what should have been a three-player group. Unbeknownst to me, or to A- L-, the third player in our group had decided to just go home, saying in the pinball groups that he didn't see a reason he needed to stick around after having a lousy first day. Well, one reason would have been to warn the tournament officials so they could have drawn the groups better. As it was, they had to redraw us as having a two-player group, and I won each game, and so got credit for a perfect round. That's amusing and silly enough, but A- L- but dinged for a perfect-failure round, sinking his hopes for making playoffs right away. And, just, look at those scores. OK, yes, in a real three- or four-player group my Simpsons score would have won, but A- L-'s would have gotten second place. The Space Shuttle and Volley scores are hard to handicap, but ... seriously, what I probably would have earned in a real group would have been eight or nine wins, and A- L- certainly at least four, plausibly six. 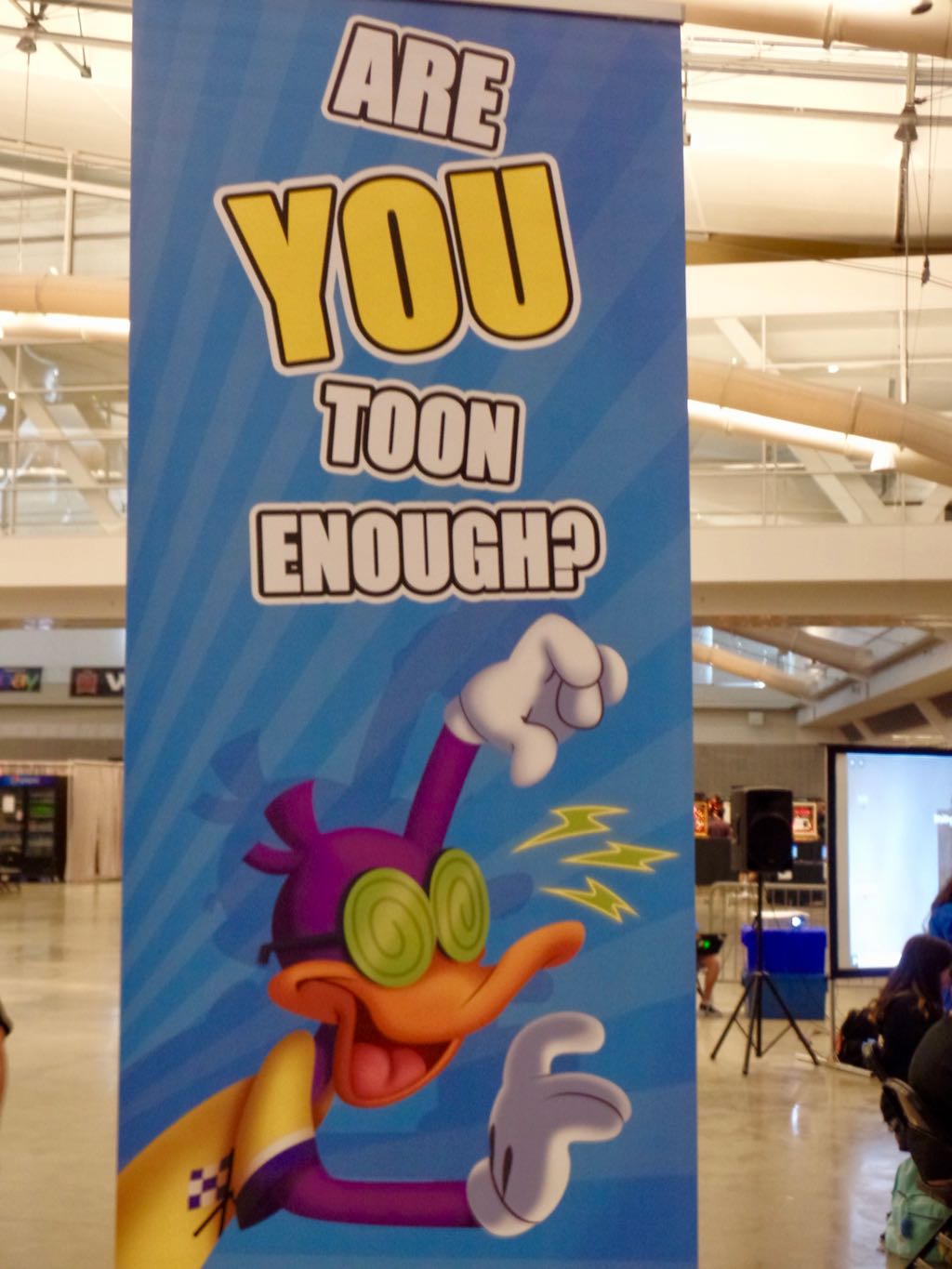 Toontown Rewritten always has a booth, and always teases folks like me with this question. 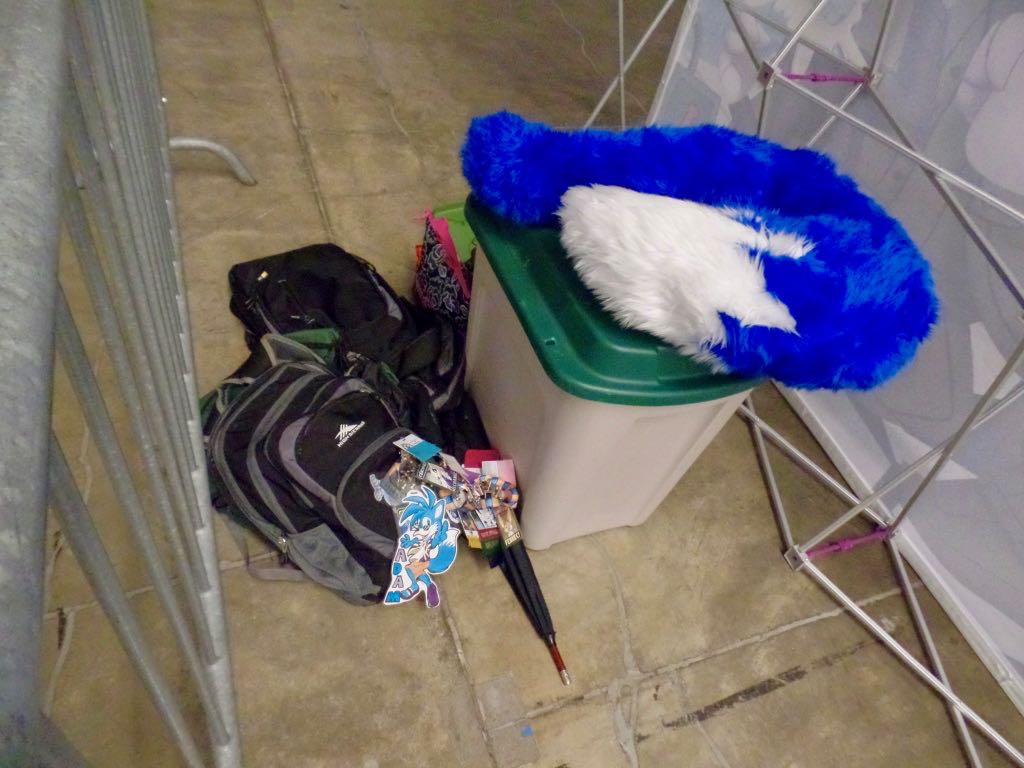 Pinburgh was held a few weeks after Anthrocon that year (this year, it's scheduled to be the following weekend) and, sure, some people make it to both. 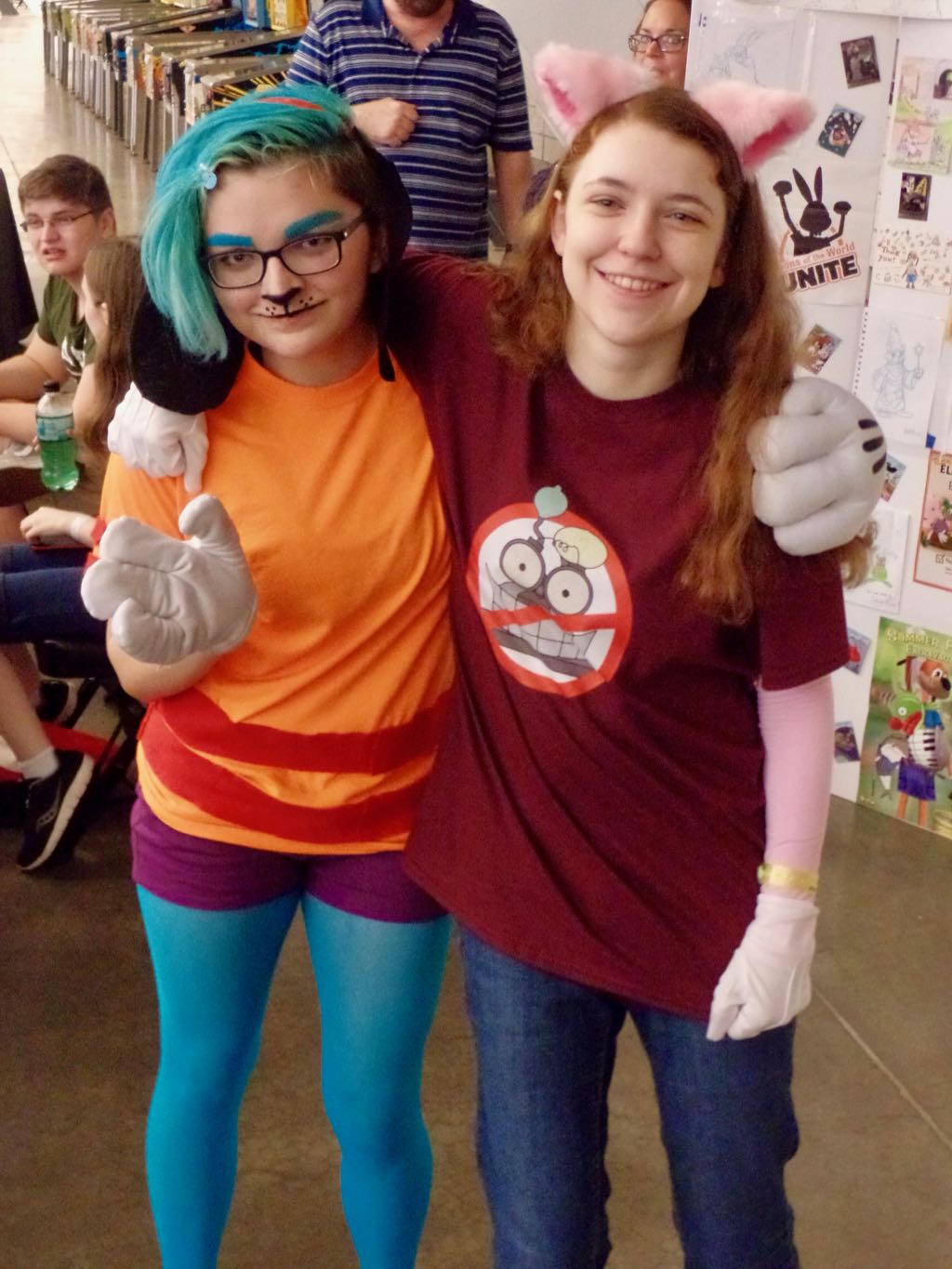 The Toontown Rewritten booths had a bunch of props and makeup and such for people who want to play a bit. I know people who'd like those gloves. 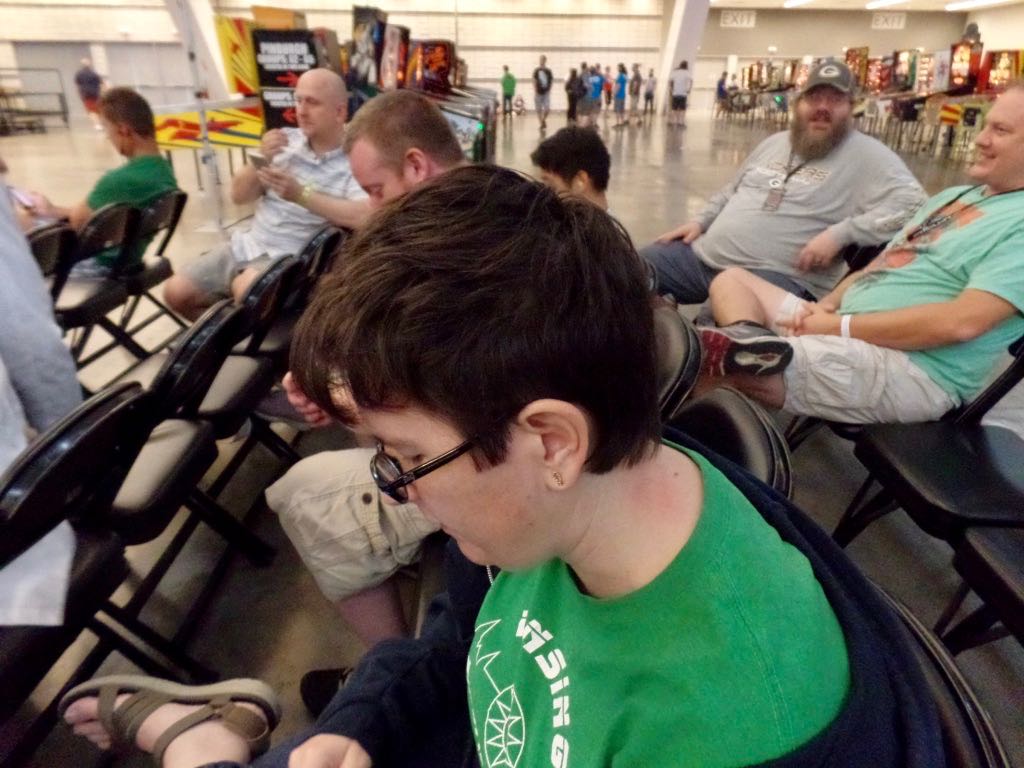 bunny_hugger checking in on, probably, the standings and not happy with how the next round is looking. . 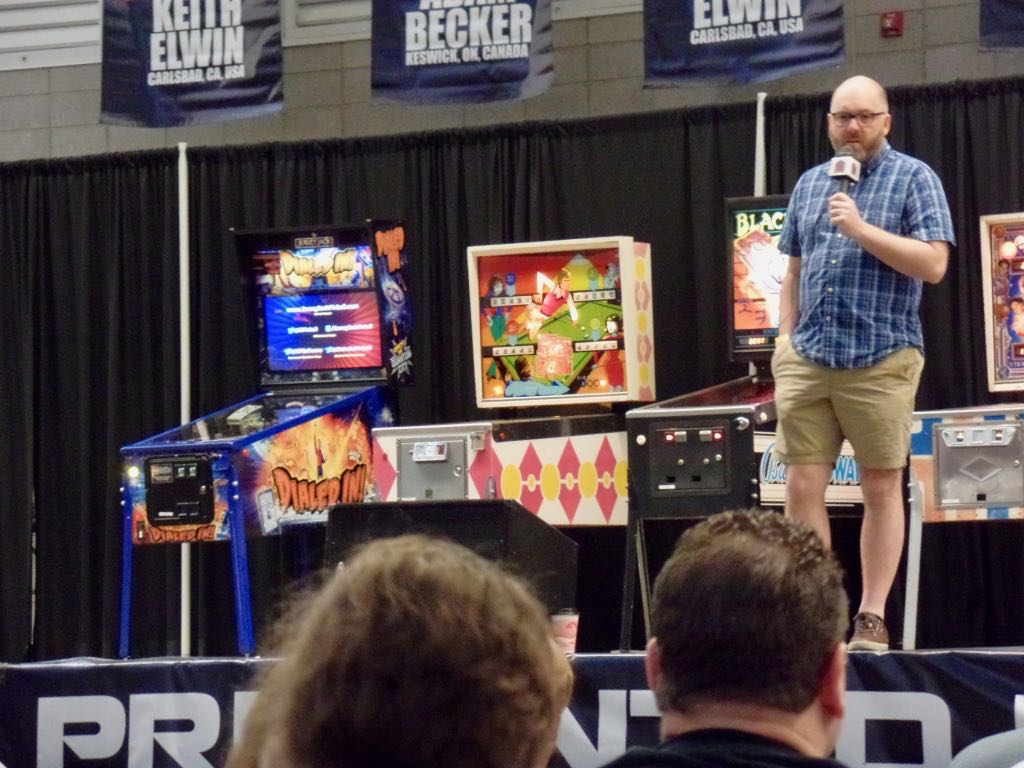 Inspiring words we could kind of make out in-between rounds. 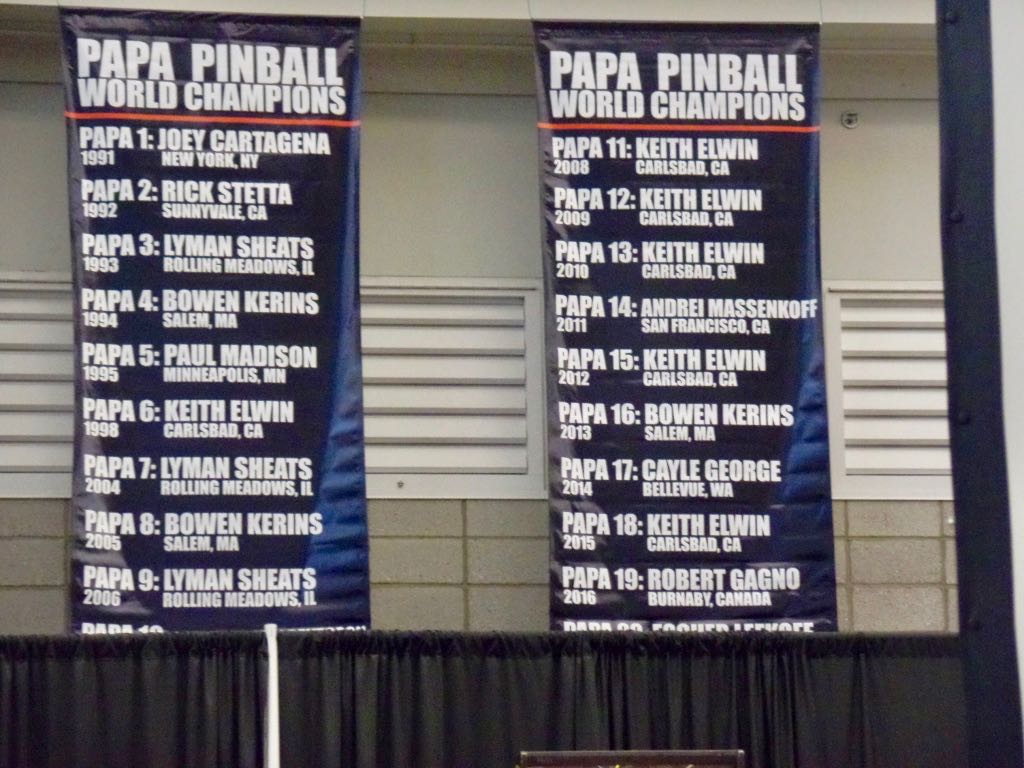 bunny_hugger's father will ask Alexa who's the greatest pinball player of all time, and it will answer Rick Stetta, a name that when

bunny_hugger and I first heard it, could not even parse because we never heard it before. Well, there you go. The word I hear is that Stetta remains an amazing, world-class player, but that he's exited competitive pinball so there's no judging. Most people today would name Keith Elwin the greatest (actively competitive) pinball player and you can see why. Lyman Sheats, who's got a lot of mention on the left side there, is a programmer who literally wrote the rules for a lot of the Williams games of the 90s and the Stern games of the 21st century. 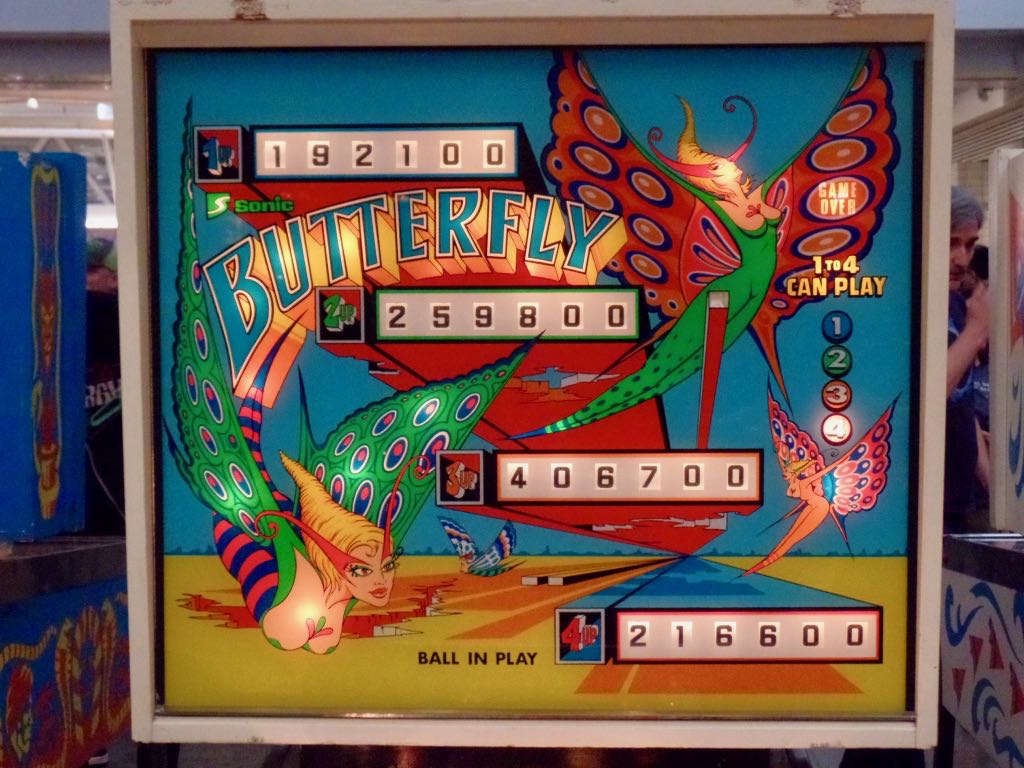 Pinball backglass art has a certain reputation, but if you look to early-70s stuff, or overseas stuff, you get some art that's really pretty wild if not avant-garde. 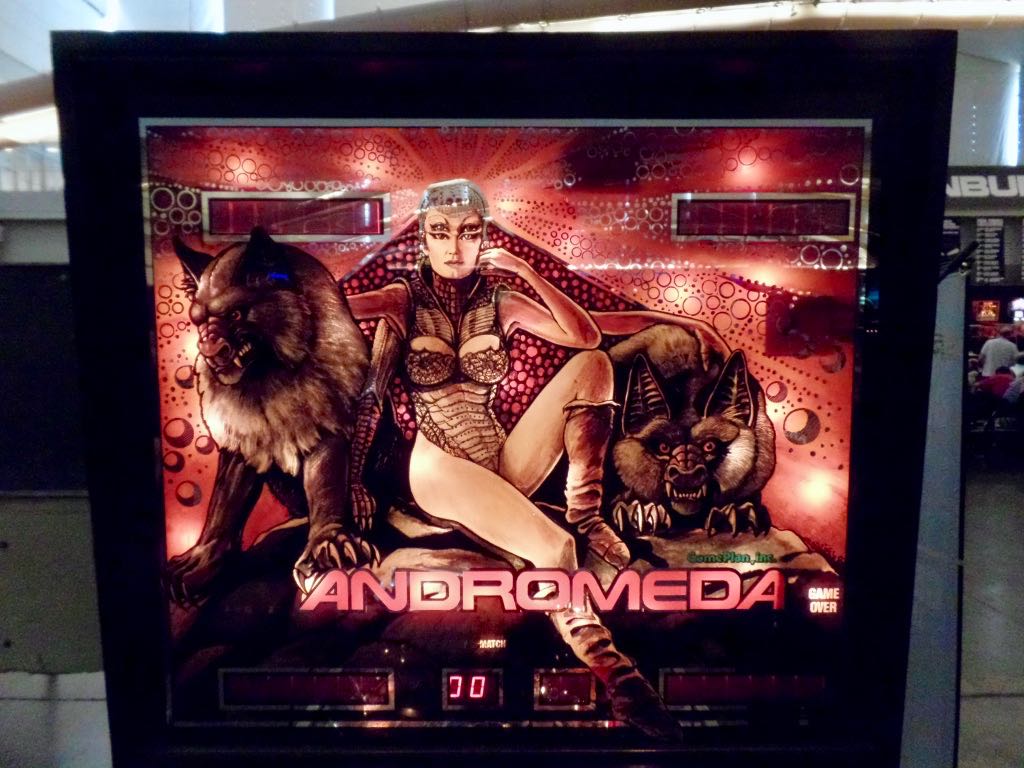 Then by the early 80s and minor companies you start getting things like this, a four-armed, four-eyed woman that's quite at ease with her wolf-bat companions. 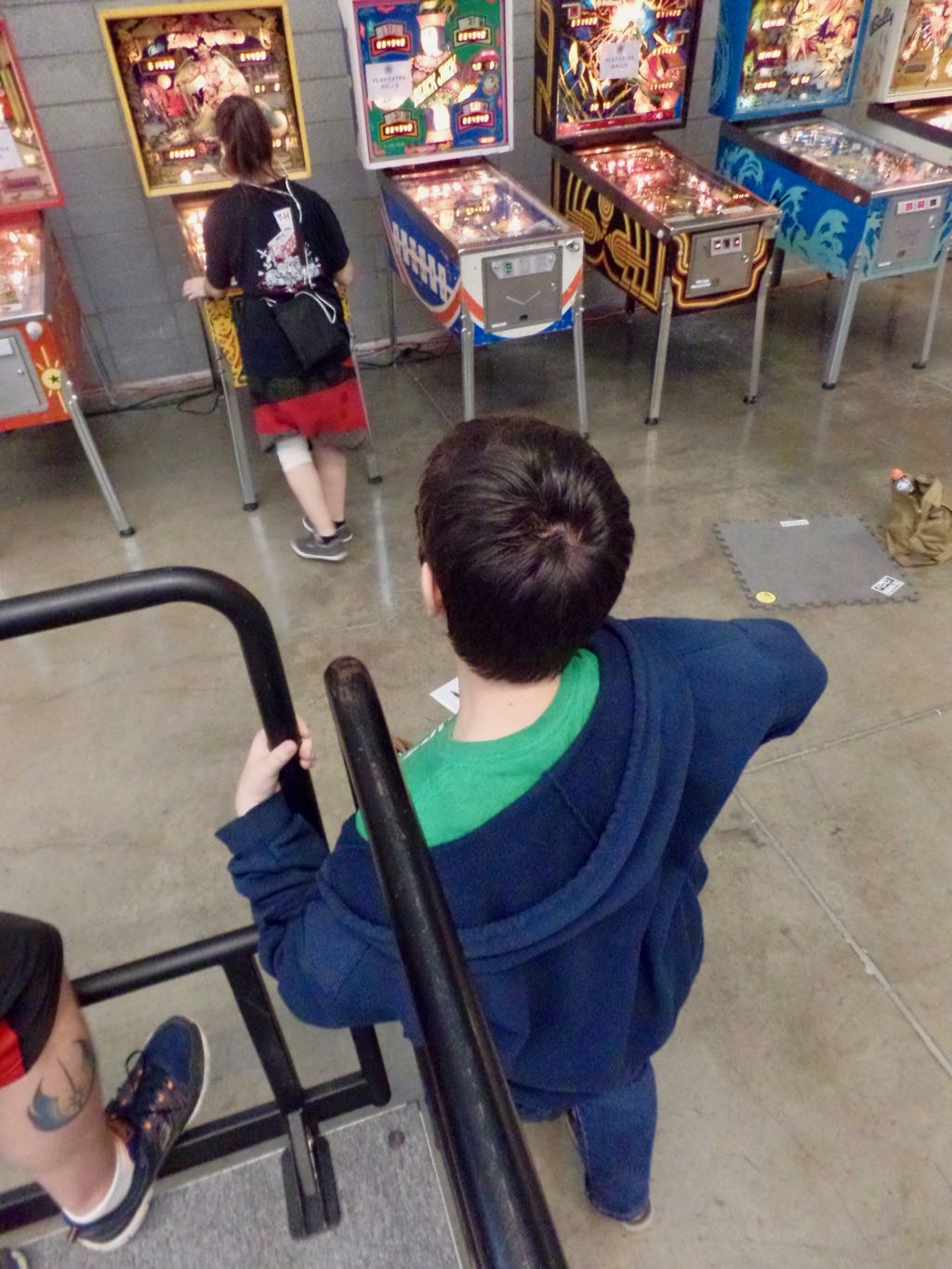 bunny_hugger, waiting for her turn, after a bunch of game mechanical failures sent her group to the backup banks. They're playing Lost World, not a favorite of hers. 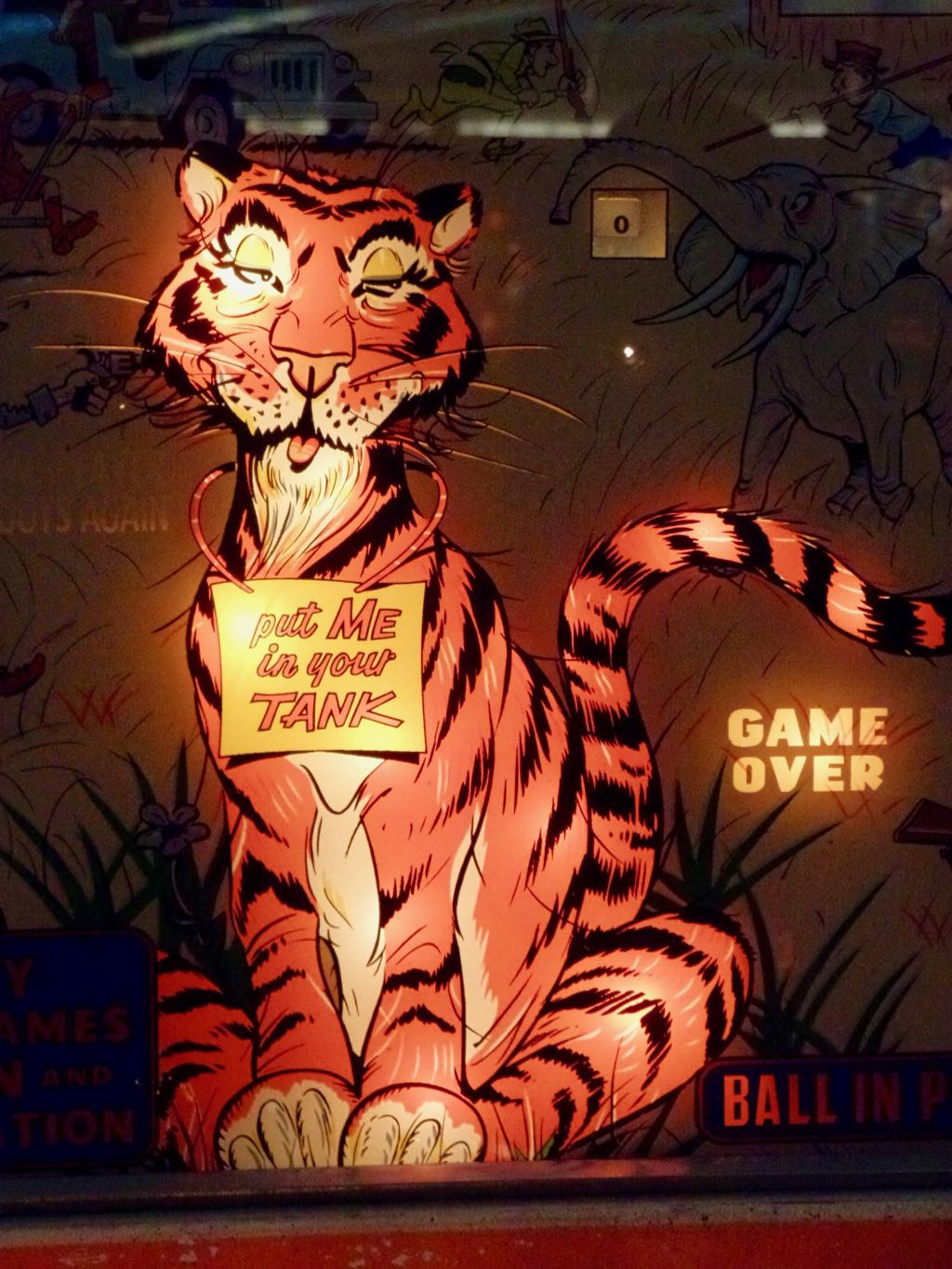 Some of the backglass art for the 60s game Safari, featuring a tiger who can only be described as thirsty. 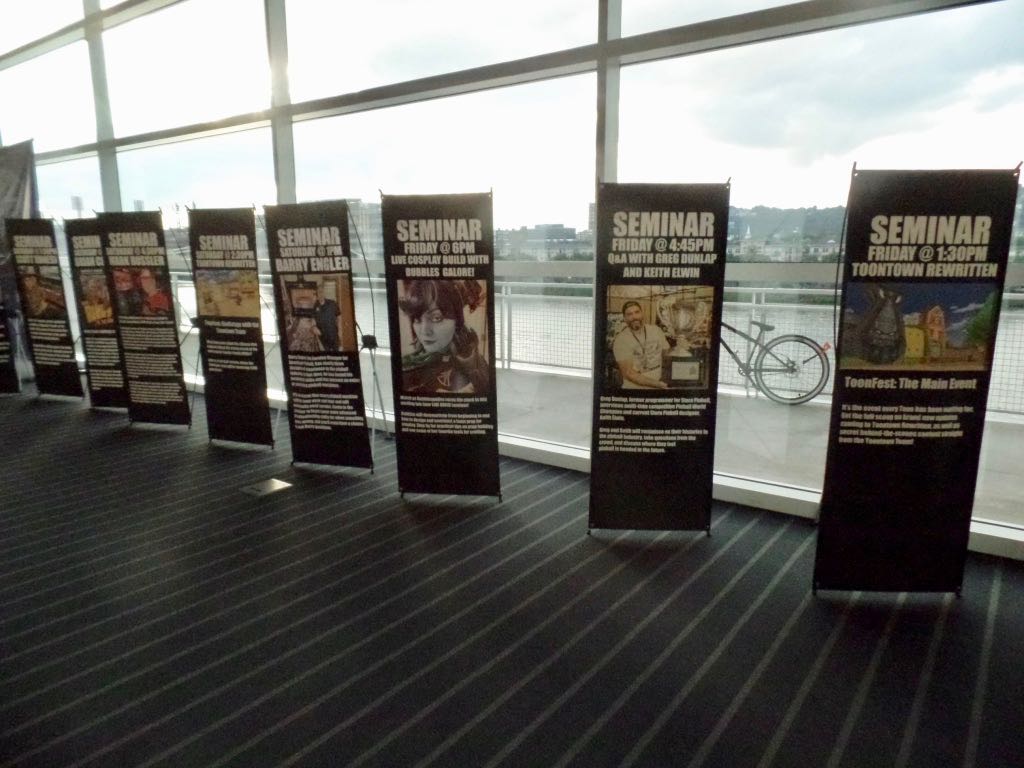 Standee posters out in the hallway showing the kinds of things that we missed because we were doing stuff like playing The Lost World or Safari or Butterfly.

Trivia: More than a thousand people working on the Panama Canal were admitted to hospitals in June of 1905 alone, including at least one admitted for bubonic plague. Source: The Path Between The Seas: The Creation of the Panama Canal, 1870 - 1914, David McCullough.

Currently Reading: Walt Kelly's Pogo: The Complete Dell Comics, Volume Five, Walt Kelly. Editor not at all discernable from the front matter and granted it's one essay about Kelly plus a couple of comic book reproductions, but somebody did the work of organizing its assembly.