Kept my humor blog going all week, even as I got to sending increasingly annoyed e-mails to my co-workers who seem to be almost deliberately ignoring the point of the questions I ask them. Has not been fun. If you would like to join the actual fun, though? Here's the past week's postings.

A bit of a change for today's photos: pictures us taking our pet rabbit outside for a stretch. 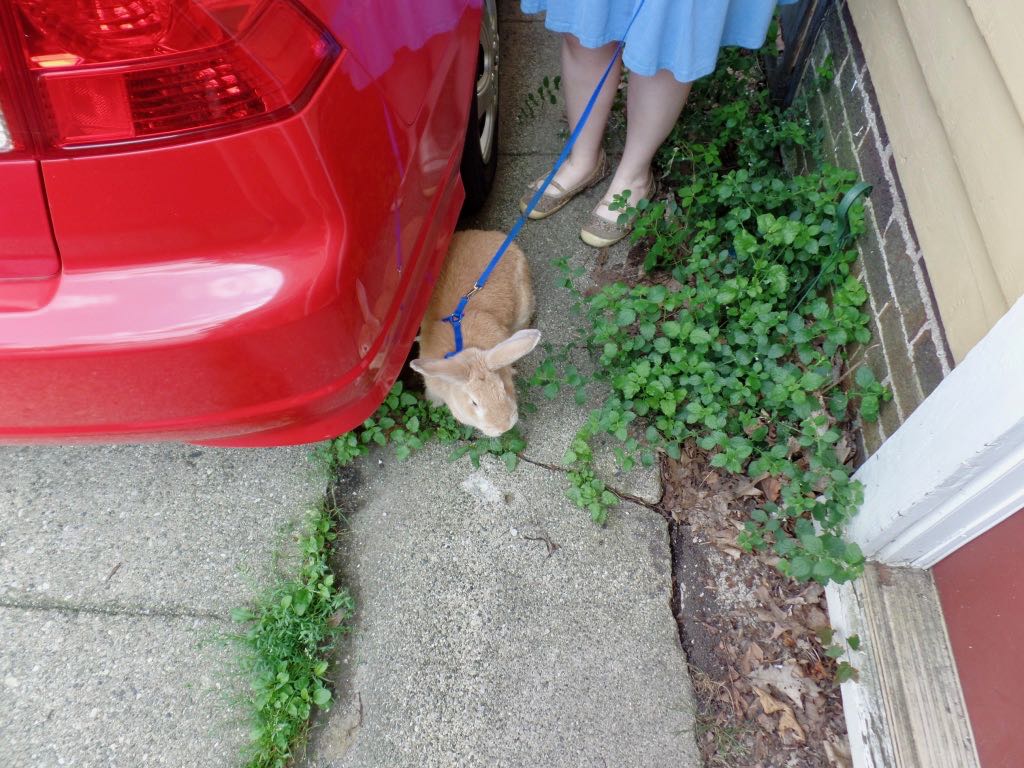 Sunshine took to the harness pretty comfortably --- some rabbits just will not take it --- and she seemed pleased to find out where all that mint she gets all summer comes from. 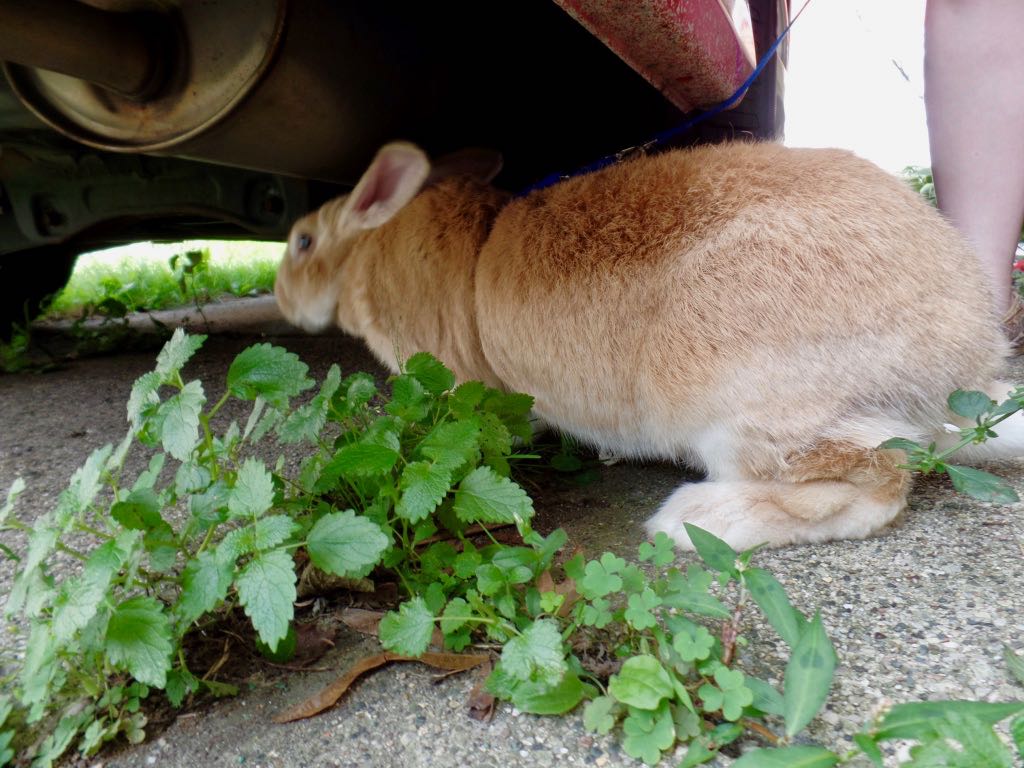 Here, Sunshine spots a problem where the brake calipers are starting to rust; it's not a serious problem yet, but since you have to replace them in pairs the still-good one has to go too, and it'll be about $450 to fix. 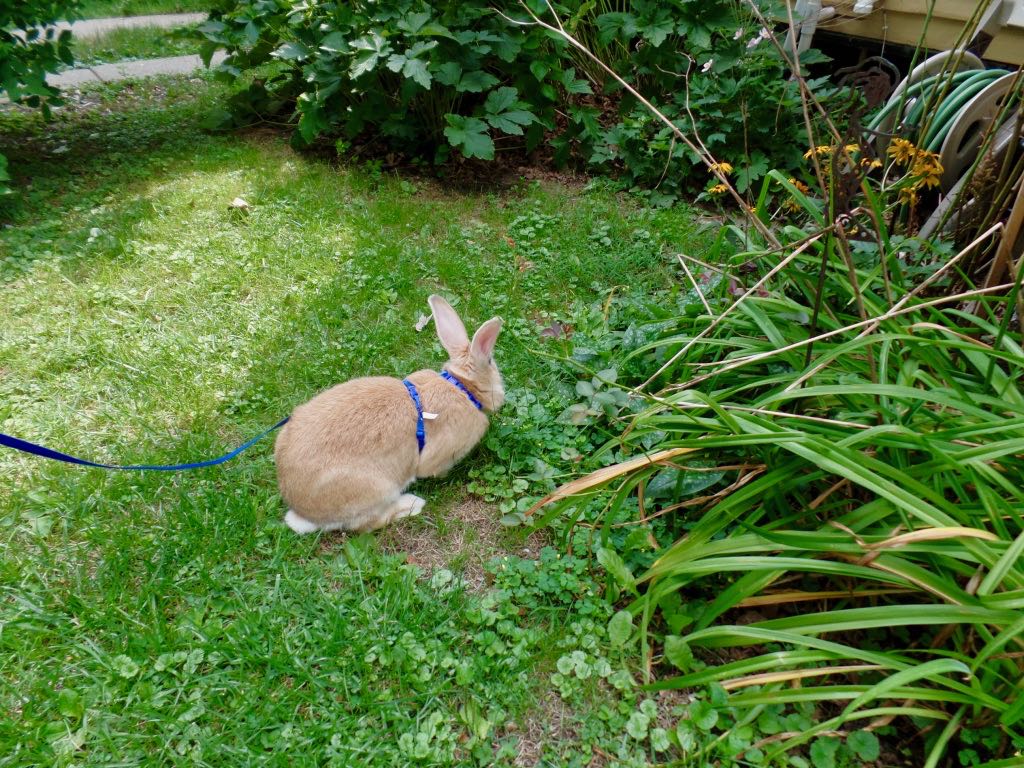 But what we really did was take her out back where she could explore all sorts of nice lush grass and ... 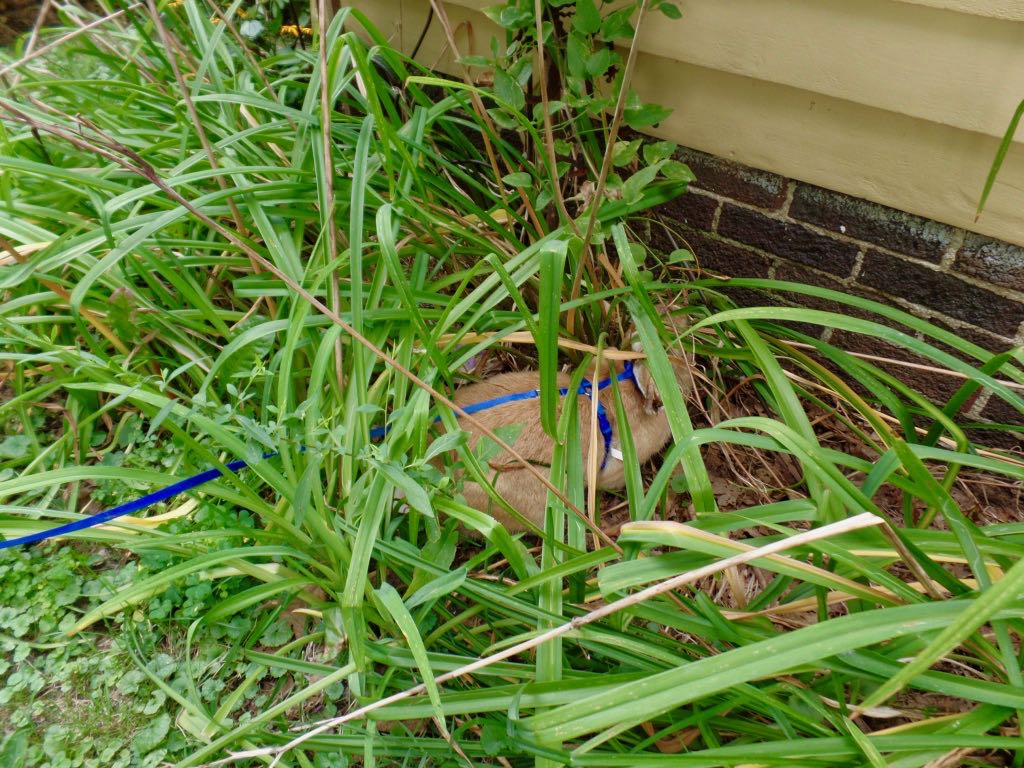 Oh, of course. She wants to nest into the muddy tangled underbrush. Figures. 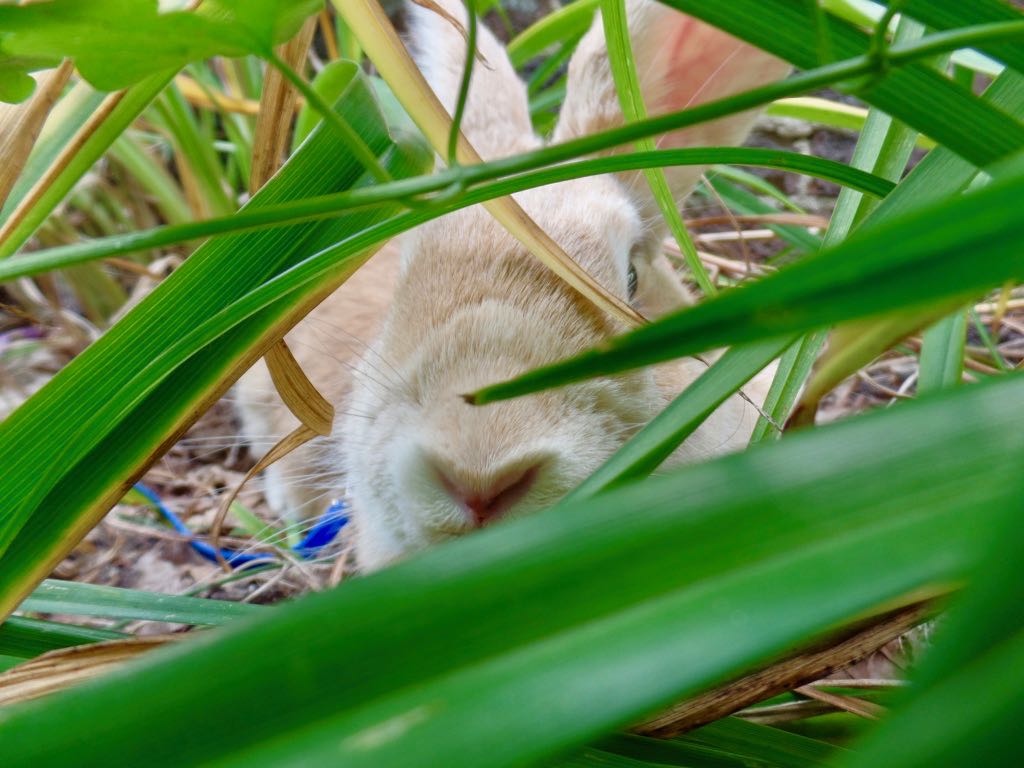 Rather sure she enjoyed peeking at us through the plants, though. 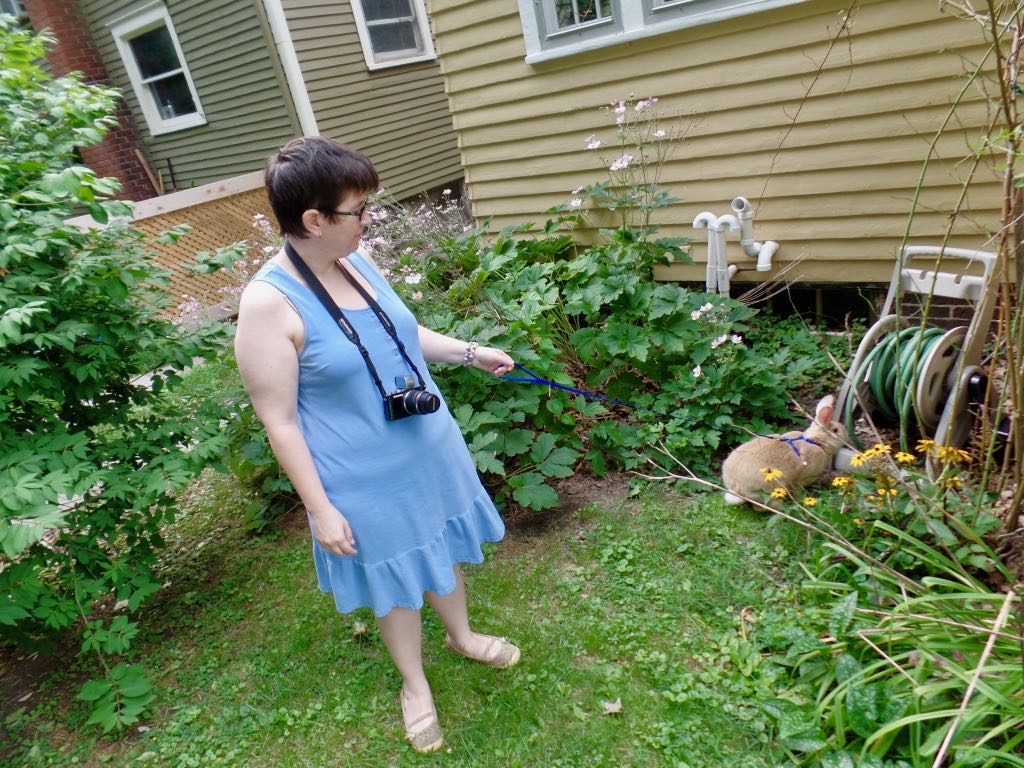 Sunshine examines our garden hose minder, and rubs it with her chin, so now it's hers and there's no disputing that. In the background, by the way, you can see The Brown House, so called because it used to be brown. 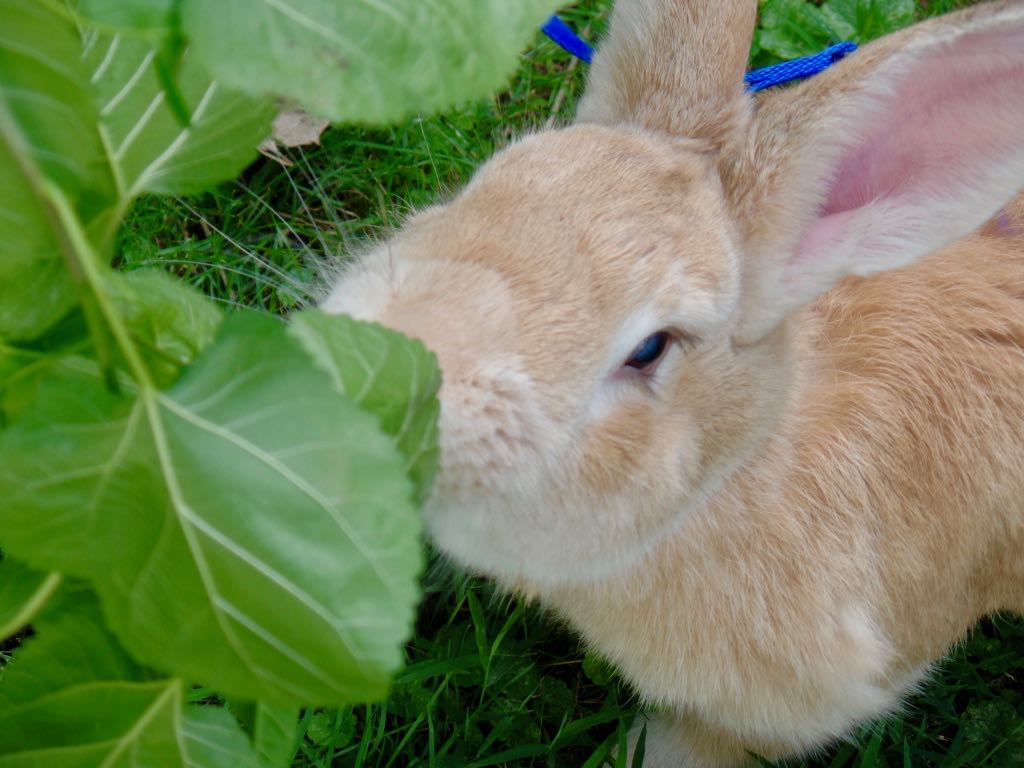 Hmm, thinks Sunshine. What is it? 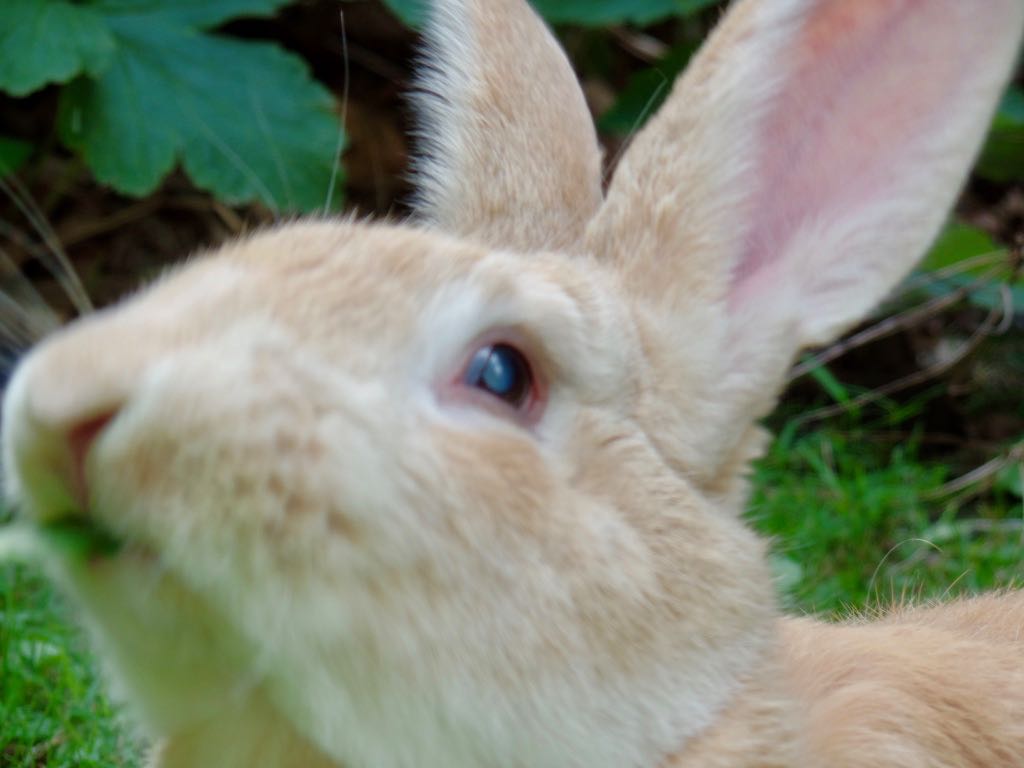 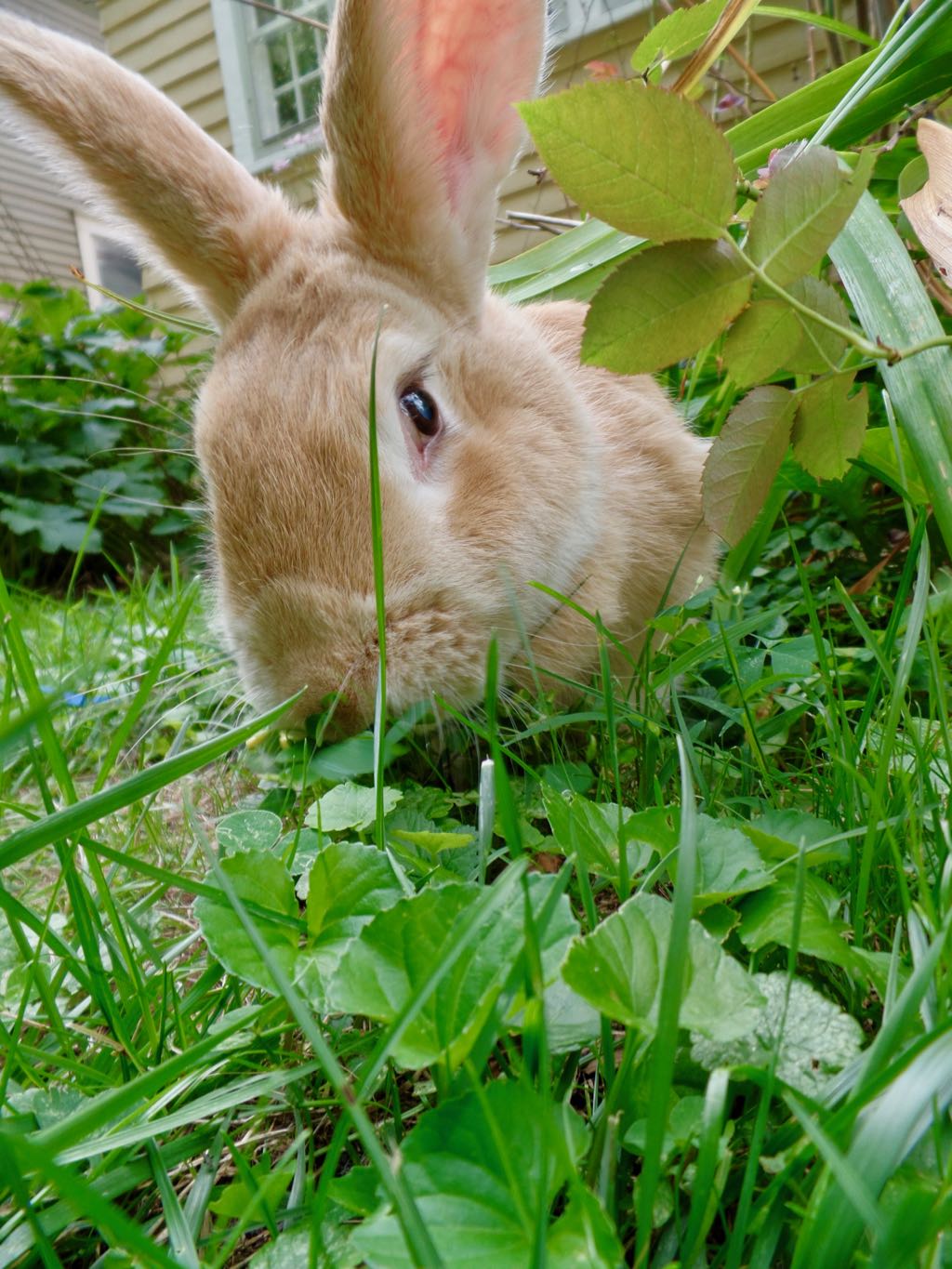 You get to really see how golden Sunshine's fur is in the sunlight like this. 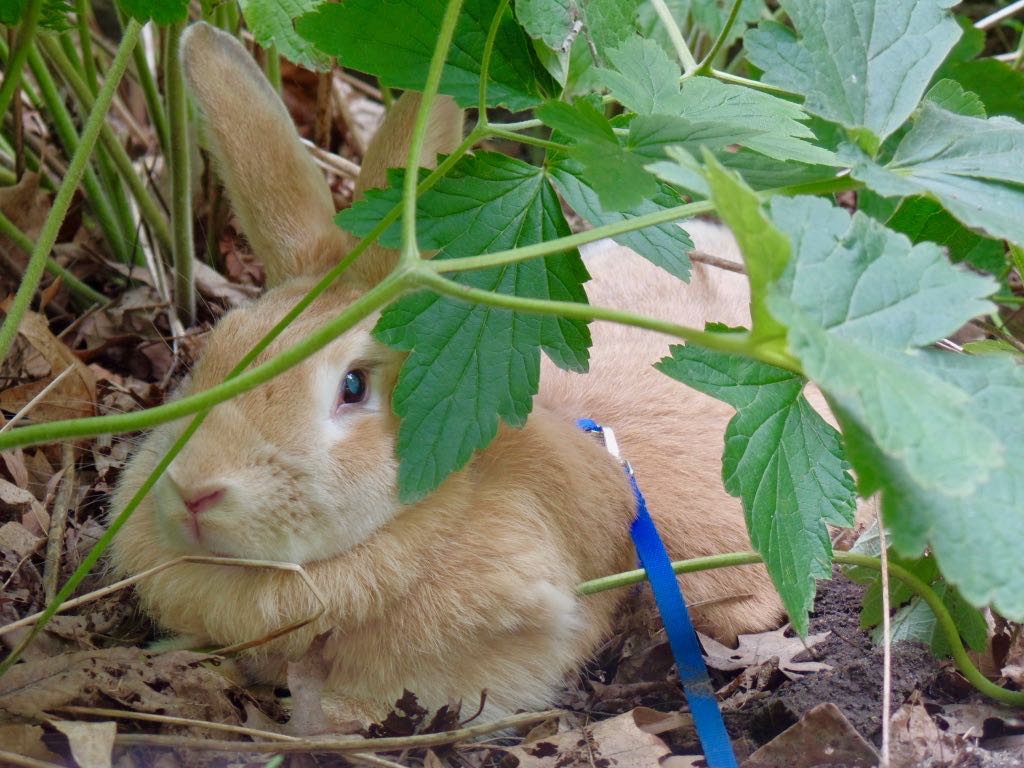 But she decides to sprawl out in the mud again. We probably should have waited for a day farther from the rain. 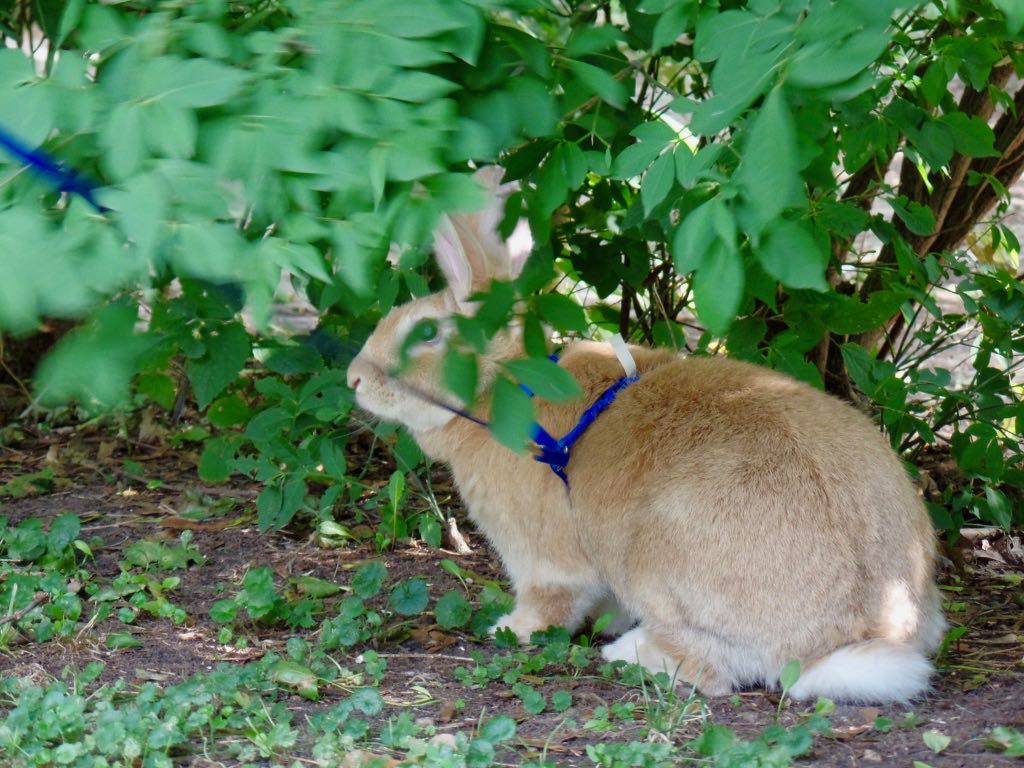 Now she goes over and examines the bushes, a new corner of slightly inaccessible space for her. 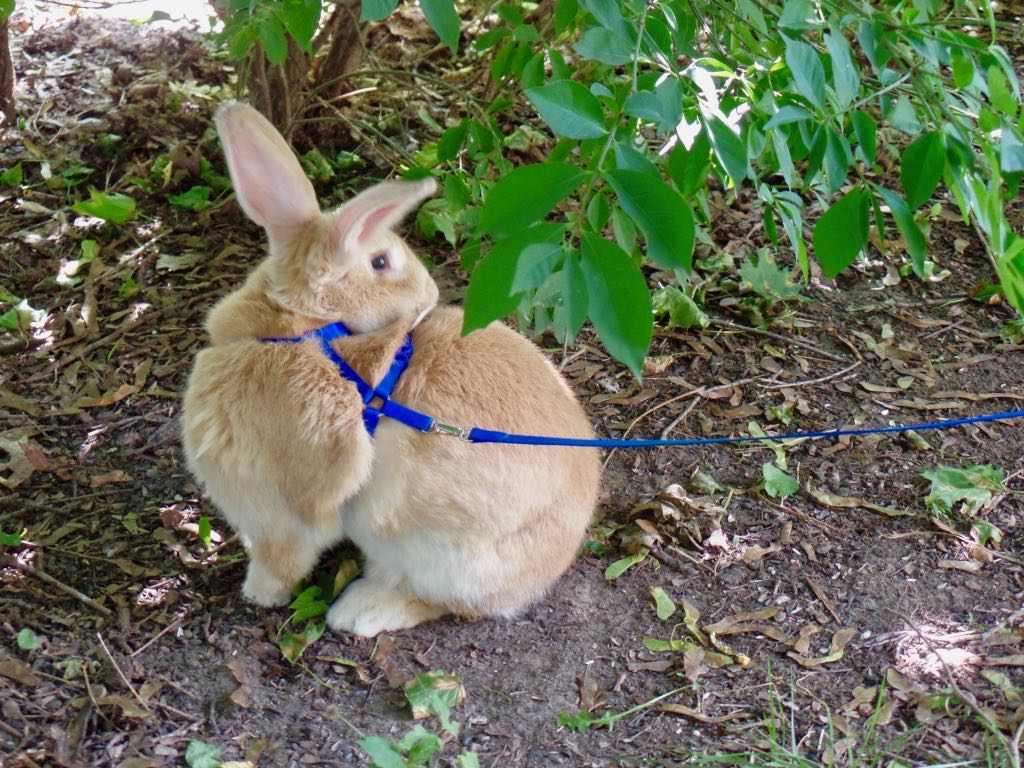 Sunshine takes a moment to groom herself and seems all right with finding she's got a harness, really. 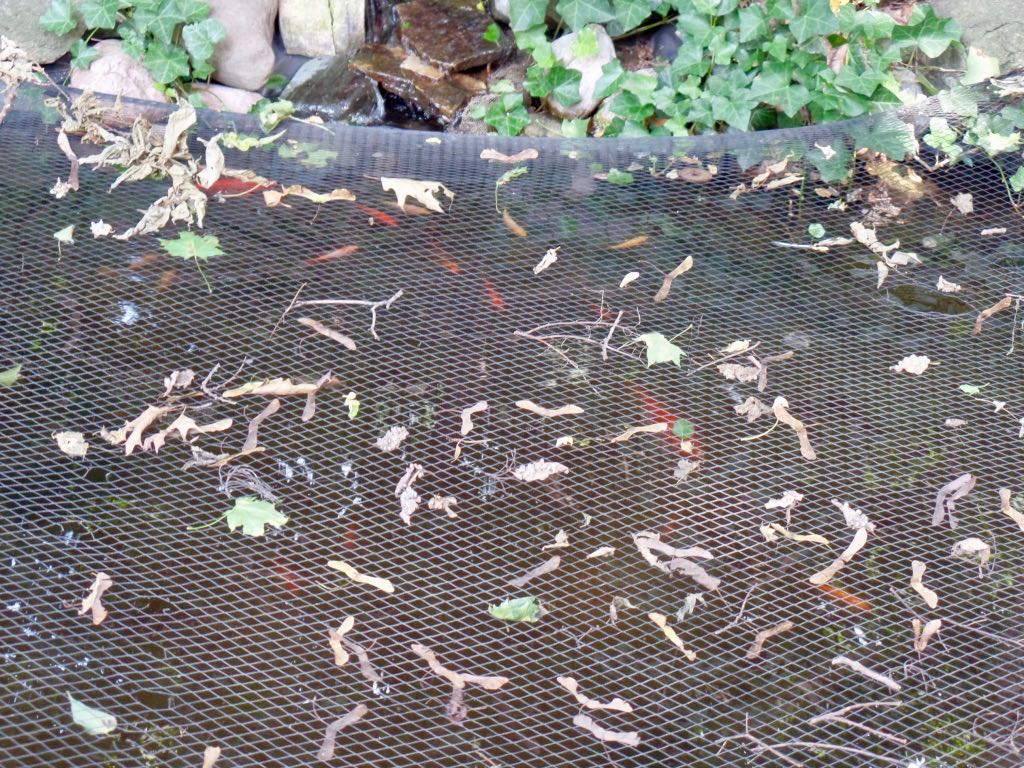 How about other wildlife? Here's our goldfish pond, netted so as to keep the fish safe from raccoons and other predators. You can see the small waterfall (it's about a one-foot drop) that aerates the water and so attracts the goldfish's interest. 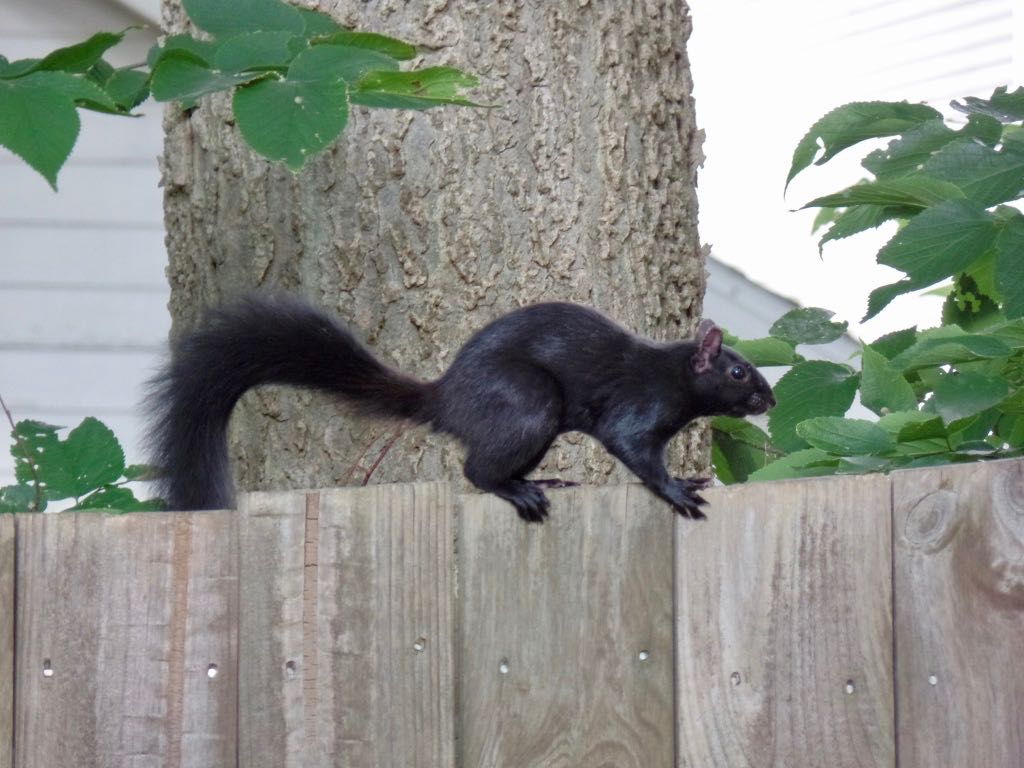 And here one of the neighborhood black squirrels wonders if you've noticed just how good he looks like that. 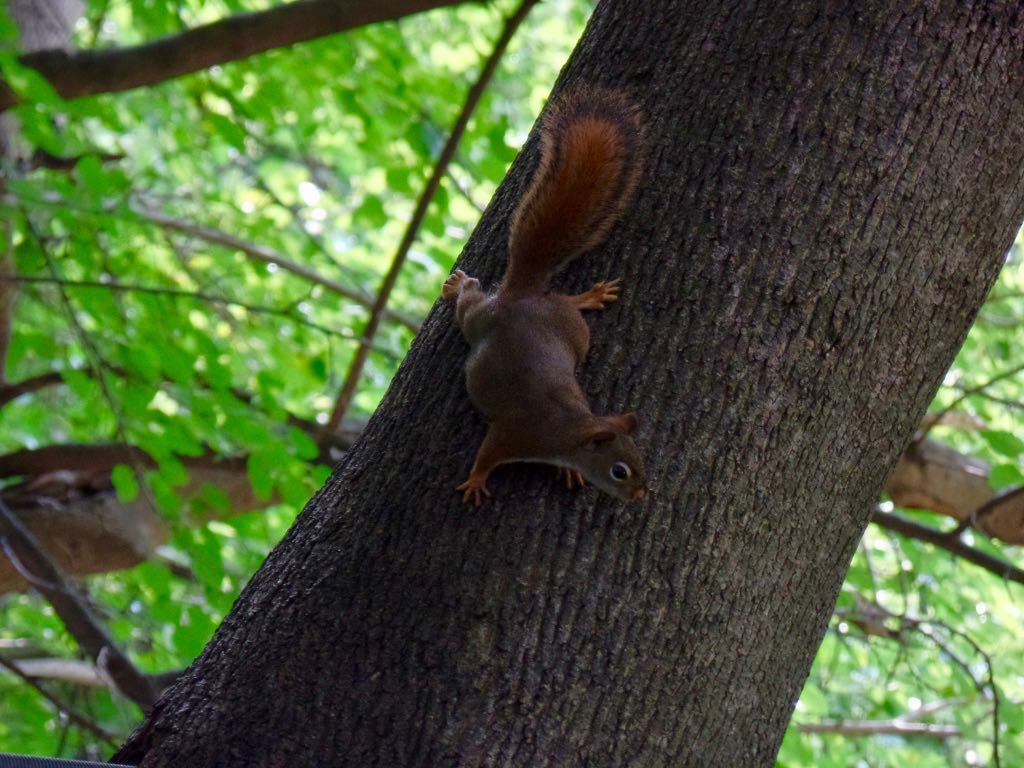 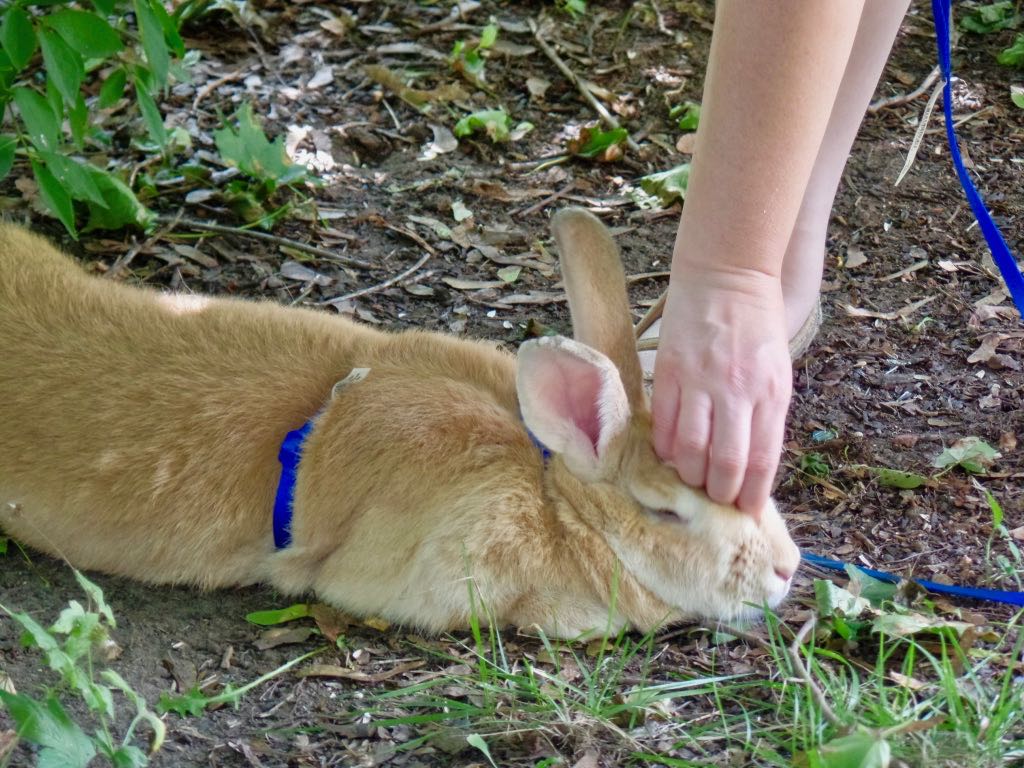 bunny_hugger gives Sunshine some head-pets so the rabbit can melt into the ground.

Trivia: At splashdown Apollo 13 had about 20 percent of its Command Module's battery power remaining. Source: Where No Man Has Gone Before: A History of NASA's Apollo Lunar Expeditions, William David Compton.

Currently Reading: Asimov's Science Fiction Magazine, January/February 2018, Editor Sheila Williams. Yeah so every now and then I pick up some of the science fiction magazines and then I never get around to reading them, which says a bundle of things about me.