So, first, let me finish off the pictures taken on the drive up to the Keweenaw Peninsula. It's not many; we did a lot of long stretches of driving and there's not much point taking many pictures of, like, a Holiday gas station.

As demanded by law, I attempt a panoramic view from the park at the northern tip of the lower peninsula. 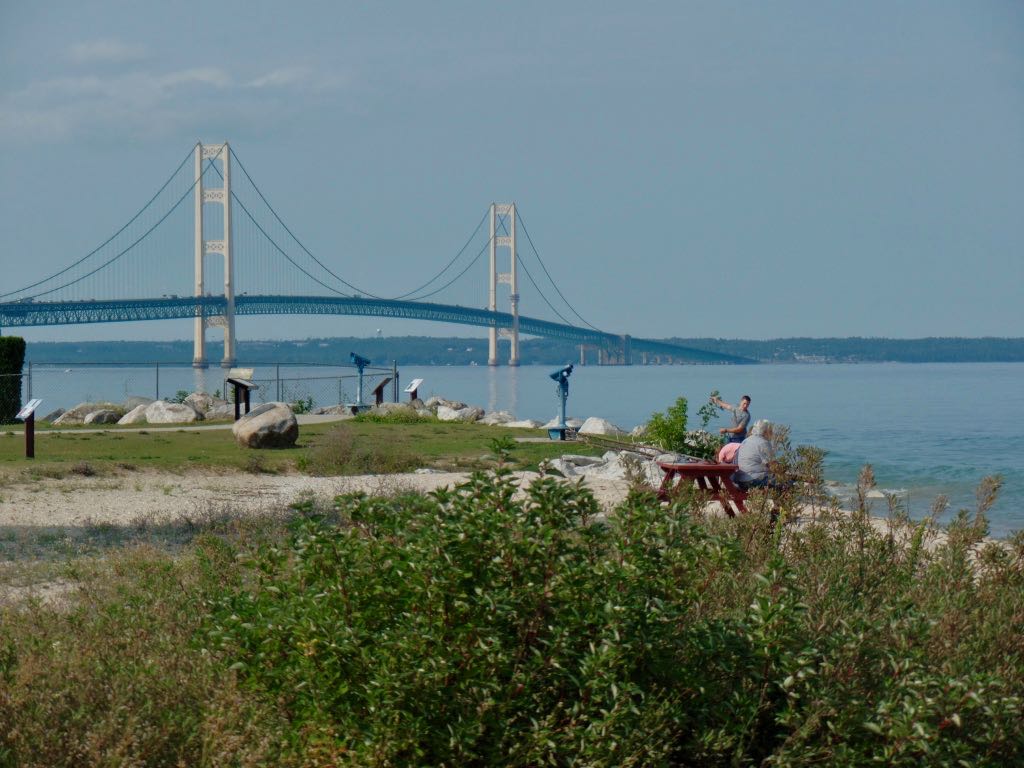 Completely different view of the bridge, and the pay telescopes and whatnot, as we get ready for the long and westerly part of the drive. 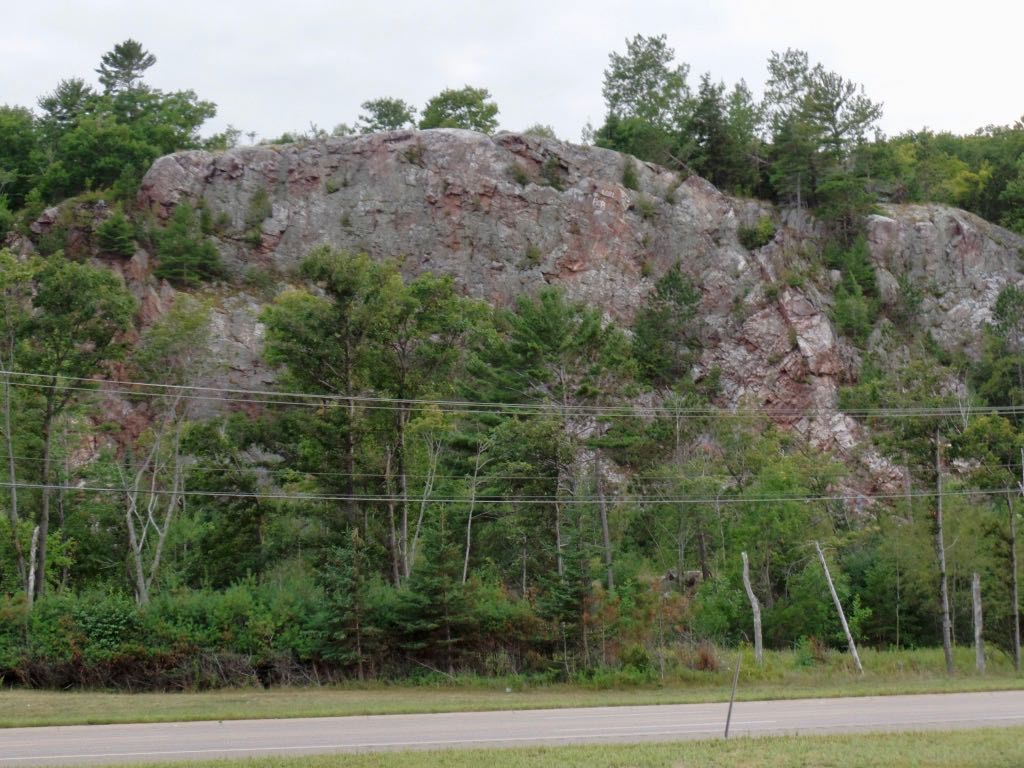 Rocks! Michigan's lower peninsula does not have many elevation changes --- geologically, it's a swap that 19th century farmers drained --- so getting into actually hilly terrain, as at this rest area in the upper peninsula, evokes the kinds of hills I'm used to from North Jersey. 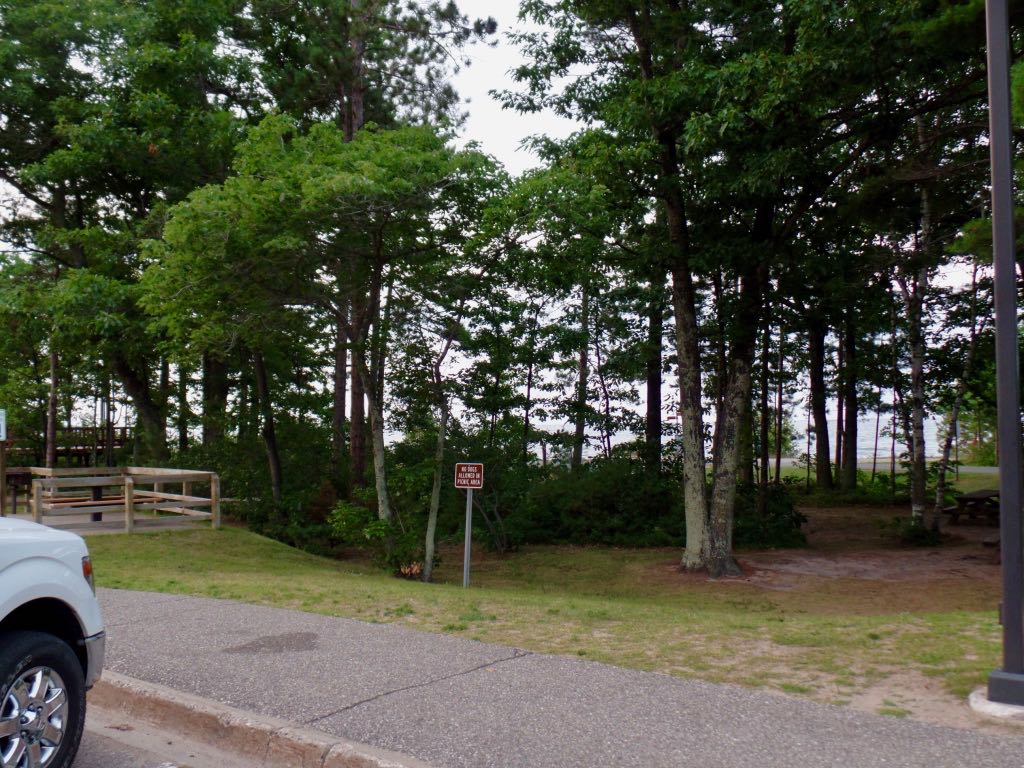 And here's a look out at the rest area, with Lake Superior just visible behind the trees.

And that was all our photo stops before we got to our AirBnB home. The next day we drove out toward Eagle Harbor, stopping first at, of course, a monastery. 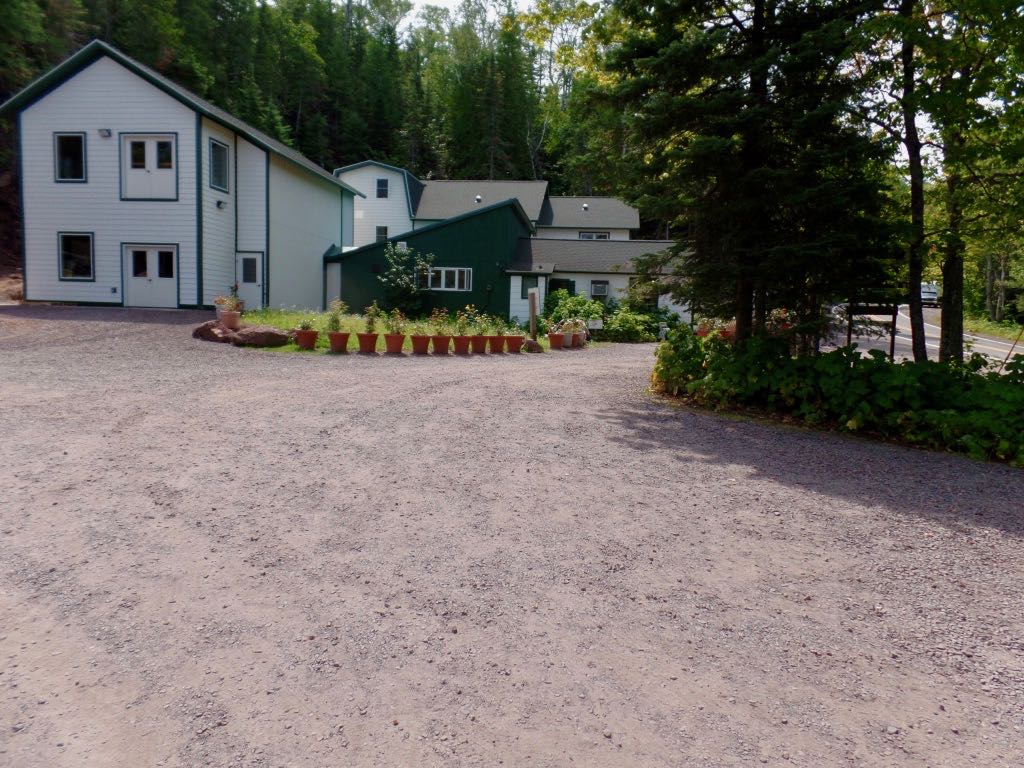 Parking lot and the side of the Jampot Bakery, plus other buildings attached to the Society of Saint John. It's a monastery that uses the fruits and flowers gathered to make jams and baked goods that support the place. 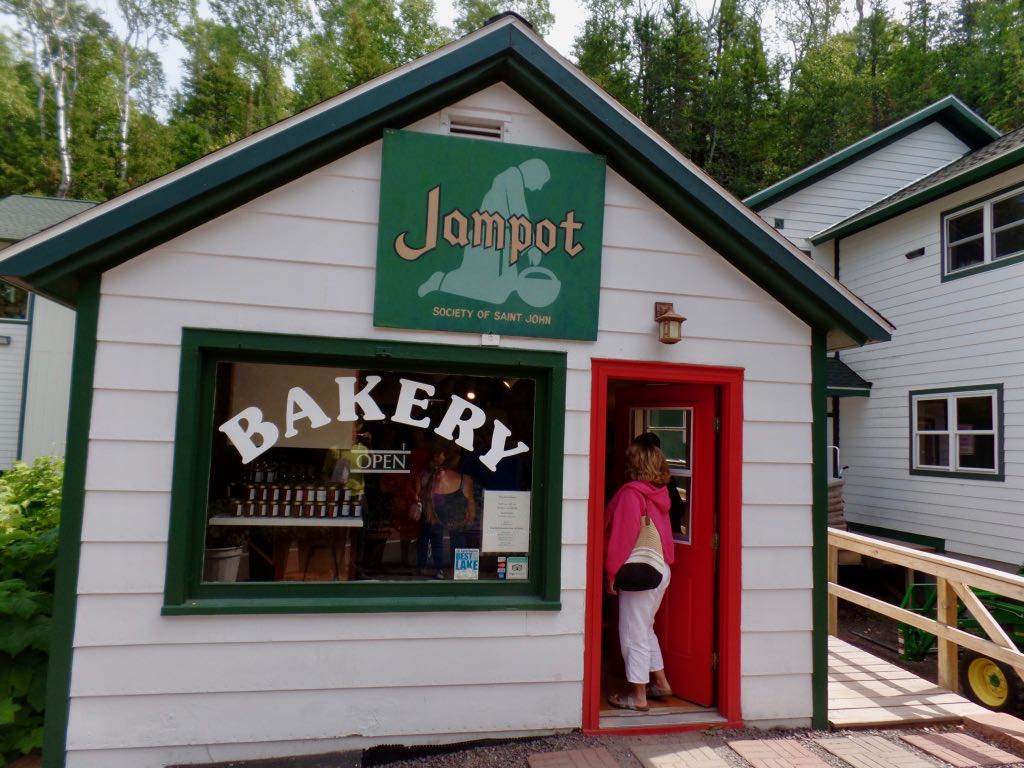 And here's the bakery, which has like 85 billion kinds of jam, some of which we were afraid to try. We also picked up some small breads that would be breakfast, things like that. 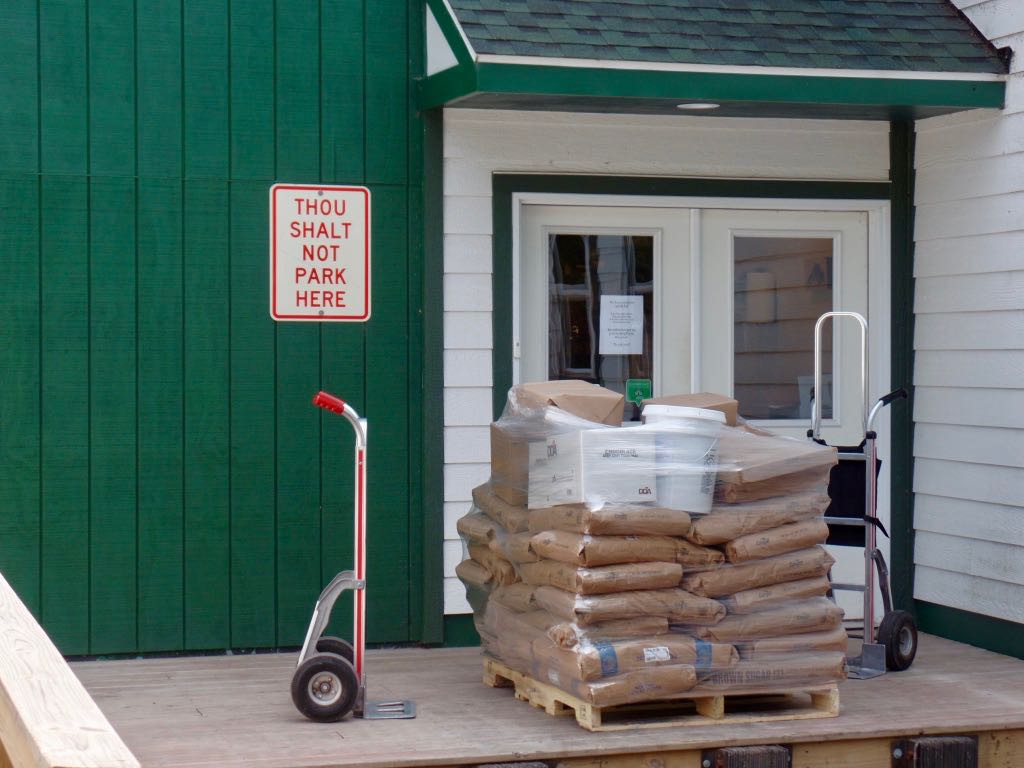 Just because they're monks who signed up with the Ukrainian Catholic church when they couldn't find a western bishopric willing to support them doesn't mean they can't have novelty parking signs. 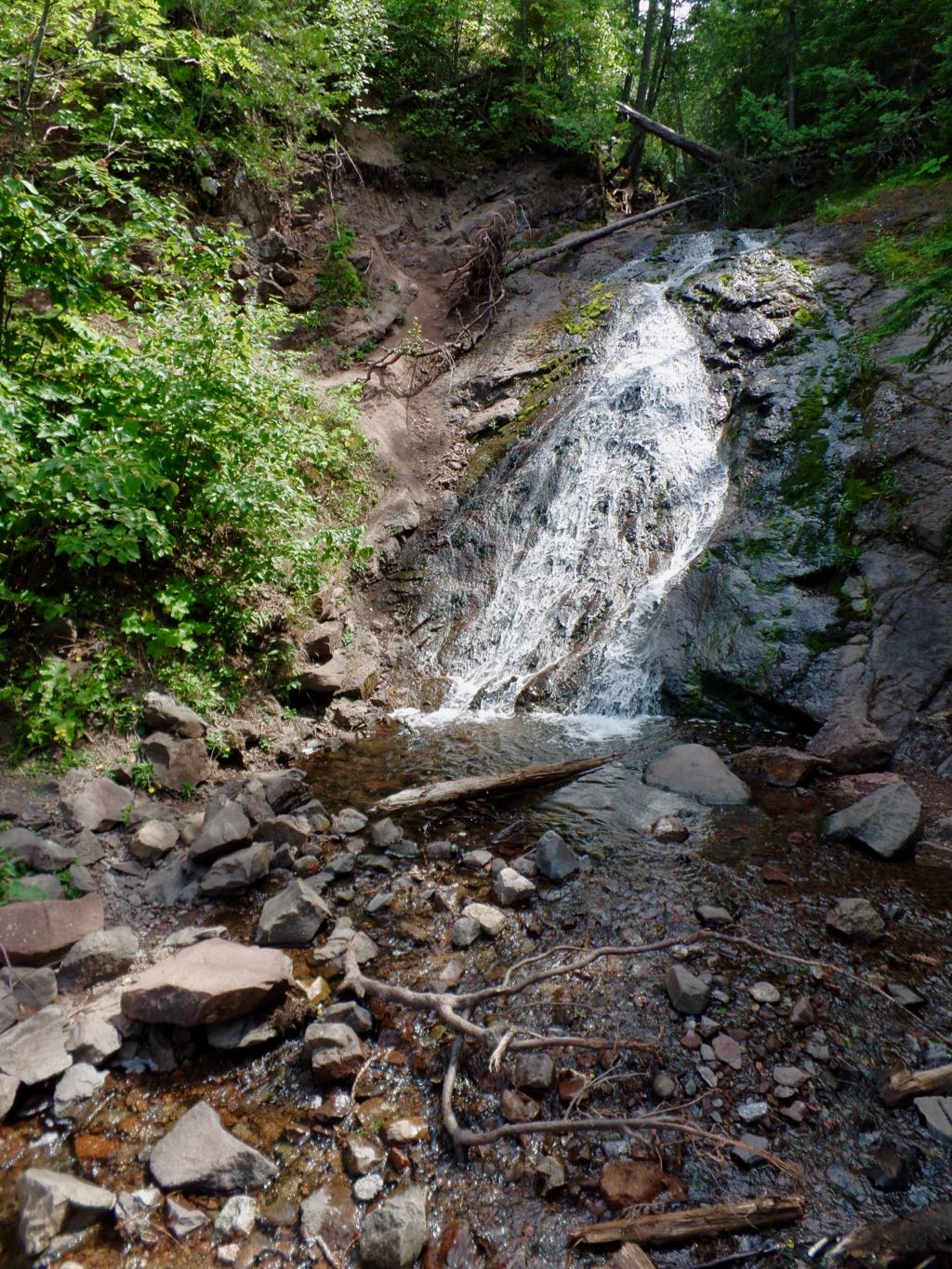 The Jampot is a short walk from Jacobs Falls, one of an estimated infinite number of falls in the upper peninsula. Here's a view of the lower part of the falls, visible without climbing through the woods. 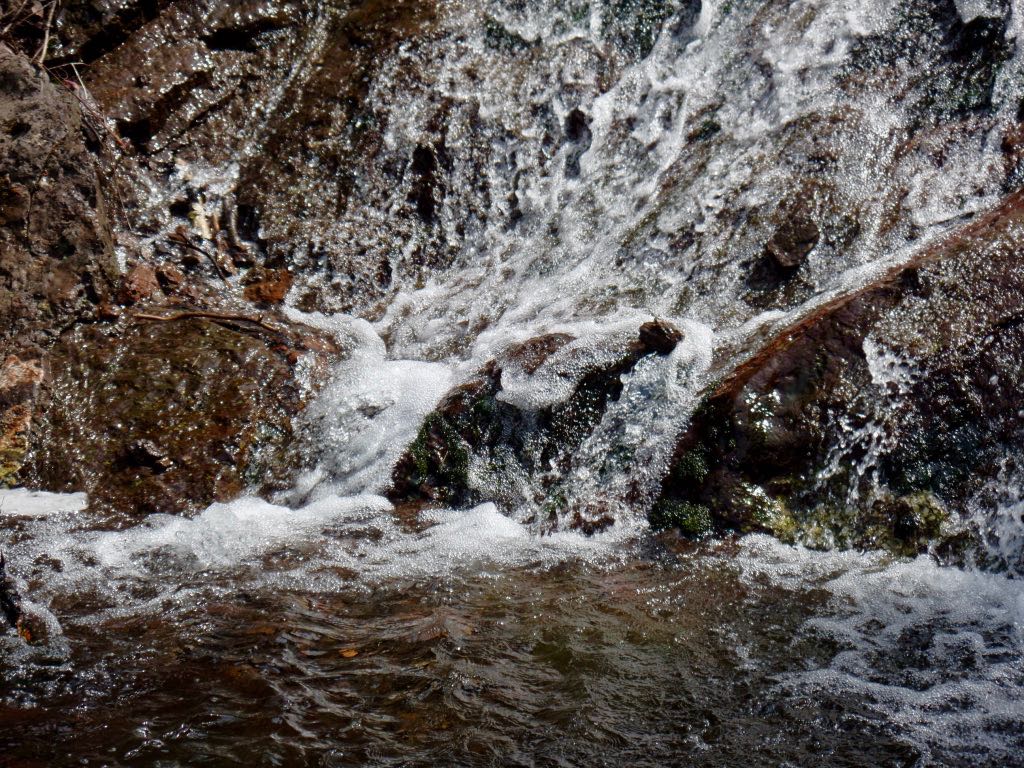 And here's a close-up on the waterfall, in case you want to re-enact the opening credits from Land of the Lost (1973). 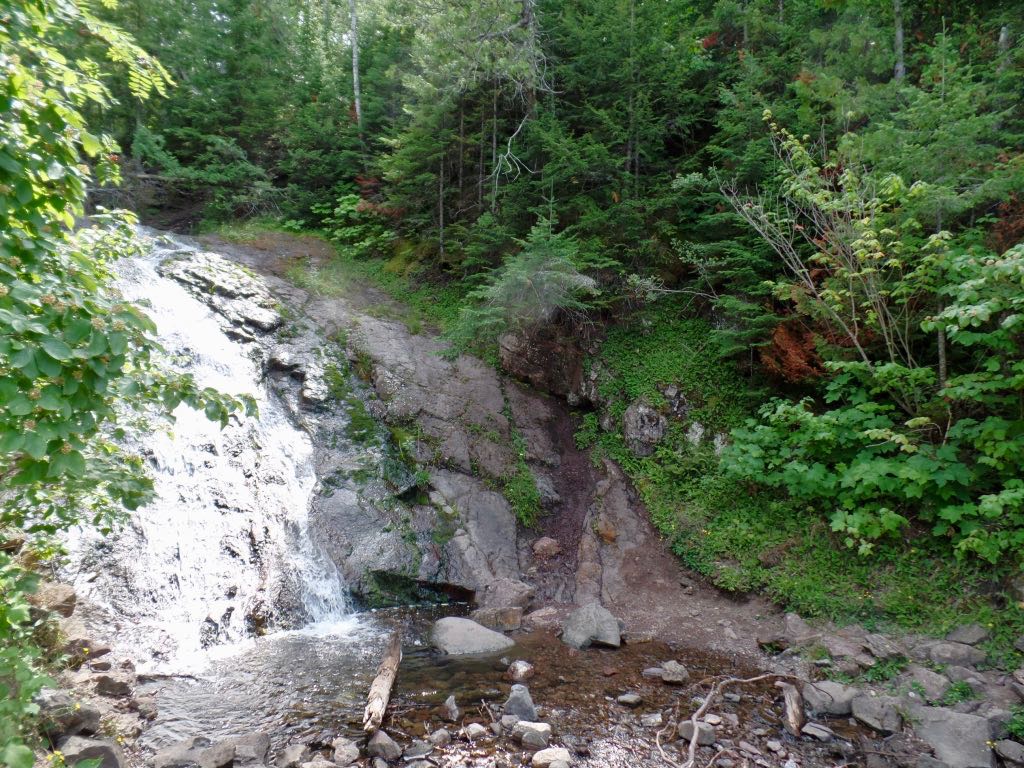 More of the waterfall, showing the woods around it. 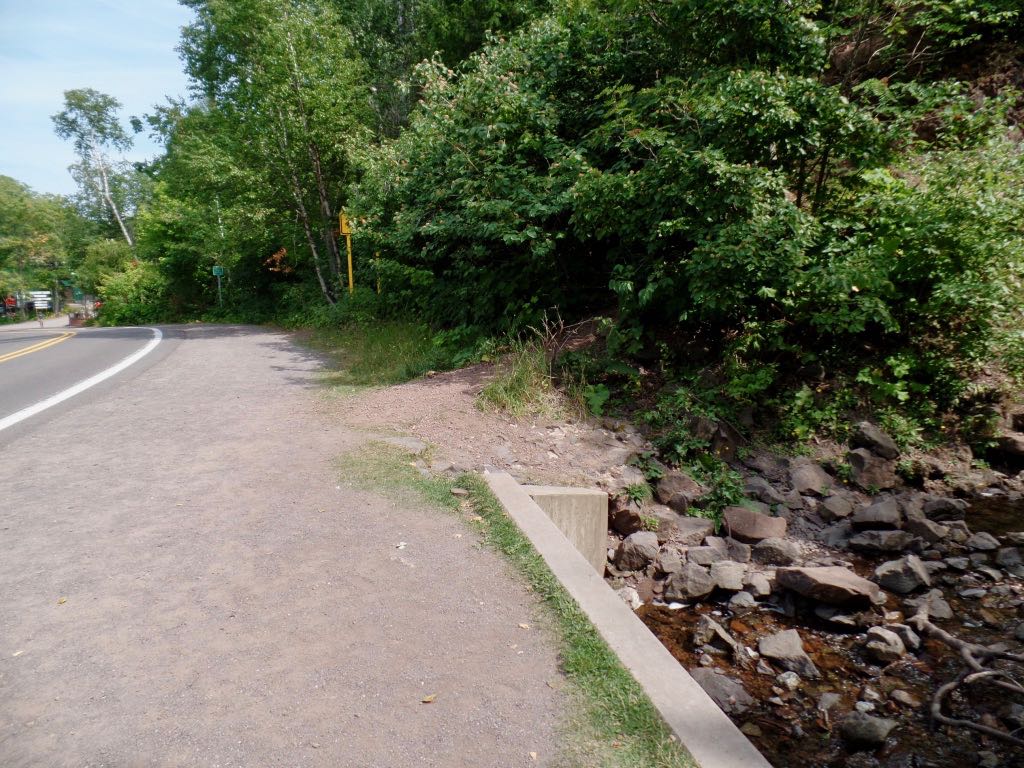 The waterfall, off to the right, isn't far off the Jampot (it was among the reasons they set up there rather than another space), which you can see off to the left there. 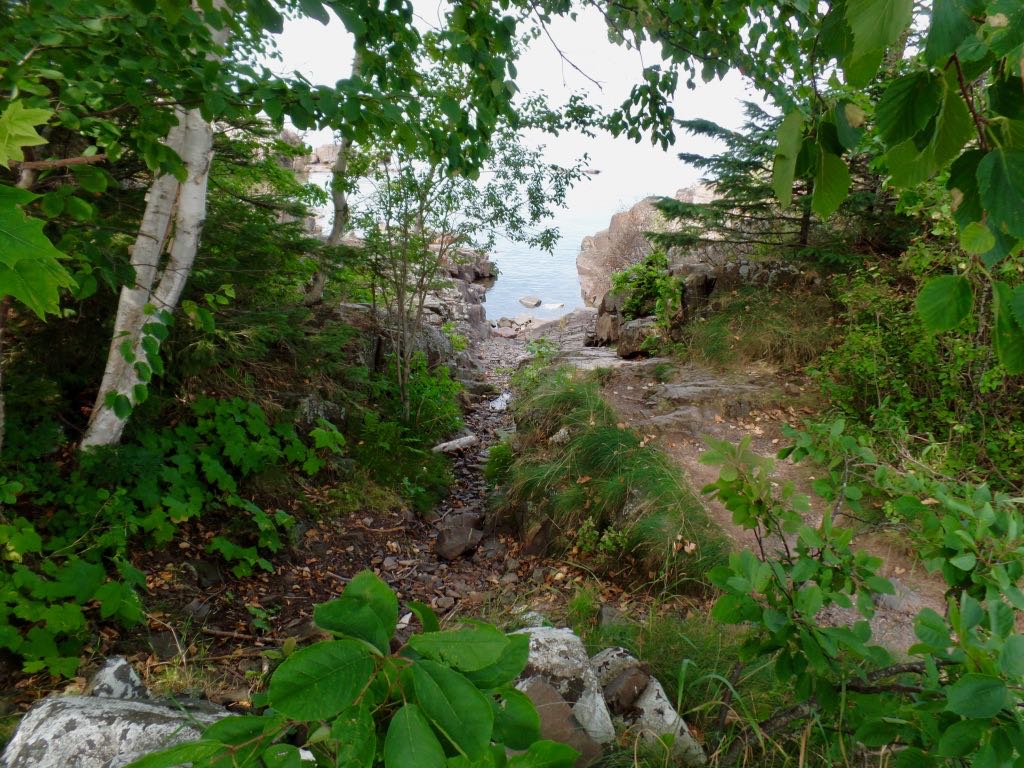 The waterfall runs underneath that little bridge and road and feeds through this creek into the Lake.

Trivia: Francis Hopkinson, who signed the Declaration of Independence for New Jersey, was a songwriter; his first song, ``My Days Have Been So Wondrous Free'' was published in 1759, and his first collection of psalm tunes published in 1763. Source: New Jersey From Colony To State, 1609 - 1789, Richard P McCormick.

Currently Reading: Superman: The Amazing Transformations of Jimmy Olsen, Editor Bob Joy. So I know part of this is brought on myself, by reading a collection of stories that all have the same theme, and that were originally published, oh, years apart and maybe after the editors would suppose that the readership had turned over. But reading a whole bunch in a row I can feel my brain trying to crawl out of my skull in the face of Jimmy Olsen figuring, heck, why not take a big ol' swig of this weird alien soda pop while Superman has to step out a minute, what could be weird about it THIS time, as opposed to the last twelve times? ... But it is also interesting that at the end of the book are a bunch of adventures that call back to Olsen's earlier ridiculous transformations.

And, yes, from the 30th century, the Legion of Super-Headgame-Players pokes in with antics that range from ``perplexingly weird but harmless'' to ``oh yeah, they're some kind of Lord of the Flies emotional-abuse circle''. It does drop the mention, as part of a prank making Olsen think that he was accidentally destroying alien cities and was involuntarily responsible for thousands, maybe millions, of deaths that in one month alone Jimmy Olsen buzzed his watch for Superman's help eighteen times, which sounds about right. It's all so genially dopey, though, that the one time someone actually gets killed by an outright villain it's jarring and out of character.

Still, Olsen gets some moments to shine. I think the best is one where he's got to escape a gauntlet of mobsters, all out to kill him, and the only resource he has is he swallowed enough chameleon powder to shapeshift his head and head alone. It's a dumb restriction, but if you commit to a dumb restriction, then it becomes smart.