bunny_hugger's father sent her an Easter card. A fancy one, since he's fond of that. He sent it the Monday before Easter. It didn't arrive. It should have arrived around Holy Thursday or Good Friday, a stretch when we didn't get any mail at all. Her father kept asking, eagerly, if it had gotten there yet, which just made her feel worse. She despaired of it ever arriving, and this set off some of those stupid quarantine-fueled arguments around here.

Finally, though, three weeks after it was sent, it ... still had not arrived, and I conceded that whatever the problems the post office was having, the card had been too long and it wasn't arriving. I am always optimistic about stuff finally working, but I have to draw a line somewhere. The card was unusually thick, as her father likes sending pop-up cards that are much thicker than normal, and I allowed that would slow things in any circumstance, and these circumstances more. But it shouldn't throw the mails too much to have a greeting card the thickness of, like, three greeting cards.

Today, the card came, with no explanation for the three extra weeks it spent in transit from a place an hour's drive away.

It's quite a nice card, too, featuring an intricate pop-up figure that unfolds into a rabbit holding a new-painted egg.

Up for more story comic plot recaps? I can tell you What's Going On In Alley Oop (Weekdays)? What's with the aliens at the pyramids? in the recap of February through April for the weekday continuity.

Now, though? Let's get down and into a copper mine that's been closed since World War II. (It had really closed in the early 30s, for the reasons you might expect, but the demands of the wartime economy and, I trust, cost-plus contracting made the mine briefly viable again.) 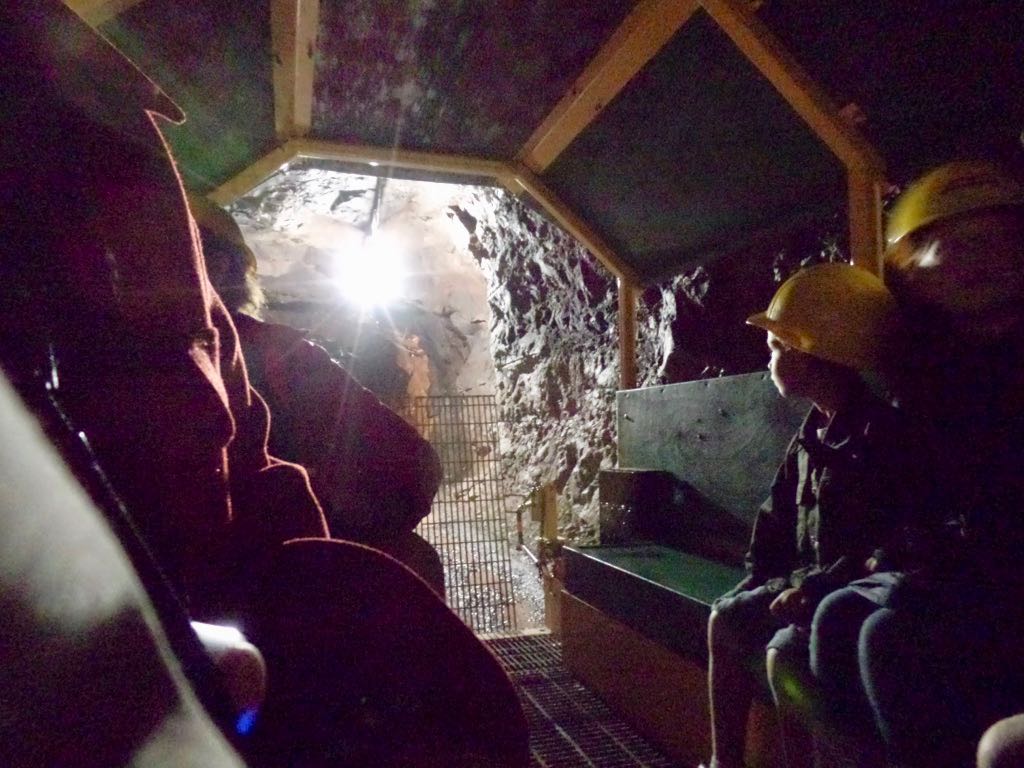 Riding the bus into the adit, a horizontal tunnel into the mine. When the mine was operating the tunnel was only something like five feet tall by three feet wide. Michigan Tech mining students in the 1970s expanded the tunnel as part of their mining studies. I am embarrassed that I didn't ask the obvious question: what grade did they get? 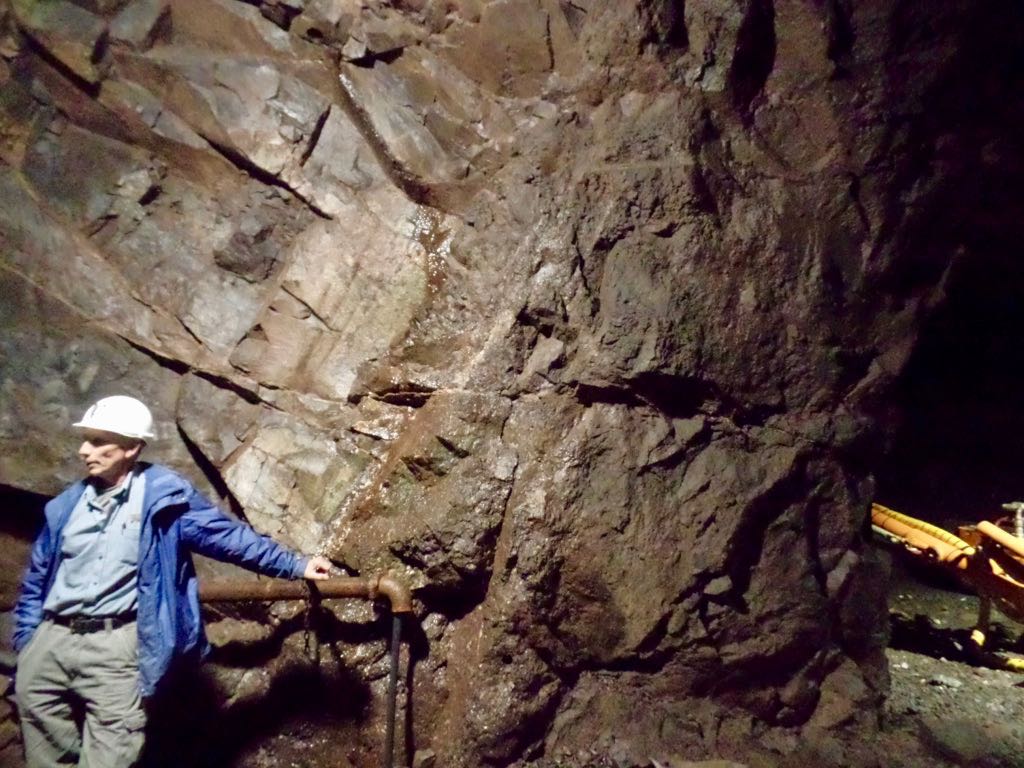 The docent for our tour. I have no knowledge of his name or past, but he had the air of the professor who always gets nominated for best-lecturer in the student newspaper's rate-my-professor survey, even considering he's not an easy A. My most challenging shot! And a piece of lore I had heard about for decades: inside the adit is a classroom that mining engineering students at Michigan Tech would sometimes use. It's no longer in use, and the bus did not stop for photos, but I was looking in the right direction and had a good enough shutter speed to catch a look at a decaying blackboard and some of the uncomfortable desks once used. 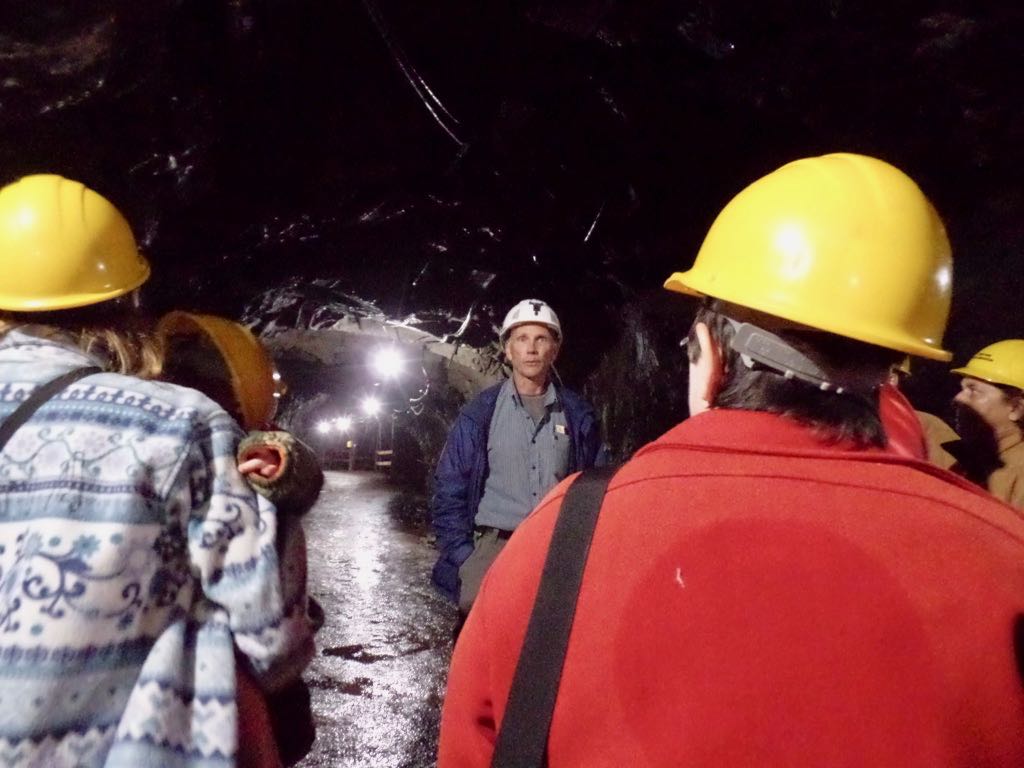 The thing about a cave is that it gets a lot of water, which is pretty impressive when you think that picture from the cog railway looking very far down on the river/canal. Anyway just look at how damp the ground is. 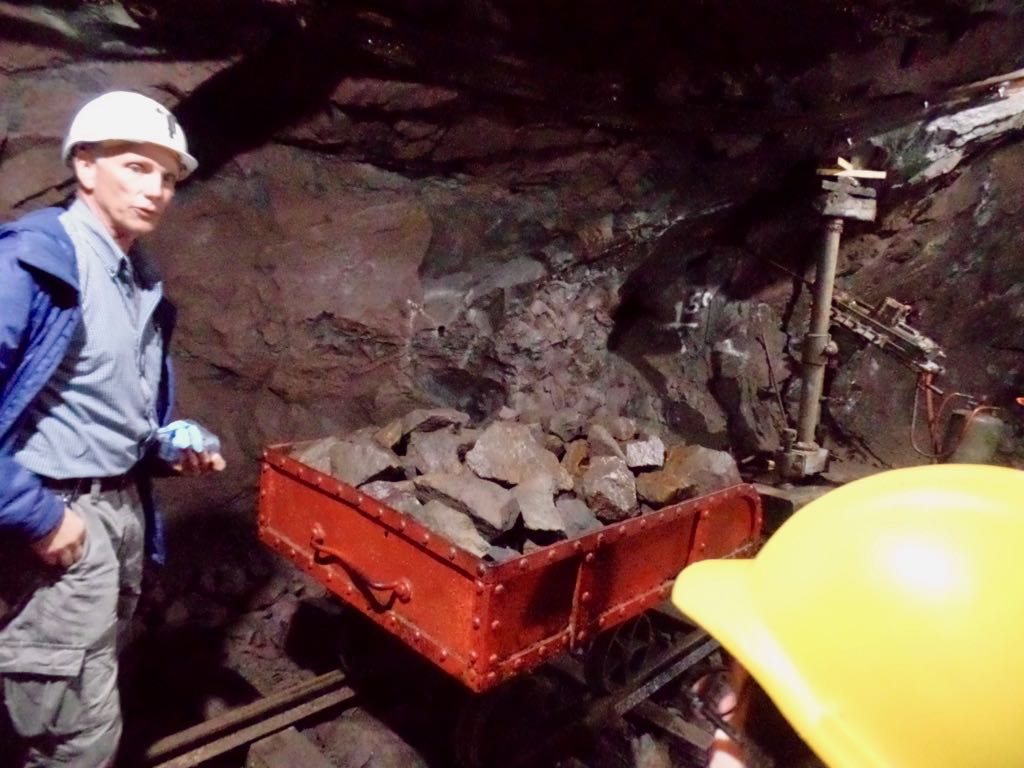 Showing off some of the old mining equipment here. In the background on the right is one of the drills which made for a great improvement all around in getting rocks out of other rocks. 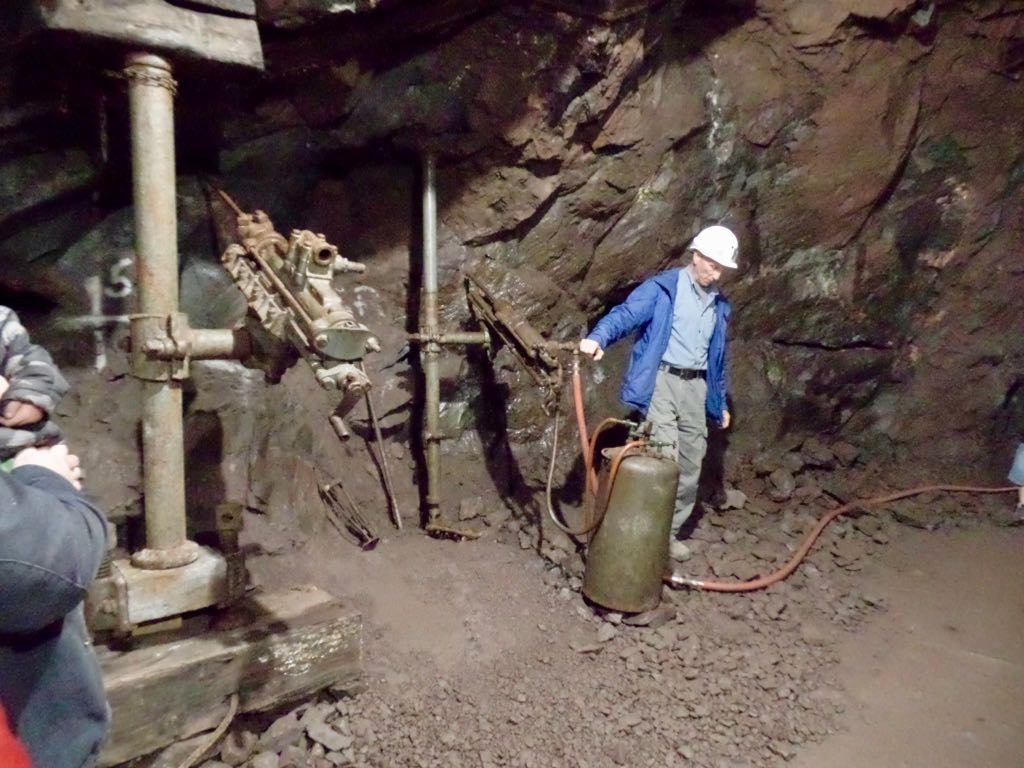 To the right of that drill, the docent shows off a hydraulic power drill that, if I remember right, was one of the factors that lead to the massive 1913 strike. 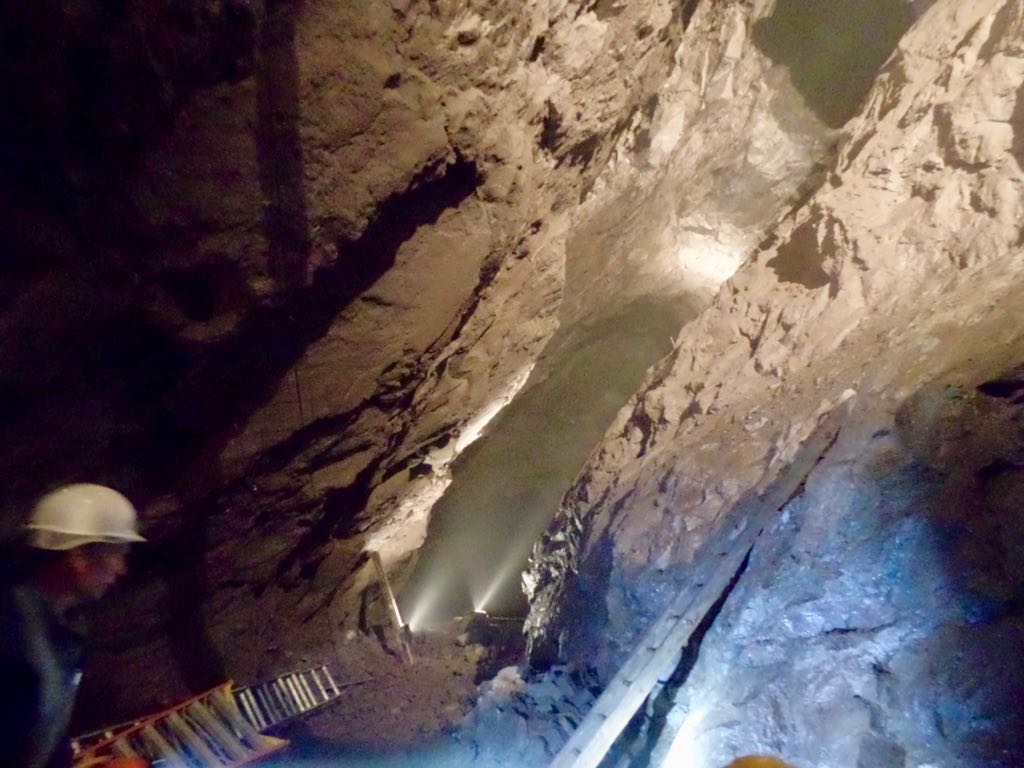 The vein of copper ore dropped off at an angle of fifty-something degrees relative to the horizon. All that open space was, two hundred years ago, copper-bearing ore. 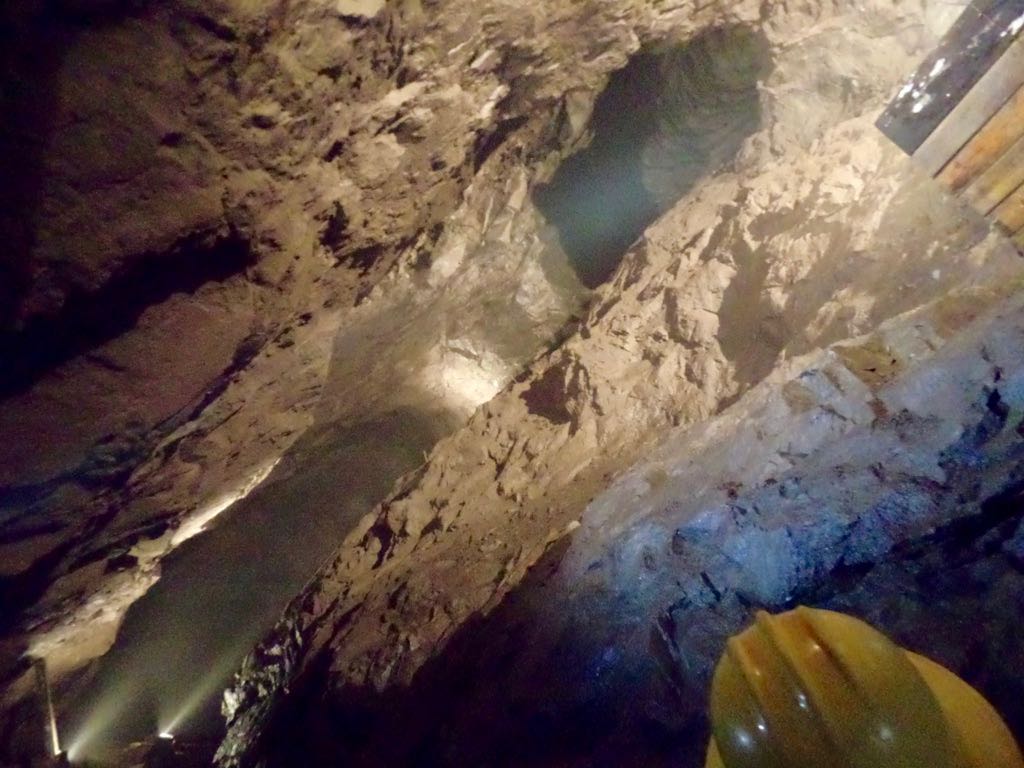 And it goes up and up and up. In the highest parts, the first ones mined, you can --- at least in person --- make out the traces of pickaxes and the parts of rock dug by hand. Around here the docent fielded the question from someone who wanted to know if it was true they were going to put the state capital in Calumet, the nearby town. The guy didn't even get through the question before the docent shut it down. There was never any prospect of the Michigan capital being in a tiny town with unbearable winters, especially given that statehood came forty years before anyone knew there was ore worth mining. 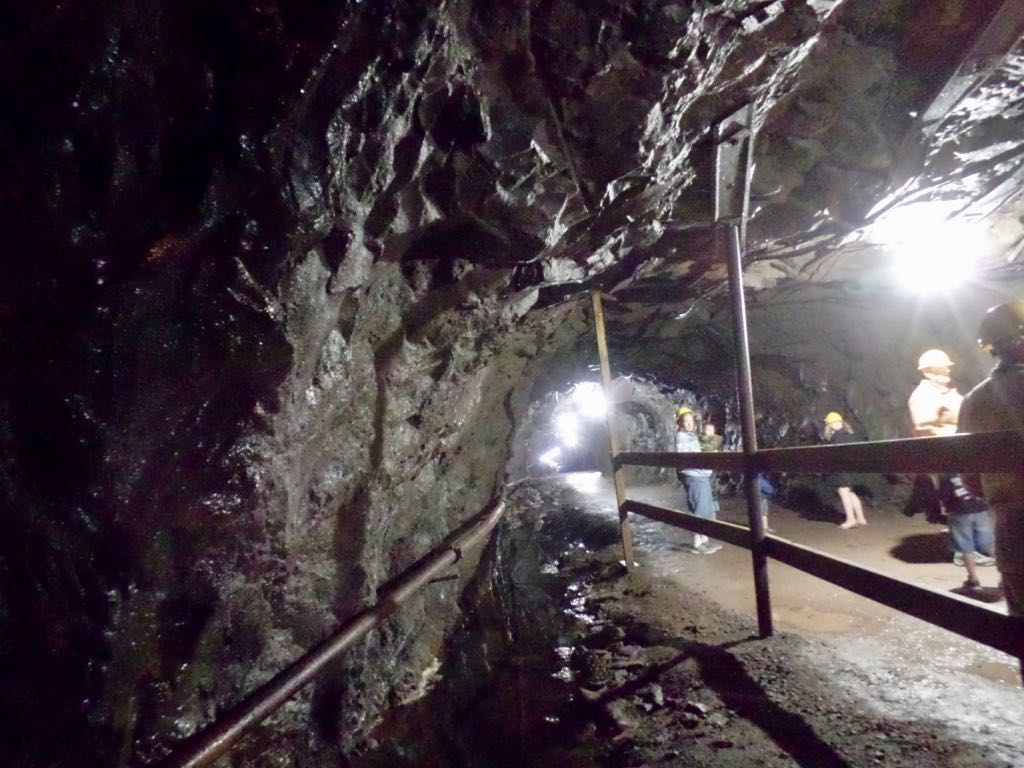 More caves, and more water; what looks like a precipitous fall in the center bottom there is reflections in the dark. Which is quite dark, by the way; the docent did take a moment to turn off the lights so we could experience an amazing amount of darkness, and quiet apart from water droplets falling. 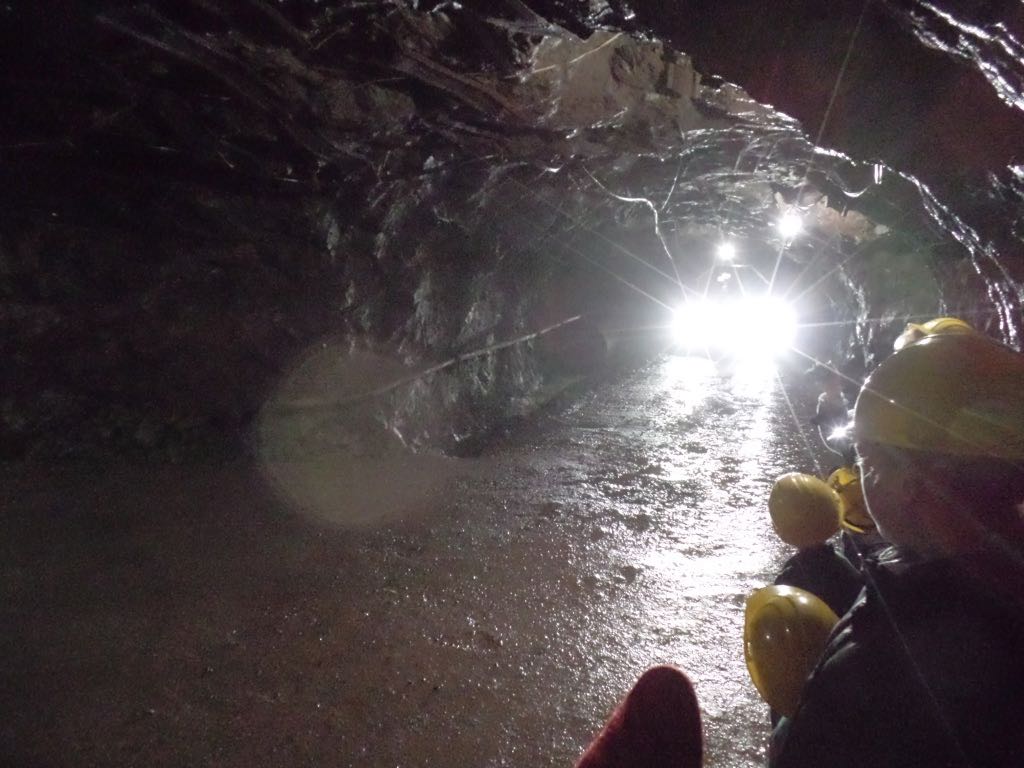 We get out of the way for the other tour's bus to come along. 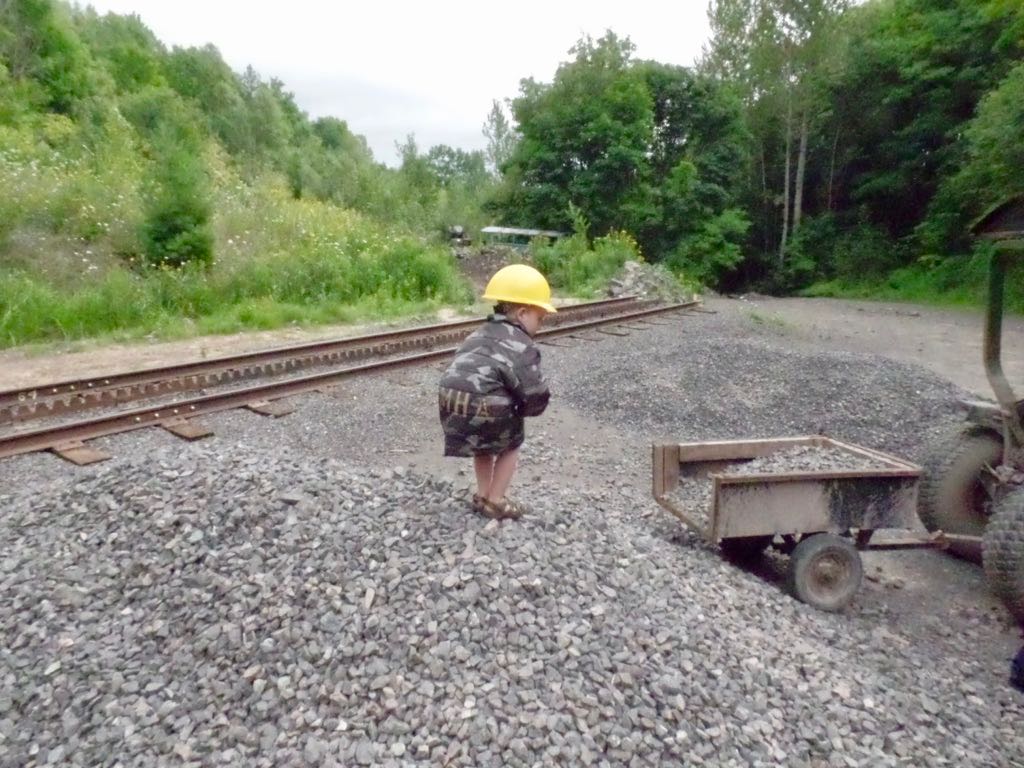 Back out again! ... That's either a kid or a heck of a perspective trick. 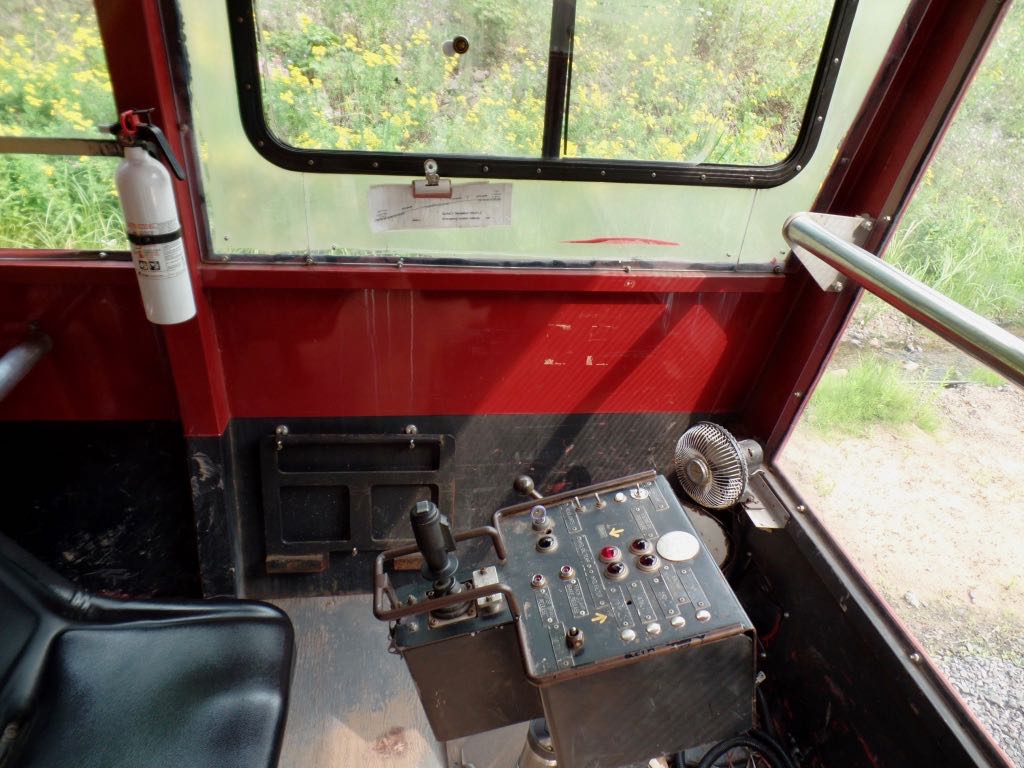 Looking at the controls of the cog railway, as we get ready to return up the hill. 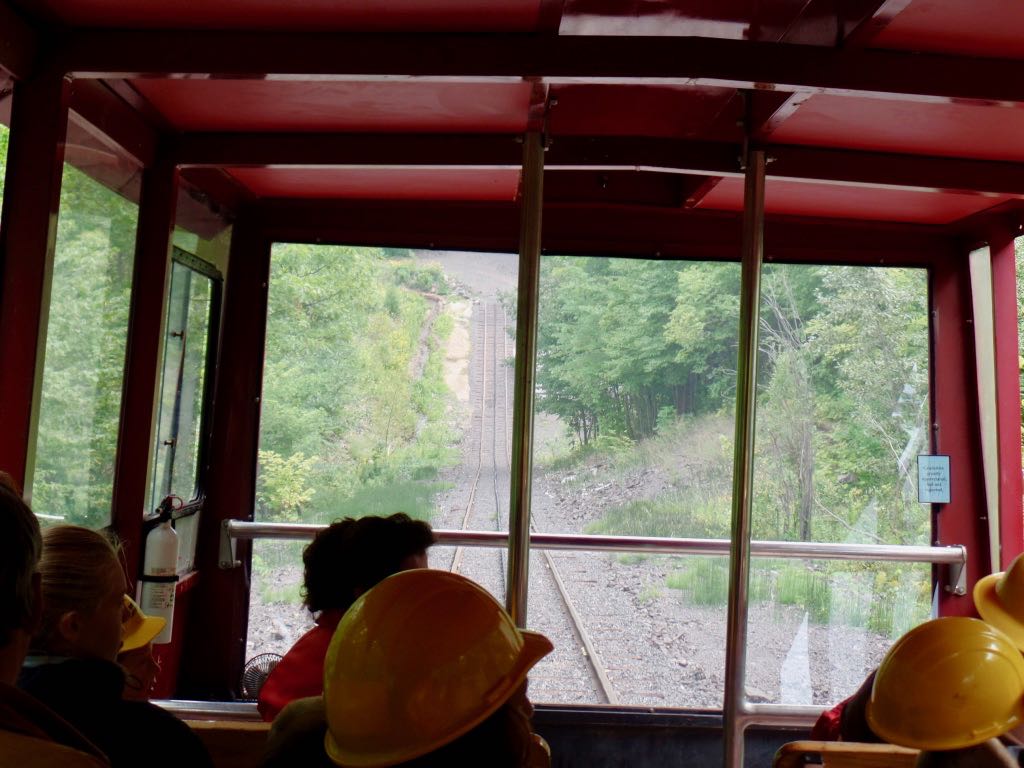 The train just backs its way up, so we get another view of looking, compared to our seats, up at the ground. 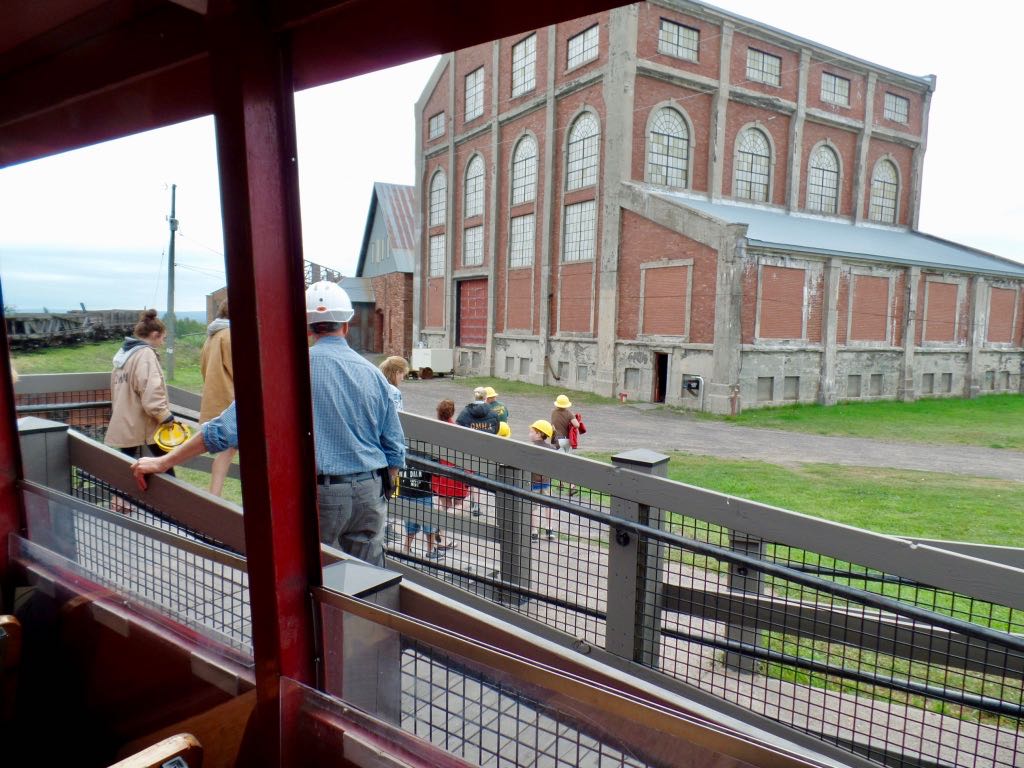 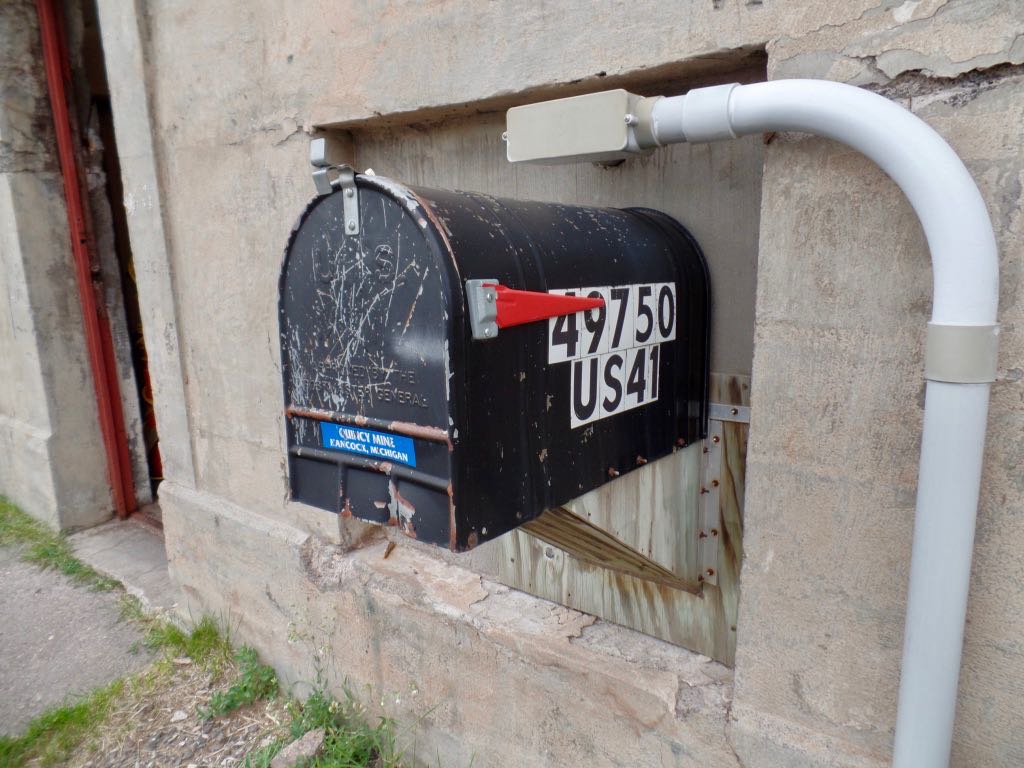 The mailbox! Which is this little thing in the back of the hoist house and I'm delighted that they have it there. Also that they have the little flag for the mail yet. 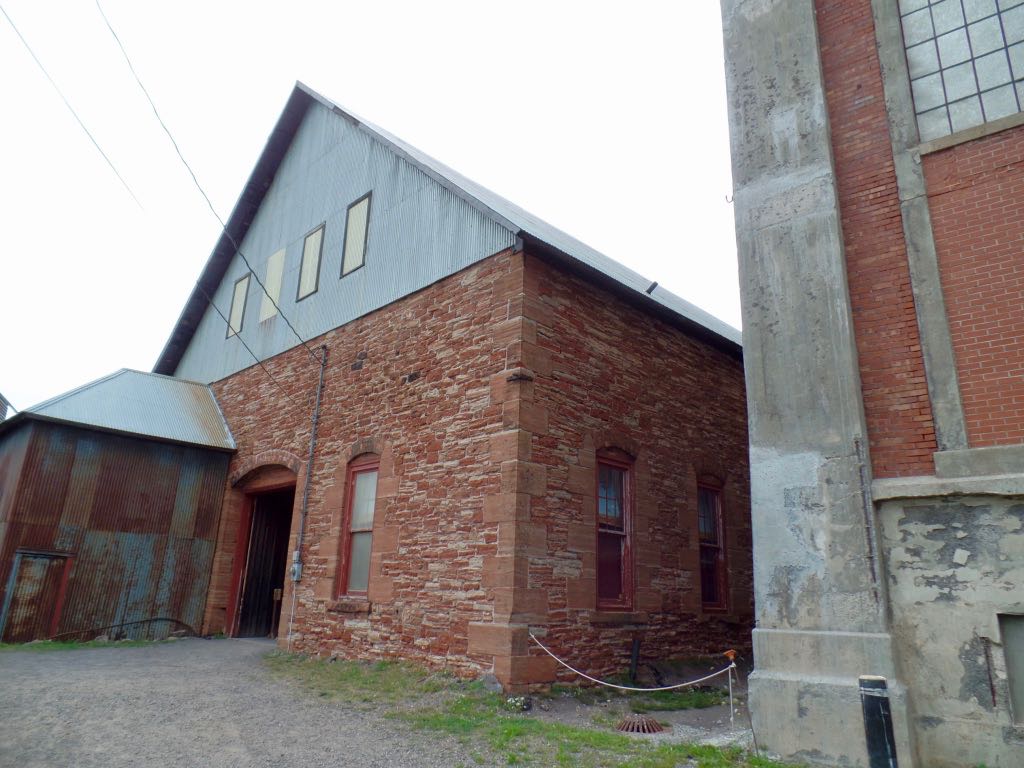 The end of the hoist house and the start of an adjacent building that was roped off, its purpose, a mystery to us.