If things were different, then Cedar Point would have opened at 10 am today, the 9th. We wouldn't have been there, most likely, but we might have made an early-season visit. It's their sesquicentennial, and they had a bunch of renovations planned and the new Town Hall Museum and a nighttime parade show and all.

They announced on Friday that the sesquicentennial celebrations would be observed in 2021. They hope to open for the season at all, but they're postponing all their special events into 2021 also. That is ... a heck of a thing to consider.

Michigan's Adventure did not have archive.org save its planned schedule, but based on last year's, their opening weekend would have been the 23rd of May, after a little five-hour school-tour day on the 20th. We had resolved to get to Michigan's Adventure as close to the start of the season as possible, since we're always annoyed that we didn't get there more in the early summer when the riding is easy, and have had years that the only time we visited was closing weekend. Our resolve to get there as near as convenient to the start of the season remains, but the season might have snuck out from under us.

Now exploring more of the stamp sand beach in Gay, Michigan, from our August 2018 trip there. 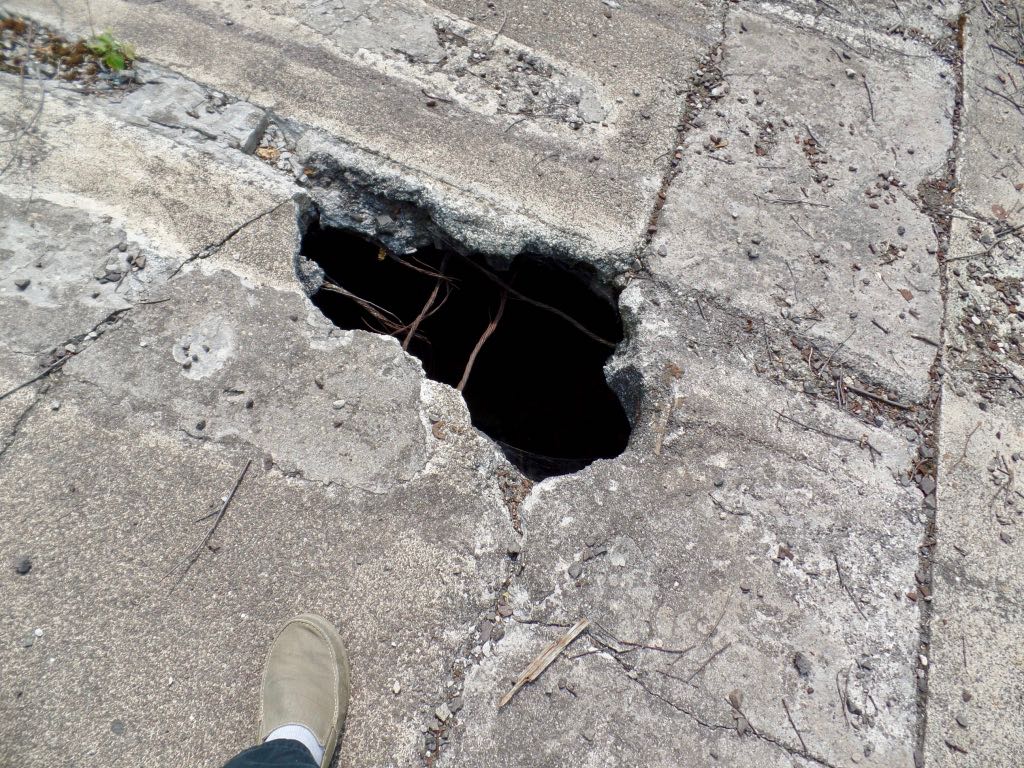 The sort of thing to expect around here: the decaying factory floor, with odd-shaped holes and exposed rebar. I didn't actually grow up someplace where this kind of thing was common, but it's my Gen X heritage to claim we were told to go off and play places like this and only come home if we fell in a pit and had actual blood coming out, so it felt very home-like. 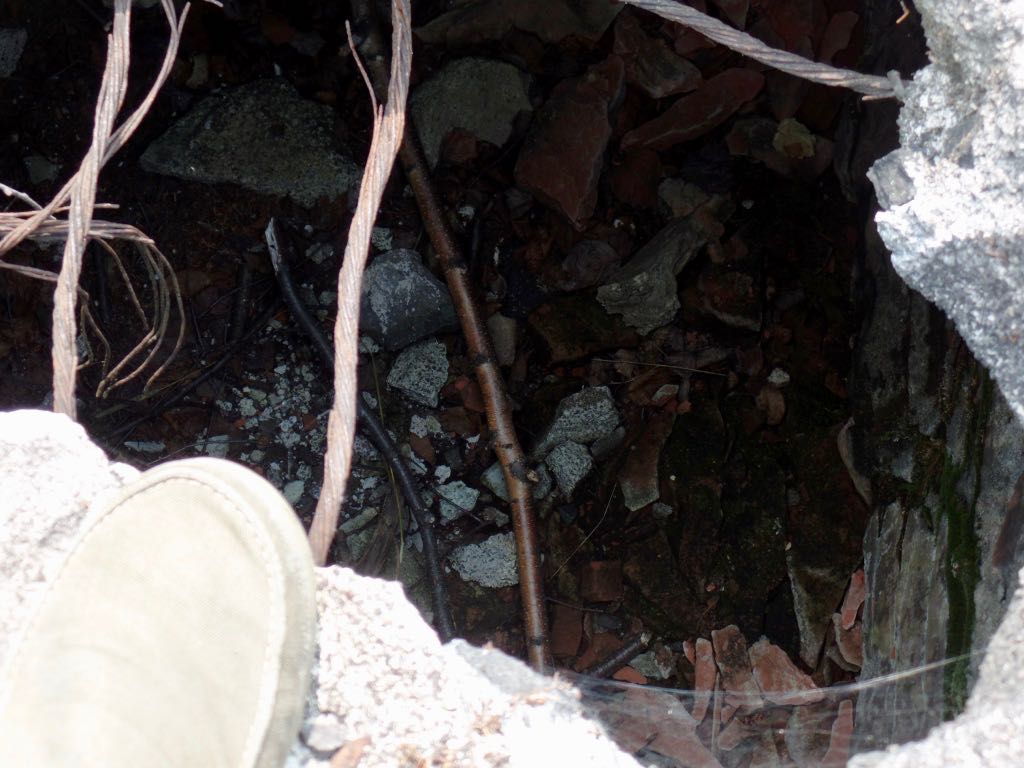 There we go, that's the sort of cozy thing inside that hole. That's my foot in the lower left to give you some size comparison, in case you know how big my feet are. 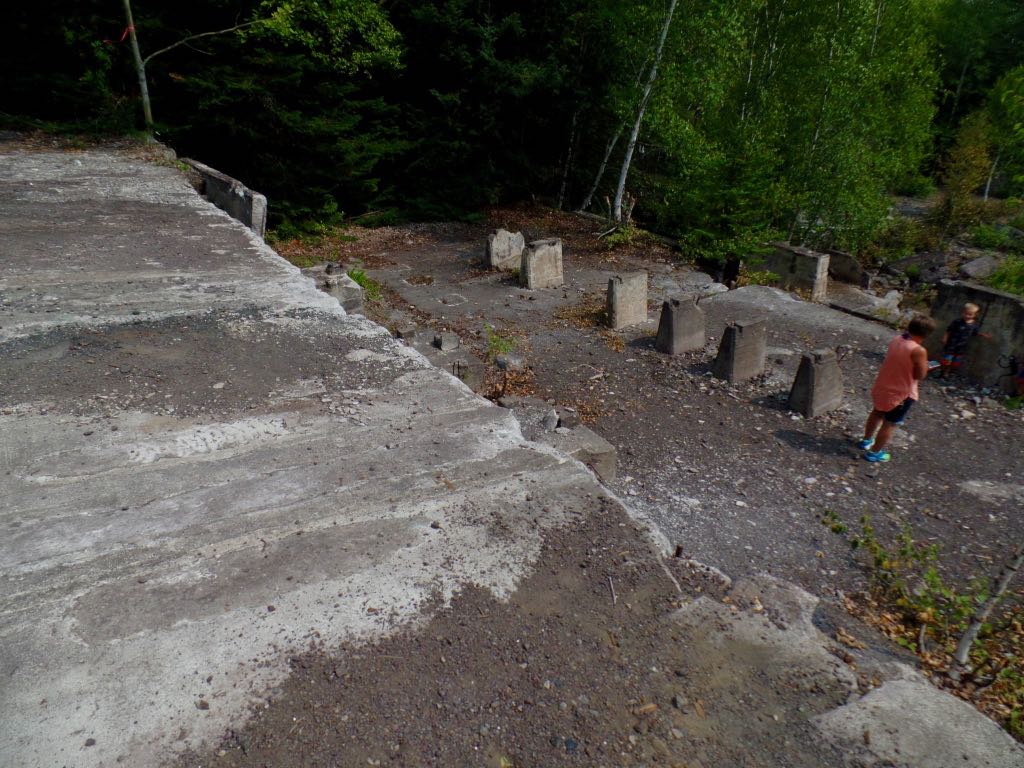 What's left of the factory is several concrete floors at different levels. While we were there, there were these kids accompanied by an older woman (grandmother? Elder aunt? Something like that) telling them of when she was a kid prowling over these ruins like that, which was fun to catch snippets of. 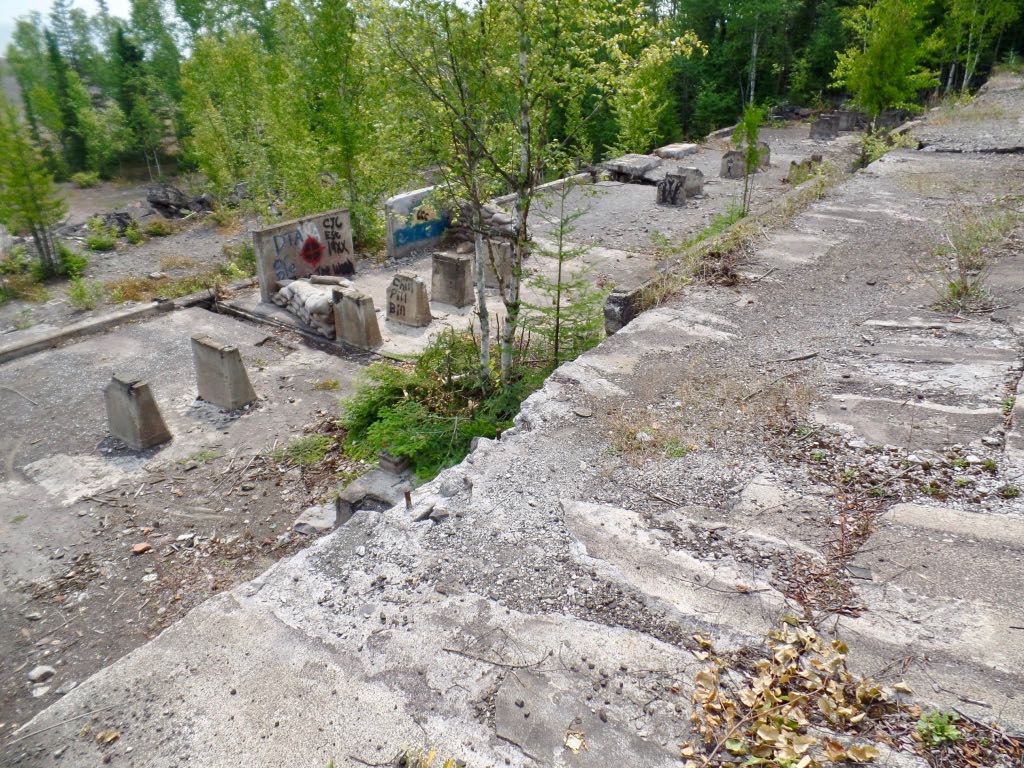 More of the level between what must have been different floors of the factory. There's almost no hints what anything was. There are steps between these different levels, so you're not forced to take your life in your hands getting around. It's totally your choice to. 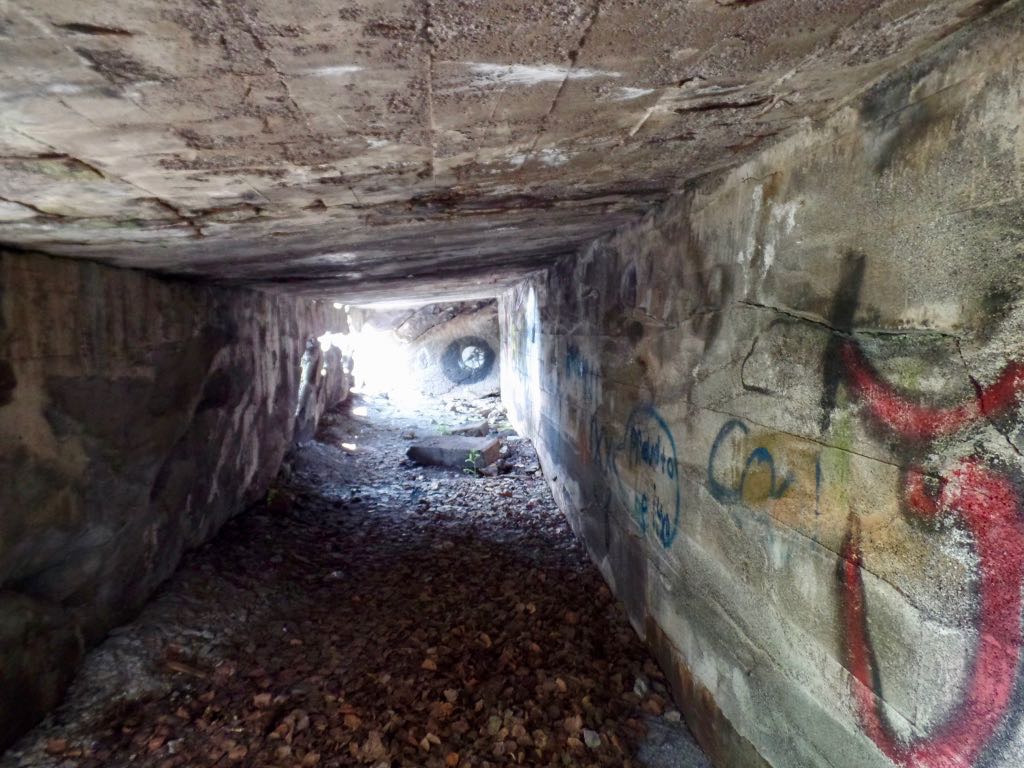 Fairly short --- I want to say about five foot --- tunnel underneath a layer of floor. Have to imagine a lot of young people with more ability to crouch than I have found this place worth using. 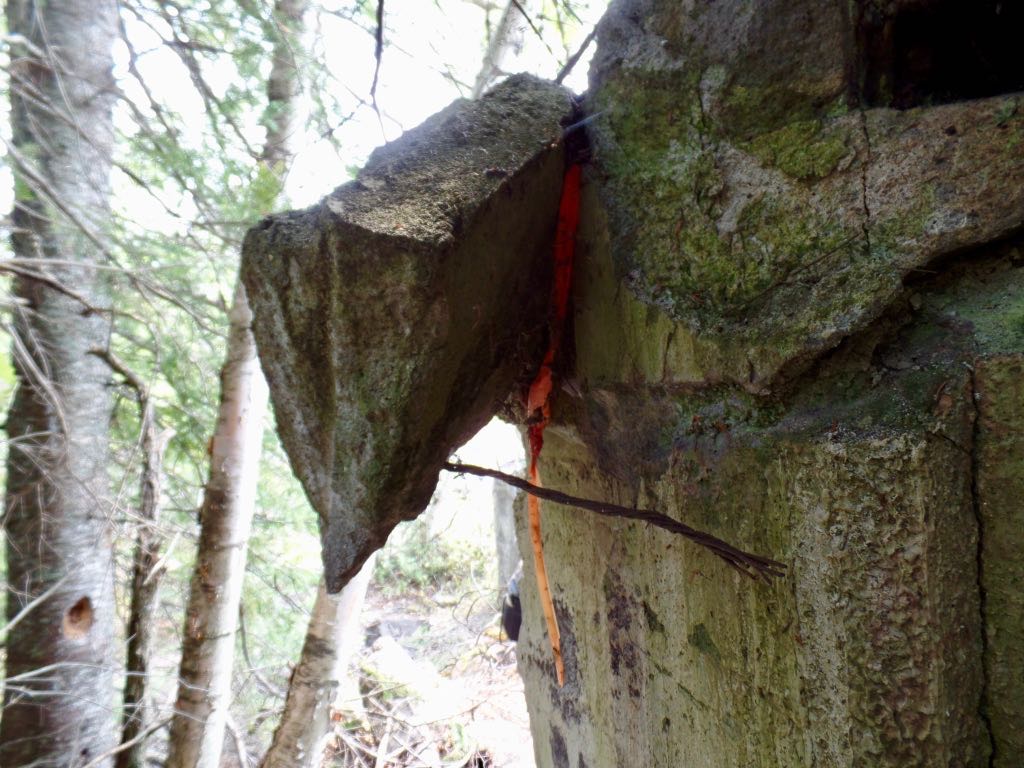 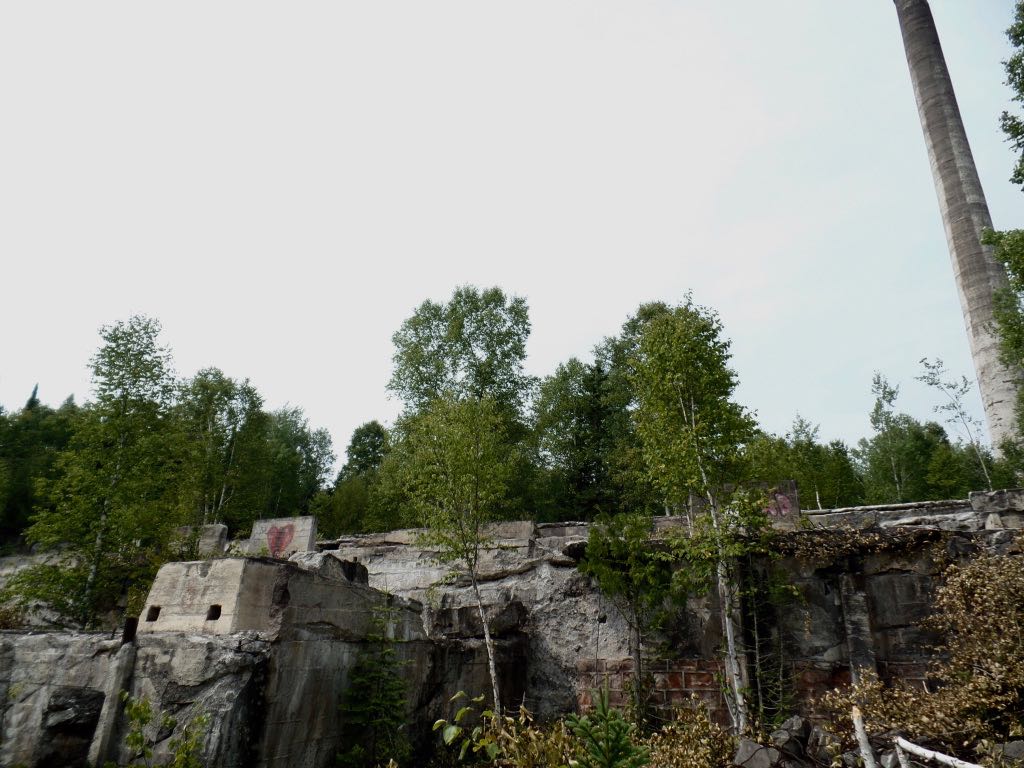 So here I look back at the factory remains; we're about halfway through the concrete floor. If you think it looks like the remains of a medieval castle, all I can say is ... 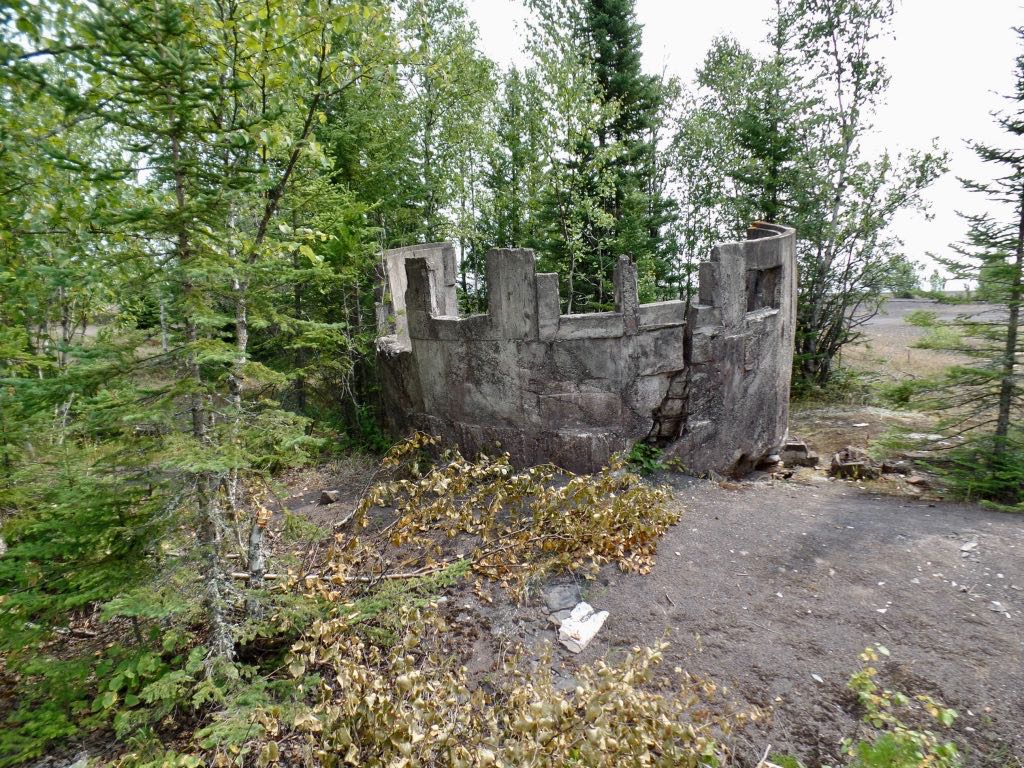 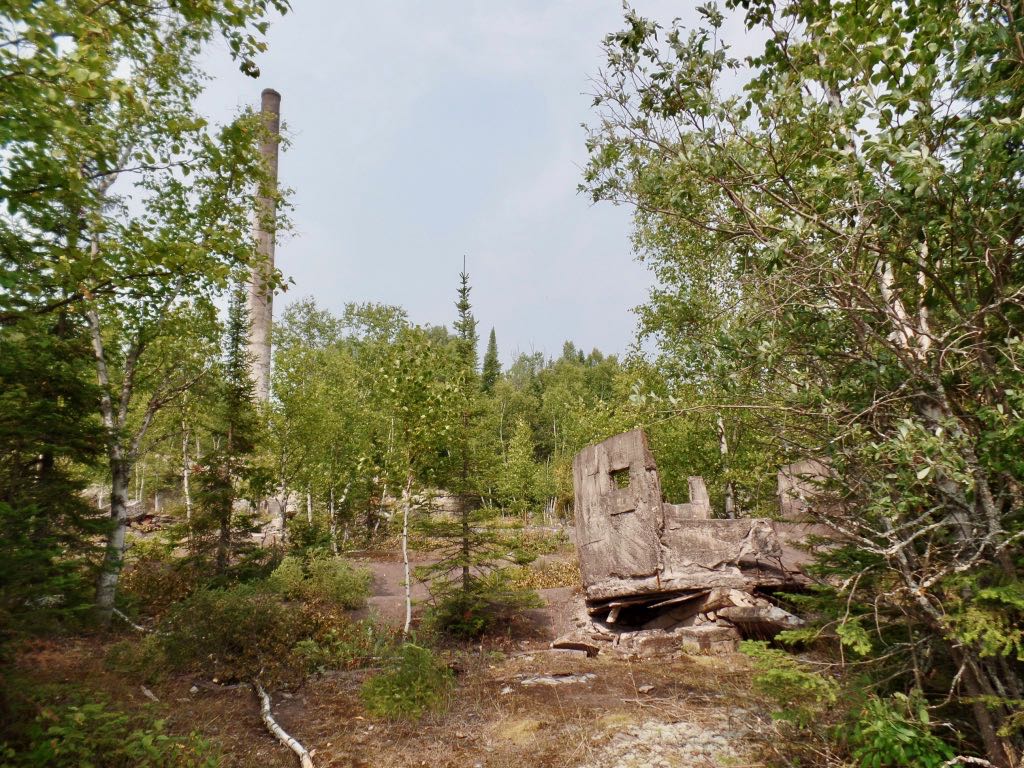 This, now, gets us past the remains of the factory; here's one look back at all of it and the amazing job nature has done in reducing it to landscape. 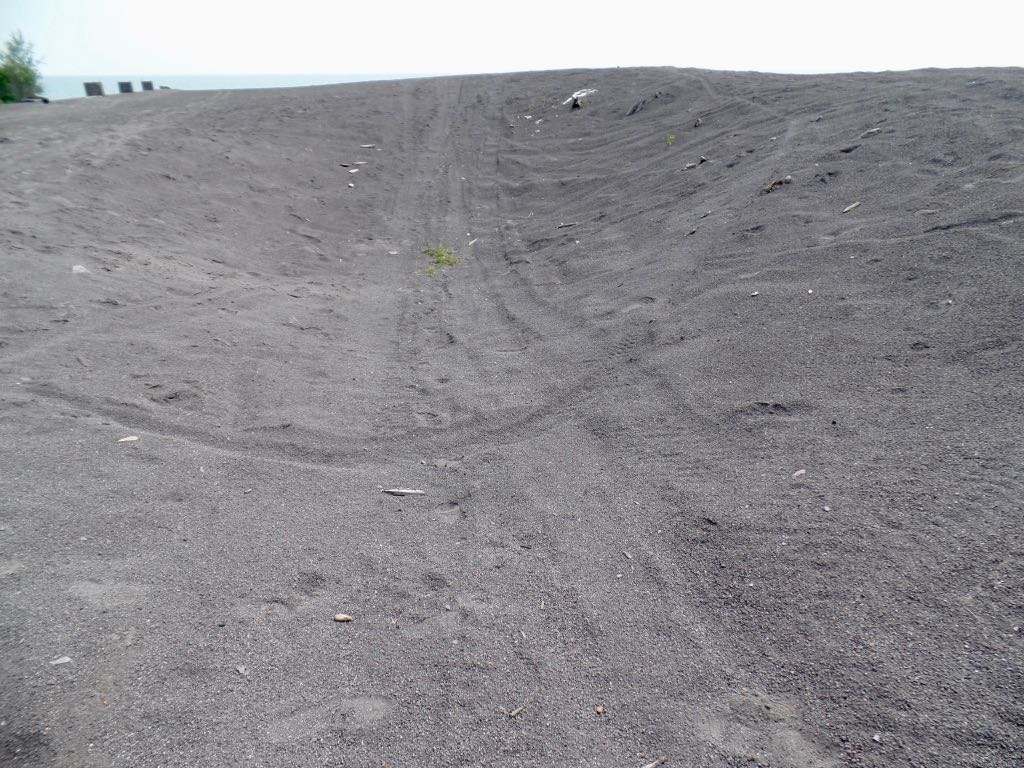 The factory would smash ore into chunks of copper, which were valuable and sold for money, and then everything else, which was sand. Which they dumped in the lake, expanding the down and shrinking Lake Superior. And creating, here, the stamp sand beach. 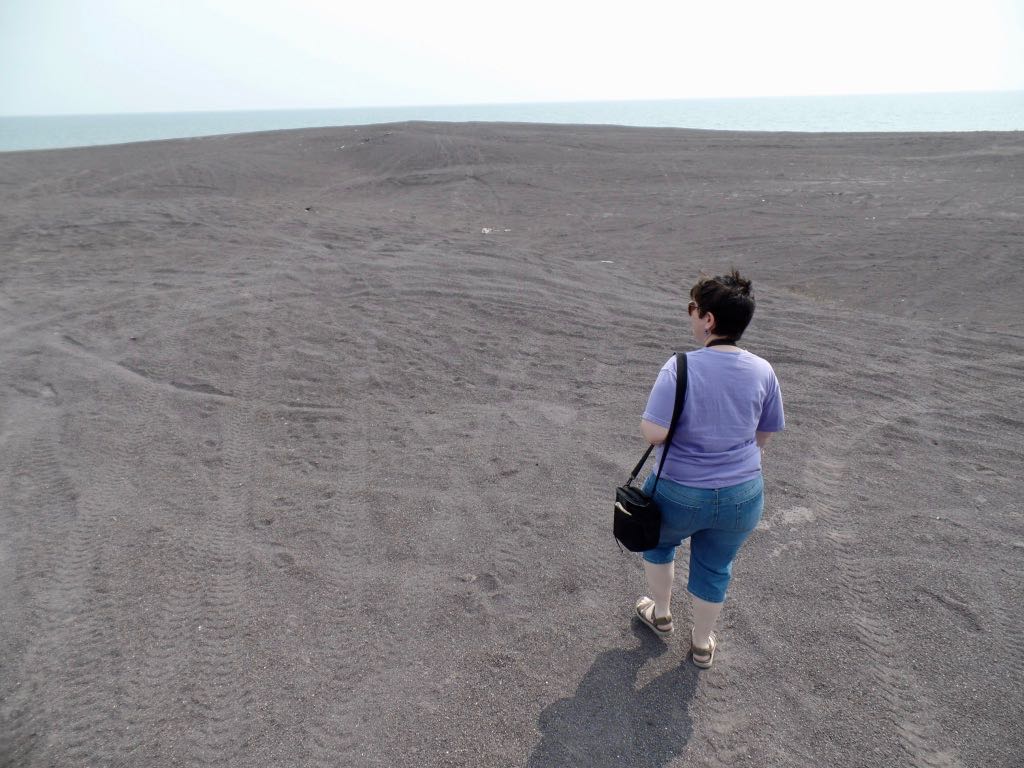 It's a lot of beach. The remains of the ore are this dark powder that feels not-quite-natural, and you see how it all looks. 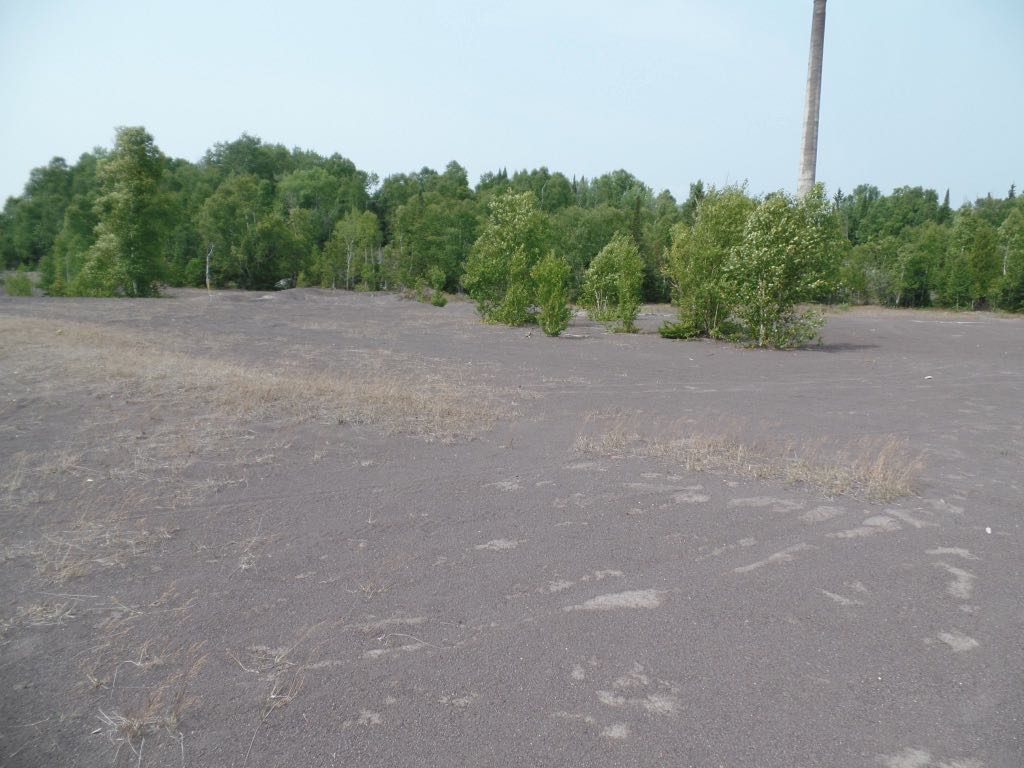 Some grasses are able to survive in the stamp sand, but it still feels like walking on Mars. 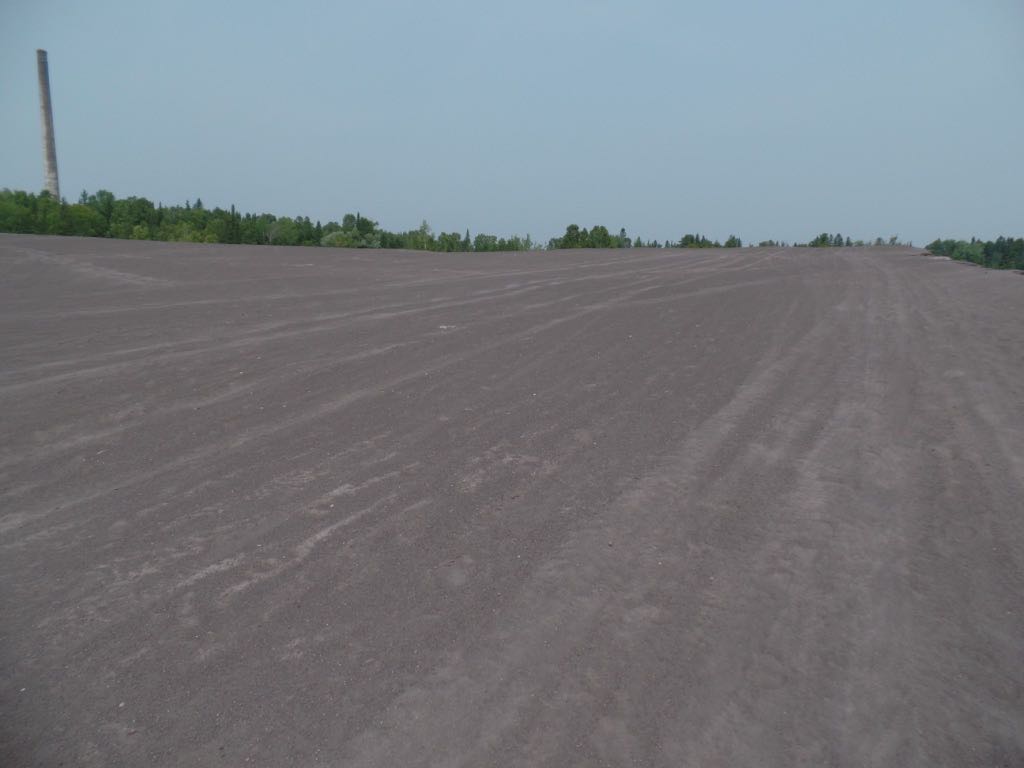 RV tracks in the stamp sand which does nothing to make it seem less desolate. 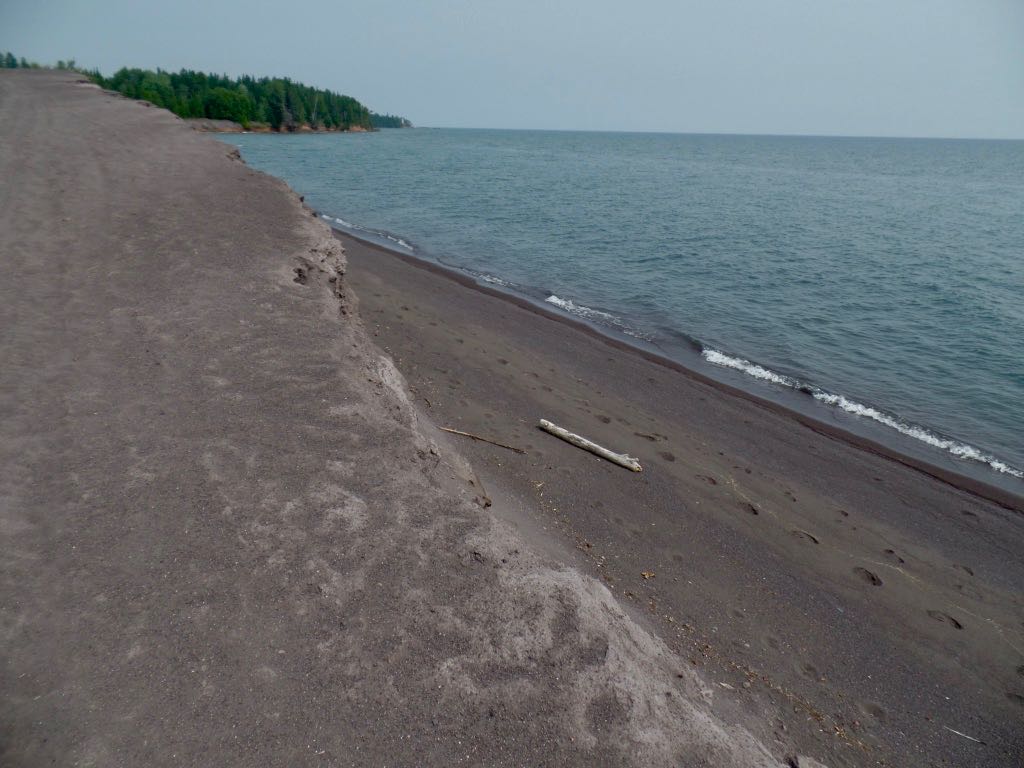 Just before the water's edge we get this sharp cliff; outside that, Lake Superior gets to the hard work of turning this sand into a more naturally ground sand.

The best of my attempts at a panoramic view of smokestack, lots of sand, and lake. 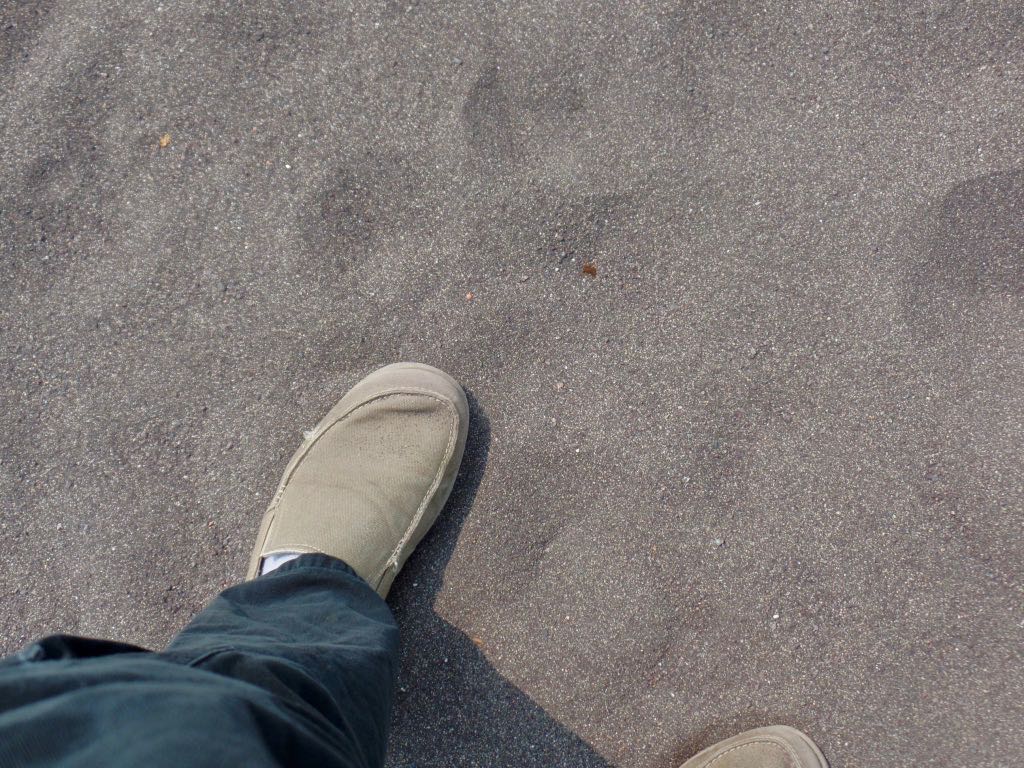 Looking down at my own feet and the slight impression they make in the sand.

Trivia: Annual world production fluorspar, from which we get florine, is about four million tonnes; about 120 million tons of reserve are known. Source: Nature's Building Blocks: An A-Z Guide to the Elements, John Emsley.

Currently Reading: Miscellaneous Harvey and Marvel-Star comics, including Top Dog, Harvey Spotlights, and Richie Rich. Many writers, not all of them identifiable. Correspond with me in case of serious inquiry only.