DelGrosso's amusement park, in Tipton, Pennsylvania, won't open this year. Season passholders can get a refund or just transfer the pass to 2021. It's the first park we've heard about that's declaring the 2020 season a total loss.

I'm not specifically worried about DelGrosso's surviving a closed year. The park isn't the only thing they do, particularly. It's the amusement park side of the DelGrosso Foods company, which makes spaghetti sauces and salsas and things like that. Spaghetti sauce is about as reliable a thing as can be made even if the Republican death cult forces states to abandon public health. And the park has been, and plans to still, sell park food. DelGrosso's still works as an a-la-carte park, so you can just drive up and stop in and eat, and a lot of locals do, because the park is really good at making food. So they've got something.

I don't know who'll be next. I have the feeling that we're approaching Cedar Point telling us they won't open for the year. The number of special events, including their whole sesquicentennial celebration, postponed to 2021 is suggestive. 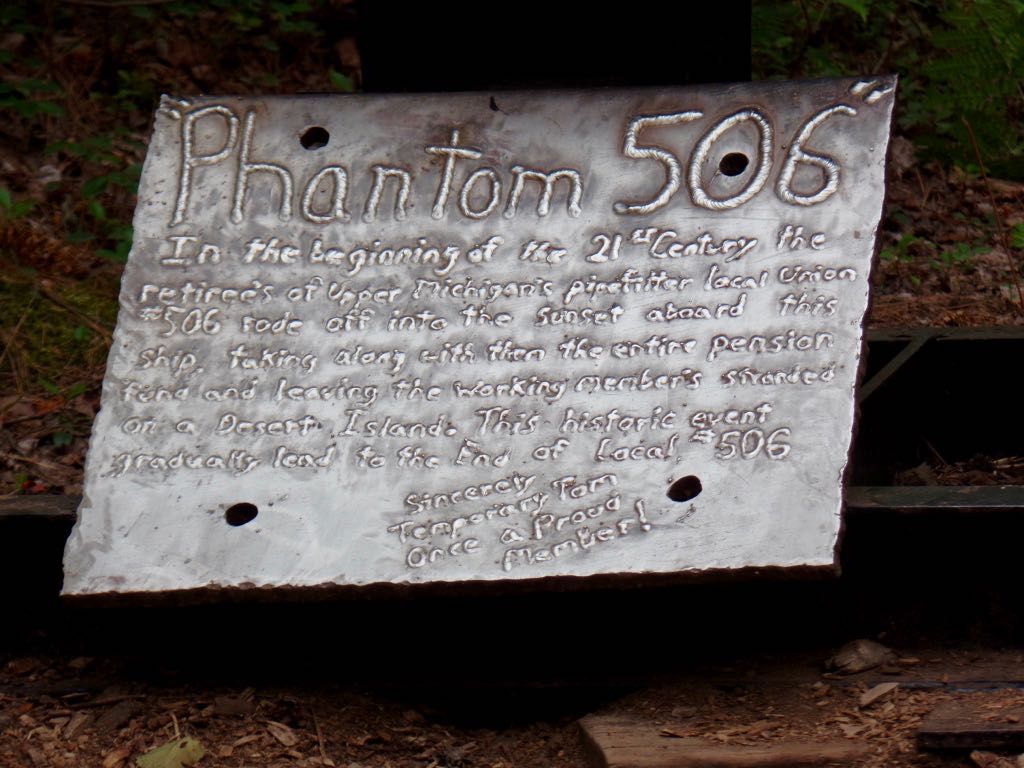 So here's the meaning of the sailboat: it's about the Upper Michigan Pipefitter union local 506, the management of which, Tom Lakenen alleges, made off with the pension fund. 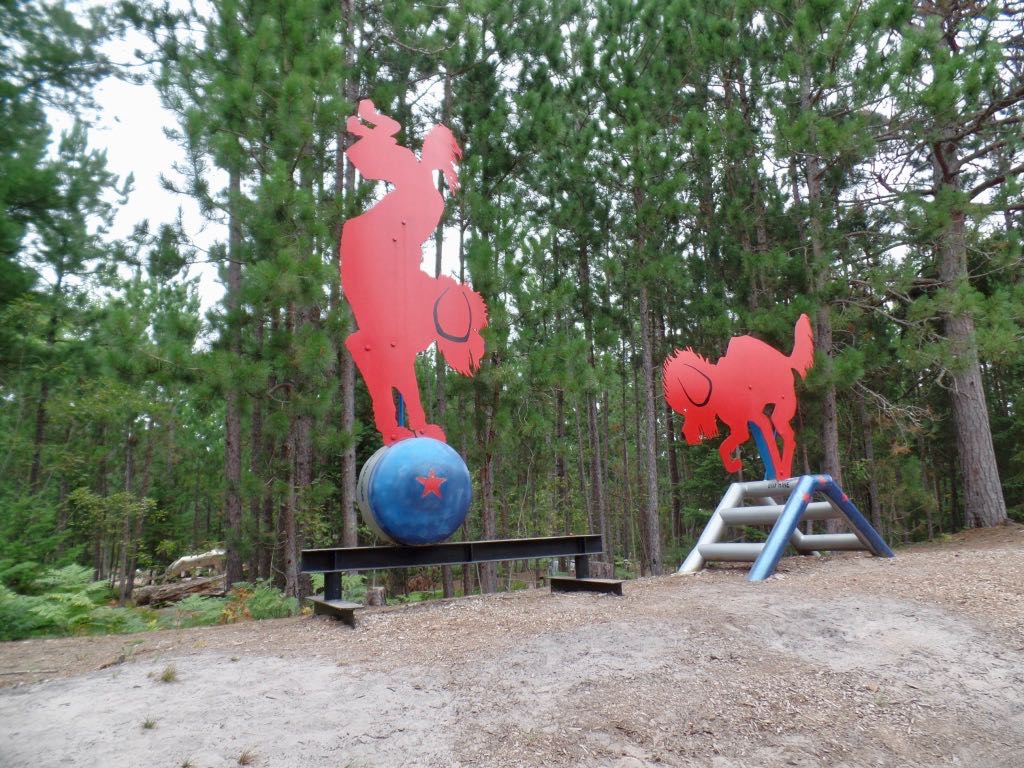 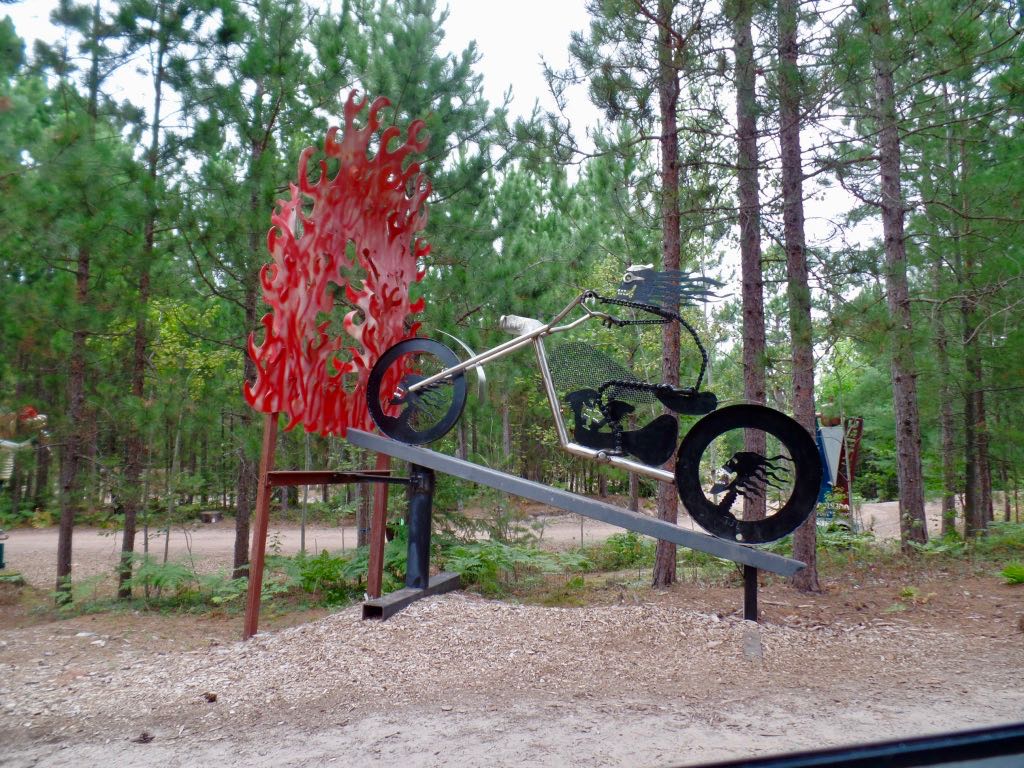 Yeah so I'm sorry nobody in your high school drew this on their notebook even the one time. 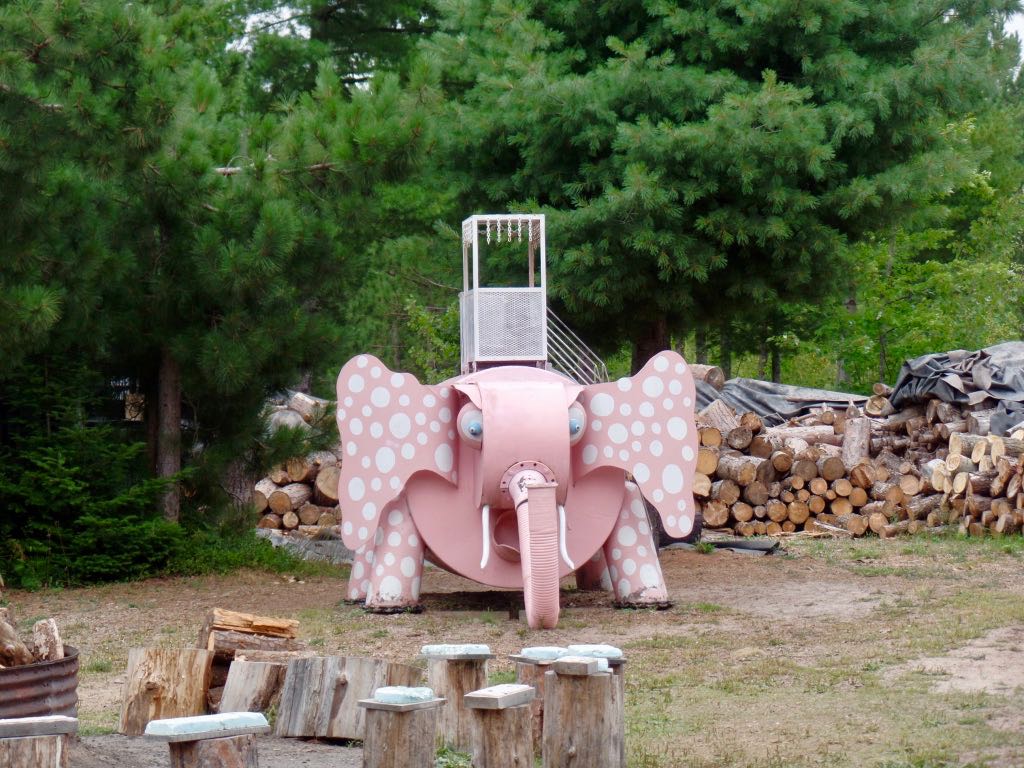 And then here's this pink elephant sculpture complete with ... that thing you put on top of elephants to ride them. 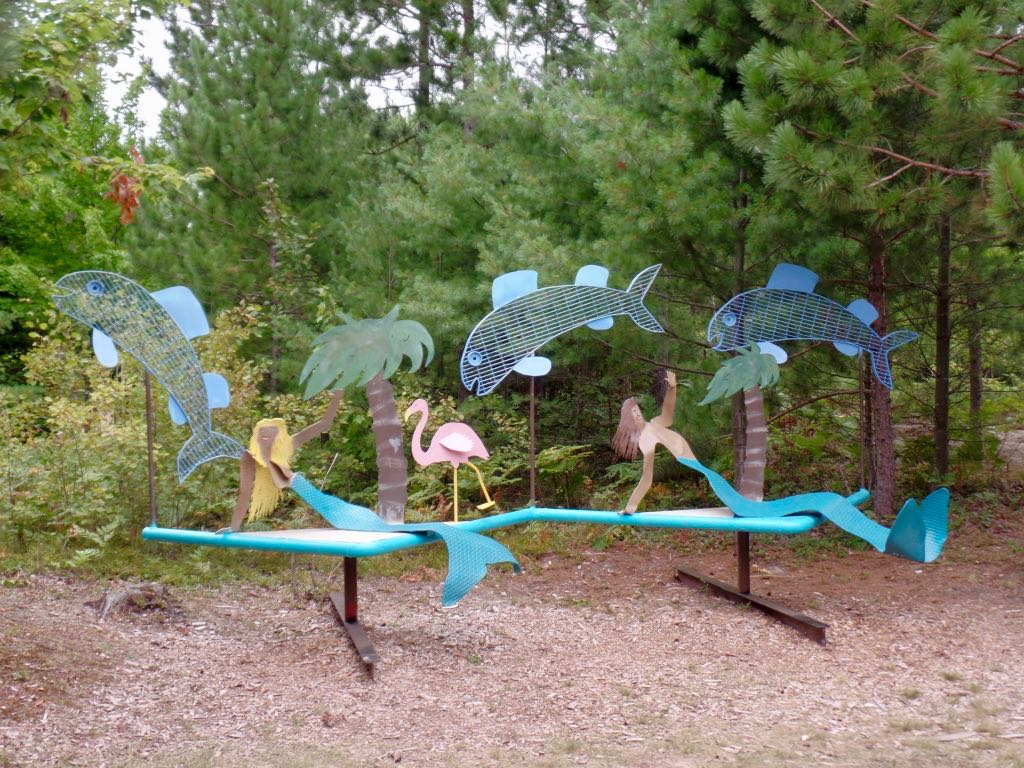 Mermaids and flying fish as sculptures. 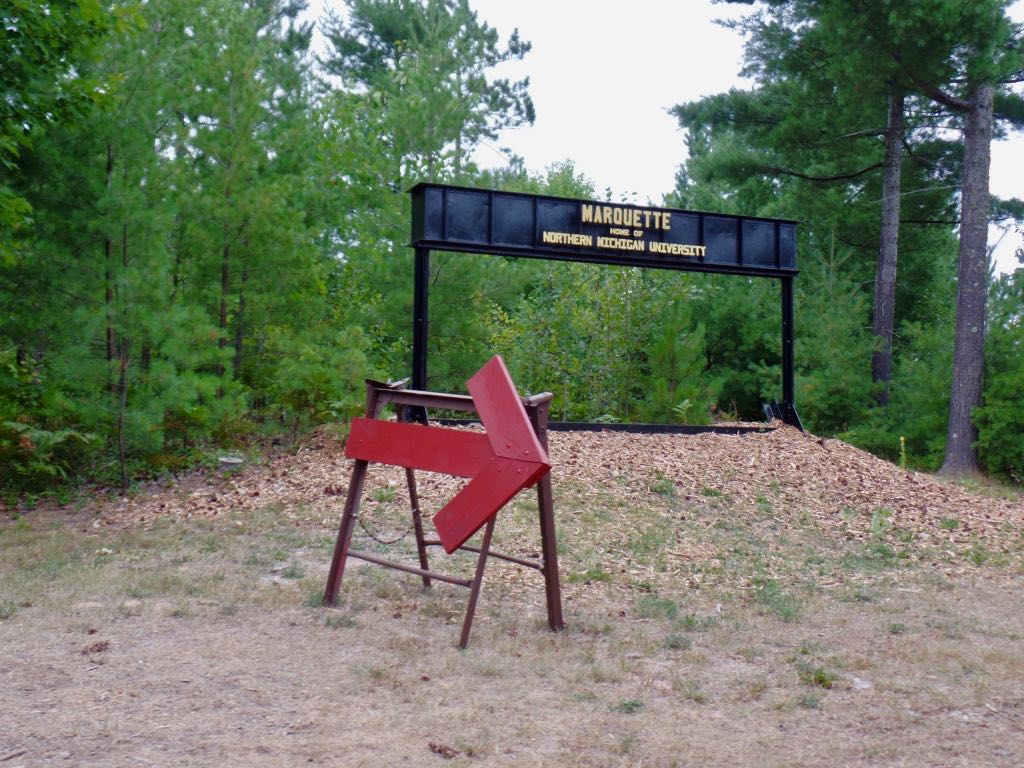 So this arrow and the sign reading Marquette, home of Northern Michigan University, somehow does not answer the questions I might have had about its existence. 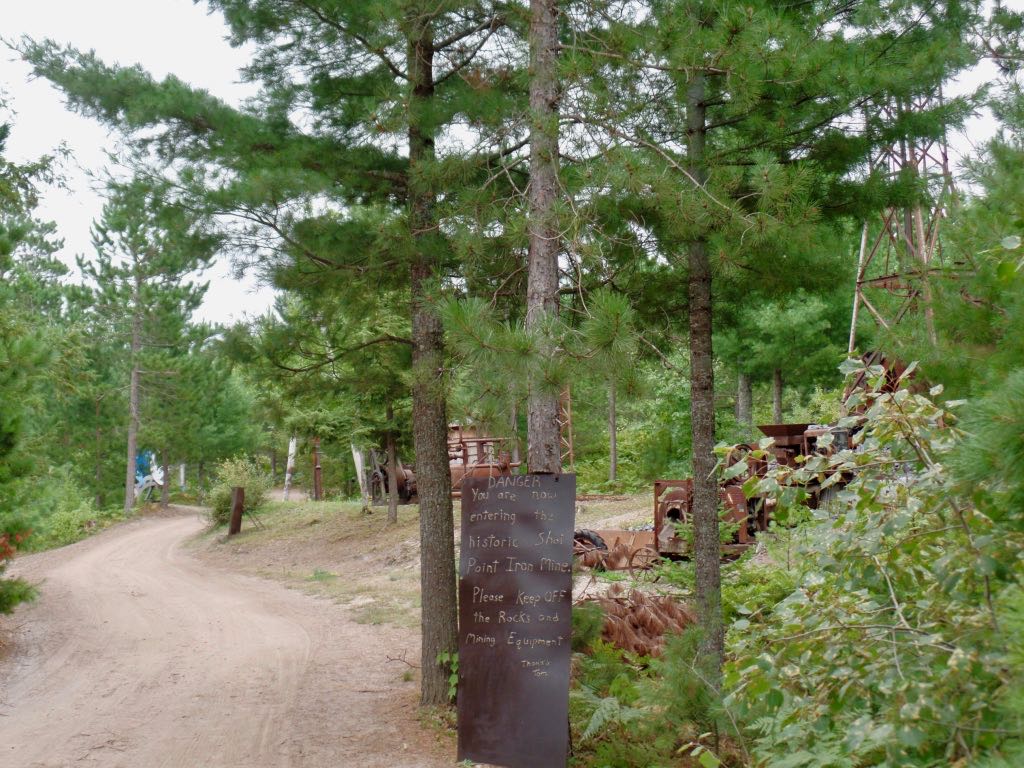 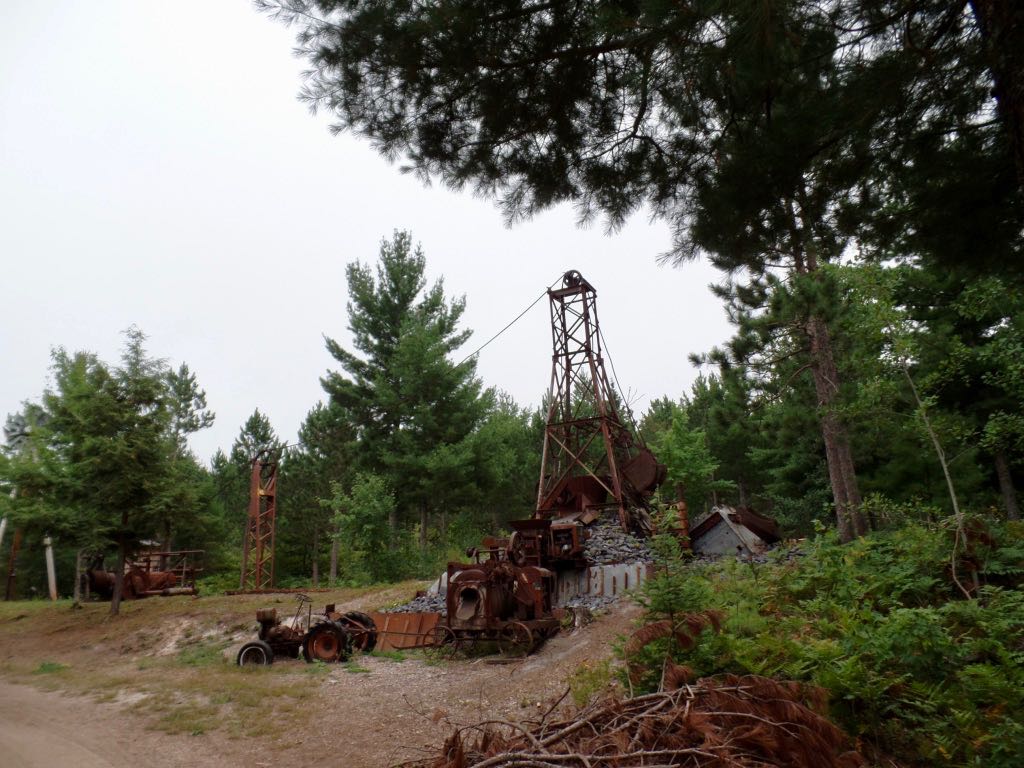 Is it real, though? The upper peninsula had a lot of mines, some of them quite tiny things, so it's not impossible, but ... ? 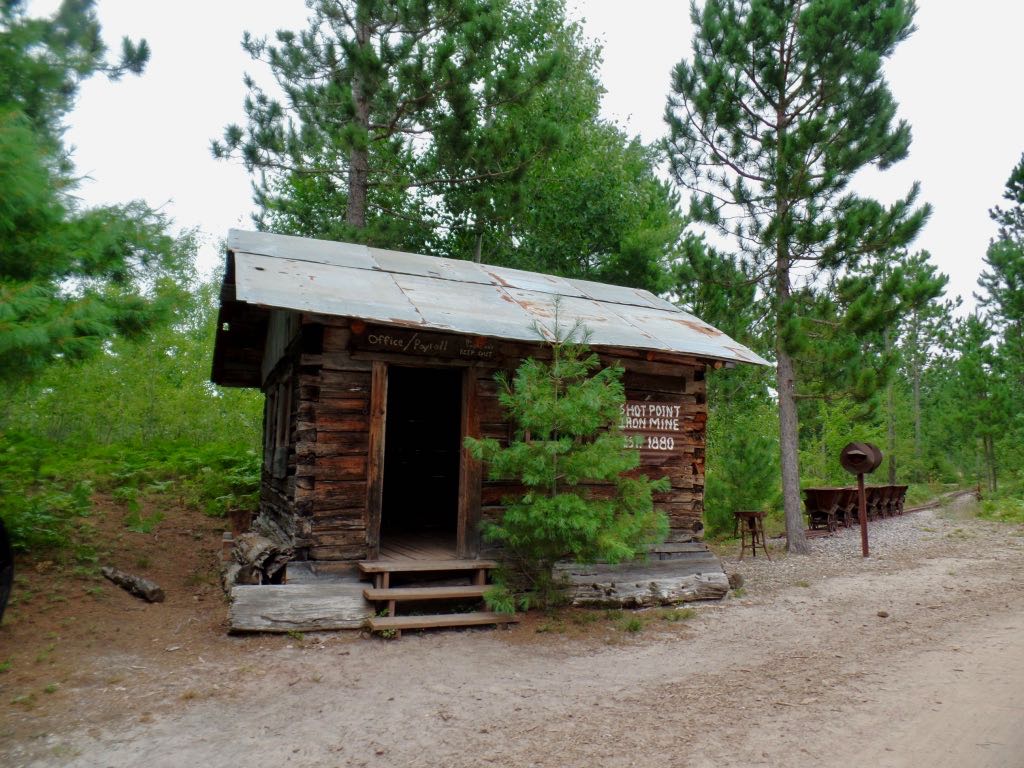 So here's the payroll office and I guess management, and a small ore car train that could have been used to get ore out to somewhere useful. 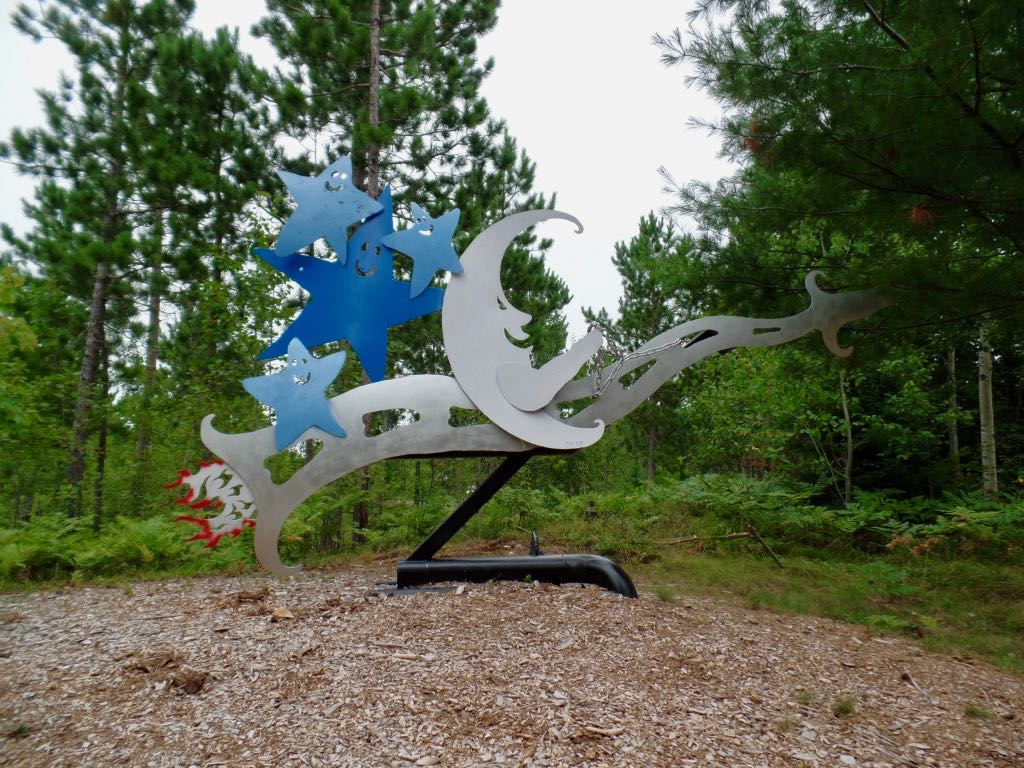 A moon and stars riding a slender rocket. That's exciting. 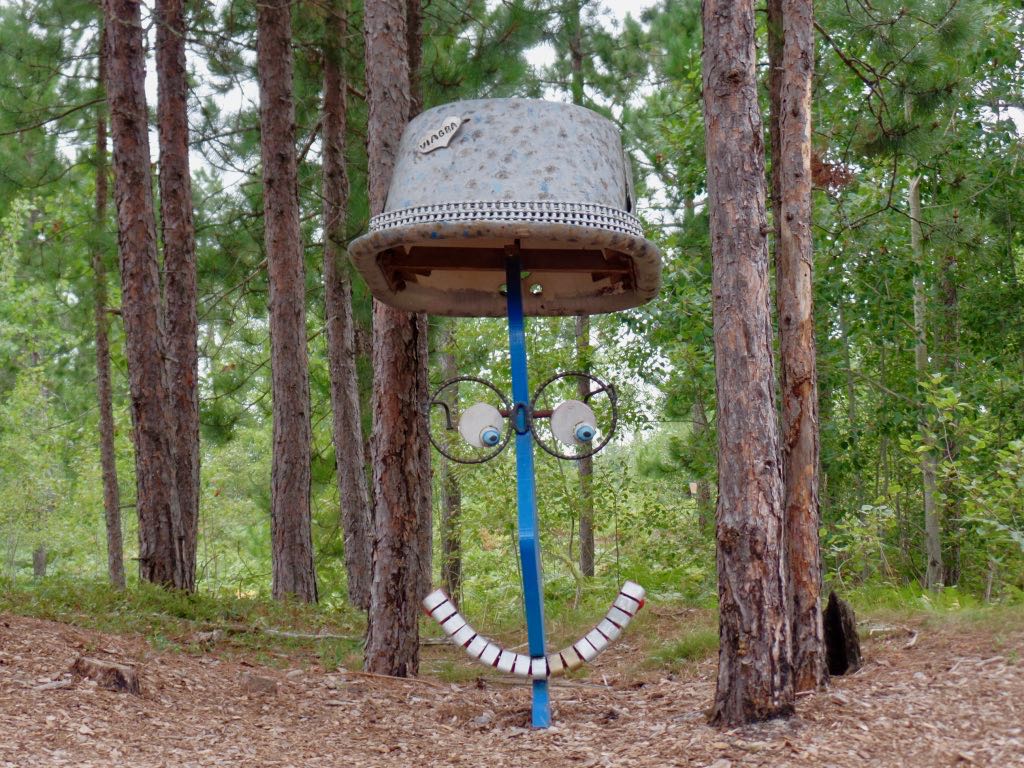 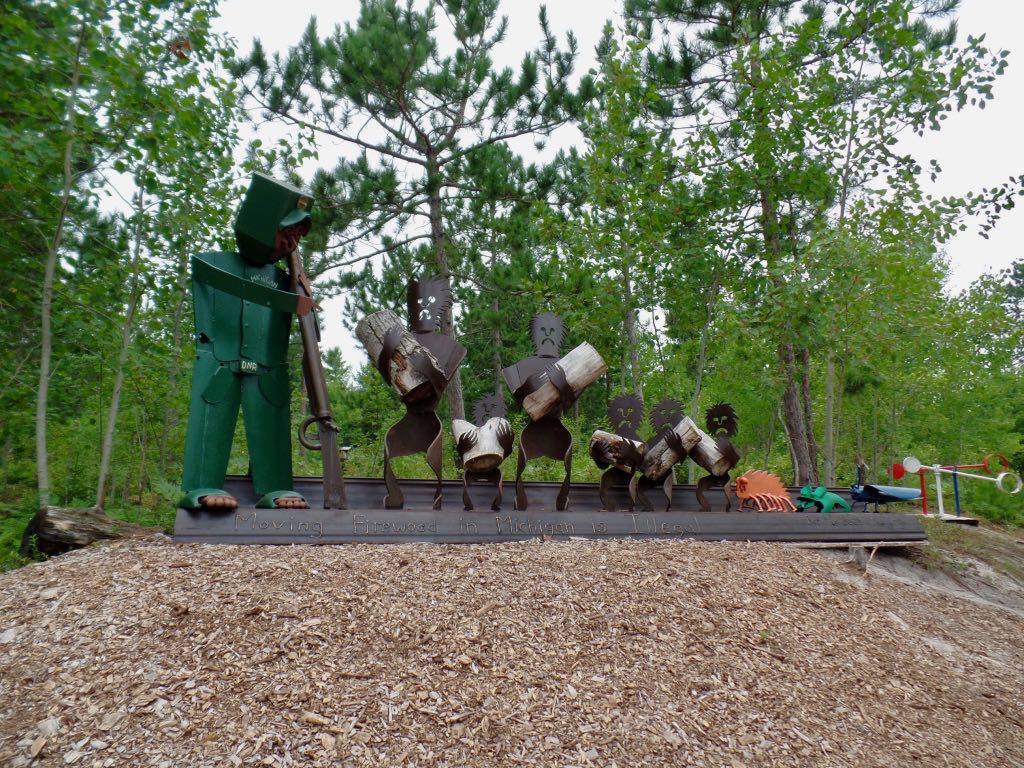 And now a metal family all toiling? I am not sure if it's meant to signify anything past that. 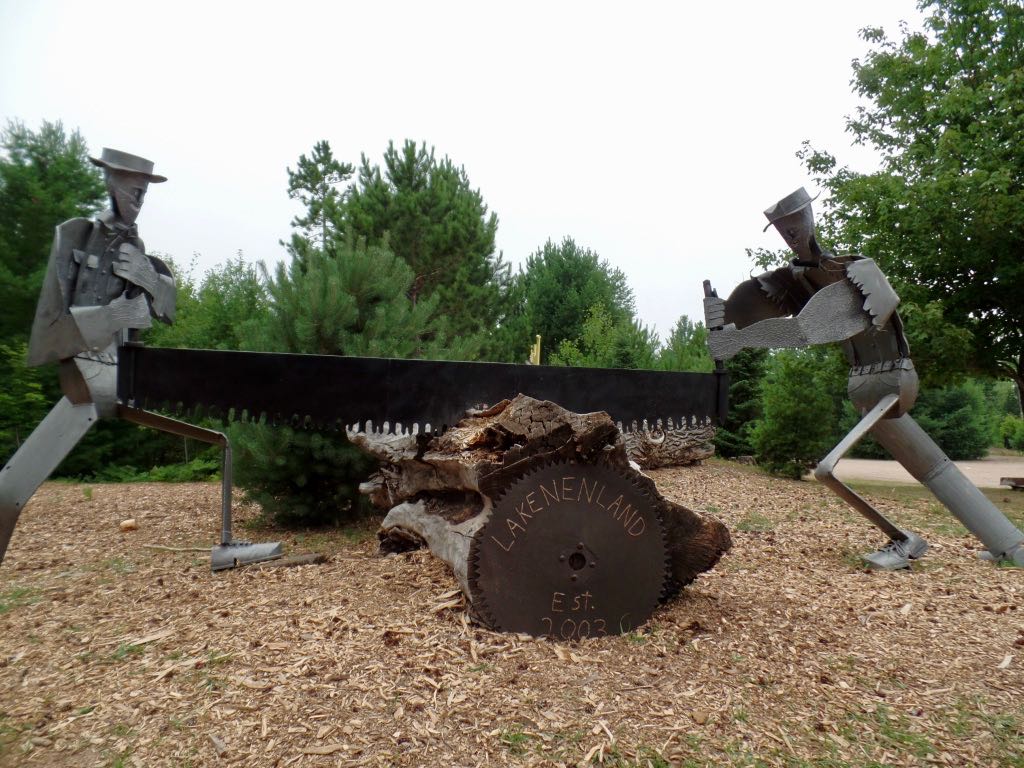 Woodcutters at work on a log representing the establishment of Lakenenland. 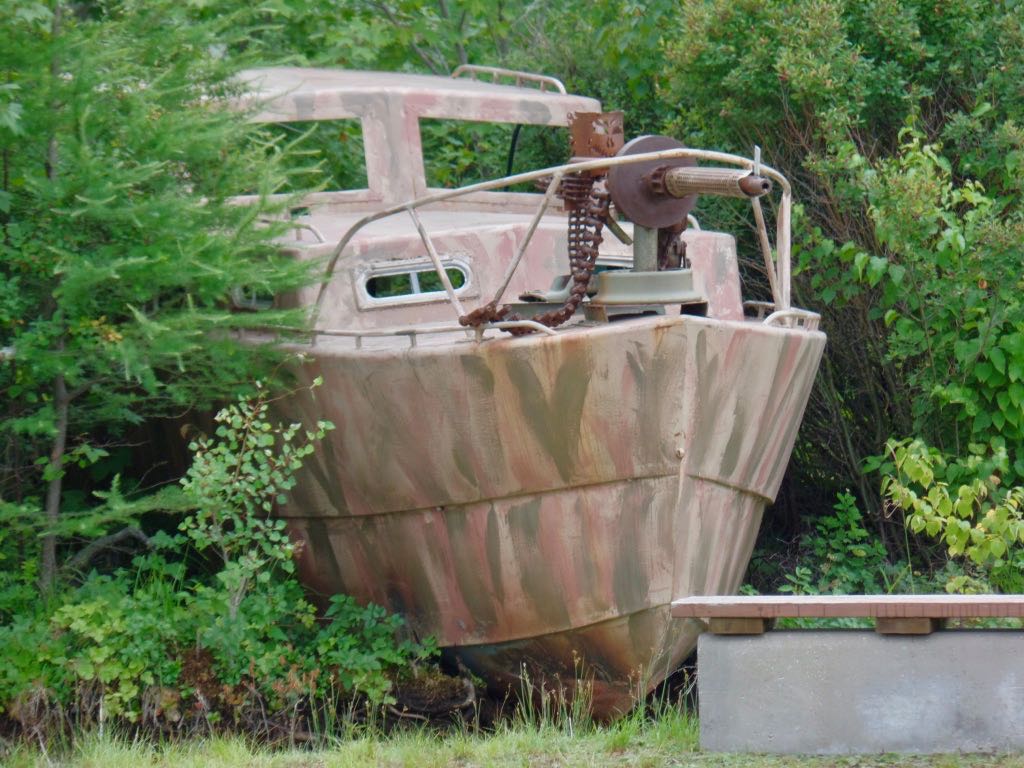 And exploring out front of Lakenenland I found this boat with a machine gunner on top. All right, so, that seems like an ambiguous welcome. 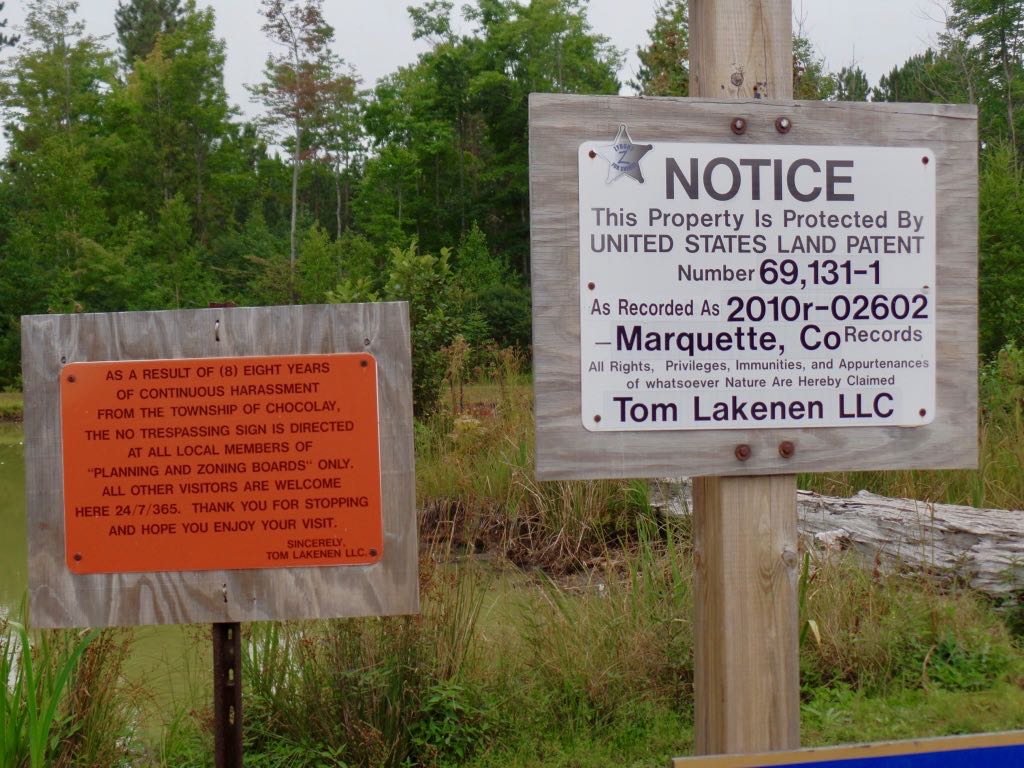 And so now we start to get a bit more insight into the person behind this junkyard-art garden. The star on the notice about the land patent reads 'Zyburg Z for Sheriff'. 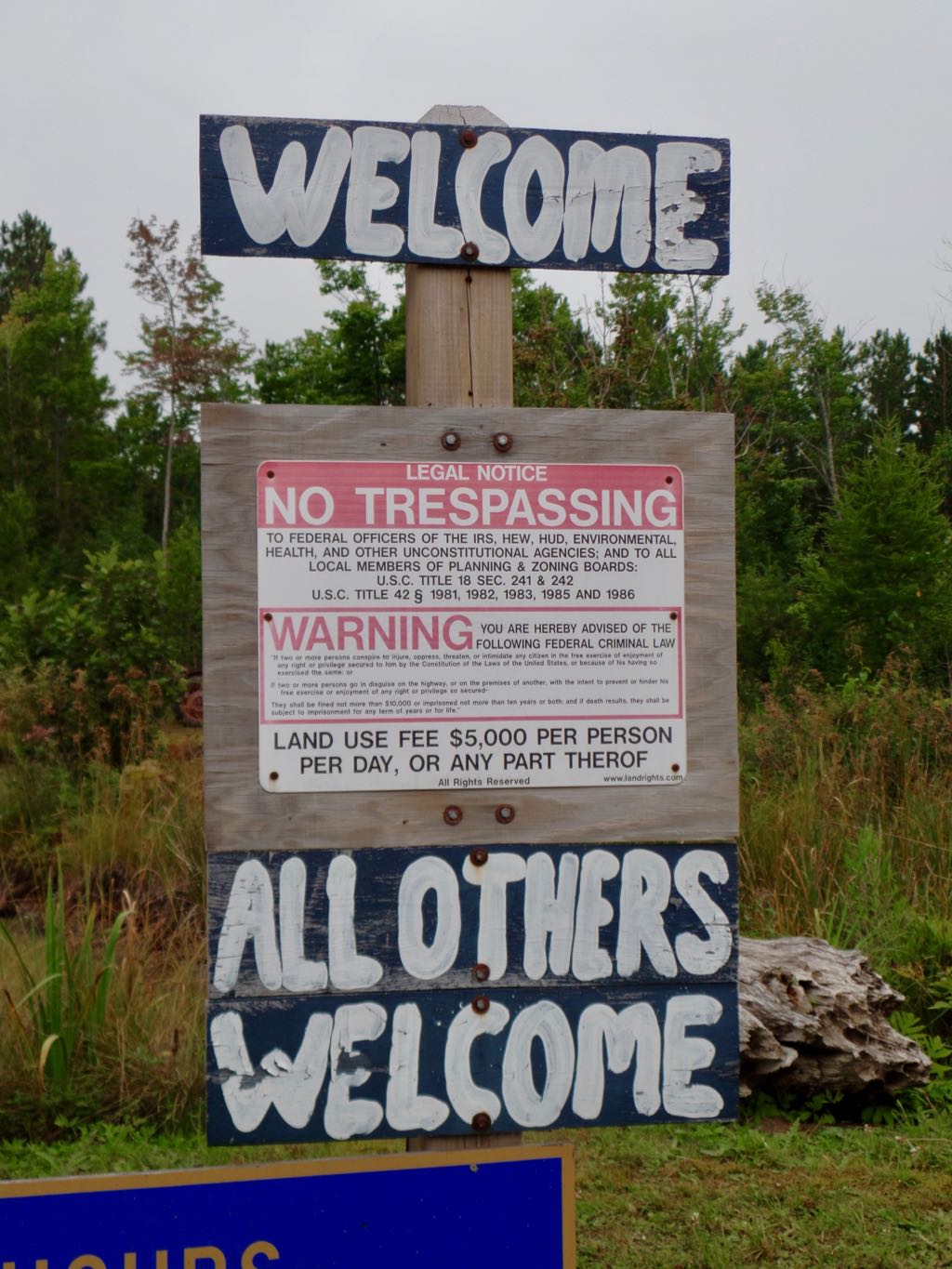 So how long do you suppose the guy making the sign for him tried to explain that the Department of Heath, Education, and Welfare hasn't been called that since like 1979 when the Department of Education was split off from it, before deciding, they're just not going to win this one so fine, whatever.

Trivia: The 12,000-mile-long Customs Hedge, thick briars planted by the British along the Custom Line in India, was most likely established sometime in the 1840s. It is not clear just when. Source: The Great Hedge of India: The Search for the Living Barrier that Divided A People, Roy Moxham.