So let's get back to Michigan's Adventure. Not, I wish to stress, on the closing day of August, 2018. No, this is the closing day of the whole park, Labor Day 2018. For those keeping track by the way: the first of the year, 2020, I was sharing pictures from a mid-June 2018 amusement park trip. Now, I've gotten to pictures from an early-September 2018 amusement park trip. We're lucky there's some months I don't go to amusement parks so there's any hope of my catching up on photos. 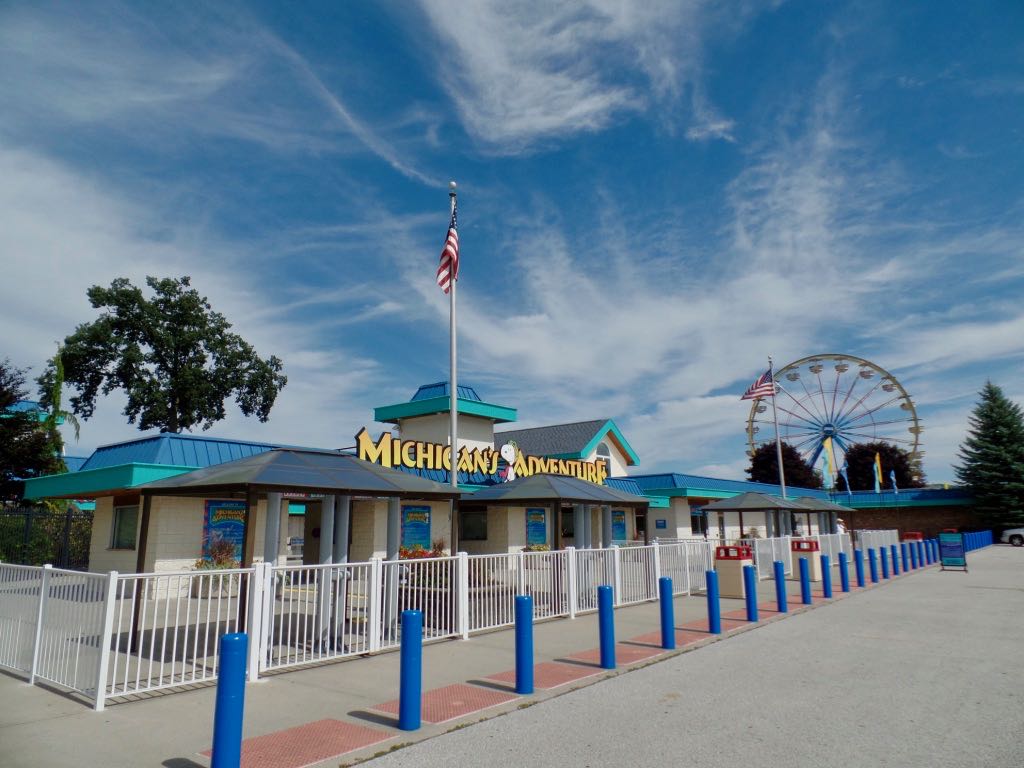 Entrance to Michigan's Adventure, with the quite silly metal detectors. But from an unusual angle. The main mass of the parking lot is off to the right, from here, so we never have cause to look at the left side of the entrance. It's, mm. Well, it's there. 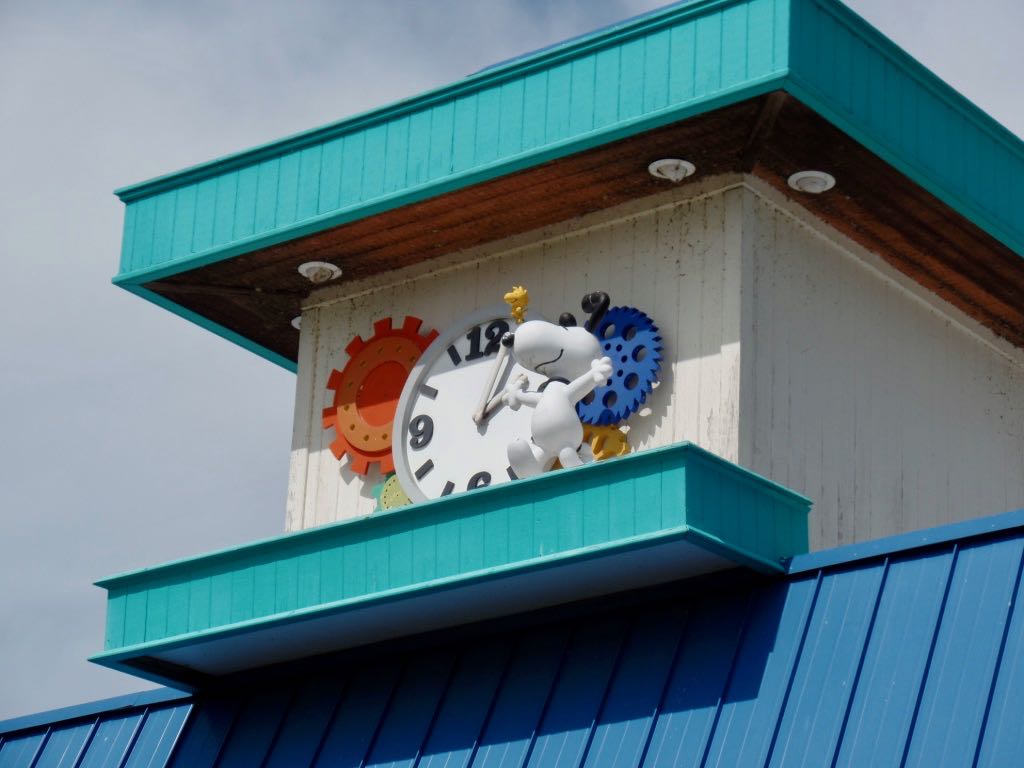 Snoopy clock that's atop the main gift shop just past the entrance. It's not actually wacky --- just the clock hands move --- but it looks like it ought to be. 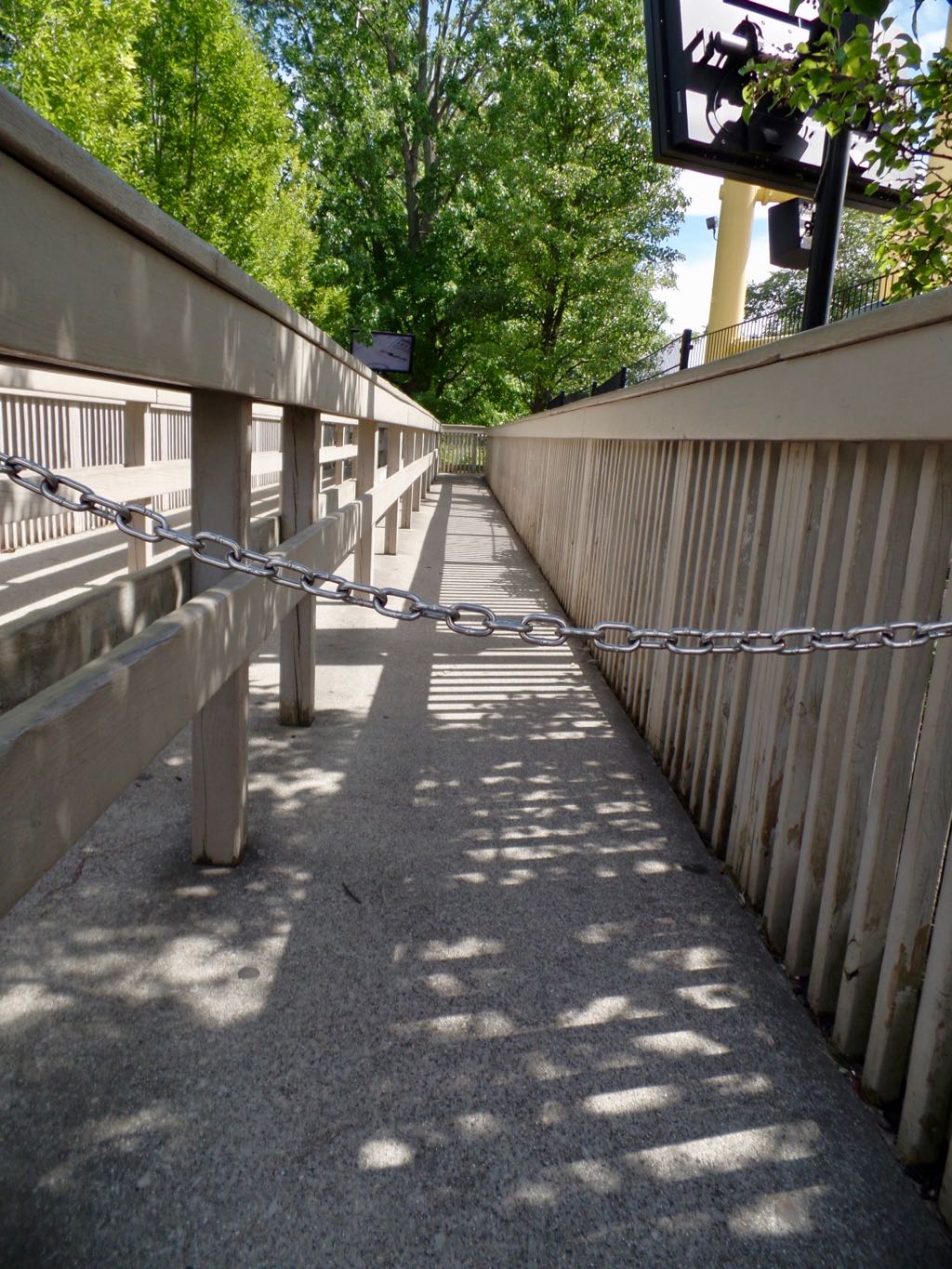 Mad Mouse was not having a good day, again. We were afraid they'd take the roller coaster out, given how little it was working when we visited, but it was all right in the 2019 season. 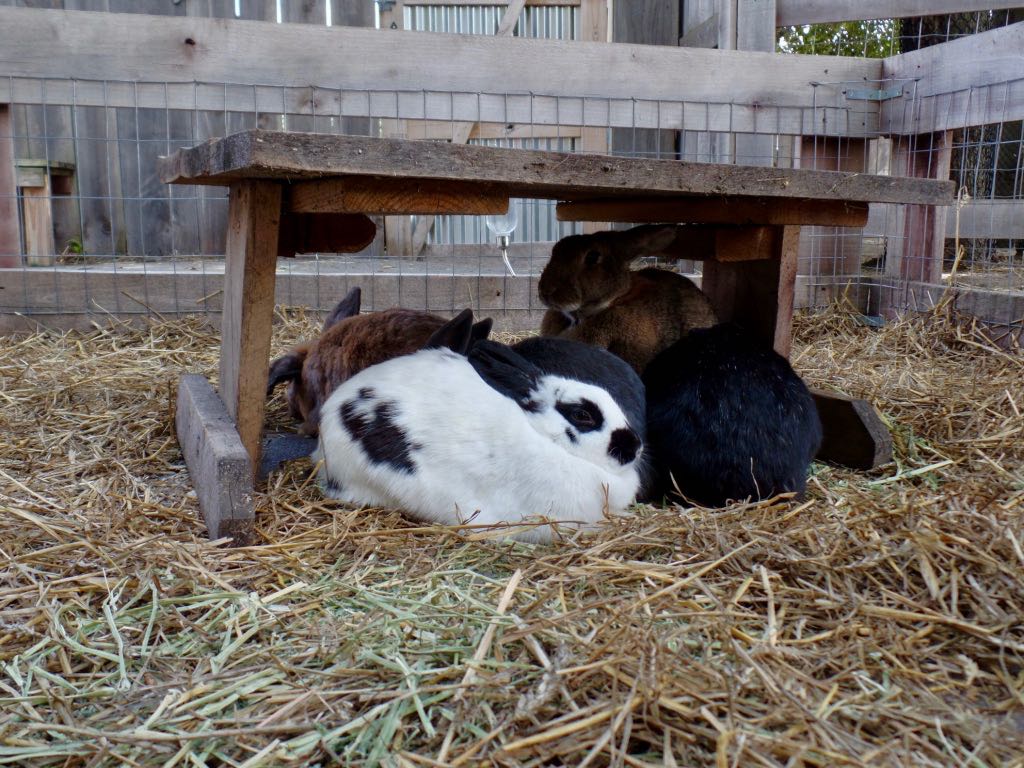 The petting zoo rabbits appreciate all the love you've given them all summer but wish now not to be touched, thank you. 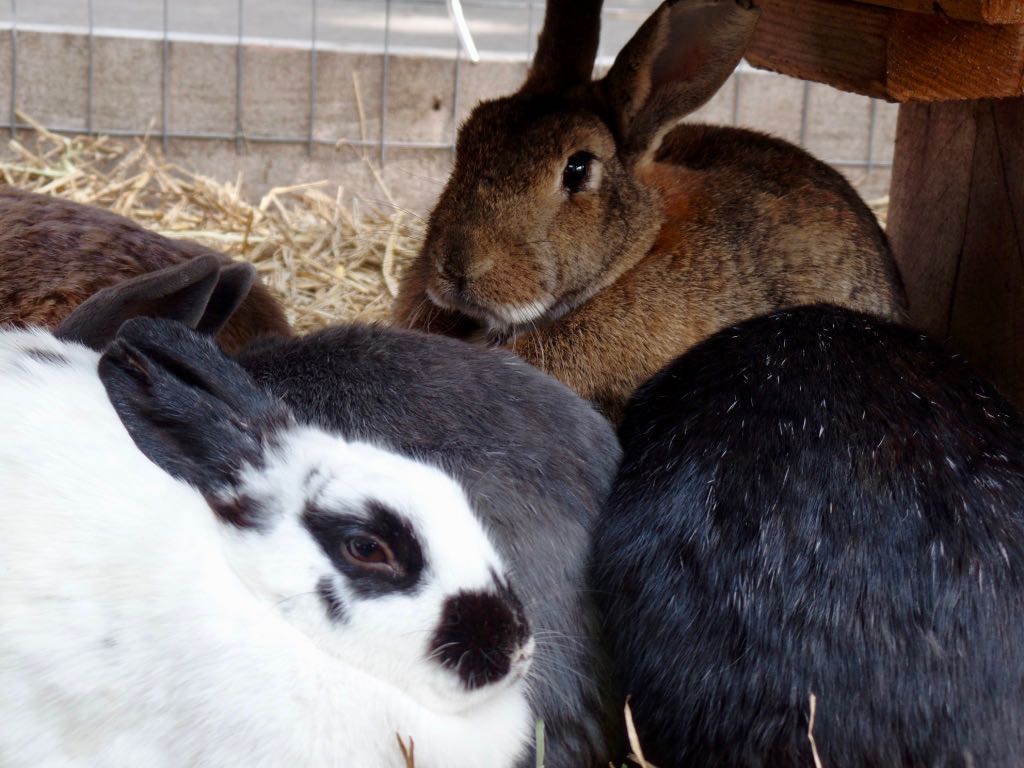 That's a lot of side-eye coming from the rabbits. 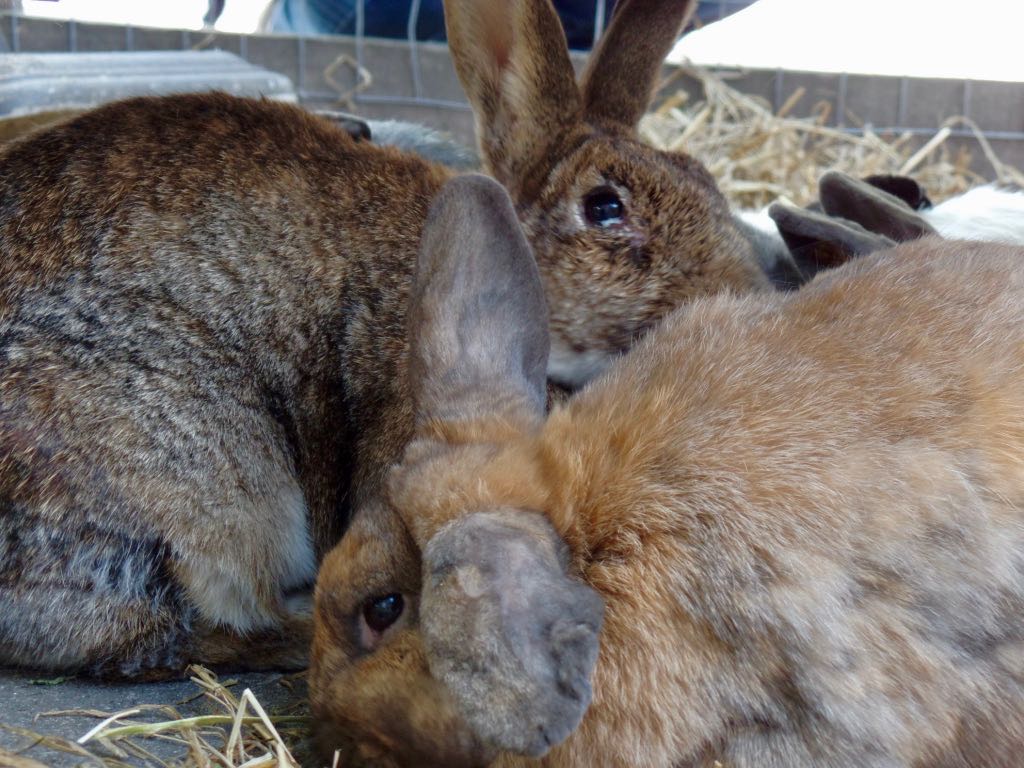 Seriously do not know what they're so suspicious of. 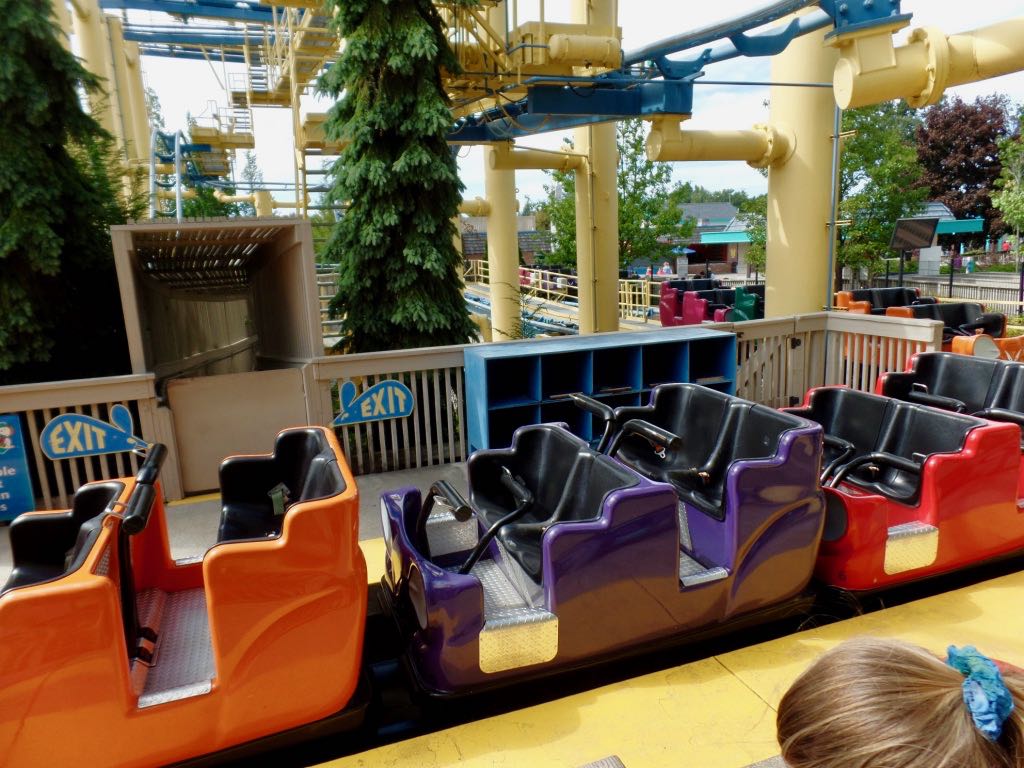 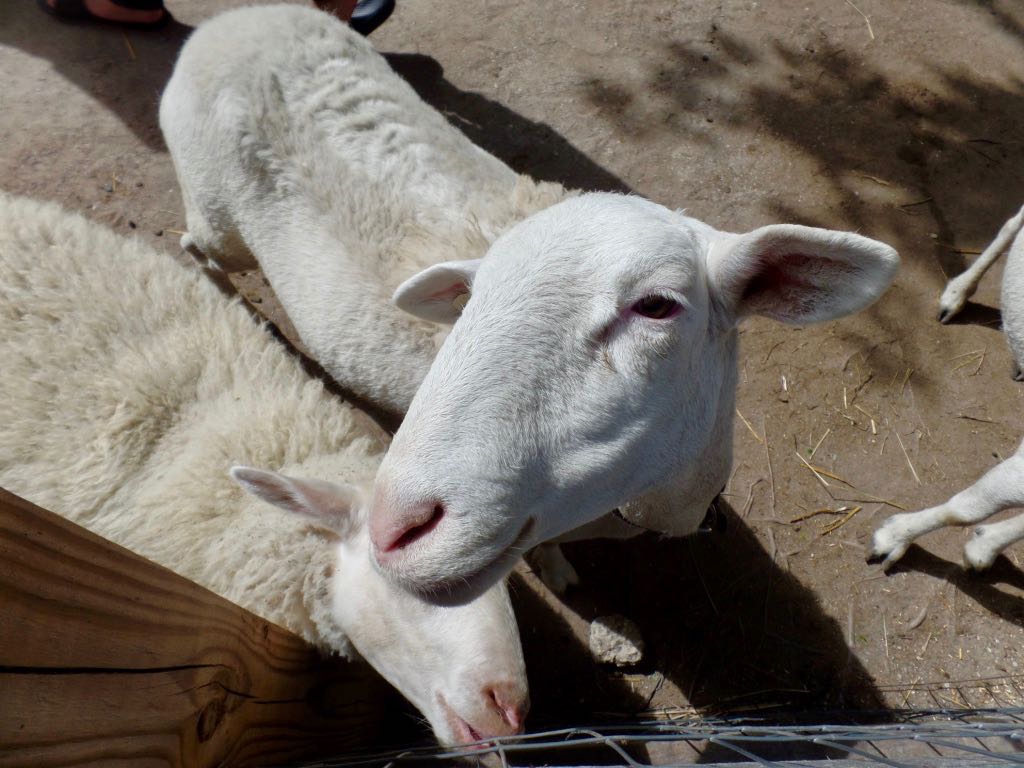 I could have told you that. The petting zoo's right next to Mad Mouse so the sheep and goats got really used to its problems. 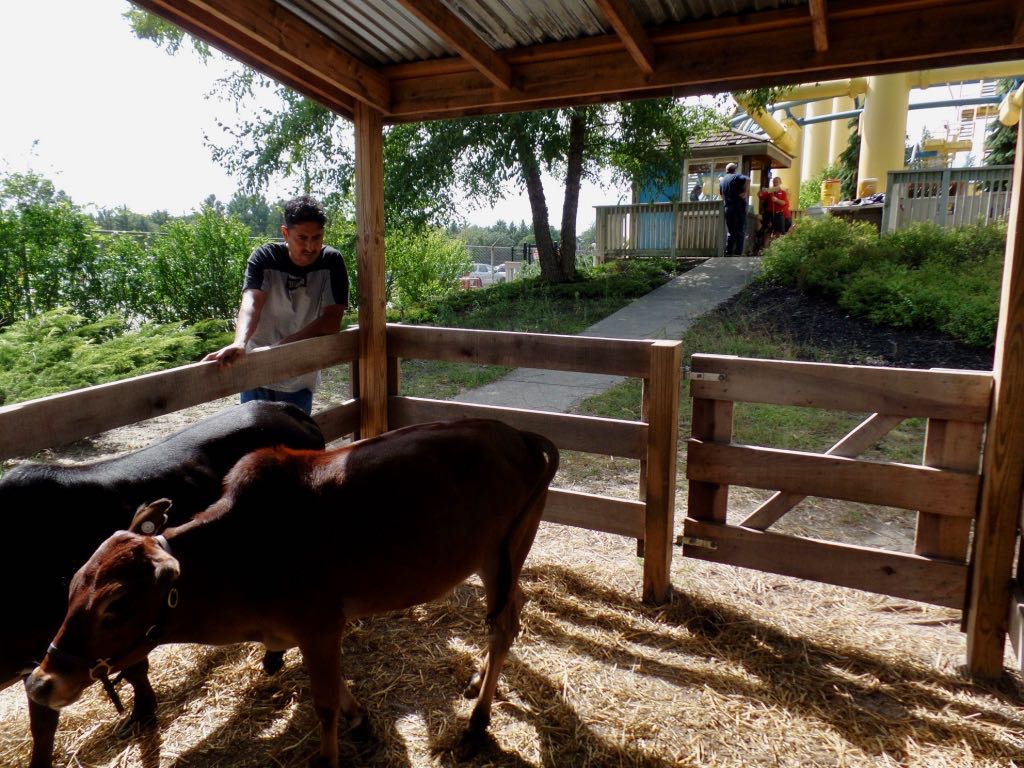 Looking over some cows while staff figures out what to do with Mad Mouse. 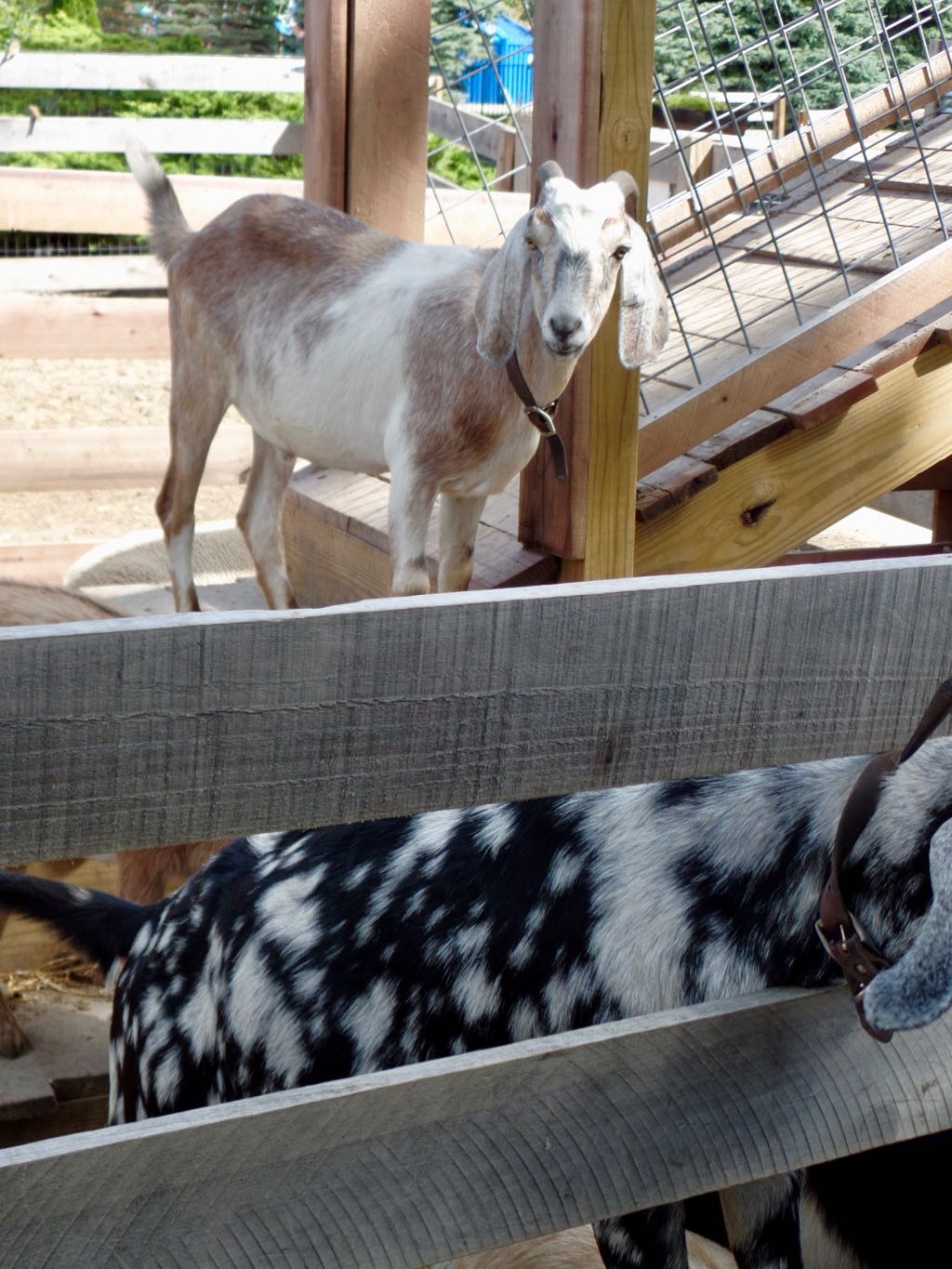 Goat is not going to allow a repeat of last week's bridge shenanigans. 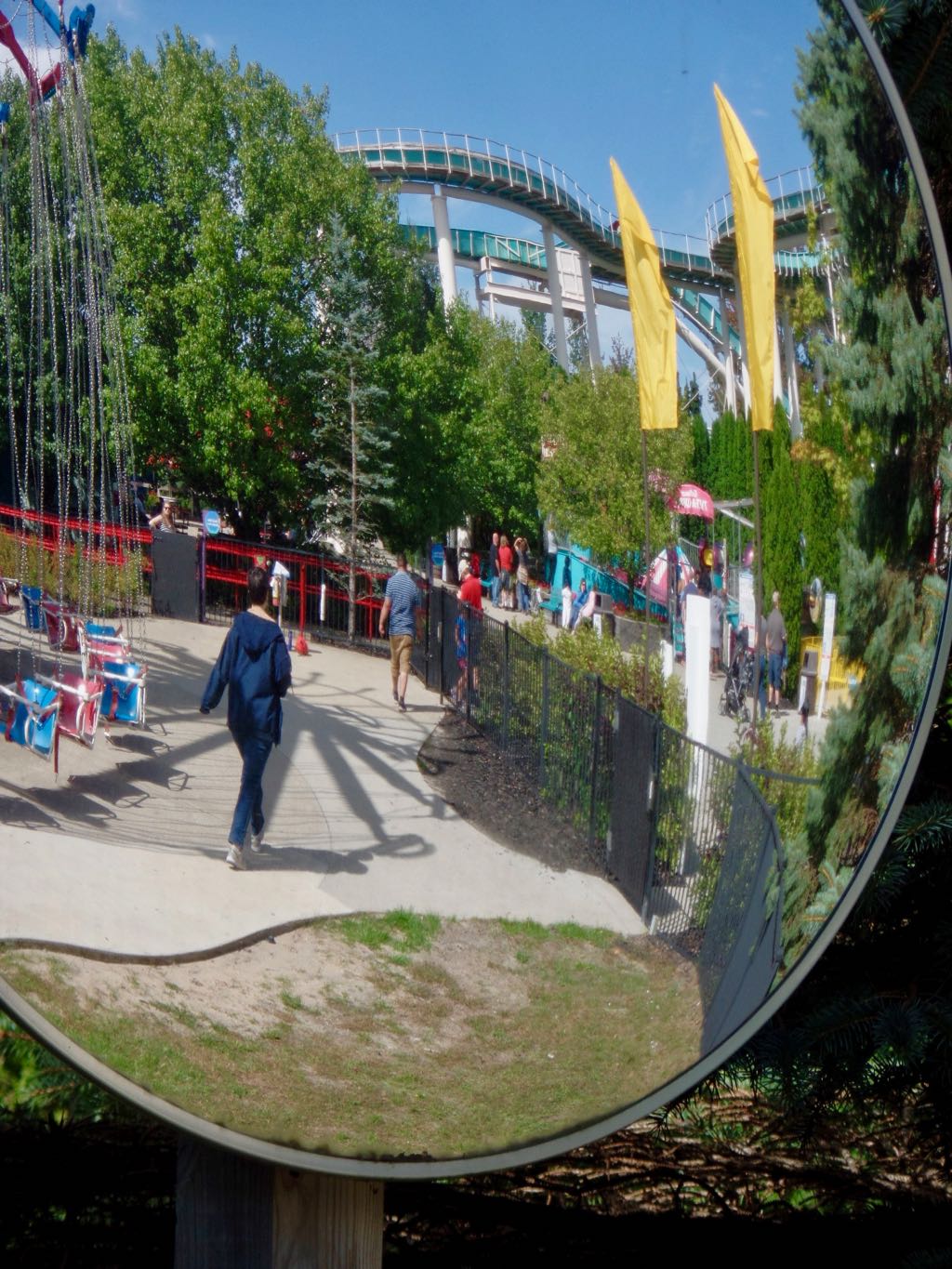 bunny_hugger, at the Flying Trapeze ride, seen in the safety mirror. Photographs in ride mirrors like this are one of her specialties and clearly I was going through a phase of imitating that. 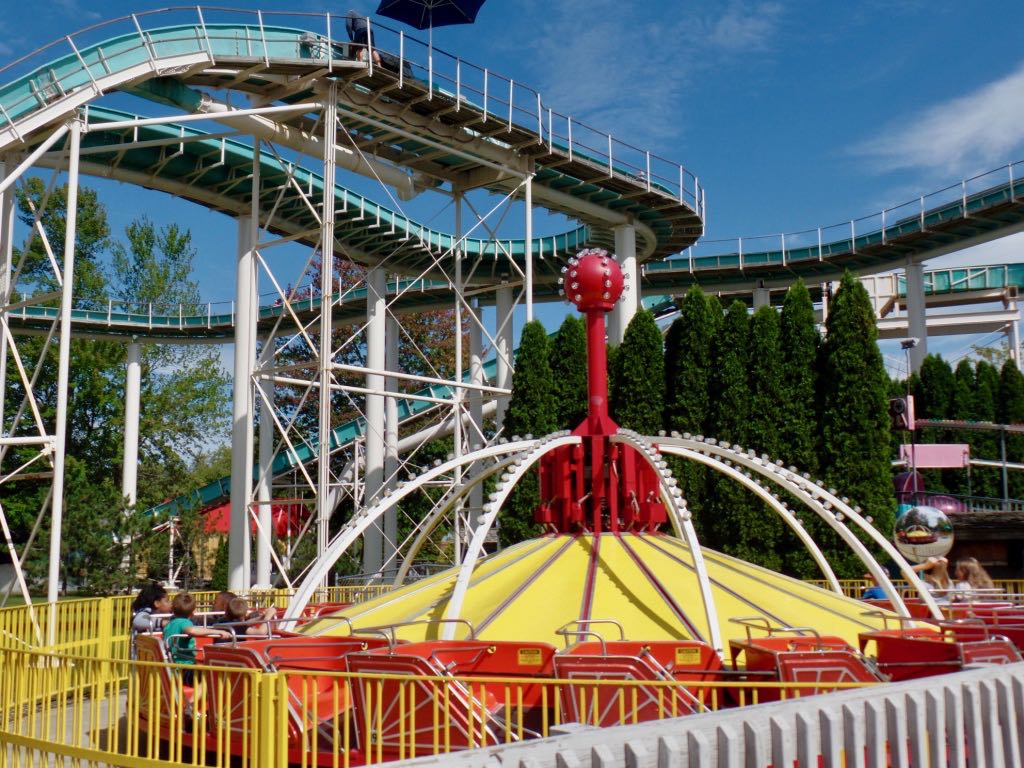 The log flume and the Trabant. ... Michigan's Adventure is usually a low-key place, especially the last weekend of the year when the water park is closed, as you can see from there being about four cars with occupants on the Trabant ride. My recollection is the operator told us which seats to use so that we didn't needlessly imbalance the ride. 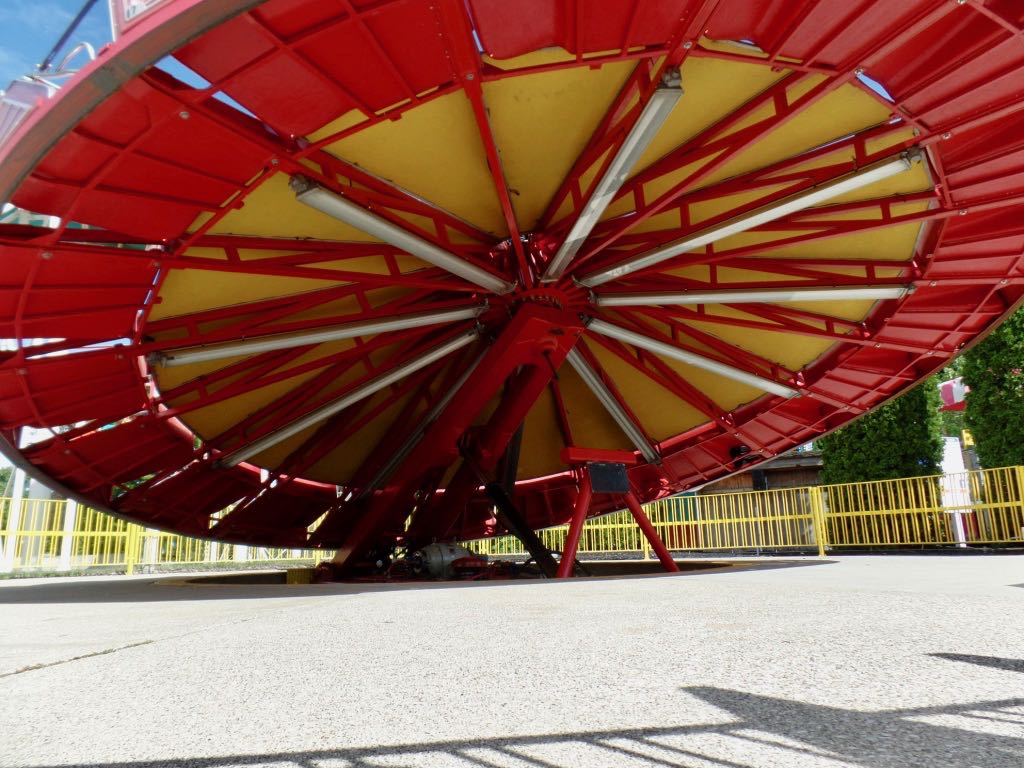 Trabant seen mid-ride. It gets a lot of nice complicated action for its ride. 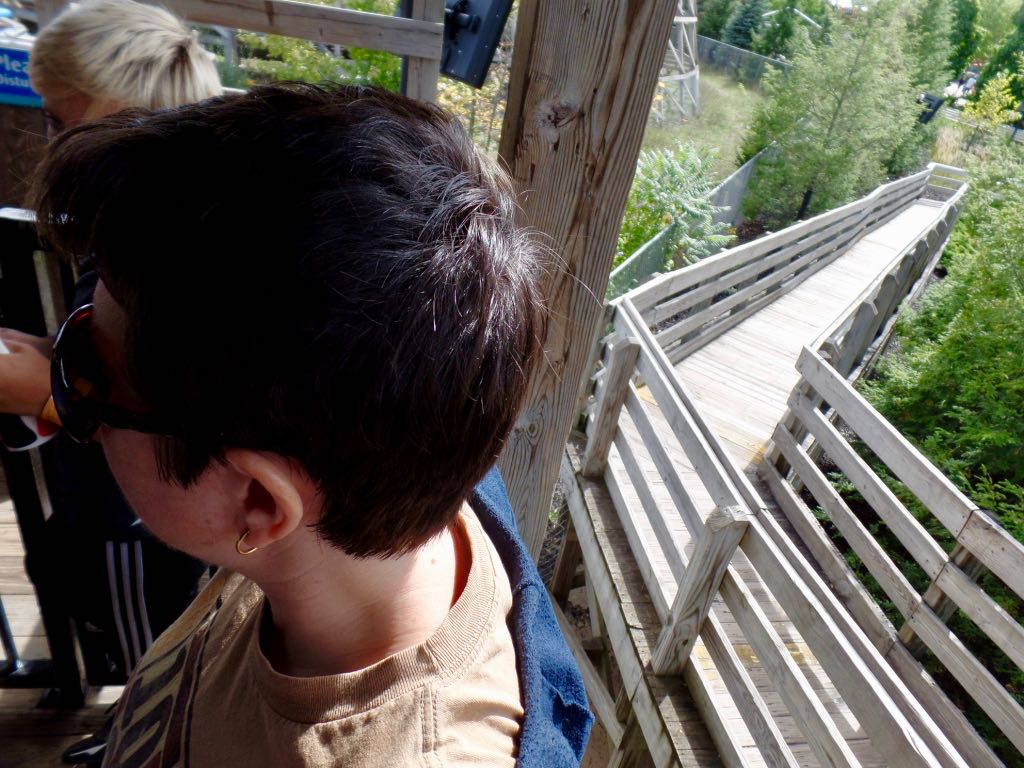 bunny_hugger waiting for a front-seat ride on Shivering Timbers, and the long ramp leading to the station. They have an incredible lot of queue space, although the most we've ever seen the place packed it only needed ... well, about as much ramp as you see here. But there's a whole mesh of switchbacks that could probably hold another 90 minutes of waiting. 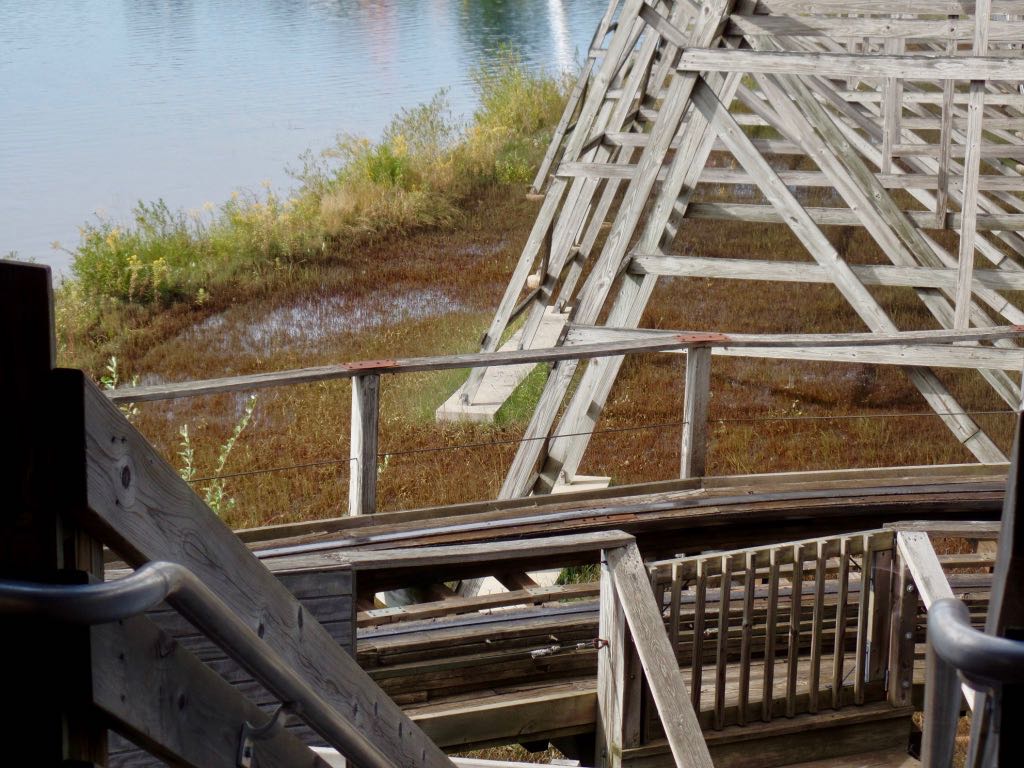 The base of Wolverine Wildcat, seen another week-plus away from the flooding. The lagoon is returning to its historic borders but the place is still pretty wet. 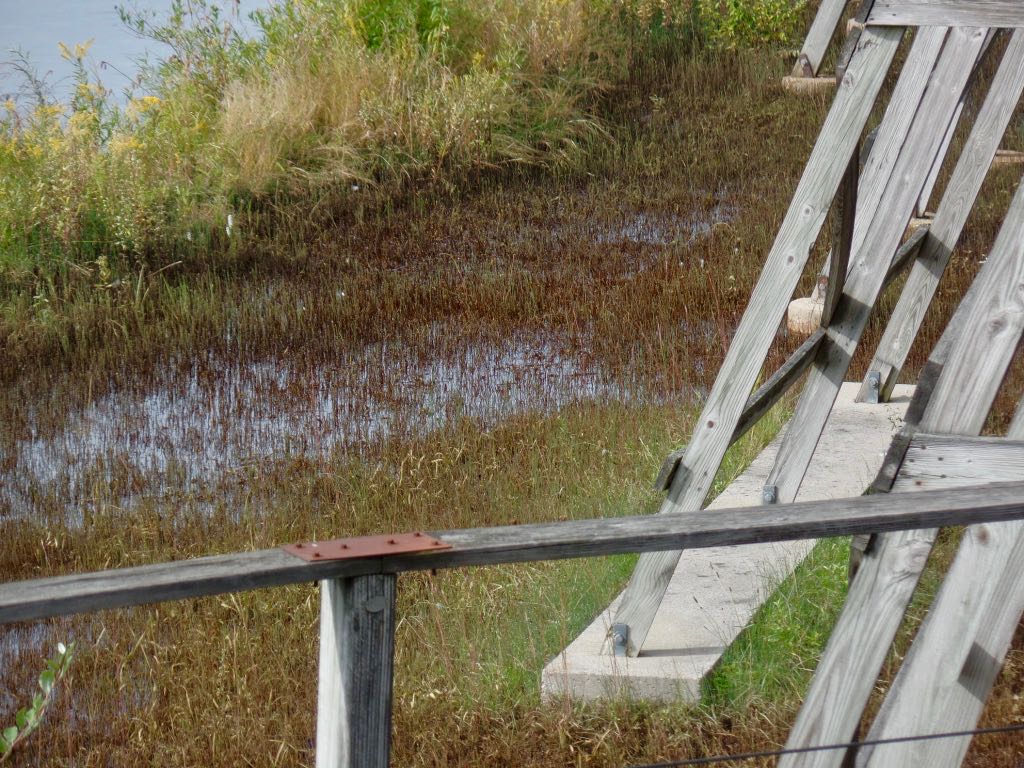 Really the land looks quite good at this water level, although I suppose it would be hard on the roller coaster if it were always like this.