Finally: Tuesday was our anniversary. And we wanted to do something special. We started with something not quite special but important.

bunny_hugger realized she couldn't remember when she last saw the crescent-moon earrings in the State Championship photograph I posted Monday night. This produced a search through the house for them, which ended finally when she found they were on the jewelry-holder where they were supposed to be, but slid down the wires and behind the base a little so that neither of us saw it the first three times we studied the thing. The important thing is she had them and they were in good order, and she still has them.

Our special thing to do, though, was go to a movie. It's the first real thing we've done, besides visit her parents, since the pandemic locked things down. In coincidental symmetry the last thing we did was go to a movie too. This time was a drive-in, at the Capri in Coldwater. I drove and noticed that the signal on my dashboard, that for weeks now has warned there might be a problem with my tire pressure monitoring system, went silent --- as in, no problem --- as we got away from Lansing, then returned as we returned. Hm.

The movies were a double feature, Ferris Bueller's Day Off and The Breakfast Club. We've seen both, of course, though it's been a while. They've aged, of course, generally with less catastrophe than I'd expected although there is a lot of sexual harassment in The Breakfast Club. You can say that's only what's true to high schoolers of that kind and in that era, but it's not like The Breakfast Club is about realism. The characters are about a quarter-inch away from being in one of those allegorical Twilight Zone episodes where the characters don't know they're dolls in a toy bin or a puppet show put on for Venusians about what Earth was like or something. It's also interesting in Ferris Bueller that the coldness and remoteness of Cameron's Dad is such an informed attribute; if his father appears at all, it didn't stick in our memory. It makes the end of Cameron's plot feel out of balance. But if a movie's perfectly made it's probably also less memorable. Effective art may need a few things you can quarrel with.

The Capri was looking in good shape. We couldn't remember how long it was since we'd been there. They still had the pre-show trailer for Westlund's Apple Market in Lansing, and it was still funny, although it used a different comic aspect than before. It no longer urges you, if you live in Lansing, to visit Westlund's, and if you don't live in Lansing then move there now. The new ad, though, does close with Westlund's location and logo superimposed over Apollo 11 moonwalk footage for some reason.

bunny_hugger gave to me a bronze commemorative coin (the 8th being the bronze anniversary) and a shadowbox she'd made to preserve our wedding boutonnières. They've been hanging precariously over the kitchen sink long enough. I gave to her a model of Kings Island's roller coaster The Beast, and a T-shirt commemorating Fantasy Island amusement park, which turned out to be a size or two too small. (It turns out women's t-shirt sizes are hard.)

It was not our most thrilling of anniversaries. But it was a happy time spent together and that's all that we ever truly want.

And on my mathematics blog, Using my A to Z Archives: Cantor's Middle Third, pointing you to a piece I like. Thanks for reading it, if you do.

I'm up, now, to the next big Last Thing Before The Pandemic. In this case it's Motor City Furry Con 2019, the first held in the new hotel that we had hoped would start to feel less alien and strange this year. Here's pictures from Friday, the first day of the convention, to which we got late because of work obligations as I remember. 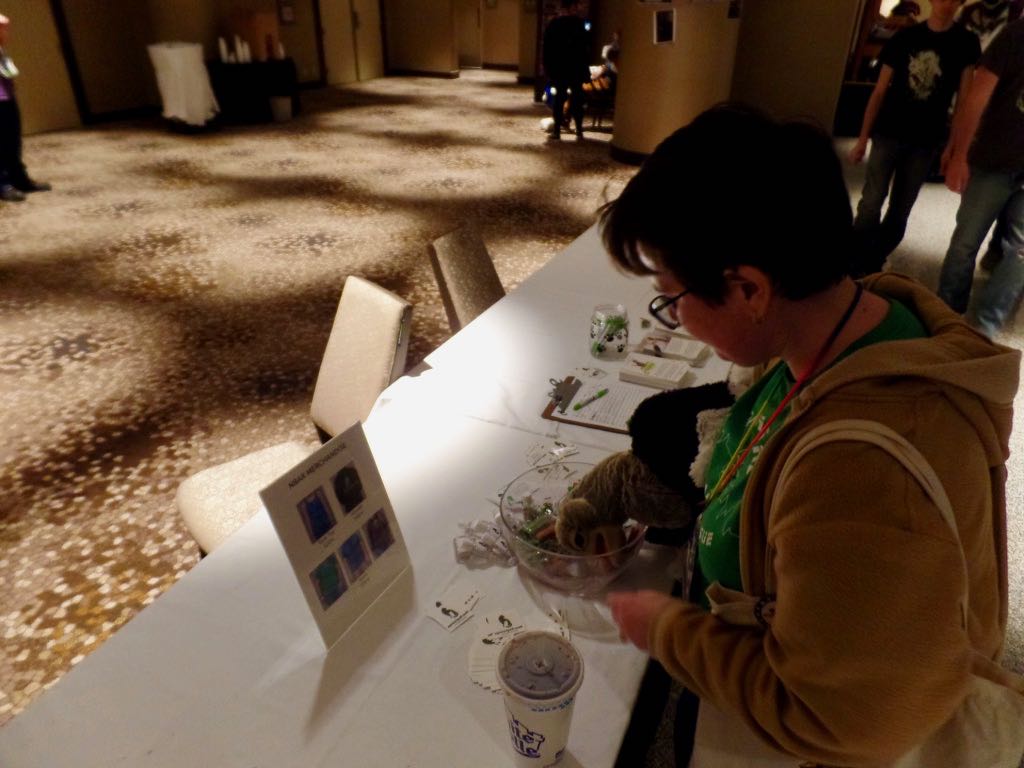 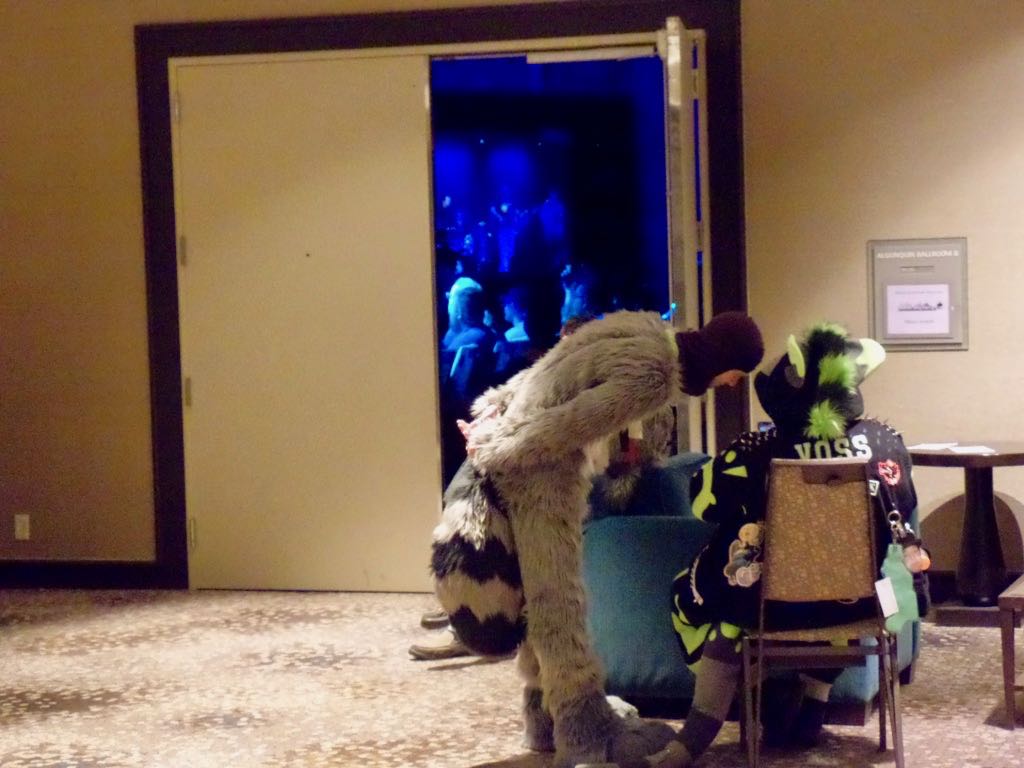 I think of 2019 as the year that the old tradition of ``never take off your head in public'' completely vanished from fursuiters. Here, a headless raccoon peeeeeers at something or other. 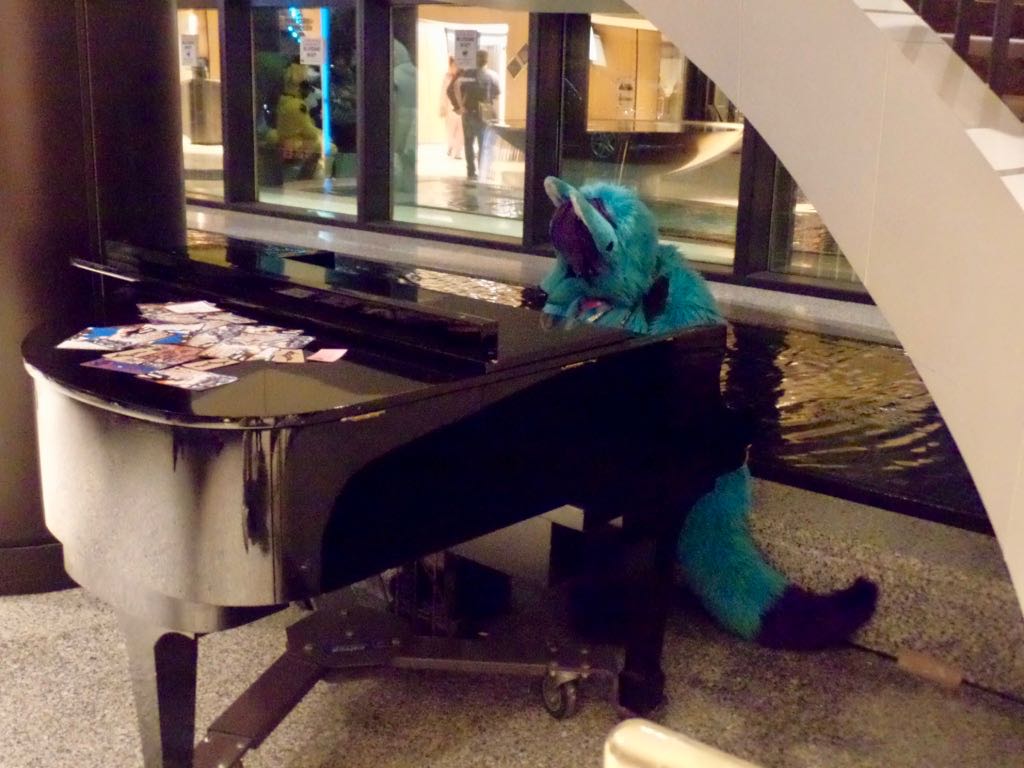 The new hotel's long common space had this piano conveniently near a water fountain, so people could sit down and play and drag their tails into the water. I never saw that last bit happen, but I don't see how it's possible that it did not. 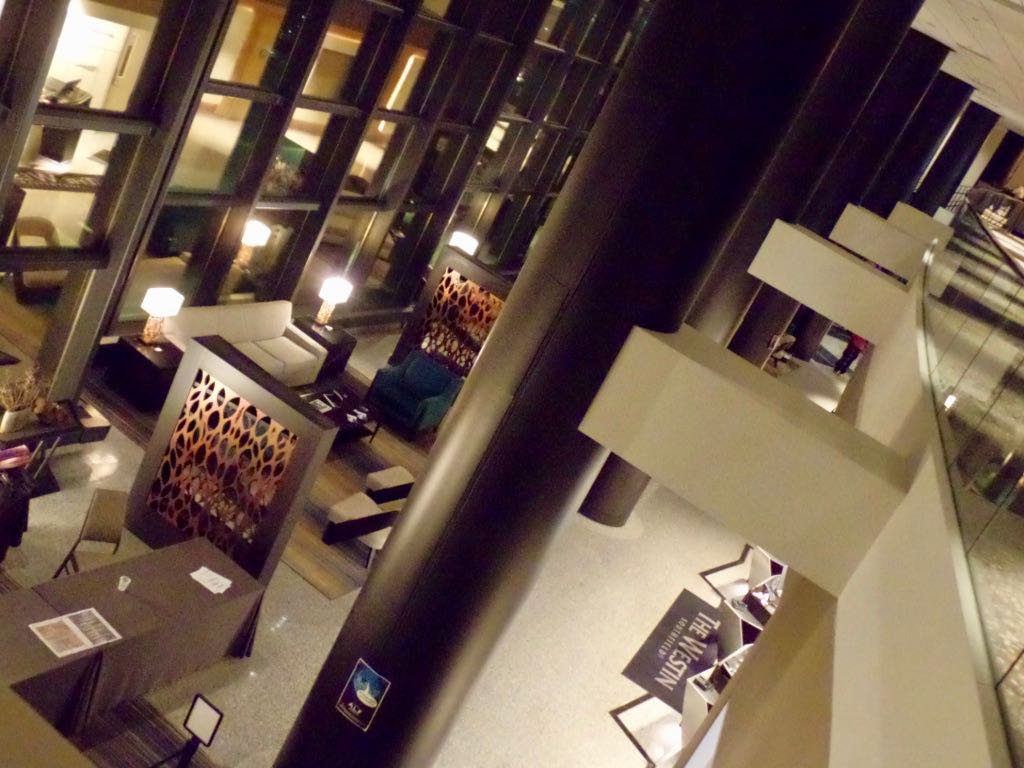 The common lounge area of the new hotel, seen from the second floor. It's an abundance of space, although I hadn't figured out the clear gathering points yet. 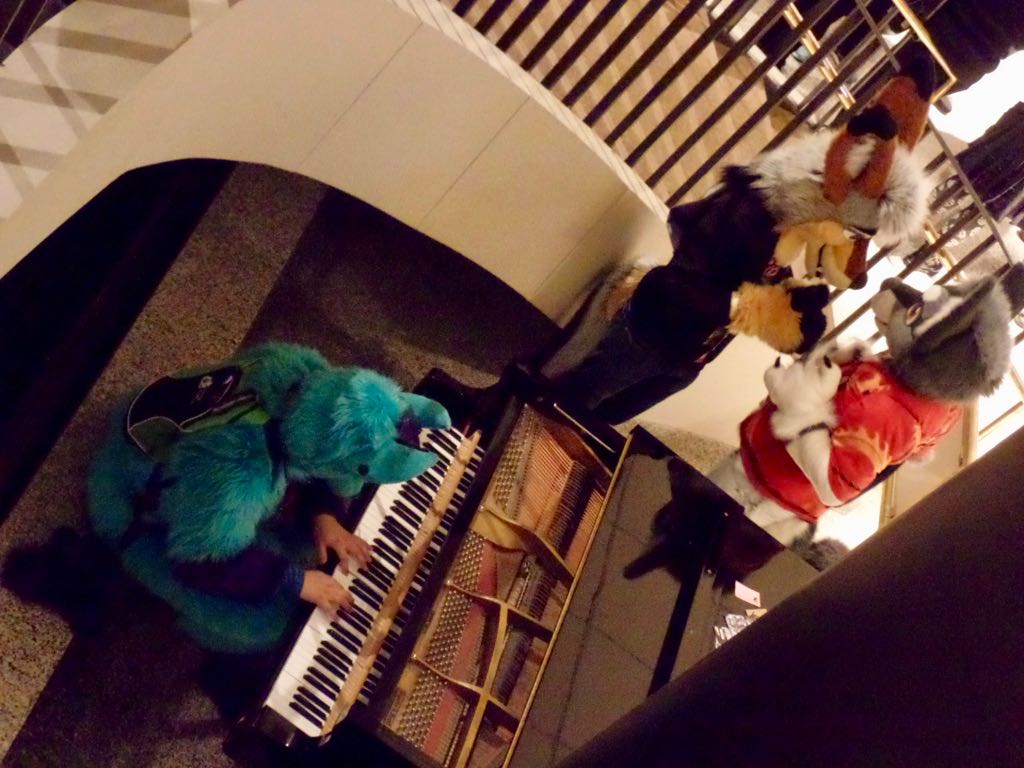 Looking down at the piano. Well, that explains how you can play the keys in fursuit. 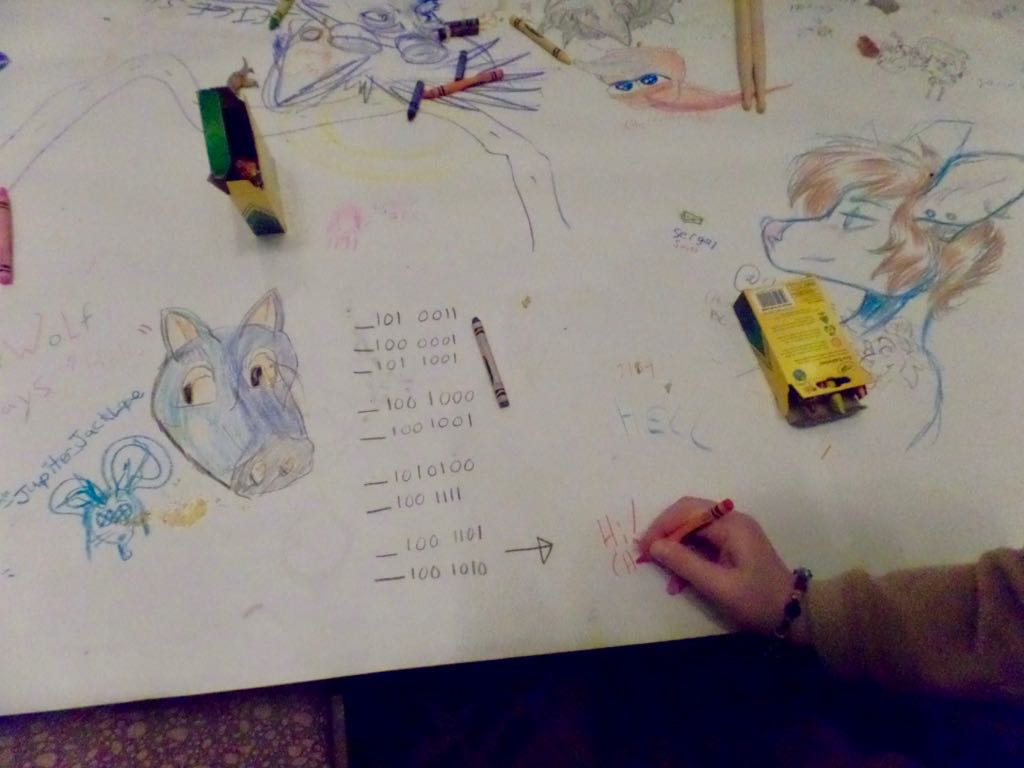 Hospitality was covered with long sheets of paper, and boxes of crayons for folks to write messages. Can you decipher the binary coded message here? 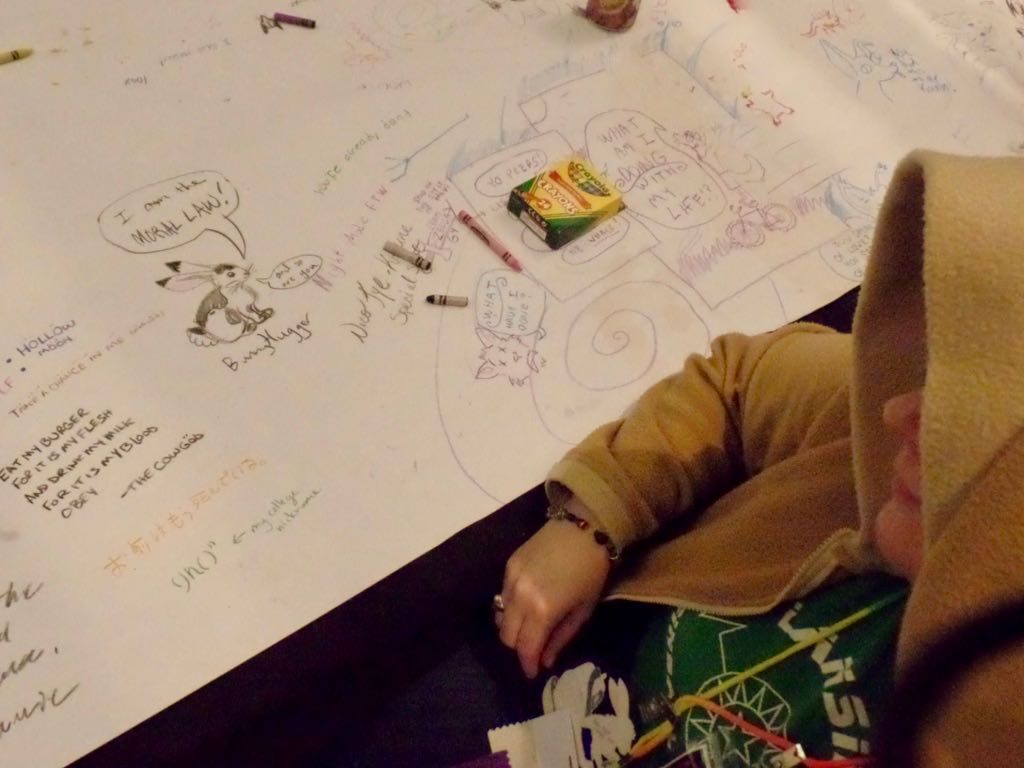 bunny_hugger does a quick self-sketch and reminds us of one of those truths. 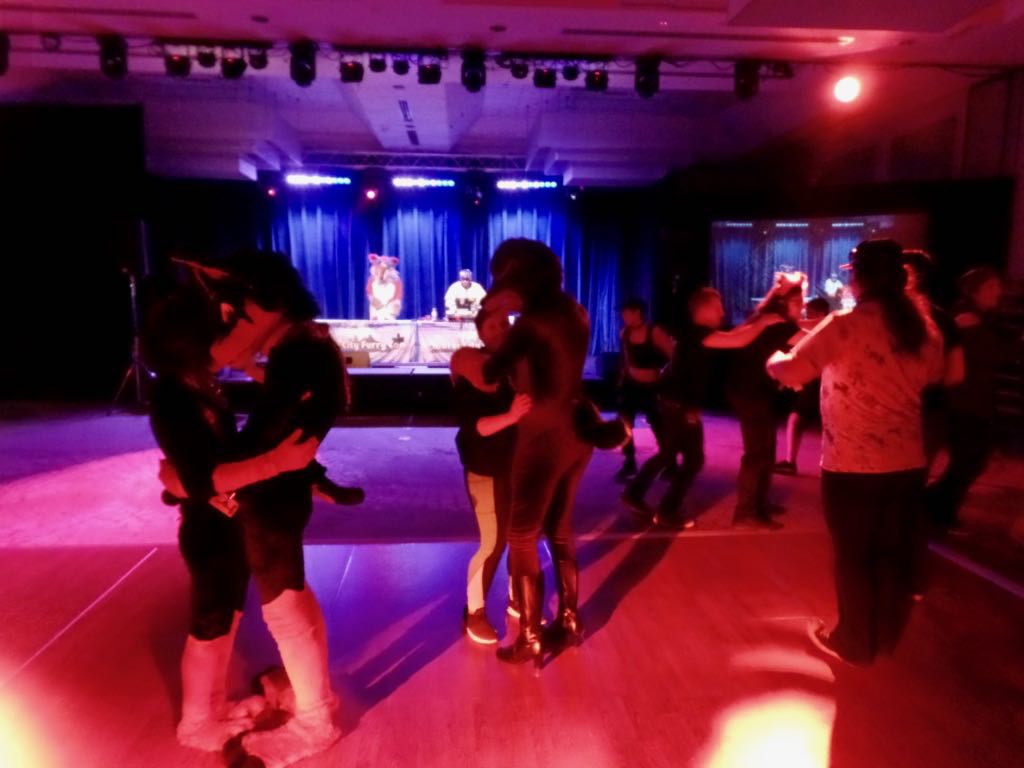 The Friday Night dance held strong. It wasn't the busiest dance out there, but it was a cheerful one. 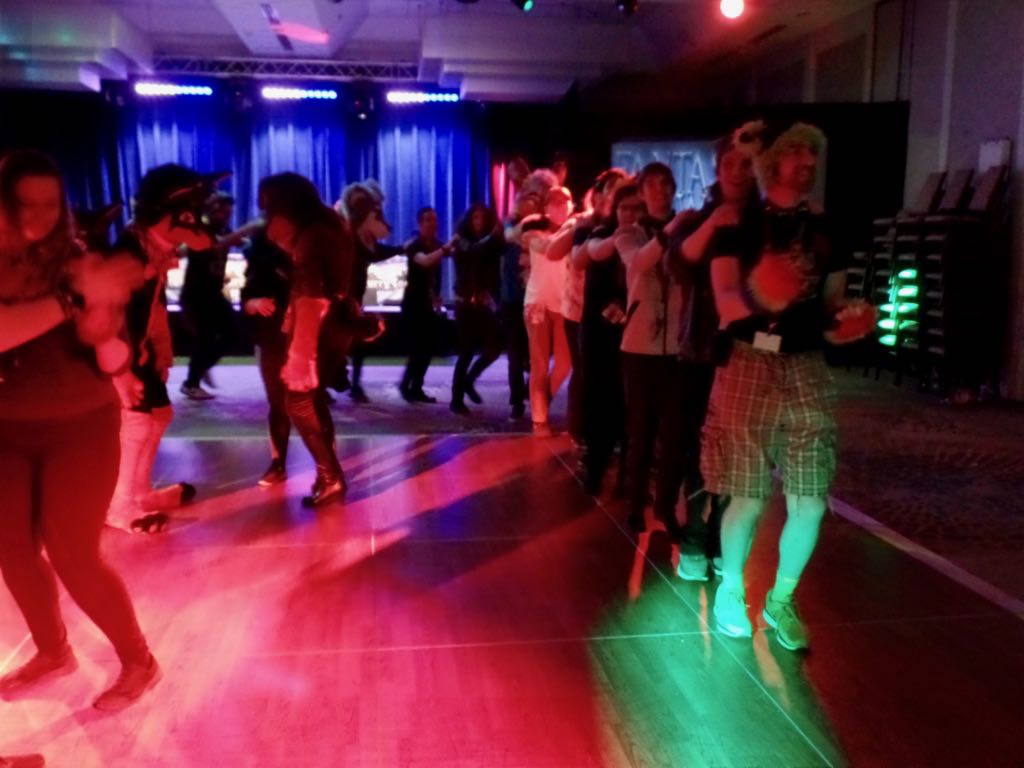 And the dance could still break out into conga lines.

Trivia: 19th Century French theater claques, audience plants meant to juice the reactions to plays, were specialized among rieurs, laughing at comedies; bisseurs, calling for encores; commissaires, who would nudge their neighbors that a good part was coming; and pleureuses, women who would weep at the dramatic. Source: Know-It-All, A J Jacobs.

Currently Reading: Miscellaneous Harvey comic books sent me by a friend, because there's another box of them.