I have a new device! A decade and a month or so after buying a first-generation iPad, I plunged boldly into ``tablet computers that have received any kind of update since 2013'' and got an iPad Pro. Not used, but one that a friend had, surplus to requirements, and was willing to sell, along with Apple Pencil and Smart Keyboard. Also all the original packaging, a thing that I can quite relate to The friend also hit some kind of USPS jet stream, sending it out on Saturday and the thing arriving this morning.

I'm, of course, nervous about this as I am with any big purchase. Also since my laptop kernel-panicked, which should just be a fluke but, after all, my previous computer went from one kernel panic to complete death in the course of about a week. While I've felt flush with cash, thanks to not paying for all these pinball nights, I'm not that flush and it's not like I can pick up extra money by tutoring.

Still! It's a handsome-looking thing, 10.5 inches, in that rose gold color that matches

bunny_hugger's computer. It seems to be linked up to my accounts and I've downloaded some of the apps that I'd had on my old iPad. I haven't yet explained to my old iPad that it's facing retirement, but I'm sure it had to know something was up since it's been like 2017 since they last made any app that would even load on it.

Now some more pictures from the VFW Ann Arbor Pinball Museum Etc, as seen in May of 2019. 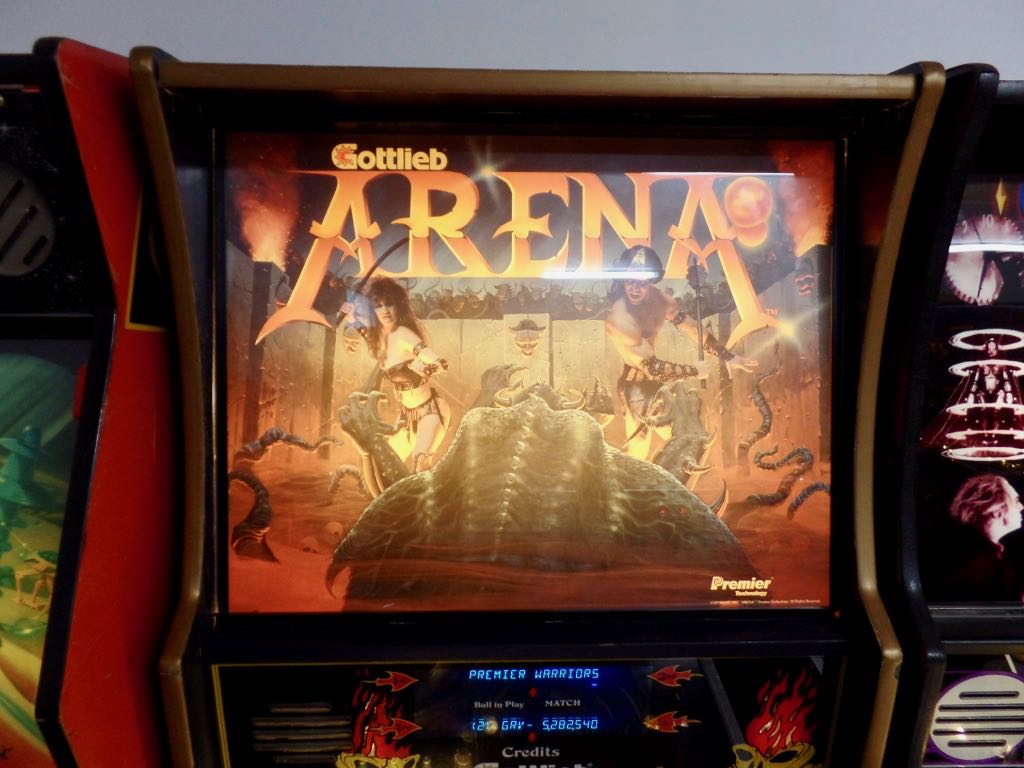 Backglass to Gottlieb's late-solid-state Arena, which is a promising theme at least. 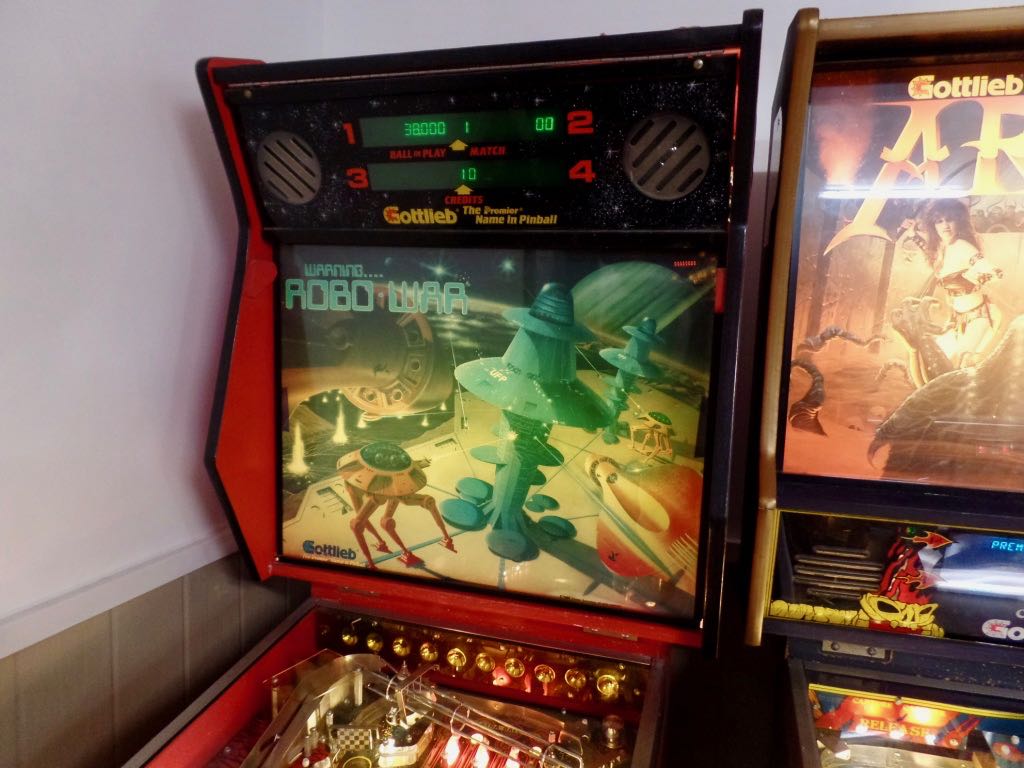 Ah, but Robo-War, or possibly Warning..... Robo-War, definitely looks like the cover of a 1950s science fiction classic reissued in prestige-ish format in the 90s. 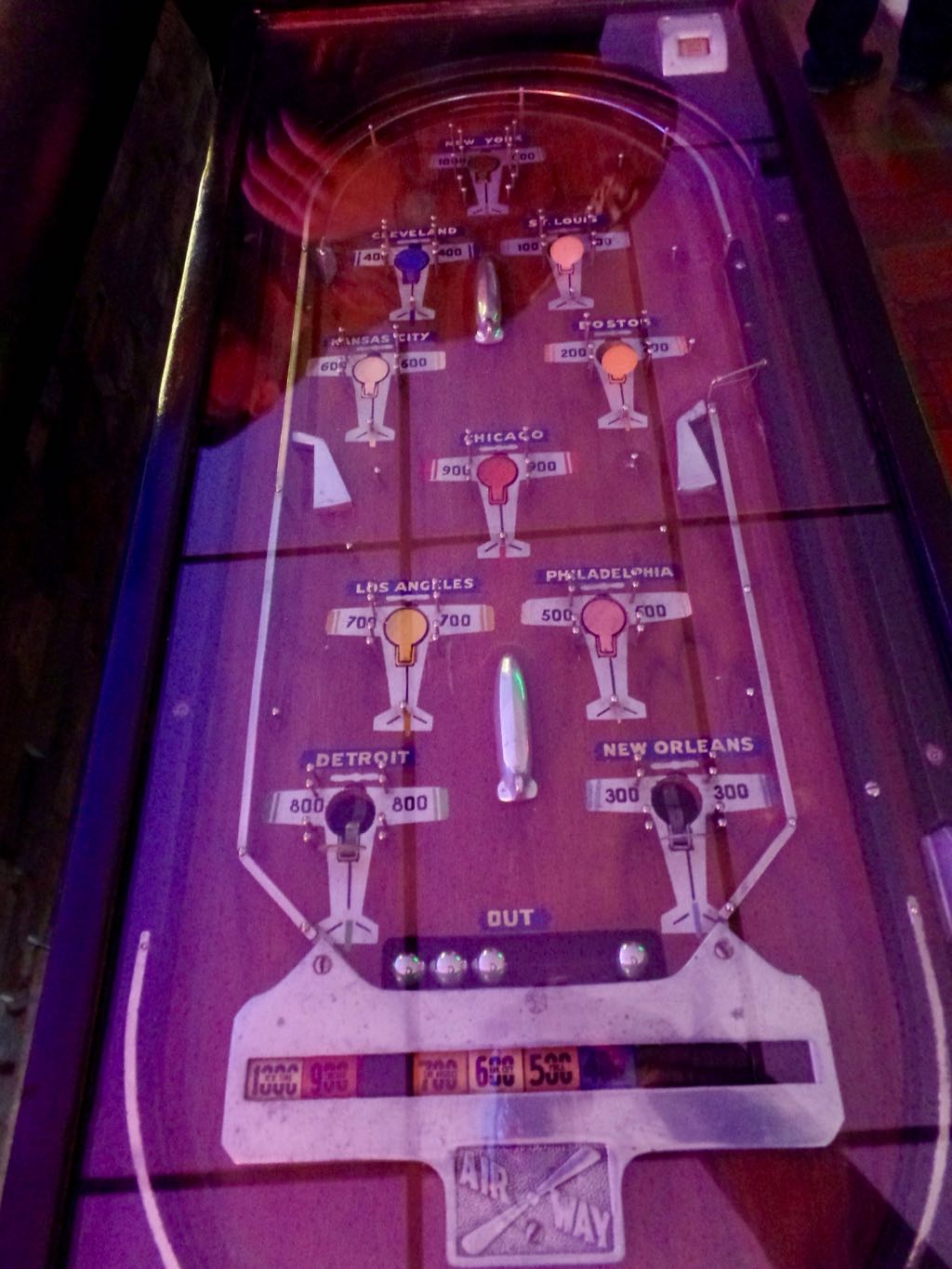 Bally's 1933 Air-Way, which the Internet Pinball Database credits as having the first (non-electric) score totalizer. As you hit targets a score flag at the bottom of the game flips over. You can see some of those flipped over at the bottom. 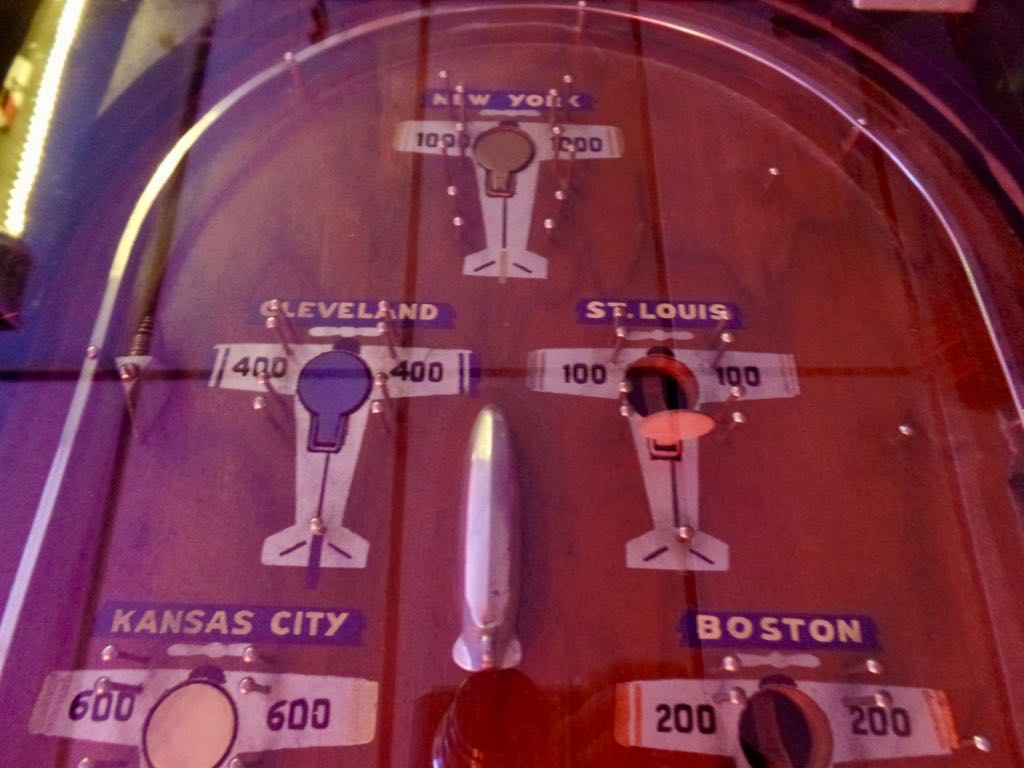 So if you get a ball to drop down the open hole (as at St Louis or Boston here), the ball's gobbled up, you get the corresponding number of points and the little door slaps shut so that, for example, a shot into New York will keep going and maybe hit the zeppelin or something else. 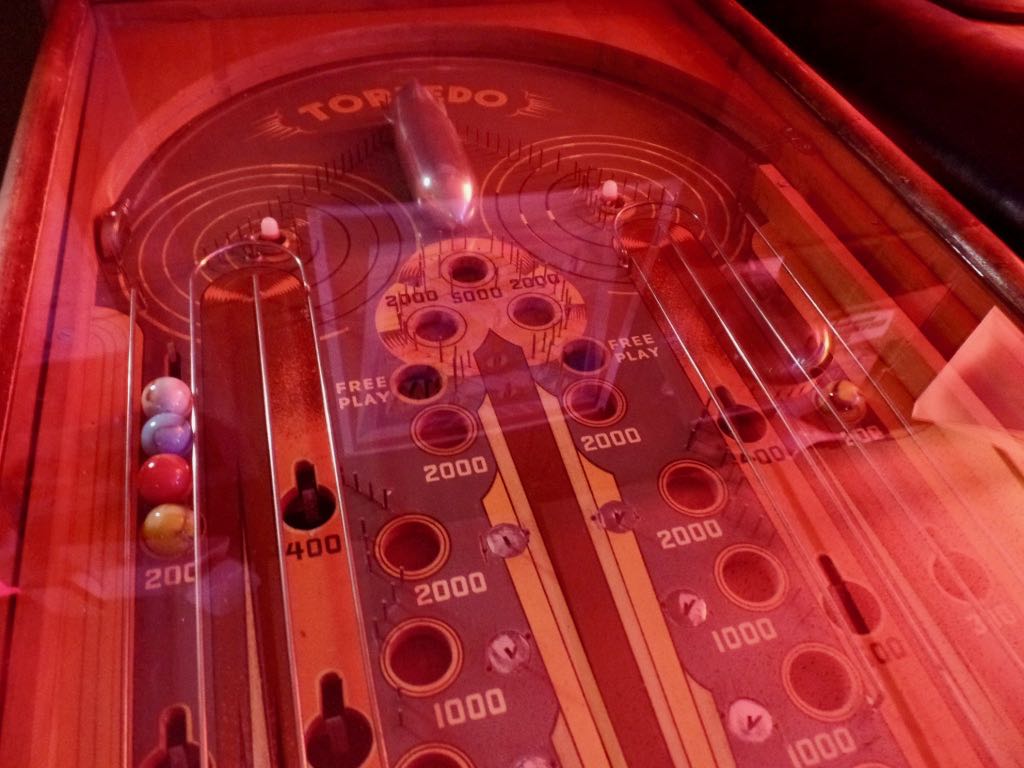 Back to the pure mechanicals. Here's Torpedo, made around 1934-36 by possibly Rube Gross of Seattle, or J H Keeney of Chicago. The Internet Pinball Database has pictures that definitely match the Rube Gross game. The baffling thing here is there's an arch of pins around the torpedo up top which seem to block off the whole center playfield. Nobody had any idea how to get to, like, the 5000-point shot in the center. Dropping something into the torpedo seems obvious, but that just led to an under-the-table path and ball drain. 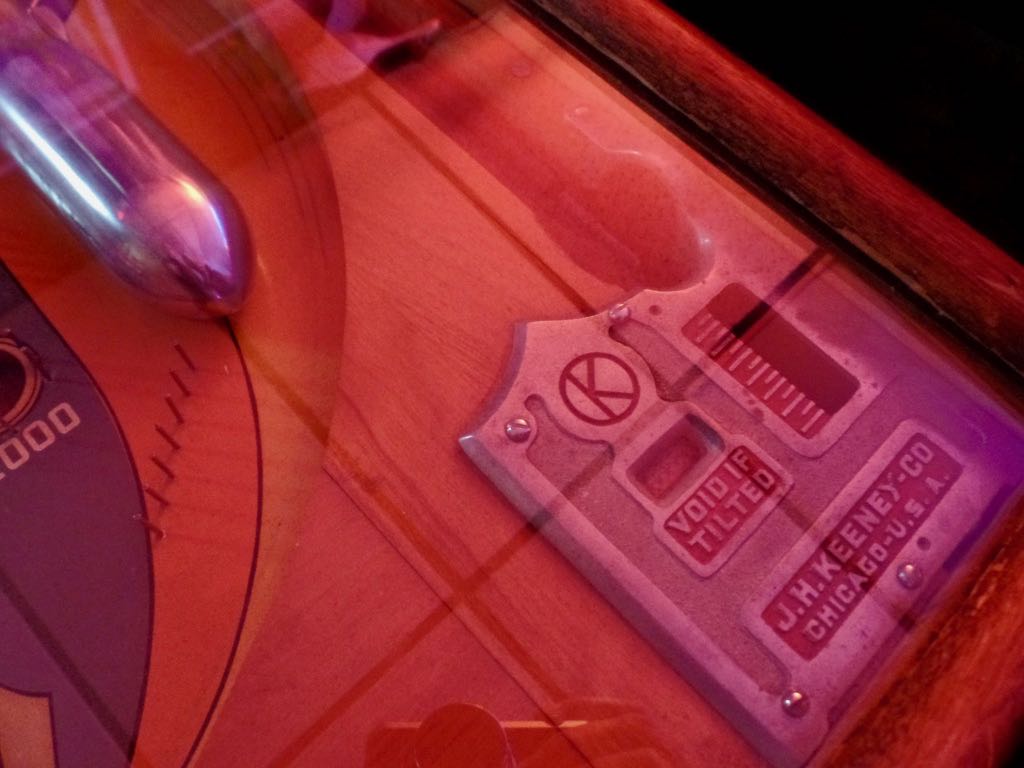 Note the tilt mechanism has changed to a flag that shows red if the game tilted. The plate definitely credits the Keeney company, but if there's any link between them and Rube Gross I don't know it. 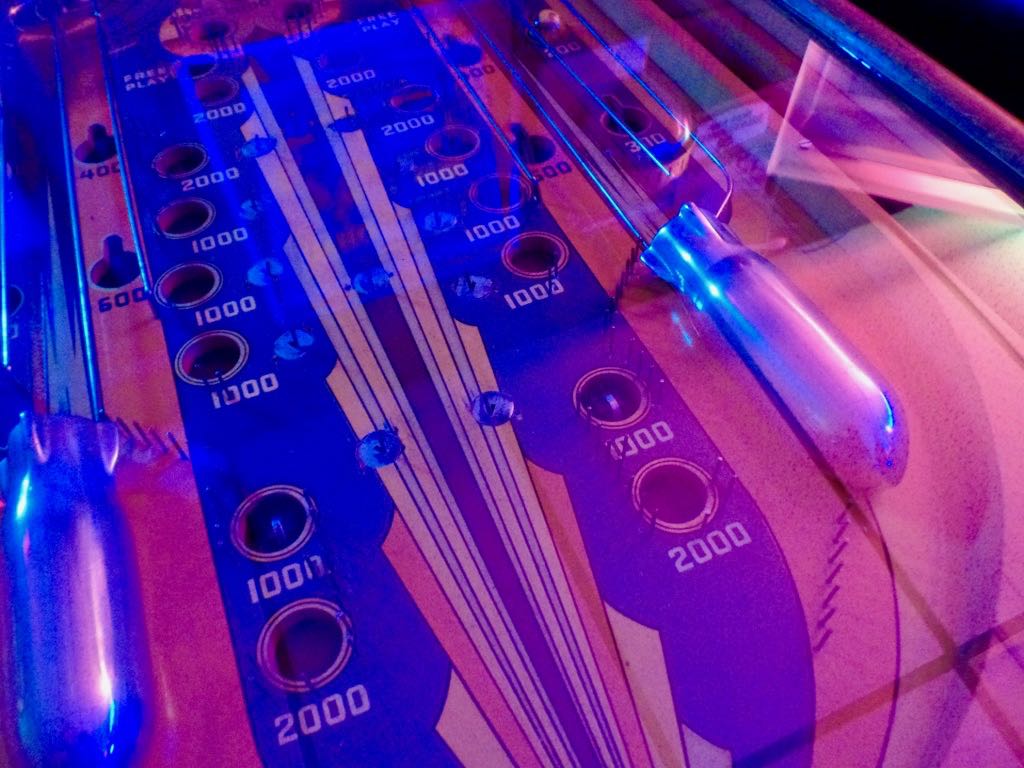 The inaccessible, but so-valuable, center playfield of Torpedo. I even called over GRV, who's under a fairy spell compelling him to explain the rules of any game ever made, and he couldn't help. 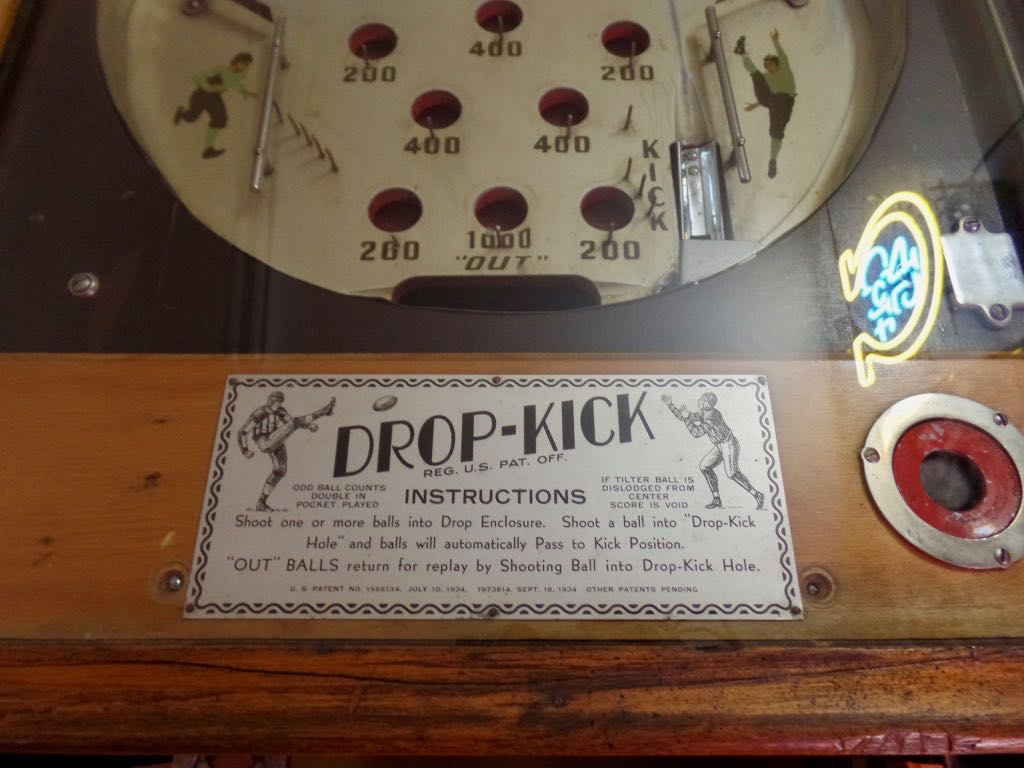 Exhibit Supply Company (Chicago)'s 1934 Drop Kick, which the Internet Pinball Database claims is electromechanical although I can't think what would be electric on the thing. 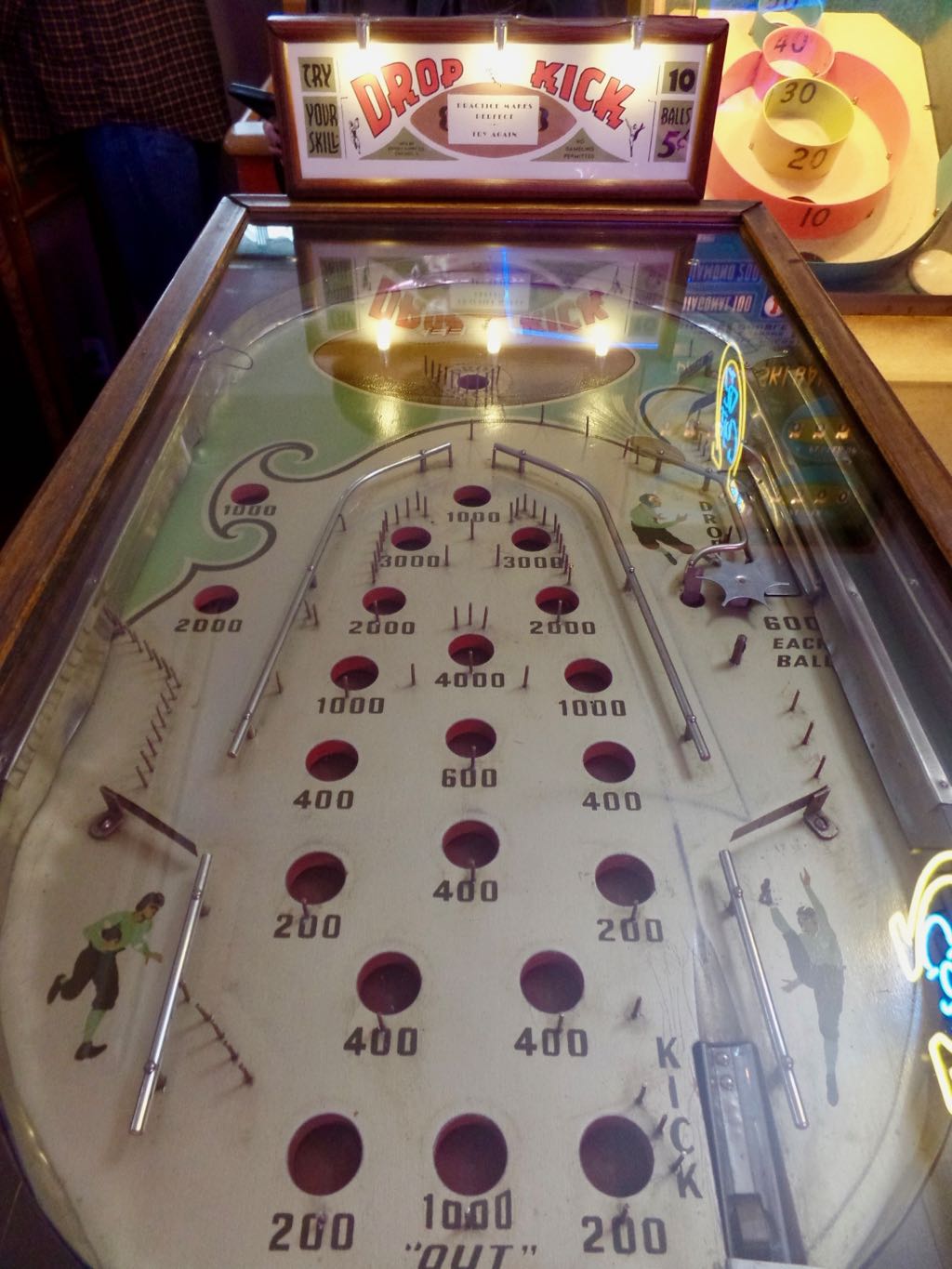 Way up top there the sign encourages, ``Practice makes perfect - Try Again'. Notice on the right that there's a little turnstile, which lets you lock balls and get them released later. 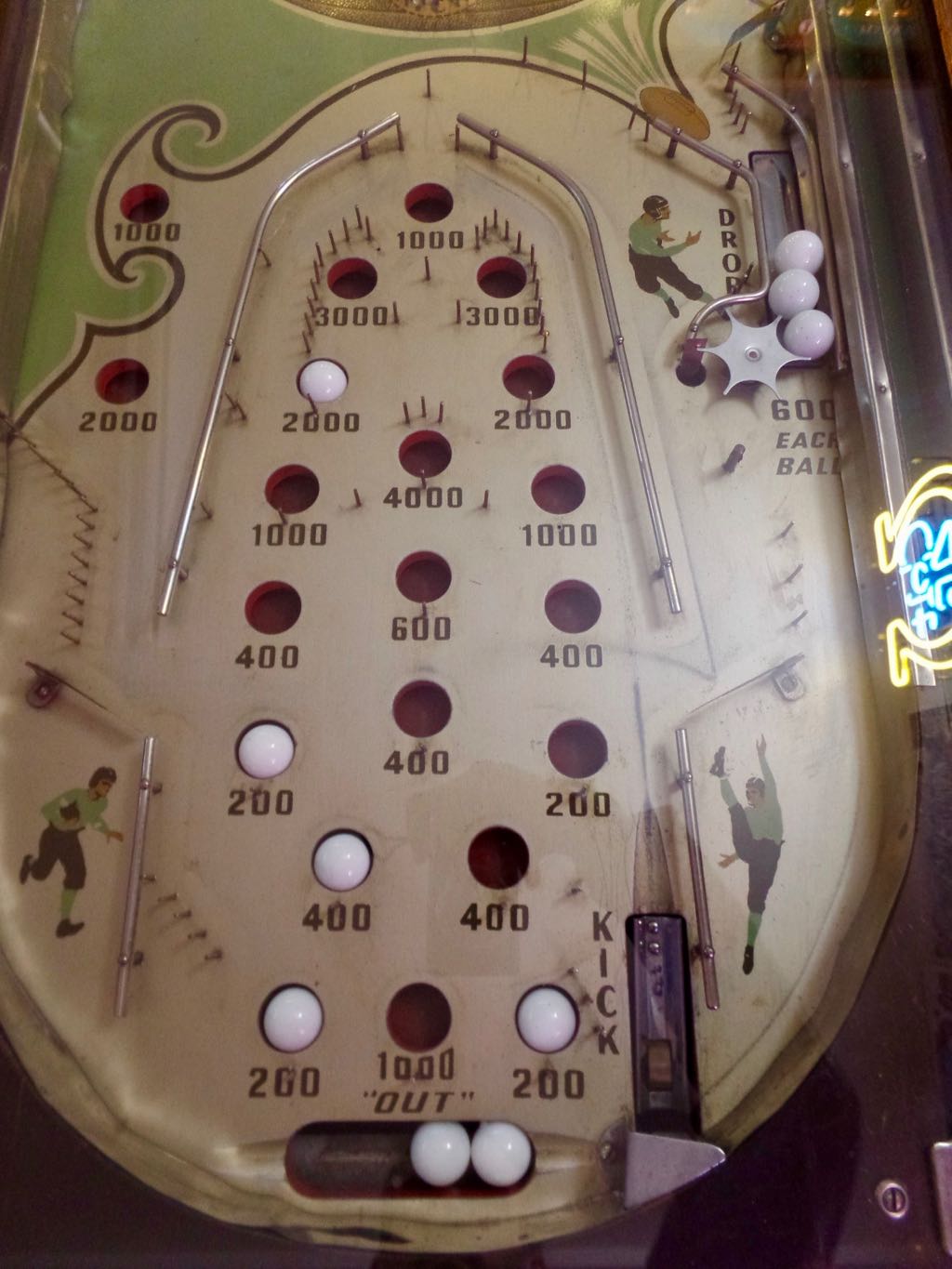 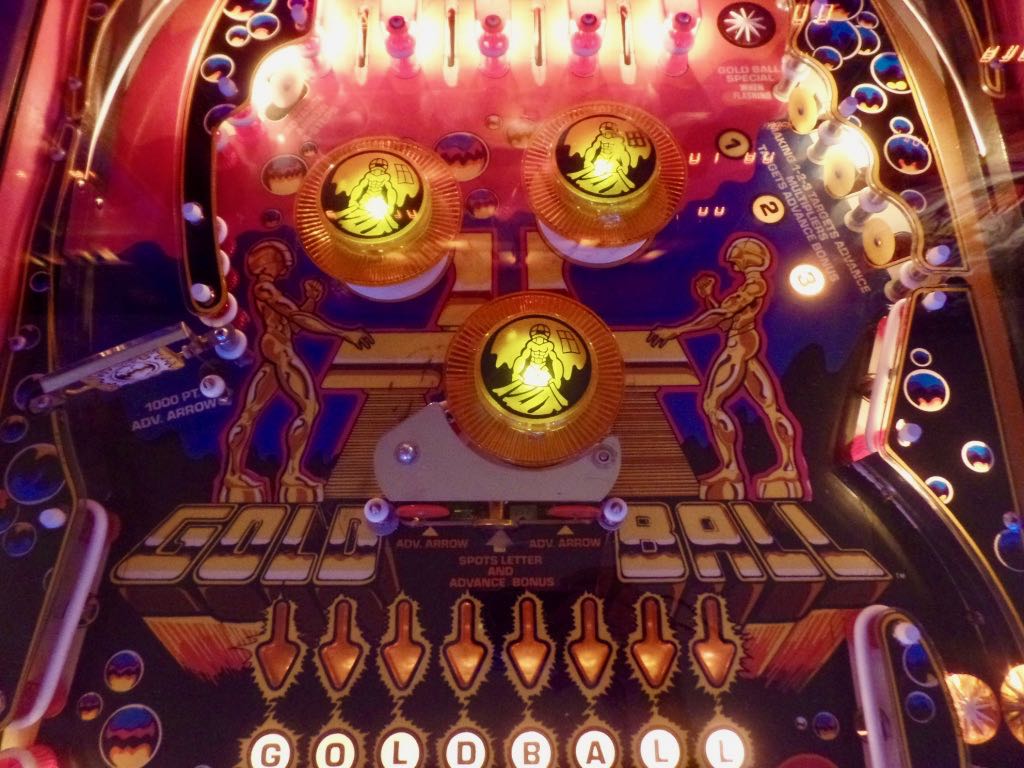 Playfield of Gold Ball, a 1983 Bally Midway game that wants to get you to think of Silverball Mania, and other stuff that's clearly about pinball life. Or, as implemented, to make you think of being caught head-to-toe in a thick gold-colored rubber suit. So, you know, something for everyone. 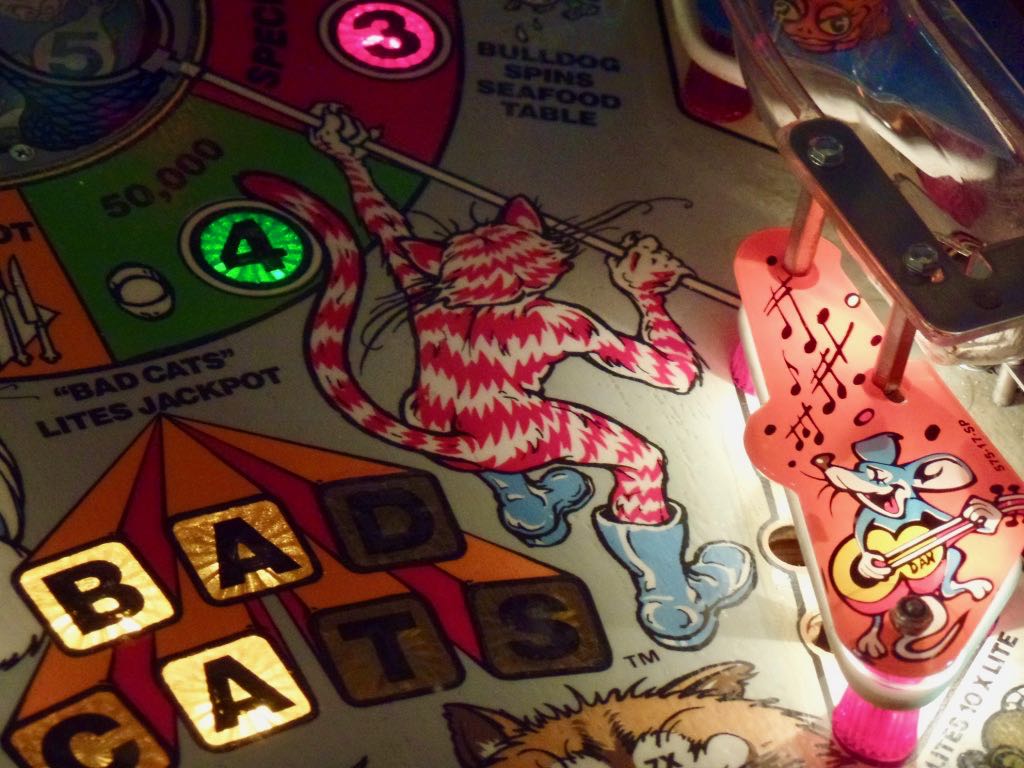 Bit of detail from Bad Cats, a game I really like. It's showing off a guitar-playing mouse, and of course that lightning-striped cat in boots.

Trivia: The earliest recorded pairing of a specific date and a day of the week seems to be a 2nd century AD manuscript by Vettius Valens, which described how to determine the day of the week for any particular day. He used as a basis the ``first year of Augustus'', assumed to start on a Sunday. This refers to the era of Augustus's reign in Egypt, the year after his victory of Mark Antony at the Battle of Actium, so the date was the first of Thoth in 30 BC, which was either the 30th or 31st of August. Source: Marking Time: The Epic Quest to Invent the Perfect Calendar, Duncan Steel. It's impossible to be sure: the leap year rule Julius Caesar had instituted was not being reliably followed in this era, and it is not clear when August moved from 30 to 31 days.