There's absolutely no significance to the subject line here. It's just our movie night this week was The Daydreamer. It includes some songs that Murray Laws would reuse for honestly better productions, and if I'm calling Twas The Night Before Christmas the better production you know where The Daydreamer stands. I mean, The Daydreamer has some good segments but the story, of a child Hans Christian Anderson having fantasies that foreshadow some of his stories, just ... rrgh. You know how Disney's The Sword In The Stone has a bunch of loosely connected adventures with Merlin occasionally saying ``And that's why education is important'', even though the story does not support that moral at all? The Daydreamer does a lot of that. It's the kind of flopped movie with a confused moral that I could probably do a lot of thinking about.

In May 2019 we went with MWS and K on an early-season trip to Cedar Point. The park had only opened the week before and this was the earliest in a season we'd ever gone to Cedar Point. It was a great experience. We'd love to do that again. 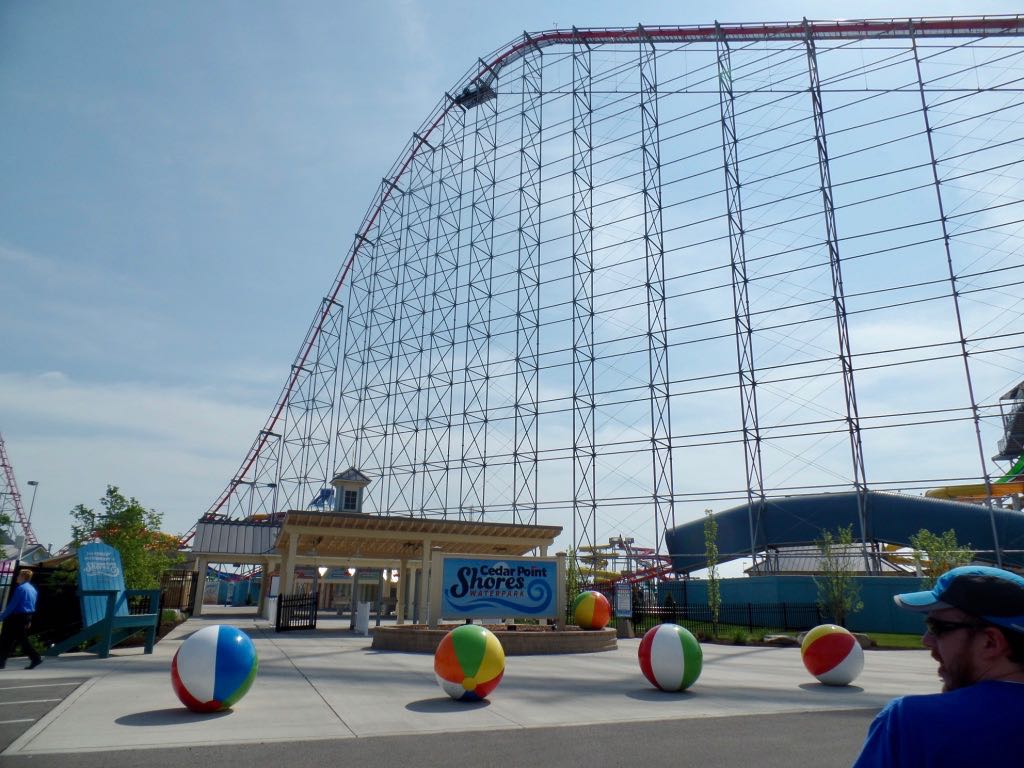 The entrance to Cedar Point Shores, the water park and formerly named ... oh, something else. And a view of the Magnum XL-200 roller coaster behind it. We don't see this view much; MWS parked us in the water park's lot, still a legitimate one to use, just one we'd never tried ourselves. 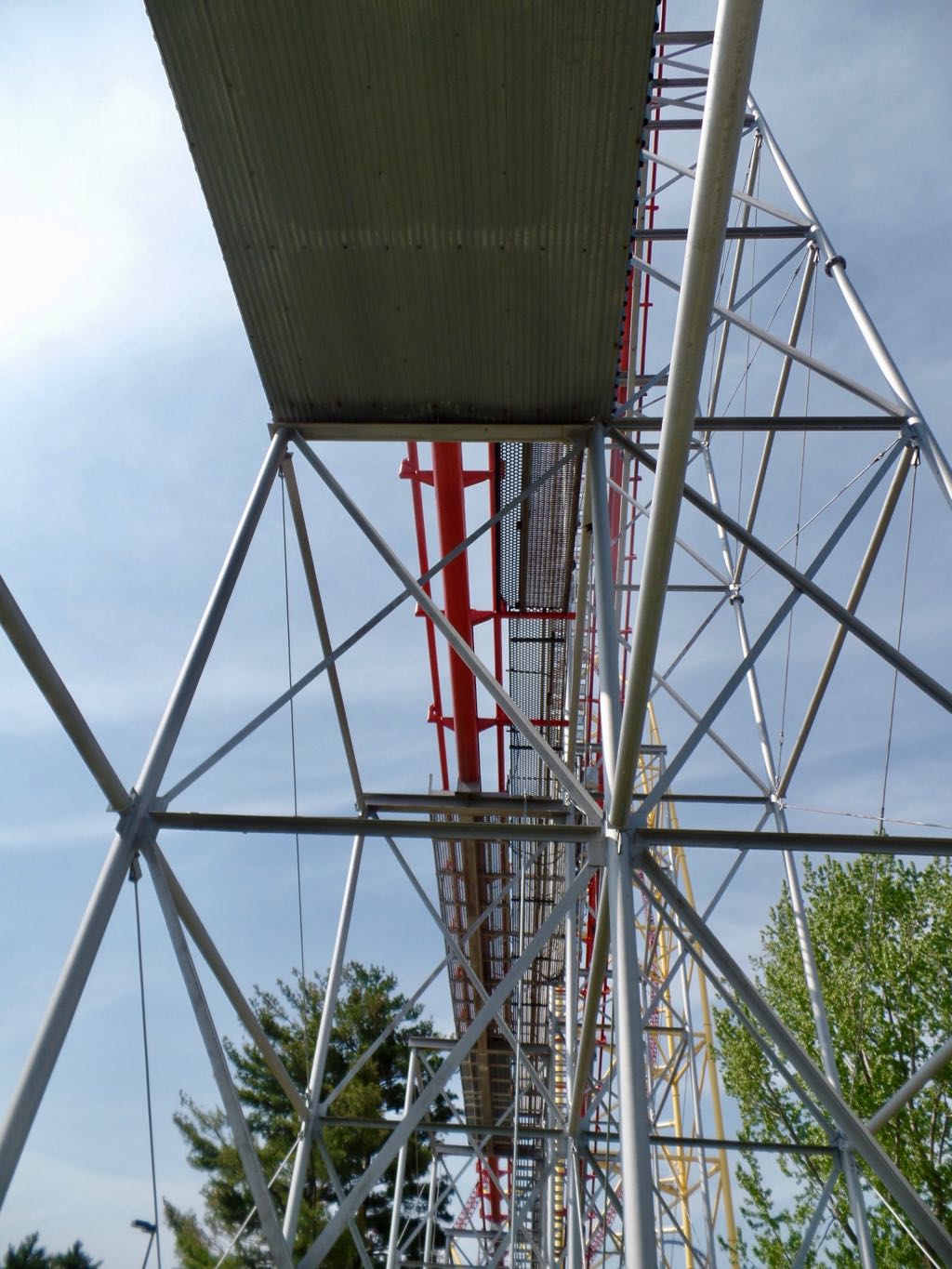 Magnum's lift hill as seen from underneath. It's going up as you look farther down the photograph. 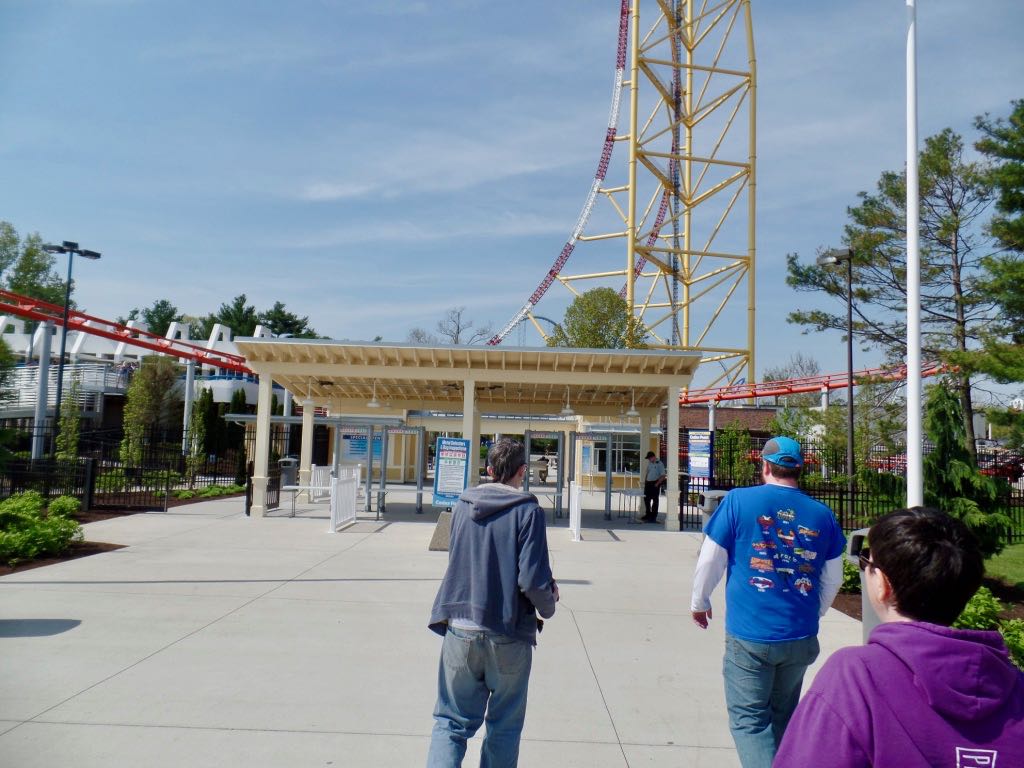 The Hotel entrance to Cedar Point, the one we always use when we're at the park for Halloweekends, only here, it's a nice May day. ... Well, still a little cool; notice

bunny_hugger has a lightweight hoodie on. 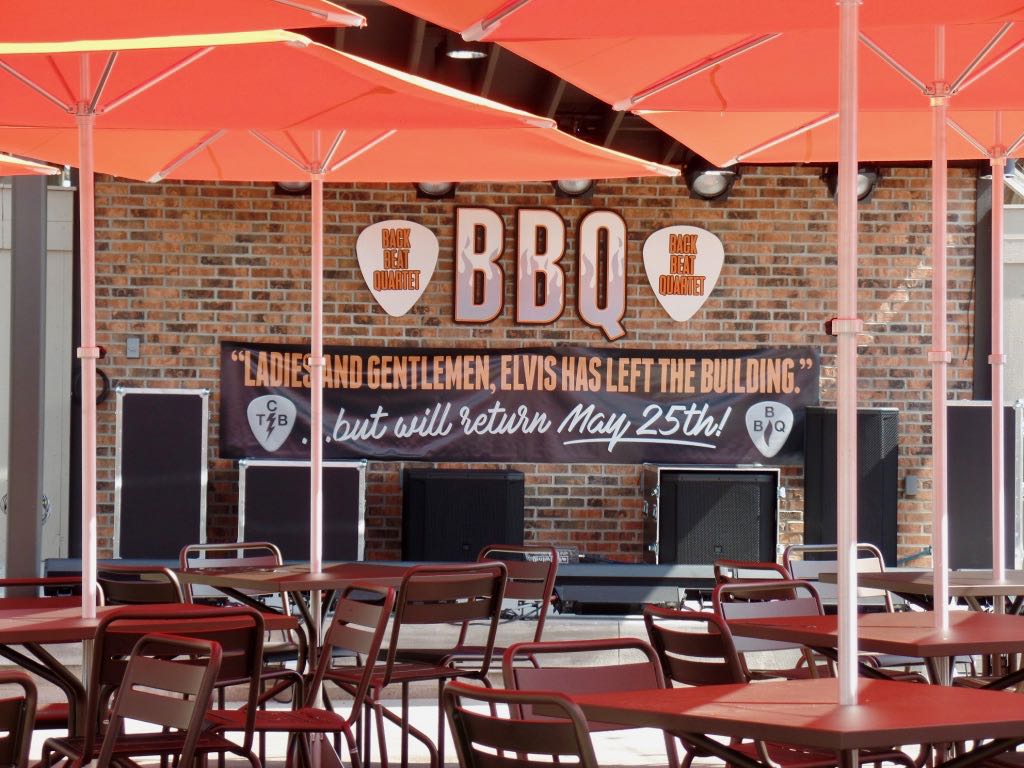 Yeah, so they took out the Witches Wheel and put in ... a barbecue place. Although one that would have live music, at least sometimes. Not this early in the season. 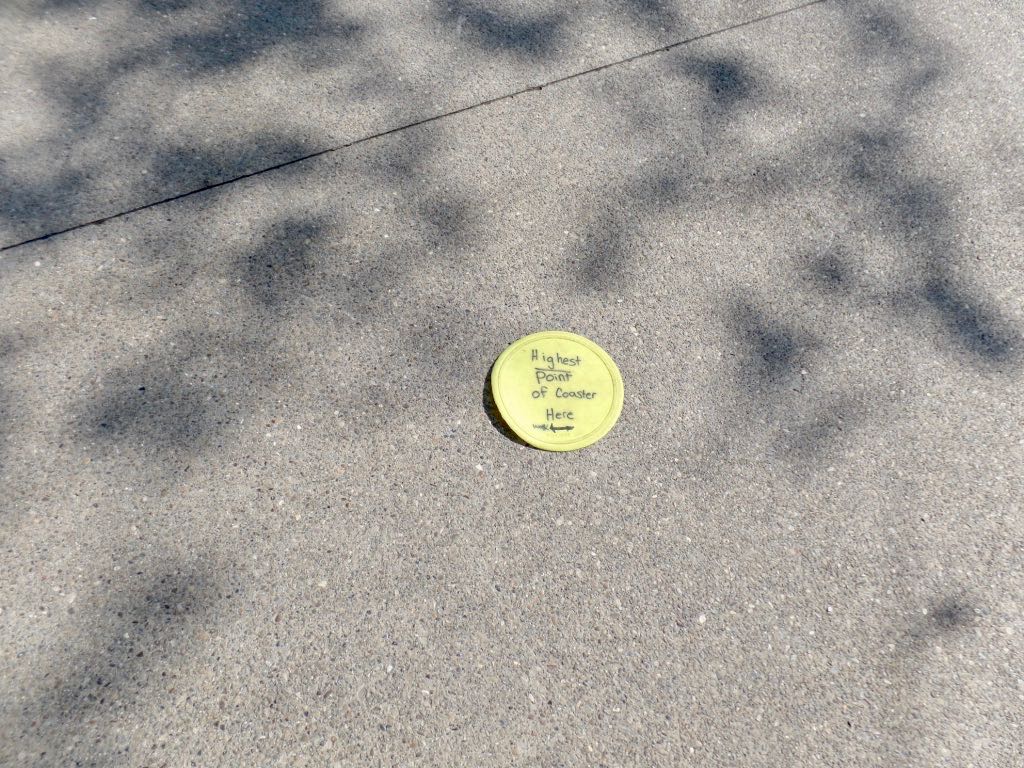 A button reading, 'Highest Point of Coaster Here', on the pavement nowhere near a coaster. We have no explanation for this phenomenon. 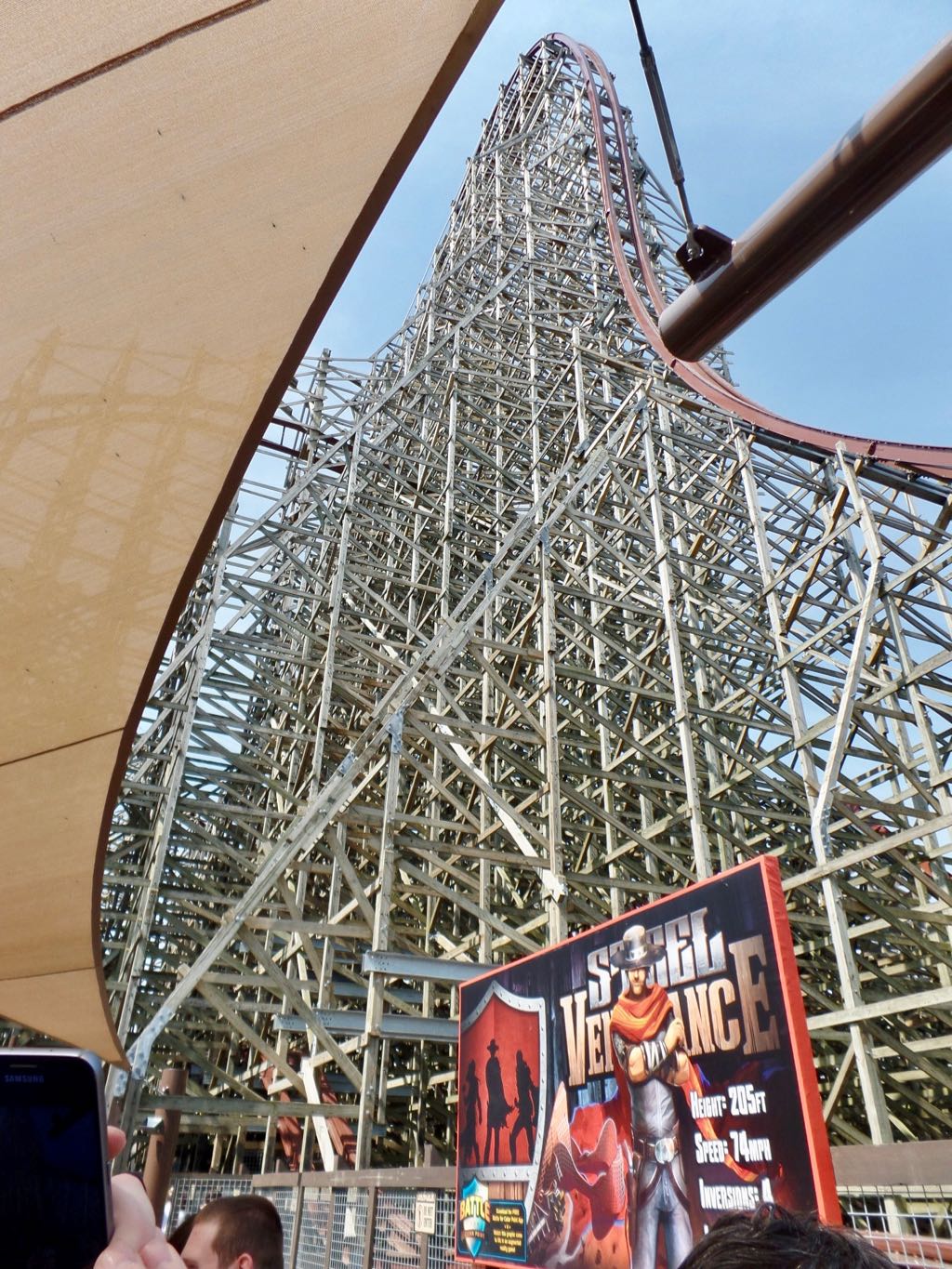 For 2019 Cedar Point relaxed its rule about No Cell Phones in line (something I took to also mean, no cameras), so we took the chance to photograph the ride's interior and theme and all that while it was allowed. Here's the first, main drop. I have a similar picture that shows the train going down the drop but somehow that one, nearly identical, just isn't as good. 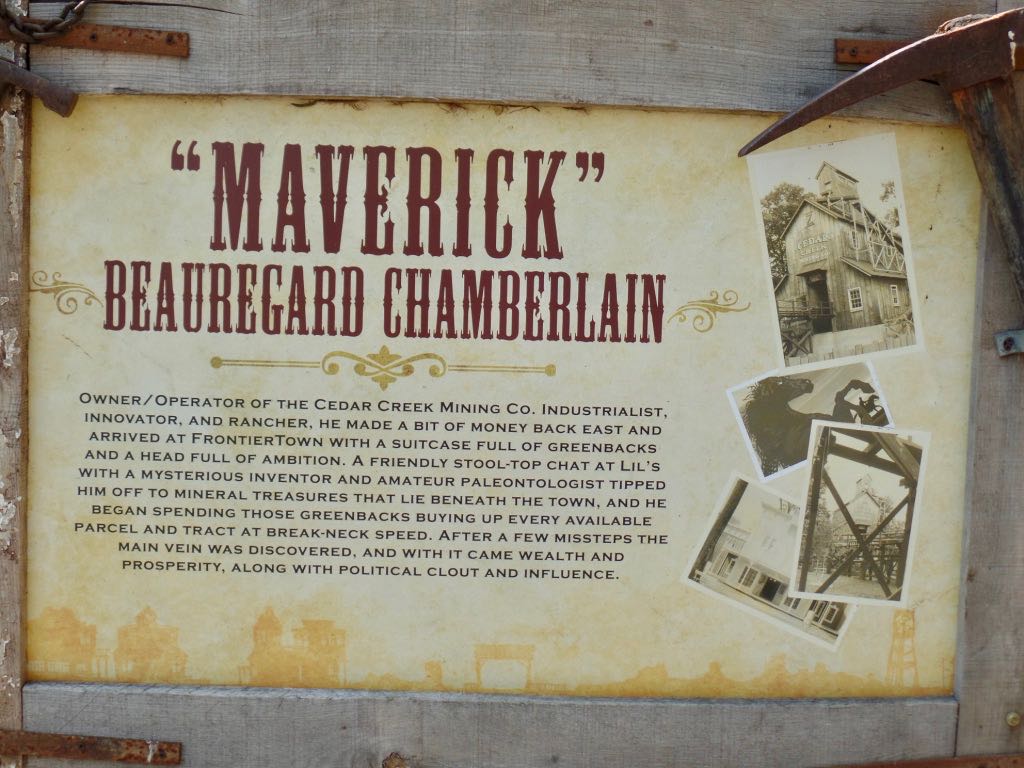 So part of the Steel Vengeance construction was coming up with names and backstories for their whole Frontier Town area. Maverick is the other big and always-a-huge-line roller coaster in the area. The Cedar Creek Mine Ride is the third roller coaster, a half-century old and, well, a mine ride. So they're tying a lot of stuff together here. 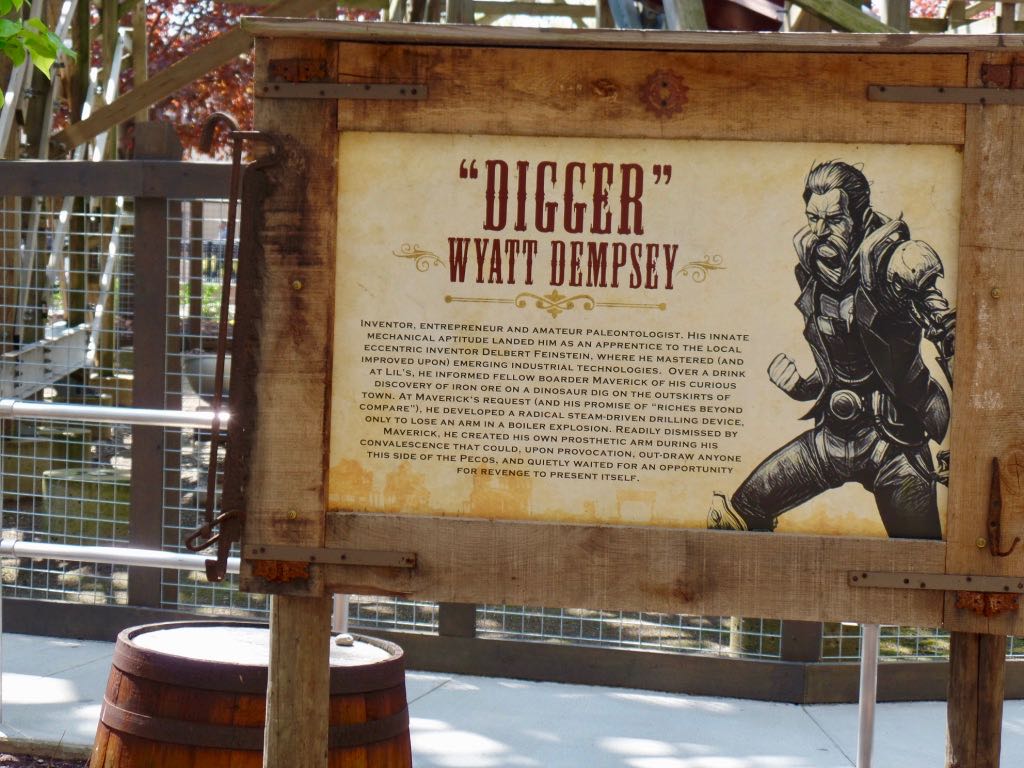 I'm not sure the significance of Digger's name. But note it mentions going to Lil's saloon; Lusty Lil's is one of the theaters with live shows. Delbert Feinstein gave his name to the reverse bungee ride when that was moved into the main park, and he's presented as inventor for some of the contraptions that decorate the place for Halloweekends too. 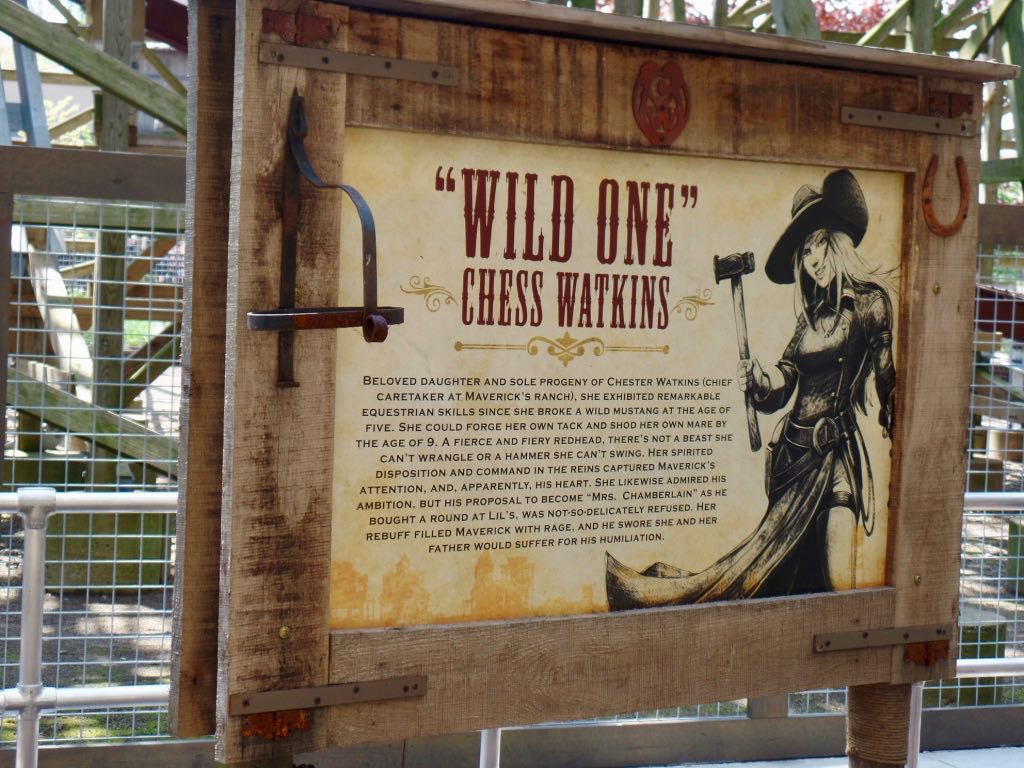 More backstory and characters for Frontier Town. More mentions of Lil's. Chess is a name given one of the roller coaster trains. 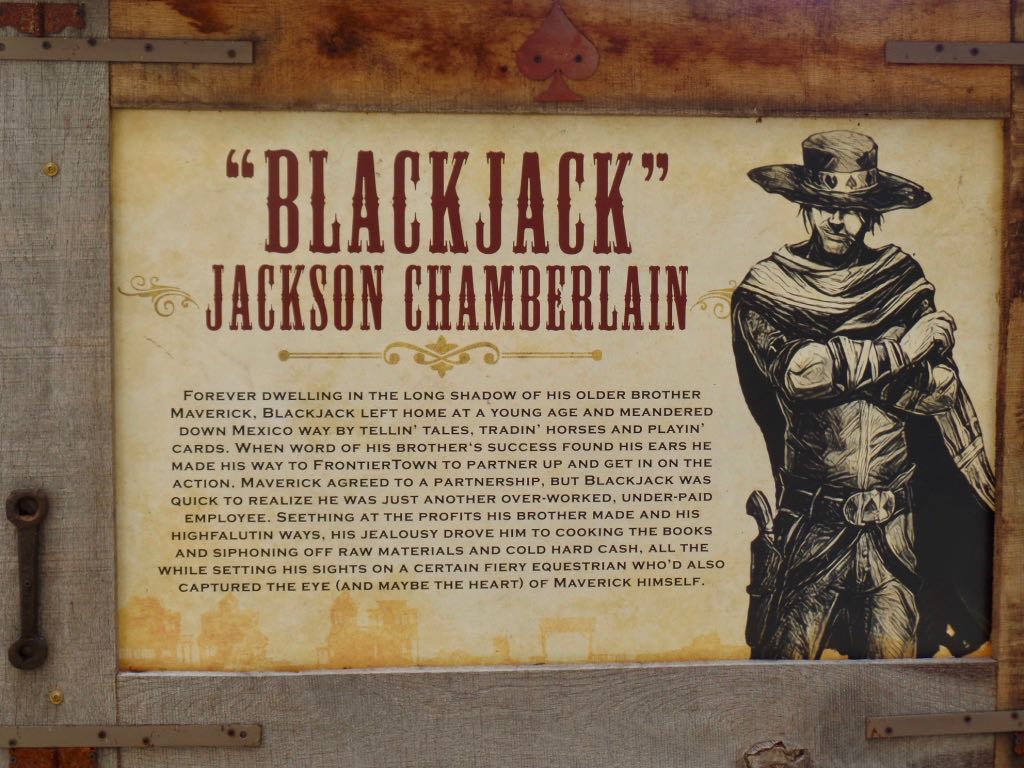 Blackjack is another of the roller coaster trains. 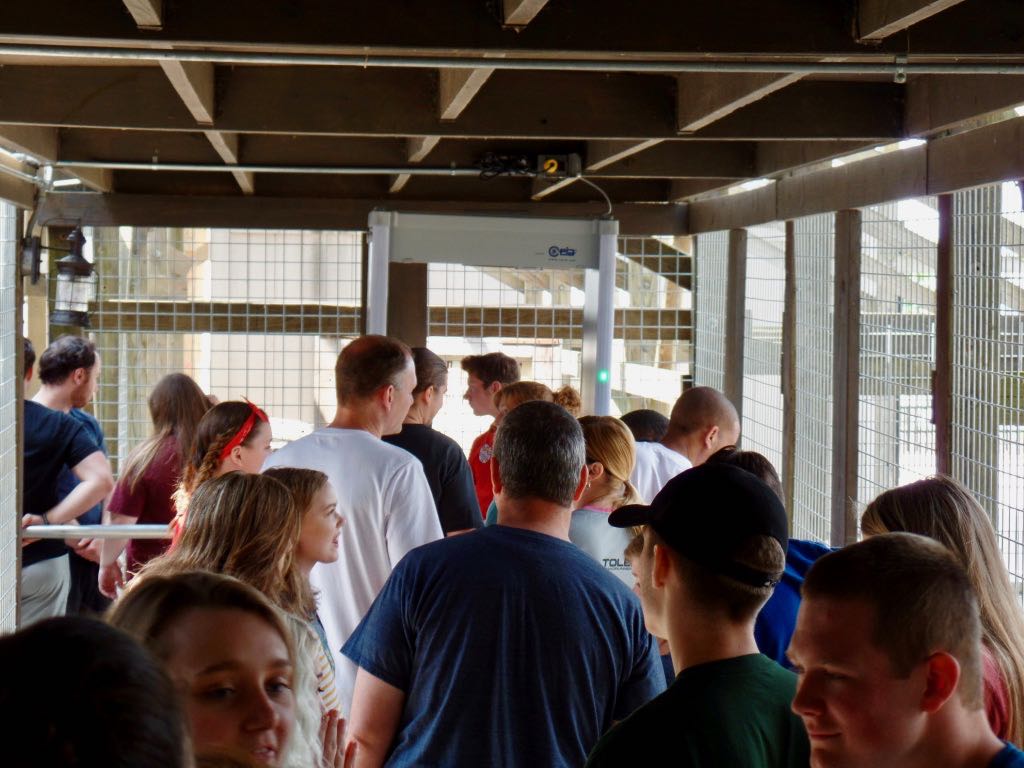 A metal detector, meant to denote whether you had something like a camera that would need to be secured. It went off for everybody, raising the question, why have one? 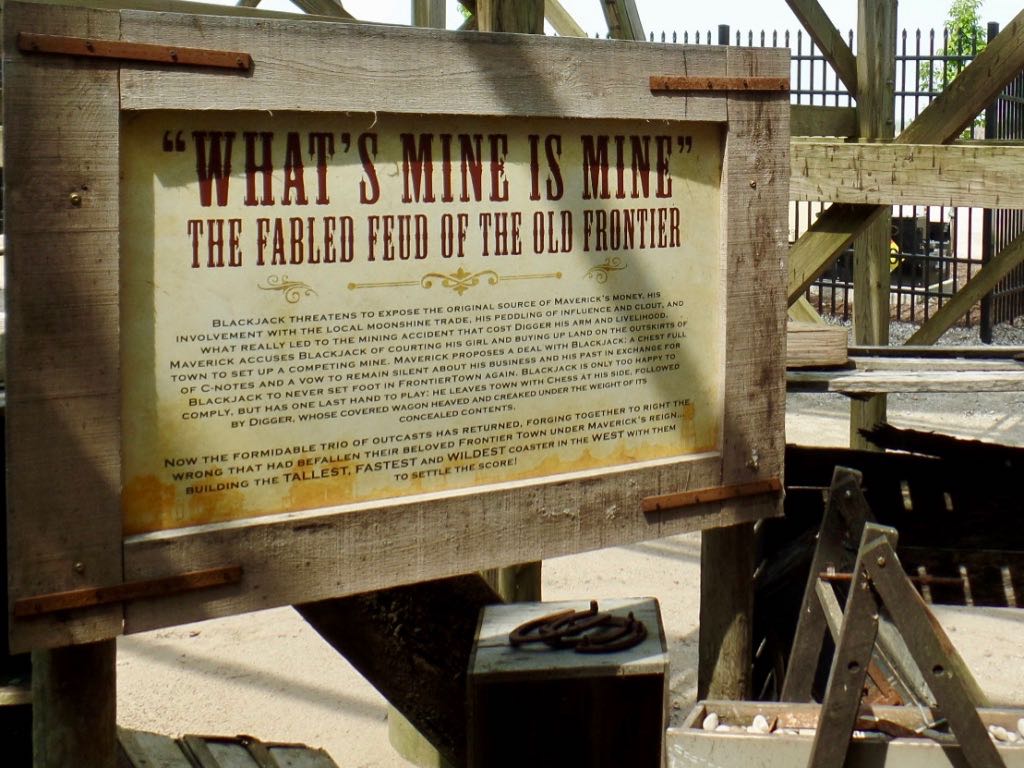 And ah, here, we finally explain how Digger's lost arm and Chess's refusal to marry Maverick leads to Blackjack being ... uh ... and then they build a roller coaster! ``Makes sense,'' said Glinn Gusat.

Trivia: Animator Paul Terry was attending George Washington University when, on the 9th of October, 1918, the school was suspended by the order of the Health Department, result of the flu pandemic. His academic year would be extended to the 18th of June, 1919. Source: Terrytoons: The Story of Paul Terry and his Classic Cartoon Factory, W Gerald Hamonic, PhD.