Nintendo did not call today. Instead, I called them, and after explaining the situation to them, they started to check what the current system was on the hypothesis that something screwed up in a system update. Then they hung up on me.

I called back, extremely angry in a way that would have made

bunny_hugger cringe mightily, and I explained why no, T---, you did not understand my frustration until I laid out the entire sorry mess of a Switch that, as best I can tell, they just assumed was fixed when they put in different joycons.

After another freaking hour on the phone and going over every detail of how I know the Switch is broken and why I know it is not our router that's the problem they finally conceded: the Switch is broken. They've started a new repair order with, they claimed, a detailed description of what is broken, how I know it's broken, and how freaking furious I am about this after spending four and a half hours on the phone, getting hung up on twice, and being told falsely that they would be calling me back. So we'll see whether that actually does anything.

Also they're aware there is an Animal Crossing village on this thing. The last person I spoke with said they were ``very good'' about preserving data wherever possible but I see the weasel words.

Anyway. Next big thing on my photo roll? Anthrohio 2019, which was fun despite being in the new hotel. Let me start sharing pictures of the place from the Thursday night we got down there and Friday, the first full day of the con. 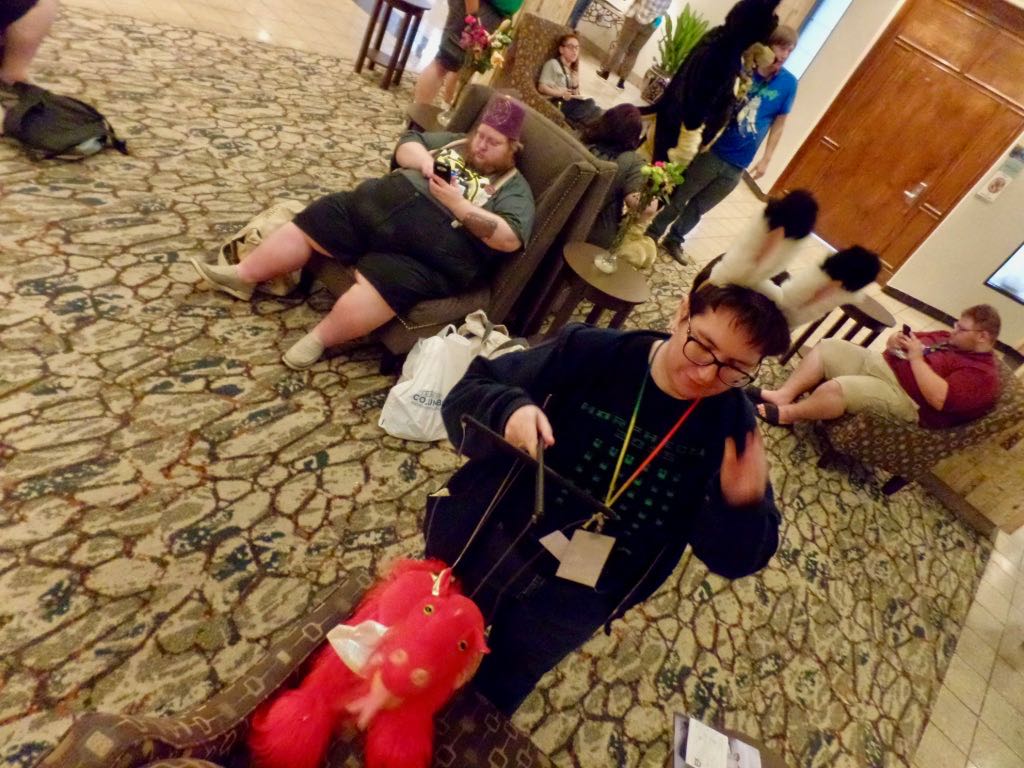 bunny_hugger getting in some marionette time on Thursday night, as people arrived for AnthrOhio. 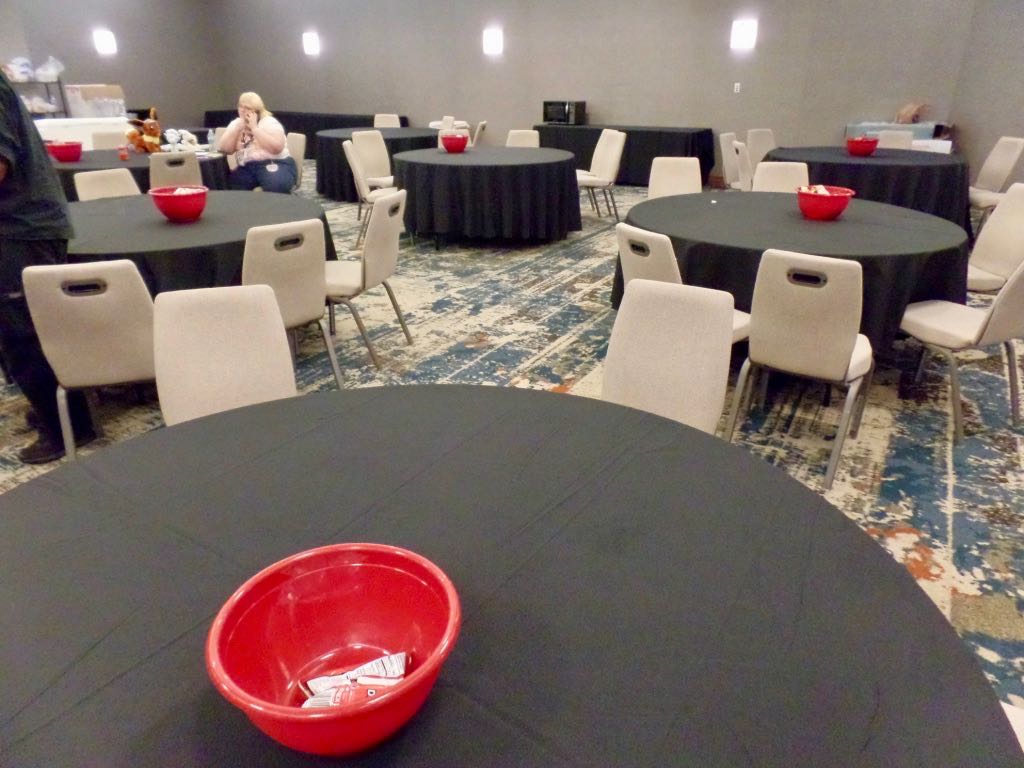 The most orderly that Hospitality would be all weekend. 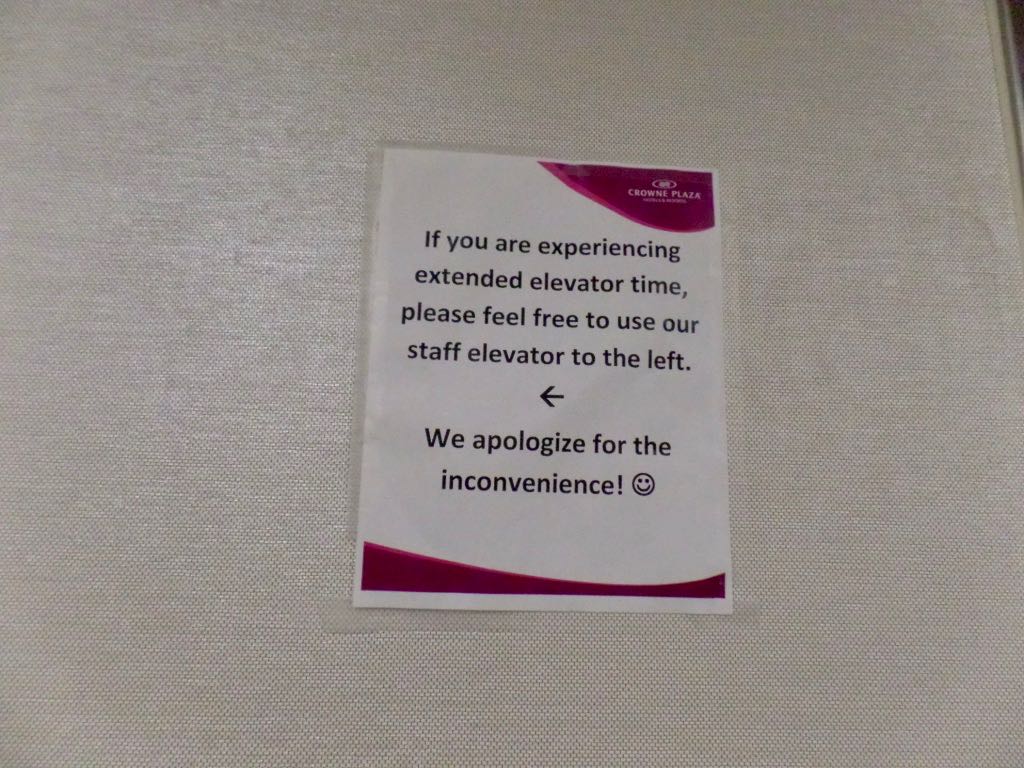 The hotel was doing its best to relieve some of the elevator overload! 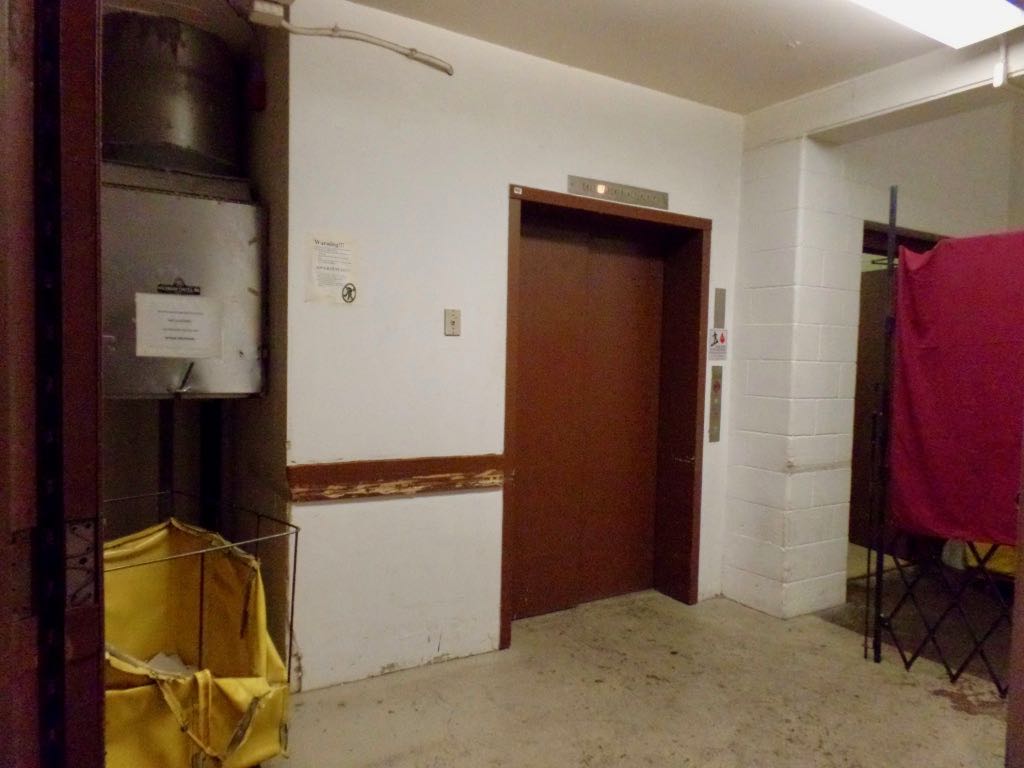 Here's the staff elevator we were pointed to. We never used it but it would have been a nice illicit-feeling thrill to. 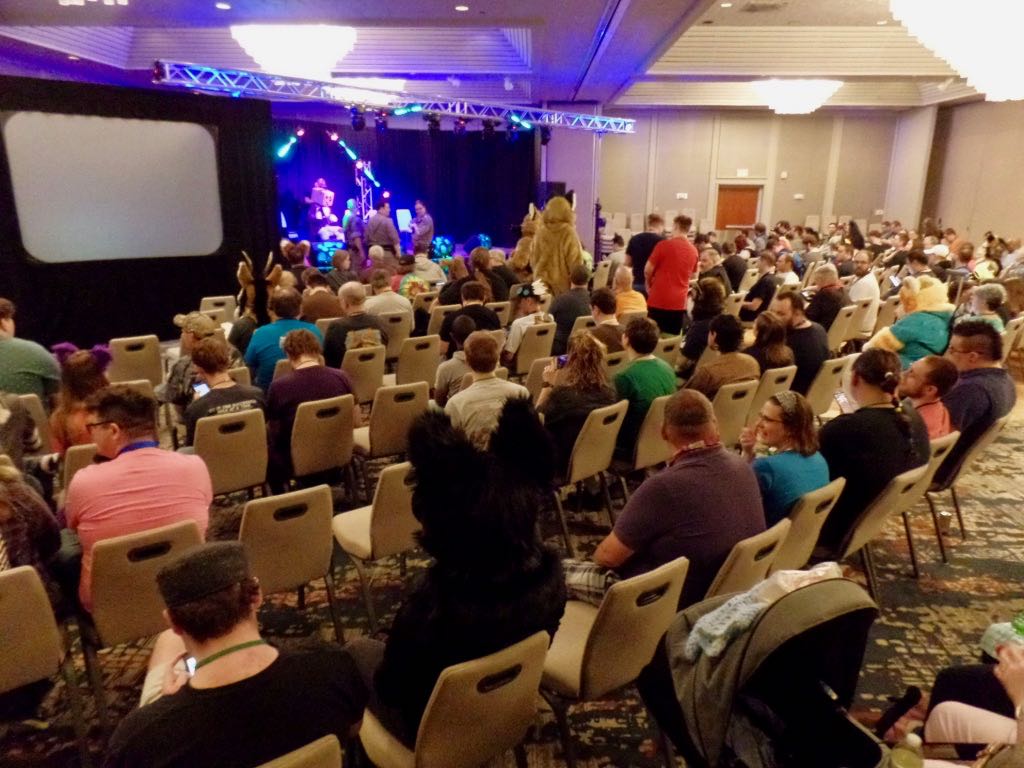 Friday morning! The opening ceremonies get organized and we saw the new stage. It ran diagonally across the ballroom, reducing how far people would be on average from the stage but also --- to our shock --- eliminating the puppet stage. Given that there hasn't been a puppet track in years, just me and

bunny_hugger clowning around, that's not much of a loss but it still marked yet another era ended. 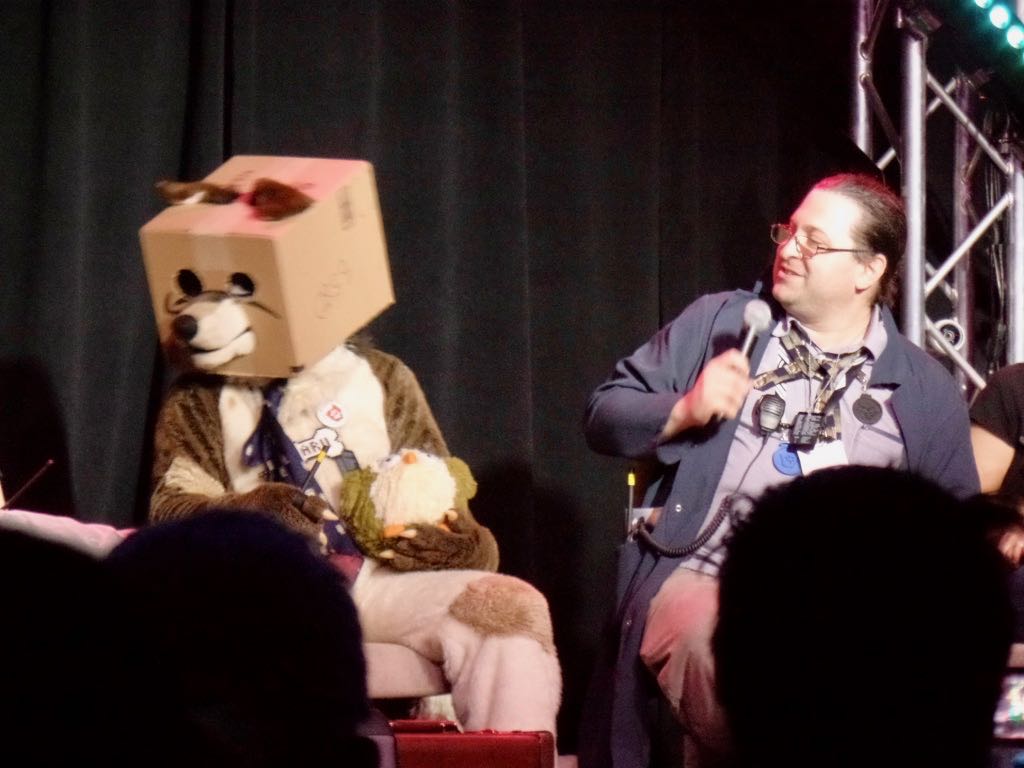 The convention's ``story'' was about the Box Owl corporation having taken over the con, so here's a box-head representative. 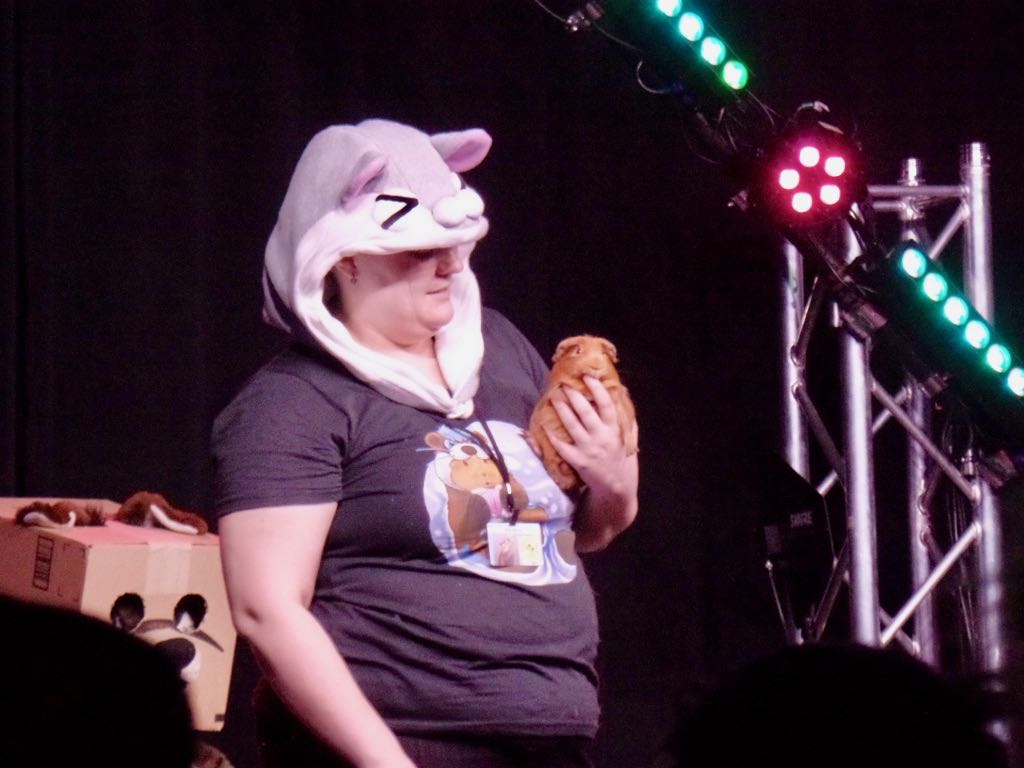 Guinea pig brought on stage by the charity, a small-animals rescue. The guinea pig shows off the mood that I absolutely love about guinea pigs, that face that says ``was I brought into this meeting by some mistake?'' 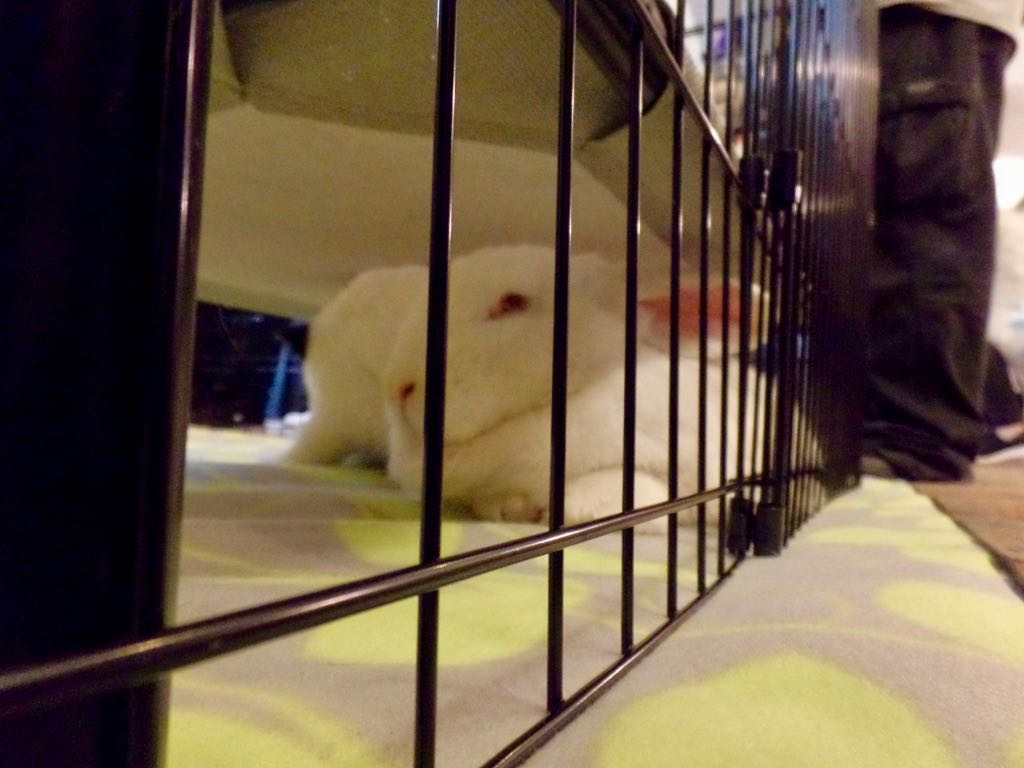 Fluffy white bunny. After opening ceremonies we got a look at some of the animals the rescue thought good at handling crowds of furries staring at them. 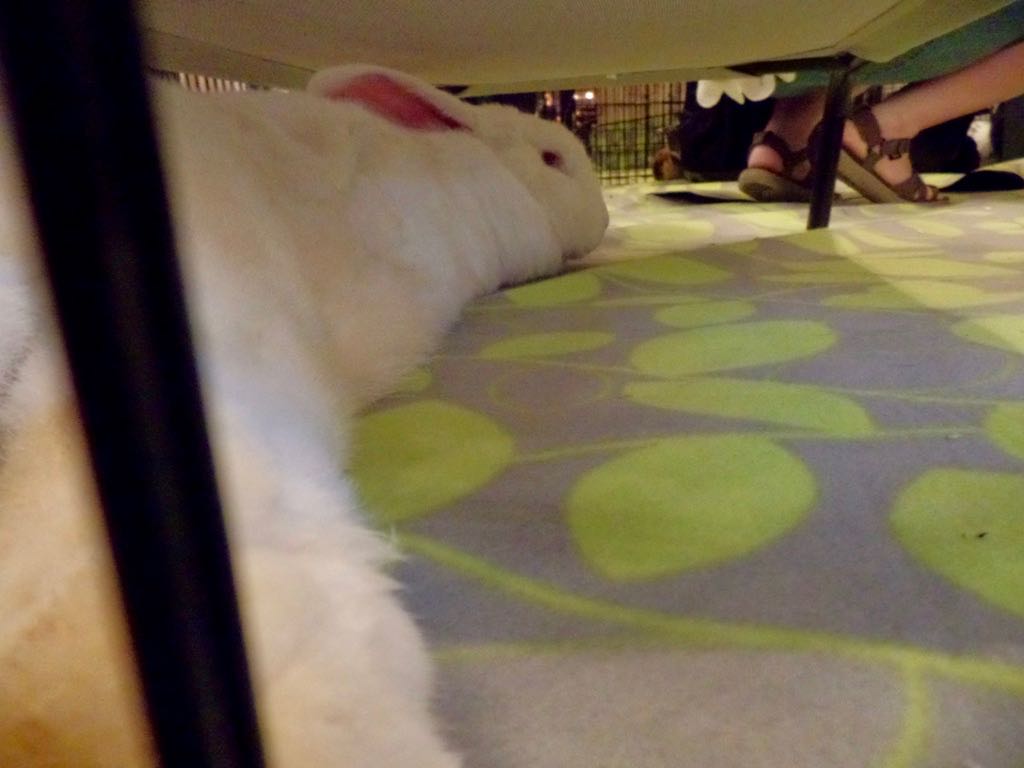 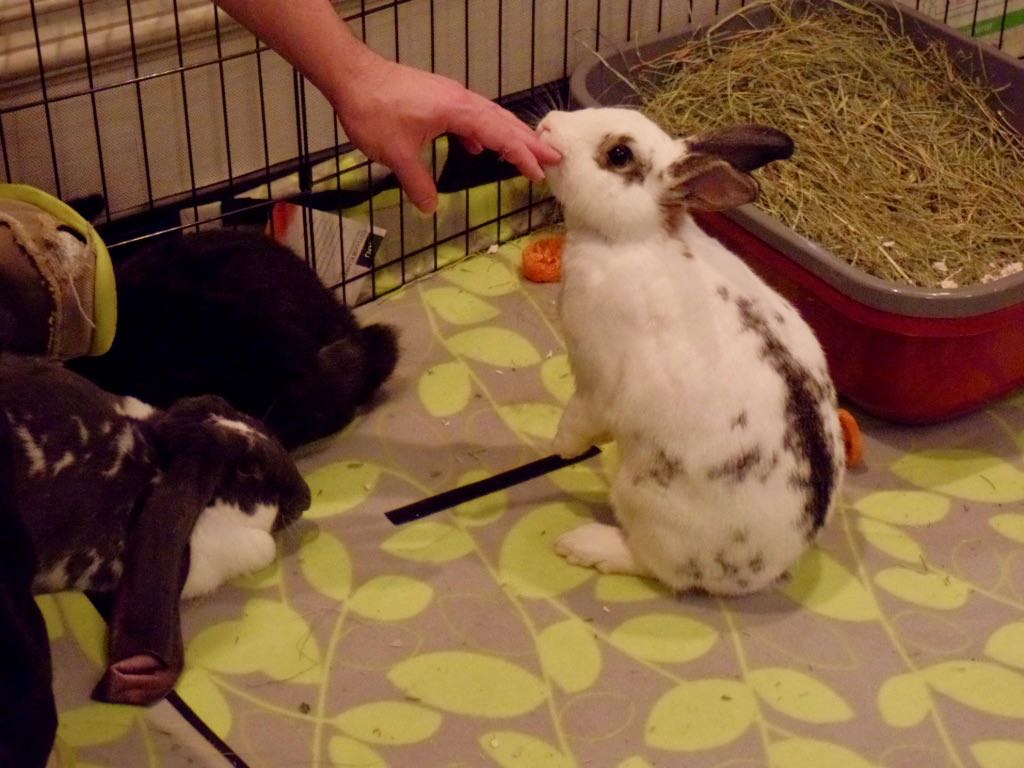 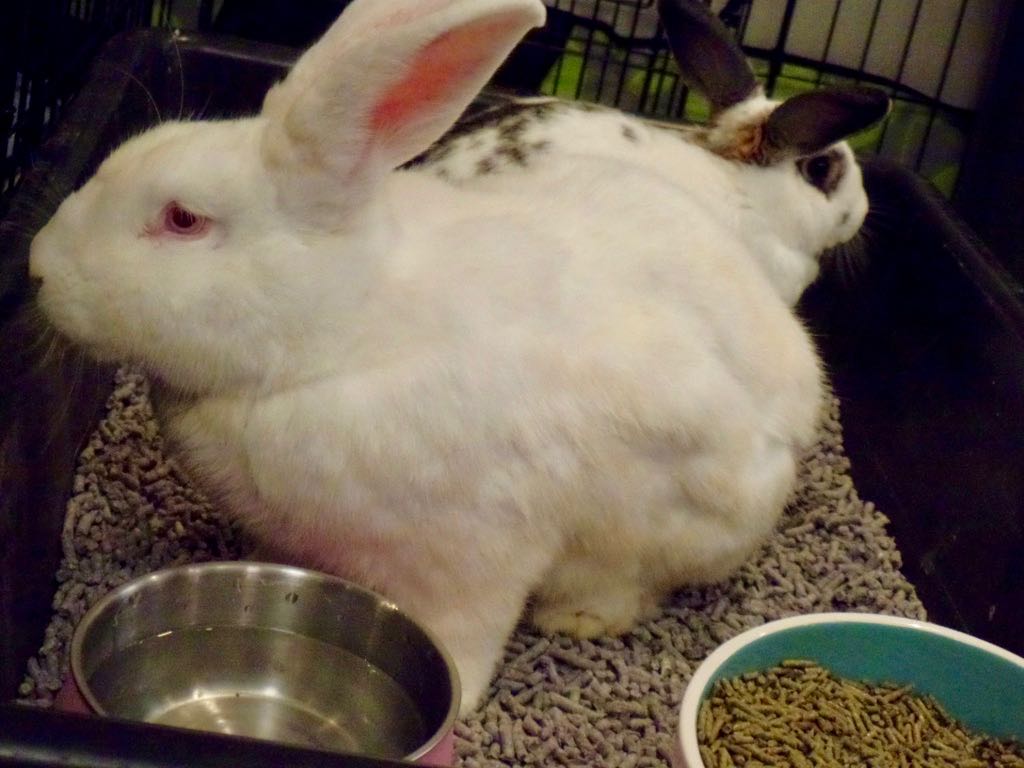 Red-eyed white rabbit is not hurt, just disappointed in you all. 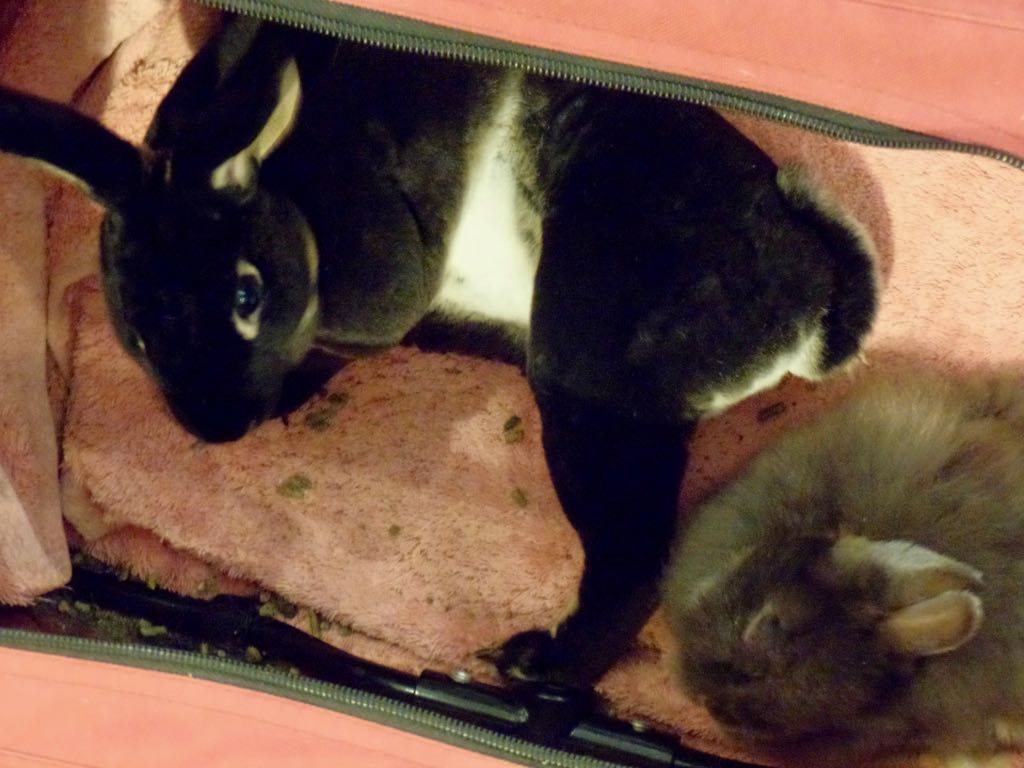 Rabbit who's gone in for the thigh-high black-boots style.

Trivia: Mutual Film Corporation and General Pancho Villa signed a contract in 1914 wherein Mutual had the ``rights'' to the Mexican Revolution, with Villa promising not to allow ``any other moving picture men except those of the company [ ... ] on the field during his battles'' and also that, when possible, battles would be held during daylight hours. Villa got $25,000 and a 50% share of the earnings. Source: The American Newsreel 1911 - 1967, Raymond Fielding.

PS: Using my A to Z Archives: Encryption schemes, some talk about one of those things that we expect would be altered considerably if it turns out P equals NP, notably.