Bill and Ted Face The Music. We saw it at an actual theater, the US 23 drive-in in Flint, a nice spot with three screens. We have the bandwidth to watch streaming movies now, we just ... don't. I'm glad we did go to see it, though, even if the rain got heavier throughout so the film was dimmer and blurrier than it should have been. The lightning storm in the sky harmonized well with the climax, though.

We were glad to see it, though. Really pleasant, pretty satisfying. I know how much of the film amounted to remixes of stuff from the first two movies, beloved nostalgic icons that I am sure, even though I haven't seen two minutes of either in over 25 years now, have not aged badly despite being full of humor for the drug-free stoner humor of the late 80s/early 90s. After posting these thoughts I will take a long sip of hot cocoa and finally watch my double-feature DVD set of the originals. 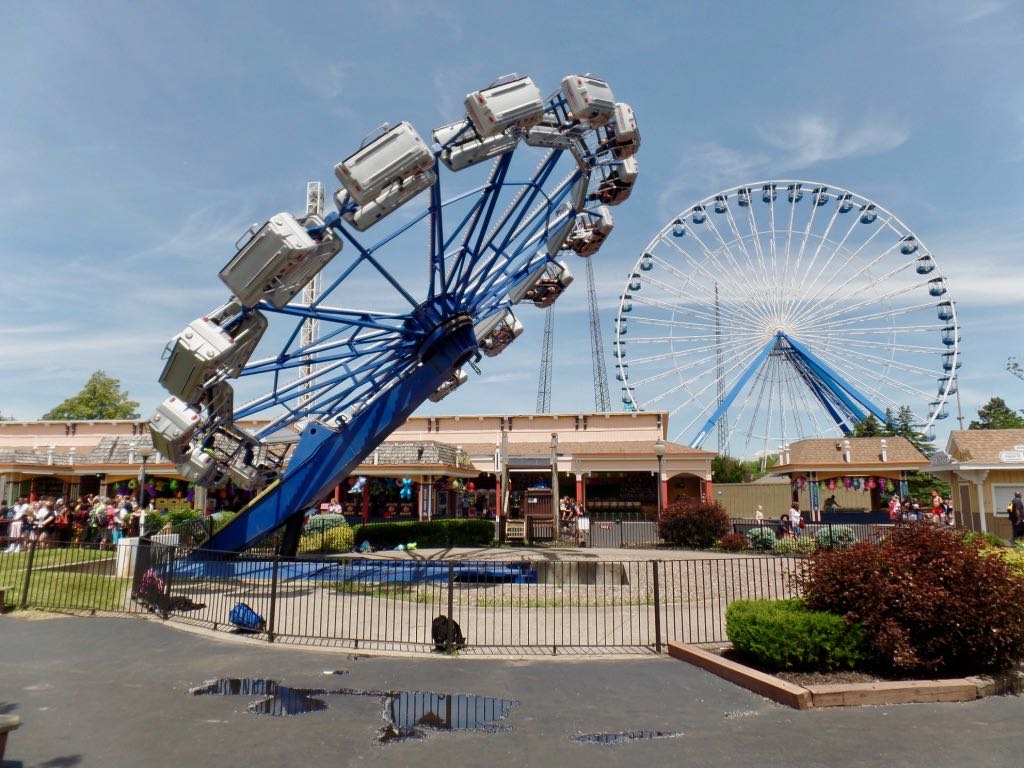 Silver Bullet, another of the park's 1981-dated original rides and according to Wikipedia the only Heintz Fahtze-manufactured Enterprise in operation. In the background, that Ferris wheel? We'll come back to that. 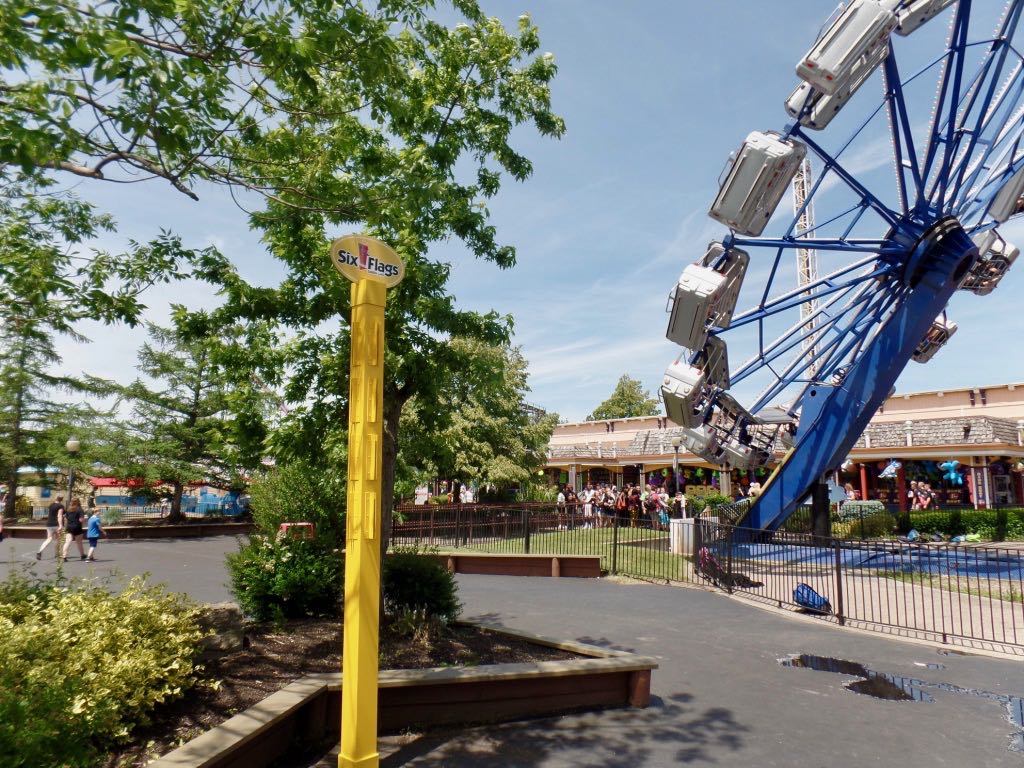 Directional sign that doesn't know what to do either. 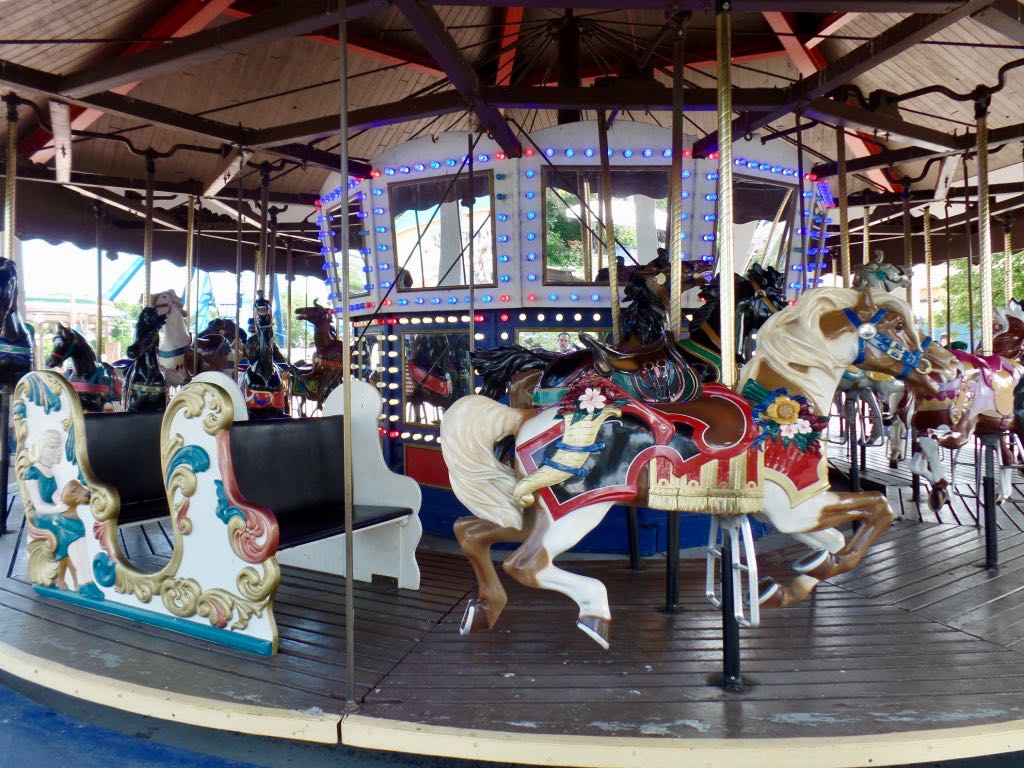 The Grand Carousel! Which is not an antique, not by Carousel standards. It's also, though, not a Chance fiberglass carousel. 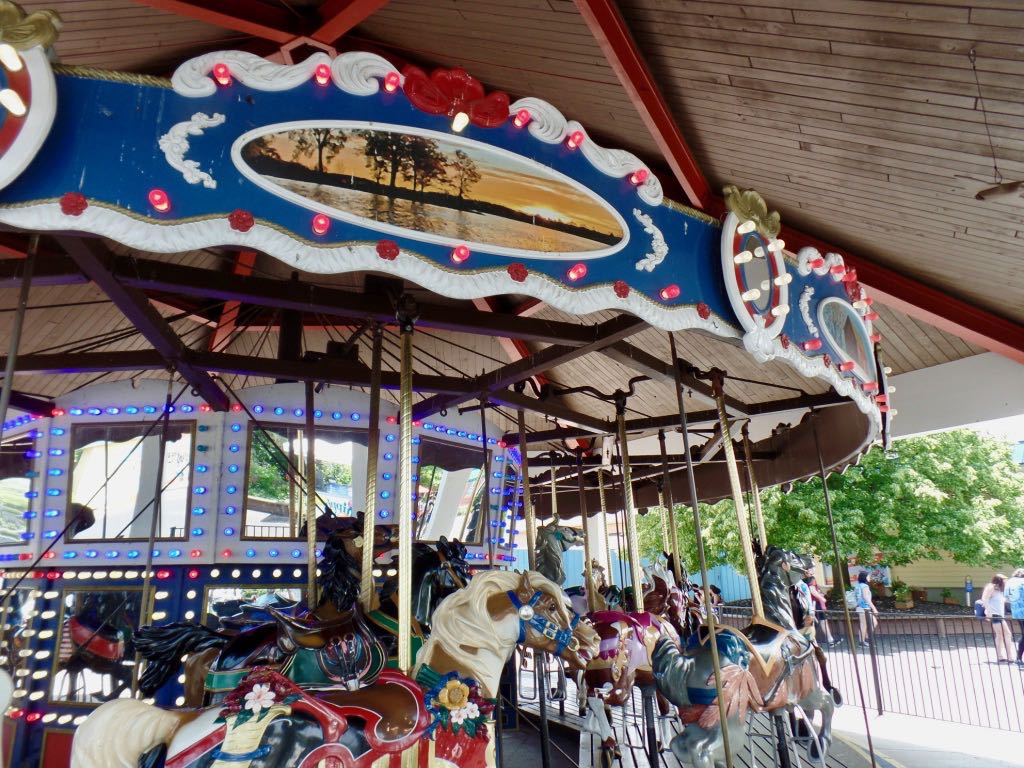 It's got some nice rounding boards of stuff you might see in Western New York, though, which is attractive. 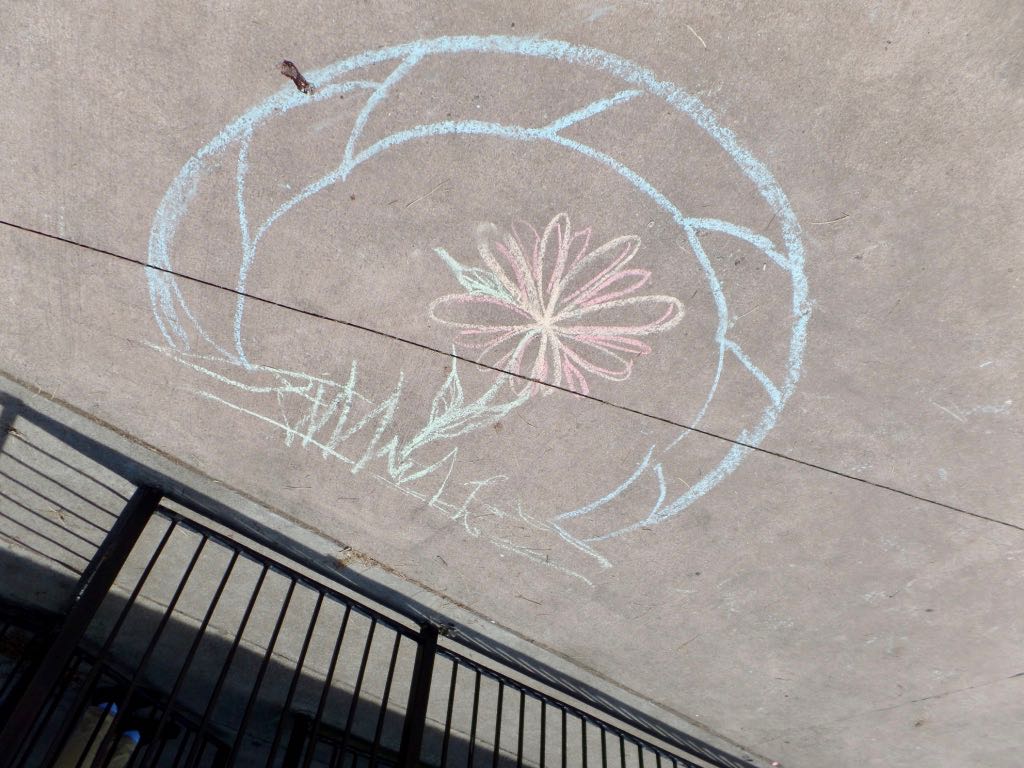 And someone was doing sidewalk art outside the carousel. 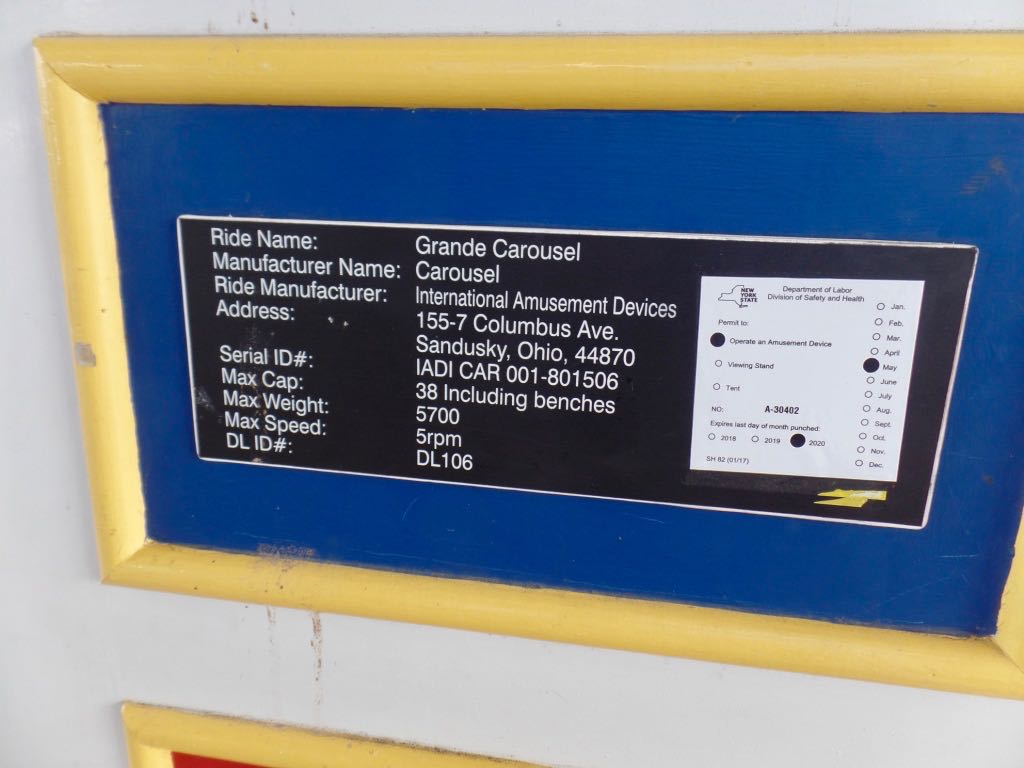 Maker's plate for the carousel, which revealed to us ... there was an International Amusement Devices in Sandusky? The spot is about one block north and east of the Merry-Go-Round Museum (the address is currently a musical instruments store) but this all implies there's a deeper link to carousels in Sandusky than we had ever realized. 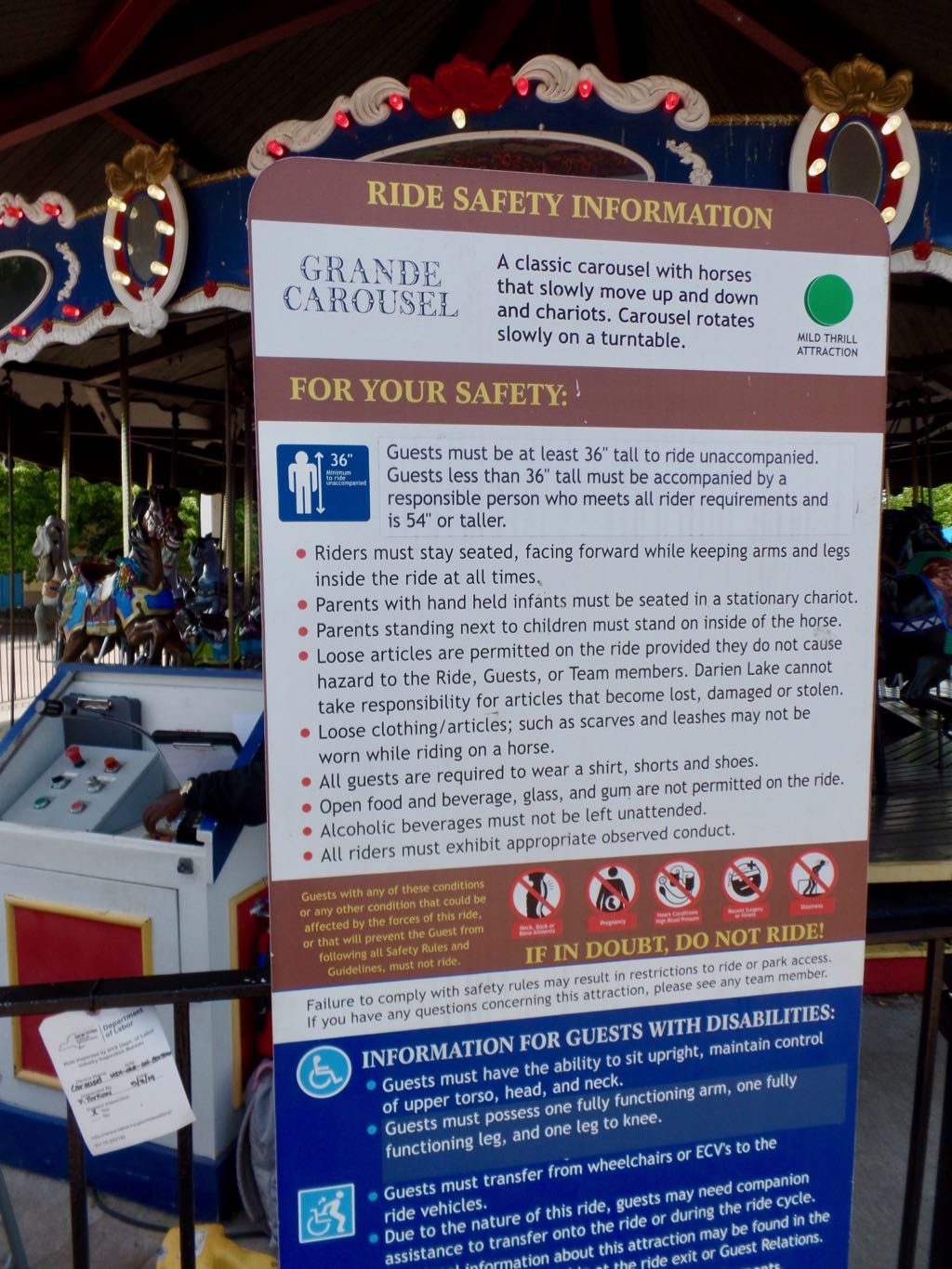 And here's your ride safety sign indicating the grande-ness of the ride. Note the inspection tag hanging off to the side there. 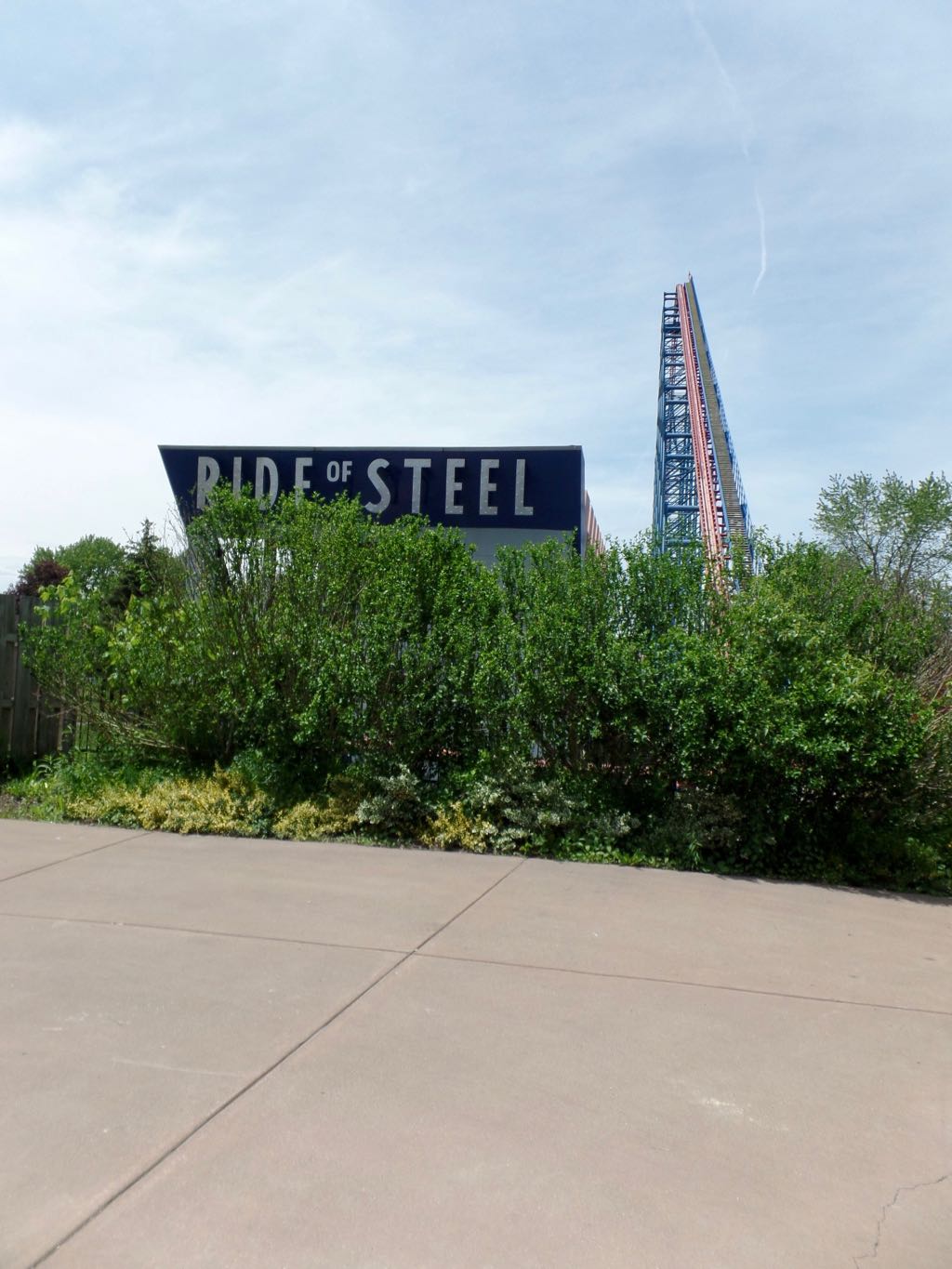 And here, a view of Ride Of Steel, once known as Superman - Ride Of Steel before Six Flags sold the park. They bought the park back but haven't renamed it back. It's 208 feet tall, the tallest roller coaster in New York State (says Wikipedia). 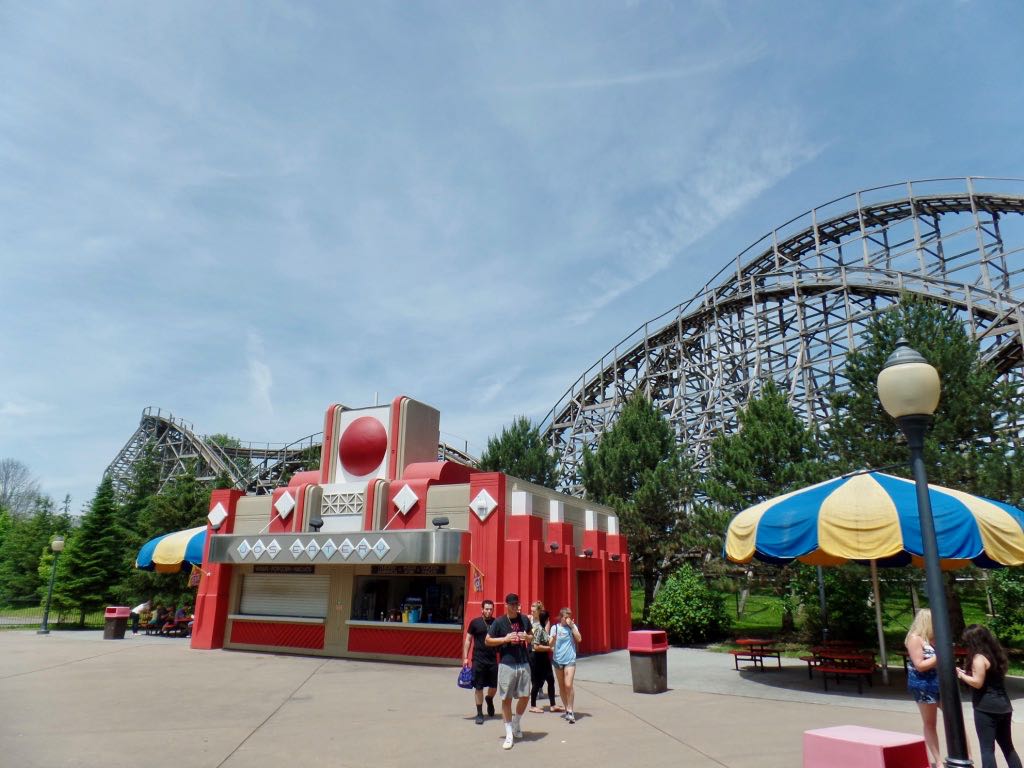 Jo's Eatery, near the Ride of Steel entrance, lets you know the Batman The Animated Series Art Deco style they're going for in the area. 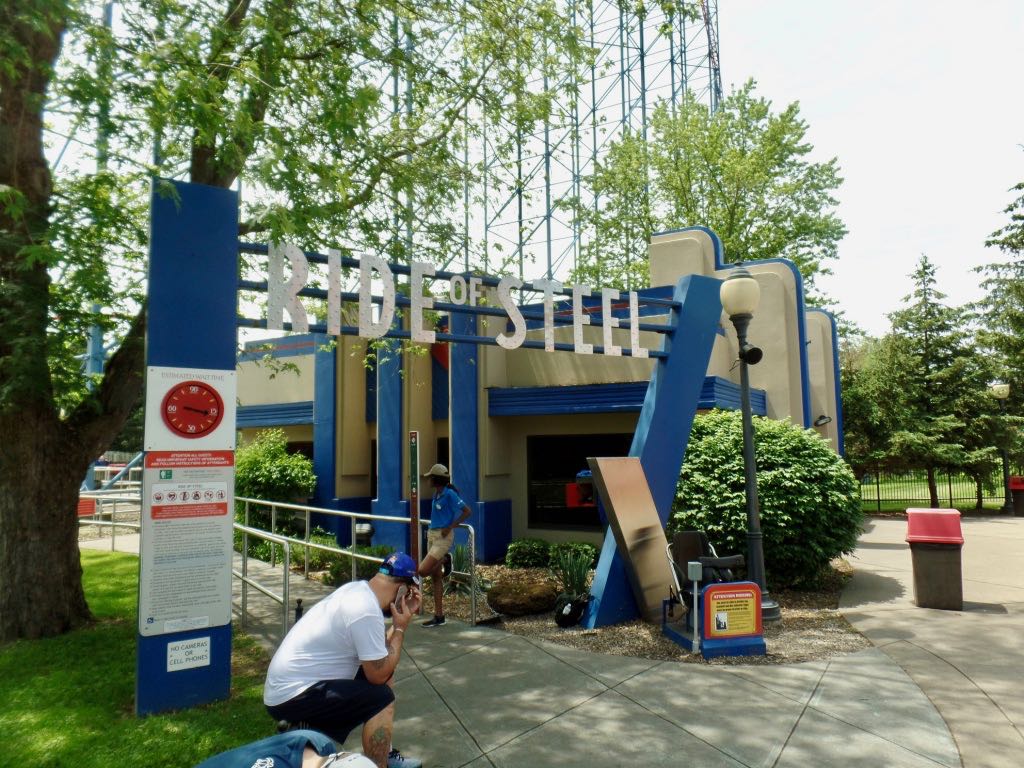 Ride of Steel entrance. Everybody went here at the start of the day; by the time we got there, you can see, the queue was under fifteen minutes. 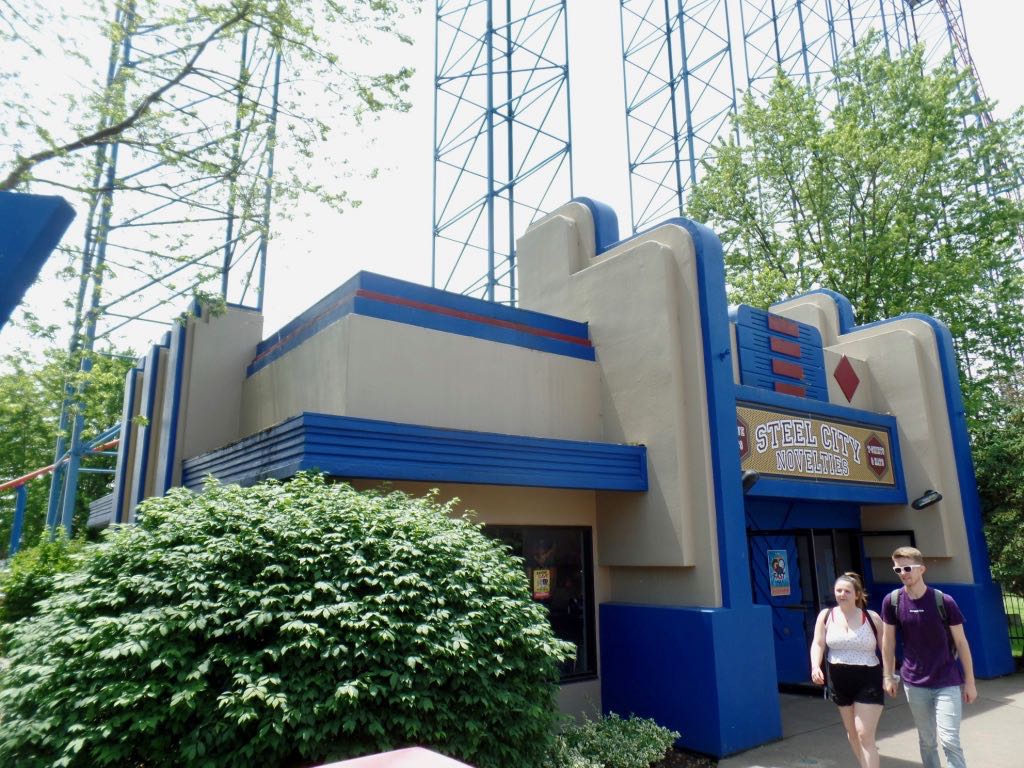 The gift shop at the exit. Inside the blue patches are where the park used to have Superman and Batman logos, from the first time Darien Lake was owned by Six Flags. They were painted over but not removed when the park was sold off. They haven't been repainted into visibility as of 2019. 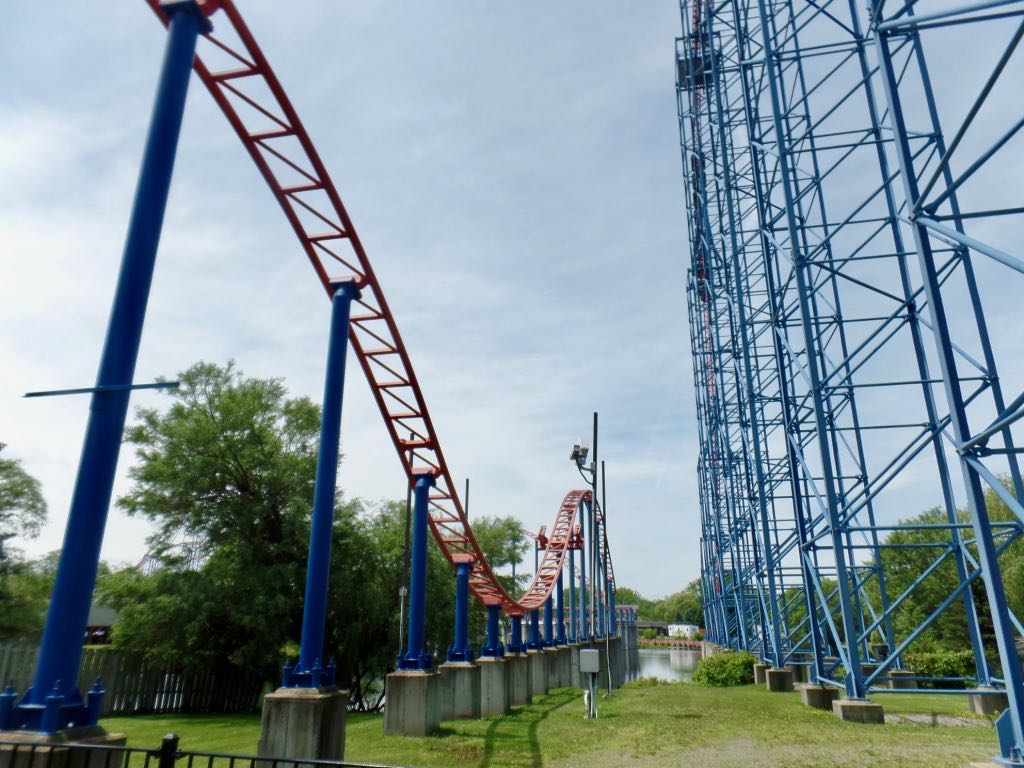 Ride of Steel's lift hill, on the right, and fun bouncy return leg on the left. The ride goes out over the water and rides along the shore of that lake, which gives it a lot of visual appeal. Also the bunny hills at the end mean the back half of the roller coaster is not boring.

Trivia: The Byzantine year's start of 1 September was used by the supreme tribunal of the Holy Roman Empire until it was abolished by Napoleon in 1806. Source: Mapping Time: The Calendar and its History, EG Richards.

PS: FindTheFactors hosts the 140th Playful Math Education Blog Carnival, just a little heads-up post for you all. Also, I agree to something that's a lot of work and maybe it'll be all right? We'll see.