Got my Christmas cards out. I had bought them in the big bookstore shopping expedition where I got almost all my presents-to-give for the year. I went, as ever, for a great picture, a woodsy one with animals gathered around a tree. So I failed to notice that the message inside was a religious one. Not one so excessively religious that I'd take the cards back next week and just send out late cards to everyone, but still one that I expect people will find out of character. Well, we all make mistakes and I'll just live with it. I figured it would be worse to scribble out the Bible verse or something like that.

Our day at Kings Island was too short --- the park closed at 7 pm, rather than the 8 pm of Cedar Point --- and our last hour would be spent wondering just when to jump into the line for a final Vortex ride. Here's what it looked like. 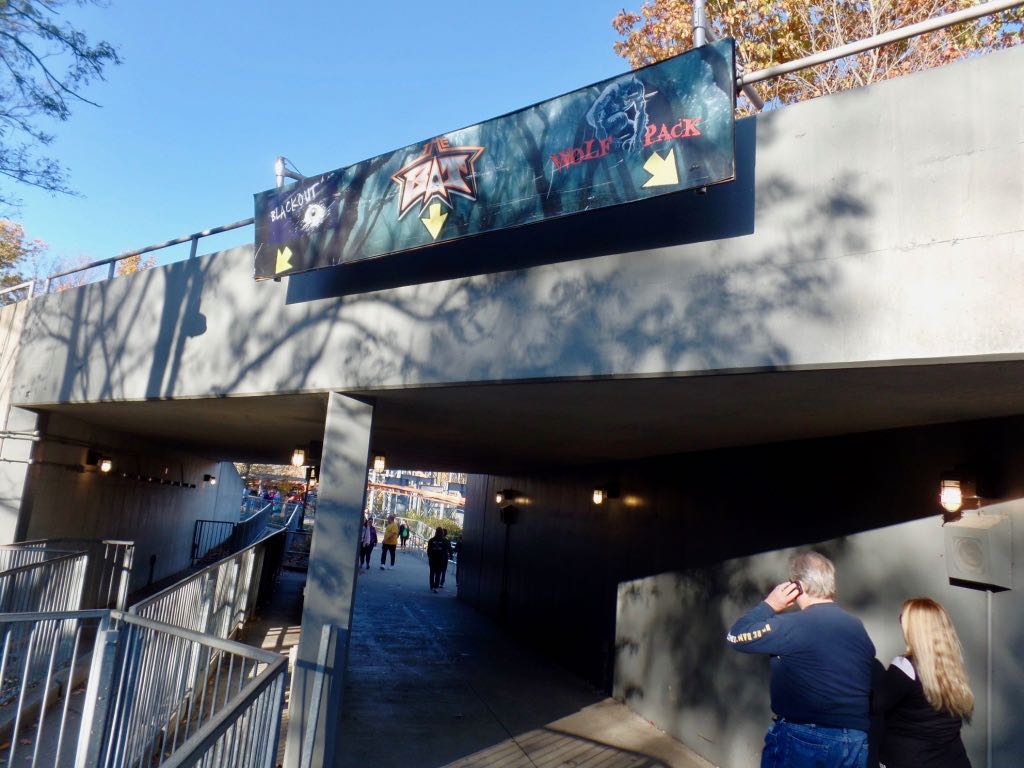 The Bat returned from its fun but too-short course and waiting for the station to clear so it can discharge passengers. There's a nice ravine to this part of Kings Island but they haven't done much with rides besides let The Bat be this high up above it. 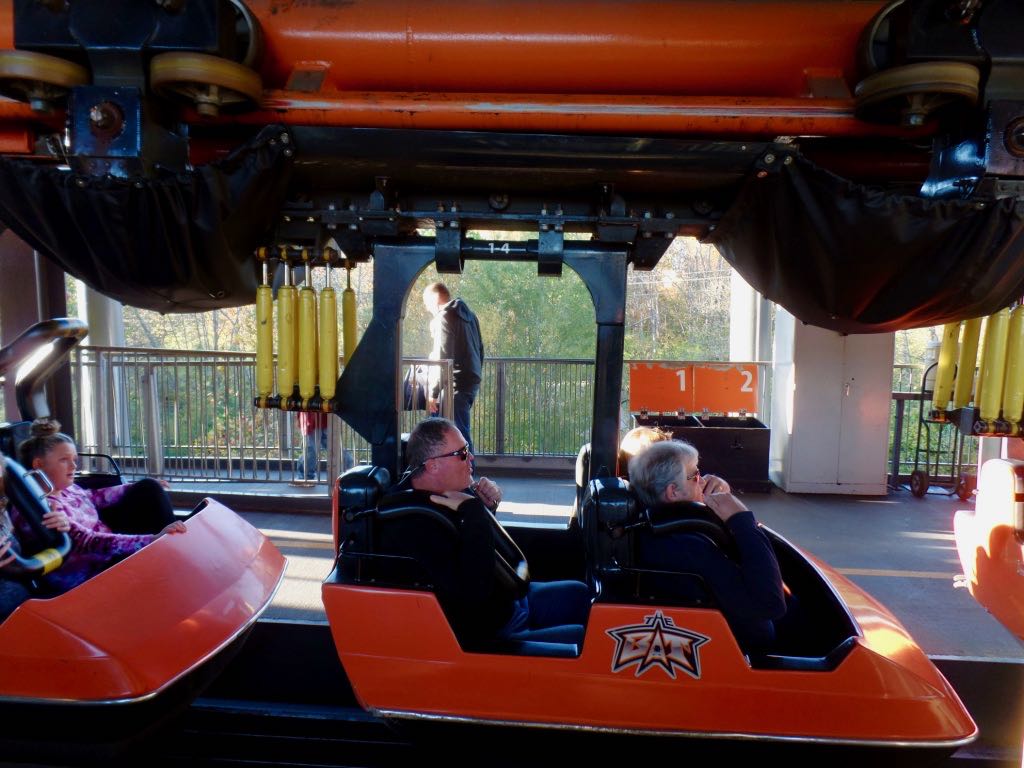 The ride's of the same kind as Iron Dragon at Cedar Point. This The Bat has a completely different logo from the first The Bat. 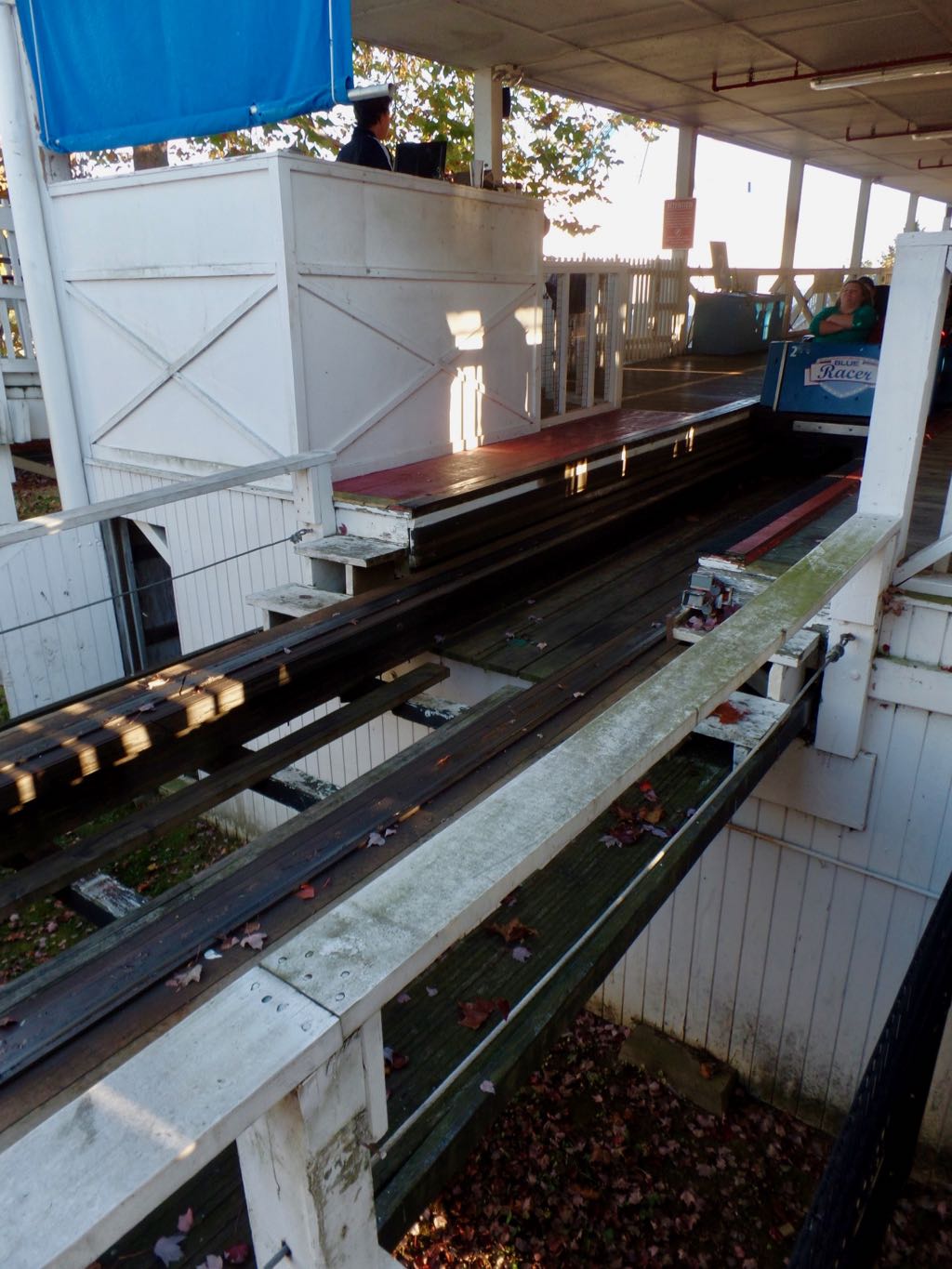 Back to the Racer; here's the Blue train getting ready to launch. 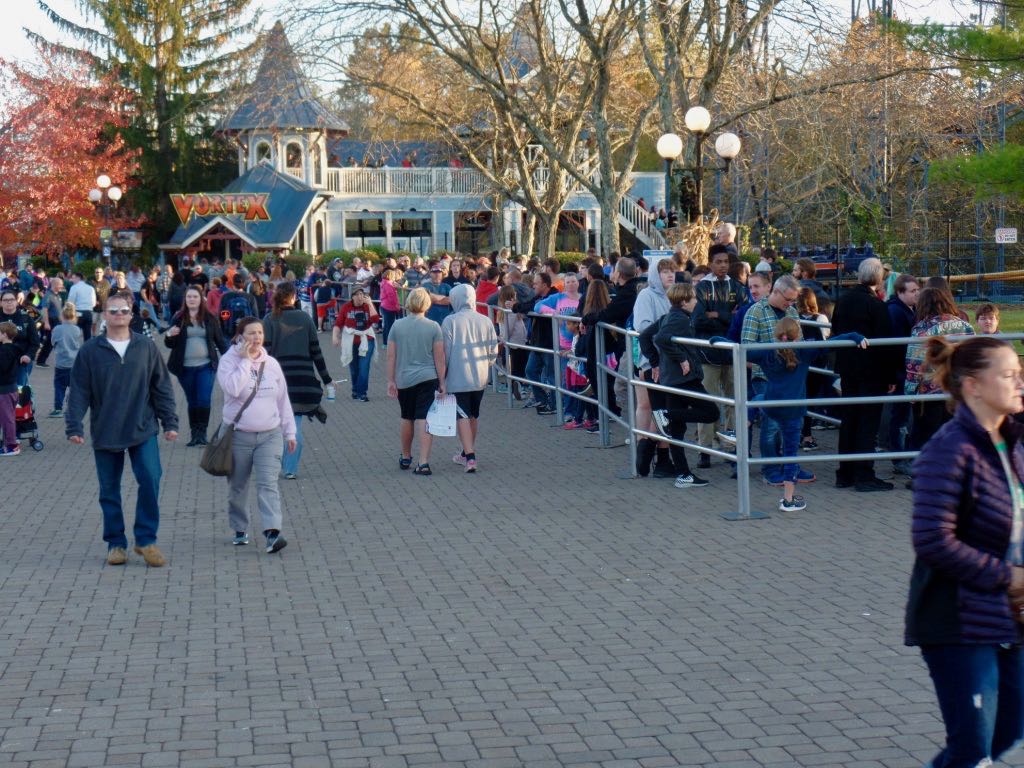 Walking past Vortex again. They'd doubled the temporary queue back on itself and that was filled up; we felt very good about getting three rides in first thing in the day. 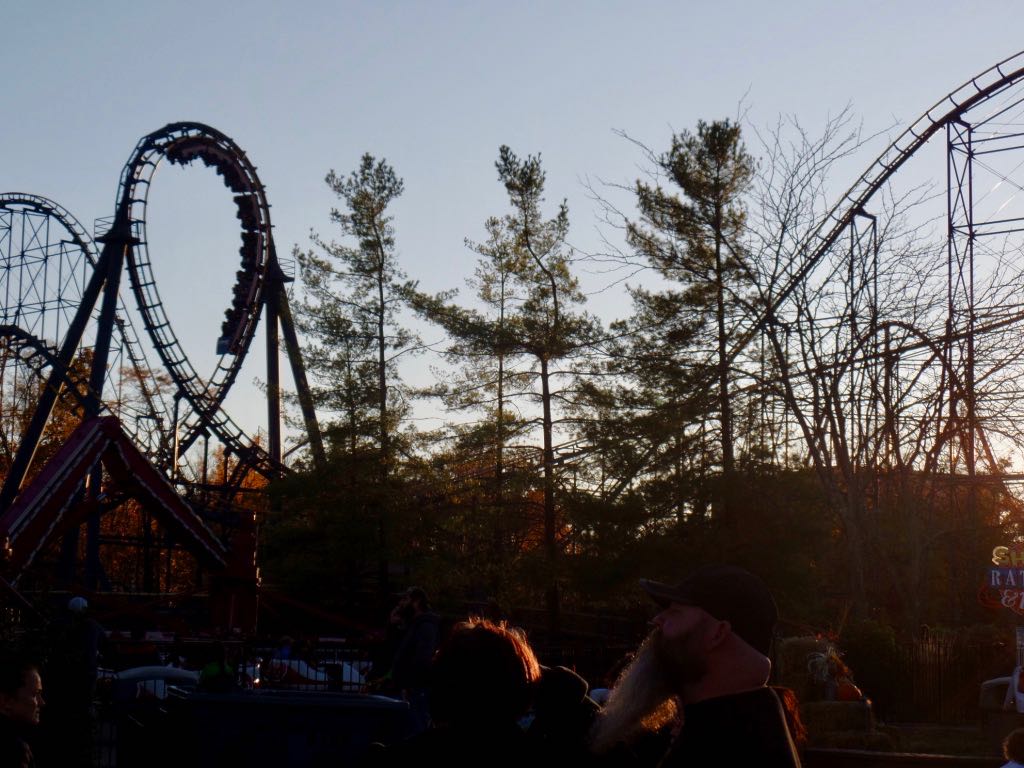 Vortex taking a loop in the early evening sun. Also, again, sky could not be better. 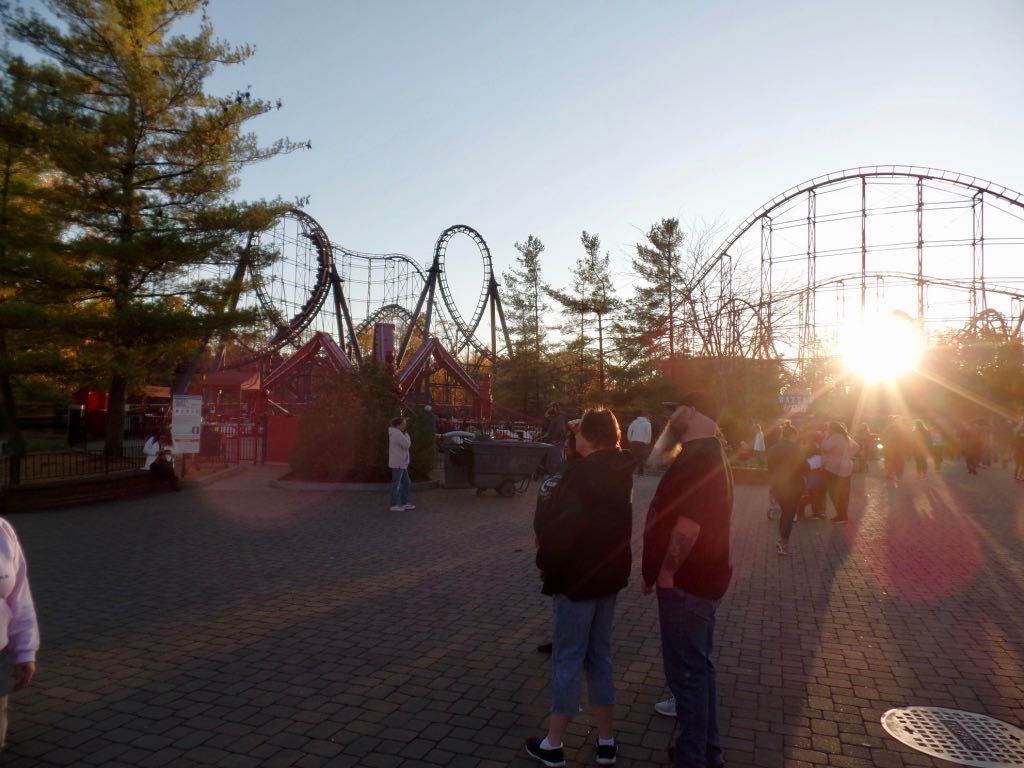 Photographing right into the sun at Vortex. 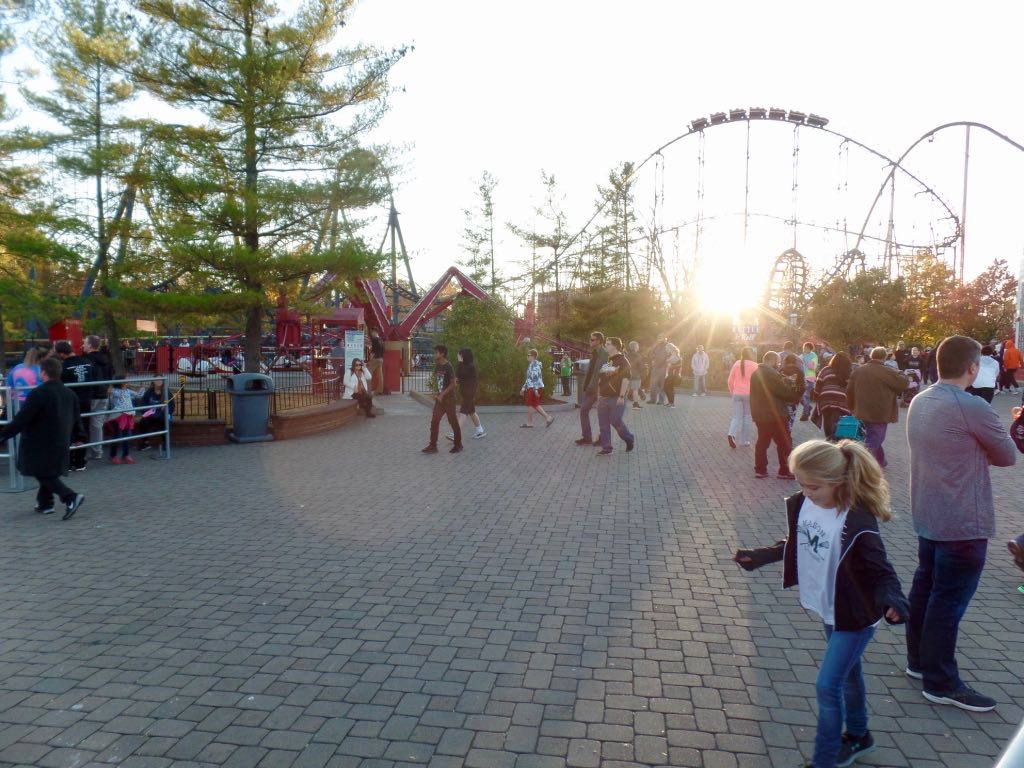 Vortex going over the sun here, which is all the justification I need for this picture. 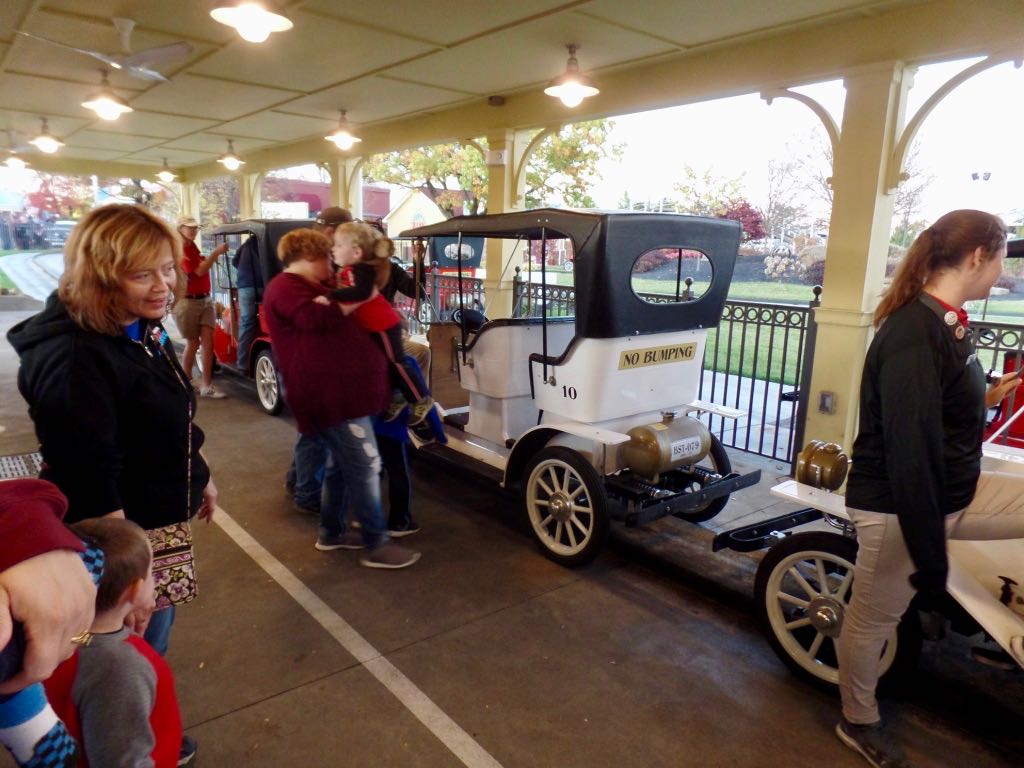 Kings Island's new --- and most popular --- ride for 2019 was the Antique Autos here. We took a ride and worried that the queue would be so long we wouldn't get back to Vortex before the end of the day. Note that the license plate for car #10 there is 'BST-079'. It's a joke: the BeaST opened in 1979. All the license plates were like that, cryptic references to other rides and the year they opened. We had some fun studying and working them all out. 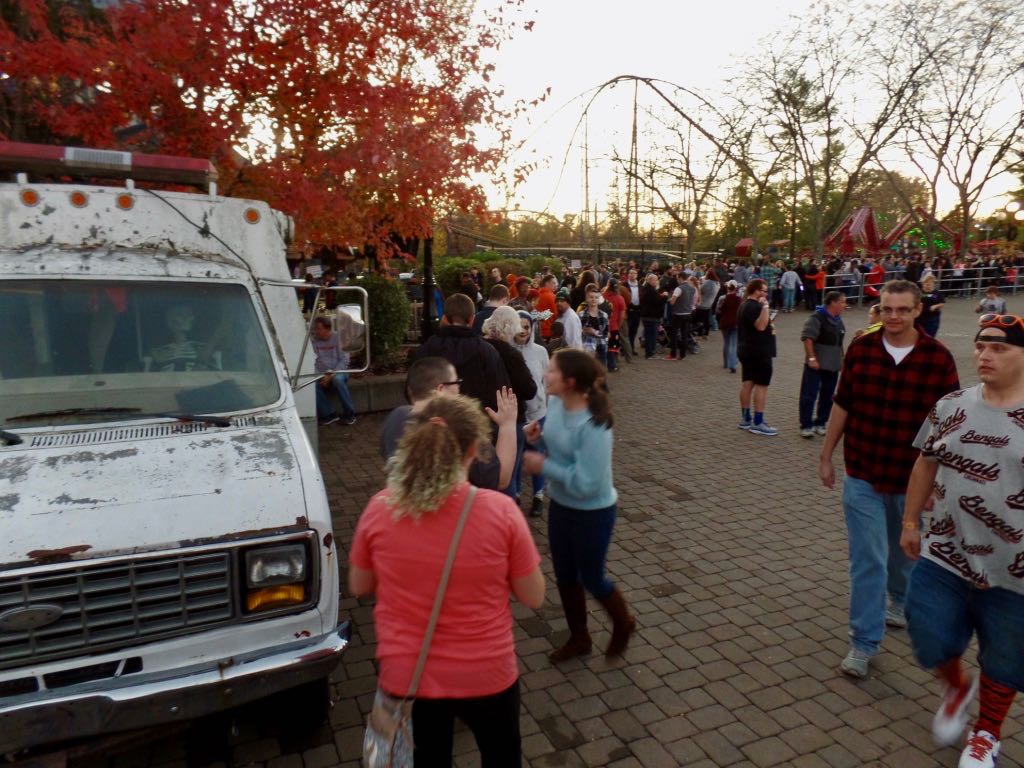 We hopped off the Antique Autos, went to the bathroom, and joined the Vortex queue for an after-the-park-closed ride. The queue had spilled out past the overflow line and here just wended its way ... actually almost to the bathrooms, which was convenient for us. 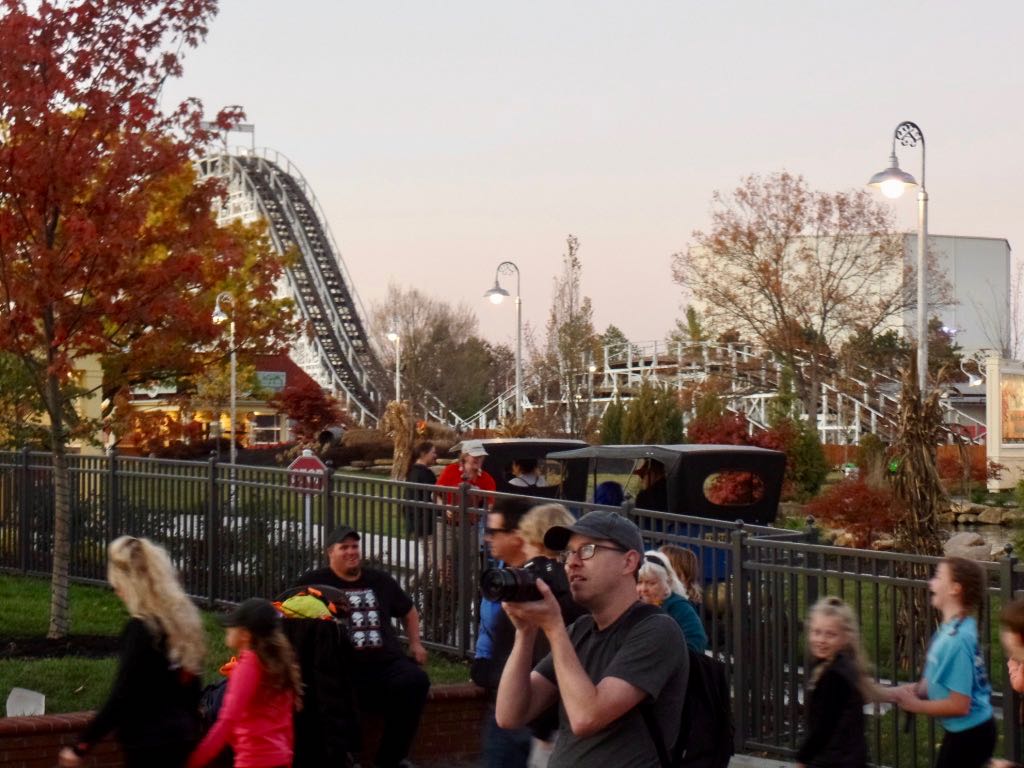 View of the Racer and the Antique Autos from Vortex's farewell queue. Also notice the guy with the serious camera there. 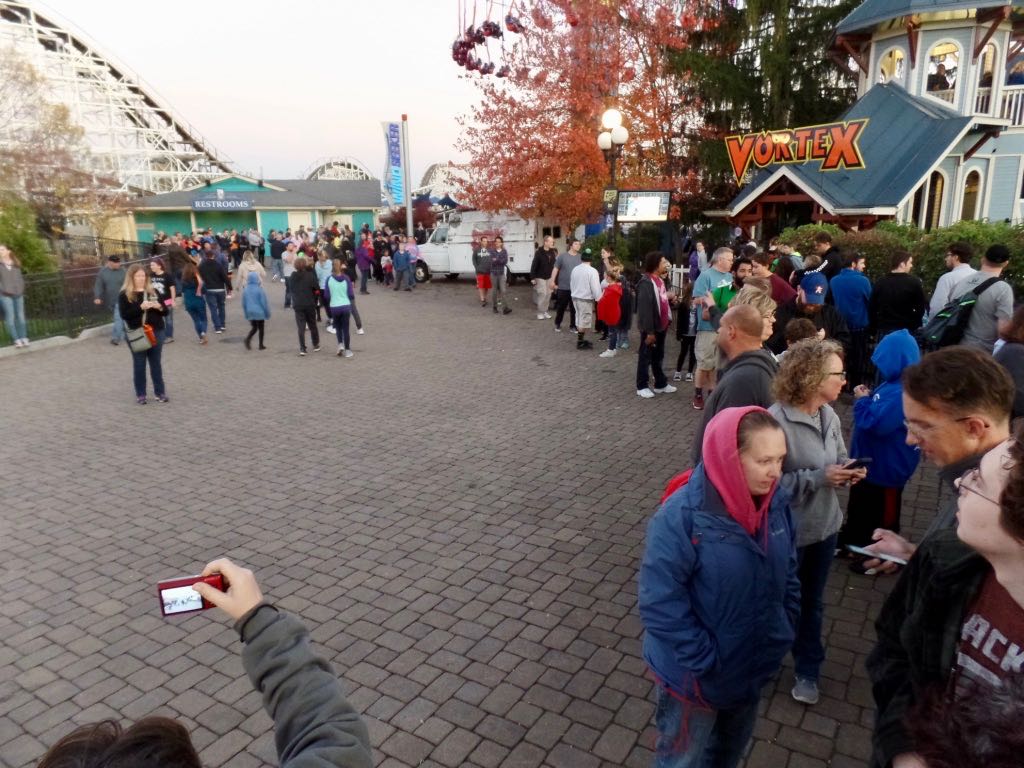 This picture must have been taken about 7:00, when the park officially closed and they'd stop letting people join the line. Gives some idea how much overflow overflow line there was. 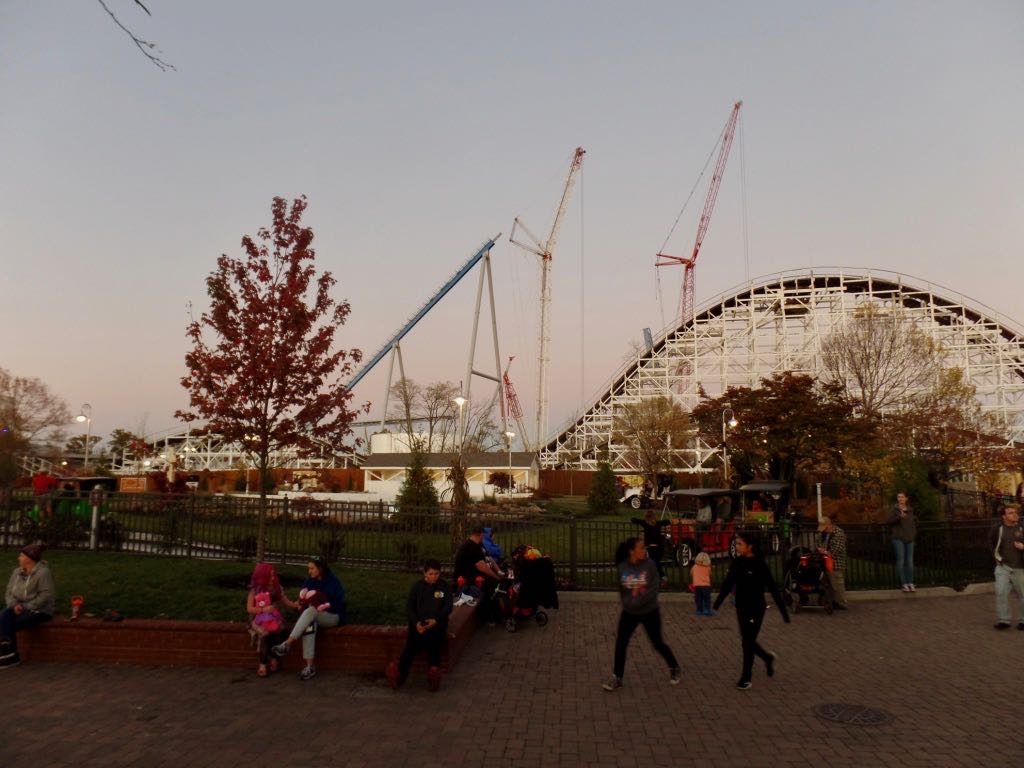 A look at Antique Autos, Racer, and oh yeah, the start of the lift hill for Orion, Kings Island's 2020 roller coaster, looking like a good start on a Roller Coaster Tycoon project here.

Trivia: A part of the deal by which the United States federal government hired steamships to carry Post Office mails in the 1840s was that subsidized steamships would be built in order to be easily converted to military purposes and released to the US Navy in case of emergency. Source: The American Mail: Enlarger of the Common Life, Wayne E Fuller.