Boxing Day! We woke up not quite so late, and had a lunch of leftovers. The fake ham turns into really good sandwich stuff. It wouldn't be a mistake to make some of these just for later sandwiches.

bunny_hugger was upset that her brother's packages were still languishing in the Brooklyn Post Office. We'd hoped they might get to him while we were still at her parents' house and, it happens, none would arrive until New Year's Eve. Some are still undelivered. So, again, this is what happens when we let Republicans sneak into positions of responsibility.

bunny_hugger had asked her parents about having a fire. It turns out they haven't been using their fireplace, even after geting the chimney cover that keeps birds from flying into it. Her father explains it's too hard to get a fire started; he has to use his flamethrower, which is not repeat not my comical exaggeration or flippant description but an actual thrower of flame, and that's a bother. We really feel like something's gone wrong if a flamethrower is the only way to start a fire. But he got the flamethrower out, and the wood in, and we got to enjoy that much of the day, while her father watched the other two episodes in that Rocky Jones adventure.

But we had a sad realization.

bunny_hugger and her mother didn't think there'd be time to decorate Christmas cookies and also play a round of Mice and Mystics.

I went for another early-evening walk, thinking I could explore some neighborhood streets I'd missed before, and ended up going down a long and twisty dead-end street that had almost no decorations. And one where a fallen tree had smashed the concrete divider separating the street from the river below. (The rebar cables were still in place, and it's a neighborhood street so I guess it wasn't too dangerous, but I'm still surprised there weren't Jersey barriers in place.)

And I got back to a sore point in the family. A couple weeks ago

bunny_hugger's parents got a new cable modem from their ISP. Why? The e-mail, as we heard about it, was that this was a free(?) replacement for their old modem which would stop working(?) because of the reasons. Her father had asked us to install it, when he got the thing, and got all reluctant and shy about answering our follow-up questions. But she had agreed to it, and just asked not to do it Christmas Eve or Christmas Day. She had wanted to put off changing the modem --- a process that her father swore would be easy because the cable company said it was only like six steps --- until after her parents went to bed, the better to save time for decorating Christmas cookies and maybe a game. I suggested we should do it now, though, and it turns out it was probably for the best that we did.

Because the process was not the simple matter of plugging in things that we'd been promised. The plugging things in was easy, to be fair. The only unsettling thing is that after we took out the old modem, two green lights on it stayed on, even after it was unplugged. This turned out to be a battery. But plugging in the new modem? We put it in and waited for the lights to turn a solid green. And waited. And waited. And waited.

bunny_hugger got anxious about the waiting, and I did not want to deal with that, so told her yes, she should go make cookies. Now.

Eventually, in time, two of the lights would turn a solid green and one a fluttering green, so I guessed that maybe was close enough? And went to the next step on the guide. For this, activation, step, I needed their account number. Had her parents gone to bed we would have been stuck. I heard them speculating that I was on the phone with tech support and figured I had better things to do than correct them.

Getting the modem to connect went fine. Getting it to bridge mode, so they could use their wireless router? ... Well, I followed the directions, which included, wait. And waited. And waited. And still that last green light fluttered instead of stayed solid. I gave up and tried reinstalling the old modem, and that didn't work. And, so, finally went out, complaining that now the Internet was gone. Which also took out their landlane phone, since their landline phone is actually an Internet-connected thingy.

bunny_hugger's father called tech support on his cell phone and I spent about an hour on that, while overhearing

bunny_hugger and her parents talking about how horrible all this was and what agonies I must be going through.

It took a bunch of talking, as she was soft-spoken and I'm soft-spoken. It did reach a weird state where, on their computer, some sites --- Google, Facebook --- wouldn't work, but a few others did. But that cleared up when I restarted their computer. Some other things needed restarts, but other things, like my laptop, didn't. This might be a matter of waiting long enough. The ``easy'' installation guide gave absolutely no hints about how long any step should take. And maybe it was all a matter of patience. But if a step needs more than, like, three minutes of just waiting around the guide should give a hint.

bunny_hugger's father would later call to complain about the unhelpful installation guide, and they gave him a $10 credit.

What I did not know, and what made the whole emotional charge of this more intent, is something that happened just before I went out for my walk. I'd been upstairs bundling up and such.

bunny_hugger, who was already bundled up for her walk, got into a fight with her father, one nominally about some N95 masks he had given her and that we weren't using and now wanted back. Really about his anxiety that we weren't going to install the modem and were going to keep blowing him off. While they were feeling a bit less bad by the time I got back from my walk, it was still sore, and that surely fed her anxieties that set me off when the modem needed fifteen minutes to do anything in the first place.

So. We were glad enough that we'd done this before her parents got to bed.

bunny_hugger regretted that we'd done this in the evening instead of waiting for Sunday, although possibly her father would have exploded had we waited another day.

bunny_hugger and her mother decorating the last of the Christmas cookies, and her father switched the satellite music channel from the holiday-mix (which had too much 80s stuff for his tastes) to the 80s channel. I have no explanation for this phenomenon.

We had a relatively earlier night, which is not to say her mother got to bed before midnight.

That's wrapped up Bronner's. The next important thing we did in November 2019 was the Silver Bells in the City parade, so we're now up to the weekend before Thanksgiving that year, if you'd like to track just how far behind I am. 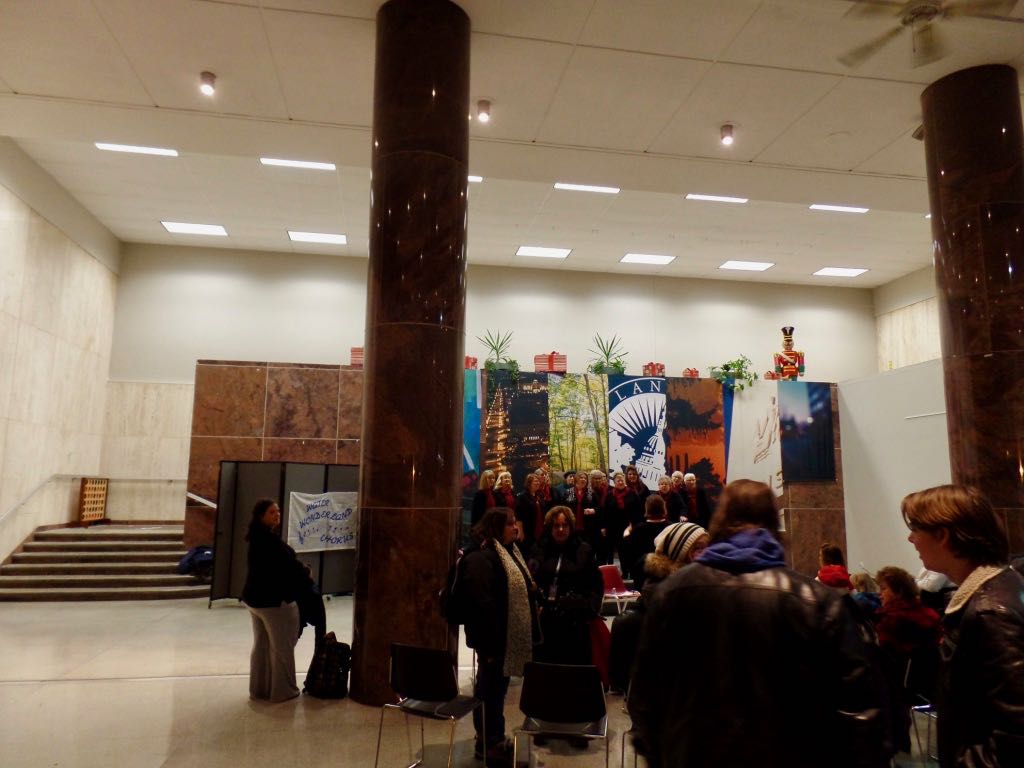 City Hall! Since the City Market had closed, they used City Hall to give people a place to use the bathroom and get free cookies and punch and whatnot. Note the stairs are much cleaner than the previous year: no mysterious box marked M*A*S*H 4077. Just a giant Connect-4 table. 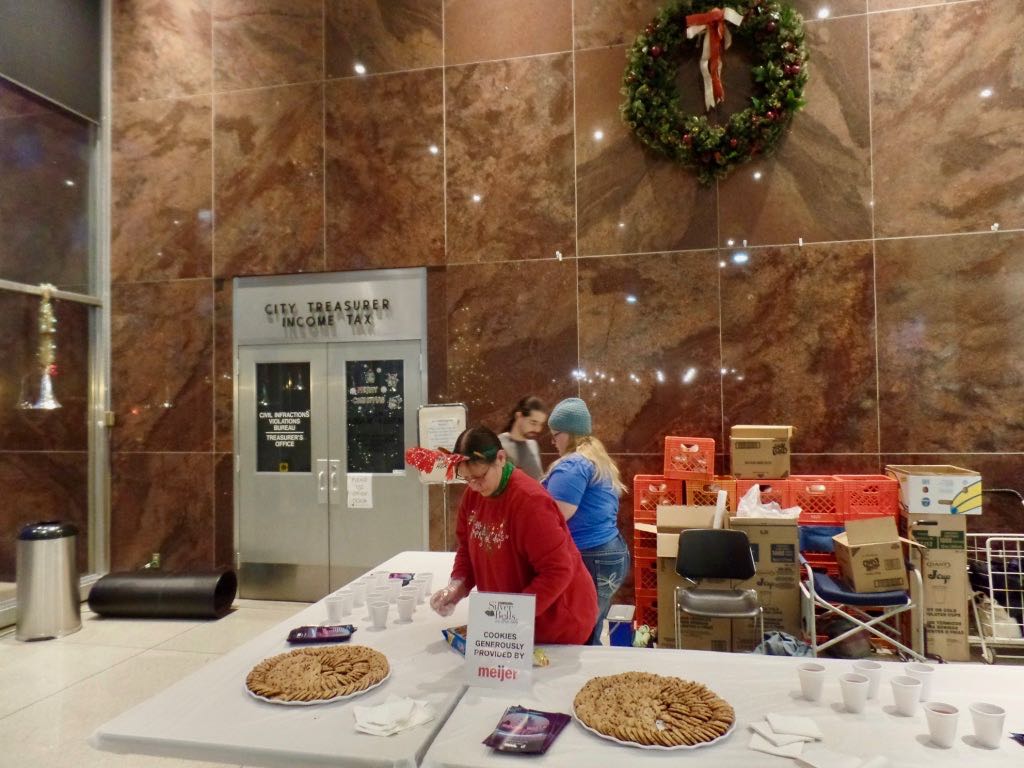 And, see? Cookies, right by the City Treasurer's office. Also, I sincerely love that 1950s style of public office lobby. 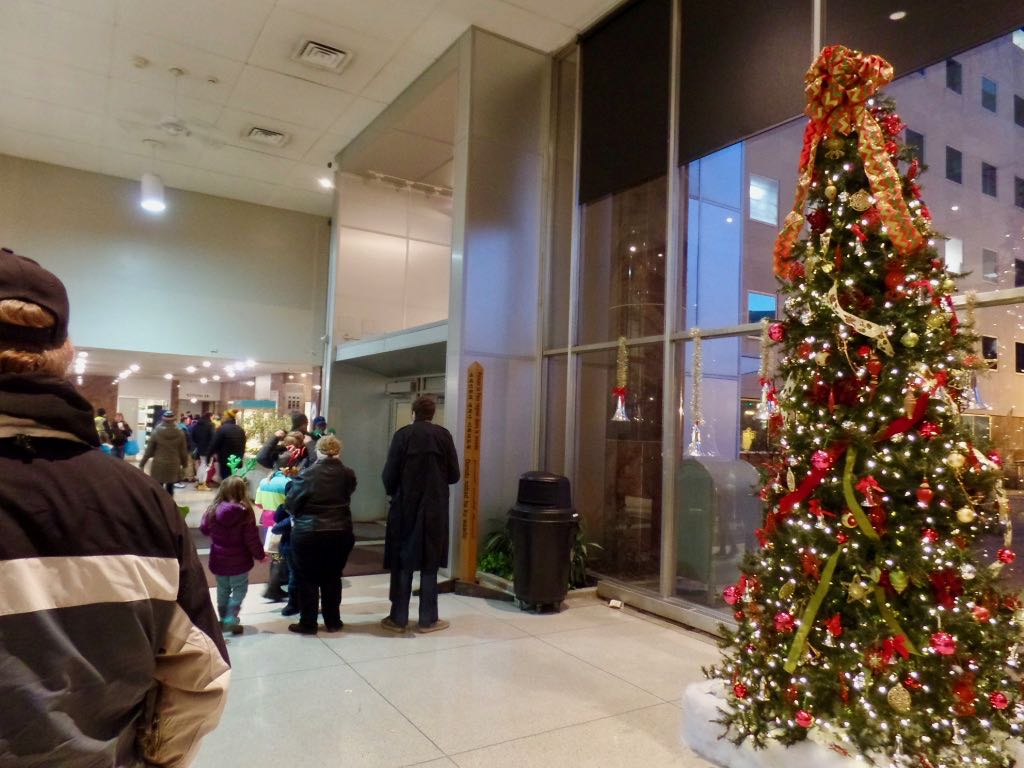 More looking around Lansing City Hall's lobby, which doesn't show any of the signs of long-deferred maintenance that's made the city think about decamping to another building. 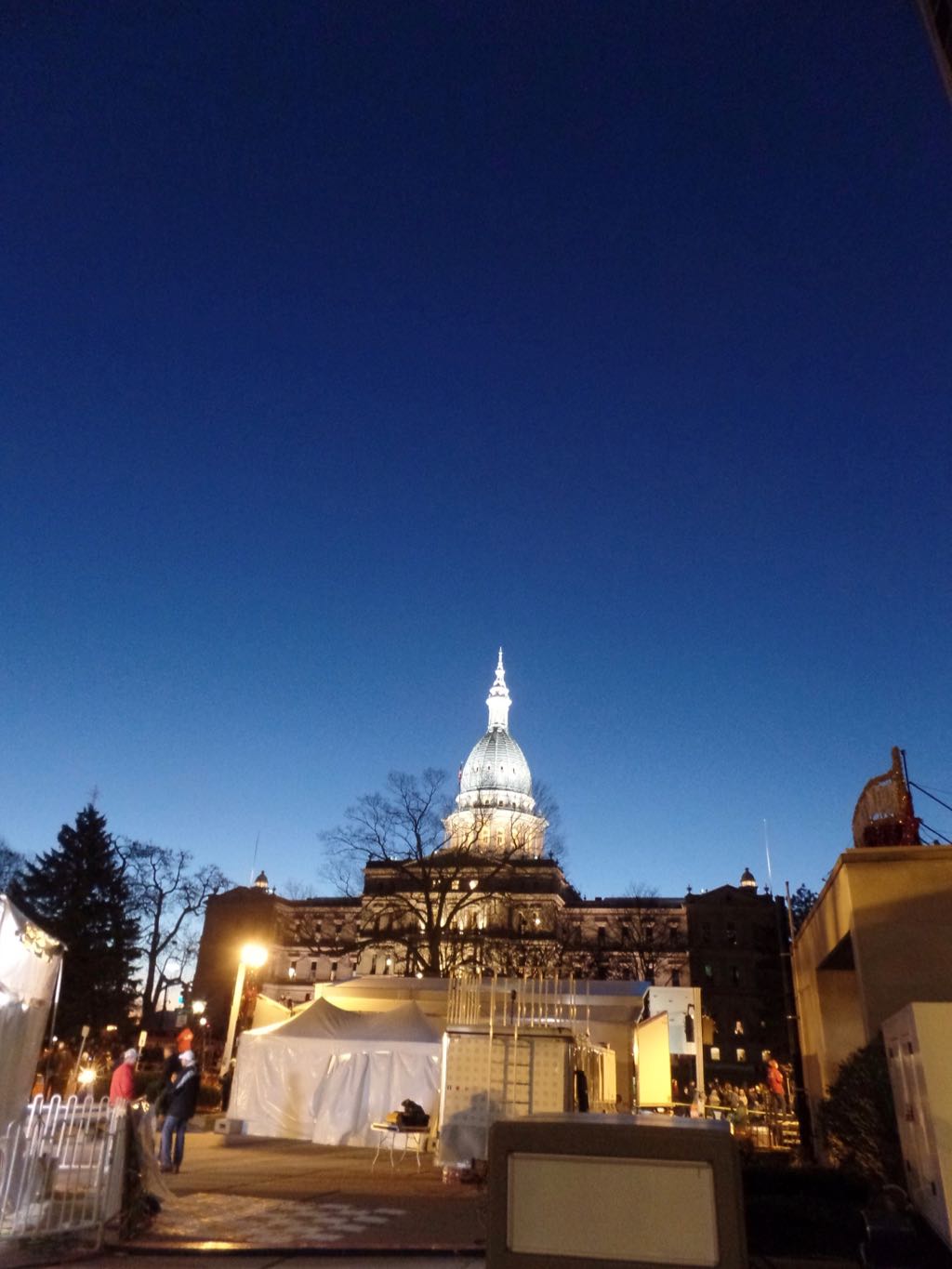 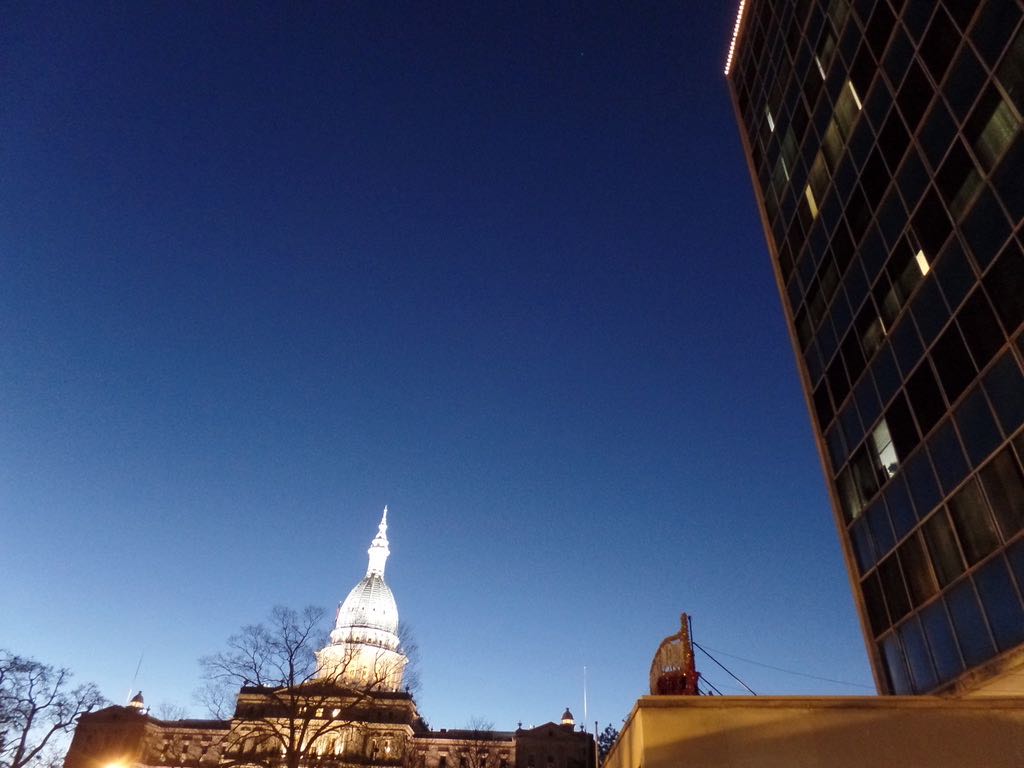 State capitol on the left, and City Hall on the right. Both represent eras in which older city structures were being demolished in favor of the sleek and modern, with the capitol being your classic Second Empire structure and City Hall being a 1950s Internationalist building. 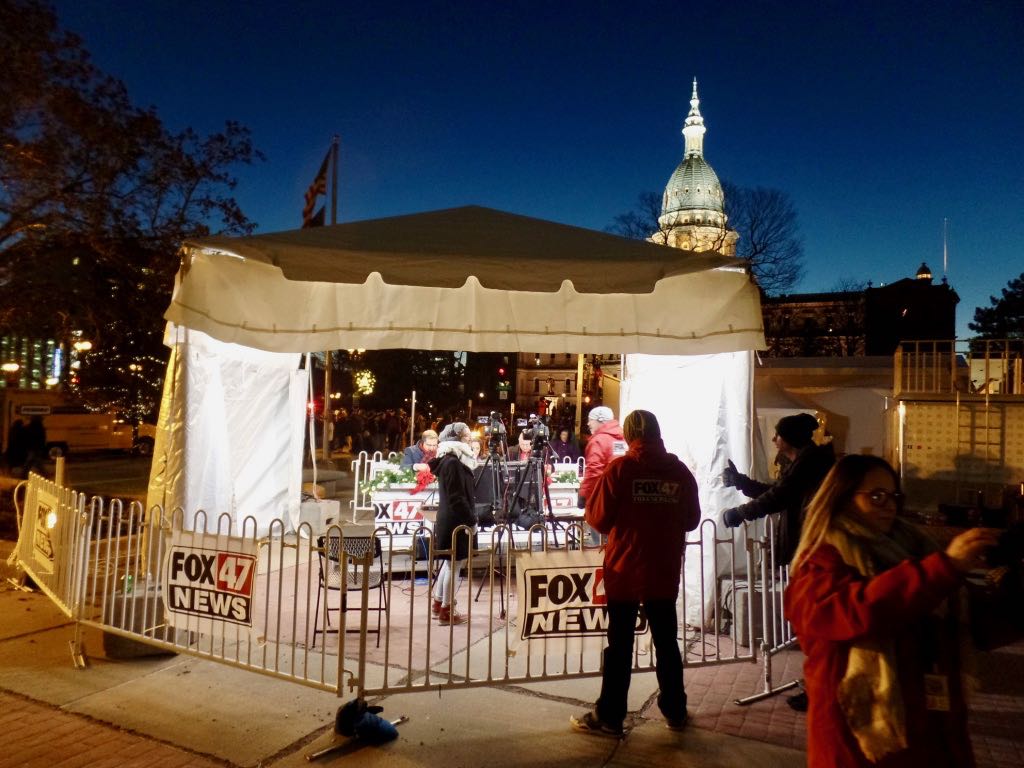 The tent from which the local tv anchors report on the parade. I'm not sure we ever quite knew where they were, before. 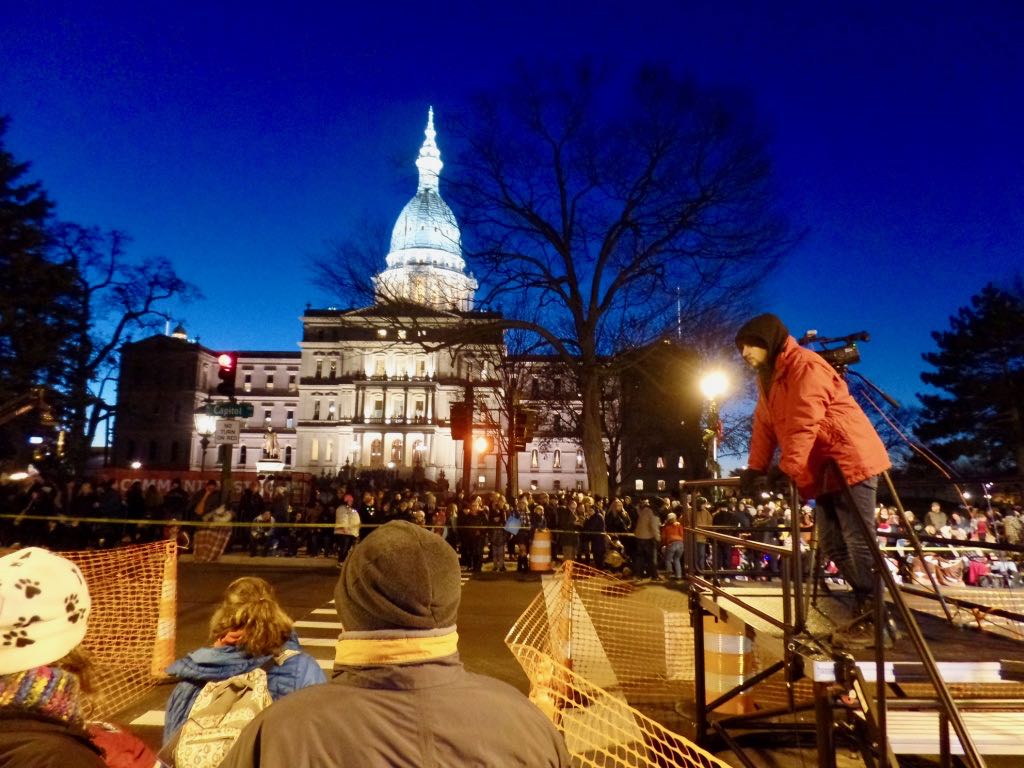 We got our usual spot, right behind the tv cameras, so we had an almost unobstructed view of the parade. 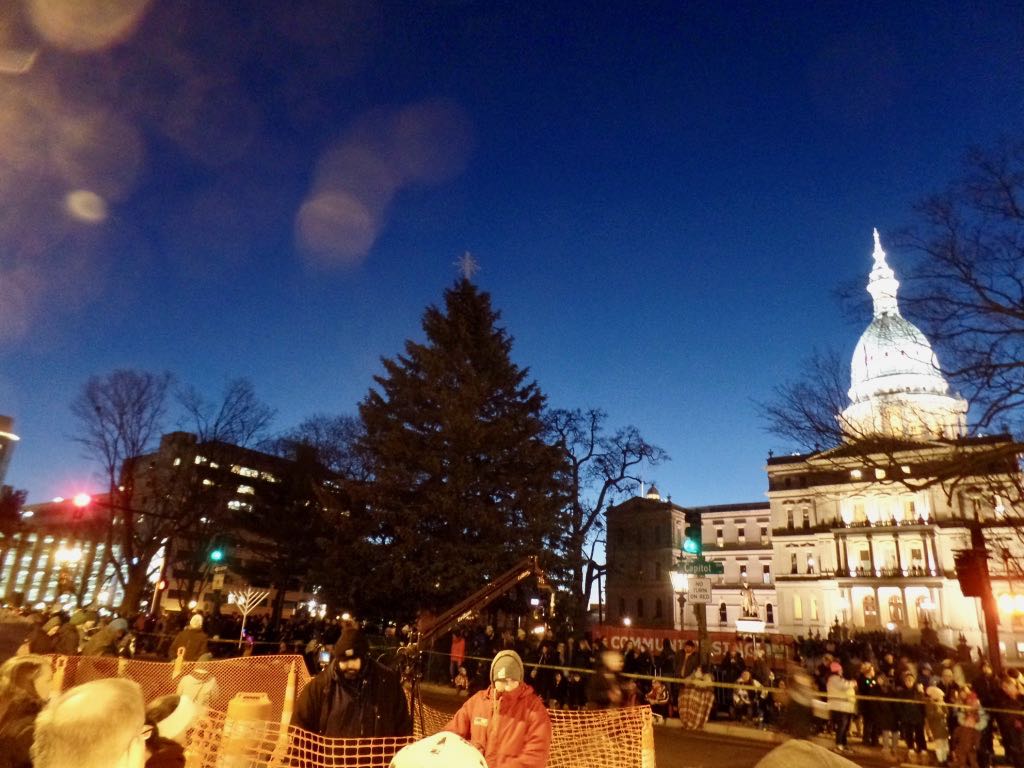 The 2019 State Tree, before its lighting, ready for the parade to start. Note the topper is correctly aligned for now. 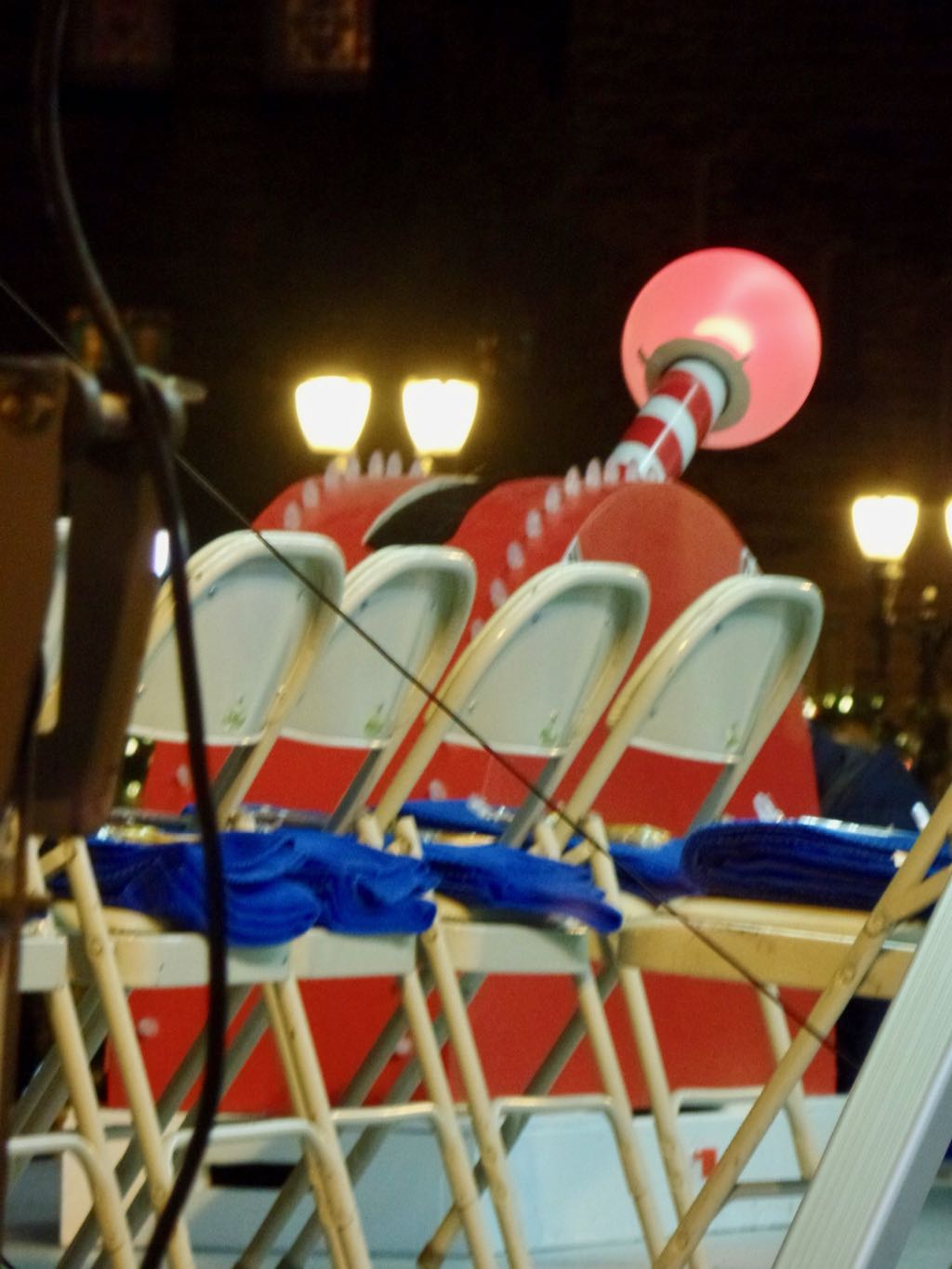 The giant lever that the Mayor's to pull in order to light the tree. 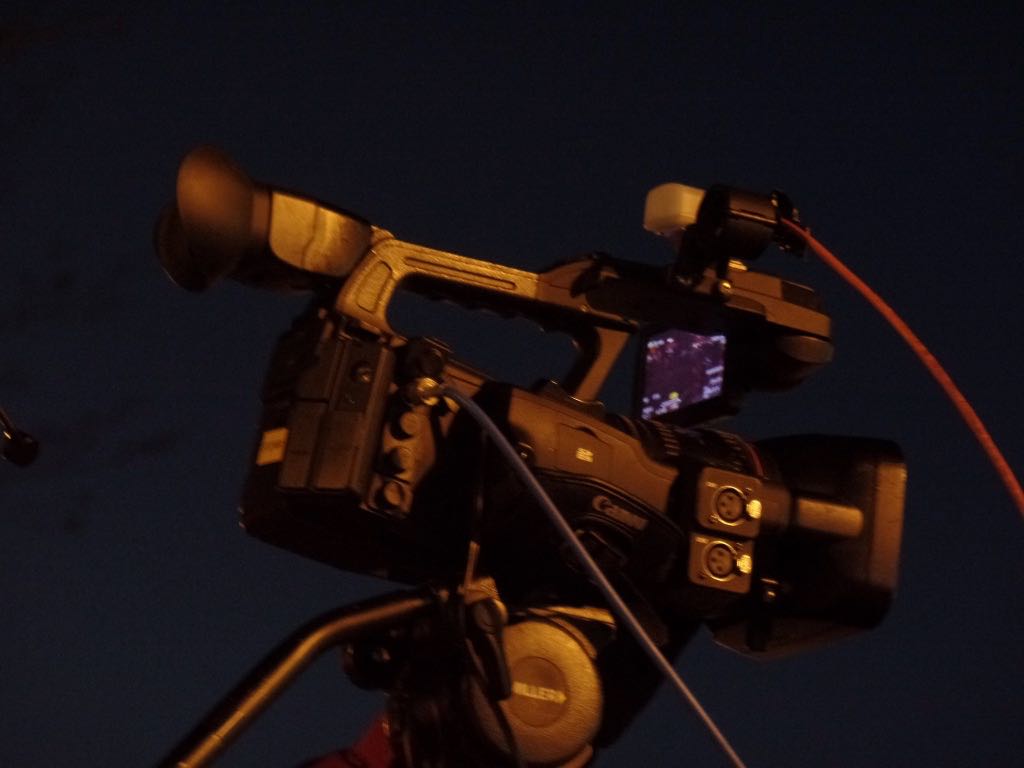 The tv camera caught in the sunset and street light. 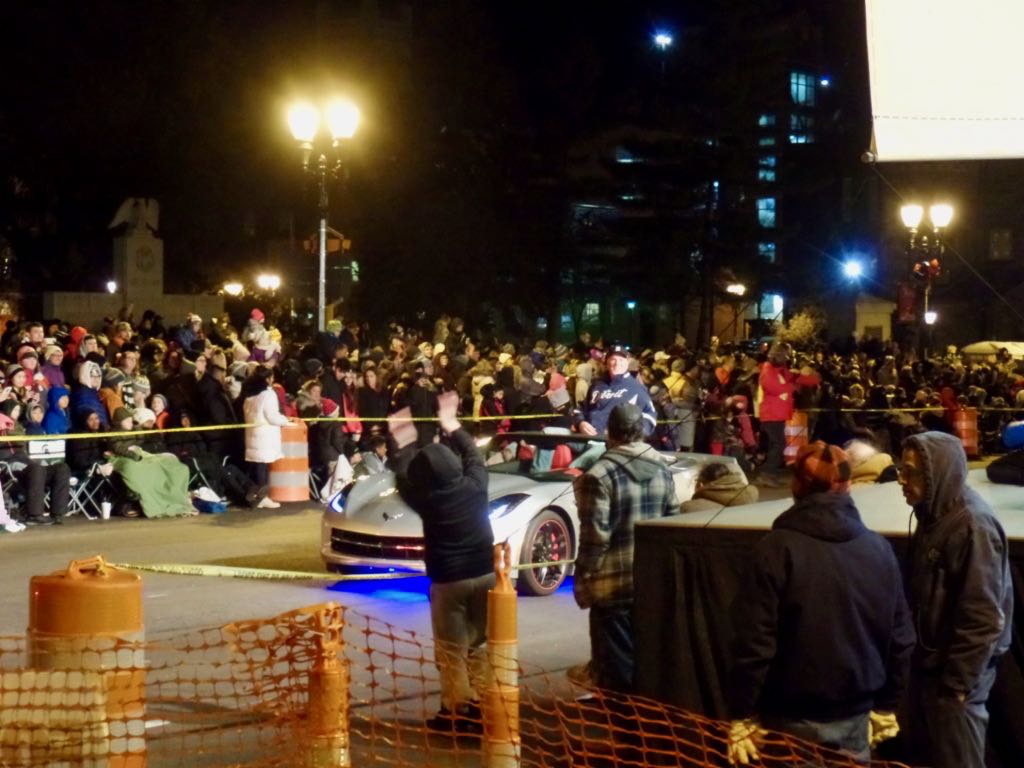 And we start! Here's the arrival of ... well, that can't be the grand marshall, right? He'd be in a horse-drawn carriage. Maybe it's just a sports guy? Somebody, anyway. 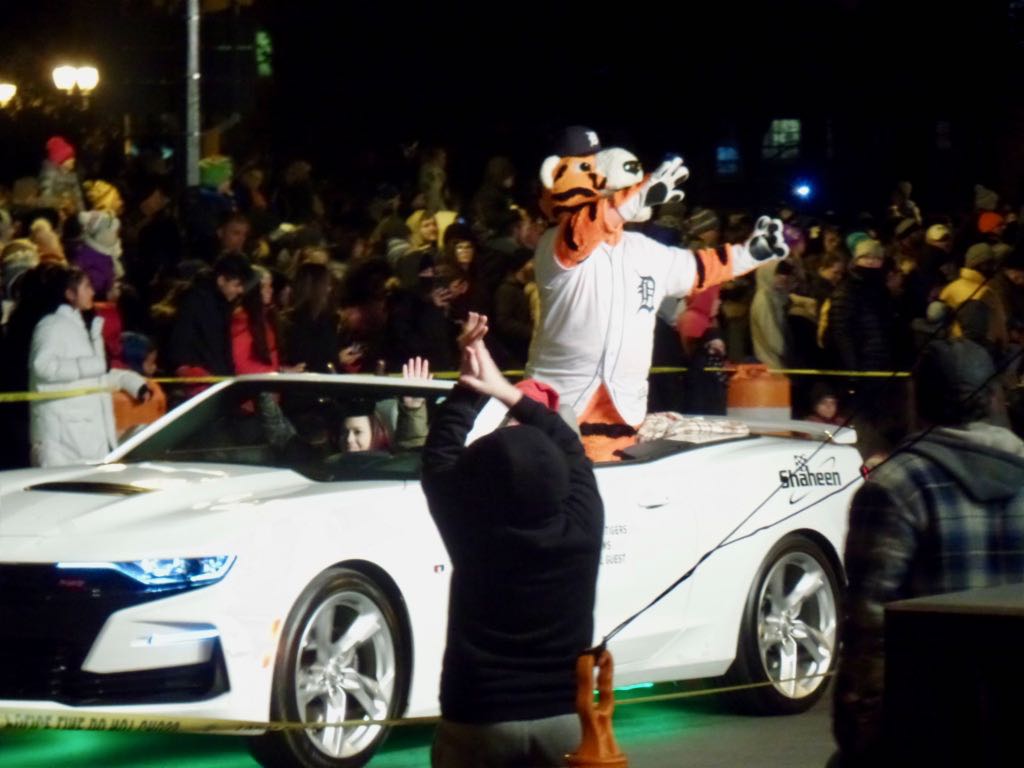 Trivia: At his inauguration as President of the University of Michigan in 1852, Henry Tappan declared one of his highest priorities the establishment of an astronomy program, and plead for funding. Detroit donors would contribute $22,000 to what would become known as the Detroit Observatory (despite it being in Ann Arbor). Source: The Long Space Age: The Economic Origins of Space Exploration from Colonial America to the Cold War, Alexander MacDonald. Which by the way is one of those books you get when an actual historian looks at space history, as you'd think just from how its focus is how space science fits into a pattern going back hundreds of years. Strongly recommended.

Currently Reading: The Best of Archie Comics, 80th Anniversary Edition, Volume 1. There's a 1950s story where the girls are doing terrible in history, until they hit on the idea of treating historical facts as gossip. And you know how the wimmin-folk love their gossip! By the next test all the girls are absolutely 100% on everything. So, first, yeah, oink. But second, uh, yeah, recasting something as the kind of thing you find it really easy to pay attention to and remember? That's just good learning and if you're doing an event-based history then turning it into a gossip stream is probably a legitimately good approach.