We stayed one more partial day, through to the 27th. In a normal year we wouldn't feel the need to stay so long, since we'd have seen

bunny_hugger's parents for Thanksgiving and been over at least once to make cookies and besides there'd probably be the last Fremont tournament of the year to get to. We did have a last brunch --- scrambled eggs again, with cinnamon rolls that

bunny_hugger's mother cursed as too much trouble to make from the kit. And we were able to finally burn the corrected CD of

bunny_hugger found some CDs her brother had burned, a decade-plus ago, that include some early versions of songs he'd release commercially. Also a couple covers that he didn't have anything to do with. She's a big fan of her brother's music, past what you'd expect from simple family pride. Getting some unreleased demos? This puts her way up in the bootleg community. We did not take the discs, but did rip copies.

So we bundled up and put things in my car, including a lot of leftovers plus some bread intended for dips and judged unsuitable (it turned out to be some commercial naan), and agreed that, as annoying as it was to quarantine for two weeks ahead of all this, it was worth it and we were glad that we'd done it. That maybe if we're fortunate we'll be able to visit again in the spring. Her parents should be in the higher priority groups of the general public. We'd feel reasonably safe visiting them once they're vaccinated. And that finished our Christmas visit with her parents.

We might have gone another day still, really. The serious constraint would be how comfortable we felt leaving our pet mouse unattended at home. The only thing to seriously worry about would be his running out of water, but between two filled water bottles he shouldn't have run out. But we had something we could only do that Sunday.

Back home we found the power had gone off at some point.

bunny_hugger had seen some complaints about power outages on the neighborhood Facebook group, but hadn't paid much attention and they didn't seem to be particularly close to us. Between the disruption to our room light timers and the very light snow we hadn't been there to clean we were advertising the place wasn't occupied. But our house was intact, and untouched, and our mouse happy to see us, and our rabbit happy to be back home again.

We were barely settled in at home before setting out again. Our destination: the Potter Park Zoo, in town. It's not far away --- it's quite literally walking distance, now that I've learned how to walk around town --- but we drove, for fear we'd have to wait in the cold otherwise. The Zoo had its annual Wonderland of Lights display, but the 27th was its last day. This was why we had to come home.

We also had to take our chances waiting. To avoid crowds the zoo was giving reserved times. Reservations were free, but filled up fast, and we didn't get ones before they were out for the day. But they were also letting in ``some'' people without reservations. We went down for opening, hoping that sometime there'd be some people who reserved a slot without using it. It turned out a lot of people went just on the chance they'd be allowed in. And that people from the night before, who had their visit interrupted or cancelled by the power failure, were also coming in.

Still, they let the whole line of un-reserved people in, and in pretty short order. We have to suppose they'd set ticket reservations at a low number. And, since we'd gone for opening, we had for the first time ever plenty of time for the lights. Three hours, if we'd take it, which we did. We'd expected, as has caught us before, that we'd be walking around the zoo at 8 pm and then the music would stop and the lights turn off. This didn't happen; we were walking around the zoo, even as late as 8 pm, and a few minutes later, and the crowds thinned out, but they never did turn the music off on us. We did see the gift shop close, at least, although not before we'd visited and I'd bought a wool ornament, one in the shape of a rhino, honoring local one-year-old black rhino Jaali.

They set the zoo up much like in past years. Nearly all the animals were in winter quarters --- we'd only see the arctic fox (one of whom jumped into a tree, where

bunny_hugger could not see through her fogging-up glasses), bald eagles, the otters, some penguins, and that's about it --- but all along the walkways and outsides of buildings were light fixtures, some of them from Bronner's. Different from previous years are that none of the buildings were opened --- no craft projects to make your own ornaments, or to pet their animal-ambassador creatures this year; no seeing if the Theio's bench was still there --- and that the whole zoo was laid out as a one-way path. This also rearranged some of the layout of displays. On the one hand, this meant we know with reasonable confidence that we saw everything. On the other, this meant we didn't have any exploring or discovery of lights; we just saw everything in the order they'd picked.

We did pause midway through our walk to get hot chocolates from the concession stand. And then realize, uh, how are we going to drink this with masks on? For a while we stayed at some picnic tables, far from everyone else. To walk again we used the neck gaiters we've gotten, so we could keep our mouths mostly covered but have it be easy to pull down and take a sip, and to stay even farther from people. That worked fine although afterwards I had the hardest time getting my real mask --- the raccoon one I've had since the lockdown started --- to stay securely on my ear again. Had to take my hat and scarf off and re-attach them several times and I don't know if the problem is the ageing mask, interference from the scarf and hat, my ears or fingers freezing in the cold, or what.

It wasn't all perfectly normal, no more than the visit to

bunny_hugger's parents was perfectly normal. But it was a lot nearer than anything since the pandemic started has been, and that was such a precious thing. 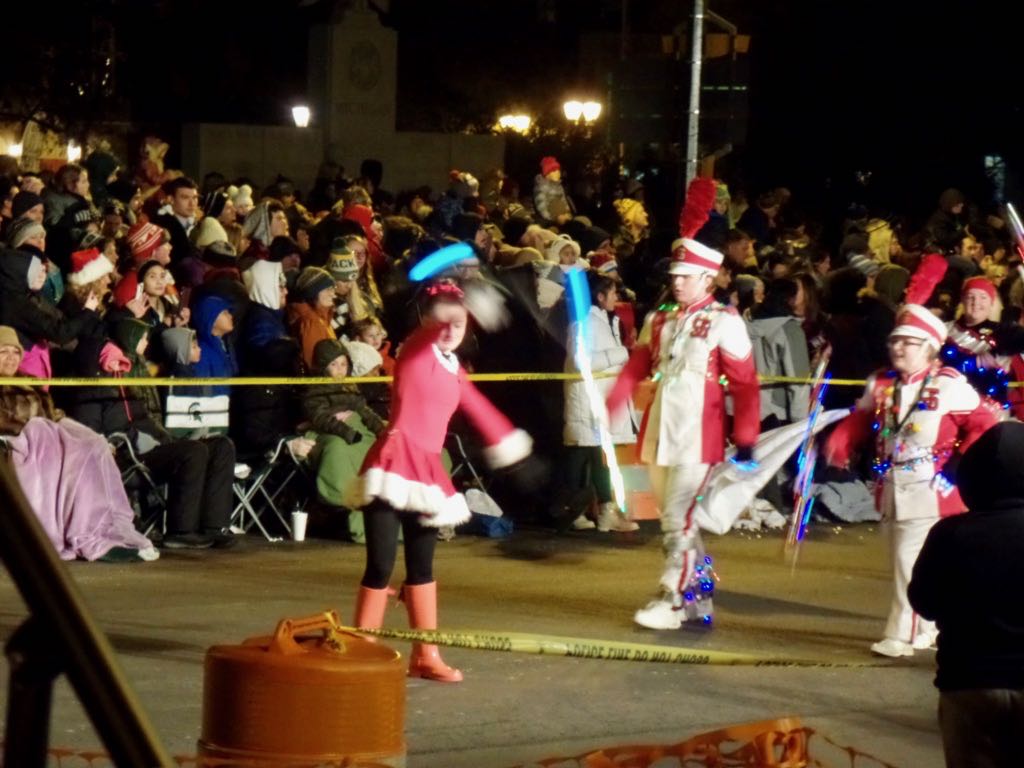 One of nine or ten marching bands in the Silver Bells parade. The baton-twirlers here have light-up batons for that great nighttime effect. 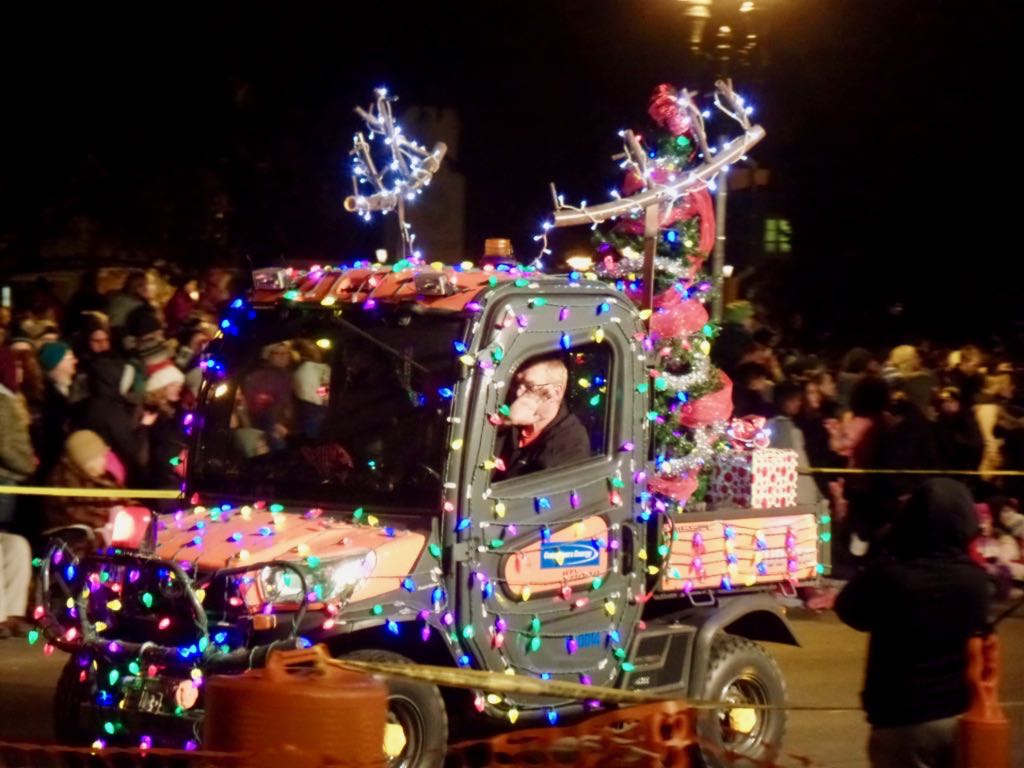 Here's a guy trapped in the power company trucklet. 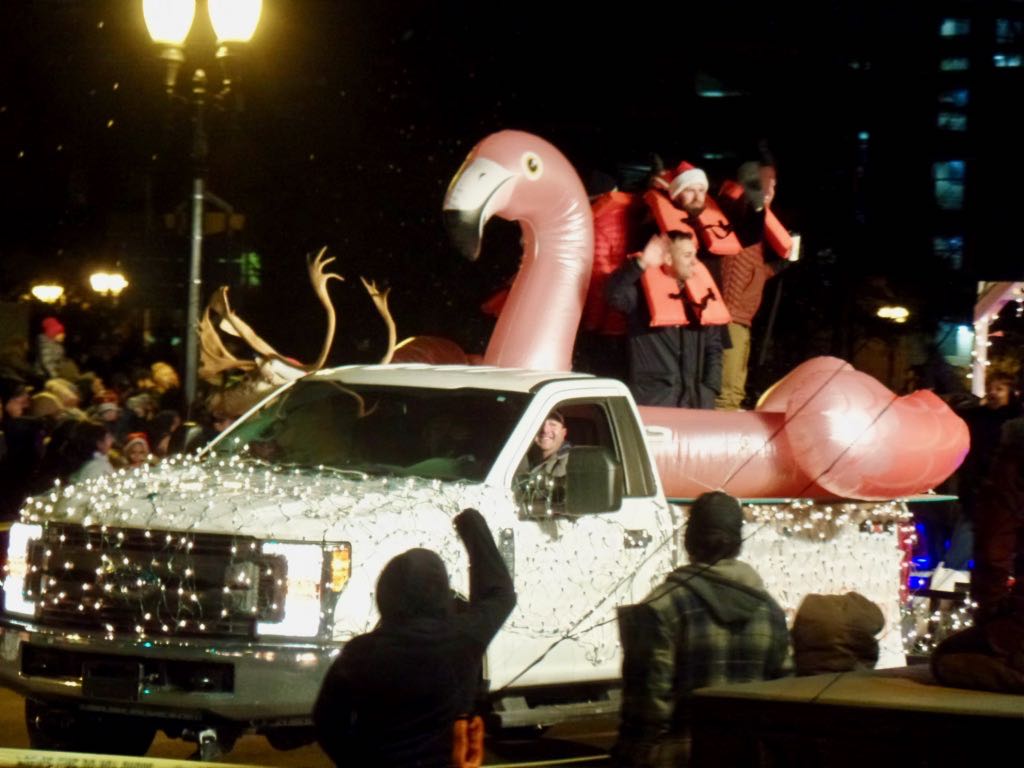 I'm sure there's good reason for the large inflatable flamingo but do we really care? 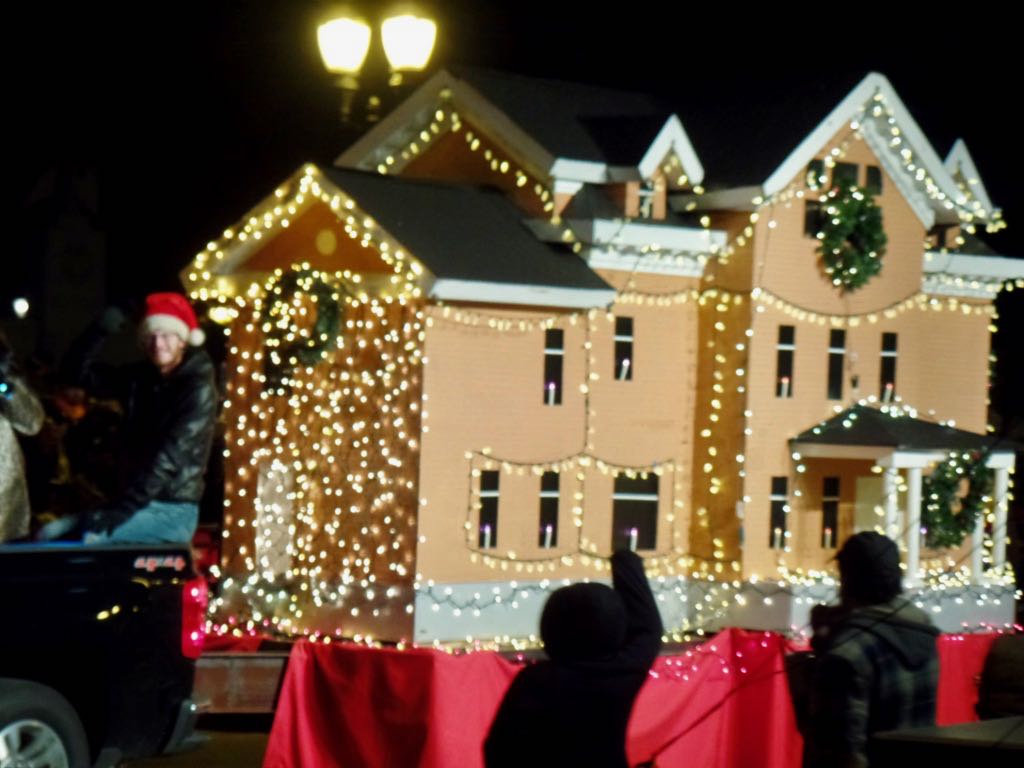 And here's the Turner-Dodge House, an historic mansion in town that you'll be seeing again in these pages. 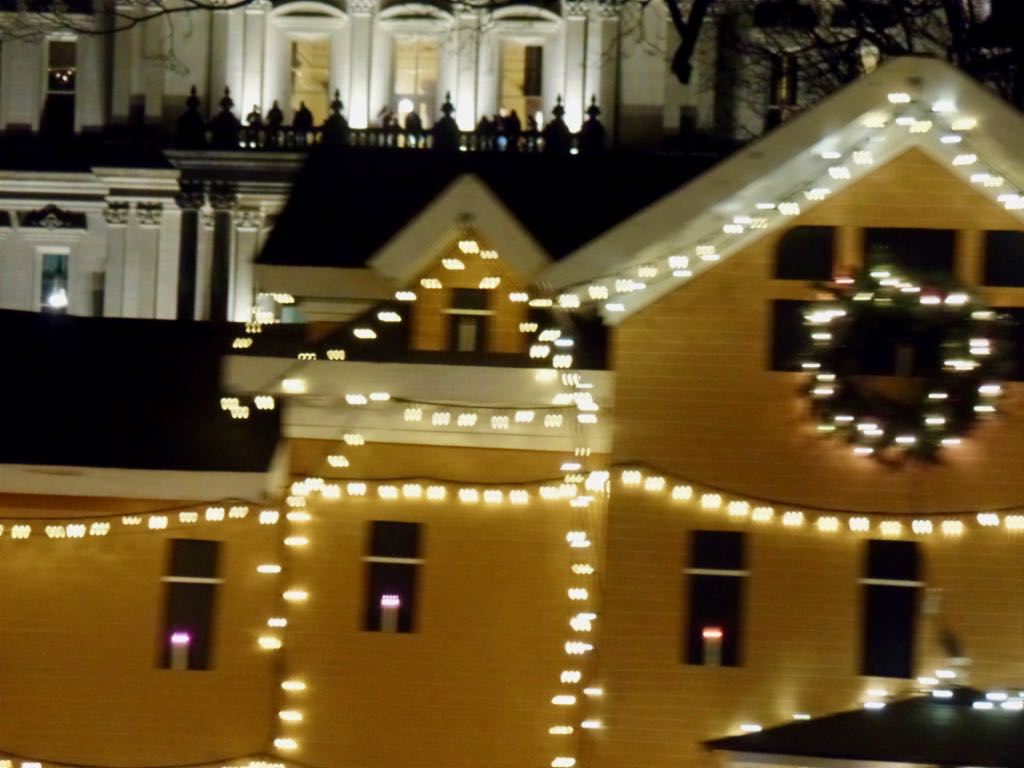 There goes the Turner-Dodge House barreling right past the capitol! 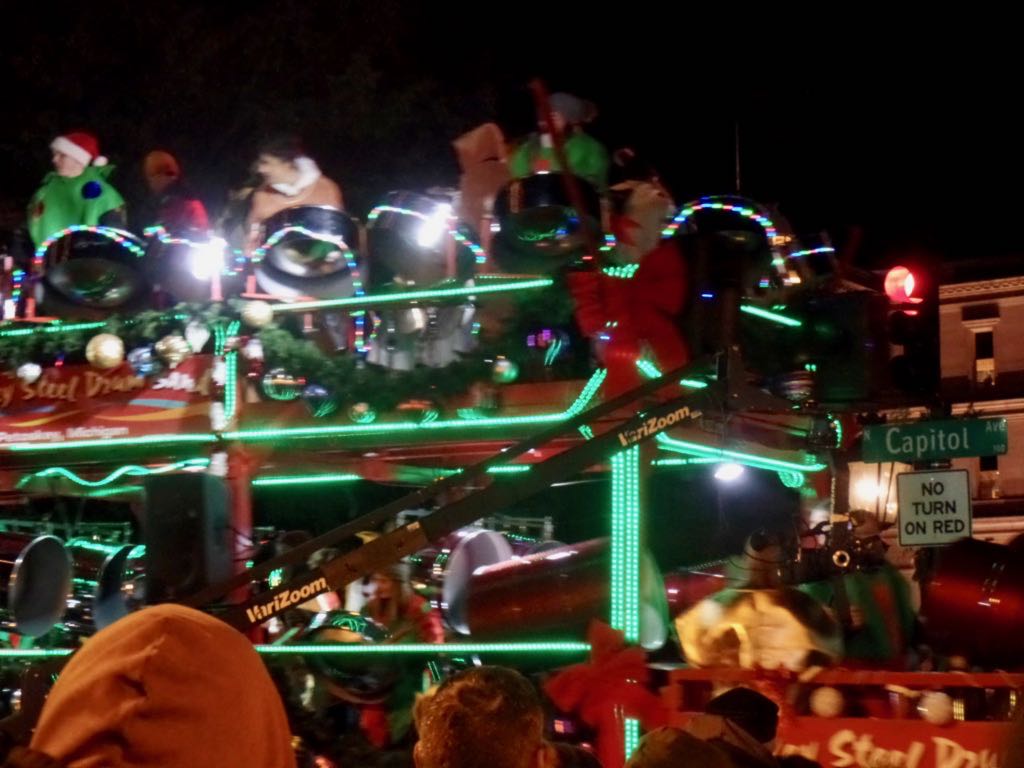 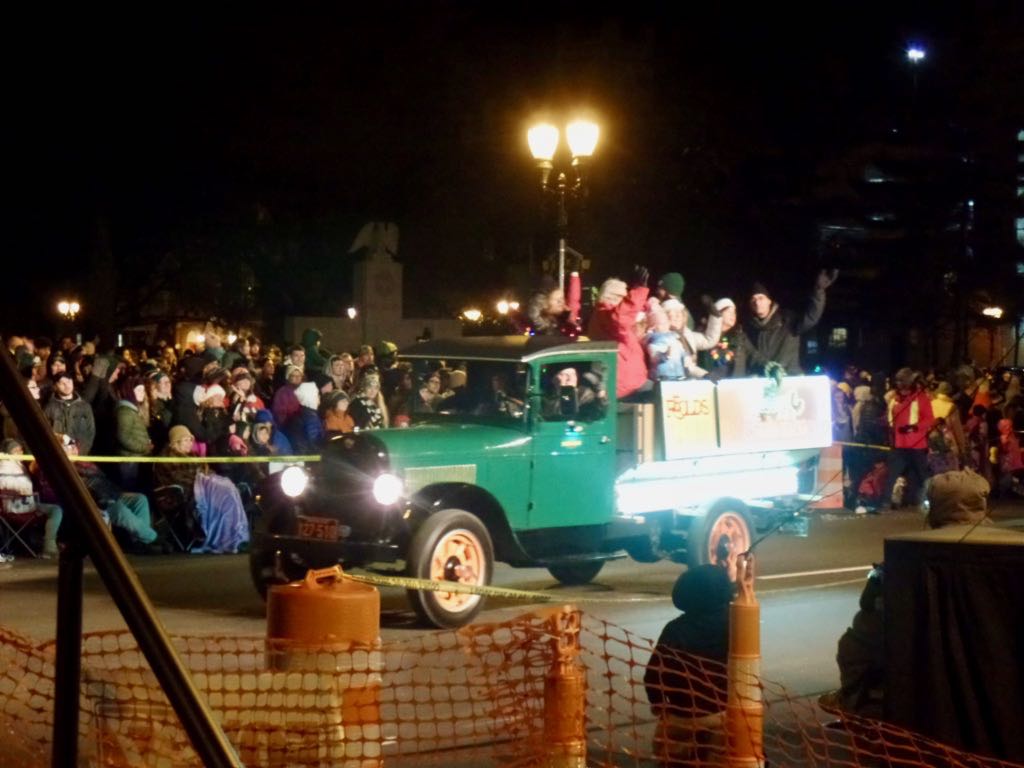 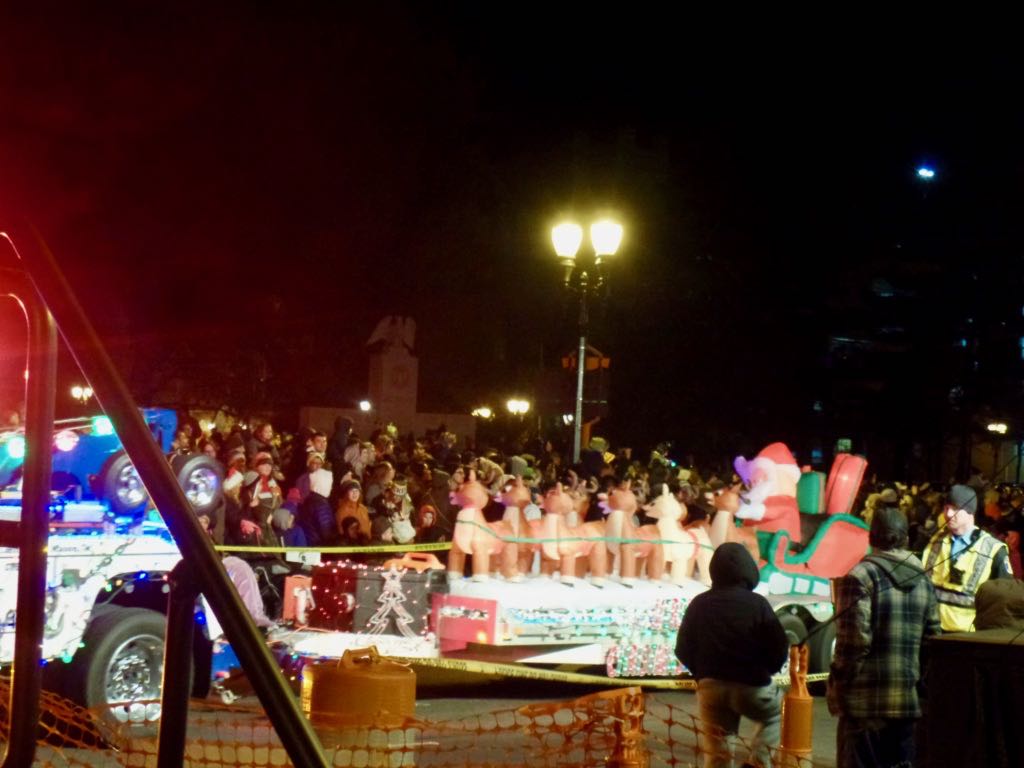 Looks like someone wanted to make sure we'd see at least one Santa before the parade Santa arrived. 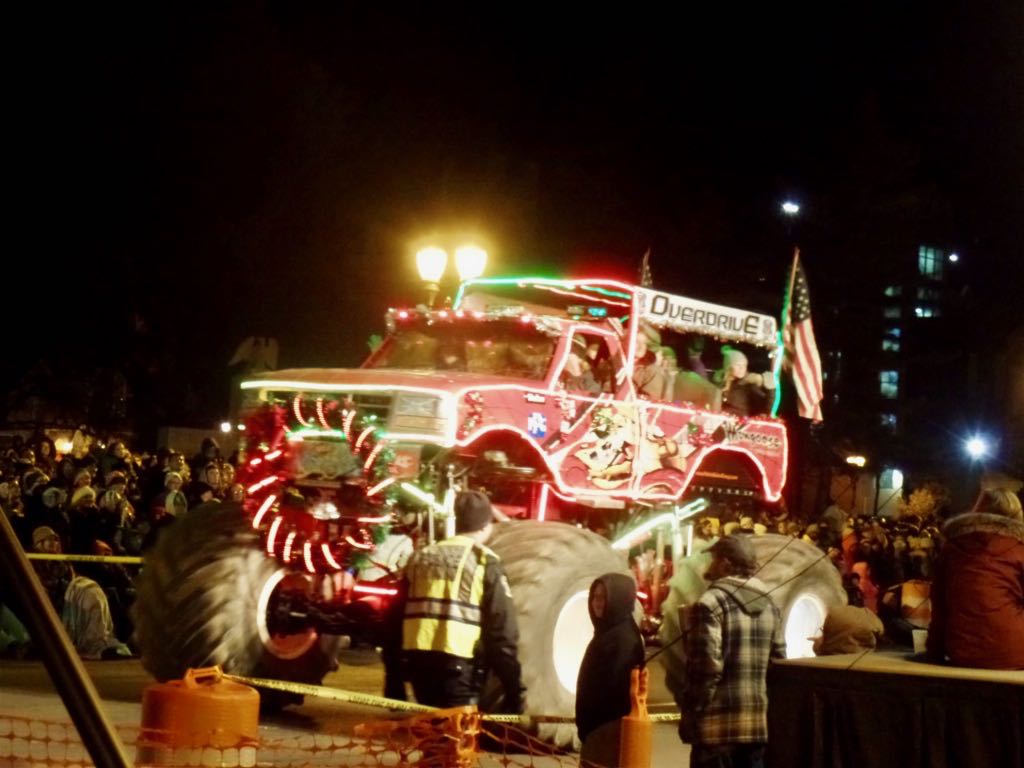 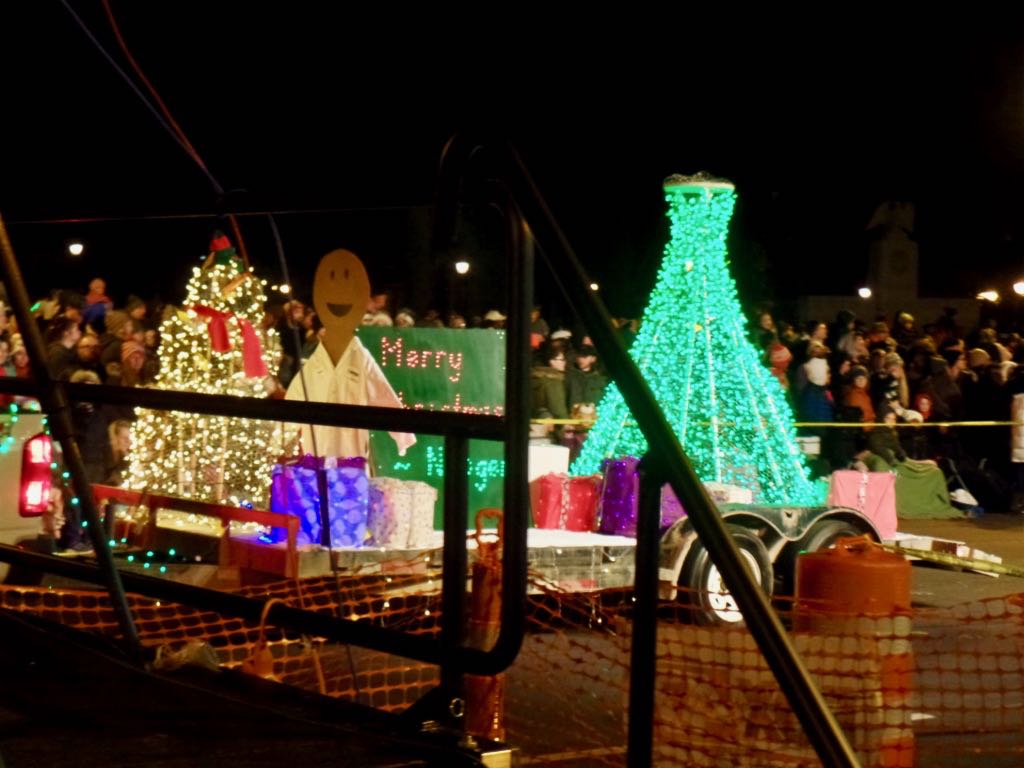 Merry Christmas from ... uh ... a Mercury Capsule! Hooray! (The float is from Neogen, one of those companies in town that was founded by the University decades ago and now does ... you know ... things.) 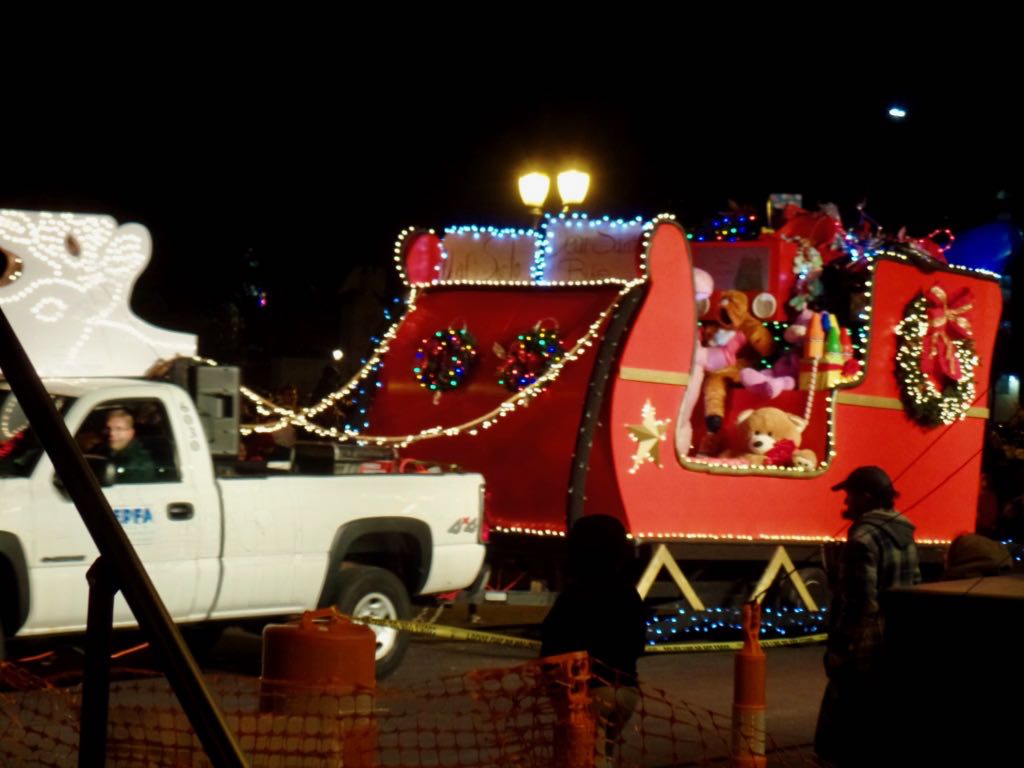 Yeah so if you're a misfit toy you're allowed to just hop up and get into the sleigh, that's how it works. 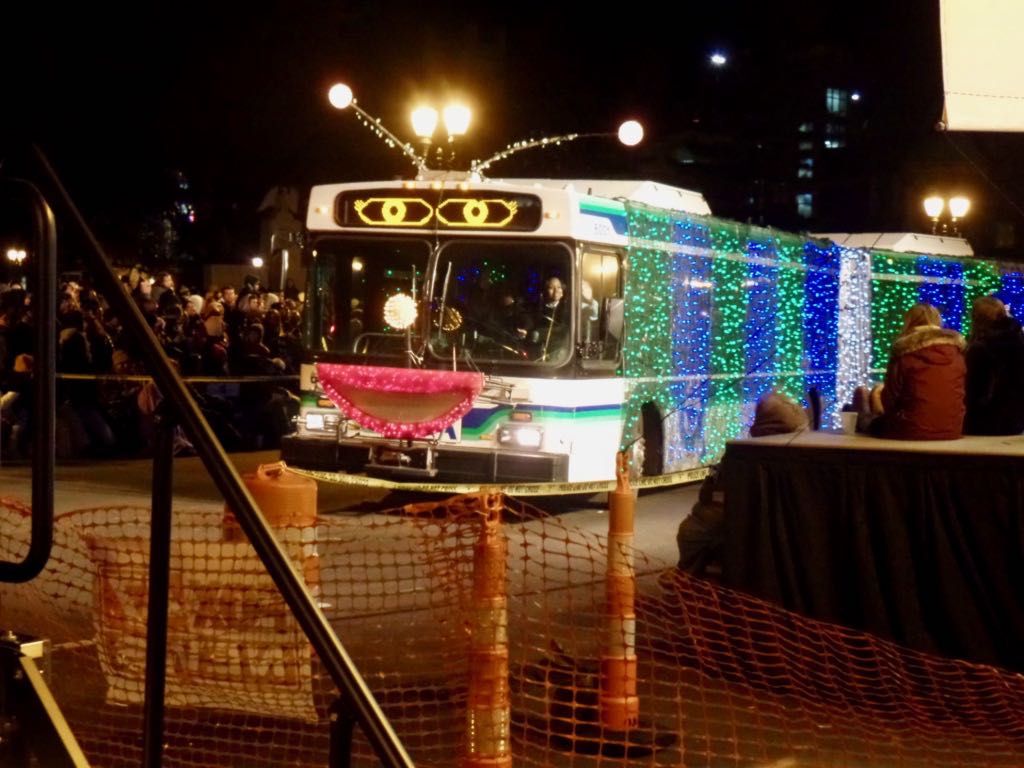 And the most popular float in the parade: the CATA-pillar bendy-bus!

Trivia: In January 1827 the Bowery Theater presented Madame Francisque Hutin in what appears to be the first public ballet performance in the United States, a grand pas seul titled ``La Barege Coquette'' between evening performances of Much Ado About Nothing and a closing farce. Source: The Bowery: The Strange History of New York's Oldest Street, Stephen Paul DeVillo. (There are other sources that date her debut to February 1827. Anyway it was scandalous and Samuel ``F B'' Morse was so livid you'd think she was Catholic or something.)

Currently Reading: The Best of Archie Comics, 80th Anniversary Edition, Volume 1. So it reprints this 1989 story, ``Robo-Teen'', one of the Mighty Archie Art Players (hey, a Fred Allen reference by way of a Johnny Carson reference) spoofs of ... well, in this case, your basic Teen Wolf sort of film. Archie has an accident and becomes a cyborg and at least he's looking good for the football team --- until the opposing team points out there is so something in the rulebook that says a cyborg can't play. Also Martians and rhinos, by the way. So big points to Team Archie, 1989, for nailing that joke.