Grand Rapids Pinball League is starting up again. It's the first major Michigan pinball league to hold events since the pandemic started. This is legal, given the loosening of rules about open crowds. It's maybe even not terrible, since the venue --- the Pyramid Scheme in Grand Rapids --- is able to open nearly its whole front to the open air. (It's a former firehouse.) And since concerts are off, many of the pinball machines were put around in the event space, arranged in a flower-like order so that nobody has to be anywhere near anybody else. I'm not figuring to attend, not before Kent County's daily-new-cases rate (the past week, 11.7 cases per 100,000 people per day) drops by at least a half from where it is now. I understand the desire to Get Back To Normal but, jeez, pretending that things are all right does not make them all right.

The announcement that they were starting up made everyone ask when Lansing Pinball League would start.

bunny_hugger does not like being pushed to make statements of that kind. But absent an announced plan, people might figure they don't need Lansing Pinball League to run events, especially as nothing is going to be sanctioned by the International Flipper Pinball League for the known future.

So, her decision, which I endorse. We won't start before the 1st of July, which is when the current plan is to lift indoor-gathering restrictions anyway, because everyone is just hoping the pandemic will go away in thirty days. But we're also not going to hold events unless the seven-day infection rate around us is low enough. That low we set at 5 cases per 100,000 people per day. Although, to admit how things are changing, when we set that last week that seemed like maybe the best we could realistically hope for. The rate in Ingham County the past seven days, according to CovidActNow.org, was 5.2 cases per 100,000 people per day. With an infection rate of 0.64, or, rapid decline. We haven't been this low since late summer last year, when Michigan State moved to online classes but too late to actually stop students from gathering in East Lansing.

If we still had the mask mandates I'd be feeling really good about this, like we might get down to 1 case per 100,000 per day. Or even the ideal of zero. We had four days in a row of zero cases in June of 2020 (the 15th through the 18th), but that was back when we were trying to stop the pandemic.

Anyway, people seem to have accepted the Lansing Pinball League plan, and I admit it would be really nice to step back in to the bar and play some games. And if the pandemic continues on the trend it's had since mid-April we'll be able to. But I look at the loosening of pandemic restrictions and think of Odysseus's crew, seeing Ithaca on the horizon, figuring this would be a great time to rip open those mysterious bags surely containing treasure, because what could it hurt?

Back to pictures from May; hope you enjoy. 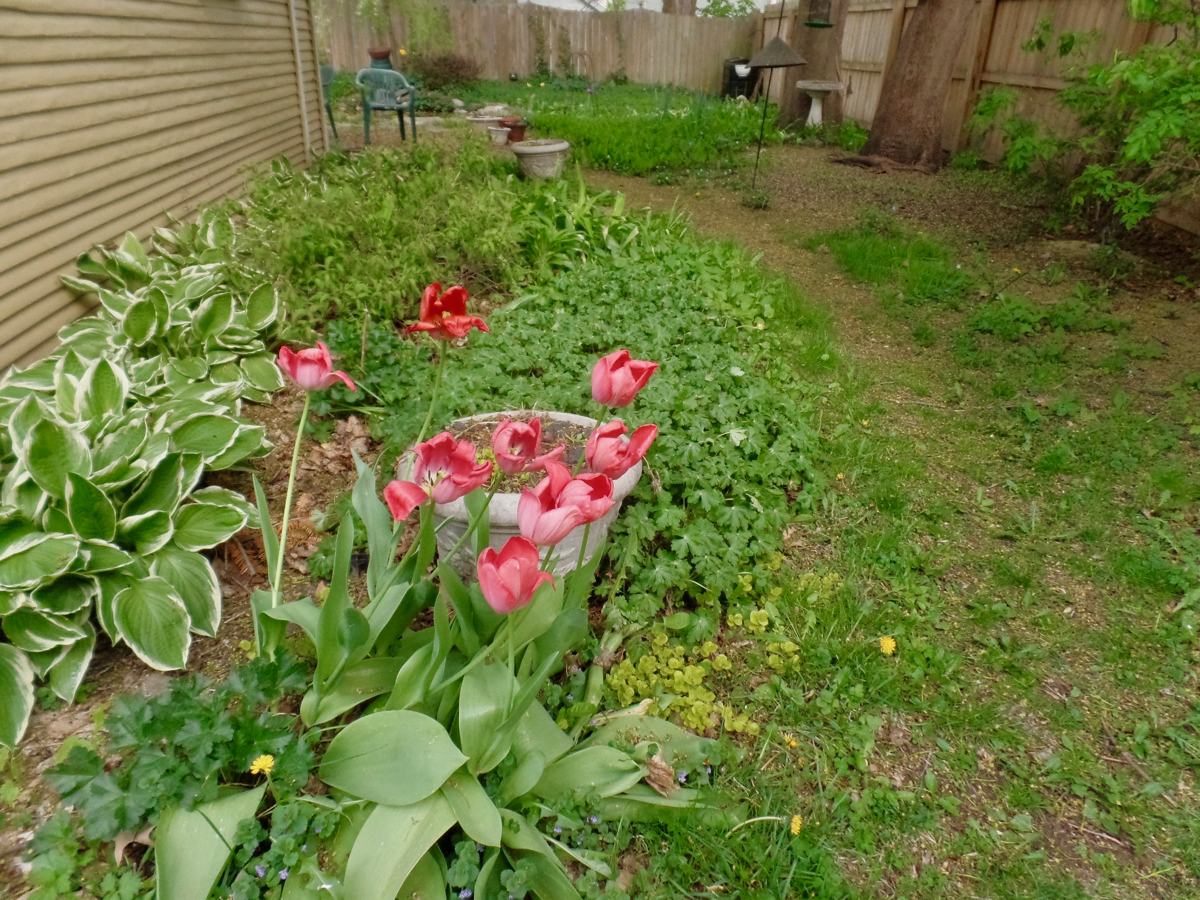 Our tulips hurrying through the part of their life cycles that make them so appealing to us. 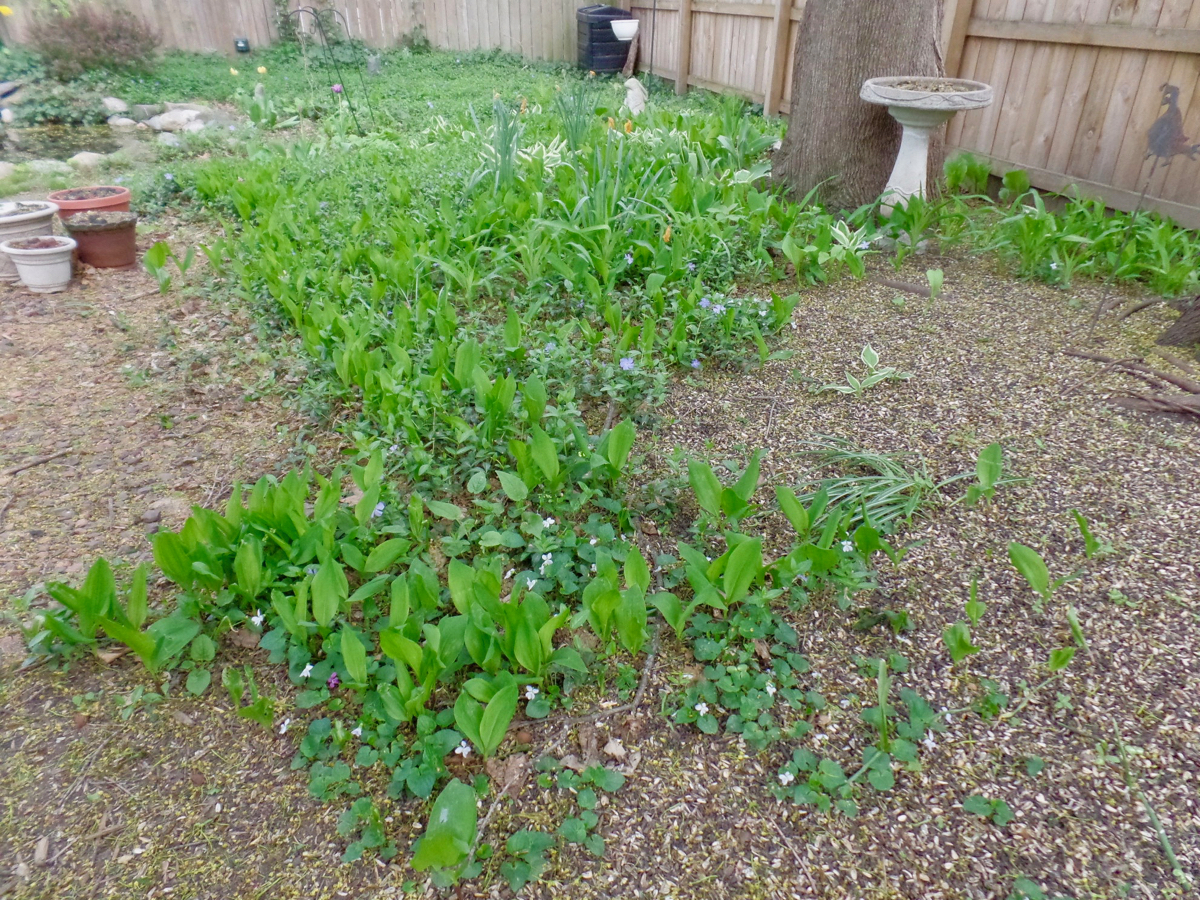 And looking into the backyard. The great dead patch on the right is the shells of spent sunflower seed shells, tossed out by the squirrels. 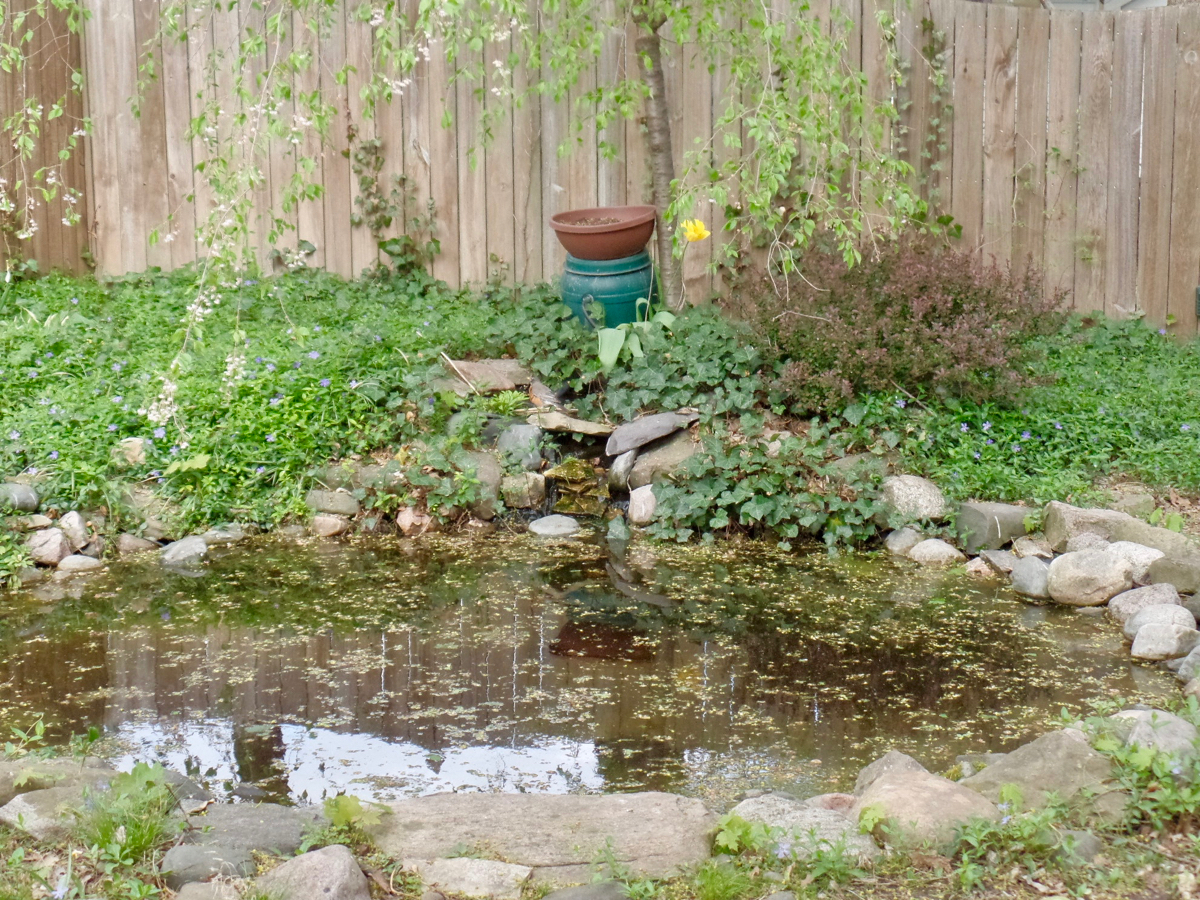 Our pond, and the upper pond, un-netted since we don't have most of the fish out yet. 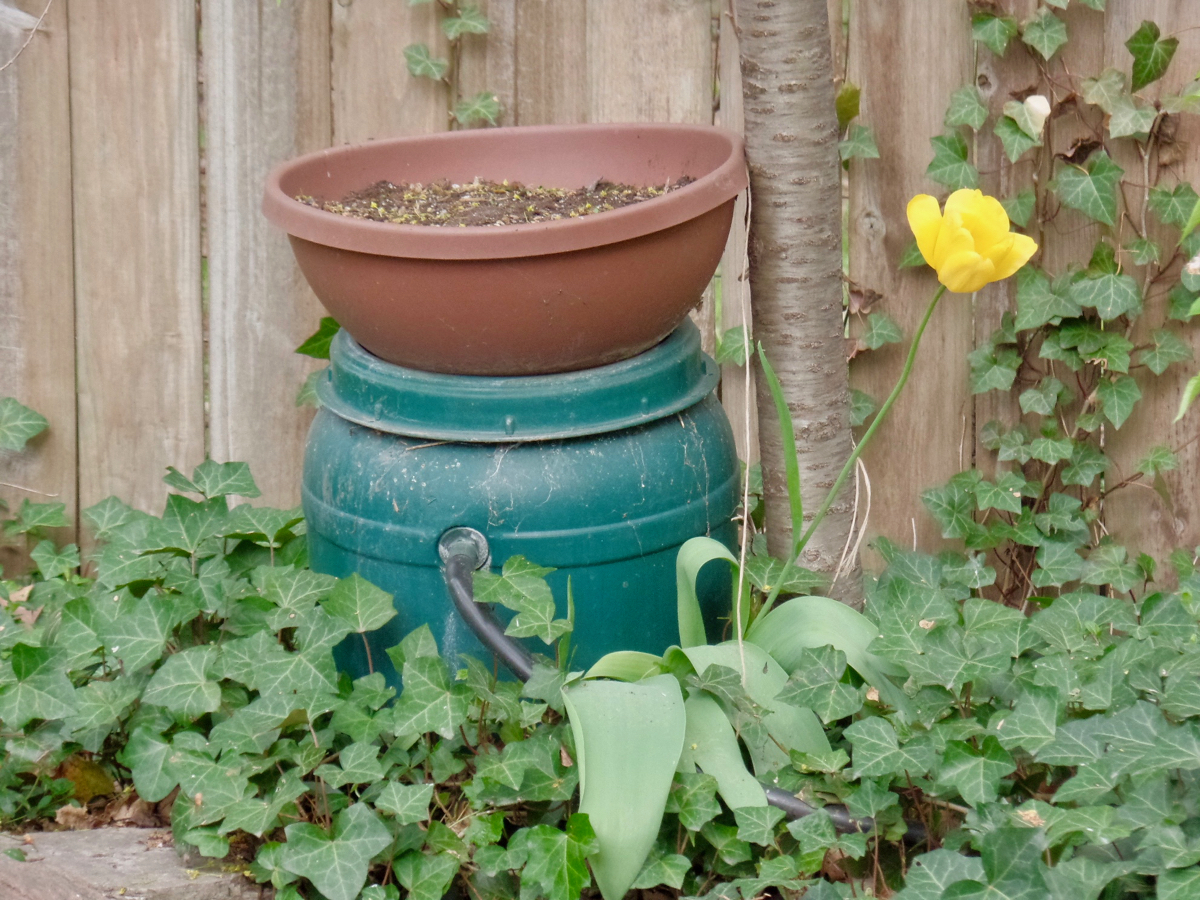 And a lovely flower beside the water-filtration tub. 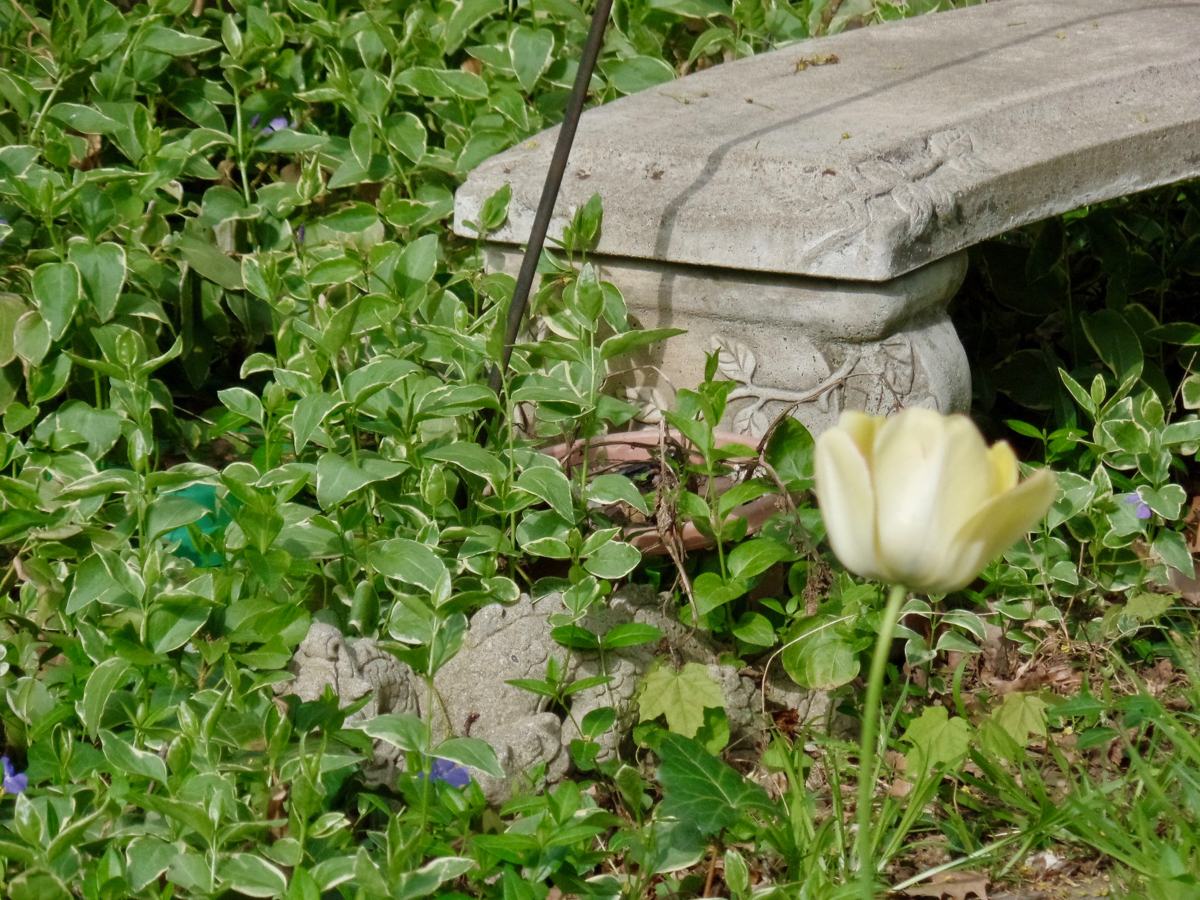 Dragon and bench which mark the spot where past rabbits were buried. 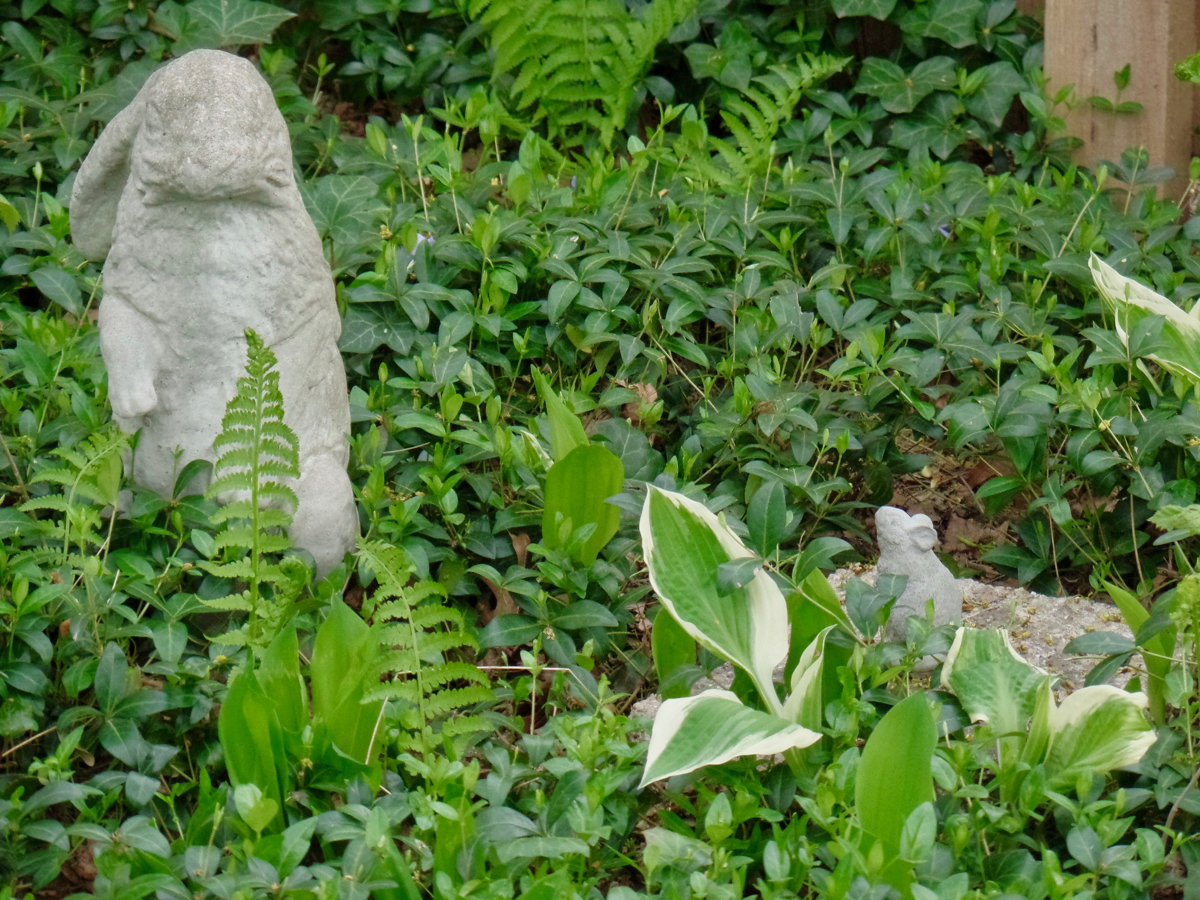 The rabbit sculpture is just there. The mouse sculpture represents where we buried Fezziwig. 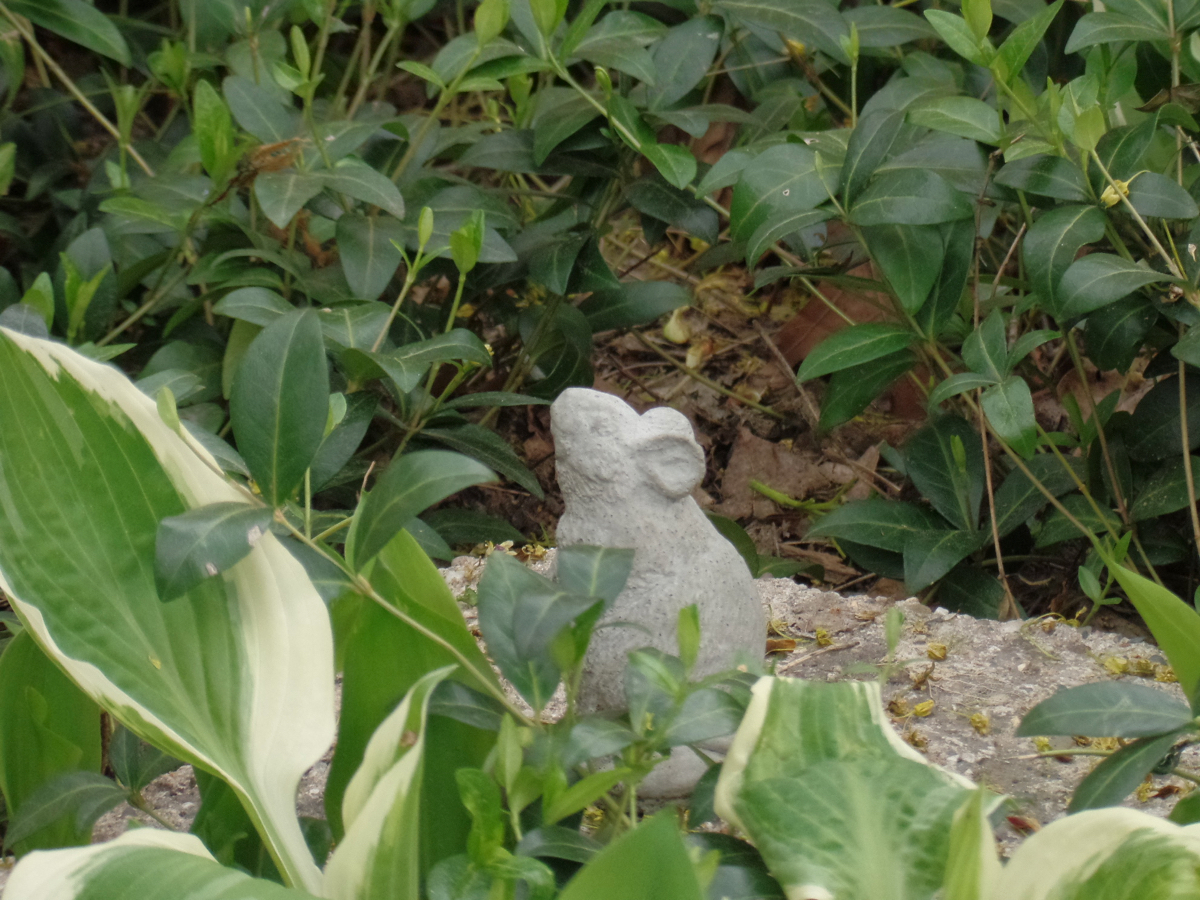 Mouse statue there to mark Fezziwig's location. There's also a large flat stone underneath that, set down so as to keep animals from sniffing around the disturbed dirt and finding his corpse. Since this photo was taken in early May, the myrtle around has grown enough to obscure the statue. 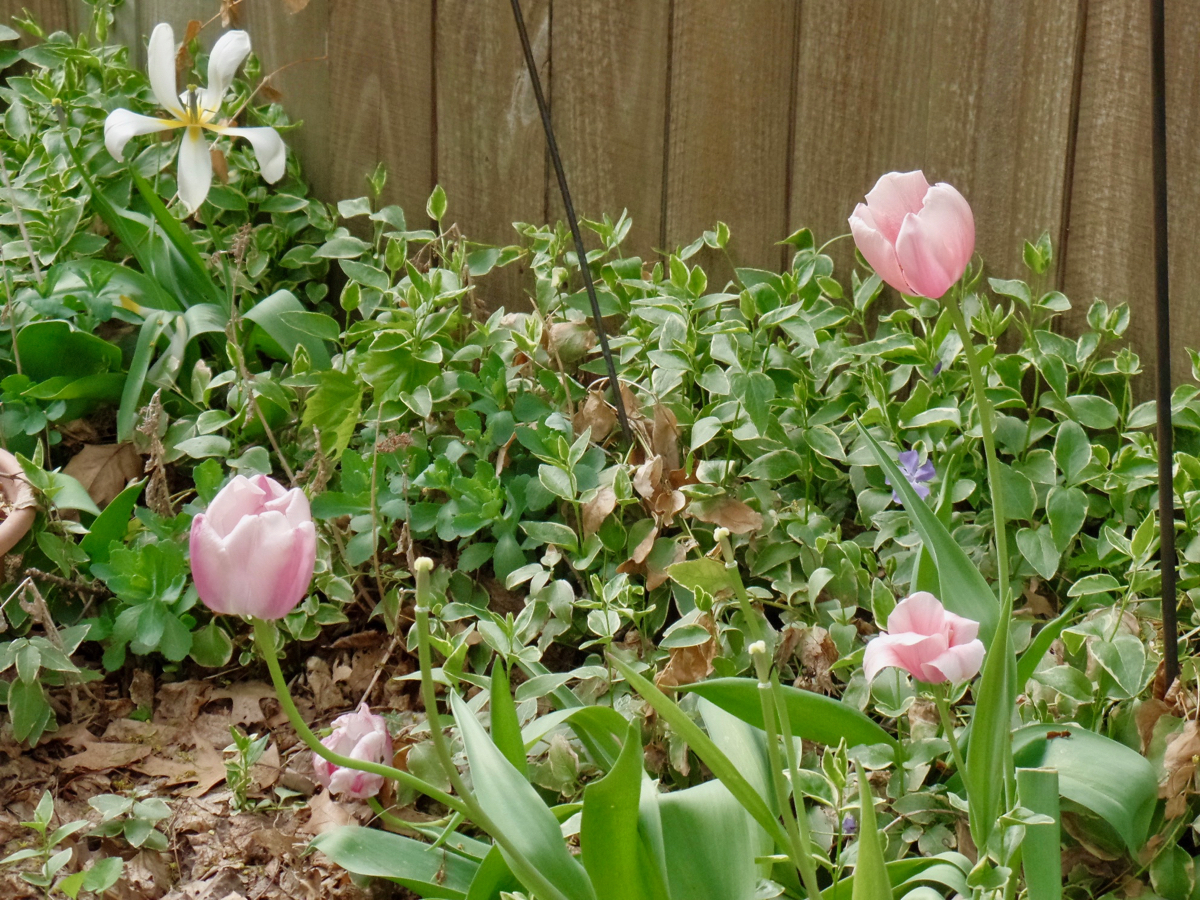 More flowers and the fence behind them.

Trivia: The fifth month in the Ancient Egyptian calendar was Mesir. Source: Source: Mapping Time: The Calendar and its History, EG Richards. </p>