The International Flipper Pinball Association announced it's going to start sanctioning events again. From the 1st of August pinball events can return with as much legitimacy as can be conferred by the kids of the guy who did that one shot that impressed the New York City Council back in 1976. There won't be state champions this calendar year, nor a national championship. Nor women's state championships, so

bunny_hugger's debut running that for Michigan is pushed back another year at least. Leagues are encouraged to resume where they left off, though, as best as that can be done. So that's our plan, then. Resume Lansing Pinball League Season 14 in August. I imagine other pinball venues are going to start up too. (Grand Rapids's unsanctioned season won't count, but it's easy enough for them to start a legit one in August.)

I guess I'm glad to see this, although I'd be happier if states waited until enough of the population were vaccinated. And we were confident that the drop in infections was holding. It's low, now --- Ingham County's been around ten cases a day for over a week now --- but we were at that rate all last summer and then went to ten times that in September. I suppose it's more likely that by the start of August at least 70% of the adult population will be vaccinated but I'd like to see hatched chickens. Yes, being closed is hard on places, but opening, and then having to close again, is harder and kills more people.

Here's some more pictures from me prowling around that bridge site. Sorry, this is what you'll have to put up with until I feel comfortable photographing pinball events again. 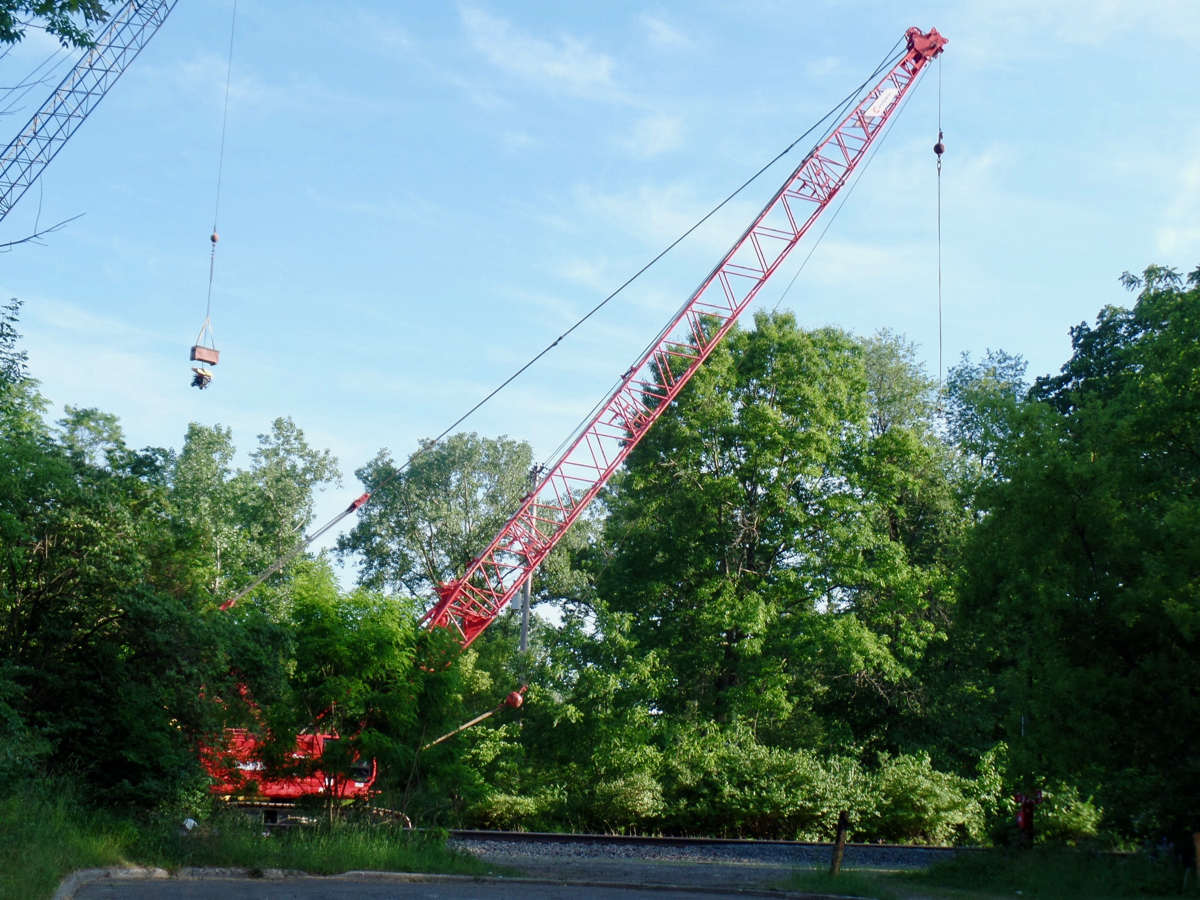 Big ol' crane set up beside the railroad tracks at the construction site. This is the end of Other Clemens Road, the south-of-the-Interstate extension of the block next over from us. 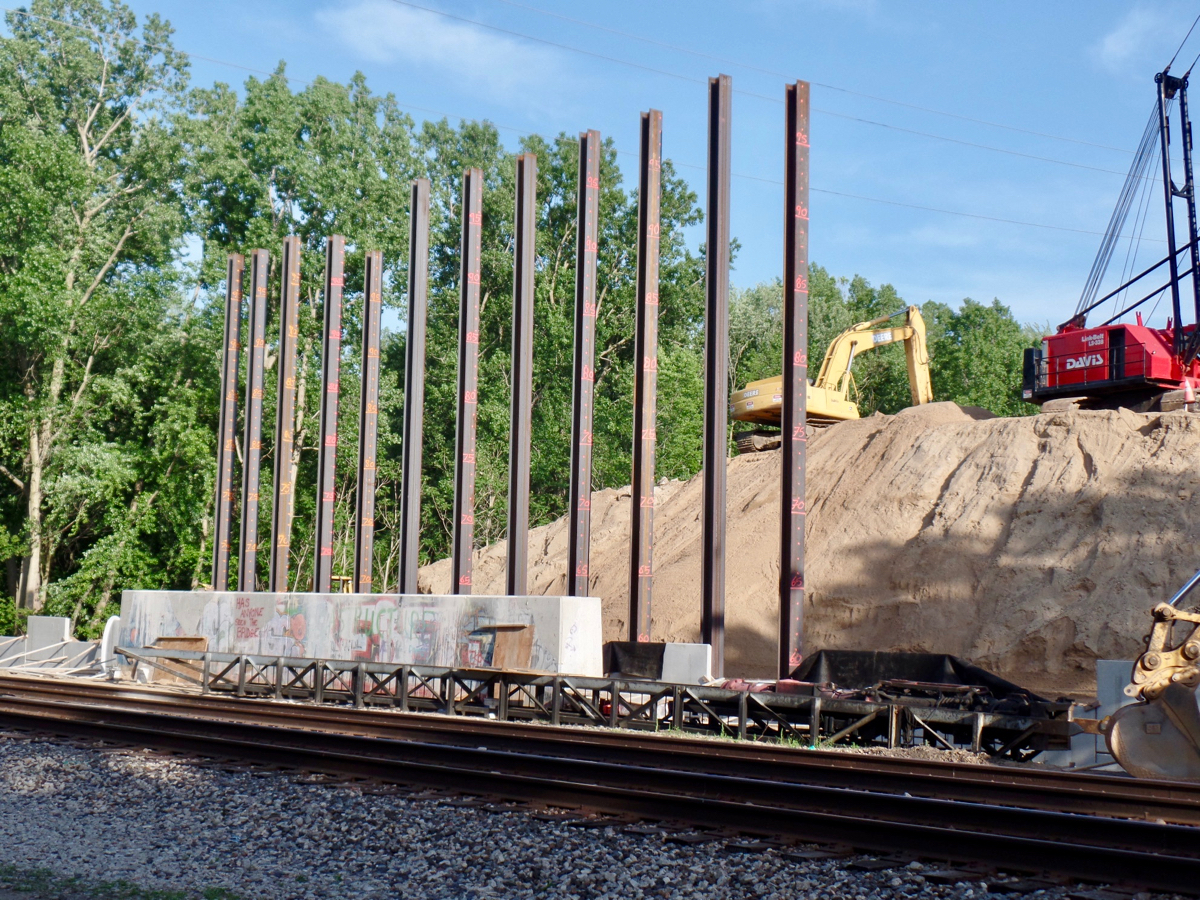 And there's the new pillars as seen yesterday. There's height markings on them. I assume they're going to be trimmed to some uniform height and also not extend above the roadbed as otherwise there'll be traffic issues. 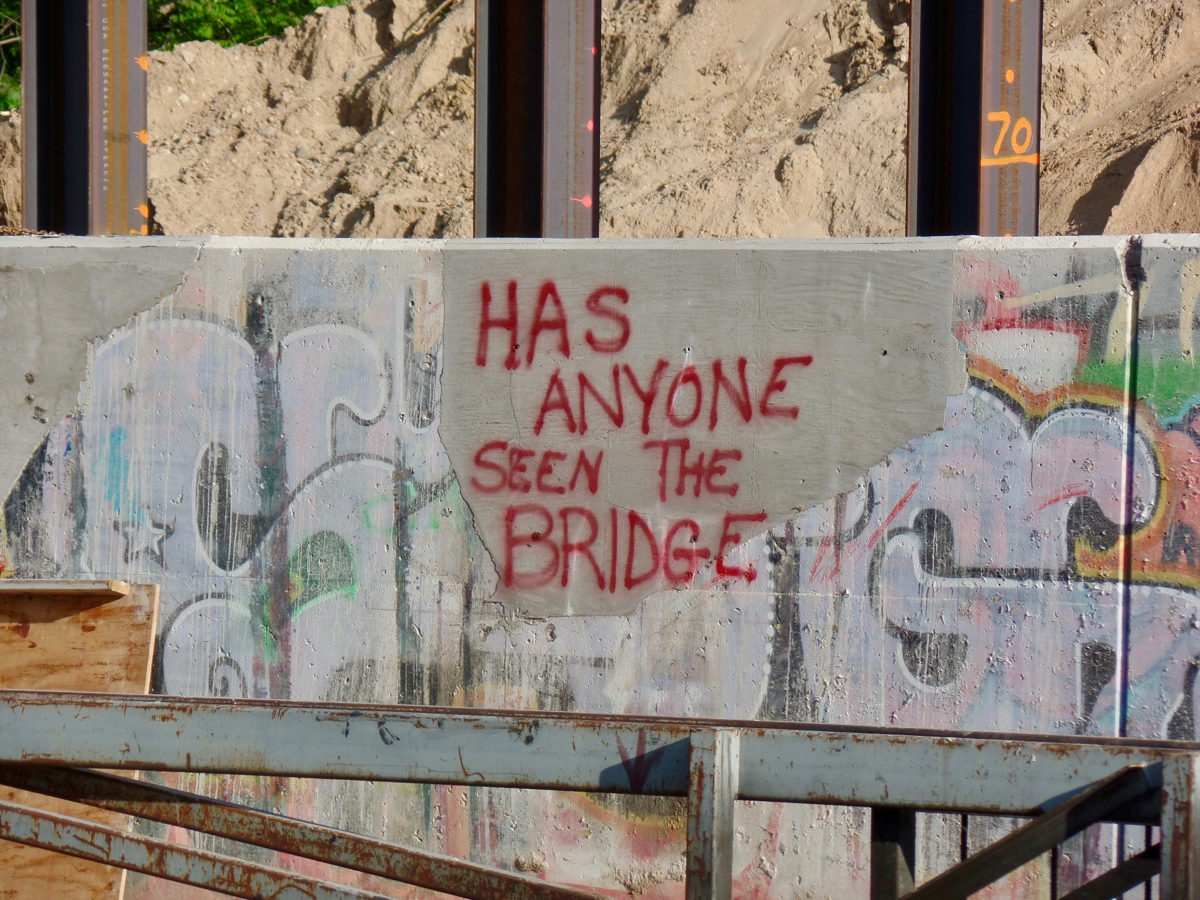 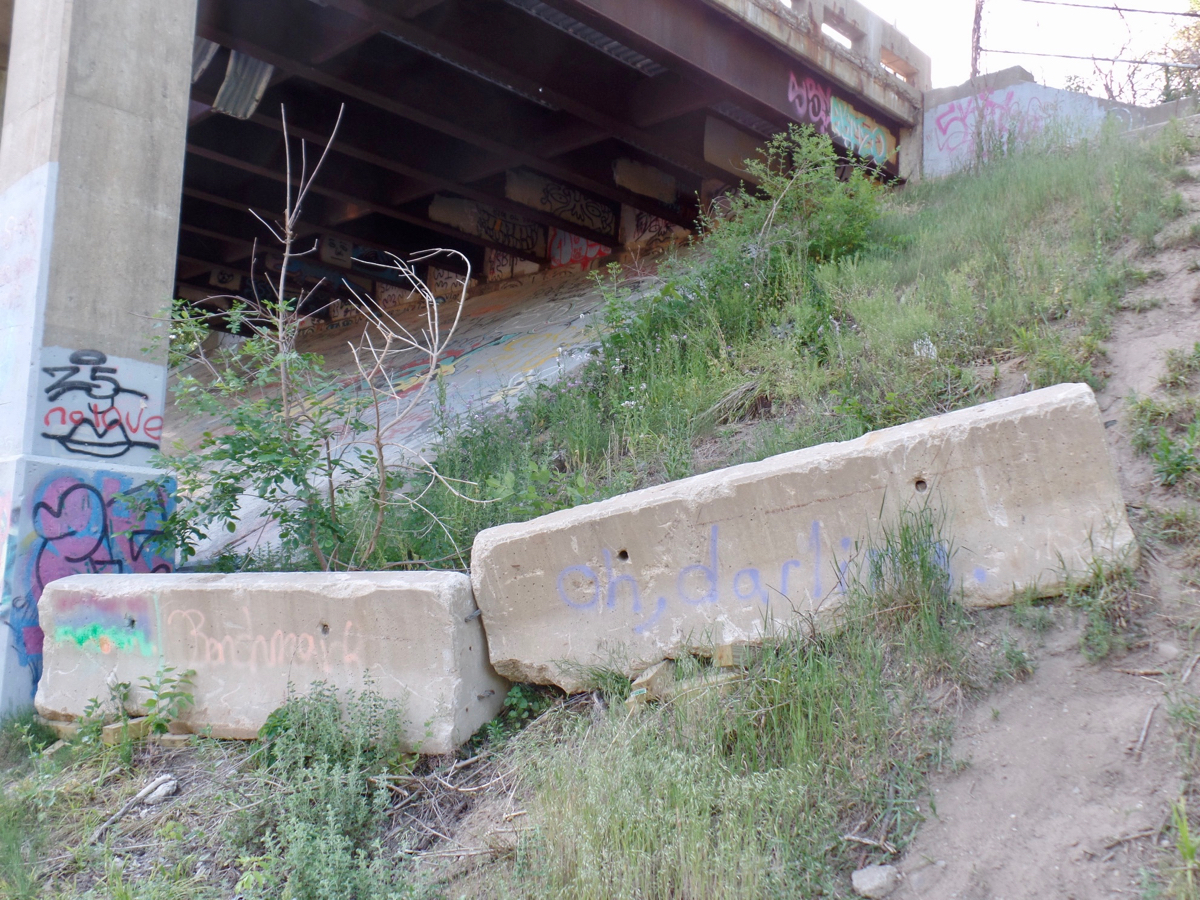 ``Oh, darling'' written out on that Jersey barrier. I assume it's on the hillside so that people who go falling down the hill get stopped before they roll onto the train tracks. 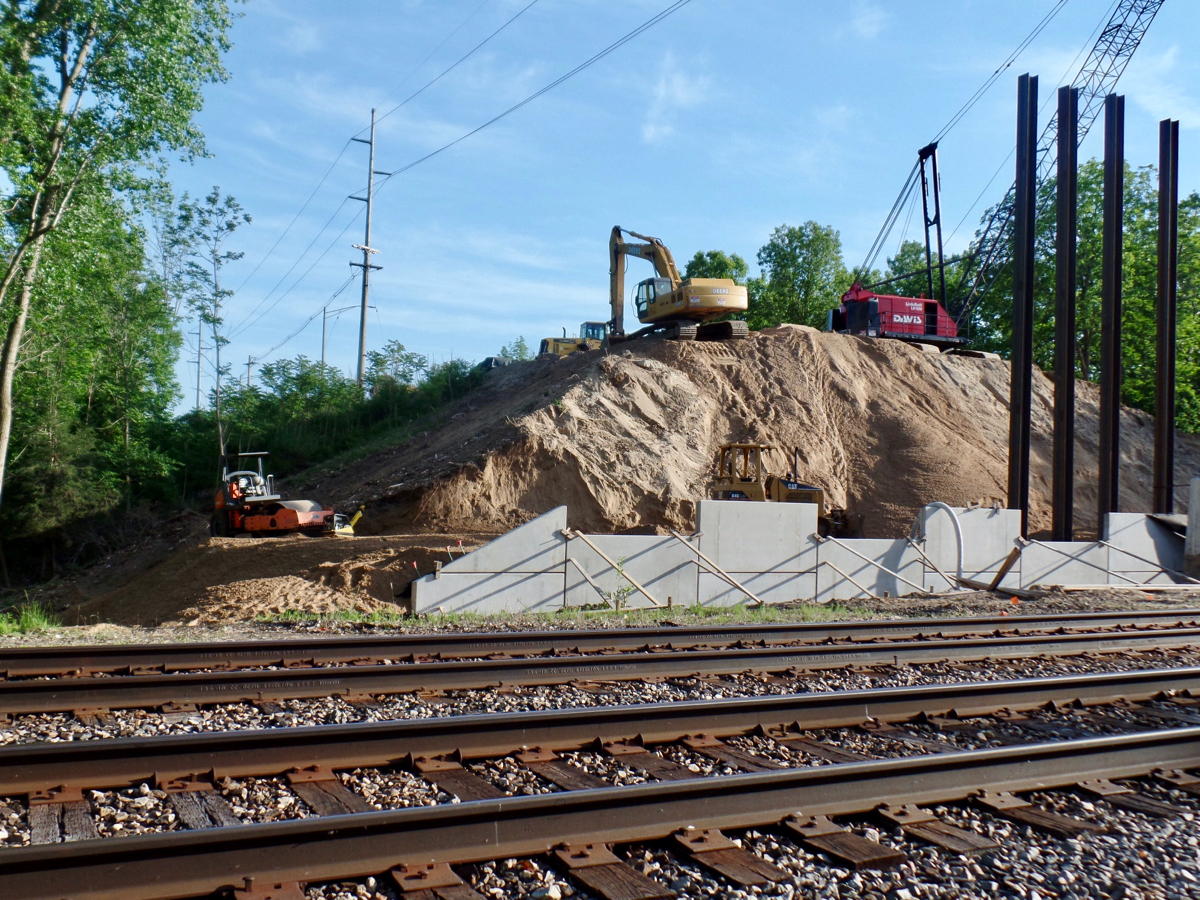 Speaking of train tracks: here they are, and there's the vehicles on the other side. It does look like it shouldn't be hard to walk up the side, as long as (like now) there's not crews at work. 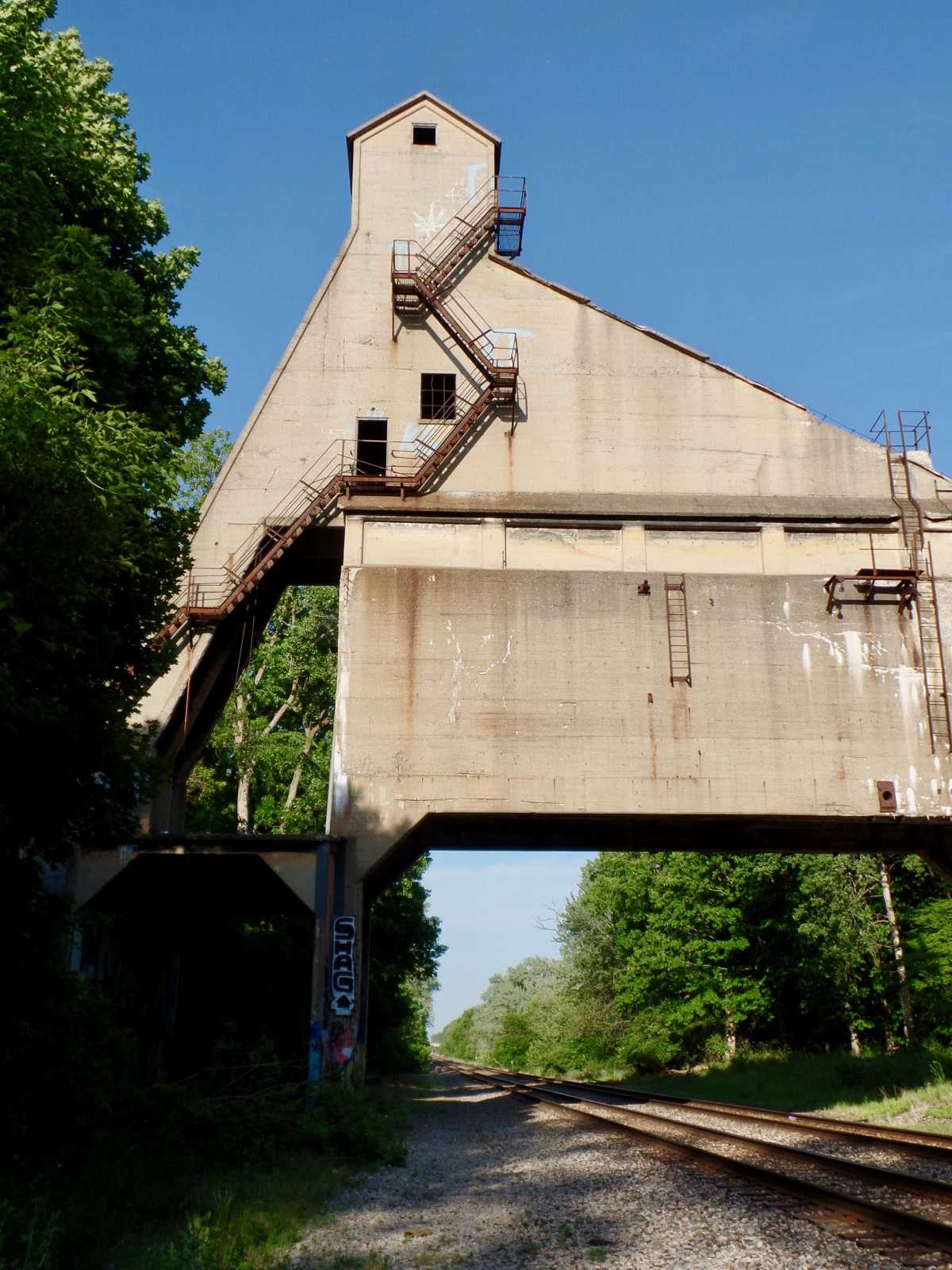 Sneaking up on the Grand Trunk Western Coal Tower. 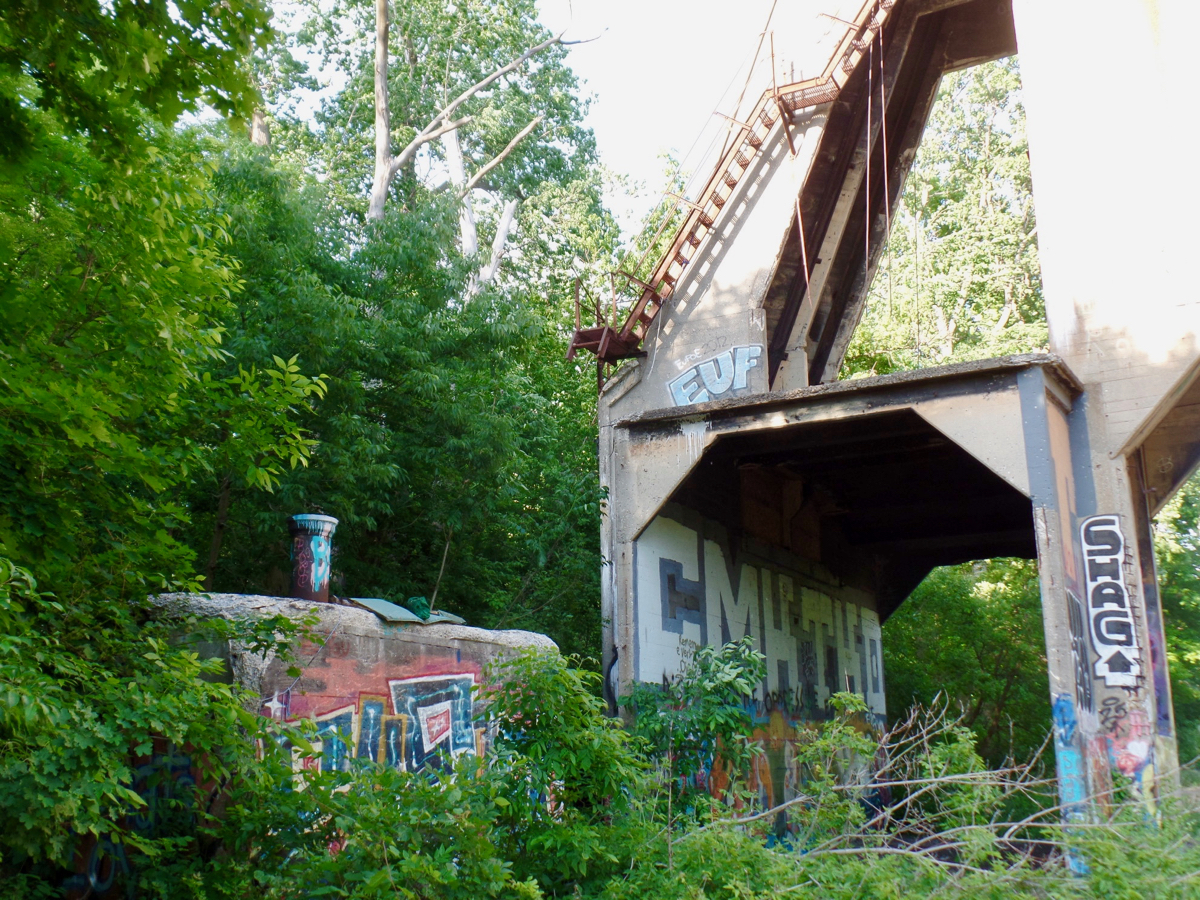 Side of the Coal Tower, because I wondered how they got the coal into it back in the day. This doesn't answer the question at all. 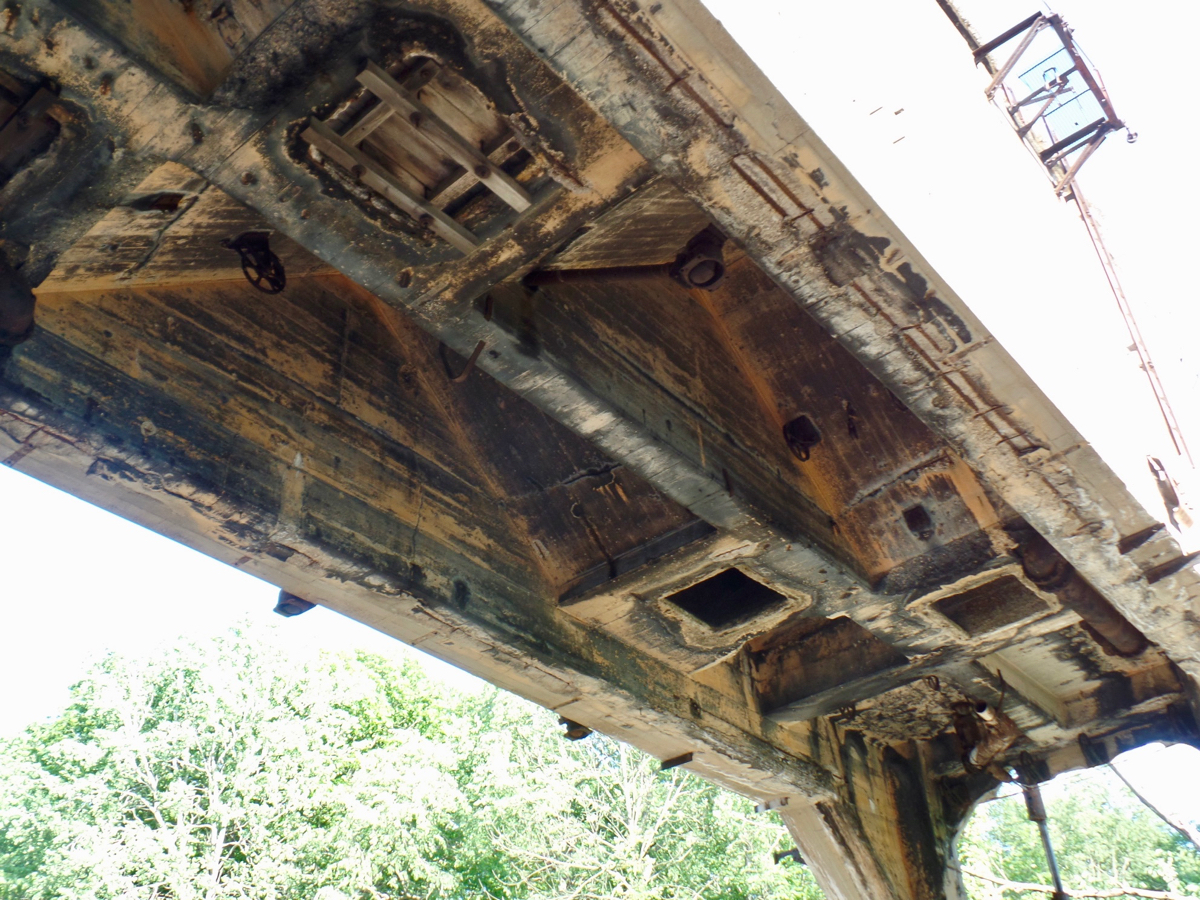 Looking up the base of the Coal Tower to see the gritty machinery inside. Also, you can see how hard my camera worked to make the underside visible by how completely washed out the sky and trees are. My album cover for this set of pictures.

Trivia: An 1868 baseball game in Buchanan, Michigan, to settle the championship of Berrien County (on Lake Michigan, on the southern border of the state), was played on ``an old potato field, full of stumps and stones and about as uneven as ground could be''. Source: Level Playing Fields: how the Groundskeeping Murphy Brothers Shaped Baseball, Peter Morris.