bunny_hugger's declaration of Don't You Forget About me being the song of summer 2020 and by extension the pandemic shutdown.

I guess that I'm glad to have them back to normal, especially as it's Conan's last weeks in his evening chat show form. I hope that they're right that it's safe to have large crowds of people who check a box claiming they were vaccinated grouped indoors. Let's suppose for just now that it is.

Doing their shows without an audience or any but a skeletal crew, though ... it's been good entertainment, really. It's forced them to be intimate, even quiet. Big and bombastic is exciting and we're always told we should be excited by things. We don't get to appreciate the small and the quiet enough. In the very ill wind of society's failure to manage the pandemic, we were forced into quiet places a lot. Without our days stirred up by going places and doing things we settled where we could not avoid hearing our own thoughts. I suppose this is some of what was so excruciating about it; there's only so much of ourselves we can take and be healthy.

But we need some of it still and I hope in the after-times Colbert recognizes and embraces some of that silence that last night he called his enemy.

So what're we up to in June 2021 pictures? Could it somehow be this week when I went to Preuss for the water pump? How? 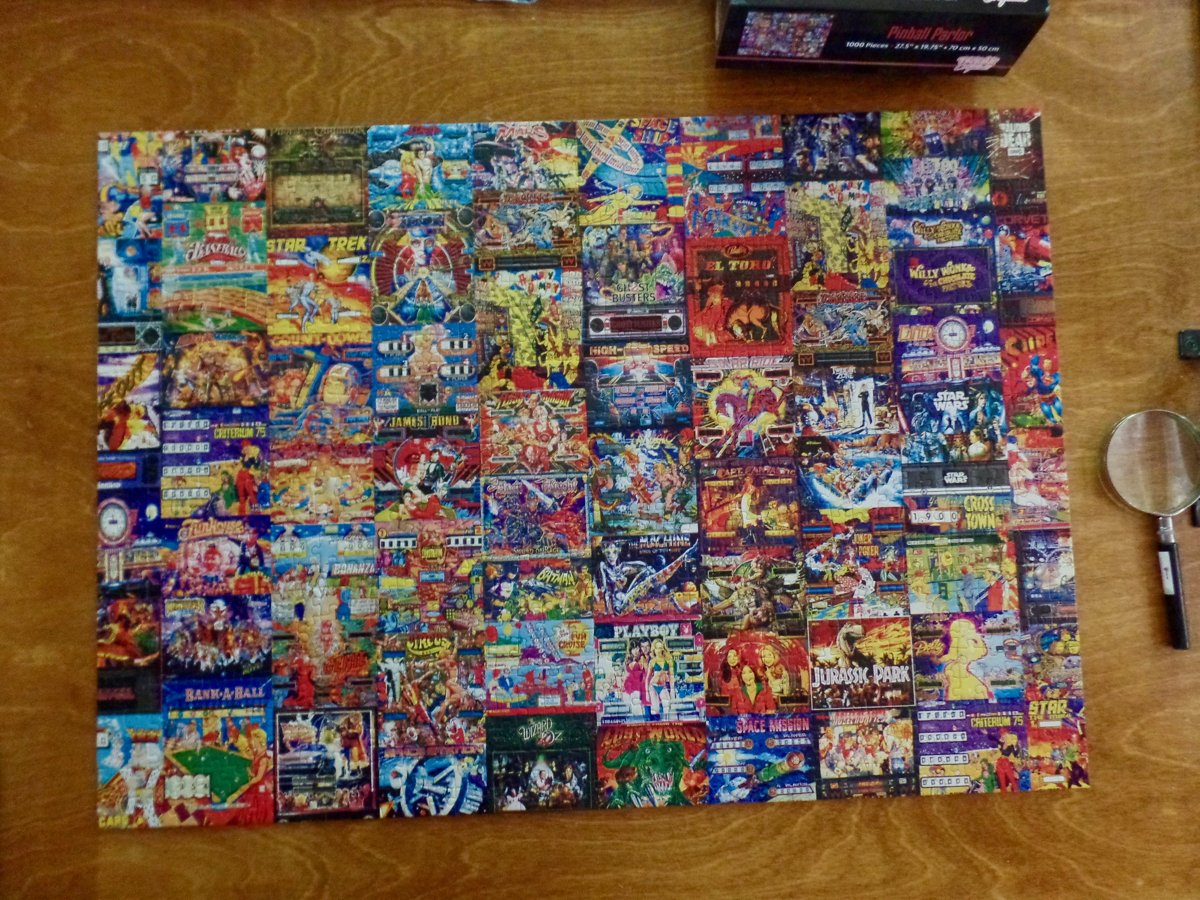 bunny_hugger wondered if there were a pinball jigsaw puzzle and she found this one, a collage of many pinball backglasses. It didn't take long to do, with the biggest delays caused by not having a decent picture of what it was supposed to look like, and with some half-dozen or so backglasses being repeated. And not ones on the edges of the puzzle like you'd expect, either. Anyway we're sure this puzzle, featuring art from many pinball manufacturers spanning a half-century --- and including titles Star Wars, Jurassic Park, Back to the Future, Batman, and James Bond --- was possible through a heroic feat of licensing agreements. Just think what kinds of work made it possible to use (in the lower-right corner) the Star Trek: The Mirror Universe backglass that one guy made to re-theme his 1979 Bally Star Trek. 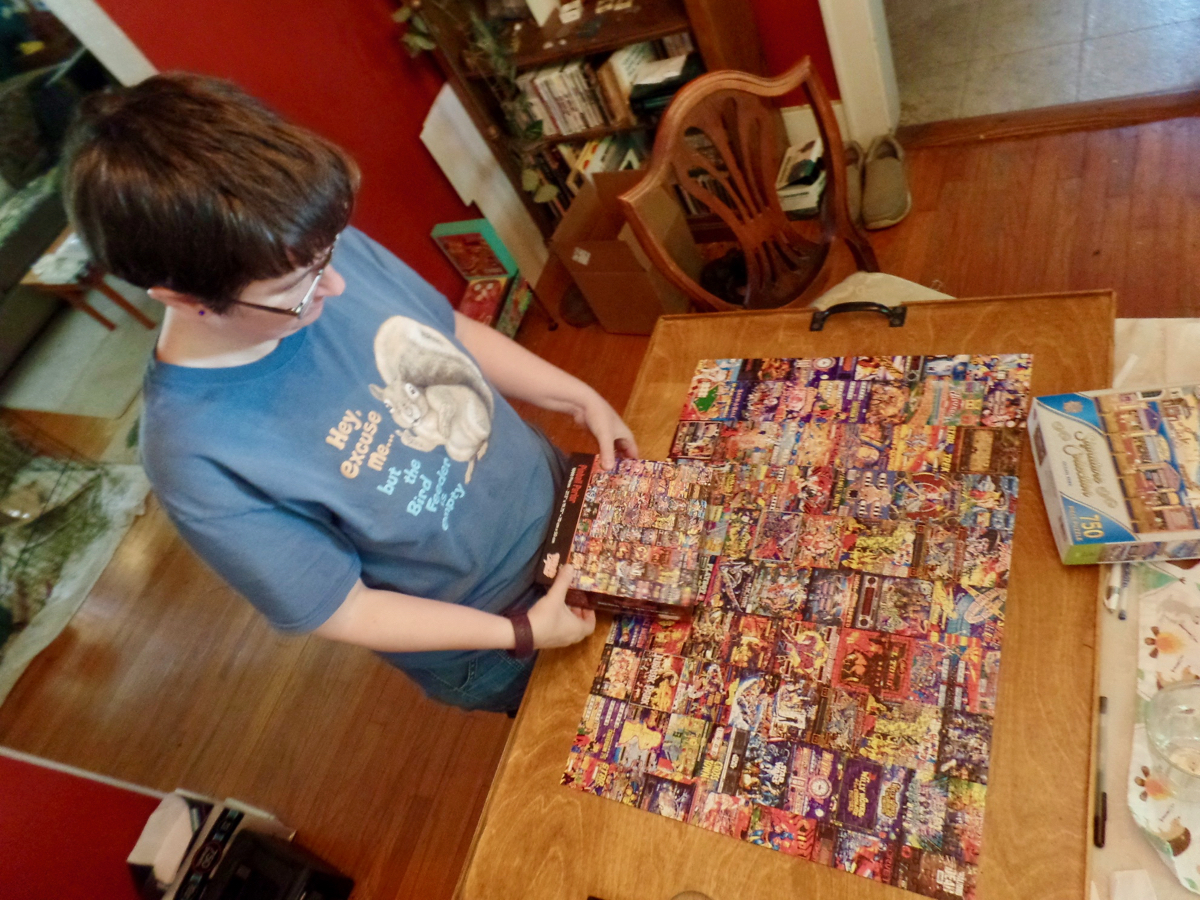 bunny_hugger compares the completed puzzle to the box photograph. That photograph's tiny and incomplete but the best guide she had to the puzzle. 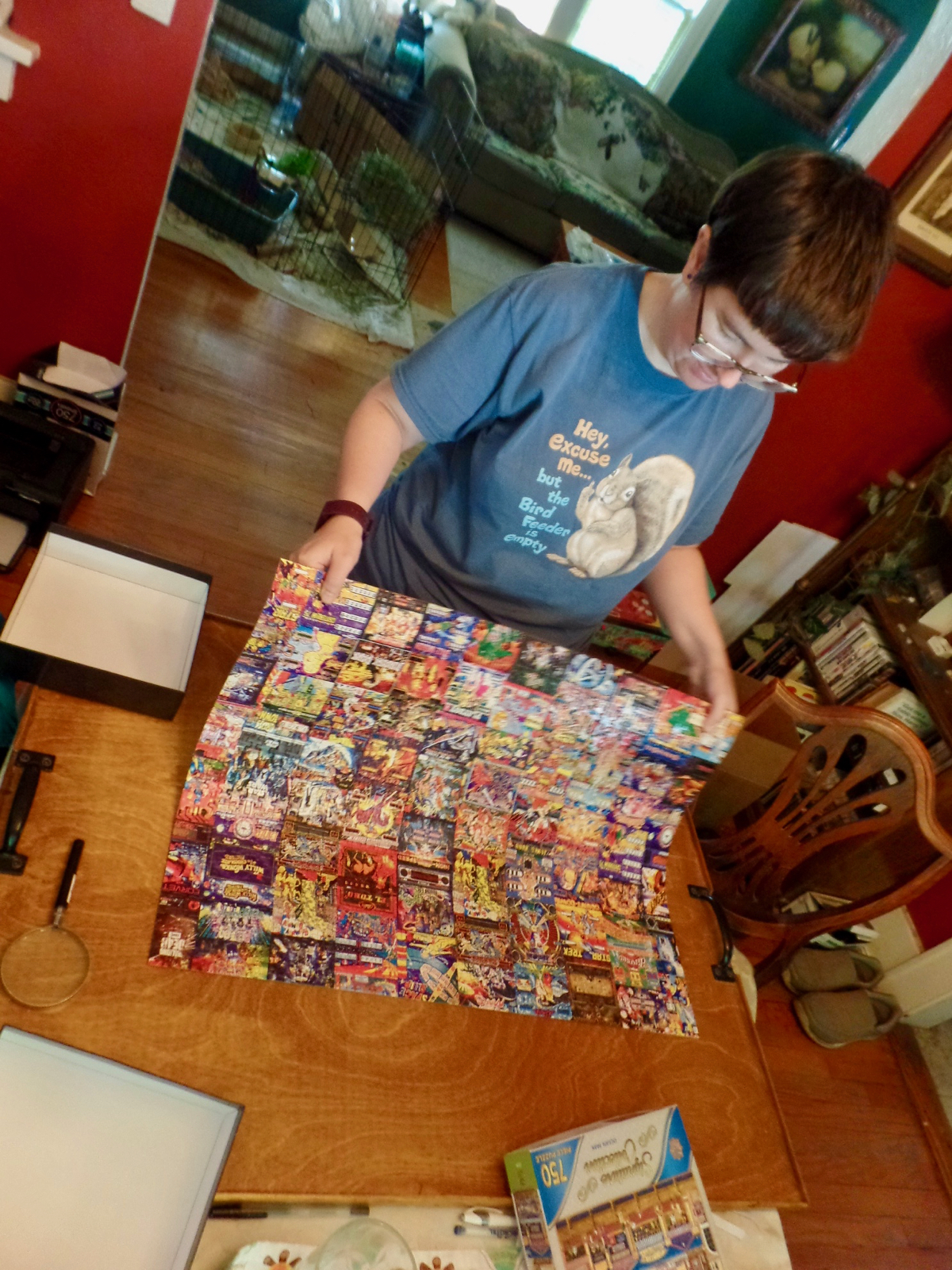 The ceremonial lifting of the puzzle, to see how well it hangs together. 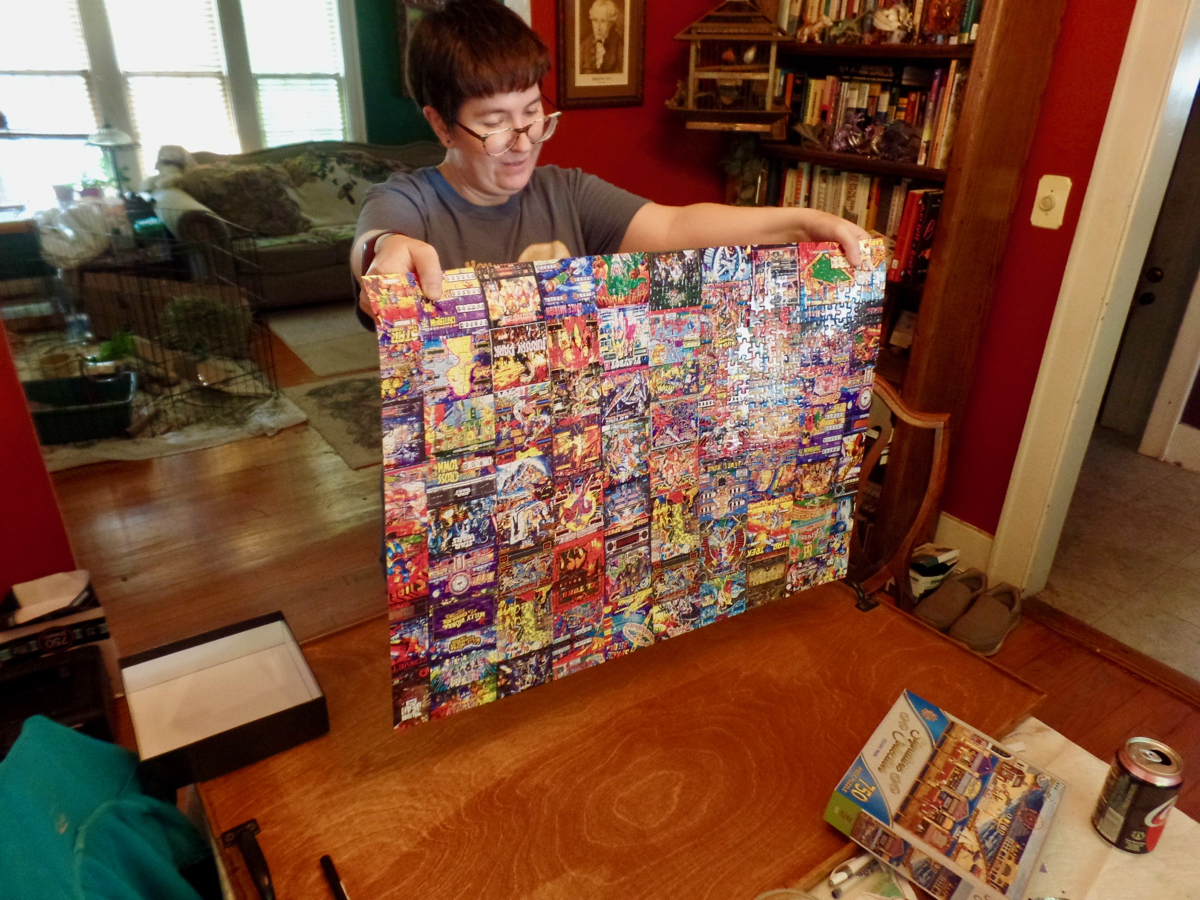 It hangs great! She was even able to set the puzzle back down and only one piece was a little out of line. Didn't even fall out or anything. Really good-fitting puzzle. 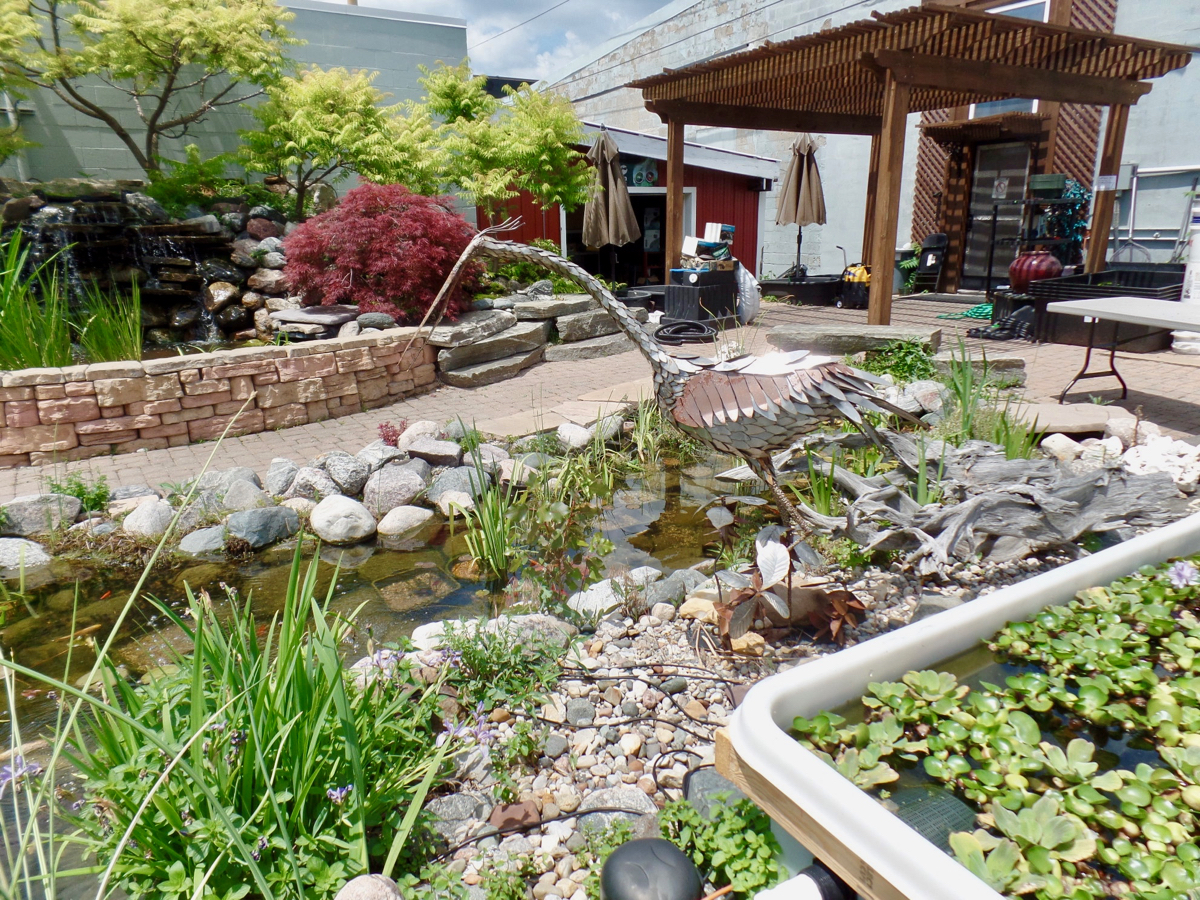 The outdoor-pond area of Preuss Pets, with a bunch of water plants and sculptures and koi pond and all that. 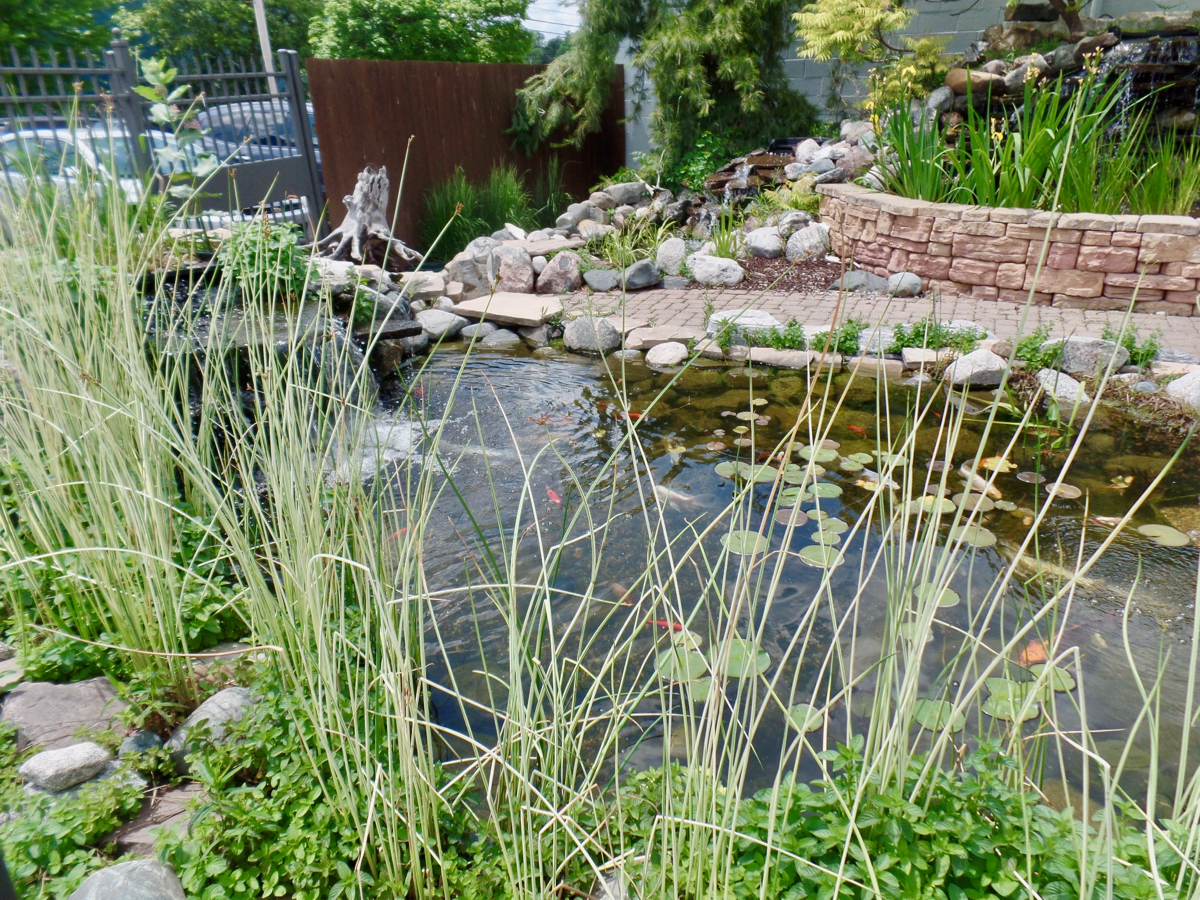 Looking at one of the waterfalls and the koi who benefit from its water-stirring energies. You can see the parking lot past the fence line. 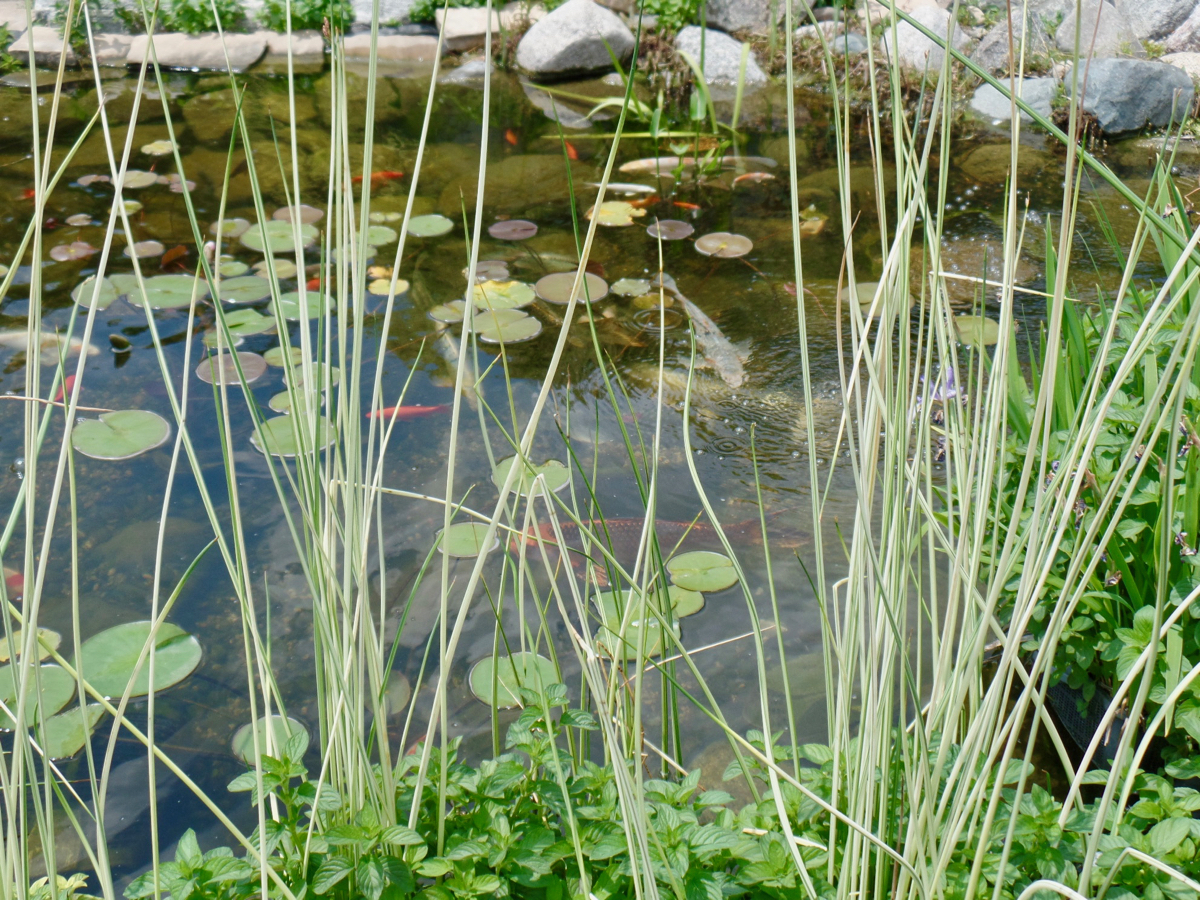 More of the koi; they have some big ones there. 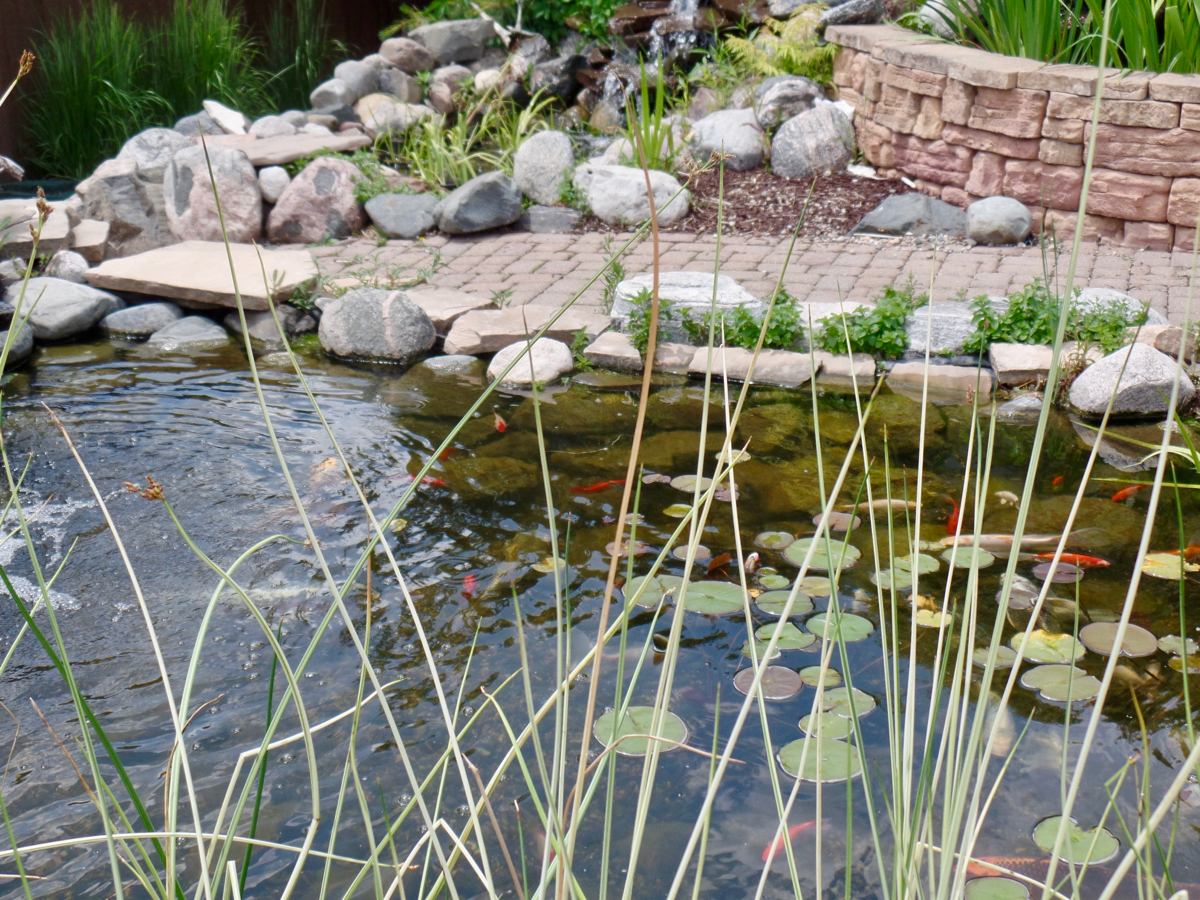 I don't know if this connects to the indoor river that the pet shop has. I'd imagine it would, so all the koi have a chance at being fed by customers, but I also don't know how they'd arrange that water flow. Also I'm not sure how the water is deep enough for the koi to be safe from winter and raccoons both, but will trust that the pet store knows its business; they're really big on fish.

Trivia: Acrylic paints bond to steel so well they can be applied before the steel is stamped into component shapes. Source: Molecules at an Exhibition: The Science of Everyday Life, John Emsley.

Currently Reading: Three Bags Full: A Sheep Detective Story, Leonie Swann. Novel about a flock of sheep trying to solve the murder of their shepherd.

bunny_hugger was all ready to sell this back to the bookstore when I yoinked it out of the to-be-sold box since I figured when else am I ever going to read a book like that? Also, hey, me reading non-comic-book fiction for once in a couple years, how about that?