Ingham County's seven-day average infection rate dropped, according to CovidActNow.org, to 1.0 per 100,000 persons per day today. That, combined with our infection rate being a low 0.58 and the positive-test-rate being a cozy 1.6%, put us in the green, low-risk, category. We've been there before --- we entered that range the 19th of June, 2020, and stayed there a week until some yahoo opened Harper's Bar in East Lansing --- but ... gosh.

We're not the only low-risk county in the lower peninsula. Or the largest: Washtenaw County, containing Ann Arbor and Detroit suburbs, is also at 1.0 infections per 100,000 per day. They've been there before, recently, and fluttered back up. They also have (per CovidActNow) 57.4% of the population with at least one dose.

Still ... the trends for infection levels are all really good. Muskegon County, housing Michigan's adventure, is at 2.6. Erie County, Ohio, with Cedar Point, is at 1.3. Warren County, Ohio, with Kings Island, is at 2.2. Erie County, Pennsylvania, with Waldameer, is at 1.6. White County, Indiana, with Indiana Beach is at a per-capita horrible 17.2, which must be in part an artifact of small population; that's a seven-day average of 4.1 cases in their 24,000-person county.

Figures are all similar for the places with pinball; Kalamazoo, Kent, Newaygo, Oakland, and Macomb County (of Pinball At The Zoo, Grand Rapids Pinball League, Fremont, Marvin's, and Chesterfield) are all at 2.4 or lower. The second half of the year might fill with life after all.

So here's a bit more from walking around home. 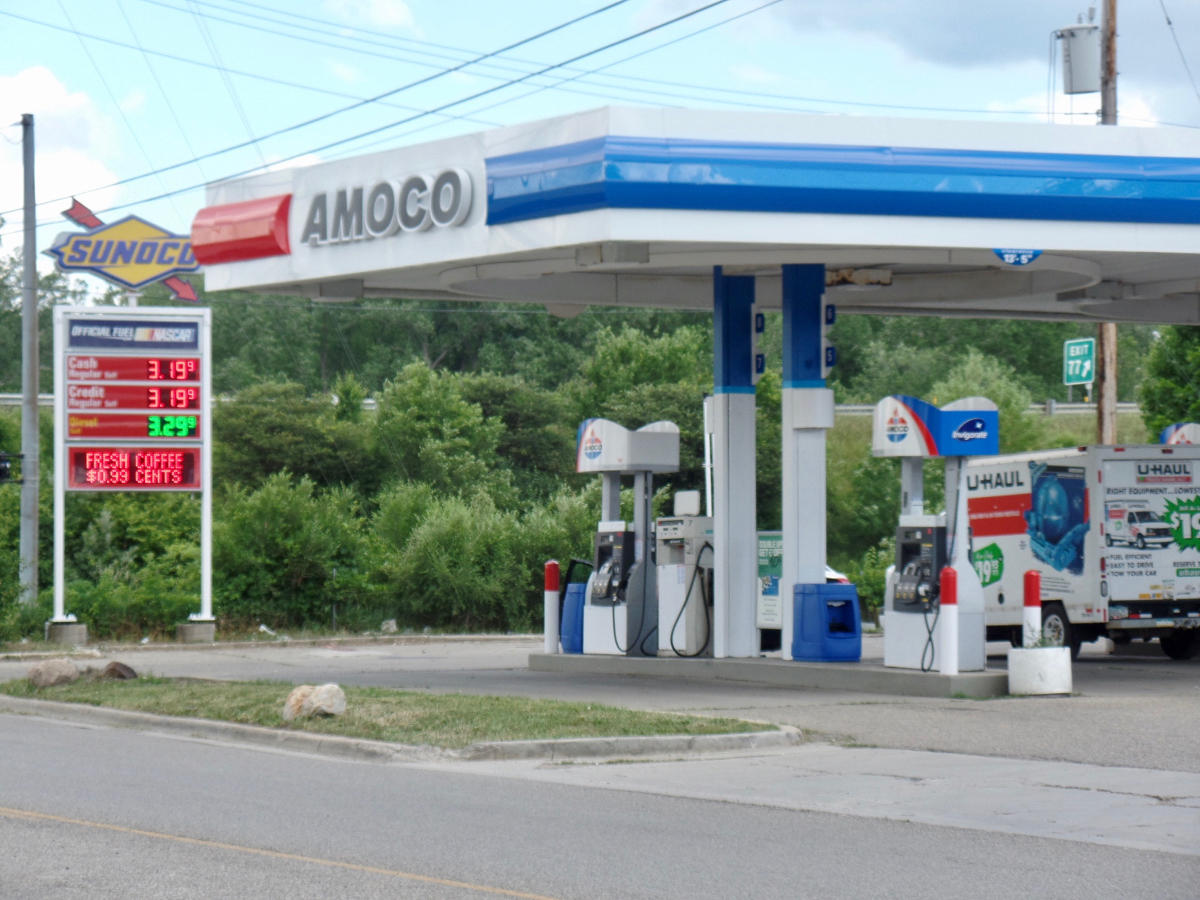 So the always-sketchy gas station at the end of the block is undergoing another molting. At some point the place, which has been a Clark and a Citgo and a Sunoco in my time here is now turning into an Amoco. 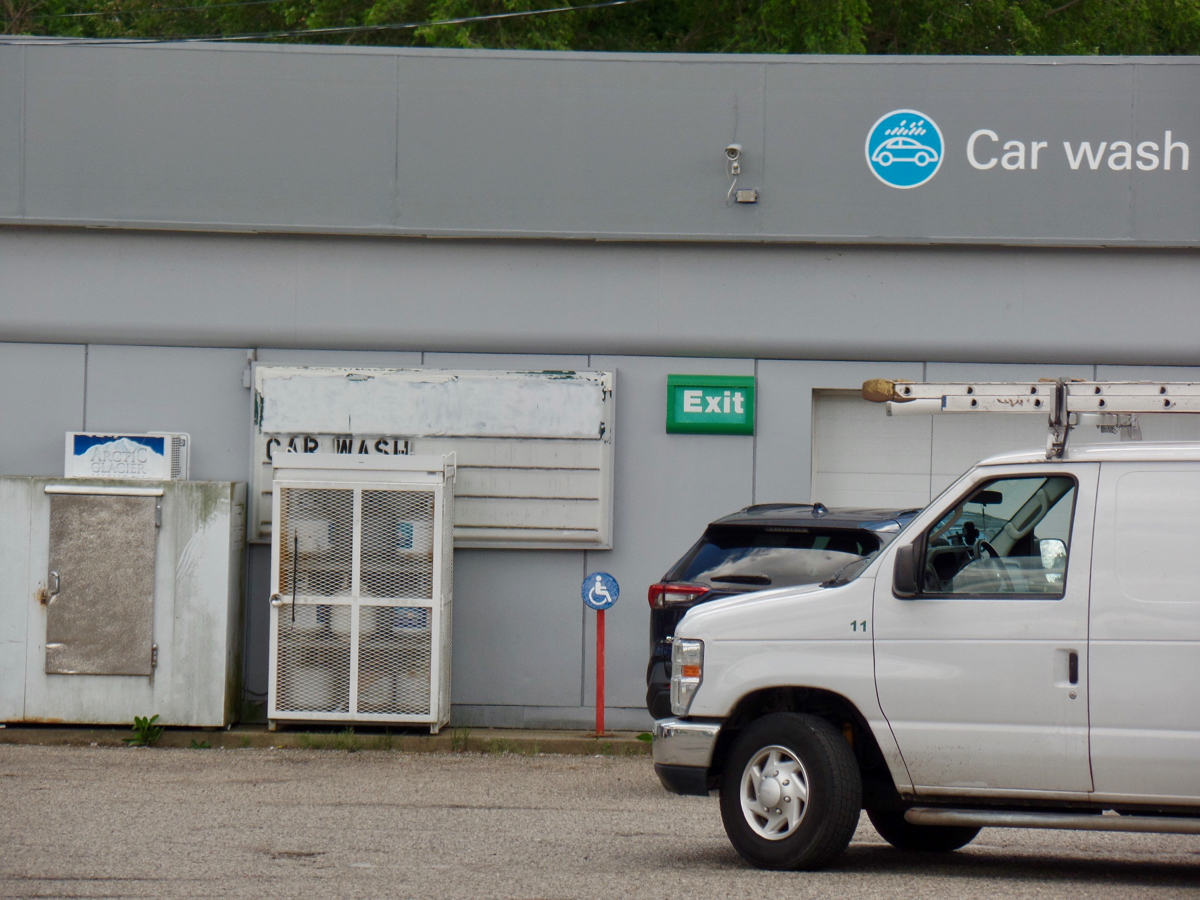 Despite yet another renovation they've kept the very sketchy old Spartan Car Wash sign, even as they try to de-emphasize it. That sign must have the same deal that the 700 Club has with Freeform TV that they can't get rid of it. 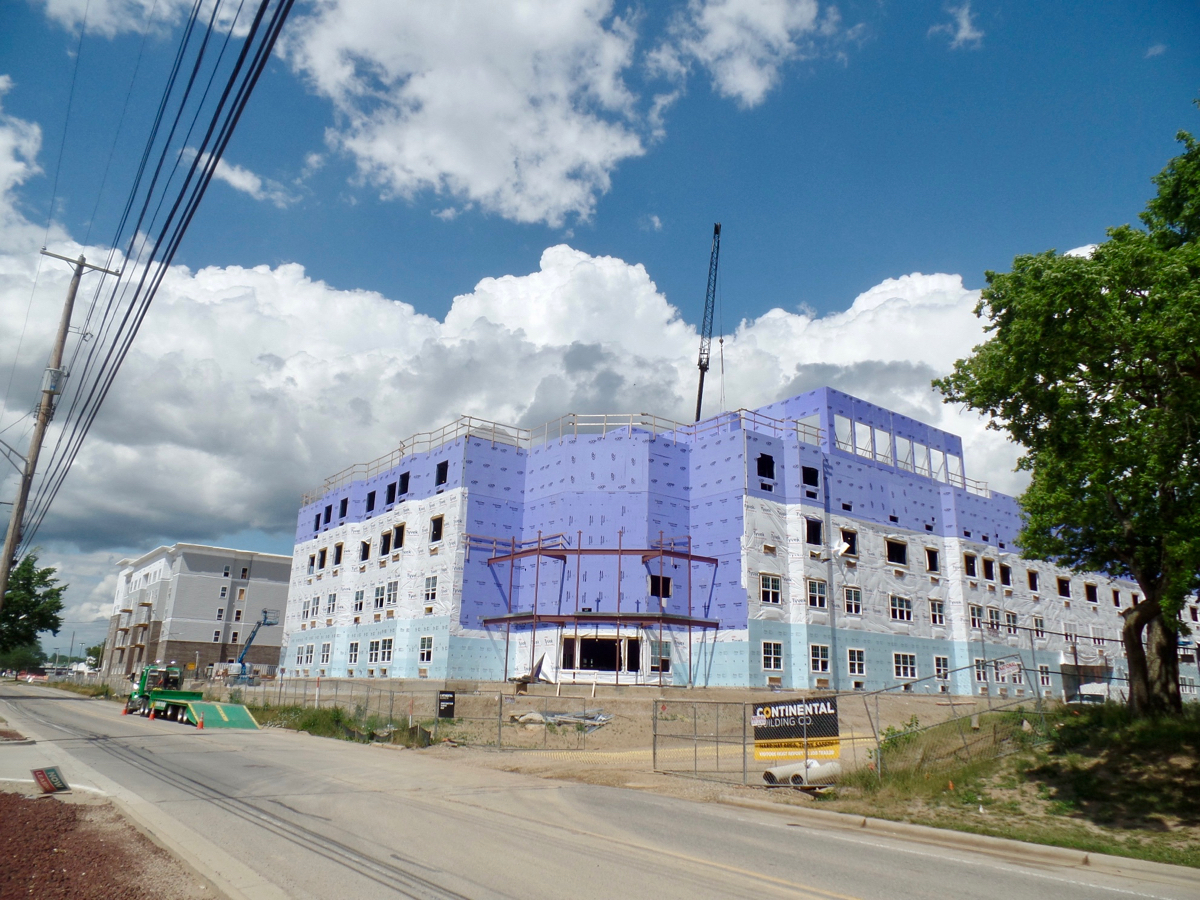 One of several new apartment buildings they're building on a former golf course (and car dealerships) just south of Frandor shopping center. 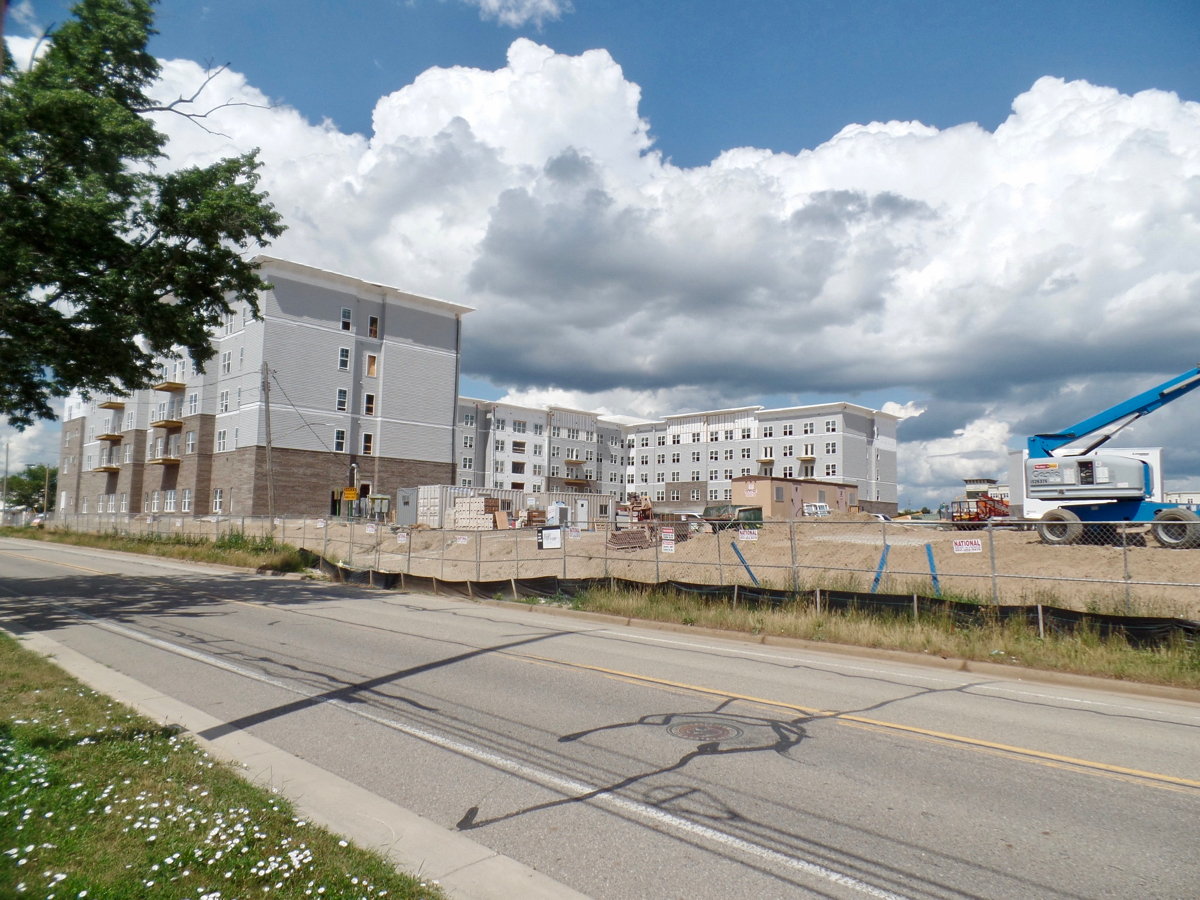 And another bunch of new apartment buildings they're putting there. I don't know who they expect to be moving in to all these apartments, honestly. 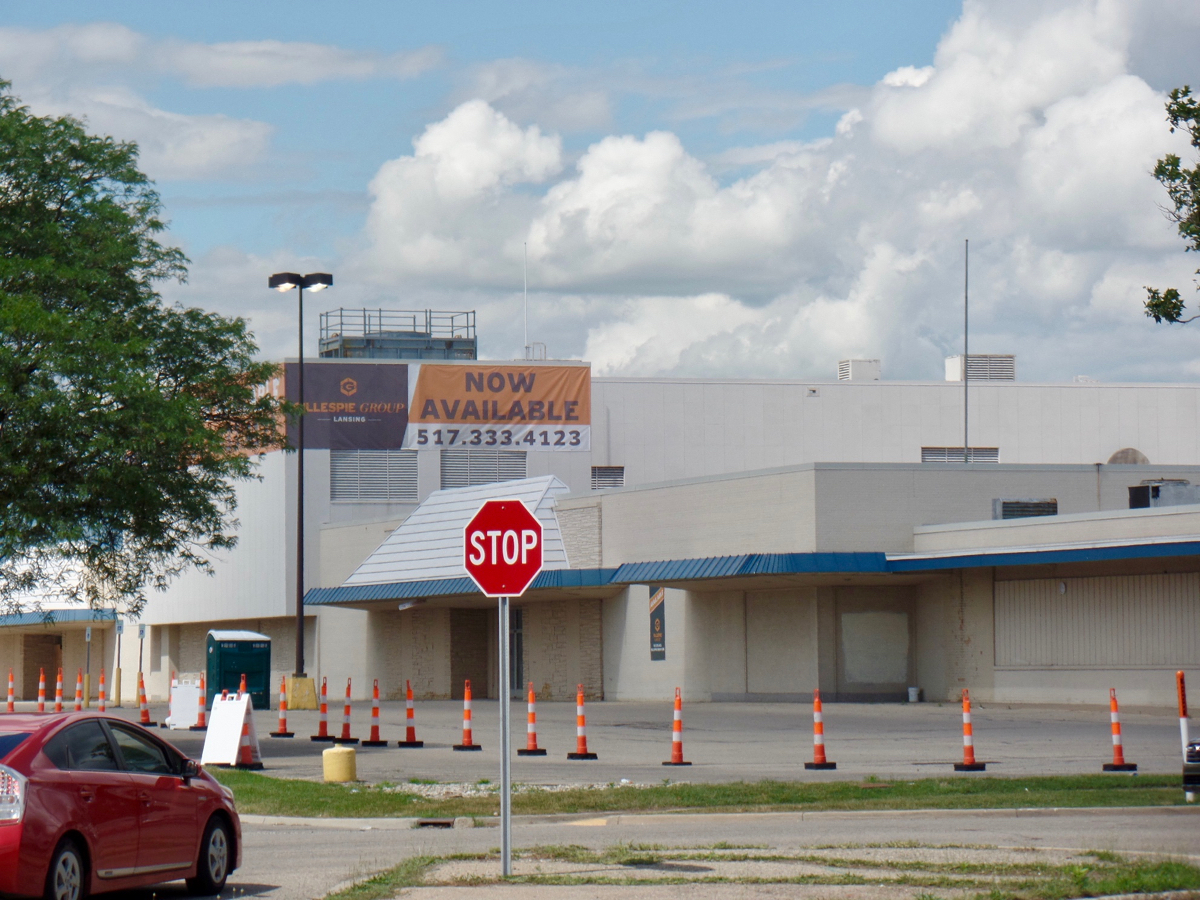 The former Sears building at the south end of Frandor. Sears was one of the original stores of this mall, back in the 50s, and nobody's sure what will come of the place although people are talking, hey, why not add some storeys and put in apartments? 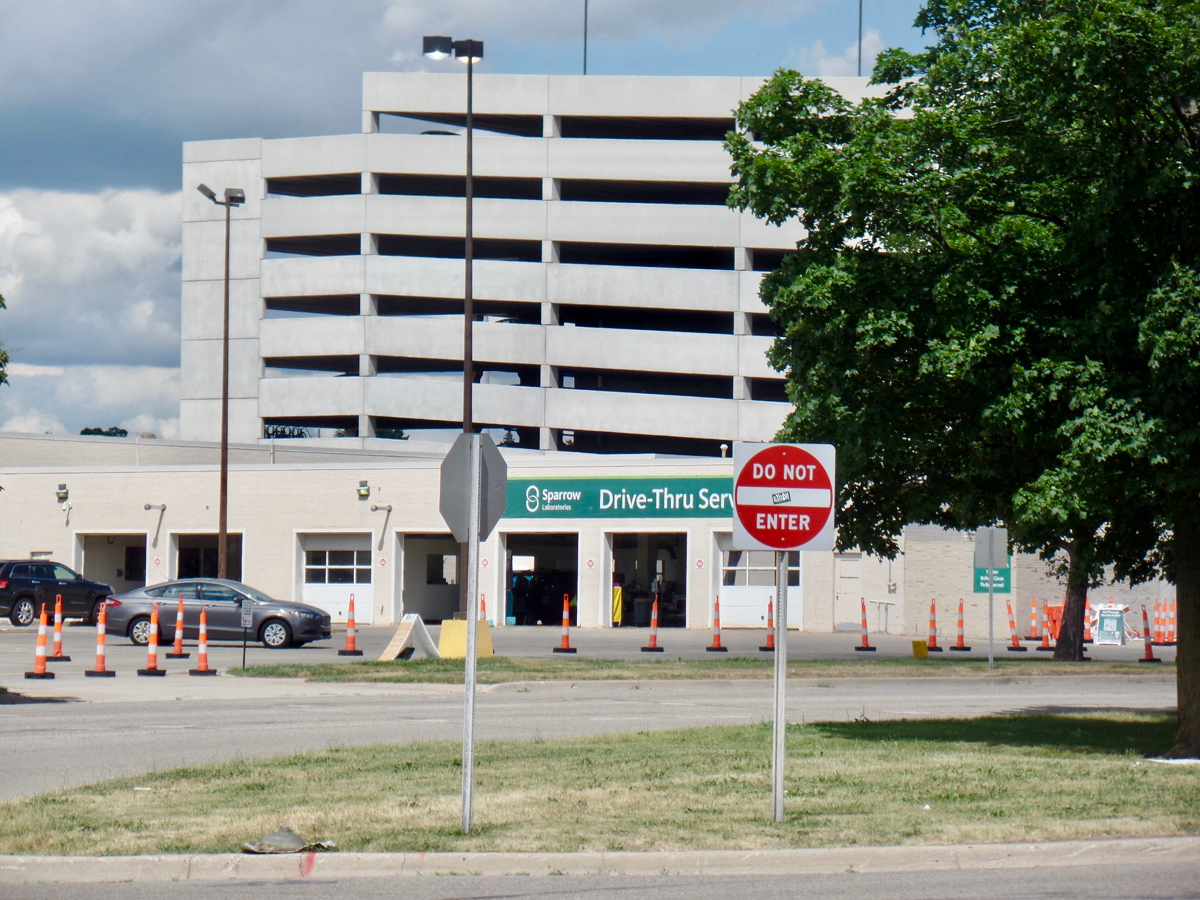 For now, though, it's a drive-through Covid-19 test and vaccination clinic, opened in the former Auto Service Center. In the background is another apartment building they dropped onto the east side of Lansing in the last few years. I have no idea where they think all these people are coming from that they need apartments.

Trivia: In 1979 a United States District Court ordered the American Society of Mechanical Engineers to pay $7.5 million in damages for antitrust violations against the Hydrolevel Corporation, a company making boiler feed-water indicator devices. The chair and vice-chair of the ASME subcommittee on hearing devices were president and vice-president of research for McDonnell & Miller, the company dominating the American market for heating-boiler safety controls. (The Supreme Court upheld the verdict.) Source: Remaking the World: Adventures in Engineering, Henry Petroski.