Through methods I am not at liberty to divulge

porsupah had a code to watch a stream last week of Edgar Wright's documentary The Sparks Brothers. She, unable to use it, again for reasons which I do not here divulge, passed it on to me and

bunny_hugger. You do almost certainly need a little more Sparks in your life. So I can mostly recommend this, with the reservation that it's two hours and twenty minutes long. So if you don't already have an interest, that might be a little too much Sparks all at once.

It is a celebratory documentary, one making the argument that this is a more important band than its commercial success suggests. This is an honorable goal. But if you already accept that this is an important band deserving of attention --- say, because you're up for a 140-minute documentary about them --- then it's not challenging your preconceptions much. Wright decides to have at least a bit said about every one of Ron and Russell Mael's 25 albums. This makes sense as an organizing principle, since the band did shift its sound and focus so many times. But it also means they're looking for nice things to say about a minor album like Whomp That Sucker or Plagiarism. And that instead of looking at their work with a critic's eye.

Like, a recurring theme is how Sparks achieves a mild commercial breakthrough --- and something that makes other musicians call their friends to ask have you heard this --- but it wasn't followed up with something building on that. Why not? How much does this drive their explorations into new sounds? There are a few moments that approach exploring ``why''. Weird Al, for example, observes that the American music market treats ``funny'' as a thing rock music Should Not Have. Sparks doesn't do comedy music in quite the same way as Weird Al or (to mention someone not in the documentary) They Might Be Giants do. Or --- to mention an influence quoted in the soundtrack, that seems like it should have got mention in text, and that also seems to be under-popular --- the Kinks. You could imagine, say, Sparks doing ``Good Enough For Now'' or Weird Al doing ``Have a Cuppa Tea'' or Ray Davies singing ``Angst In My Pants'' without doing too much violence to the songs or the bands. What it is that Americans (mostly) don't want in funny rock, and British audiences do, is worth some exploration.

Especially since, in discussing the 70s, there's the progress of Sparks being more successful in Britain than in the United States. Their label tried several times moving them to the United Kingdom, building up some success there, and then trying to transplant them to the United States without it working. Granted, the logic of ``now that they're doing well, bring them to be big market'' makes sense. But what was going on that the label kept trying when it wasn't taking? Why not stick with the moderate but reliable success? (I know, I know, but the alternative wasn't working.)

Which comes to the piece I'd have liked to know most about. When the band first formed it was Ron and Russell Mael, plus musicians filling out the band. They were fired, to move (back) to England. The documentary interviewed some of them who admitted, yeah, that was painful even though it was right. It was hard. All right: who convinced the Maels that this was hard but right? Who told the band? And, when they moved back from England to Los Angeles (for good), they fired the British musicians; how did that go, and how did it compare to the first firing?

All this is complaining about the documentary that it chose, and was clear about choosing, not to be. And what is, is largely great. Especially in the earliest pieces, about how the band first formed and got a record label to agree this was a band someone had to hear. (They joke a bit too earnestly about how their college band name, Urban Renewal Project, could never have worked. It turns out there is a Los Angeles-area band by that name, that formed in 2010. I guess the joking about the name was a tip of the hat to them) Or stories about life-changing moments of luck. Most interesting here is the time they bluffed a journalist about how their next album would be produced by Giorgio Moroder. The journalist was a friend of Moroder and had talked with him a few days before and he never mentioned such a thing ... but she could introduce them. And so we got No. 1 in Heaven, a much-needed new hit and a pioneering bit of synth-pop.

And that represents a lot of the tone of the documentary. As I say, it's celebratory, urging you to agree that it's great these nice things happen to these hard-working people. So it is, although it leaves the documentary struggling to discuss the gap between Interior Design (1988) and Gratuitous Sax and Senseless Violins (1994), when we're told they were working hard, all day, every day, but not getting anything that any music label was interested in. Which seems odd since that's a triumph of determination and faith and self-assurance, and all we get to know is that ... it worked.

Ron and Russell Mael are famously obscure about their personal lives: even Wikipedia doesn't offer an opinion as to whether either is married, or has a partner, or ever has. The documentary doesn't change this obscurity much. They acknowledge that they've had at least two relationships. We learn their father was an artist, and that in high school Russell was a quarterback despite looking to be about one-quarter the size of his safety gear. And that's about all.

One of the tantalizing glimpses into their personal lives is in seeing their basement recording studio. It sure looks like Ron has a framed, autographed picture of Russell on the stairs to his basement. It's a very natural wry joke for them, although we don't see it long enough to make out what's signed there.

It's a very funny documentary, opening with the Maels quoting their own Sparks FAQ (``Are you identical twins?'' ``We are brothers.'' ``How did you meet?'' ``We are brothers.'' --- and, sure, but how did you both decide to be in the same band?). The identification titles alone are worth pausing and studying. For a taste of the tone, Nick Rhodes appears, labelled ``Duran'', while John Taylor, on the other half of the screen, is labelled ``Duran''. And, as I'd said, it's mostly about people saying nice things about a band they like a lot. It's hard to not enjoy that.

Everyone in the documentary is very hard on the 1977 disaster film Rollercoaster, in which they appear as the band playing while a safety inspector tries to foil a roller coaster bomber. Much harder than that movie deserves.

That got longer than I figured so what the heck, have just a couple pictures from some more walks around town. 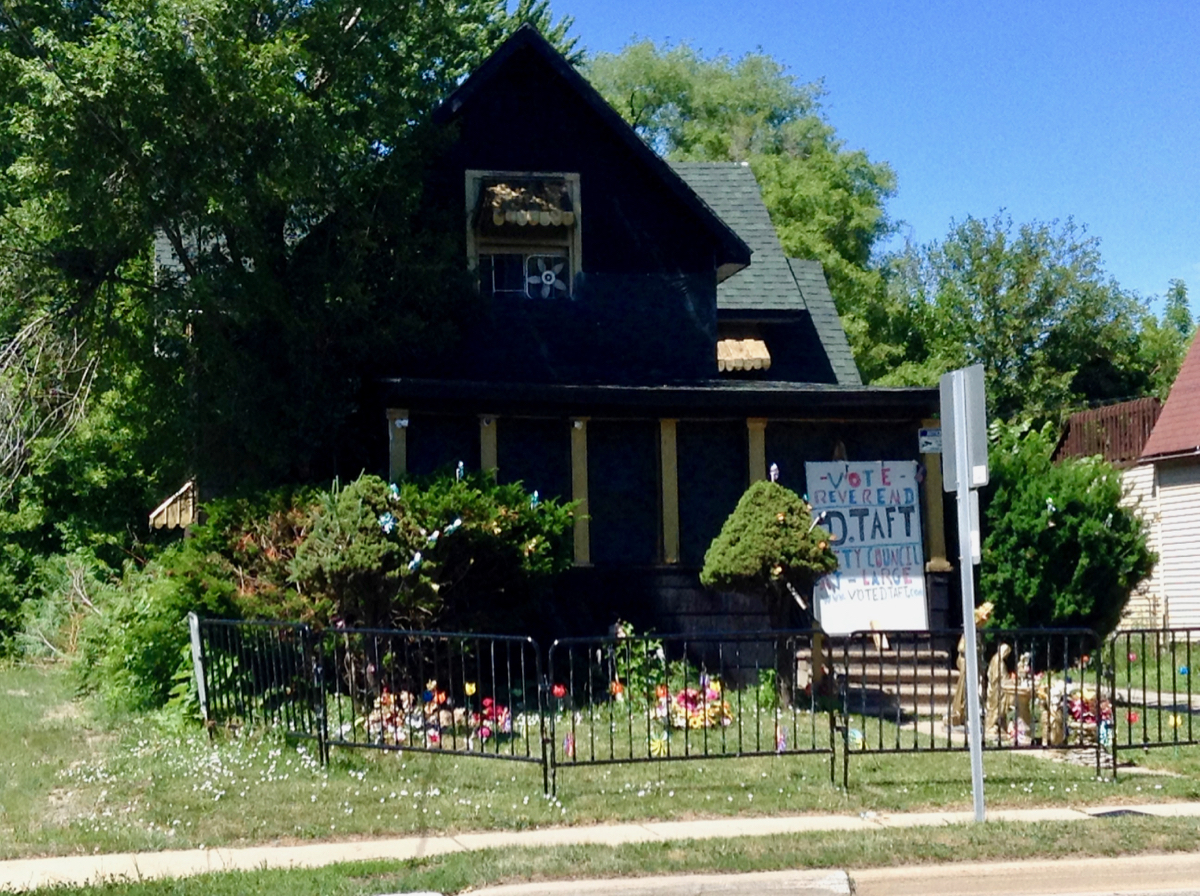 So, spotted on a walk that got me pretty close to Preuss Pets, but not close enough to drop in: a house that's painted all in black, with some gold trim, and decorated to command attention, and supporting Taft for City Council. 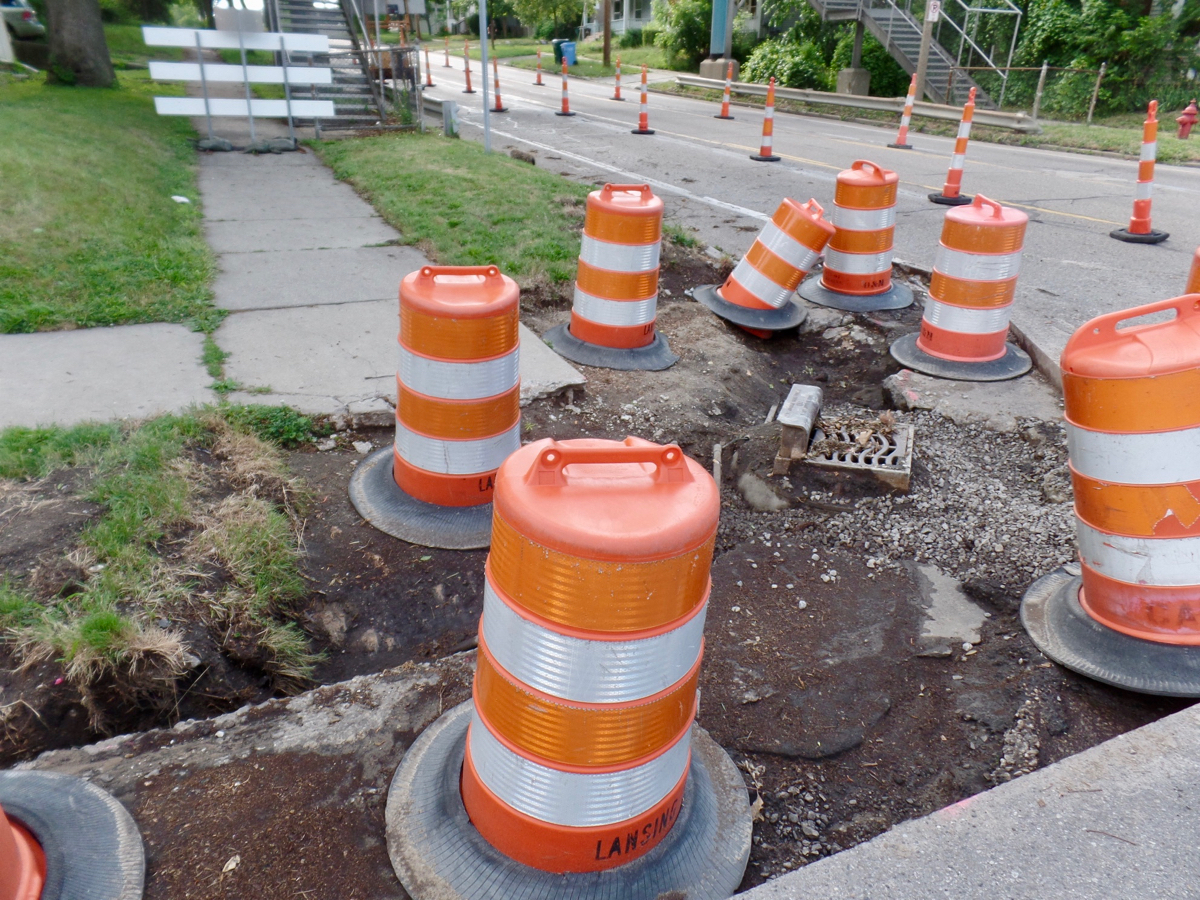 What did this sewer do to deserve getting the land around it torn out of the Earth? Well, I hope someone has plans to put that back.

Trivia: Milton Hershey had tickets for the first sailing of the Titanic, but business required him to sail three days early, on the steamer America. Source: Hershey: Milton S Hershey's Extraordinary life of Wealth, Empire, and Utopian Dreams, Michael D'Antonio. (While I don't have specific reason to doubt it, ``near miss'' stories are so good that I would like to see the ticket receipts, and maybe the letter applying for a refund, before I quite believe this.)

PS: I'm looking for topics for the Little 2021 Mathematics A-to-Z so if you'd like to see me explain things, this is a great chance! I mean explain things of interest to other people, for example you.