My humor blog is deep in the midst of another vintage MiSTing being mostly reprinted (I'm editing a few riffs), and then some thoughts based on Conan O'Brien's final show on TBS. Also, possibly my dumbest Statistics Saturday in a year of really dumb Statistics Saturdays so far. I'm honestly excited by it.

Let's carry on with a bit more walking around town last week, after one storm but before the really big tornado-generating one. 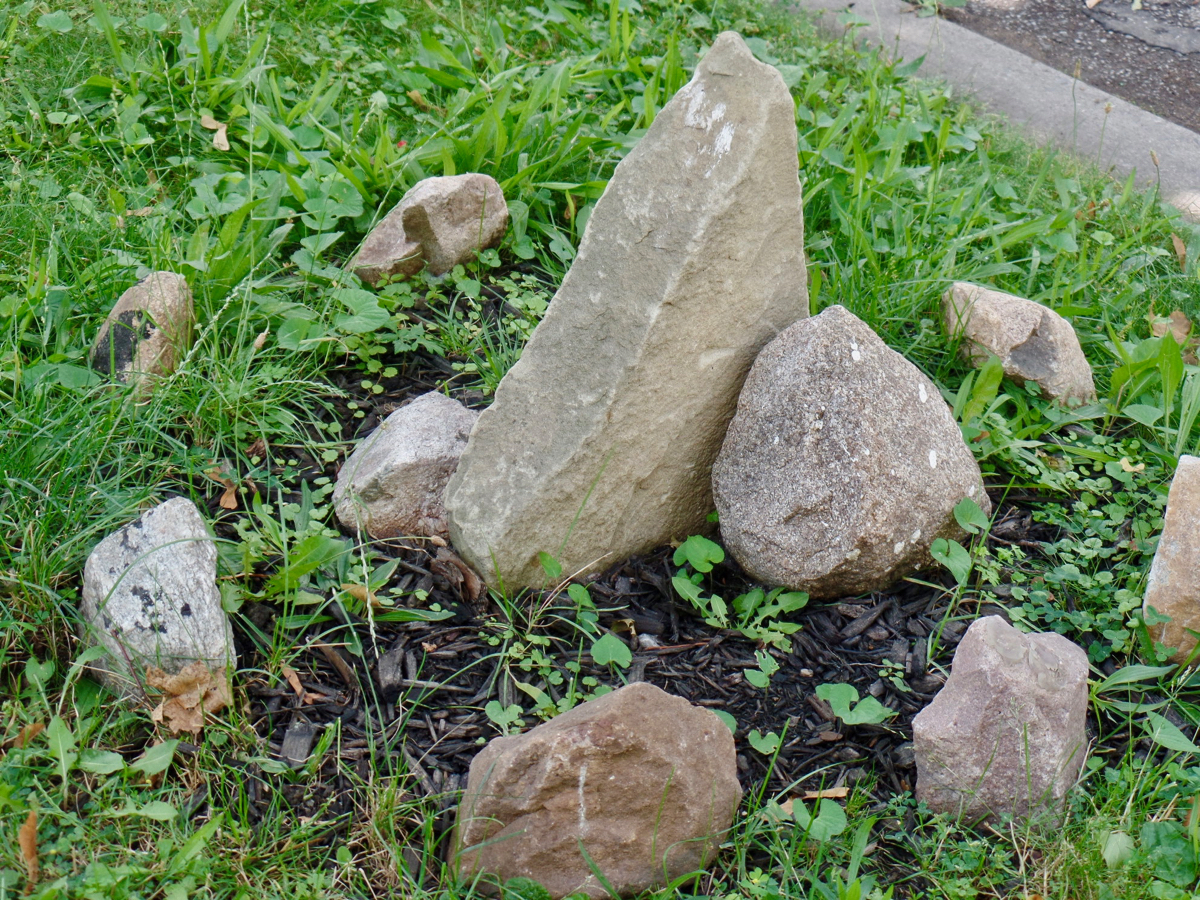 Stone sculpture inside someone's front yard that looks like an abstracted sundial or something. 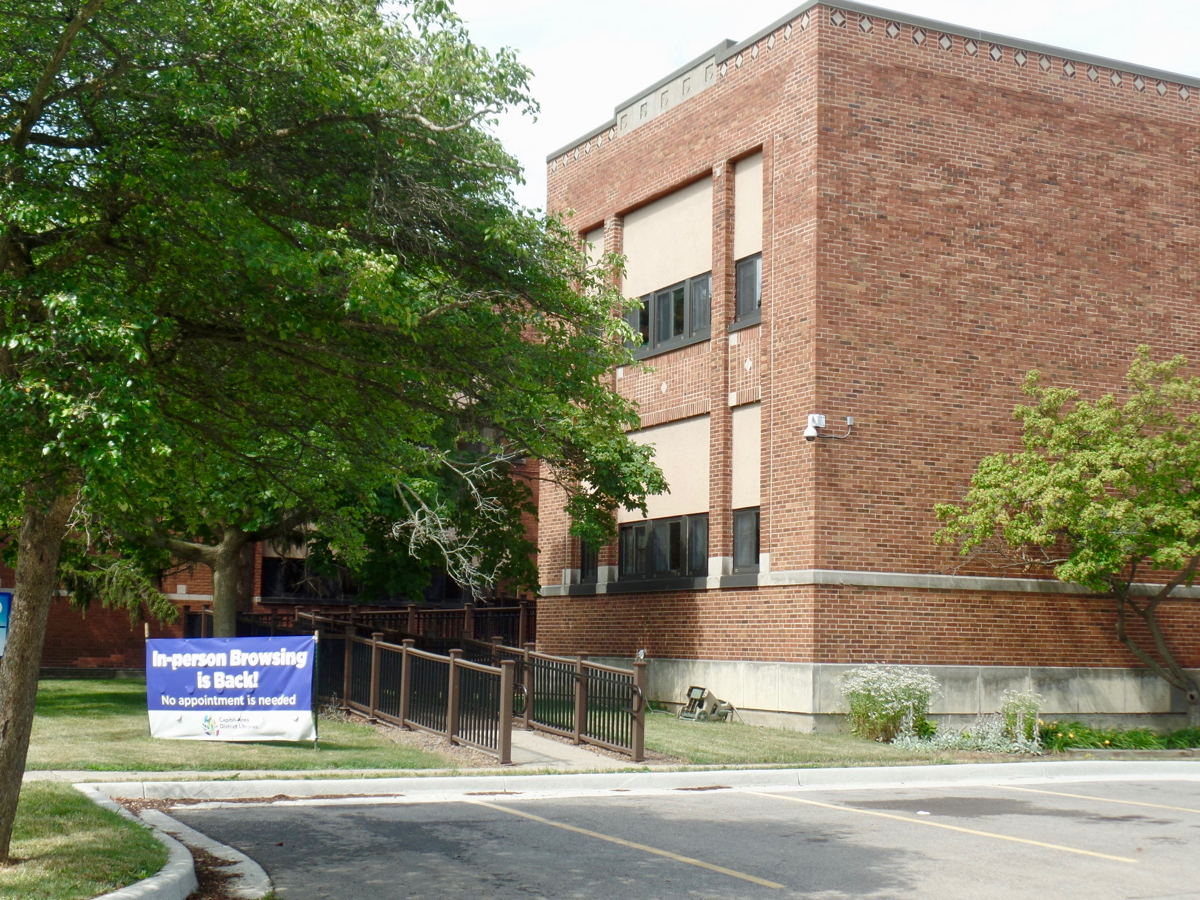 Foster Library giving us the good news about in-person browsing! ... Although this library has a tiny selection. It's in very convenient walking range for us, though. 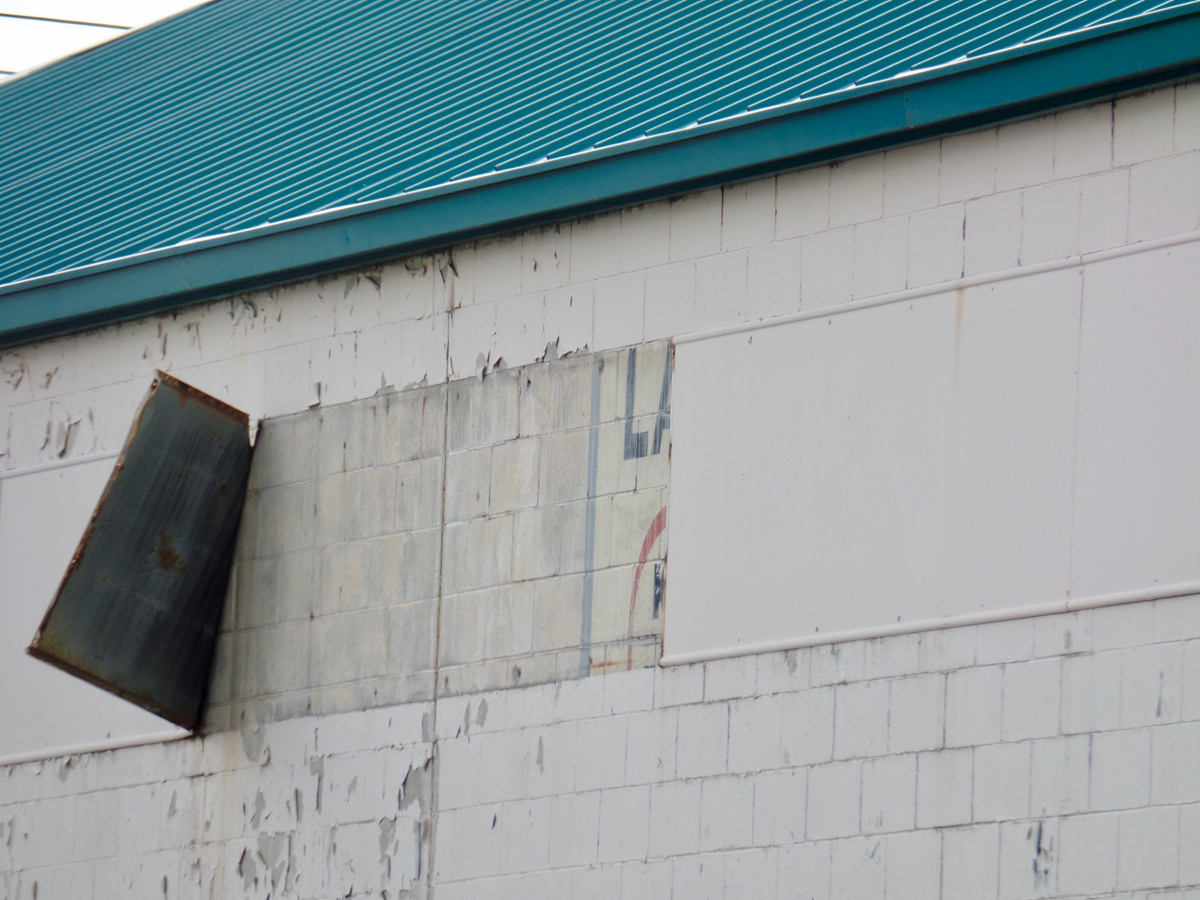 Vinyl cover peeling off part of the Muffler Man's building, revealing a sign had been covered underneath it. 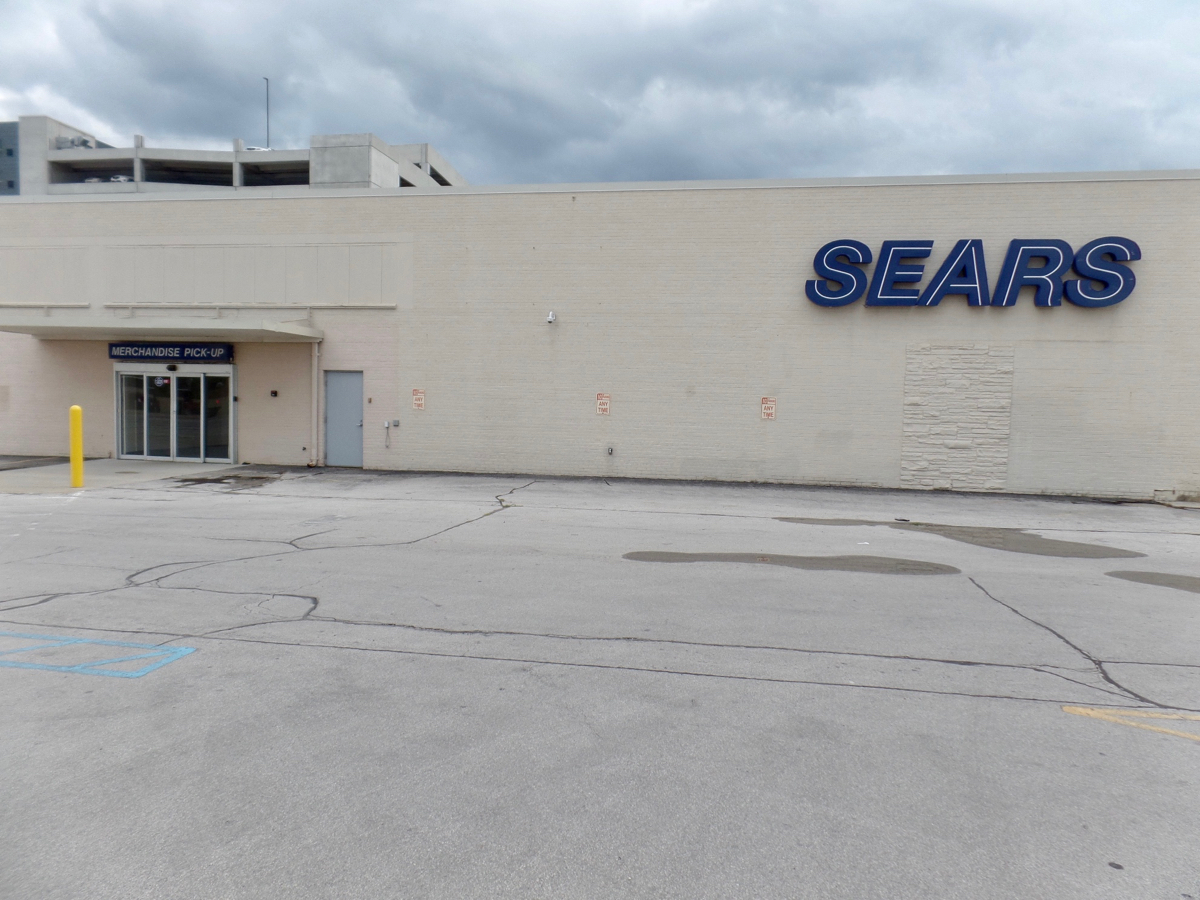 Sears has been gone nearly a year and a half now, but a few of its signs have still been left around. 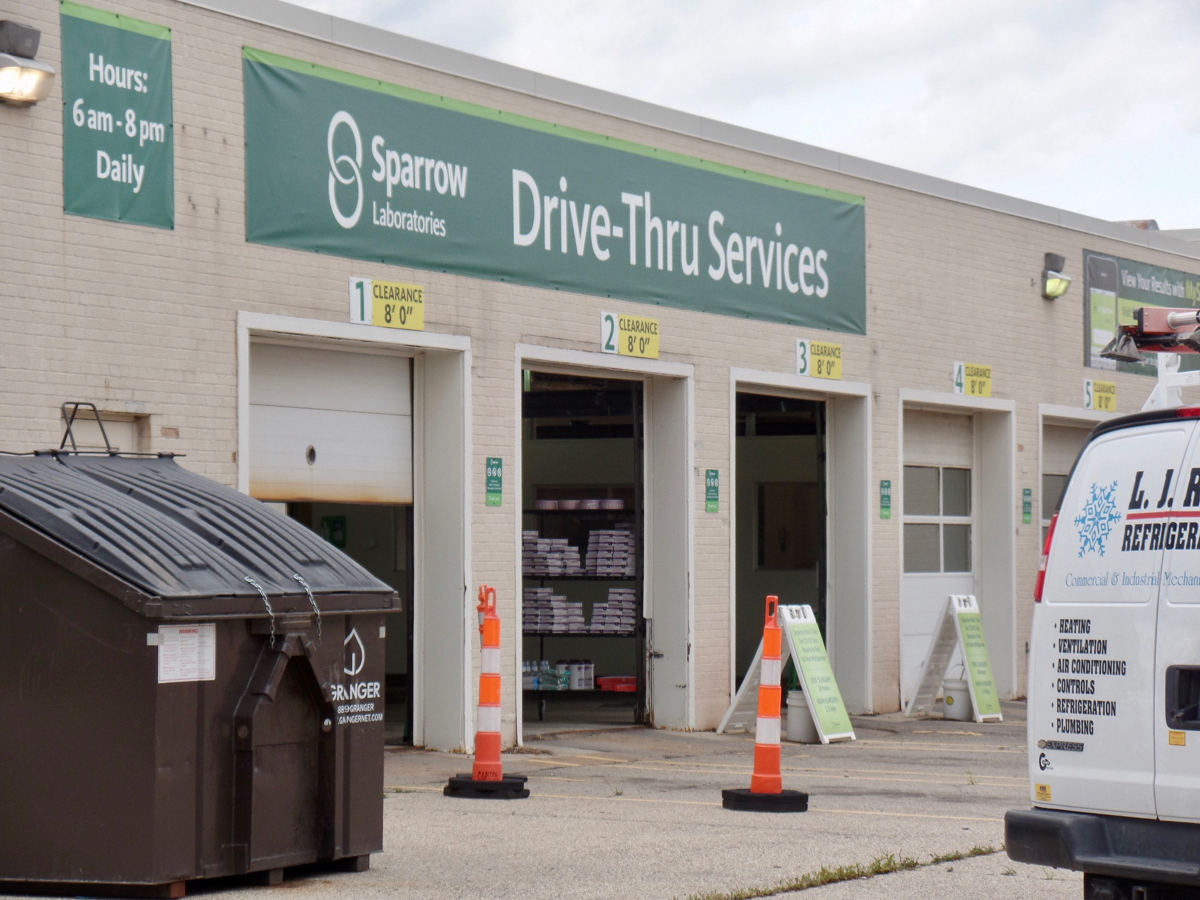 The former Auto Center is currently a Drive-Thru clinic offering Covid-19 testa and vaccinations. I was scheduled for one when a spot in Meijer opened up. 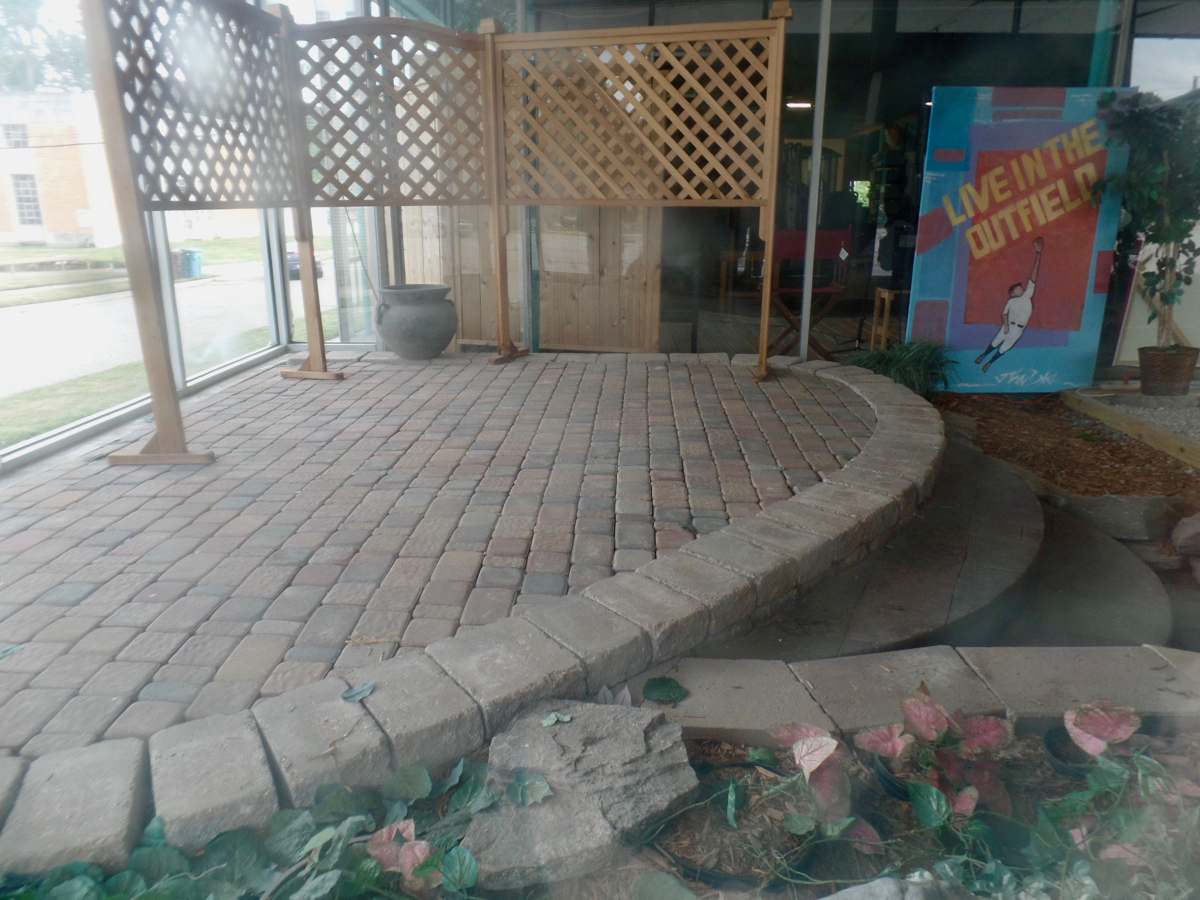 Walking back home. Here's a bit of scenery inside of Hotwater Works, the now-closed hot tub and Japanese spa center that also offered live music sometimes. I don't know that this was the performers' area but it would make sense if it were. The 'Live in the Outfield' poster is for people who want one of the apartments they built at the edge of the outfield at the Lugnuts' minor-league ballpark.

Trivia: Secretary of State James Monroe, pressed into service to scout the British landing outside Washington in 1814, failed to bring his spyglass and so was unable to count the number of ships or tell whether the British under Admiral Alexander Cochrane were unloading soldiers. Source: Washignton Burning: How a Frenchman's Vision for Our Nation's Capital Survived Congress, the Founding Fathers, and the Invading British Army, Les Standiford.

Currently Reading: DC Showcase presents Superman Family, Editors Mort Weisinger, Robert Greenberger. So this one story, Jimmy Olsen gets a million dollars because reasons, and the local gangsters figure it's easy to trick him out of it. They slip under his door a note purporting to be from Superman that says he needs all Jimmy's new money and he can't explain but bring it all to Spooky Abandoned House Road tonight. And we might laugh at Jimmy for taking this at all seriously except this was the era when, as

bunny_hugger put it, you were always seeing the townspeople asking Superman why he's using his heat vision to burn the library and Supes explains ``I can't tell you why''. Jimmy has good reason to think this might be legitimate, if he has no idea what Superman's handwriting looks like. (Well, maybe the gangsters reasonably assumed Superman would use the Palmer method really well and they had someone who could do good cursive.)