OK, so that's a development at work. Remember how they said they didn't expect any big changes in staff what with the buyout and all? There was a big change. The guy I had always thought of as the de facto office manager even though I guess he was officially just the guy in charge of tech has left. I don't know why, just got the word he wasn't with the company anymore, and don't send my weekly reports cc'd to him, and that's that. I shall have to prod around and see if I can get any insight.

Taking his role as the guy in charge of normal stuff is ... well, the person I've been mostly interacting with in getting my big project done. He's someone I only dimly knew from working at the place (he'd been at the other facility, back when the company had two locations). But he is also always crazy impressed with every single thing I do, so that's probably a good thing to have in the local boss.

Michigan's started, late but at least at all, a sweepstakes for people to get vaccinated. For a month there'll be a daily prize given, $50,000 to someone getting their first vaccination. For those of us who were getting a vaccine as soon as they could from wanting the pandemic to be over there's two drawings, one for a million and one for two million dollars. (There's also scholarship drawings for people between 12 and 17 years of age.) It's ridiculous that people need more incentive than wanting the pandemic to be over but if it works, fine, it works. I'll choke down three million dollars if they want to give it to our household.

Now let's have two days of photos from walking to the river and back, the day after that big rainstorm and the tornado warning and all that. And after that ... there's something different coming. Promise. But my photos now are up to ... Sunday the 27th. 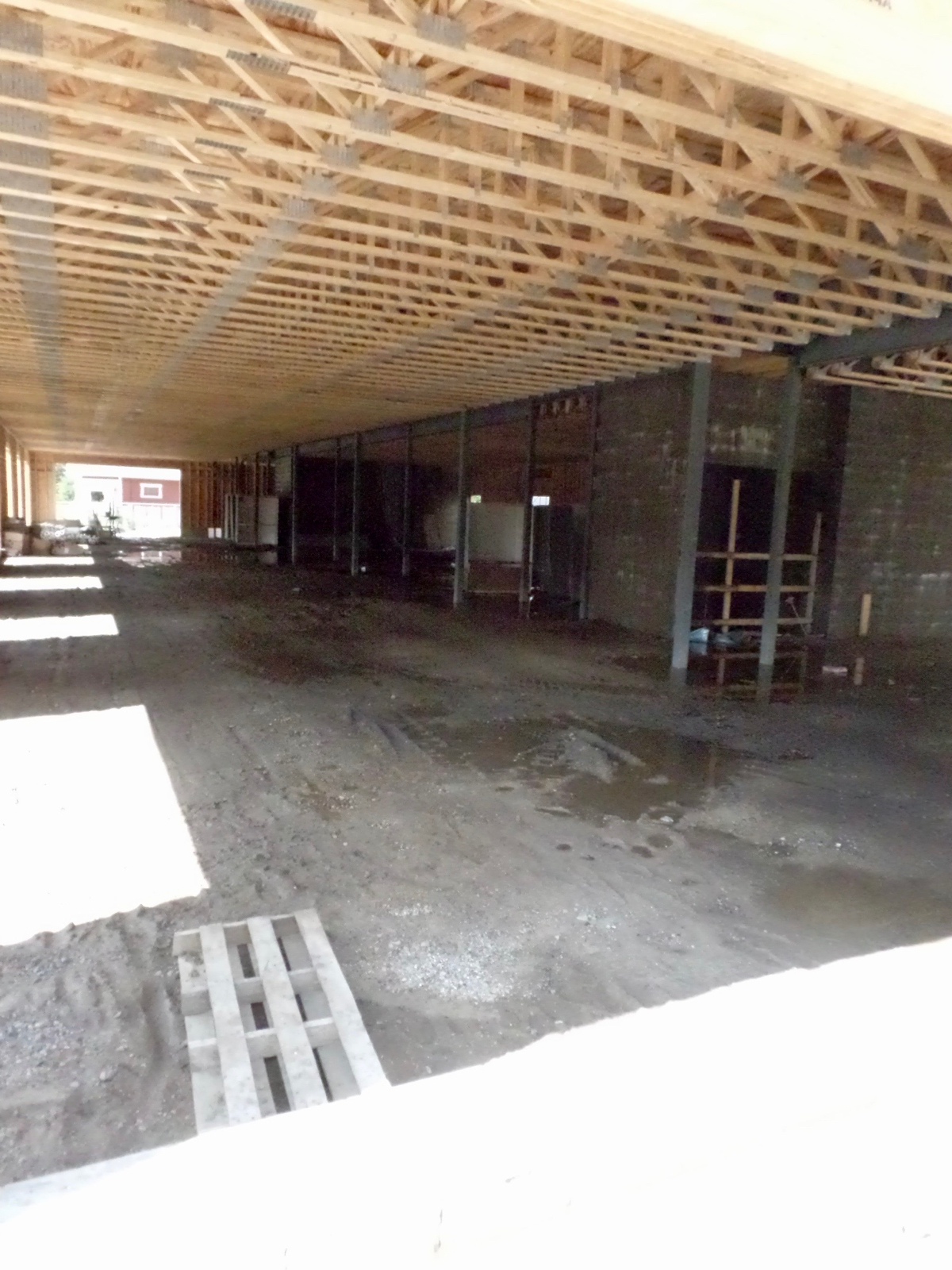 That void space underneath the new parts of the Allen Street Neighborhood Center. I had left my camera on too sensitive a simulated ISO (instead of letting the camera auto-select one) so the outdoor space got washed out, and I like the way it washed out. It's like I have a slice of building component in a white void. 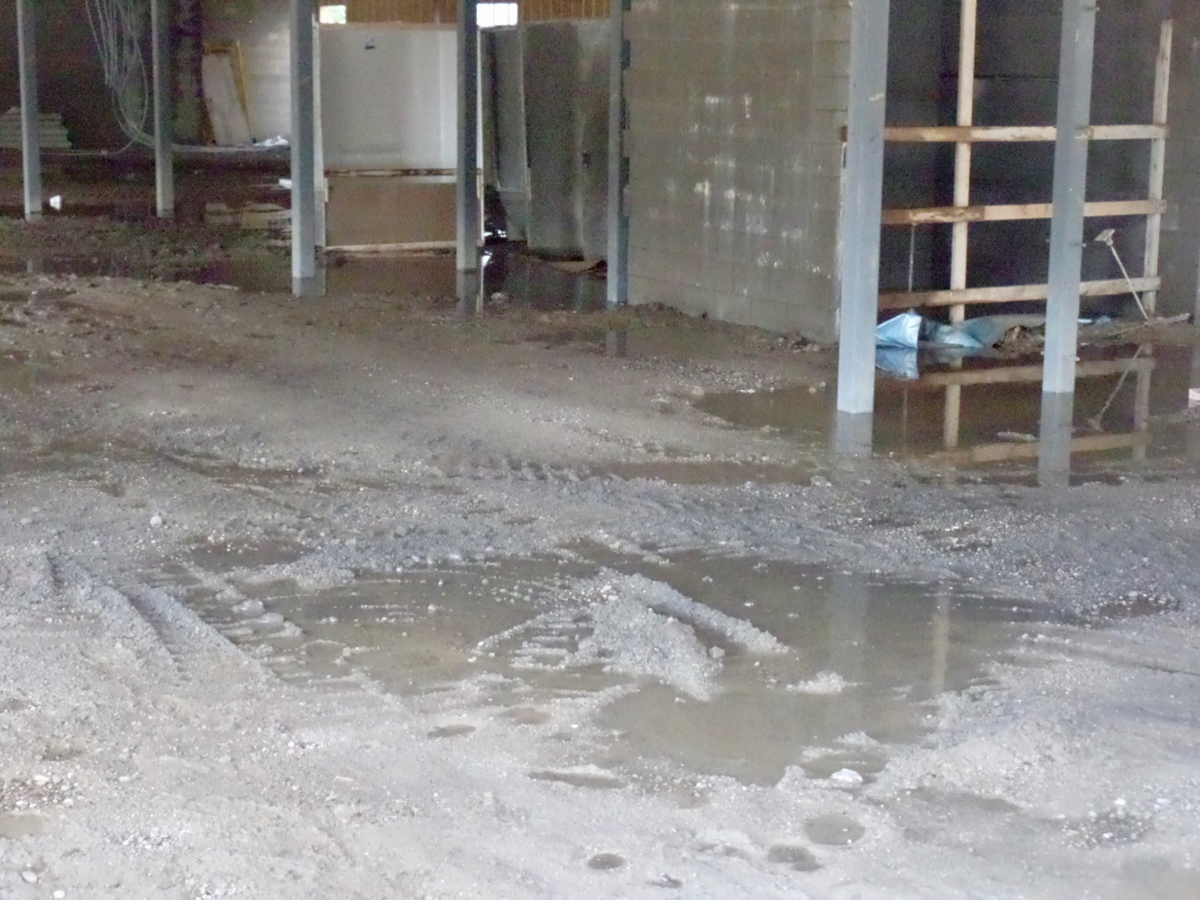 But here looking in you can see the rain was heavy and abundant enough to get pretty well underneath the covered areas. 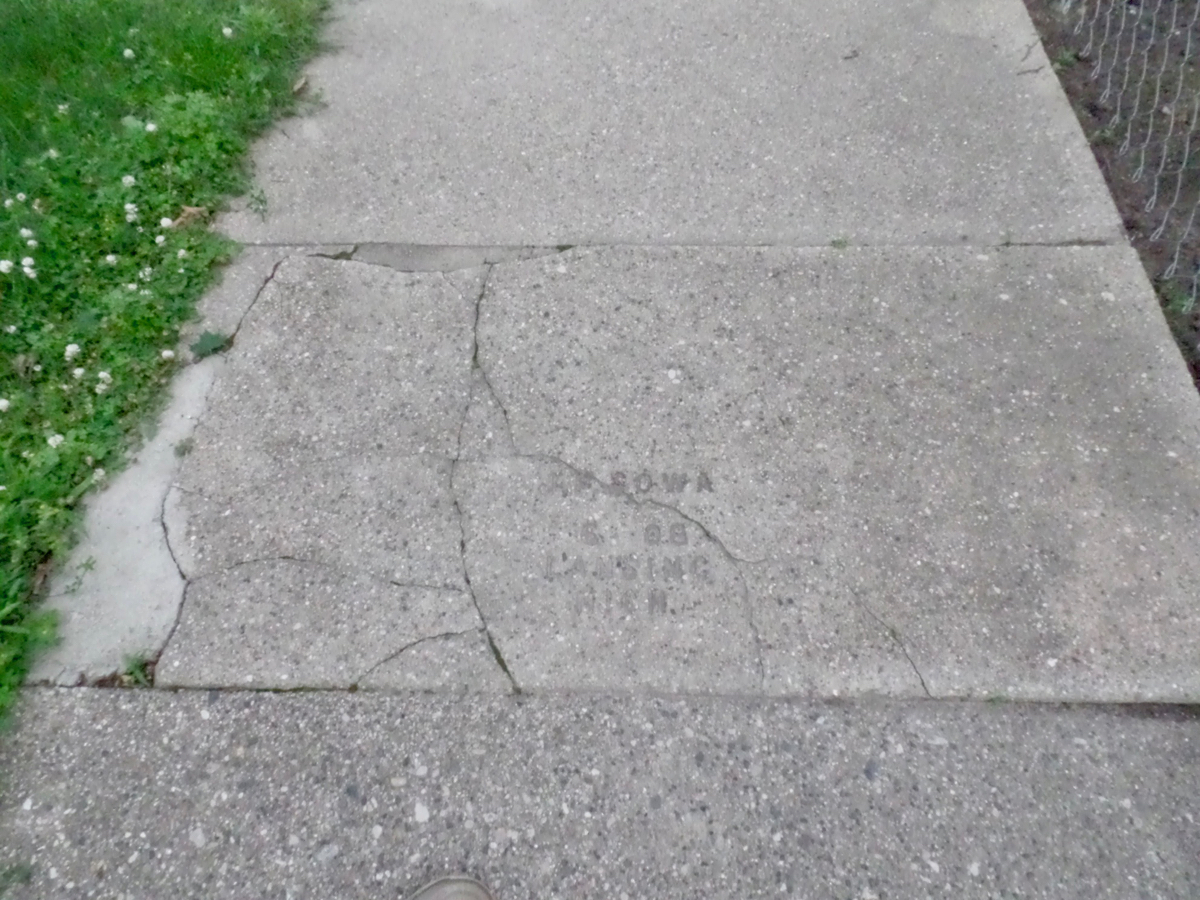 Something of local history: a sidewalk block we can date to June of 1908. It was one of

bunny_hugger's exciting discoveries for her sidewalk blog. She was also able to find evidence that members of the family lived not-too-far-away at least until the last couple years (and might still; she'd just found an obituary for one person who seems to be a Sowa). 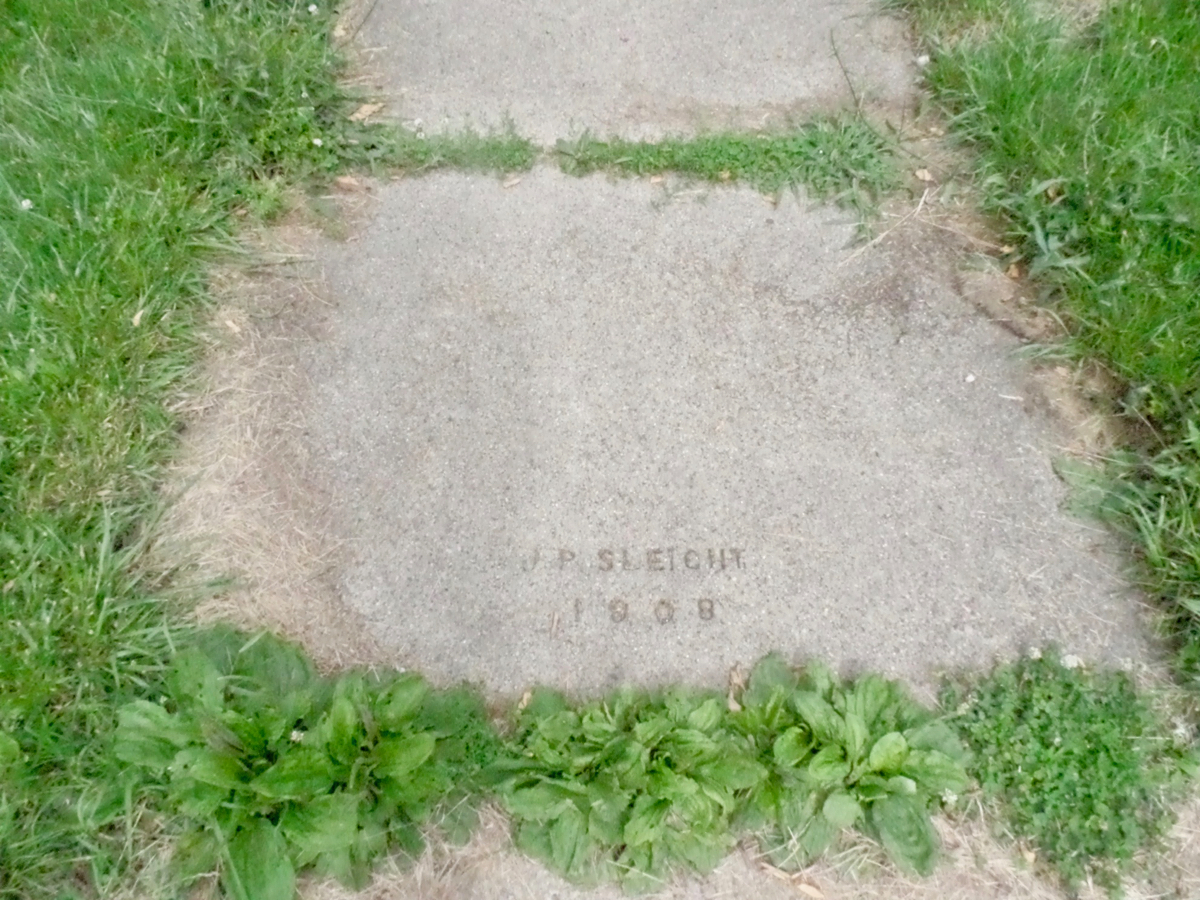 Another sidewalk laid down in 1908, this time by J P Sleight.

bunny_hugger doesn't seem to have covered this particular stamp yet (I'm surely just missing her entry), but she's familiar with the name. 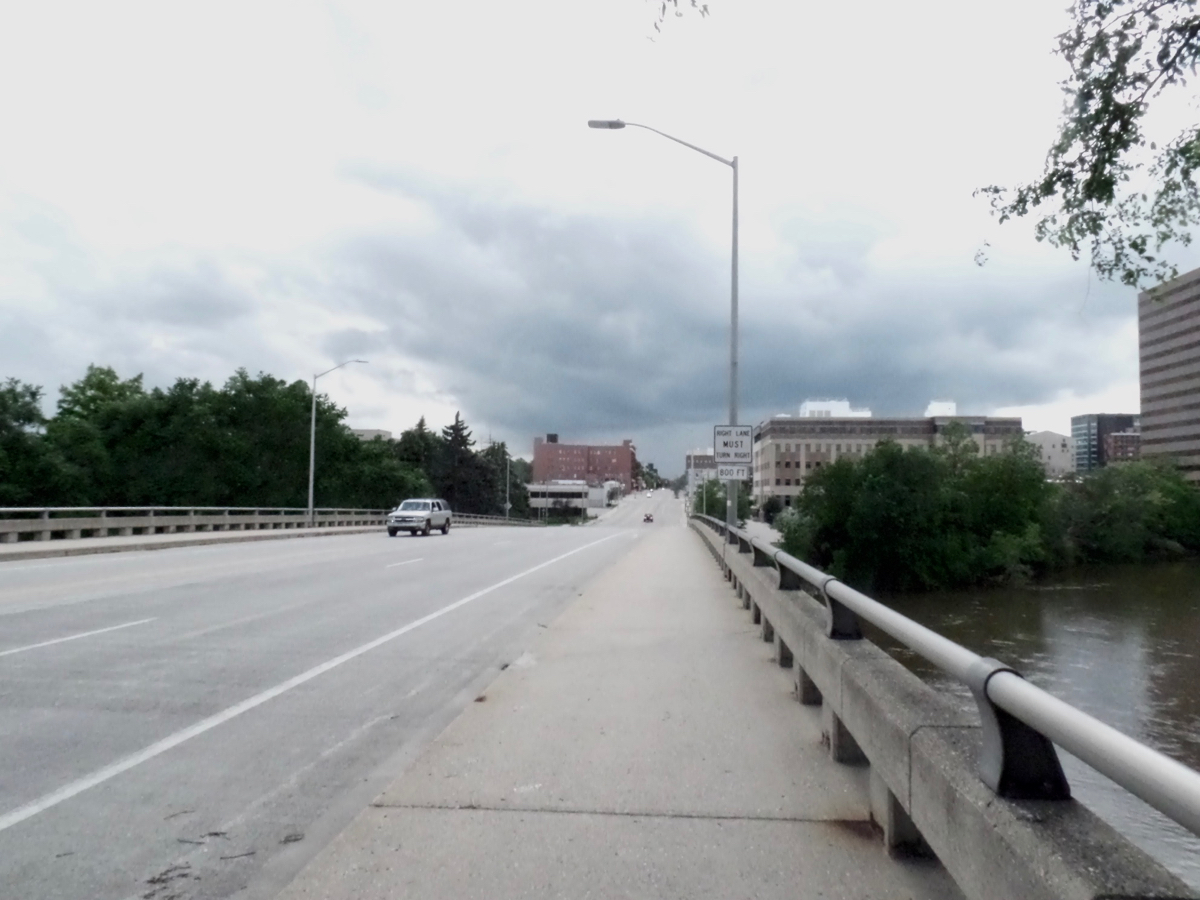 The Kalamazoo street bridge over the Grand River. And look at those not-at-all ominous, rain-bearing clouds in the sky! (It didn't rain. Maybe a little sprinkle but just enough to make you wonder if you felt something.) 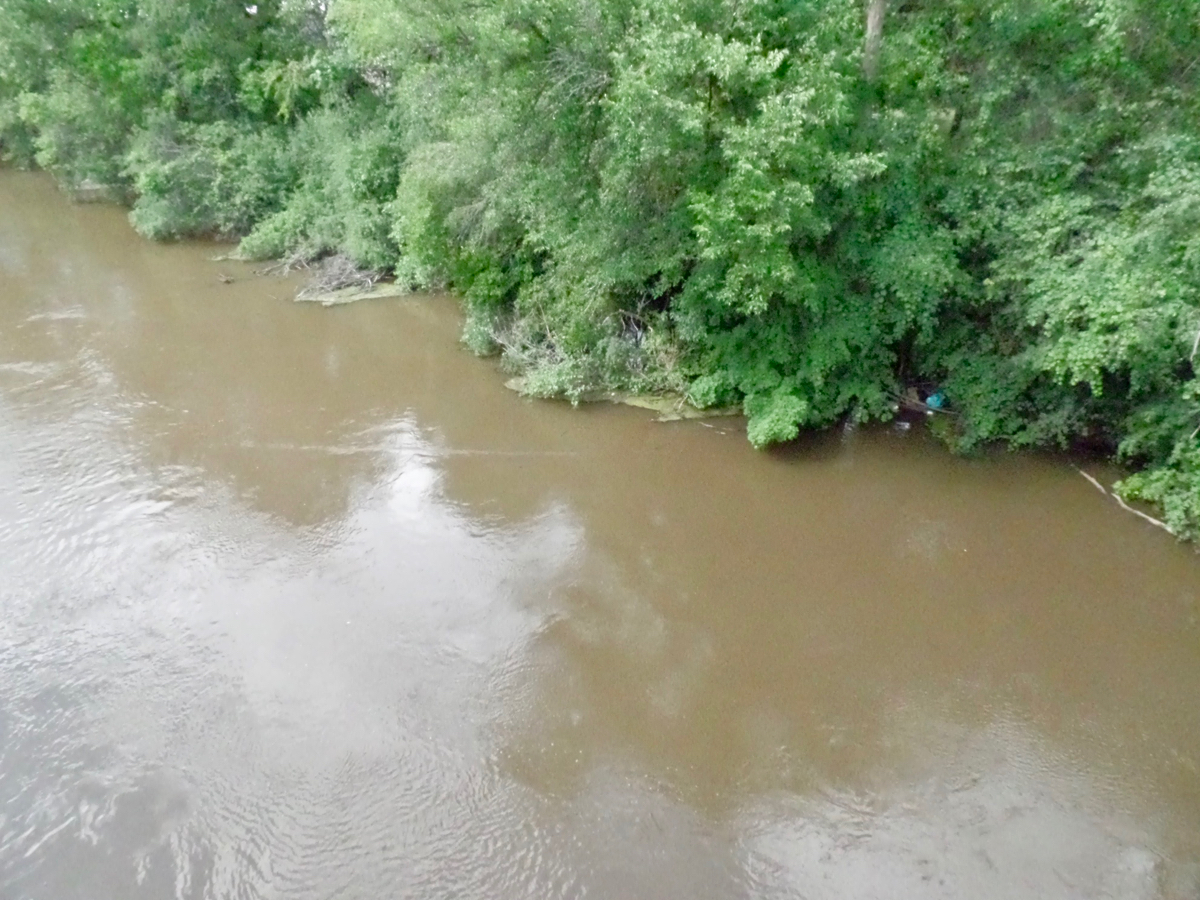 The vicinity of that concrete platform that I'd shared a photo of a week or so ago. So you can see the river's high and fast enough to obscure something that was maybe eight inches above the waterline before.

Trivia: Cyrus W Baldwin's water-balance elevator, invented in the early 1870s, had a design capable in principle of a rise of 1,800 feet per minute. (It is hard to see how it could be braked safely at that speed.) Source: Otis: Giving Rise to the Modern City, Jason Goodwin.