Wednesday was our anniversary, our ninth. The number of new infections in Michigan was only about half what it was for our eighth anniversary. But the day felt much safer, more hopeful.

The traditional ninth anniversary gift is pottery. For a wonder I looked that up ahead of time, and had gifts appropriate to that: a couple of small ceramic pitchers (one a sugar holder), vintage Cedar Point merchandise. I had thought the seller said they were from the Town Hall Museum's collection, a point to inspire mixed emotions. But in going back to check what precisely the listing said I ... can't figure how to make eBay tell me what the listing was, exactly. That seems needlessly annoying.

bunny_hugger meanwhile gave to me the gift of coatis. The biggest and most important being one that she had sculpted, and painted, using some sculpey clay left over from her parents making pawprint impressions of their dogs. She had started making this in February, worried that she didn't have anything suitable for our wedding anniversary, before she remembered that the end of February is our relationship anniversary. Besides this delight --- and a chance to manifest the ``terra coati'' pun I sometimes use --- she got two coati figurines from a German maker. These are gorgeous little pieces, coatis standing on two and on four paws, And that were made by someone on Etsy who's fantastically underpricing their work.

And then there was what to do for the day. We chose to do something that reflects our confidence in our own vaccination, and that --- despite the efforts of a great number of people --- the pandemic seems to be receding. We didn't make this choice rashly; we kept watching the seven-day infection running averages closely for the week leading up to it. But the last day before, everything looked still under control, and we committed to it.

We would go to Cedar Point for our anniversary.

This is, if I'm not mistake, the first time we have gone to Cedar Point for our anniversary. It was our first visit there --- or to any amusement park --- in twenty months. It would be inherently at least a bit weird: Cedar Point was still requiring reservations, even for season passholders like us, for admission, although they had announced that requirement would lapse the 1st of July. And the weather looked threatening, with the promise of thunderstorms, possibly severe storms, for almost the whole day. We decided to brave that, though. It wouldn't be raining all the time, surely, and even if it were we could ride the carousels and see the shows and just, generally, be in a place that's happy. We could take the driving time for that. (We need the driving time for that; we're almost a year behind the podcast we listen to in the car together.)

bunny_hugger's parents live just south of I-94), or out of the state of Michigan since January 2020 (true, and the first time driving out since October 2019). We made our traditional stop at the Speedway in Maumee, Ohio, just before the Turnpike. In a slight change from pattern I refilled the gas tank there, rather than wait for the way home. This out of the lingering fear that if the gas stations were closed on the way back we'd probably have enough to make it home but why make it so close a thing?

But there were no serious problems, not even with the weather driving in. We were even early enough we could have, in theory, listend to the Cedar Point traffic radio, which ends its broadcast at 1 pm, although we were more interested in the Greatest Generation podcast from August last year. Navigating through Sandusky wasn't hard, either, despite the long time away.

Cedar Point has done some renovations and made some changes, many of them meant for 2020. One was removing the Peanuts-character topiaries that had lined the causeway from Sandusky Proper into the park. One was a completely renovated gate system for the parking lot. The new arrangement looks nice, yes, although the directions left me confused about where to go and I ended up going to a gate that was self-serve. Scan your season pass and you get in. Nice enough although I'd wanted a gate where I could ask someone for a park map. Rumor is parks are using the pandemic year as an excuse to cut printed park maps and I want to keep demand high.

We had heard ominous things about the park being packed, even given the reserve-a-space requirements. But based on the parking lot? It seemed to be a not particularly heavy day. We parked near the same spot we usually do, when we aim for light-to-moderate crowd days, a spot near the 28th row in the parking lot. (They have posts numbering the 23rd, 28th, 33rd, 38th, and so on rows.) we used the last of an ancient bottle of sunscreen, and got some more from the new, and got ready for the day.

And now for a rare treat ... the text and the photographs are about the same thing! Enjoy! This will never happen again! 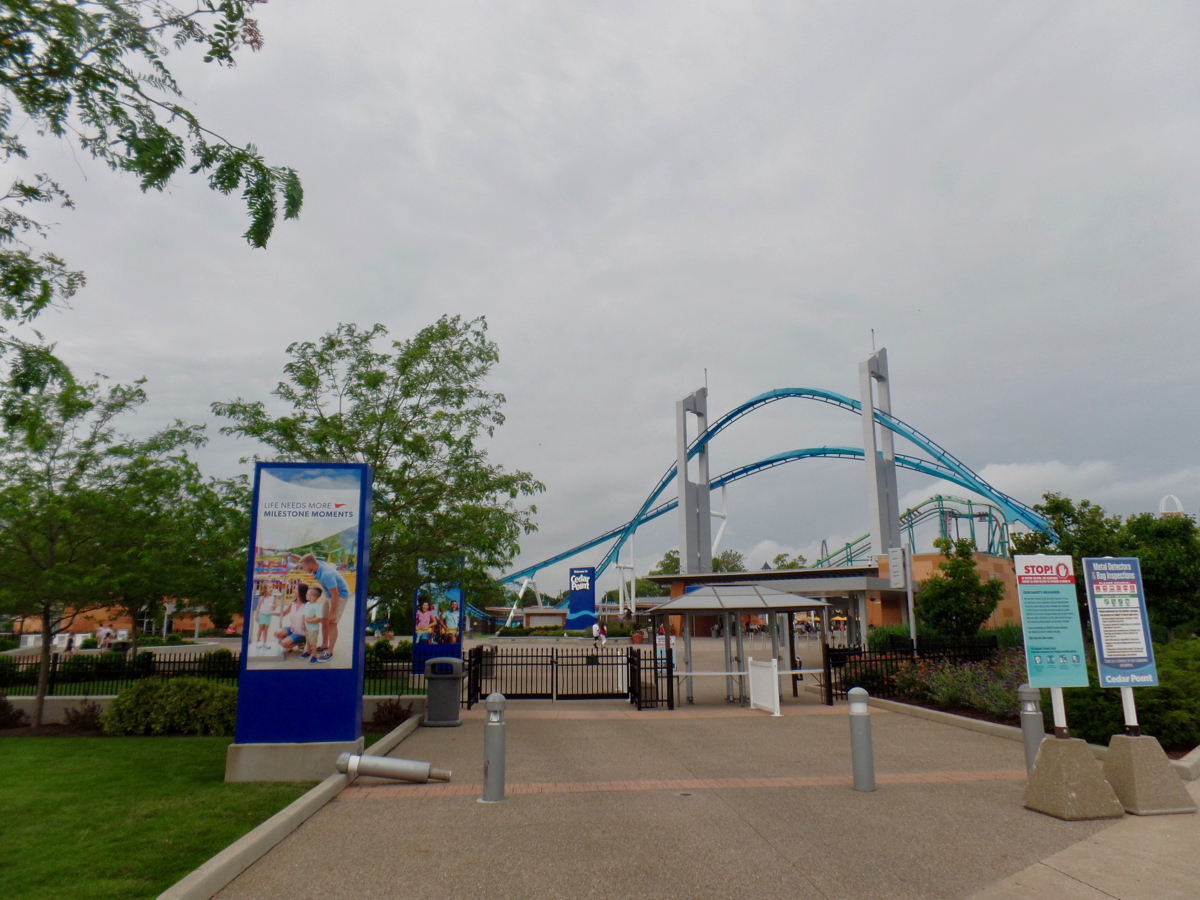 The approach to Cedar Point's main entrance, with GateKeeper the great arch above it. Note the metal detectors way out in front, though. Also those signs ... 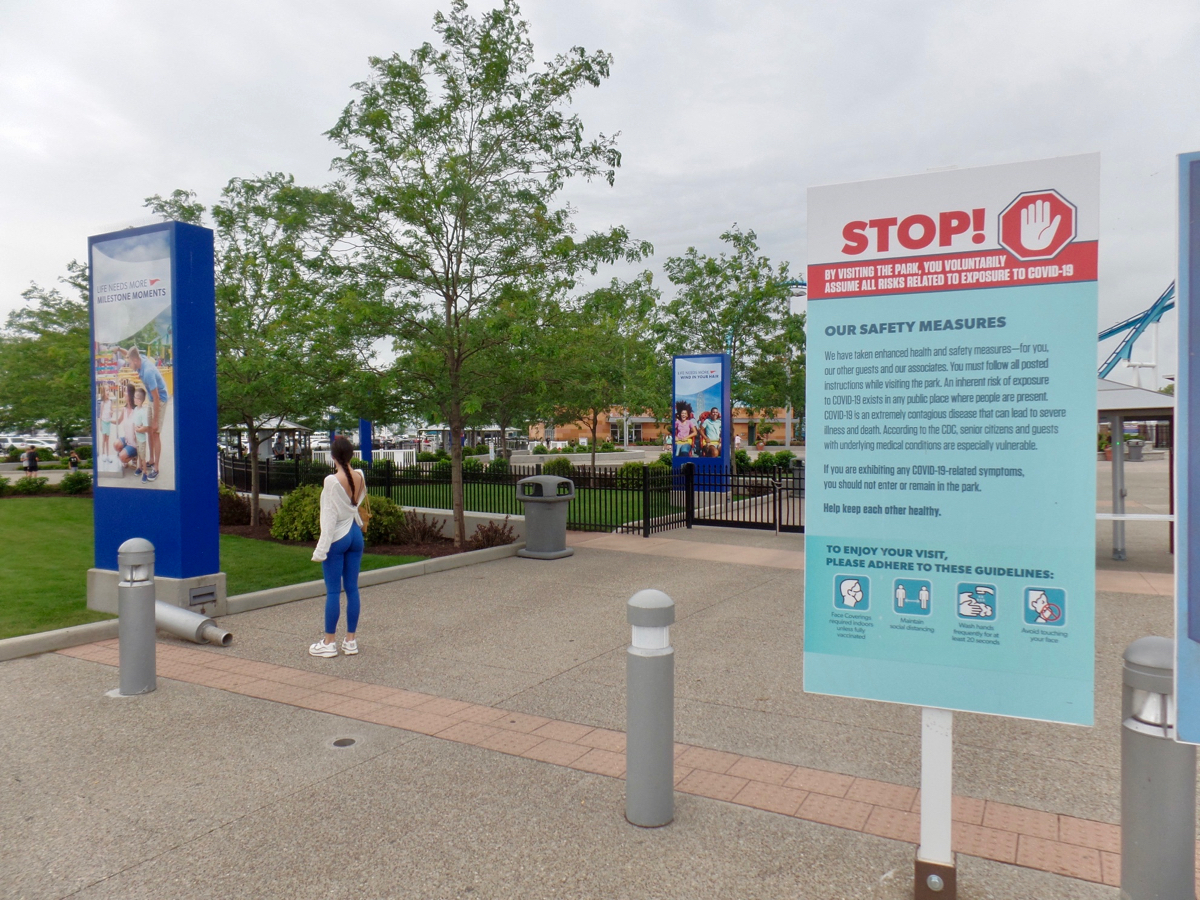 A sign warning about how much they are not responsible for Covid-19 risks, because what even is an ``attractive'' nuisance anyway, but it does give instructions on how to reduce your risk. Note that someone got one of the bollards out but wasn't able to make off with it. 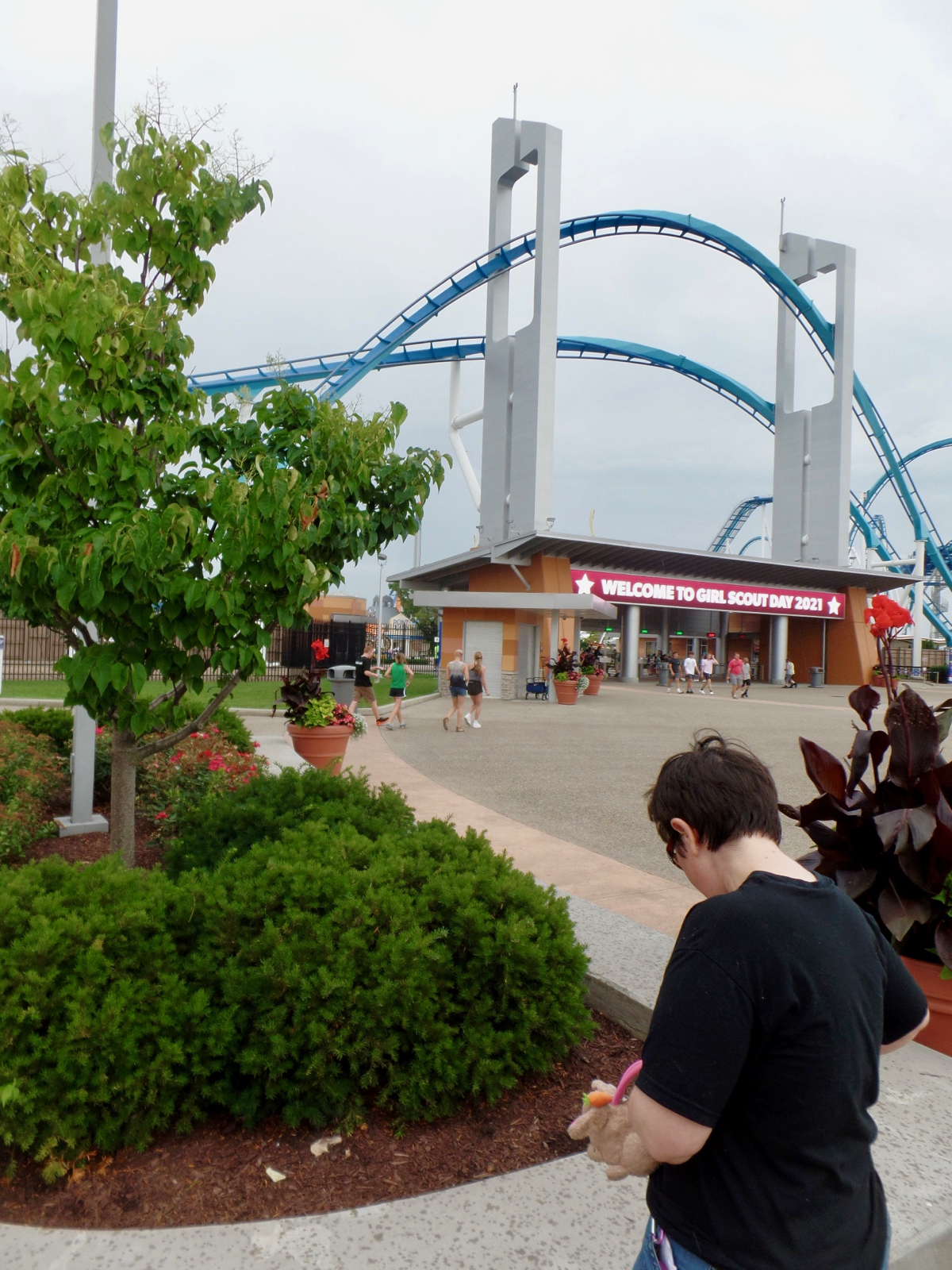 bunny_hugger checking her gear before we head in. And yes, it was Girl Scout Day 2021; they had a pavilion off somewhere and I saw Girl Scout leader-y types carrying around hard plastic binders of stuff. 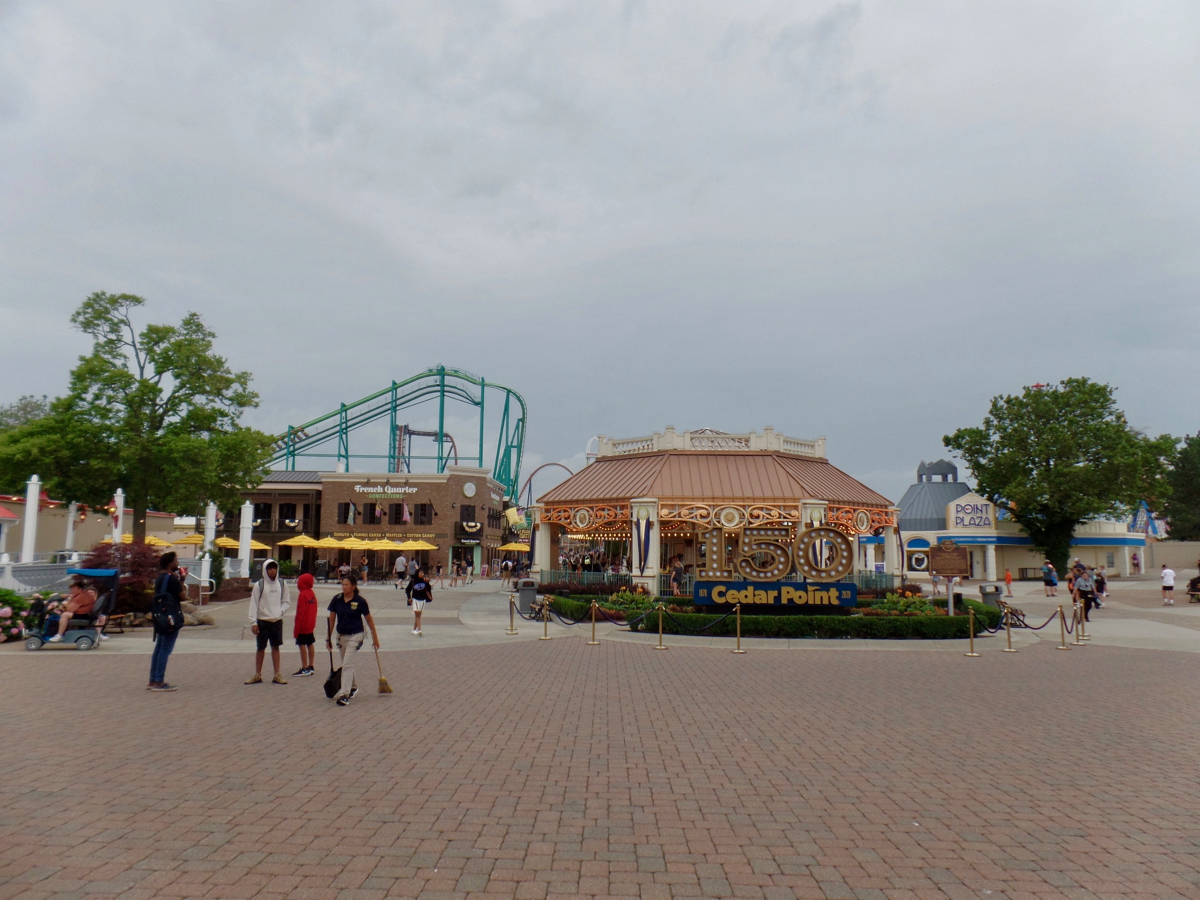 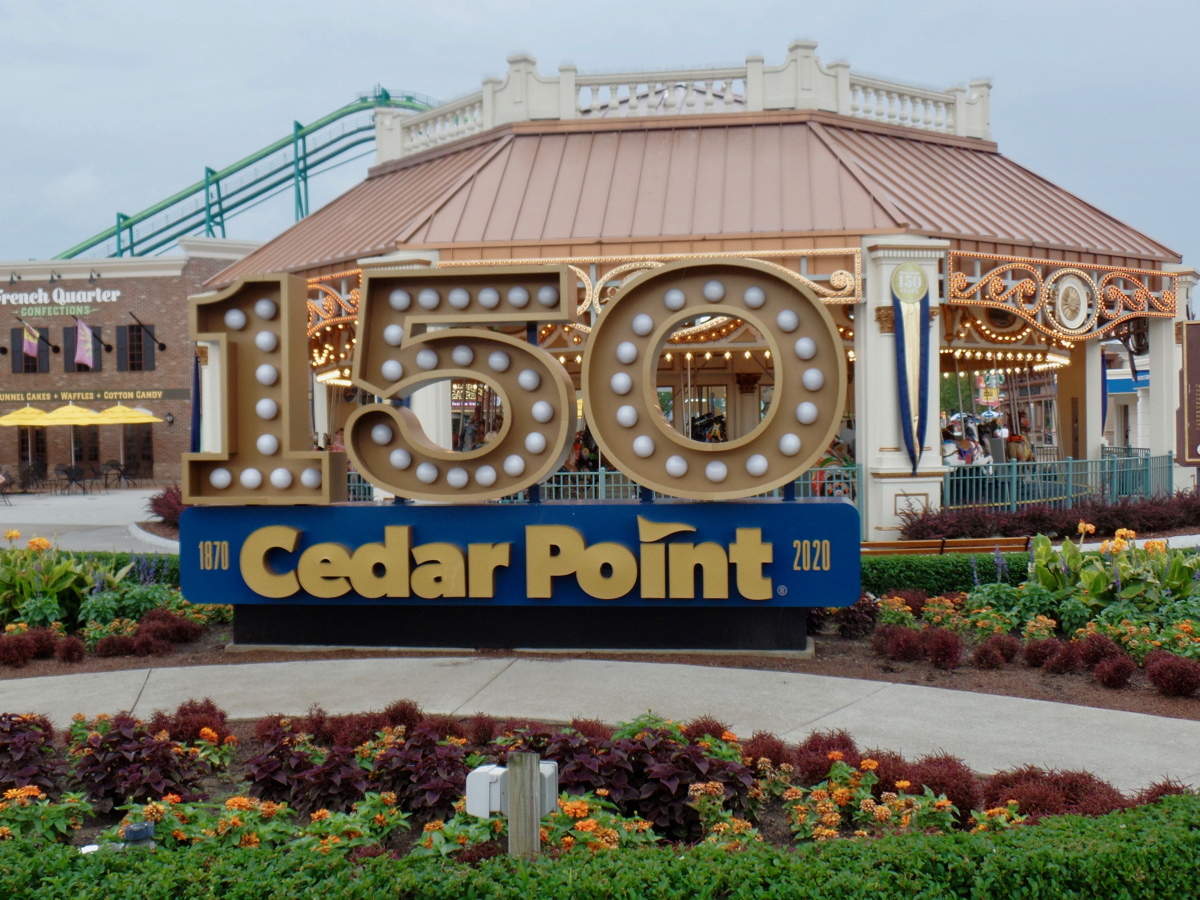 Cedar Point's celebrating its sesquicentennial a year late, with some justification. The lights stand and the walkway around it are new, but there had been a flower bed in this location before. Note the 150 Years ribbons decorating the carousel, too. 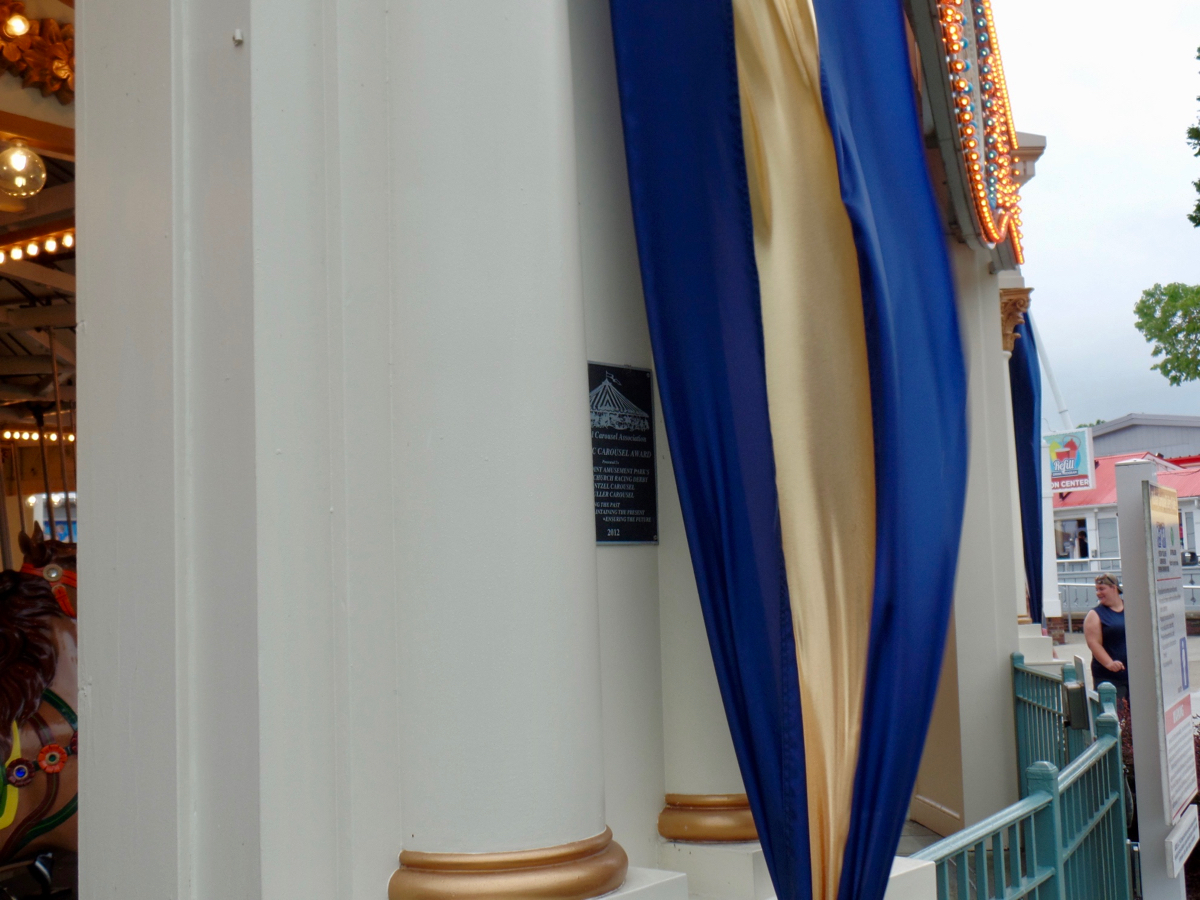 Sesquicentennial banner that unfortunately obscures the National Carousel Association's plaque commemorating the Midway Carousel. Well, can't have everything all at once.

Trivia: Grain yields in the Soviet Union declined by about one-fifth between 1940 and Nikita Khrushchev's rise to power in 1953. Source: An Edible History of Humanity, Tom Standage.

Currently Reading: DC Showcase presents Superman Family, Editors Mort Weisinger, Robert Greenberger. So first, are there any plots here that wouldn't evaporate if someone explained what they were really concerned about to the other? And second, seriously, are the other town gangsters sending their B squad to Metropolis so they can either shape up or get scooped up by Superman and either way stop being a problem?

PS: How June 2021 Treated My Mathematics Blog, revealing another blog of mine had a month where things dropped off some.