And then ... we stepped in, through the gates, admiring the Cedar Point 150 lights and the renovated French Quarter section. And rushed to the Midway Carousel, the first ride you see and the first ride we have been on since Kings Island's Vortex, back in October 2019. The carousel had sesquicentennial bunting on it and we were disappointed to learn they hadn't repaired the band organ. This despite having time, you'd think, and a big event to justify it. I quipped something about burning a CD of all our carousel music, and

bunny_hugger distracting them, so we could slip it into their boombox.

But the carousel ride was a success! And it felt so very good to do, even with the oddness that there's sanitizer gel dispensers at the exits. (Over the course of the day rides would be less and less likely to have gel in the dispensers.)

For the next ride we wanted a roller coaster, and the obvious choice, the one to end our 20-month drought, was Blue Streak. But it wasn't running. We could see them cleaning the ride, giving us hope it would run soon. But with that out we thought, well, why not go to other carousels? We walked past ValRavn and the Marina Entrance where we discovered the statue of Mercury had been moved back from the Town Hall Museum. Mercury had been at the Marina Entrance before ValRavn was built and it was great to see him returned.

The most convenient carousel to us was the Kiddie Kingdom, where we found a sign that the ride was ``temporarily delayed due to weather conditions''. A carousel. With an enclosure above it. Cedar Downs, the racing carousel, was open, though, and we got to there, even getting on the horses. But they didn't start the ride. They announced that due to inclement weather they had to shut down the ride. We were welcome to wait, in the queue area, or come back later. ... All right, then.

Between our attempted carousel visits, though, we passed the Legacy Walk, formerly a playful fountain, with bricks that many people bought names and inscribed messages for. We are two such people; we bought a brick the 28th of February, 2020, our relationship anniversary (observed). We'd spent 2020 wondering whether it was installed, and when we might see it. On our wedding anniversary, we did see it. We'd had a loose guide to finding it --- telling us the row and which part of the pattern it was on --- but it was one piece in a sea of bricks. And, it turns out, not a hard one to find. We were able to count the rows off from the 150 Years square at the center, and

bunny_hugger spotted it in moments.

The public address system played a set of tones we had never heard before. And a serious-sounding voice came on. The National Weather Service had issued a severe weather watch and all outdoor activities were suspended. Also, guests were advised to seek shelter. The tones, and message, repeated, and repeated again. All right, then.

We had figured to find lunch, and hoped that ``serving fries'' wouldn't count as an outdoor activity even though they're not that indoors. (And we were near the best shelter in the park.) We went to a spot near GateKeeper, hoping for cheese on a stick, that was closed as they often are. So we decided to get garlic Parmesan fries instead, from a different stand. The midway games booths staying open gave us reassurance that the food stands would stay open despite the weather. So they did, and we got great baskets of fries with a lot of sauce on top and not, we later realized, any forks or toothpicks or anything to handle them non-messily. Also it turned out the stand had cheese on a stick now and we didn't think to check.

We went into the Coliseum to sit at one of the underused picnic tables in there and found the tables were now gone. The whole space had been reconfigured. It was still an arcade, yes, but the removed pinball machines were not back or replaced with other pinball. Nor were the older mechanical coin-op attractions. Everything was video games or modern arcade-hall-attractions like small-size bowling alleys or new-model Whack-a-mole games. And they were all converted to take and pay out to debit cards, no coins. We sat at a fun-enough-looking but disconnected game called Monkey Mania to eat. And noticed the Cedar Point 150 Years drink cups had a nice pattern, a faux roller coaster track, with notable rides from its history marked off. My cup listed, for example, The Cyclone (1929) and Cedar Creek Mine Ride (1969).

bunny_hugger's listed the Dip The Dips Scenic Railway (1908) and Jumbo Jet (1972). Unfortunately the oscillating pattern for the roller coaster track meant they were visually implying, for example, that ValRavn was a decline from earlier coasters, which, fair enough but still. There's no way out of that.

We spent some while huddled up, with more people than we quite felt comfortable, at the edge of the Coliseum waiting for the weather to clear, pulling our masks up because yeah we were in a lot of open air but still ... And after a while of this ducked over to the Cedar Downs, to wait where we could sit, shaded from weather by the ride's structure.

The thunderstorm didn't last too long. And it didn't get that intense, despite the watch. The weather would drive many, many, many people out of the park. But it never got that intense. And, despite the forecast for thunderstorms all day, this was the last of the rain. The day would settle to being clear, not too muggy. Pleasant, even. What should be good riding weather.

And now pictures! I'm already falling behind the narrative but what can you do? Share twelve pictures in one day? That would be way too much. 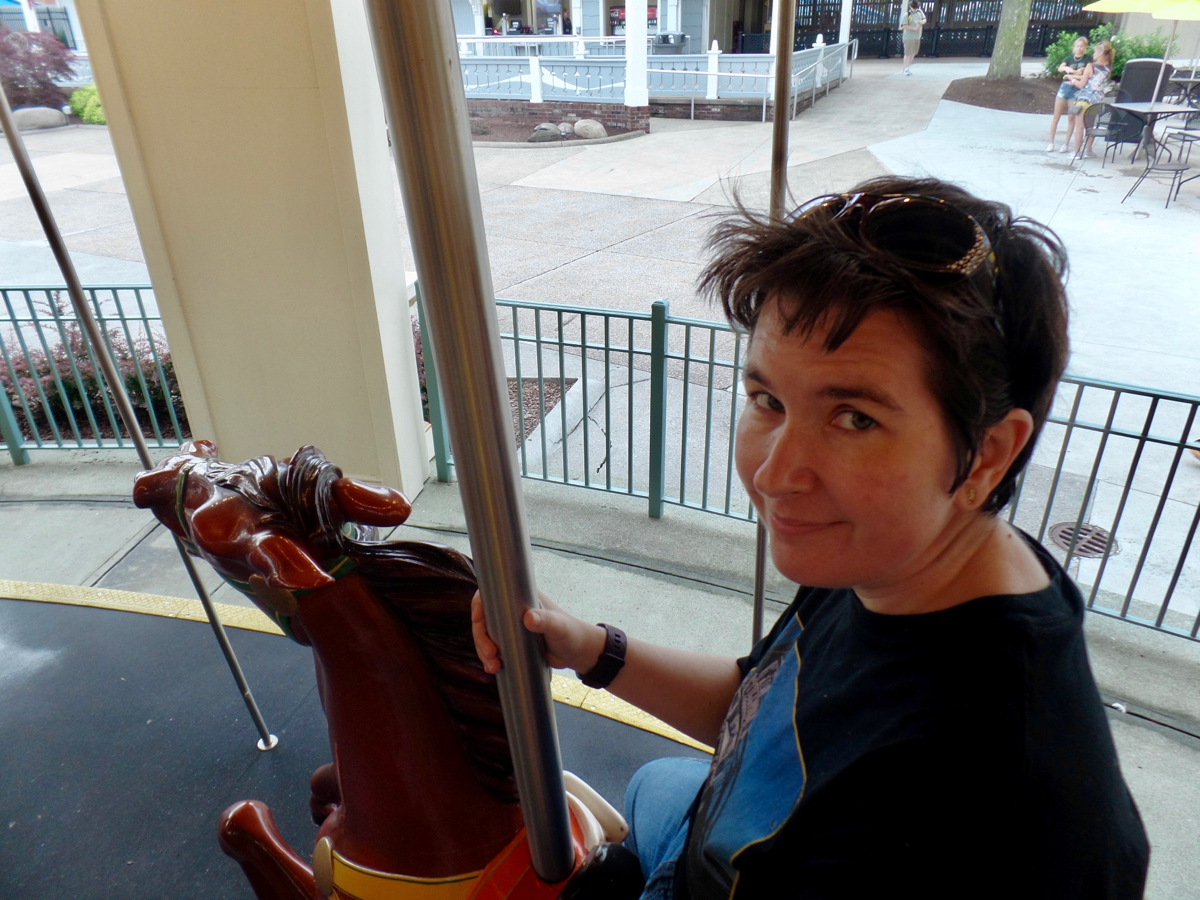 Our first ride in twenty months!

bunny_hugger on the Midway Carousel, on the first horse we could come to that didn't have someone on it. Sad to say the park hadn't repaired the band organ and was still playing the one CD of music they've had for a decade-plus. 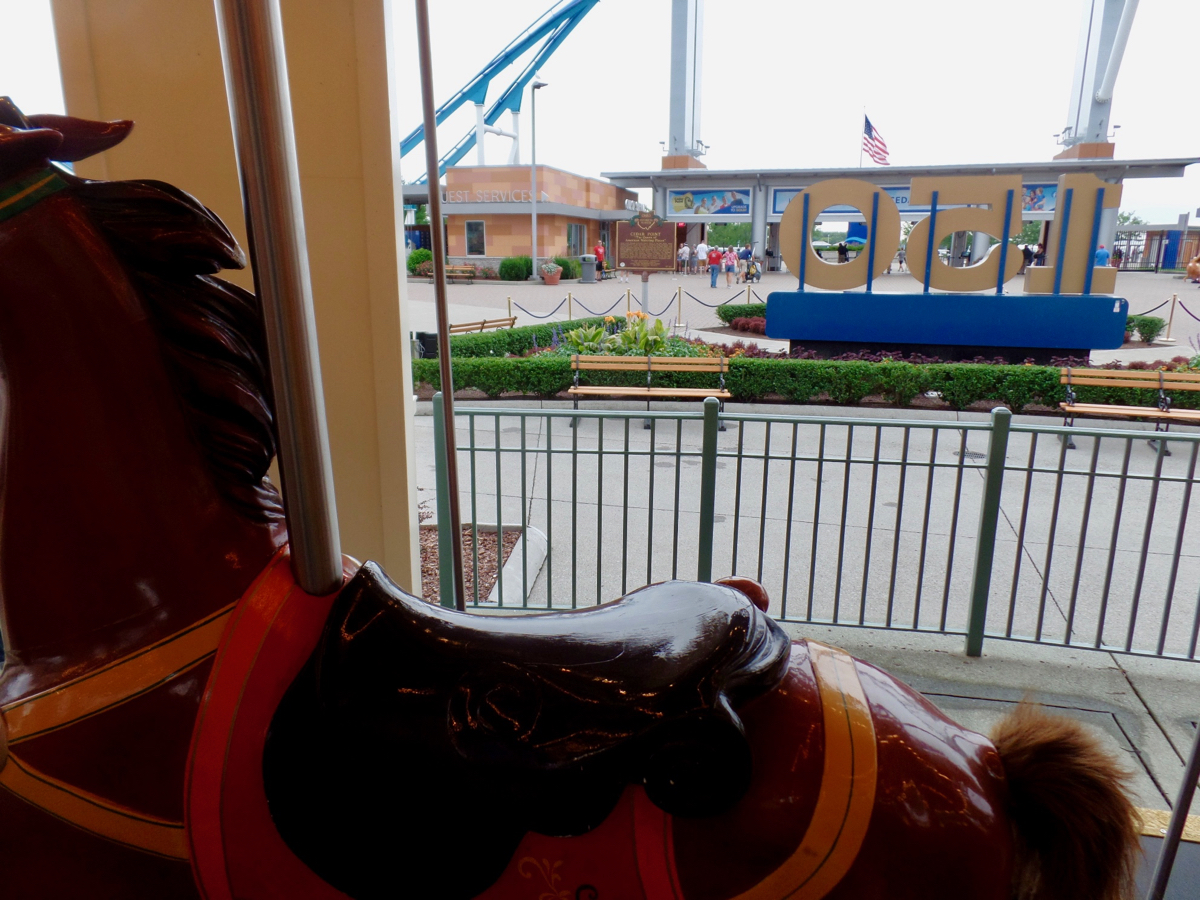 Looking out at the 150 sign, and the entrance, from on the Midway Carousel. 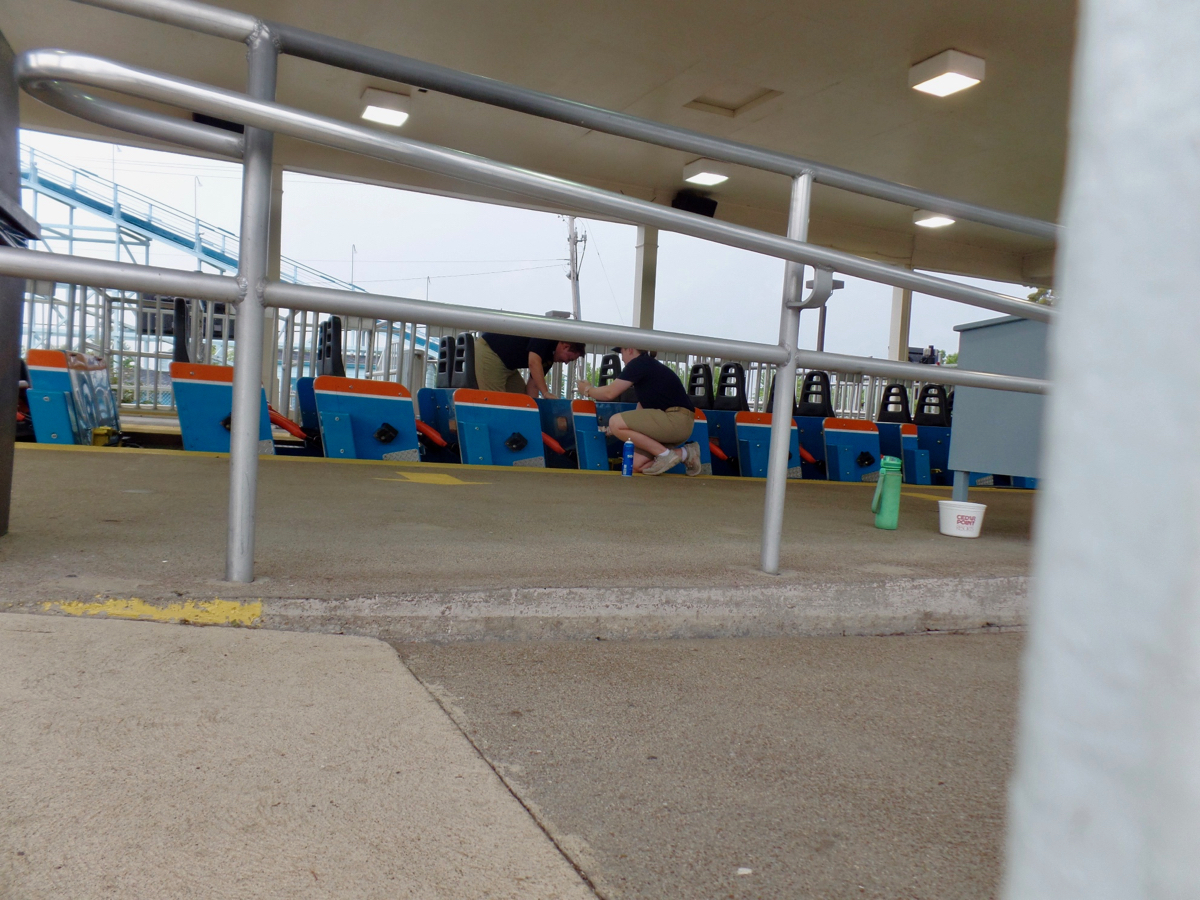 Our second ride! We had hoped. But Blue Streak wasn't running just yet, although the sight of people washing it brought us hope. You can maybe make out that the white Cedar Point bucket there uses the park's 1980s-90s logo. 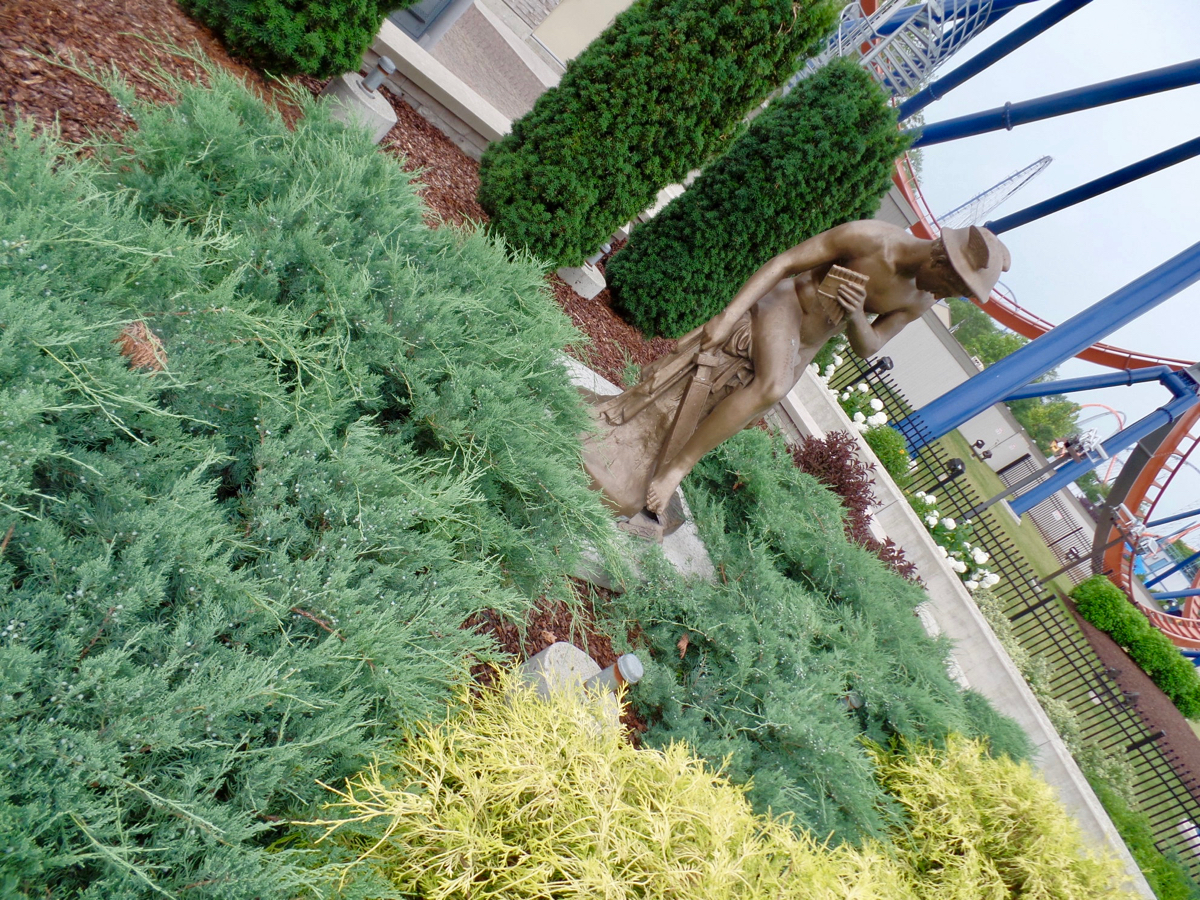 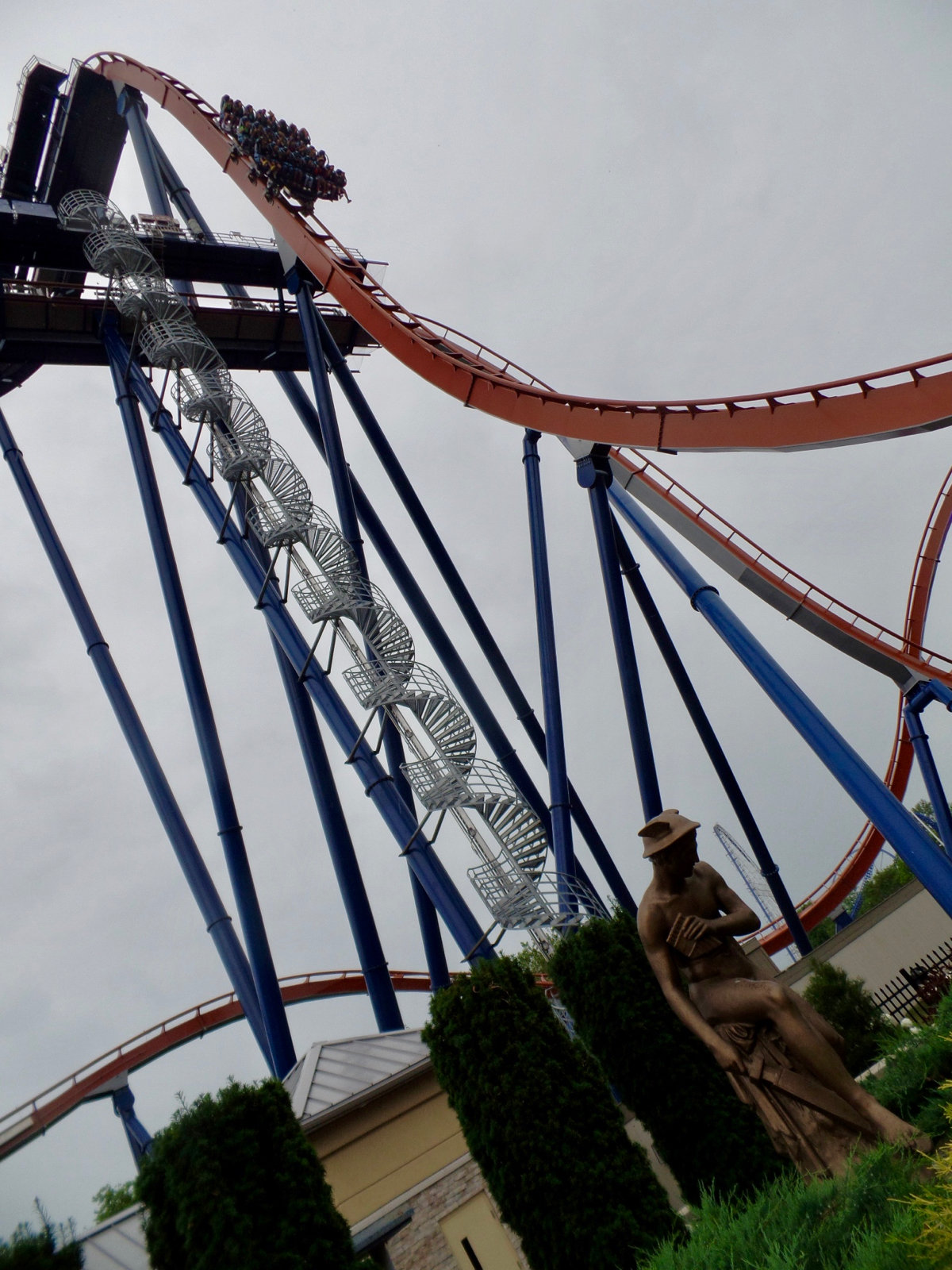 Mercury drawing his sword to do some sword work while, above, ValRavn dangles, ready to drop. 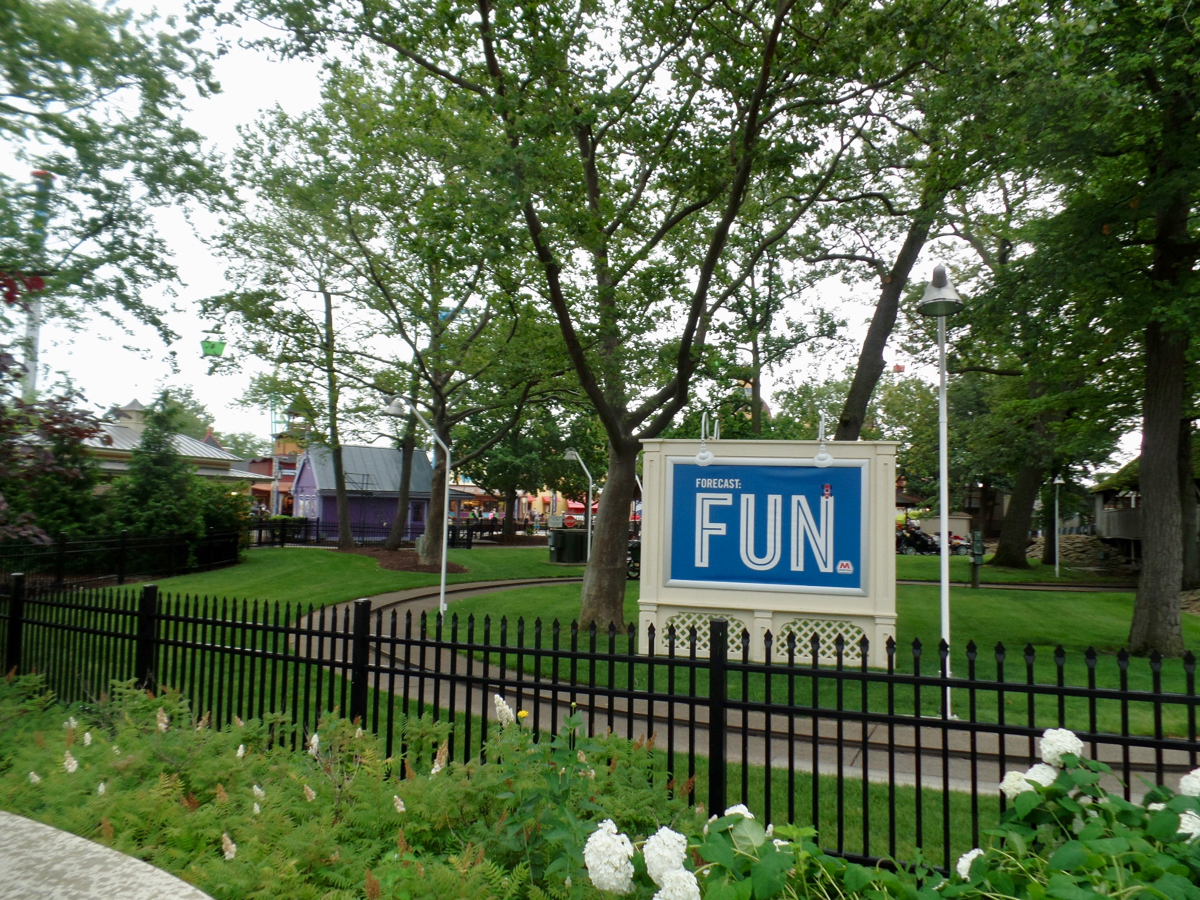 A rather optimistic sign forecasting Fun on the Cadillac Cars ride because the weather forecast was for scattered thunderstorms all day.

Trivia: In January 1939, the same week that Enrico Fermi's first nuclear fission experiment at Columbia university succeeded, Fred Allen did a mock interview with Dr Gafney Flubb on atom-smashing. One of Flubb's lines explained the work was practical as ``you never know when someone may come in and want half an atom''. Source: Fred Allen: His Life And Wit, Robert Taylor.

Currently Reading: DC Showcase presents Superman Family, Editors Mort Weisinger, Robert Greenberger. Also, you know, a lot of people having to make some ha-ha zany wild guess as to Superman's secret identity hit on ``Clark Kent''. I get that you don't want to abandon a gag that good just because you used it once but when you see it several times in short order you start to wonder how much of the ``secret identity'' stuff is just everyone humoring Kal-El. I mean, like, the point of the secret identity is to keep evildoers from being able to harass Superman's family and friends, so how does that square with how everyone knows Jimmy Olsen is Superman's pal? I shudder to suggest but it's possible that DC Comics of the 1950s had deep flaws in their story logic. And then there's the one where characters conspire to make Jimmy Olsen think he's a were-pirate.