We had a couple false starts getting onto Cedar Downs, when rides opened up again. For a while we were standing in the queue watching kids run around and around a turnstile that leads into the last part of the queue. They finally opened up, though, and we got on for our second ride of the day. It also started slowly because a woman several horses ahead failed to understand that the repeated declarations that the ride would not start until everyone put away their cell phones meant that the ride would not start until she put away her cell phone. I understand thinking that sitting rides are safe ones and yeah, I'll photograph like mad from a train ride or sky chair or something but Cedar Downs is an actual fast carousel. It's no Rye Playland racing carousel, but it's still the fastest carousel in the state.

Still. Fine ride, and after that we found that the Kiddie Kingdom Carousel was running again. There were only a couple people in line ahead of us and yes, of course they ran right to the black-and-white rabbit

Something Cedar Point added ... this year, or last, it all blends together ... is collectible and tradable pins. Yes, it's an idea swiped from Disney Parks, much as their previous CEO was. It's still a solid idea. They had a nice booth with lanyards and sets of pins to buy, and we figured to get back before the booth closed at 10 pm. The booth closed well before 10 pm. We hope to get back. They've got charming sets of pins, including ones of vintage Cedar Point logos, old ride logos and adverts, cartoons, even illustrations of old ride minimum-height signs. Even one with the not-used ``Banshee'' name and logo for what became the Mantis roller coaster. (Story goes they announced the ride would be called Banshee, then someone looked up what a Banshee was and they decided an eternally weeping portent of death wasn't the kind of fun they were looking for. Years later, they used the name fr a roller coaster at another park anyway.) So you can see where that's well-aimed at us.

We did not go the day without getting some pins, though! They also had a stand offering free pins, large buttons reading 'Cedar Point 150 Years' and a my-name-is type slot to fill in 'I've Been Visiting Cedar Point Since ... '

bunny_hugger wrote in 1980 and spent the day side-eyeing other people, looking to find a date earlier than hers. And admitting she couldn't positively swear to visiting in 1980 but she believed she had.

Though the storm had passed the park was still slow getting things up and running again. Blue Streak wasn't running yet. In thinking of a suitable First Coaster In Forever,

bunny_hugger came to Iron Dragon. Which was also not running although it looked like the crew was getting ready to do test runs. Also in front of Iron Dragon was a happy surprise: the gryphon had returned! Back before 2012 and the construction of GateKeeper, Iron Dragon's entrance was guarded by a gryphon statue. It disappeared and everyone assumed that GateKeeper, which has a gryphon logo, would be its new home. But the statue never made it there. It was painted gold, matching GateKeeper. And it spent time in the Town Hall Museum. But now it's returned to Iron Dragon, golden-painted, with its nearly decade-long sojourn unexplained.

Rougarou (née Mantis) was running, but who wants that to be your first coaster of the year? Millennium Force was not running, but a long queue of hopeful people had formed outside its gate. We walked up the Frontier Trail and discovered, happily, that the China Shop --- last relic of the old days where independent vendors had storefronts in the park --- was still there, and still selling. We did not see the elderly German woman who runs the shop; someone else was there. But we also didn't see any memorial to her so our hopes are that she's survived a terrible 20 months and will see her again.

Less happy is that while the Candle Shop is still there, it's in the truncated form and space we'd seen in 2019. They still have candles you can dip, but the vast array of shaped candles are gone and, we imagine, not to return.

The point of walking this way was to get to Gemini, the racing coasters. On the way, we saw Cedar Creek Mine Ride was open, with a sign promising an implausibly long 30-minute wait. Mine Rides are a classic old style of roller coaster --- and this was made by Arrow, just as our previous roller coaster Vortex was --- and that's a good fitting end to our coaster drought.

So it turns out we were wrong about the wait time. It was maybe even longer than a half-hour. The obvious problem: they were running only one train! The unobvious problem: why were they running only one train? The Mine Ride was designed to run five trains at once, and routinely operates two, sometimes three. It's possible that with the track being wet they didn't want to run two trains at once, lest a braking error allow a collision. Which seems improbable, but it turns out that Shivering Timbers, at sister park Michigan's Adventure, had trains collide just the week before. It's almost certainly not the same braking system, but I could understand the park chain taking a very strict policy if there were the slightest doubts.

Also plausibly the problem: staffing. Cedar Point has had a terrible time getting people this year. Possibly people don't want jobs where you have to face the public aware that so many of the public want them to get sick and die. But also because many of their staff are young adults from overseas, enjoying a summer in America working at a prestigious theme park, and that's really hard to fill these days. There were roller coasters we never saw operating, including high-capacity crowd-pleasers like GateKeeper and it's hard to think why they would unless they didn't have the people for that. We saw Gemini running later, both the red and the blue tracks, and two trains on each track too. (Which challenges the ``they don't trust the brakes'' hypothesis.) But the red train sent out nothing but empty cars, over and over, even though they had what looked like a full crew working that side. This makes sense if they had crews which needed hours of rehearsal time, but that is just our guess.

It was slow getting there. But it had many happy outcomes. One is riding a roller coaster again. Another is learning how the 20 pounds I'd lost during lockdown made the ride a more comfortable fit. And the slight improvements Cedar Point had made to the ride for its 50th anniversary in 2019 --- mostly a couple animatronics added to the return leg of the track --- were still working! Even heard a couple people delighted to see a prospector type turning to them.

So does life return to something like normal. We used squirts of hand sanitizer from the exit gates as we left the ride.

Now to the photos, already falling behind the main text here. 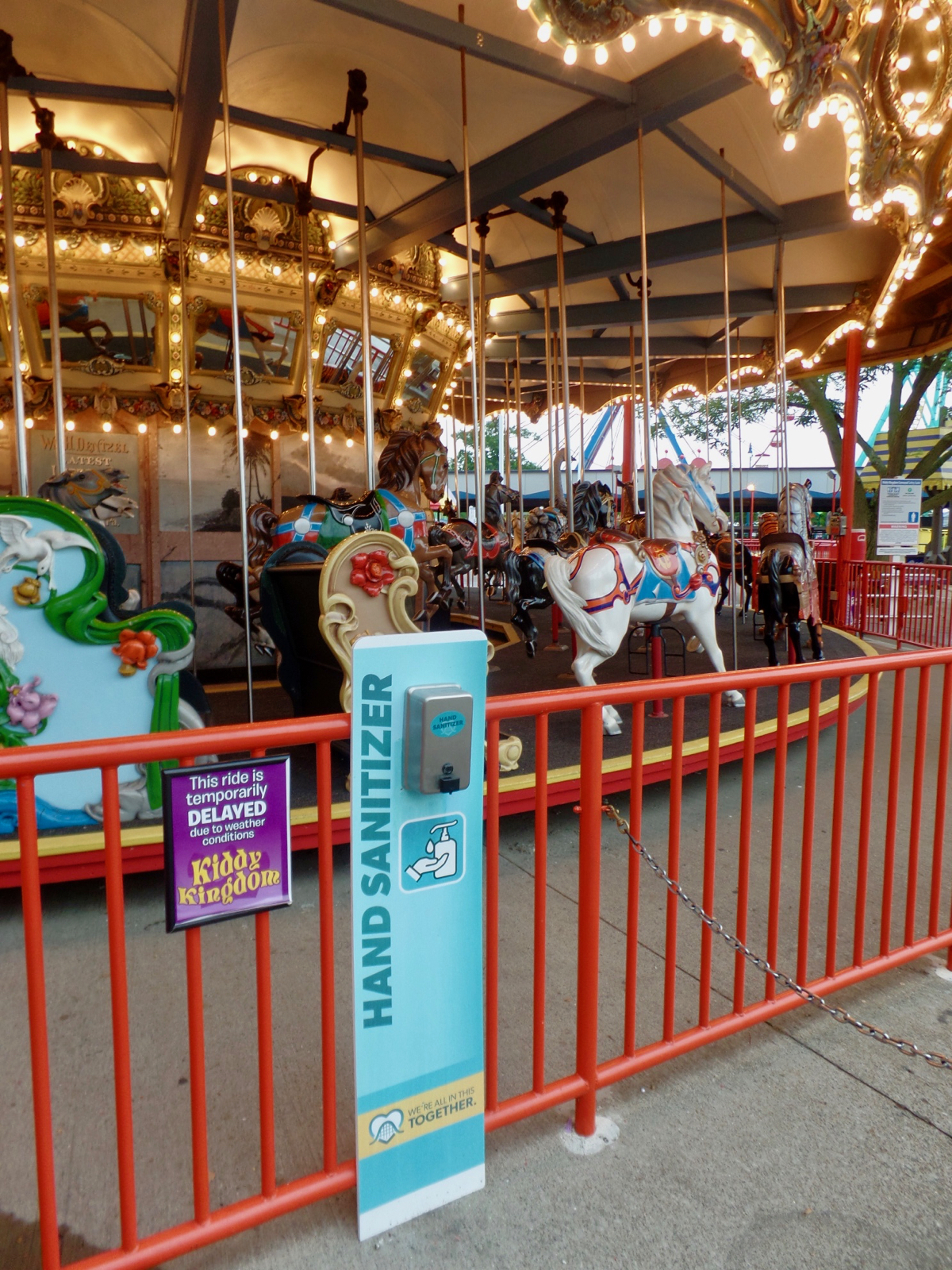 Strange times. Hand sanitizer station next to the Kiddie Kingdom Carousel. Also, the sign warning the ride is delayed ``due to weather conditions''. 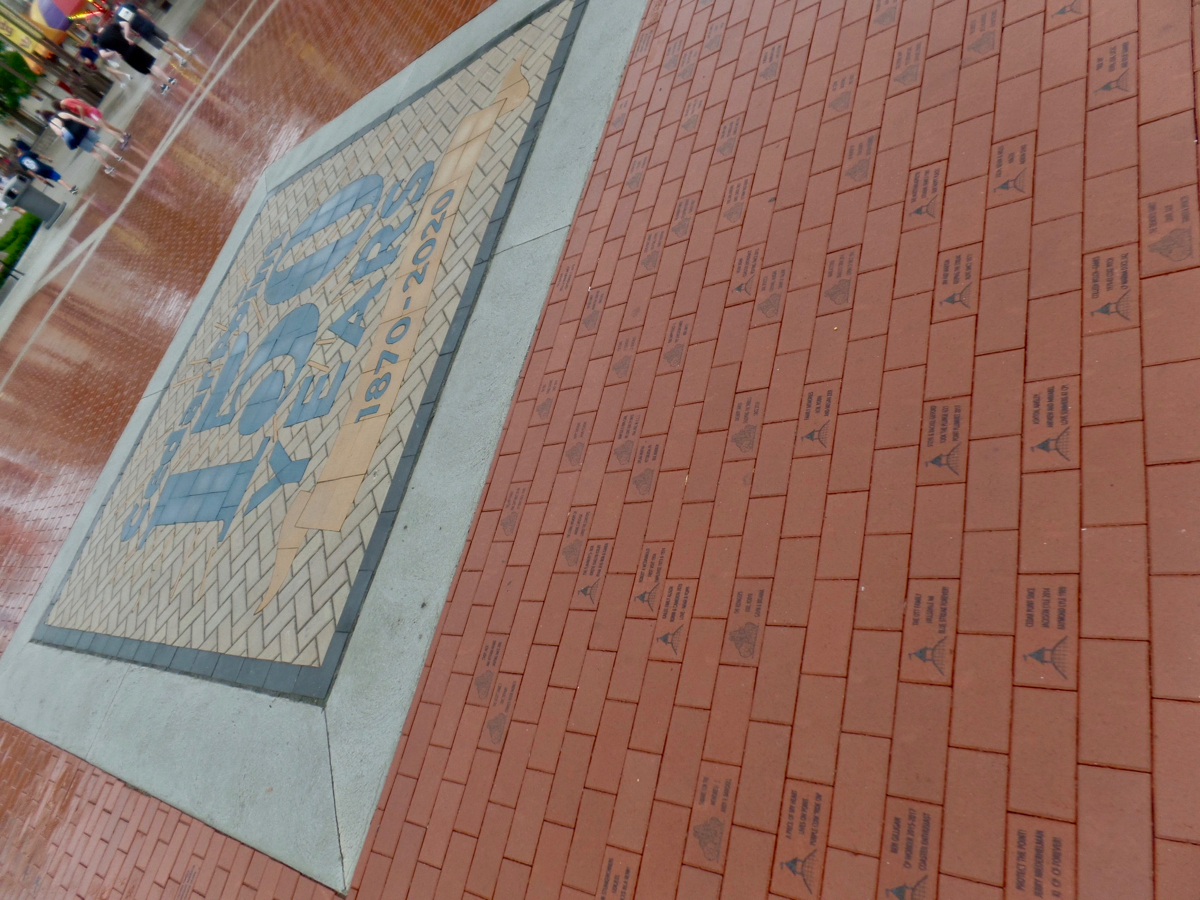 Cedar Point's 150 Years square, with bricks paid for by people like us all around it. 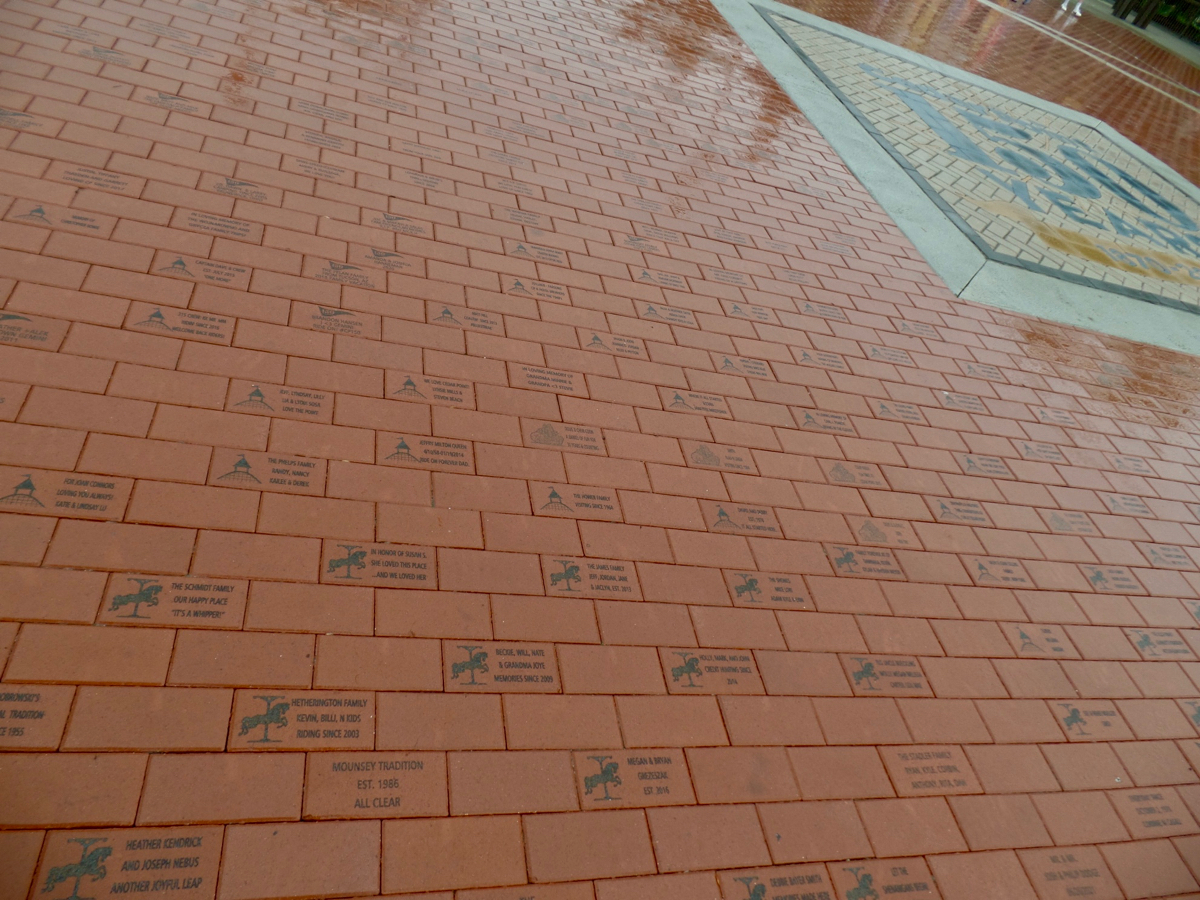 And there's our brick! Do you see it? It's got the carousel figure on it. 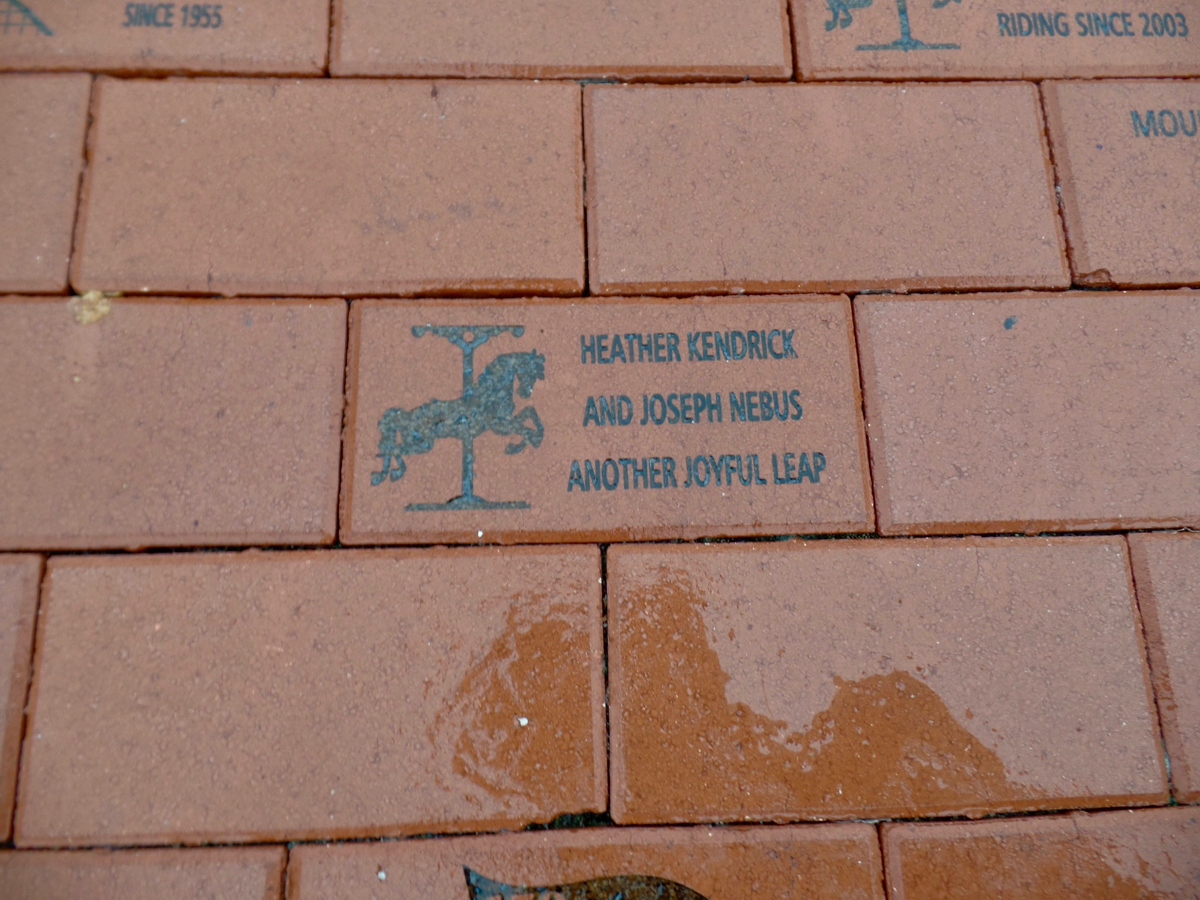 All right, maybe this will make it easier for you. Note the weather conditions on the bricks. 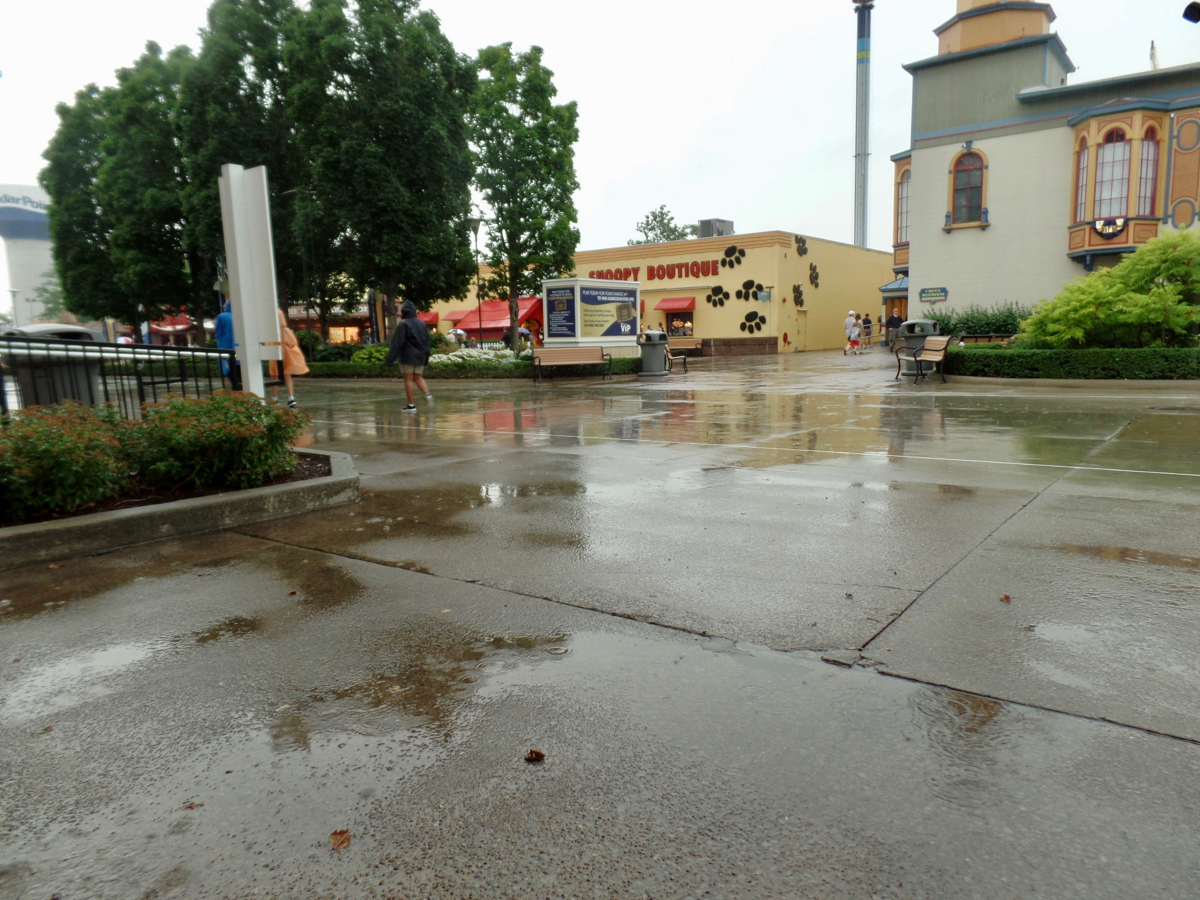 Looking out at the Snoopy Boutique and the far end of the Coliseum in the weather conditions, from our perch at Cedar Downs. 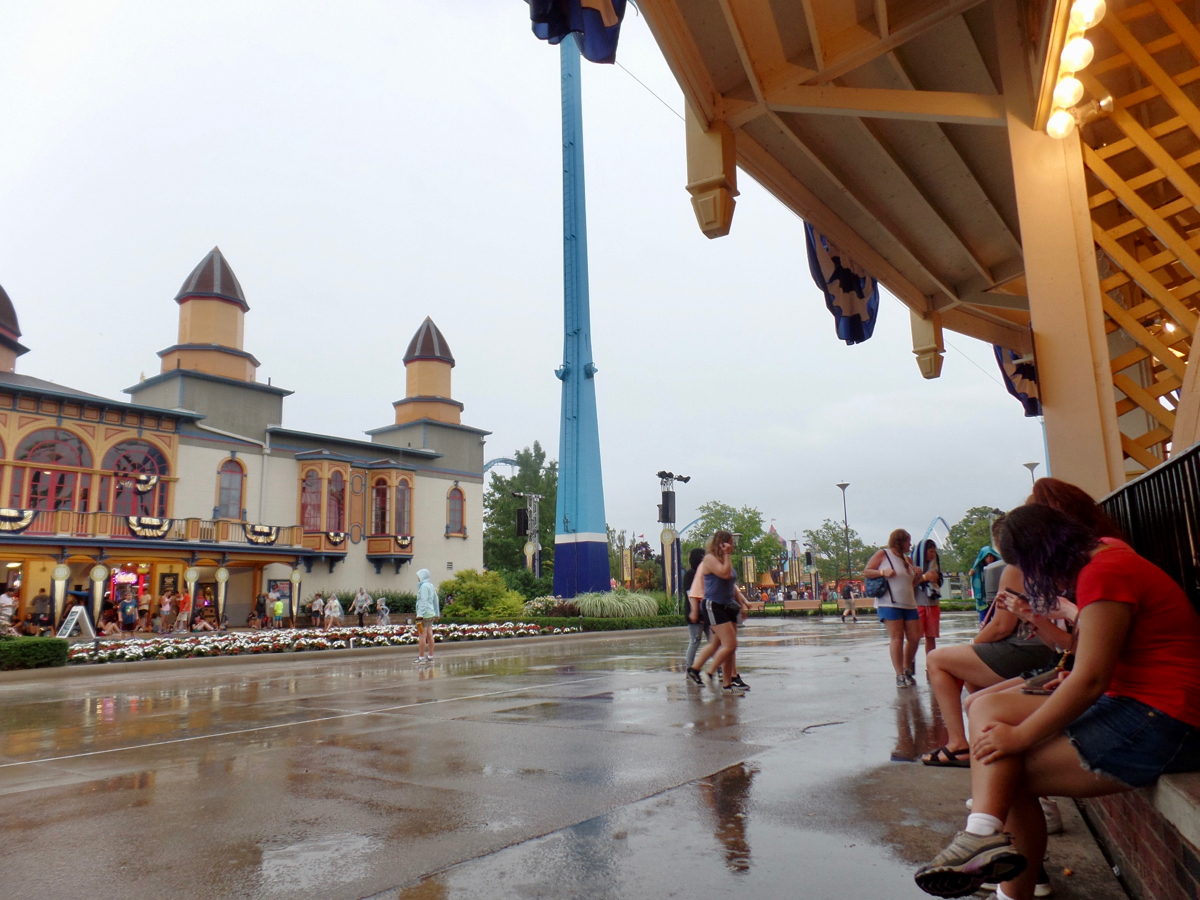 And that's looking up the midway, with the other end of the Coliseum. Some people were jumping in the puddles, which wasn't a bad thought.

Trivia: The Portuguese, under Henry the Navigator, planted the first sugar cane in Madeira around 1435, with a steady supply of sugar from the island reaching Portugal by the 1450s. Source: Sweets: A History of Temptation, Tim Richardson.

PS: Is this mathematics thing ambiguous or confusing? which points out a wiki that you might find fun.