Another step in our fitful normalishness: the 4th of July. Or the 3rd, properly, when we went to

bunny_hugger's parents. Their town was having fireworks again, again on the 4th of July Eve. We made a day of it, of course. The centerpiece was going out to grill burgers. Her parents had ground down the broad tree stump which had been a great ad hoc table, one that we could set the tiny portable grill on and have it be safe from the dogs. Now they had to set their grill on the ground. This would make it vulnerable to dogs yoinking (veggie) burgers, except that please remember one of their dogs is afraid the chips bowl that's too large. The dogs seemed content to avoid this whole alarming thing even if it clearly held food. I, meanwhile, ate enough to feel bloated, a rare experience now that I'm not a grad student who figures how a Chinese buffet lunch could replace two, three, maybe four meals.

The stump, by the way, they had ground up into mulch, lots and lots of much. They gave us four bags full, which we set into the back of my car even though it was midday. This has given my car a chipped-pine scent that will wear off I hope never. We've still got several bags mostly full in the garage, which again, has this great scent now. Really hoping that sticks around.

As for the show ... well, it wasn't our first big public gathering, since we'd been to Cedar Point. It was the first where we were expected to sit still for an extended time, regardless of how big the crowd was. As it happens I would swear the crowd was smaller than usual. We didn't have to park as far from the viewing spot, for example. (Also, at the viewing spot, the small dock used to launch canoes or other small boats was gone, but we're pretty sure we could work out where it was. The spot attracted kids, just like the dock used to attract kids.) It wasn't nearly as long getting out, either, although

bunny_hugger and her father attributed that to someone letting us into traffic sooner. No matter; I still took dozens of photographs even though I know photographs of fireworks always disappoint.

Back at her parents' home we had personal fireworks too. Her father had gotten something like a dozen major things. (We'd brought none of our own.) So they were, including one fountain that seemed to be aiming balls of fire personally at

bunny_hugger's mother. Also alarming: some enormous bug, a good three inches maybe from pincer to tail, that didn't know what to make of these fountains of light in the driveway but did know it wanted to be near them. In-between fireworks we got a sheet of cardboard, scooped it up, and dropped it behind a fence where it could avoid temptation. Debate about what exactly we saw continues to this day. The only known photographs are more blurry than we would like.

The 4th proper we often go to the Lansing Lugnuts ball game and watch the fireworks from there. We weren't quite up to that just yet, though. We had heard that we could see the city fireworks well enough from Marshall Park, near the Armory, though. And that's such a short walking distance from home it barely registers as a walk anymore. We went out after dinner and it was hard to tell what direction the city fireworks even were. Michigan has gone firework-mad of late, and while last year was an understandable crazy high point for private fireworks, this year was also pretty big. But when we got to the vicinity of the park there were fireworks going off in every direction. Some personal fireworks, including from a battery of people who'd set up at the Armory parking lot or the adjacent school lawns. Some that looked like they were maybe the Lugnuts' fireworks? Some that are maybe adjacent towns? It's really hard to be sure.

We did get to the well-spaced crowd in the park, though, and watched a show that went on maybe 45 minutes, if we were looking at a single show. This compared to the usual 20-30 minutes, as though they had just rolled over last year's budget. We had the tree line fighting us a bit, yes. But it was a great spot to see most of the fireworks, and it's hard to beat the location, or just another cool, pleasant early-summer evening out ... not having to worry about things.

And now to the distant past of ... the end of June, and Cedar Point. Enjoy; you're going to get so many fireworks pictures soon enough! 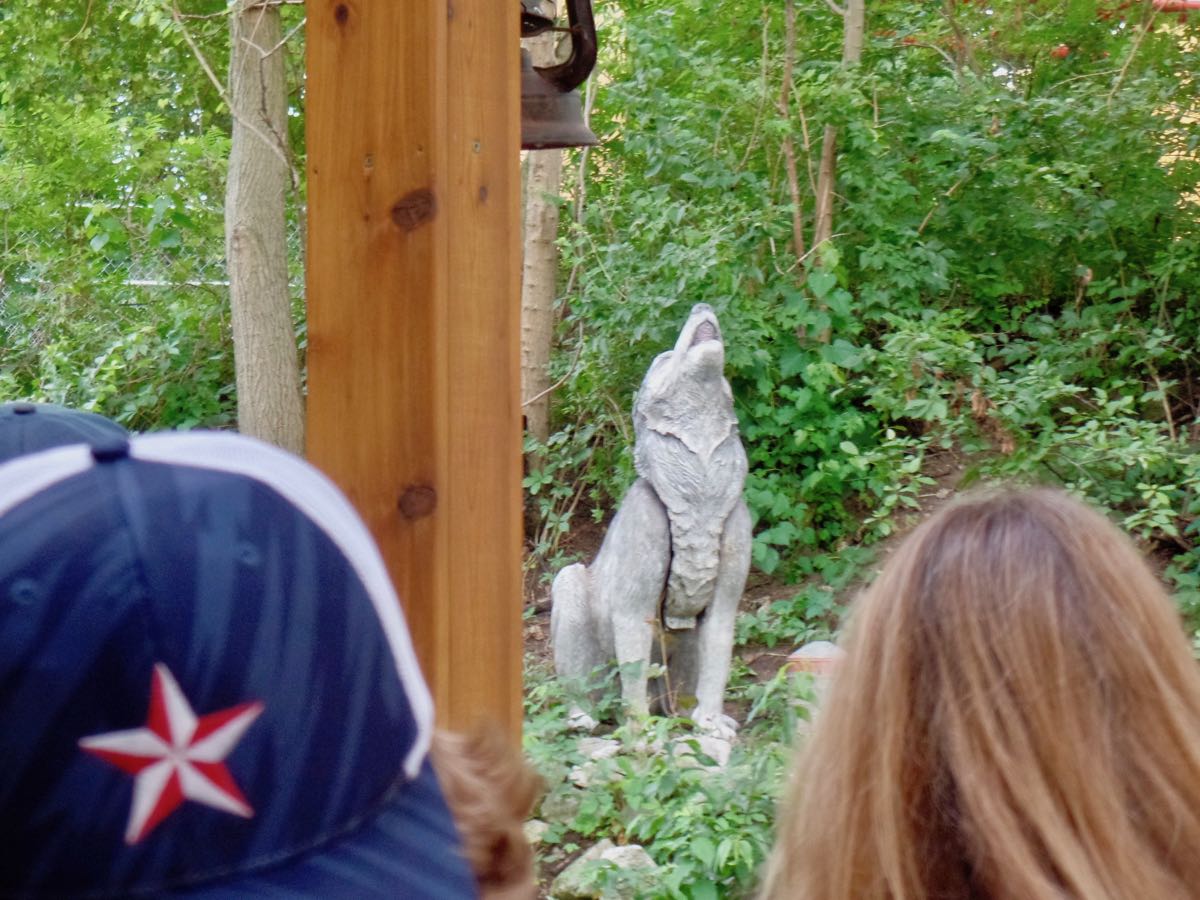 Animatronic wolf doing a howl along the Snake River bank. 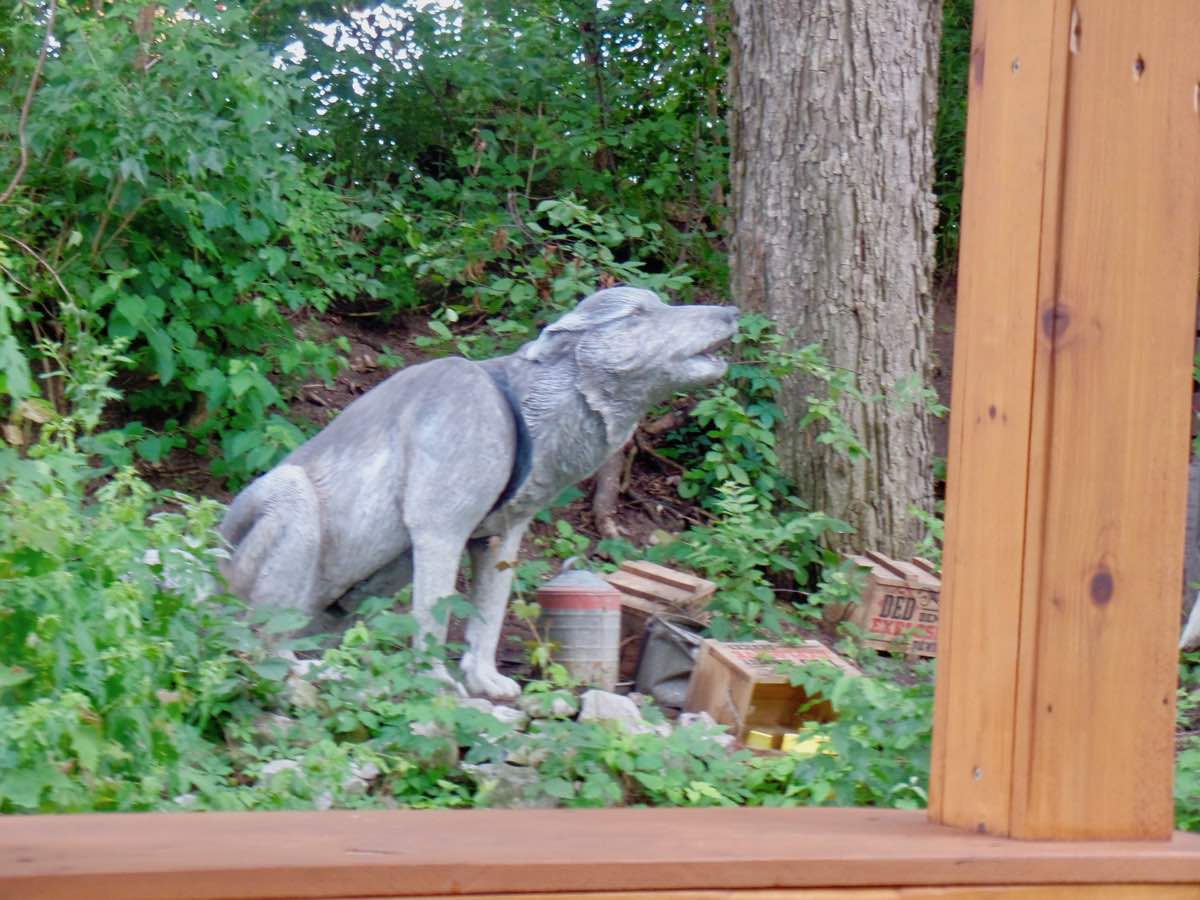 And a different wolf who's no less concerned. 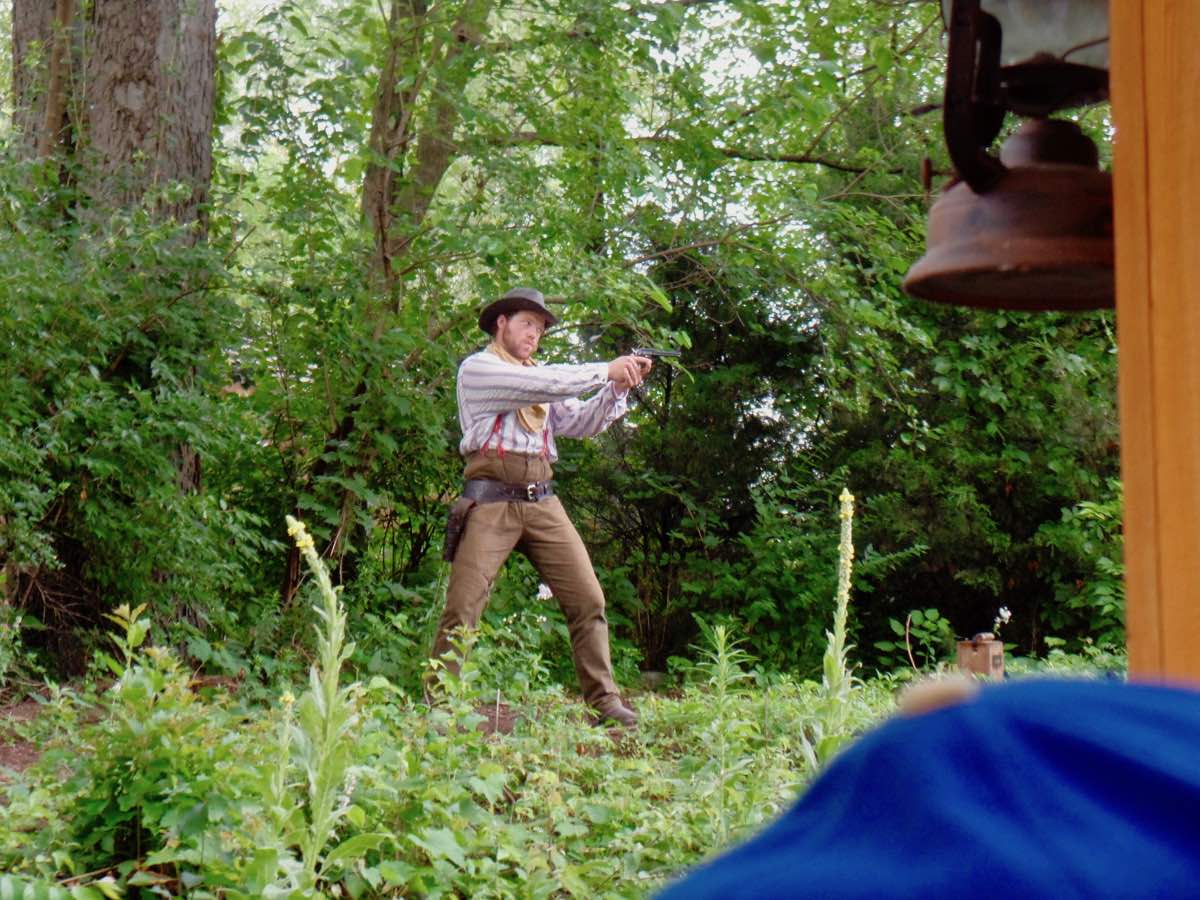 Our hero! Maybe! Is he going to get the robber to return the smugglers' gold? Or possibly dynamite? 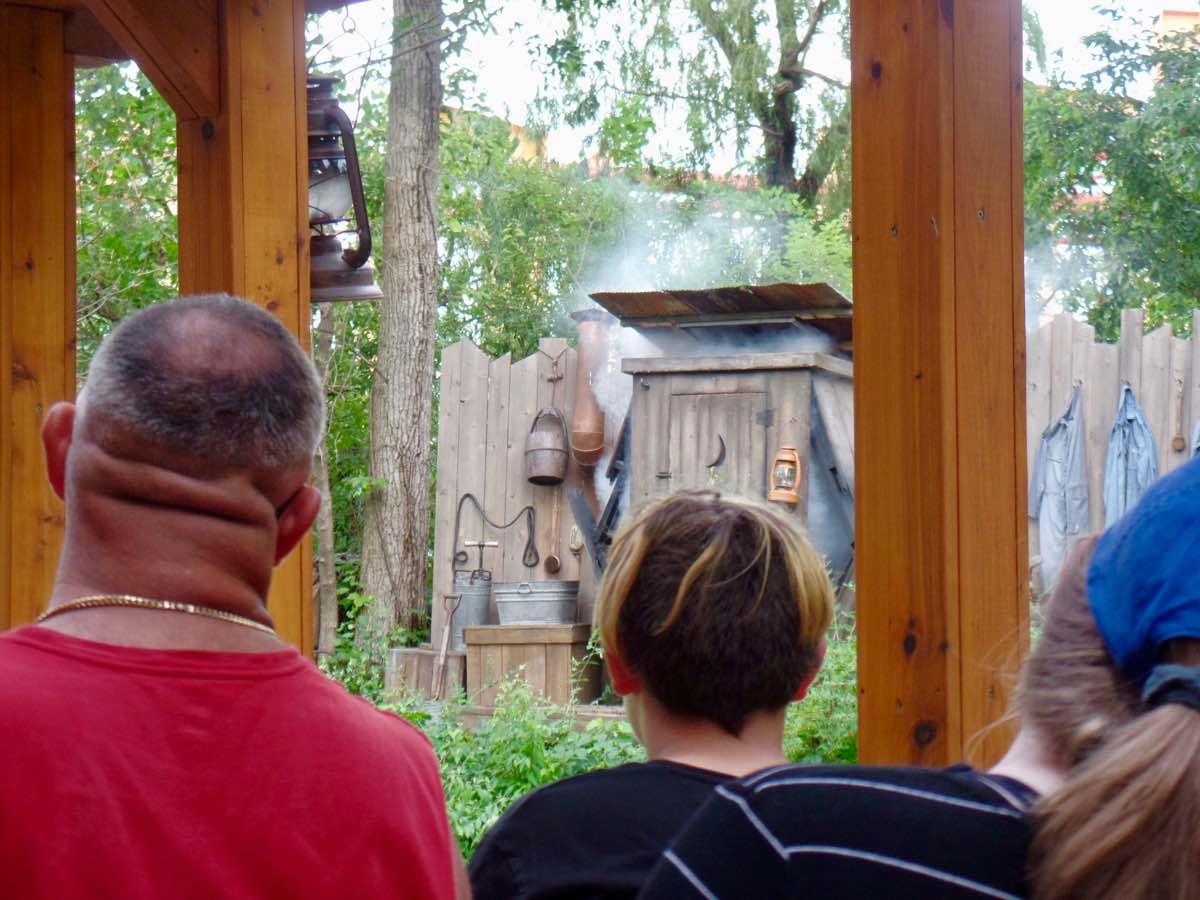 Oh, no, now it's used dynamite! The end of the smuggling capers. 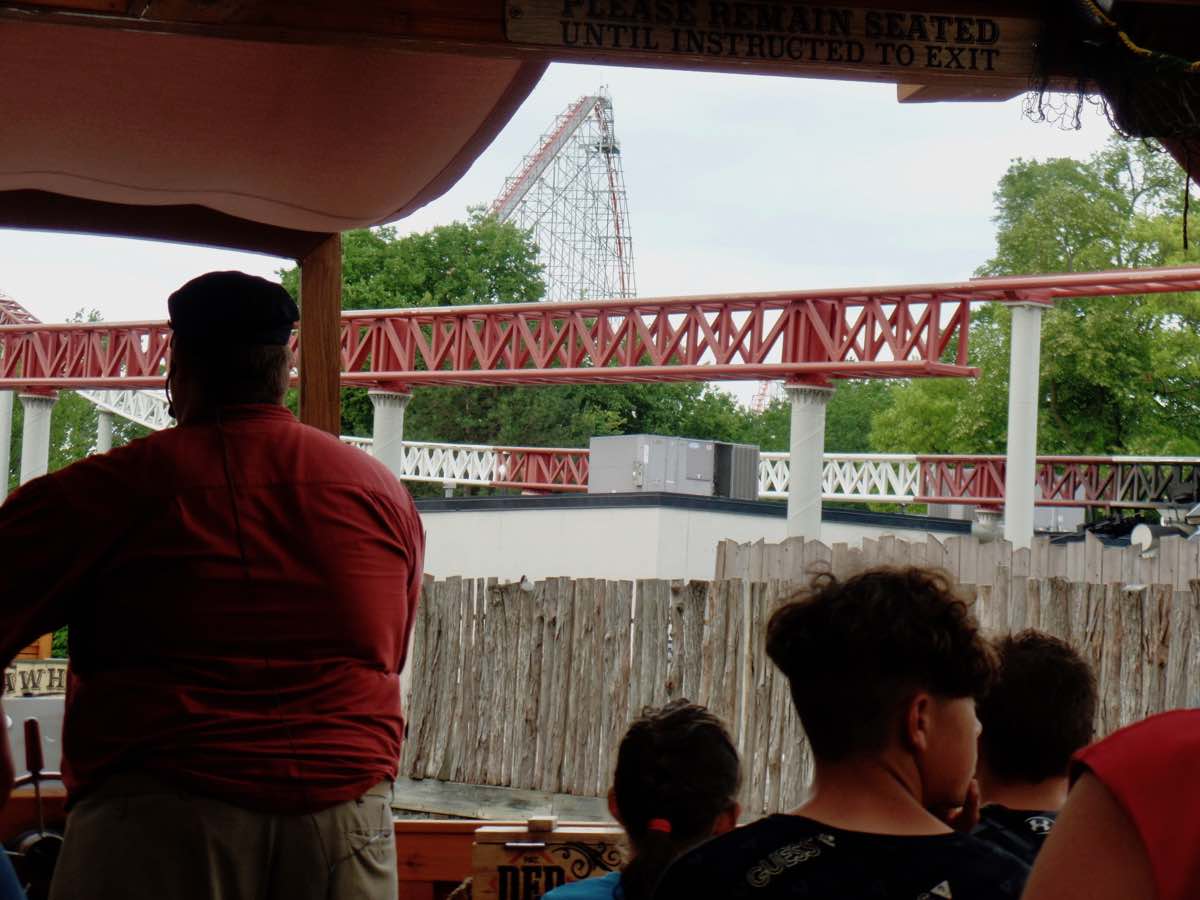 The old-time setting's a little impaired by going past Top Thrill Dragster (the horizontal tracks in front) and Magnum XL200 (the large lift hill in the distance). 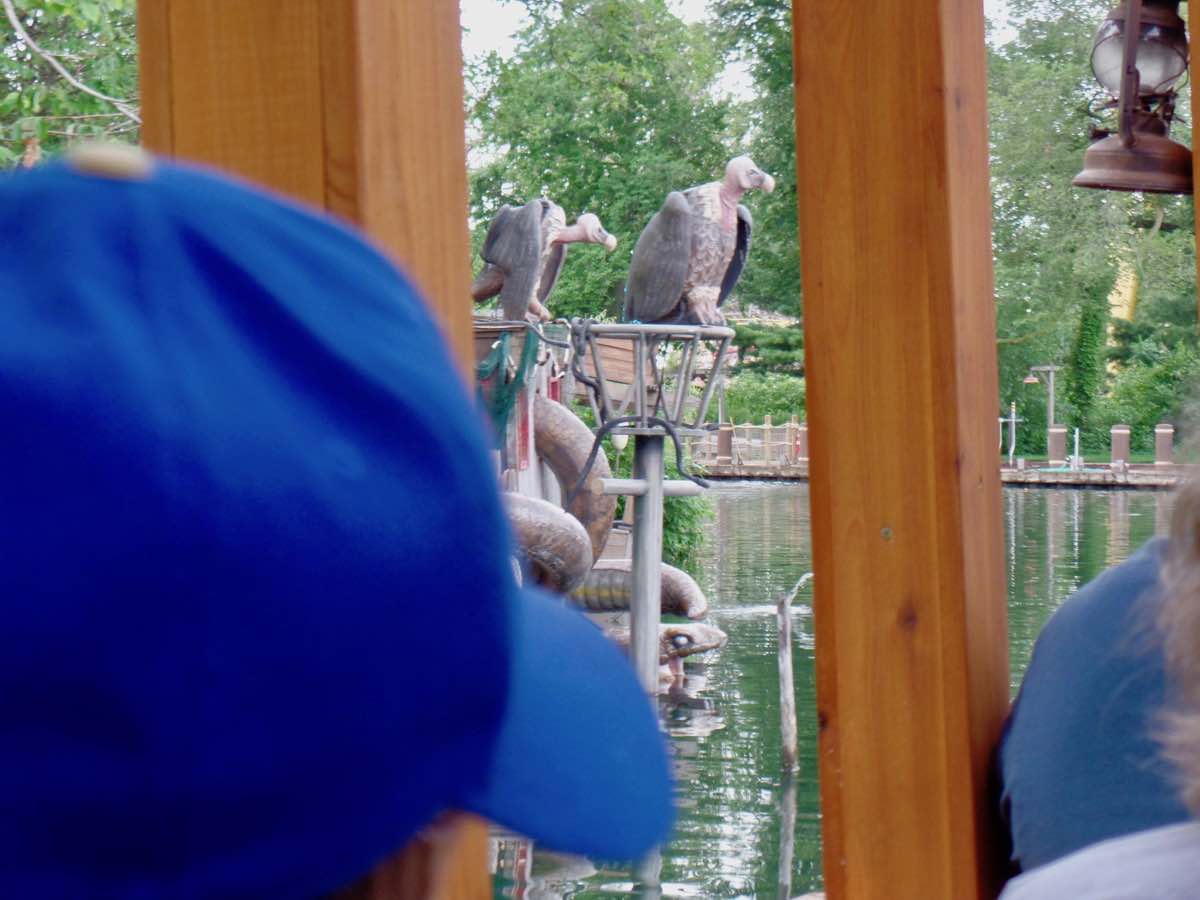 Some vultures hanging out on the crow's nests of a sunken ship. What might this be about?

Currently Reading: Lost Popeye, Volume 5: The Roving Champion In The Land of the Jeeps. Tom Sims, Bela Zaboly. Editor Stephanie Noell. OK, so Sims hit an awesome plot by having Popeye negotiate a huge payout for his Children's Spinach Fund by fighting the champion of Jeep Island. But on the way there he learns the gate price is one Jeep skin (two, if you want a seat from which you can see the fight) and he seizes up with righteous moral indignation at harvesting Jeep skins. Suddenly this was an awesome story ... and then next strip Wimpy reveals ``Jeep skin'' is just slang for a dollar and it's no more taken from a Jeep than a ``buck'' is taken from a deer. You rarely see a story work that hard to avoid such an interesting twist.