So now the home-repair story of the year. A couple years back the motor in our bathroom ceiling vent went. So we stopped using it and accepted that in the seasons when we couldn't leave the bathroom window open we'd get a hot, swampy mess in our bathroom. This because I can't take a shower under 85 minutes in length. But we always felt, you know, someday we should replace it. Or get it replaced. Or deal with it later since after all, we normally just run the fan a couple minutes and what's the difference between running the fan for 15 minutes and for zero minutes?

A few months ago we looked at a replacement fixture and couldn't find one the same size as what we had. And, for that matter, we weren't sure exactly how big the hole in the ceiling was to know how to replace it.

bunny_hugger finally found that the successor company to Nu-Tone, our fan maker, no longer sells the motor for our fan. But she was able to find a replacement motor and fan assembly that people found worked for us, and got that. And she found a couple videos on how to remove the old and replace it with a new. And then left it to wait because, hey, why not put this off a little longer?

bunny_hugger was working at the bookstore she sometimes does. And I didn't have much work for actual work to work on. And I felt good about the videos. So ... why not try it? As the famous last words have it, what could go wrong?

It turns out, nothing went wrong. The ceiling fan cover came off easily. I needed to nudge the casing a bit to break the paint that welded it to the ceiling, but that's all. And I took the chance to set it in the bathtub and wash ancient dust from the vents there. The old motor itself was encrusted in so much dirt it's plausible that its only trouble was that it needed cleaning, but I haven't tested that. In the event, the old motor had exactly the same bracket that the new one has. It slid back in and screwed into place in less time than it took to watch either video. Even adding in the time to go to the basement and flip the circuit breaker switches, it was a fast job.

I left it as a surprise for the next morning, leaving the ceiling fan running after my shower for

bunny_hugger to discover. And she did, and was happy that it worked and surprised that I did so much work without telling her. Really we were fortunate. This was a bit more work than changing a light bulb, but not too much. Maybe as difficult as changing a car's battery. Having to do it overhead was a small complication and I was terrified I'd drop a screw into the toilet even though the lid was closed. But, like I say, nothing bad happened at all.

Also maybe I'm imagining but I really feel like the ceiling fan draws so much warm out out that it helps cool the house. But we'll know better come the next heat wave.

Here's just a couple pictures from walking around town. I haven't been walking around much the last two weeks as I've had a sore spot in my foot I figure needs rest more than exercise. So I haven't got updates on the bridge replacement, for example, and I'm sure to regret that. But not as much as I'd regret an aggravated foot. 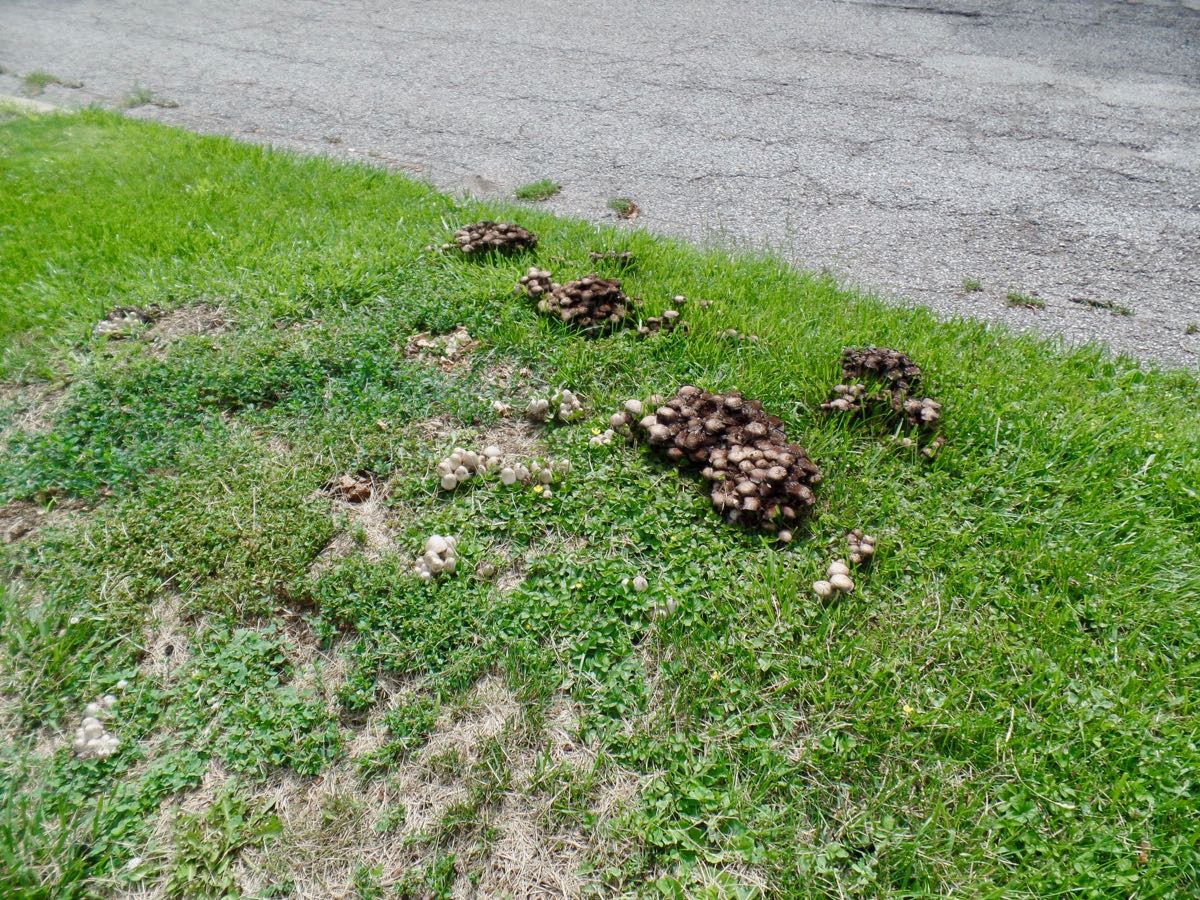 A great whomping mass of mushrooms formed on one of the lawn extensions down the block a little. 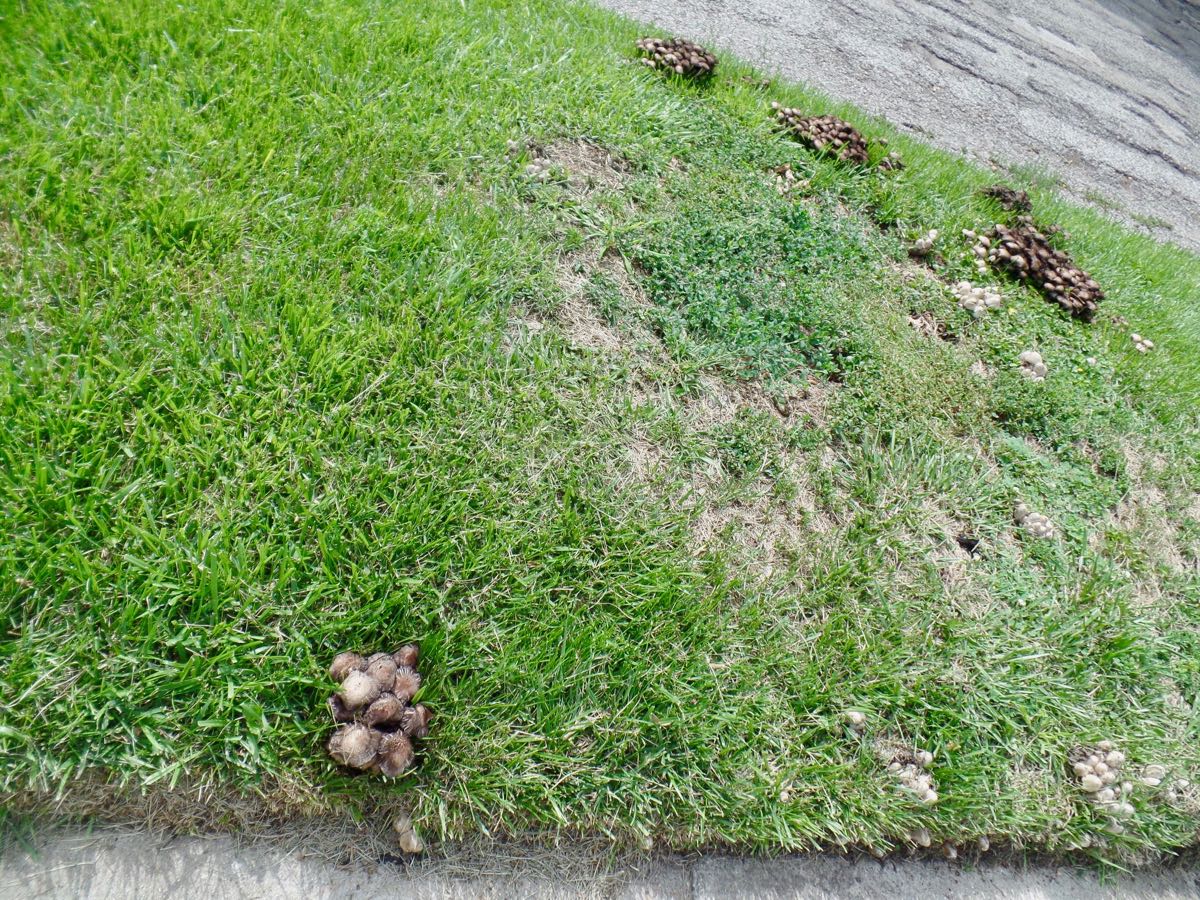 Some more of the mushrooms gathered there. The impression I had from

bunny_hugger is that this isn't even what they were at their peak. No idea what was going on but we have to suppose it's the fae folk, of course. 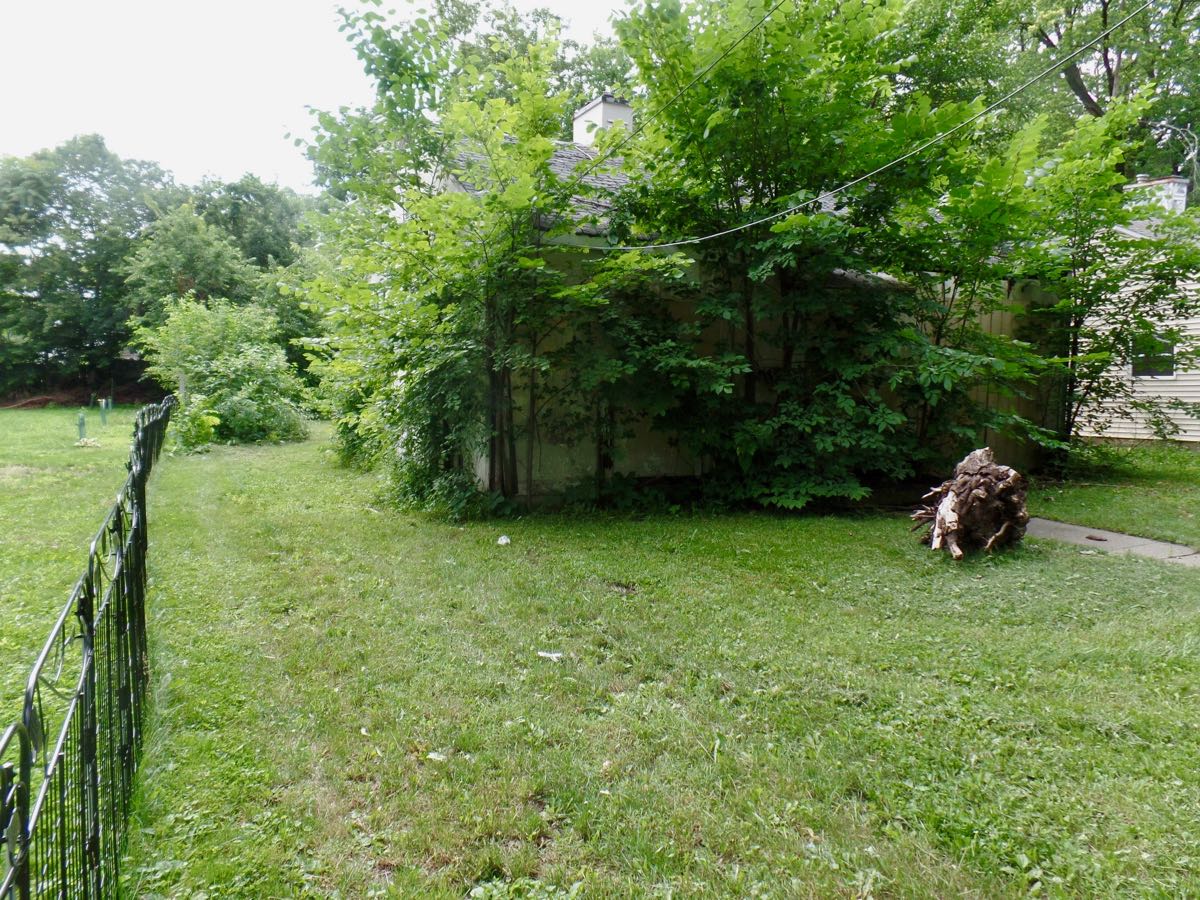 House that's gone and camouflaged itself so well even the power company might not know it's still there. 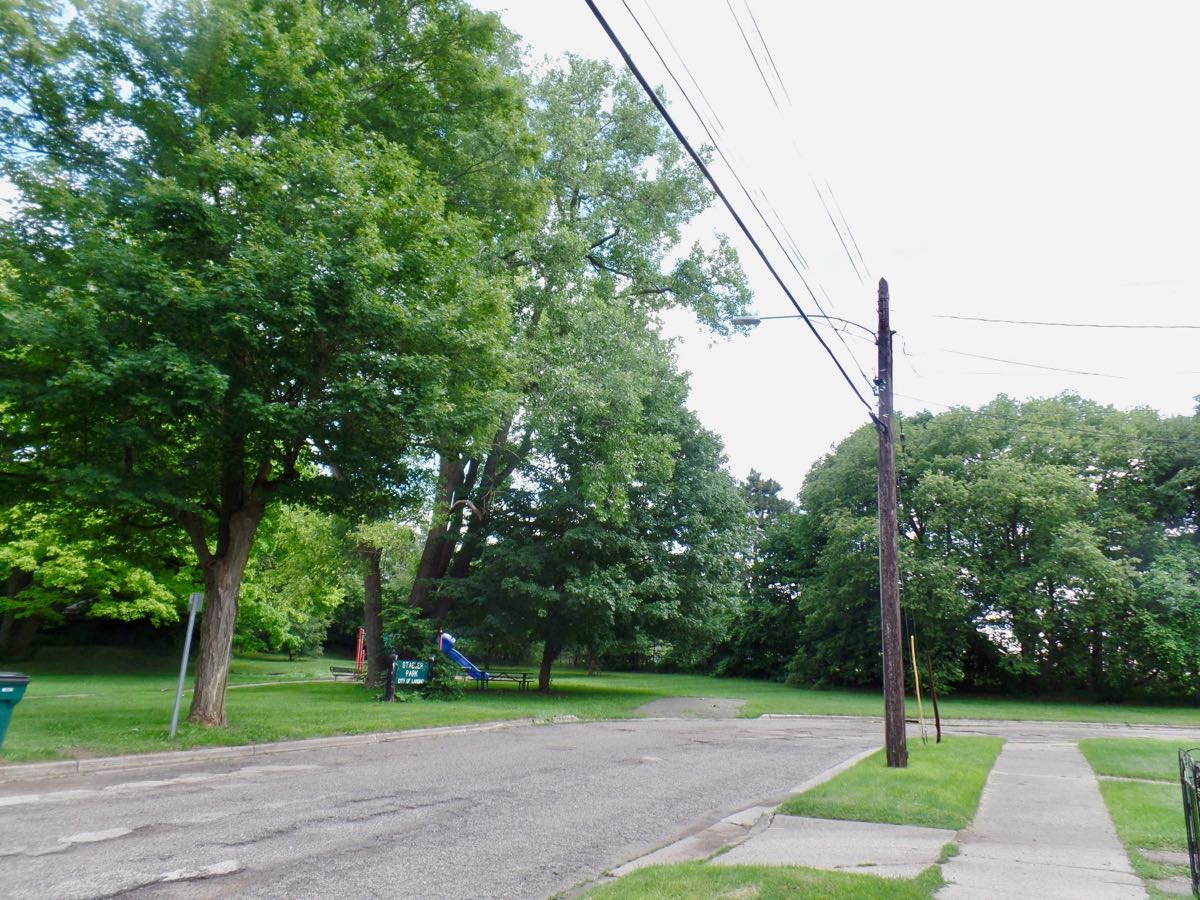 Stabler Park, which used to be a much bigger and more substantial park before they put the Interstate in. The city bought a bunch of other properties to make local parks so that the total parkland Little arc of a street that's now called Lathrop and that we suspect was something else before the Interstate was put through. 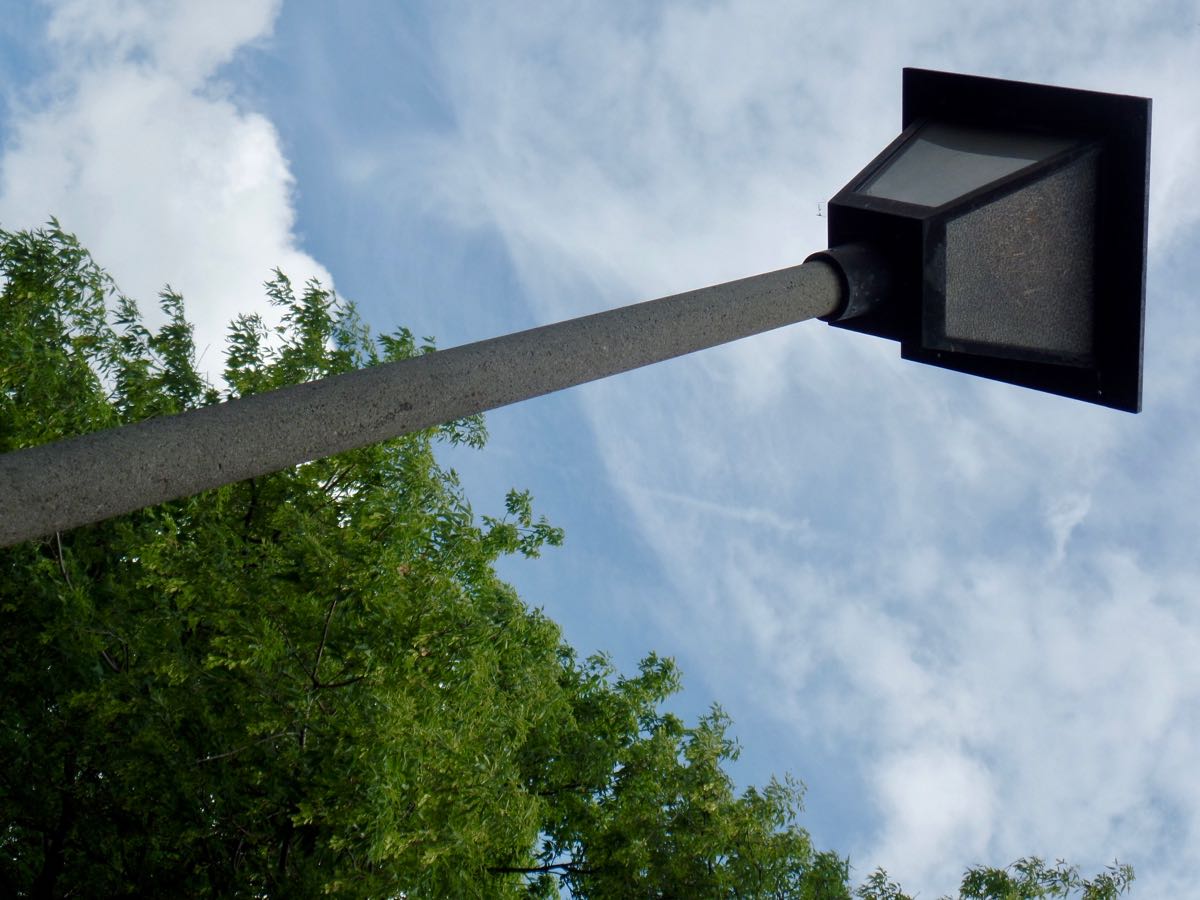 And a severe angle looking up at one of the street lights because this seemed like it would be interesting.

Trivia: For the first twelve Olympiads the sole athletic event recorded was the stade, the stadium run (a sprint of about 180-190 meters). Source: Encyclopedia of the Modern Olympic Movement, Editors John E Findling, Kimberly D Pelle.