In other news about stirring air around in our house: for a couple years now we've agreed that the window fan in the dining room is great and we should get more. This summer we finally did. I put a window fan in the bathroom, as one of the two upstairs windows that can be usefully opened (our bedroom has a window air conditioner, so we'd rather use that). I think that this has helped our house circulate and particularly toss warm air out. But we haven't had a true heat wave since putting that in so it's hard to be sure.

We also have a second window fan that's earmarked for the kitchen. We haven't set that up yet, partly because it hasn't been so desperately hot as to need it. Partly because I'm not sure where to put the plants that line the windowsill there. But we keep thinking how really really good it should feel to have a continuous driven flow of air from outside to kitchen to dining room to outside again. Now that you're thinking about it, don't you agree?

Now on to the Silver Balls in July tournament! I didn't take as many photos of the place as I had on Monday because, well, I was playing and didn't want to distract myself or other people. The building itself didn't change appreciably from one day to the next either. But here we go, some pictures of our first, unofficial, tournament. Not pictured: the DJ with the live music and the dancing and all on the first floor, or how hot it was on the second floor. Told you all it was a small tournament. The trophy

bunny_hugger had prepared that day sits on the right. The New Pinball League Box --- I got a plastic bin last year, part of cleaning up and consolidating a bunch of cardboard boxes --- got its first use. We had earplugs available for if the DJ ended up too loud. The QR code thing is apparently what the bar is doing instead of having menus where there's nothing we want anyway. 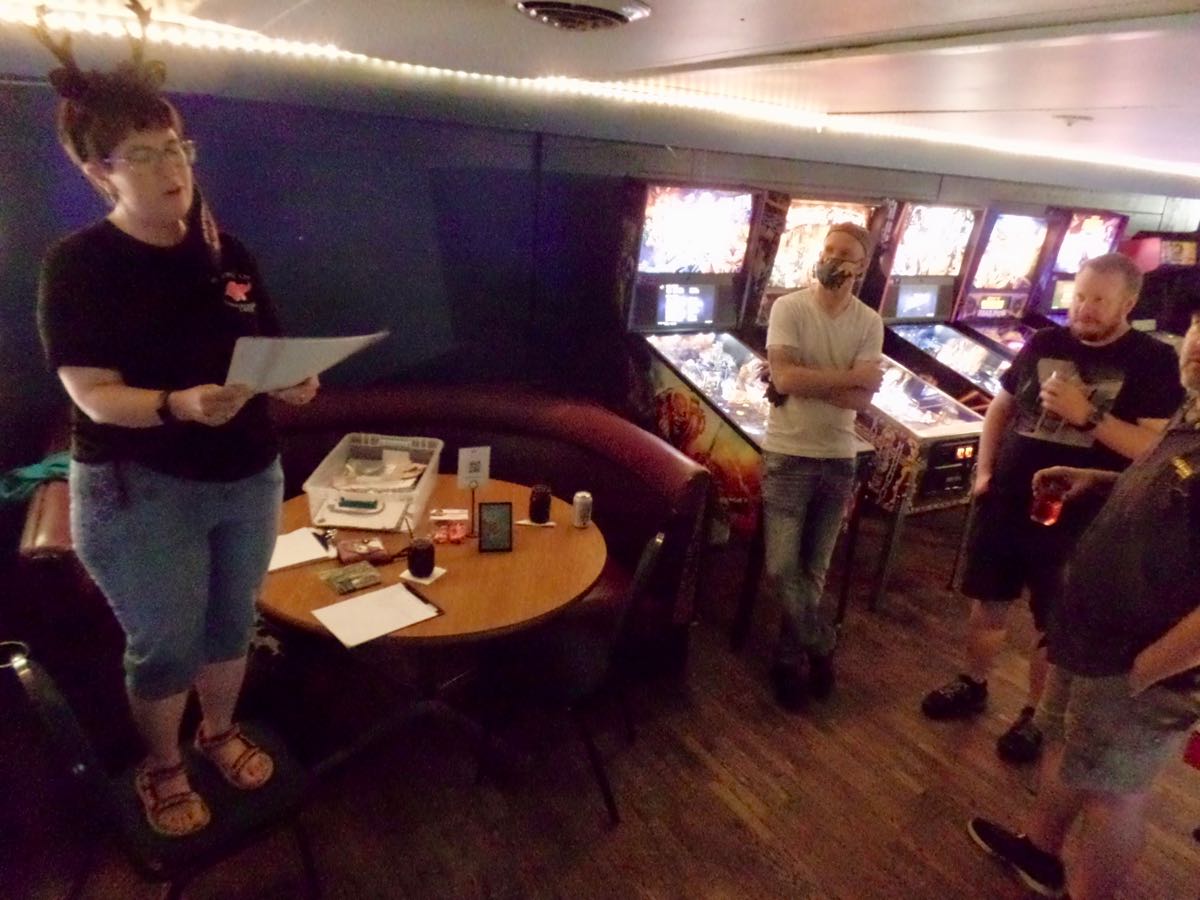 bunny_hugger standing on her chair to give instructions to everyone; you'd barely know there had been a 16-month gap. 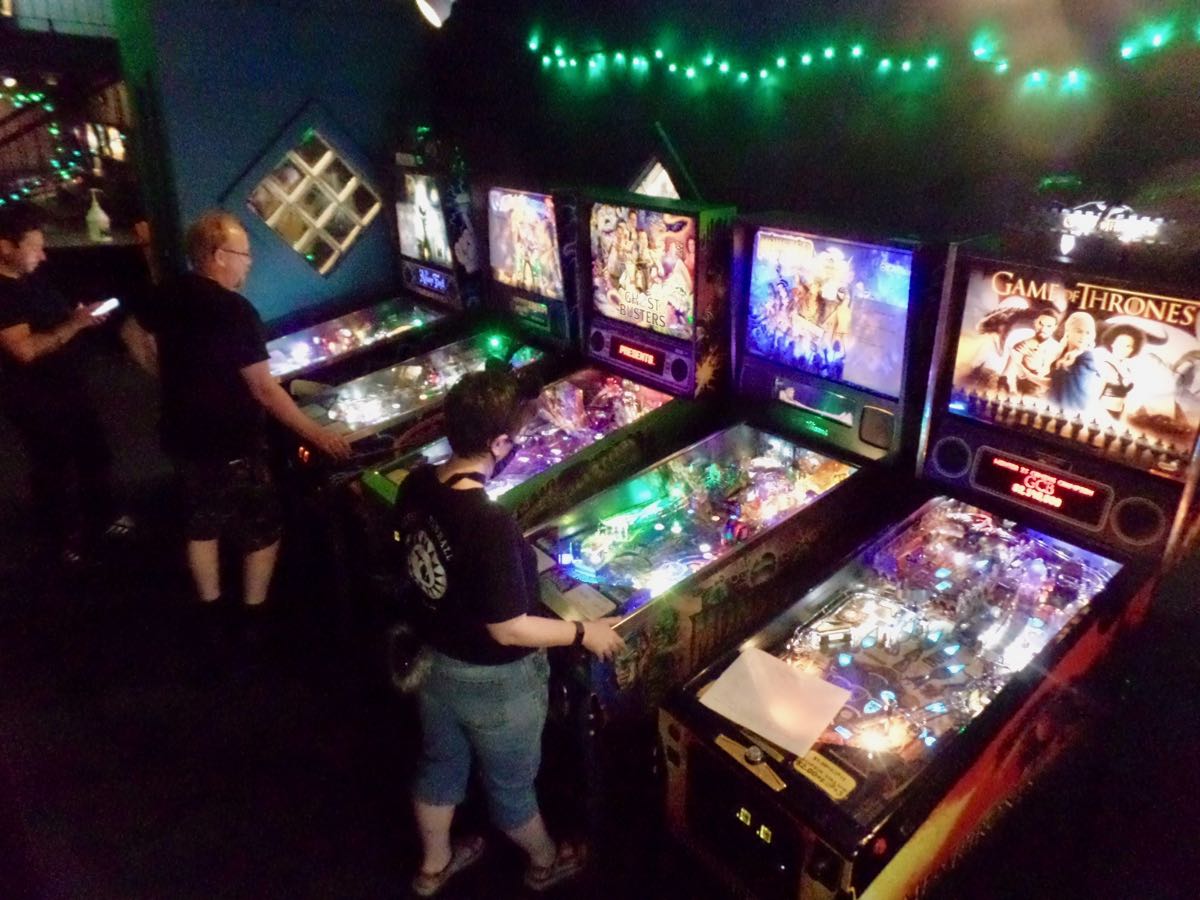 bunny_hugger working on the pin-golf objective for Monster Bash only this time it's for real. Two games down is a team working on Medieval Madness too. You might be able to make out the objective sheets on the pinball backglasses, but the light is working against you. 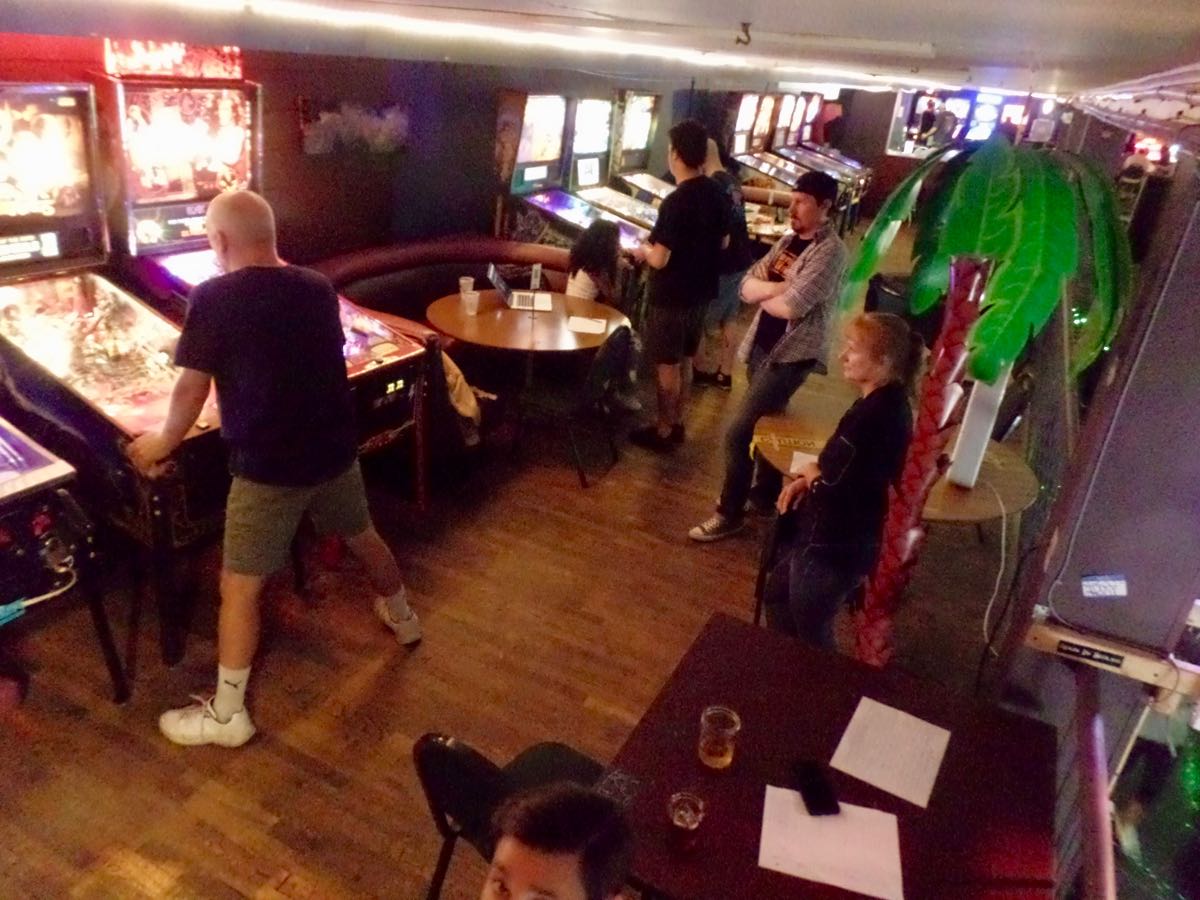 Seems like old times. The objective on Lord of the Rings was collecting 5,000 souls, which qualifies the Two Towers Multiball. If you can get one particular game mode going it's pretty easy; if you can't, it's blasted tedious. Anyway, check out the fake palm tree the bar's put in. 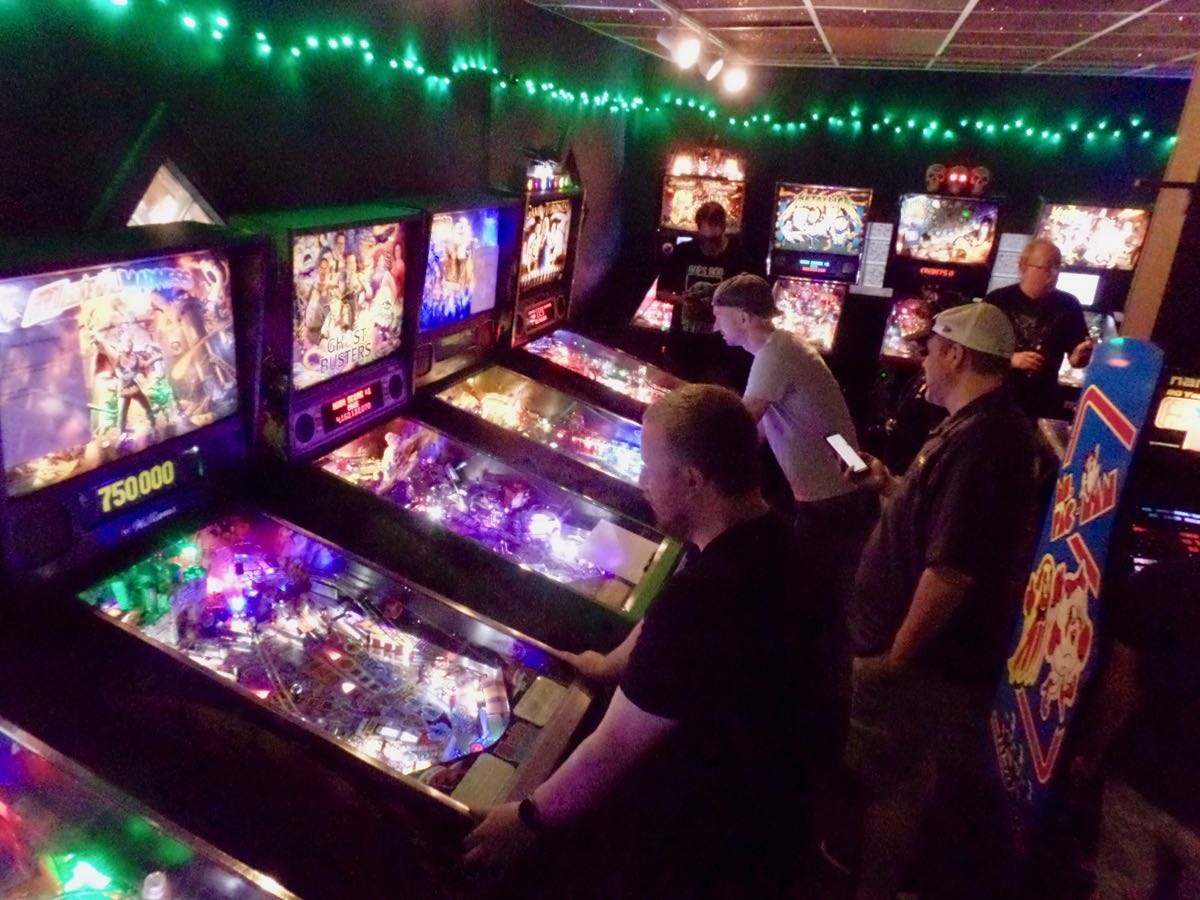 And back to the alcove here, where the league began long ago. Medieval Madness was one of the original set of games we'd had. Monster Bash is one of the oldest there too, and that's why we picked those tables as part of the course. 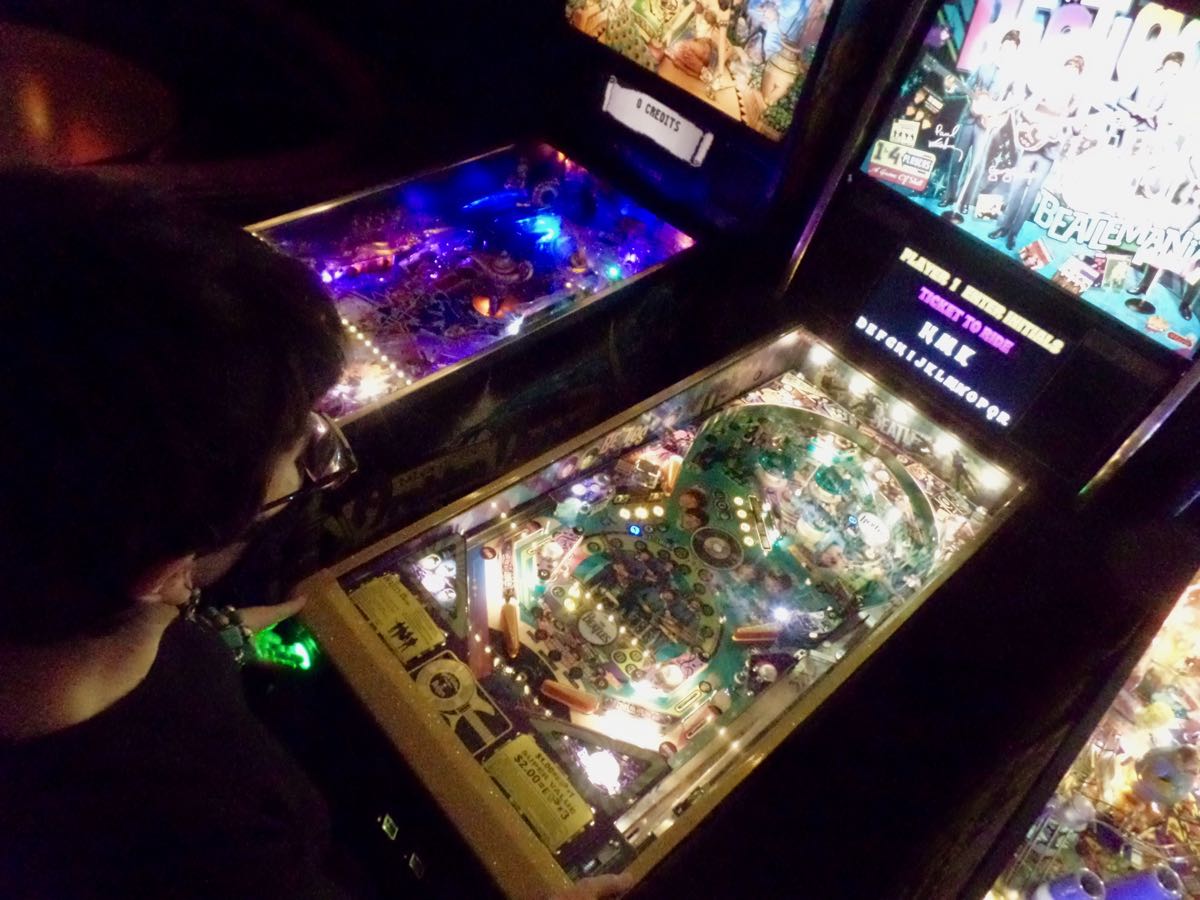 Not part of the course, but,

bunny_hugger getting to record her achievement in The Beatles, the first game we played just for the fun of it.

Trivia: During the on-mission checkout of the Apollo 15's Lunar Module the astronauts discoverd the glass over the range/range-rate gauge was broken, letting its helium atmosphere escape. Ground testing qualified the meter to work in ordinary spacecraft atmosphere, and the crew vacuumed the broken glass out of the gauge. Source: Apollo By The Numbers: A Statistical Reference, Richard W Orloff. NASA SP-4029. Does seem to inspire the question of whether this protective helium atmosphere for the gauge was all that necessary, doesn't it? Maybe it's something where it's a useful protection during the long time the gauge sits around not being used and since they were only going to need it to last four more days they could let it slide.